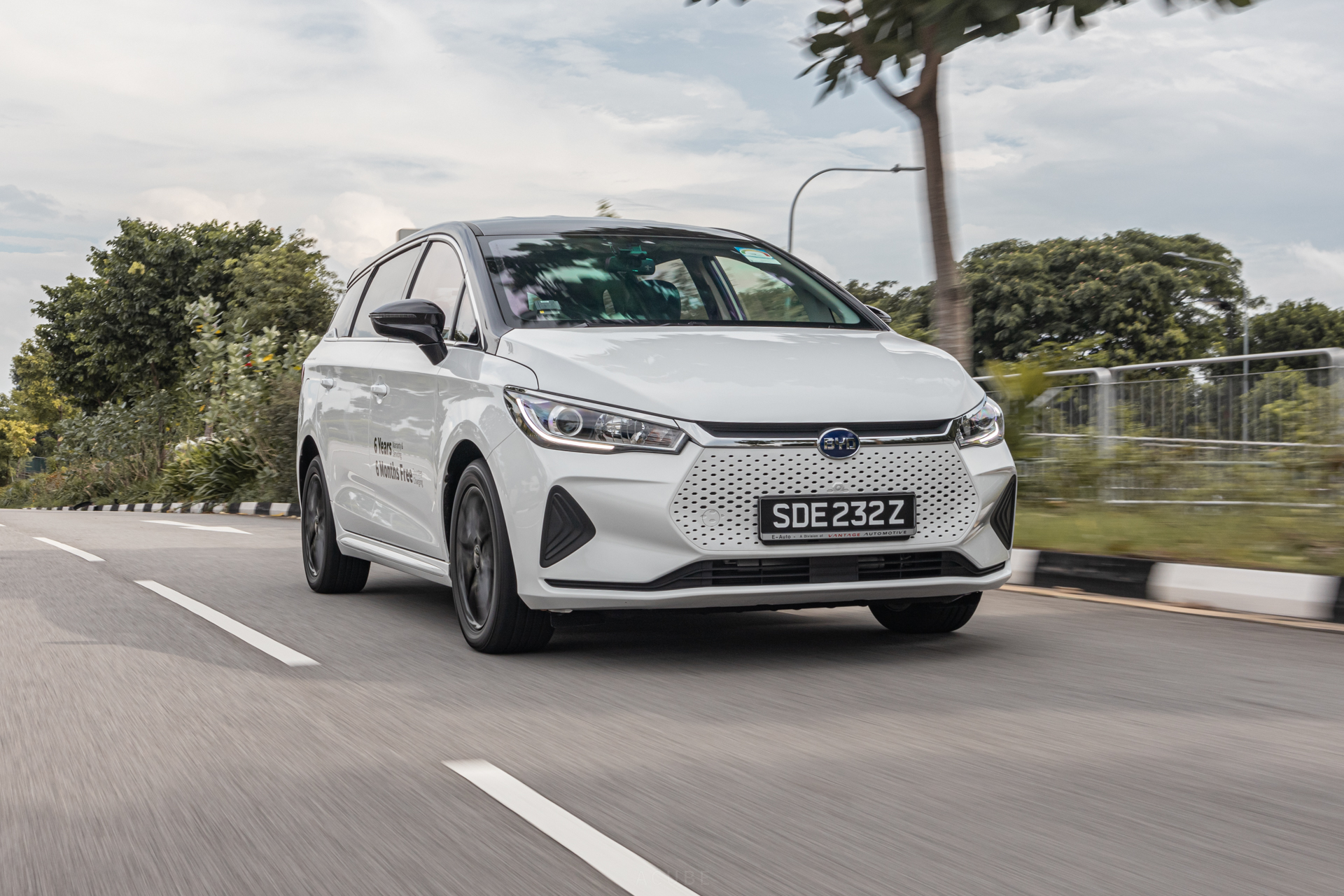 Everyone has words that stir up thoughts and feelings, and I like to think that the term "Advance" in the BYD e6 ADVANCE Edition signifies the progress of electric mobility in the coming years.

If you think you've seen us write about this before, your eyes aren’t playing tricks on you. This is the BYD e6 ADVANCE Edition, an upgrade to the ubiquitous “regular” e6! So how will the e6 ADVANCE Edition be any different?

The previous generation was high riding and blocky looking, with aesthetics that weren’t exactly appealing. But with the new e6 ADVANCE Edition, its sleek MPV design looks so different that you might even think they weren’t built by the same company. 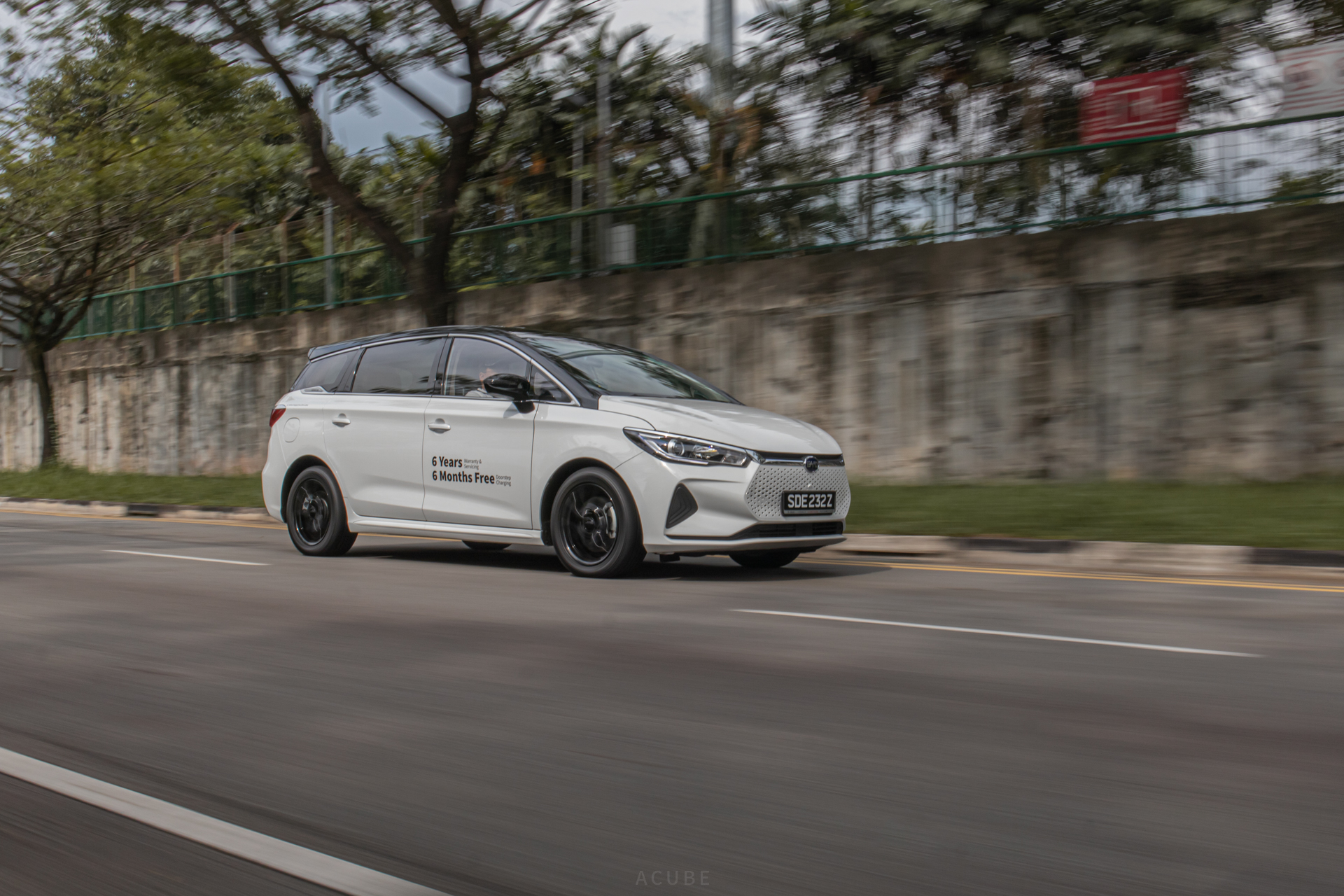 The new look brings a sharper front end, bigger grille, and new headlights that blend aggression and sleek design. The headlights are further accentuated with an LED strip for daytime running lights, subtly reinforcing the aggressiveness of the new design.

The bodywork features distinct creases and sculpting, with one running down the doors on each side, while a long and pronounced line runs from the edge of the headlights all the way to the side markers on the taillights. 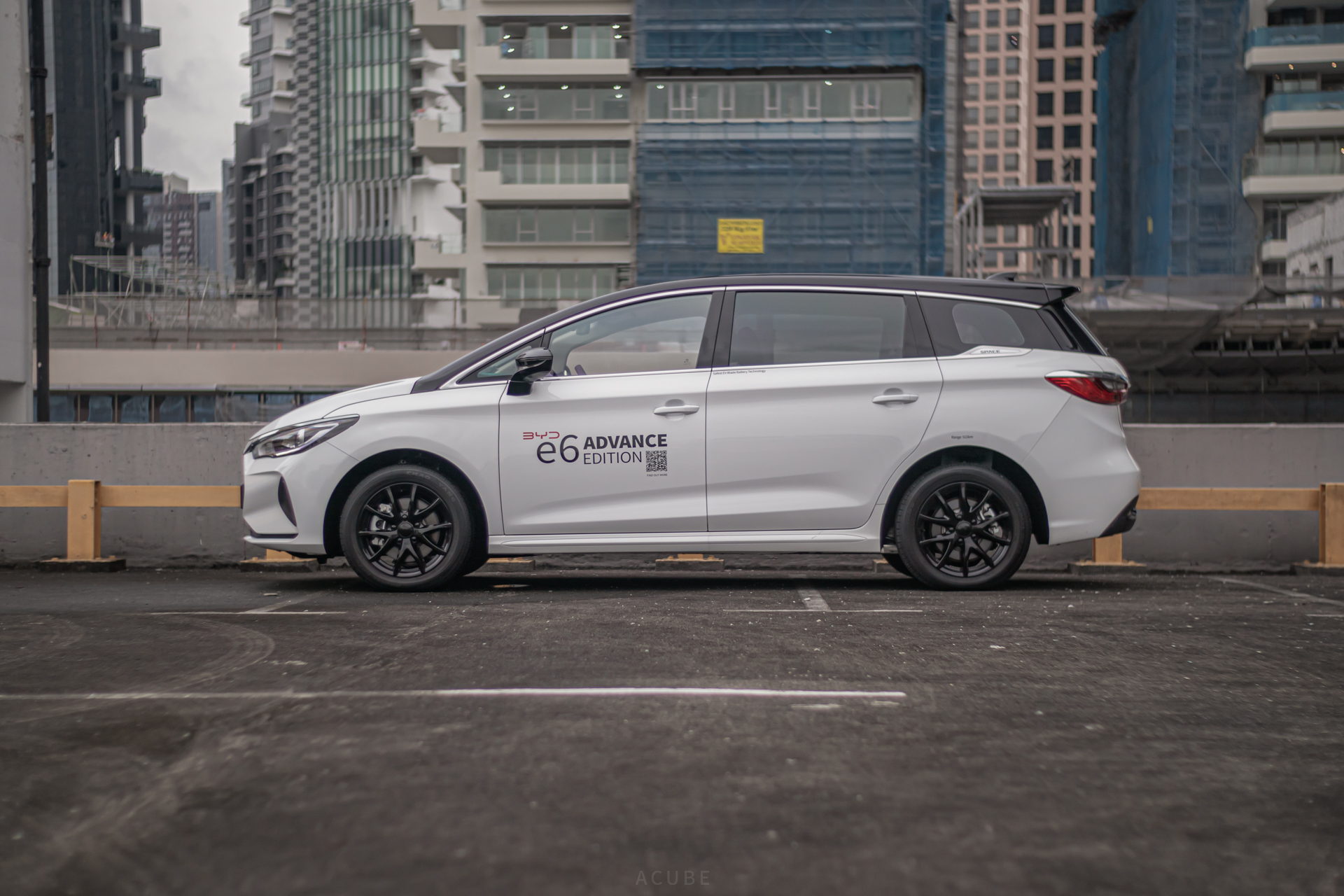 Ordinarily, a two-tone paint job exists only at the highest echelon of luxury cars. The e6 ADVANCE Edition turns its nose up at the statement with a white body and black roof, giving visual differentiation between both segments of the body, and a welcome change from the usual solid colour. The wheels also receive the same dark coat of paint, providing a second contrasting element to the white painted body.

The Interior and All That Space

More often than not, most cars nowadays are best suited to seat just 3 passengers (excluding the driver), and whoever draws the short straw will have to suffer the discomfort that comes with the middle seat. 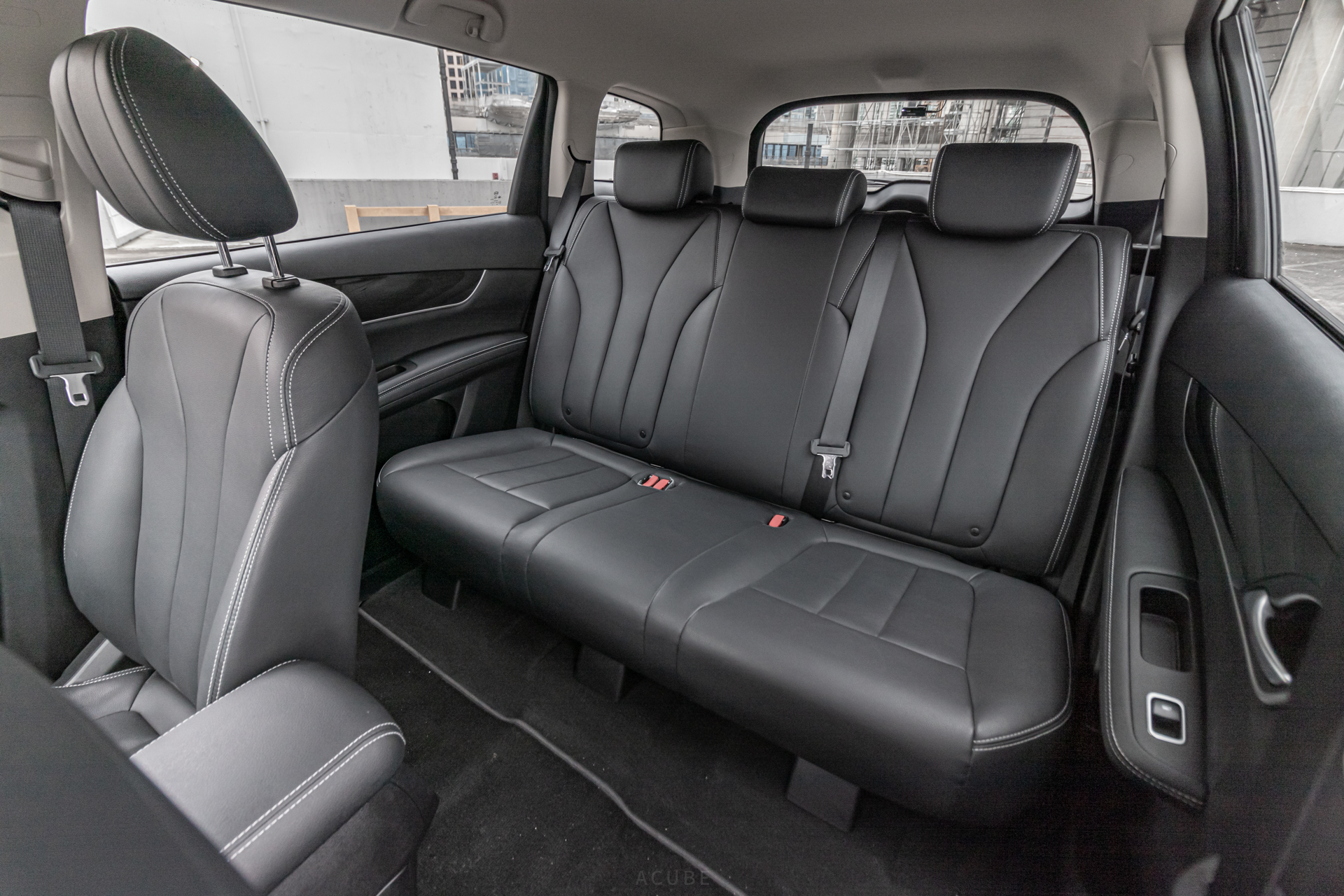 Here, the rear bench will fit three people comfortably, with even the middle seat being fairly comfortable. Same goes for the front seats, for even after spending an extended period of time driving around for errands, I was still quite comfortable and could drive on with minimal complaints.

Admittedly, the interior is a mixed bag. Firstly, its clean design makes for a minimalist cabin. The traditional gear shifter is replaced with a rotary knob, with two rows of buttons for functions like the hazard lights, drive mode, and regenerative braking intensity. 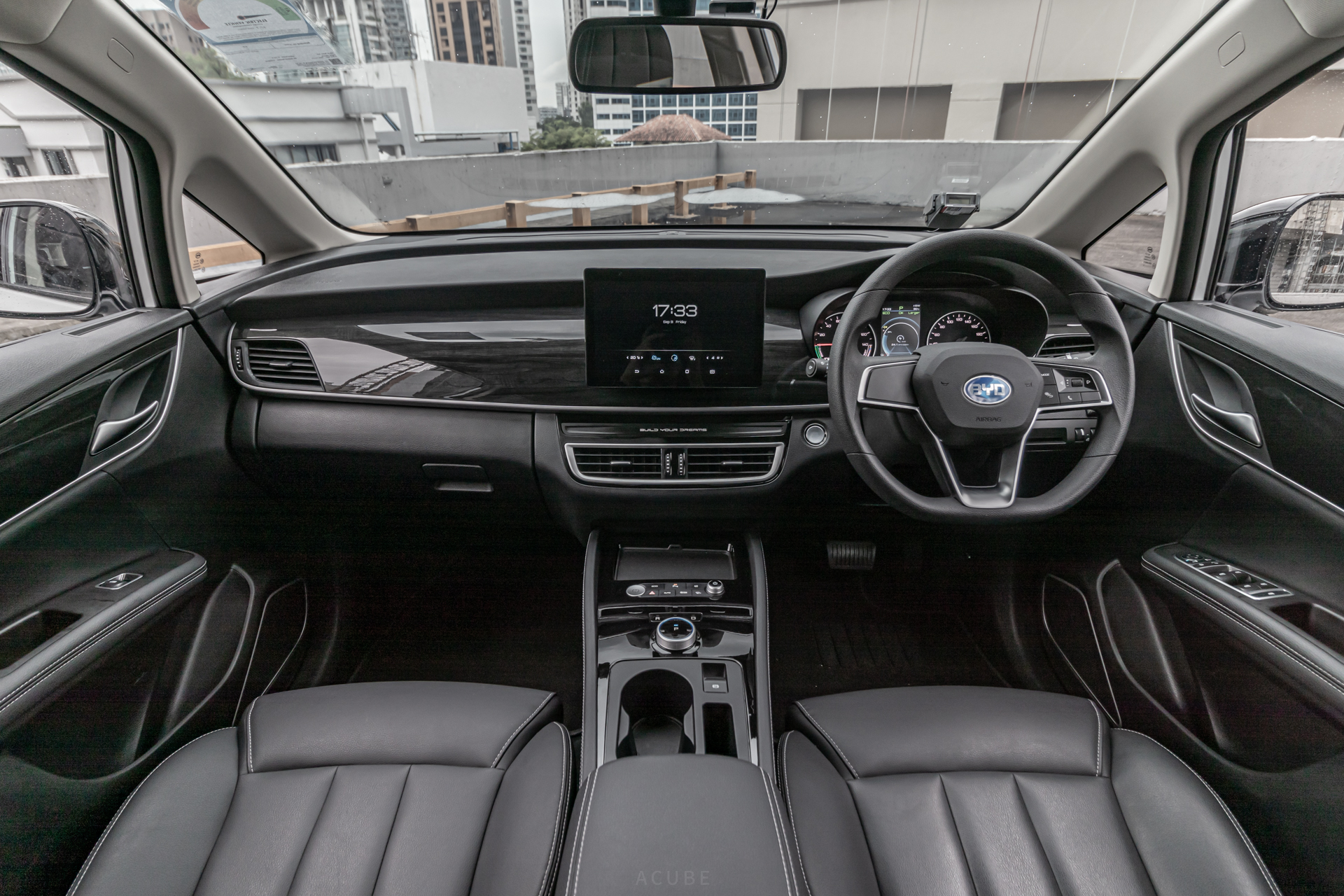 The 10.1-inch touchscreen takes centre-stage on the dashboard, with all entertainment options contained and controlled within. Responsive to the touch with easy to read graphics, it can also be (physically) rotated to either landscape or portrait positions, depending on your preference.

A peculiar touch is how the button to turn on or off the HVAC system is on the lower row of buttons, while the actual temperature and fan speed controls are at the base of the touchscreen. While some might question why BYD did this, I’d rather regard it as a charming little quirk. 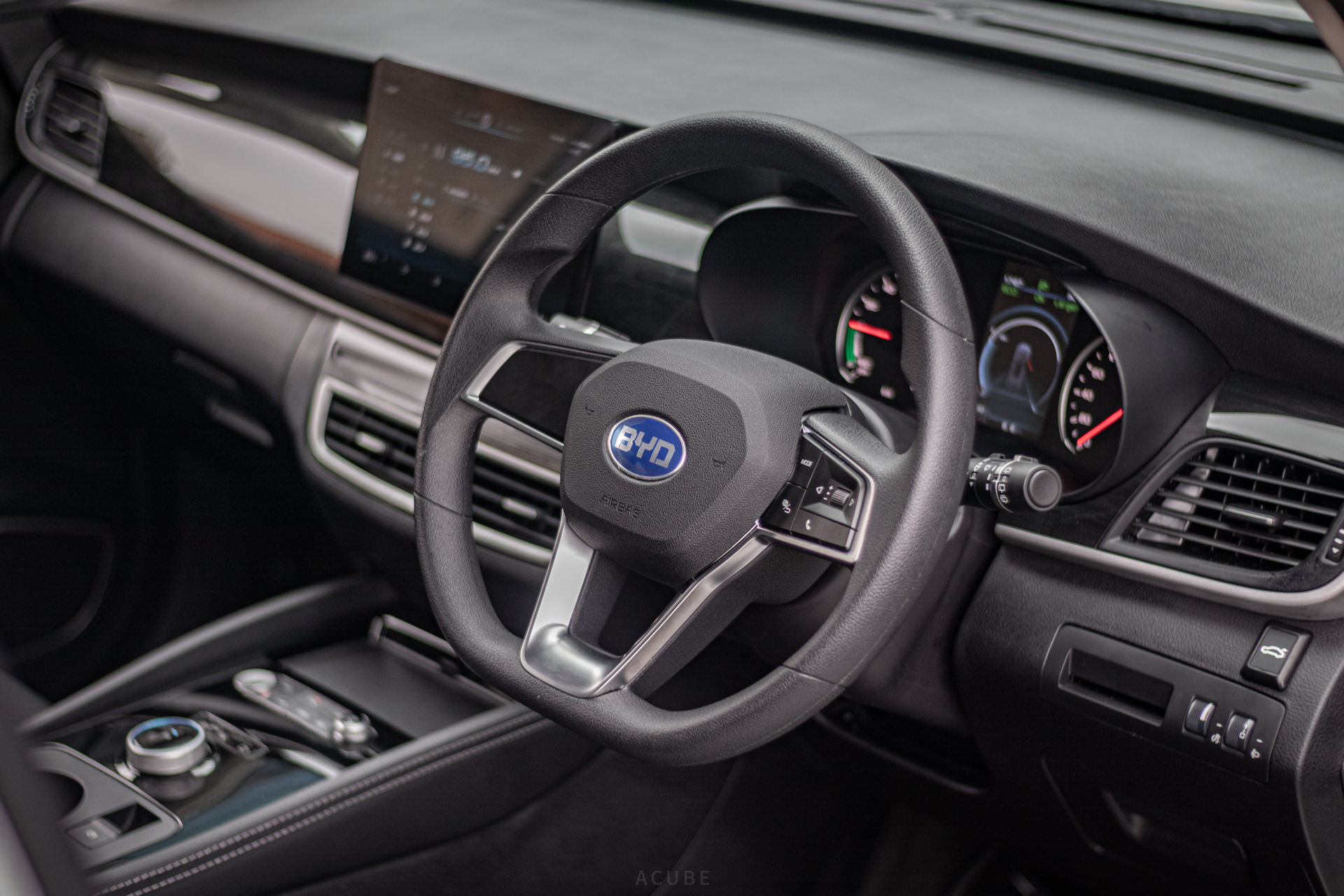 Hard black plastics and black leatherette dominate the interior, together with black wood-look trim pieces, and black vinyl-like material for the steering wheel. If I’m being honest, the interior colour wasn’t very exciting. But you can be assured that these materials will be hard wearing, easy to clean, and could very well last the entire COE cycle. 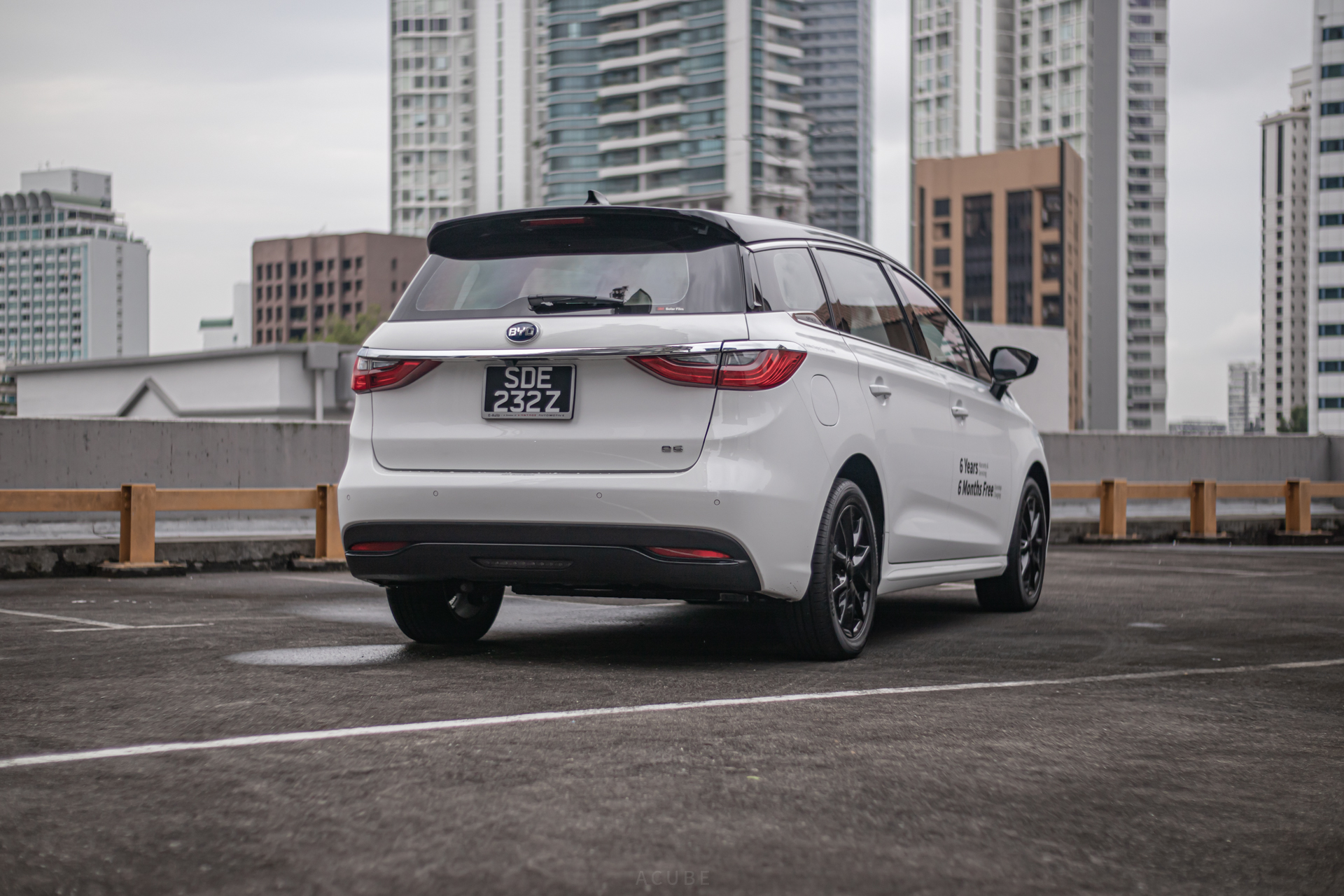 At 580 litres, carrying capacity is generous, with the boot being both wide and deep, together with an electric tailgate, as well as a button to open said tailgate via a button in the cabin. Strangely, for a car like this, the rear seats can’t fold down to expand the boot capacity, as they are firmly bolted in place.

Fitted with BYD’s new Blade Battery, power is drawn from a 71.7kWh battery, with figures standing at 94bhp and 180 Nm of torque, and weight at 1930kg. While BYD doesn’t provide a century sprint timing, our own tests showed a consistent 15.5 seconds. 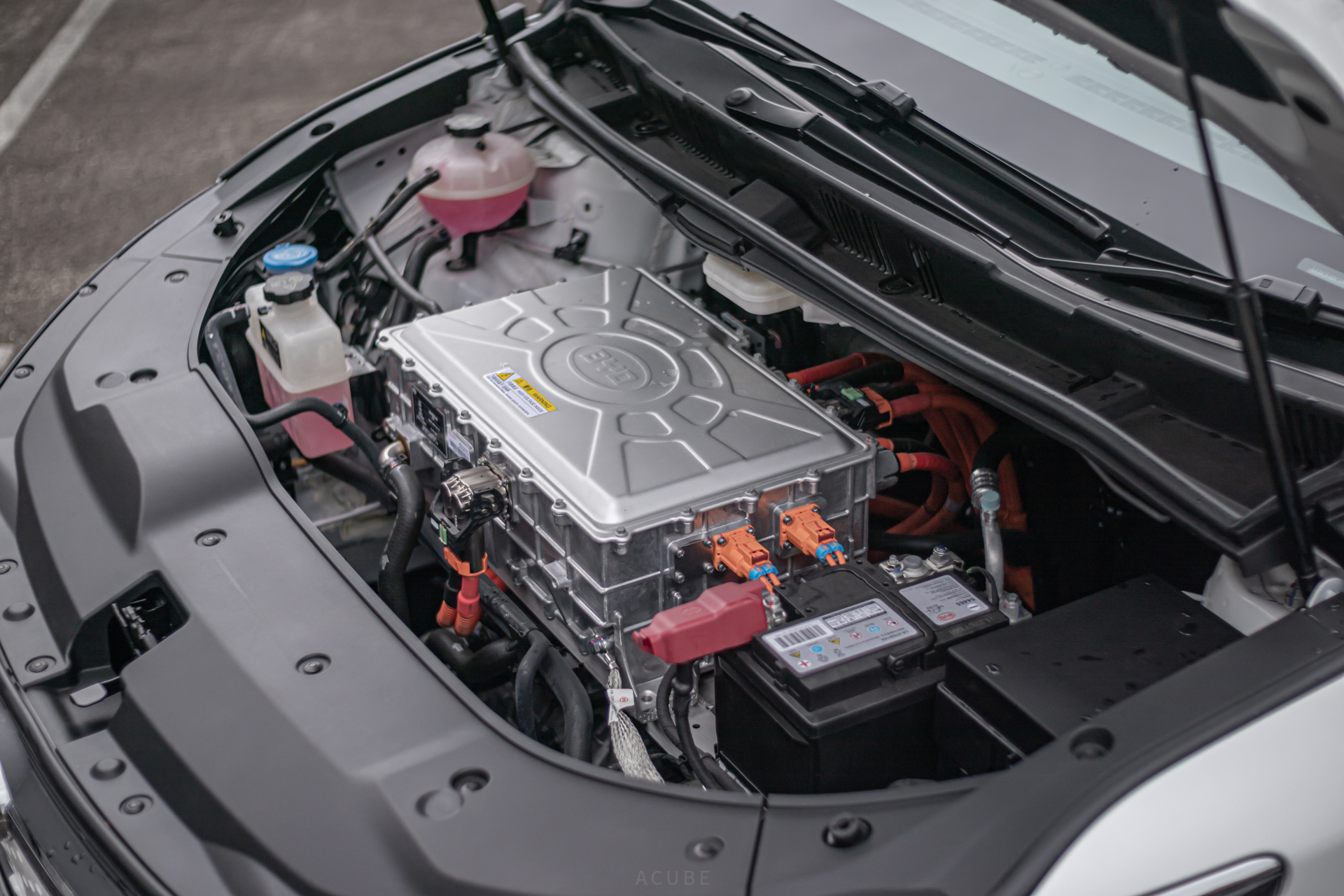 With a maximum DC charging rate of 70kW, charging up a low battery should take 40 minutes to an hour. Expect to take much longer if using an AC charger though, as the e6 ADVANCE Edition can only charge at a max of 6.6kW.

You might think that with low power numbers and a century sprint time over 50% slower than the current 100m record, this car would be a bore to drive. I did too. That is, until I took it through some corners. I know, this is not a handling machine, so tight and twisty bends aren’t its forte. 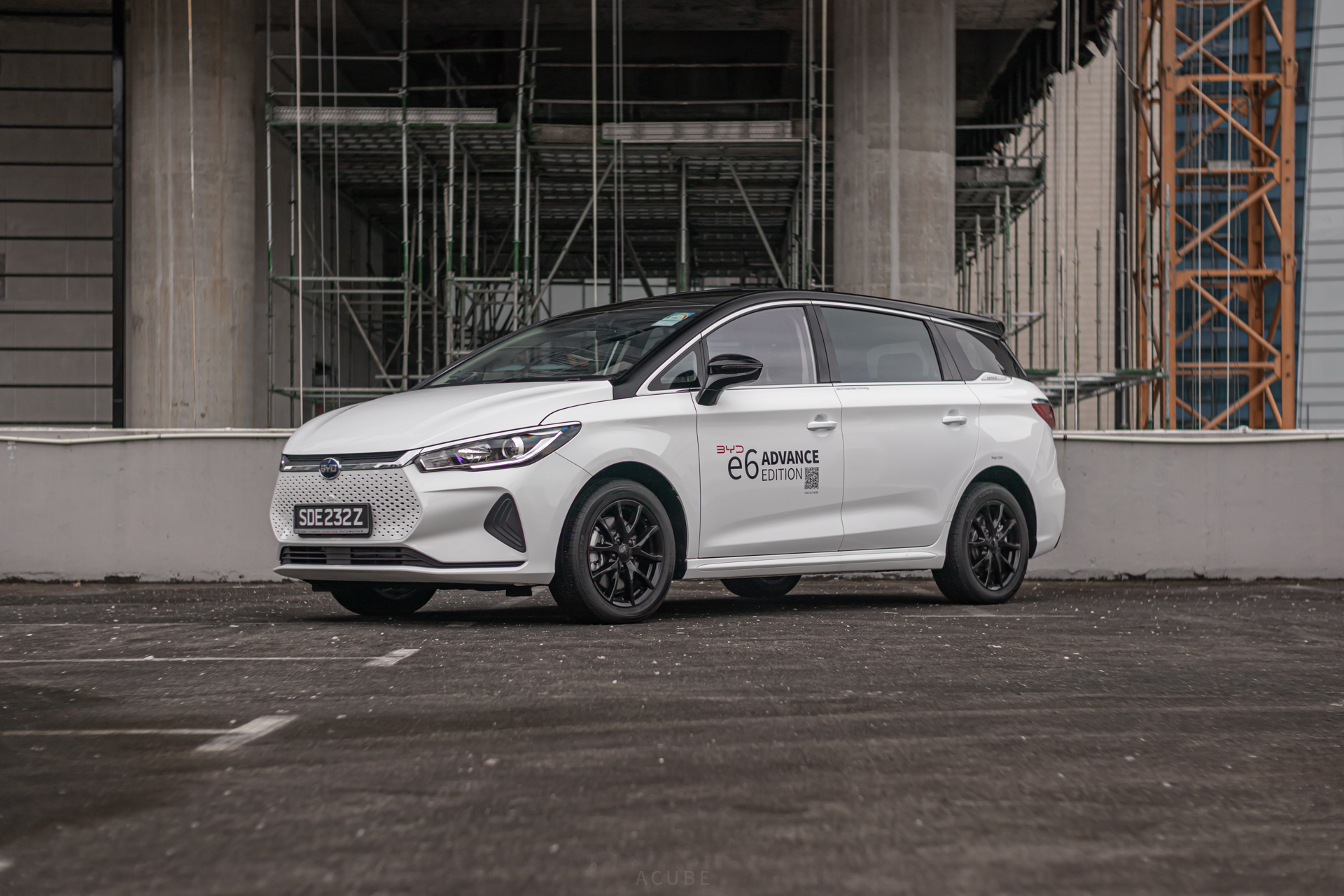 But take the car through more sweeping bends and keep the momentum up, and it suddenly shows its capability. With a low centre of gravity, it is stable all the way through the corner. Granted, the vague steering and eco-biased tyres aren’t ideal for aggressive driving, but these challenges only add to the fun of driving the e6 ADVANCE Edition spiritedly.

How I drove unfortunately reflected in my power consumption and economy numbers, as I got an average of 20.2kWh/100km. However, as previously seen in the “regular” e6, if driven sensibly, you can achieve the manufacturer's claimed range of 522km.

It might not be the most brisk electric car on the market, or have the most evocative design. But it makes up for it with its own charm, quirks and immense practicality.

This might be the most functional and well-priced electric car in its category currently on sale, with even a local taxi company putting their money where their mouth is and purchasing the e6 for their fleet. If a taxi company can put its trust into a platform like this, what’s stopping you from getting an e6 ADVANCE Edition for yourself? 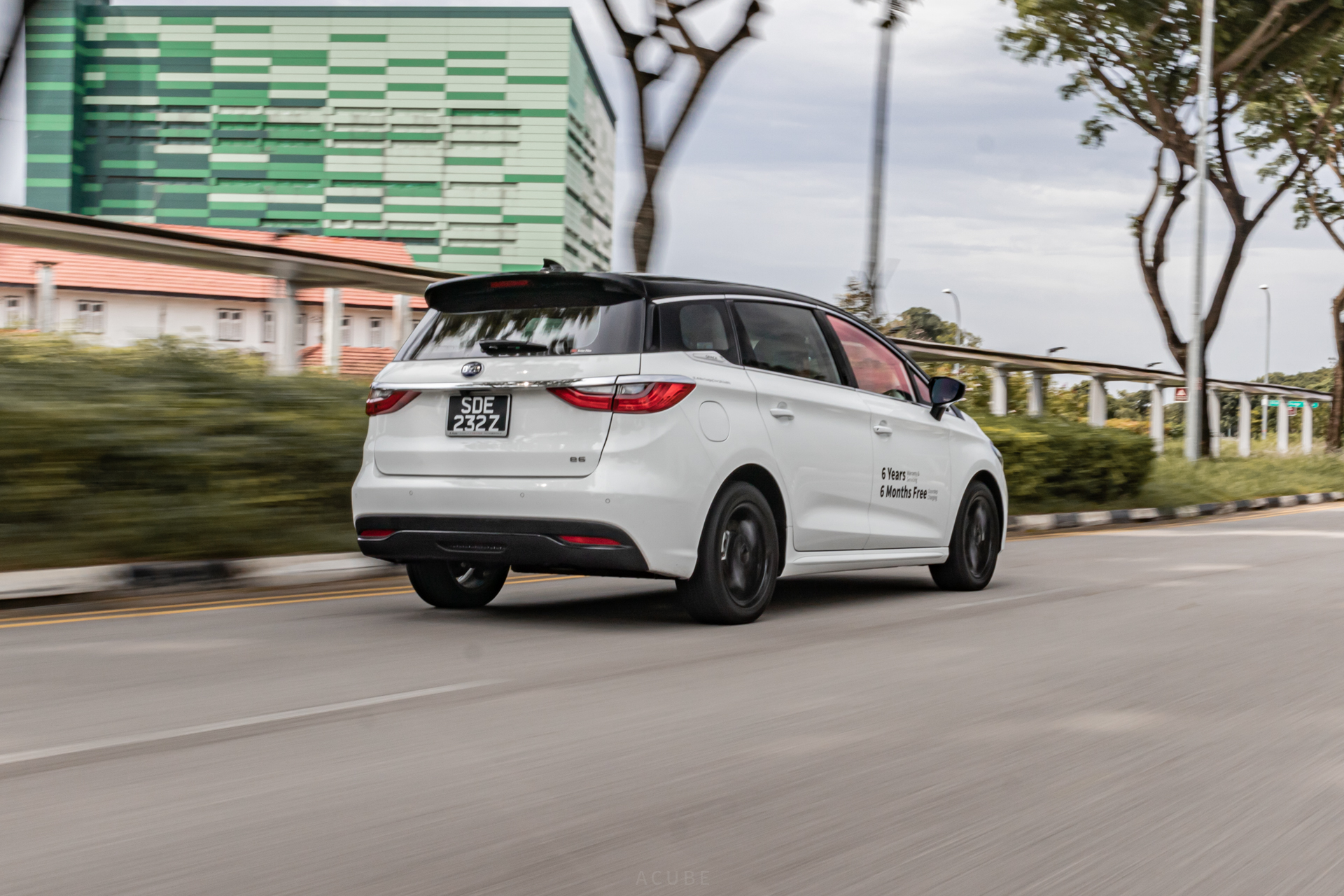 To be fair, the electric car lifestyle will take some getting used to, given the convenience of the infrastructure for combustion engine vehicles. But with improvements in the local charging network, it could very well be up to you to take the next step in this ADVANCE-ment towards electric mobility.