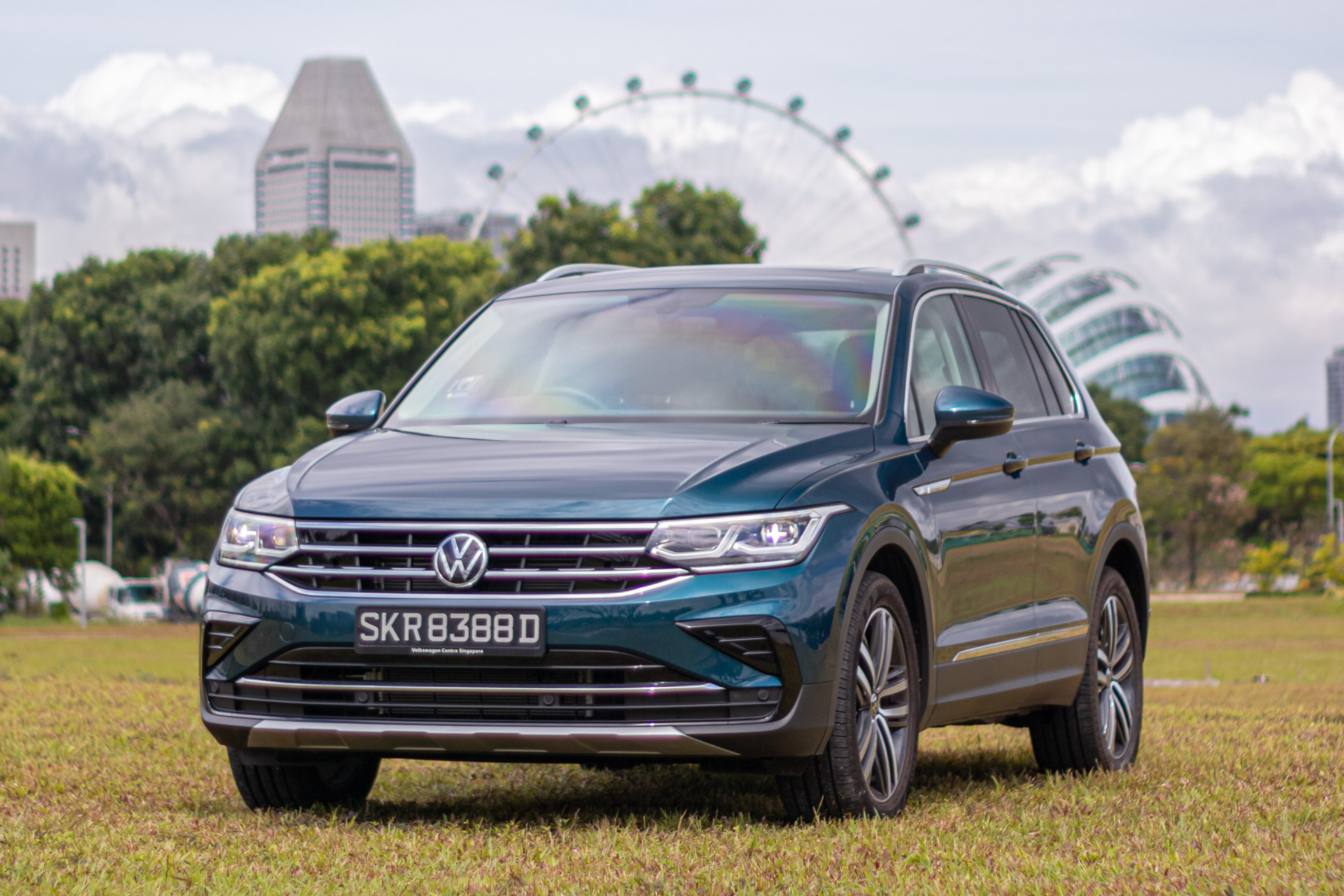 The Volkswagen Tiguan may present itself as an SUV, but it hides a secret. Underneath that SUV bravado, you’ll actually find the same MQB platform that has been used in many other VW-Audi Group (VAG) hatchbacks.

If you’re really pedantic, then yes, technically the Tiguan does not use the exact bones that you’d find in say a Volkswagen Golf, or a SEAT Leon. Those cars utilise the MQB-Evo platform.

Whereas the Tiguan uses the MQB-A2 architecture, which itself is an evolution of the underpinnings that was also utilised by the Audi Q2. But this car-based platform does pay dividends to its sure-footedness.

So, Is The Tiguan Just A Scaled-Up Hatchback?

As controversial as this opinion may sound, the Tiguan does exhibit hatchback-esque characteristics in some ways. Sketchy is perhaps the best adjective when describing an older SUV's approach to bends taken with a certain vigour. 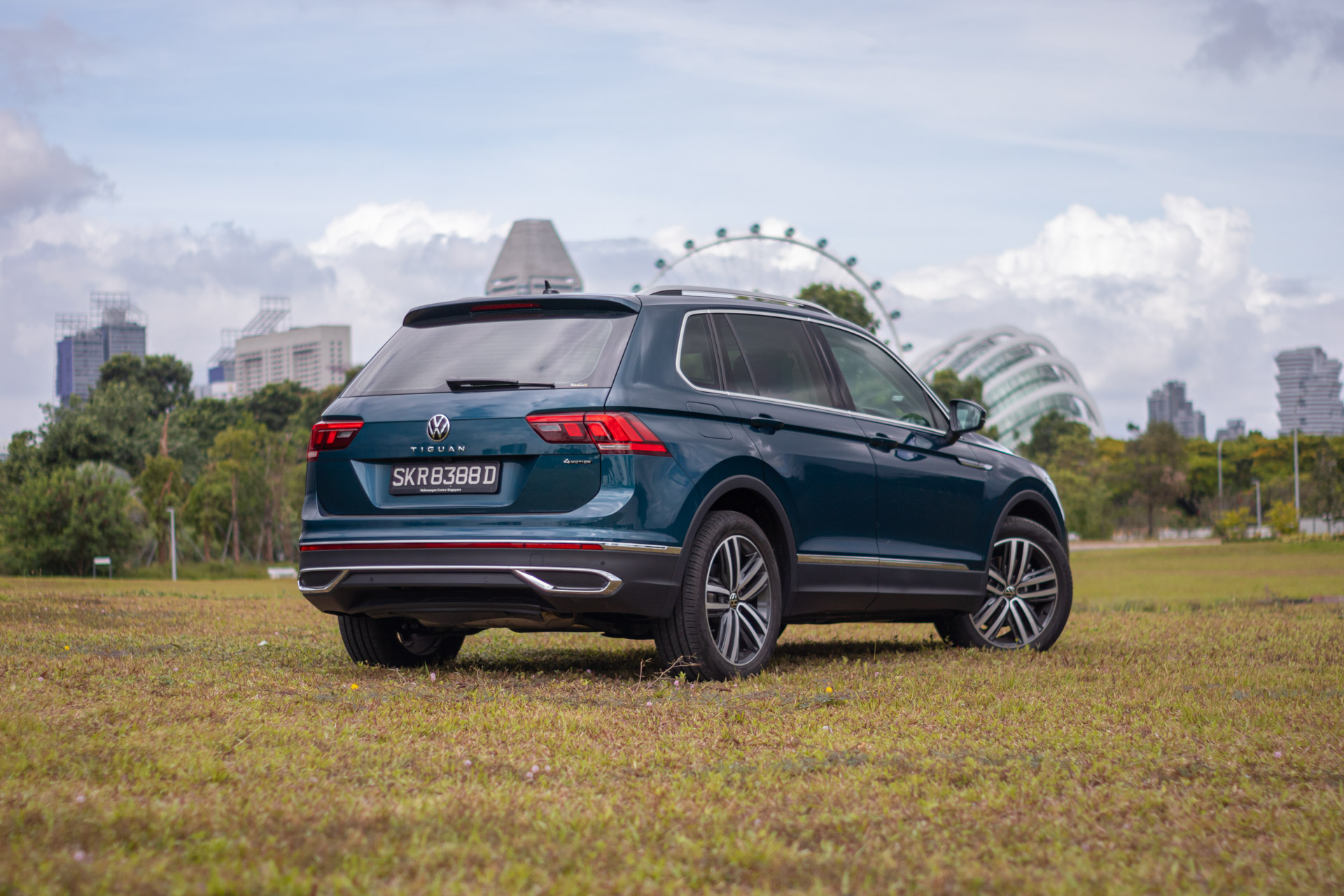 Without the archaic suspension and high centre of gravity, the Tiguan drives and feels more like a car, than a roughty-toughty offroader.

It's certainly a smart-looking car for sure. There's a restraint exercised by its stylists, as Volkswagen did not feel the need to over-design the car or adorn it with faux cues to mimic more upmarket cars.

After all, Volkswagen started out as the people’s car - it only makes sense that this ethos is followed in spirit. 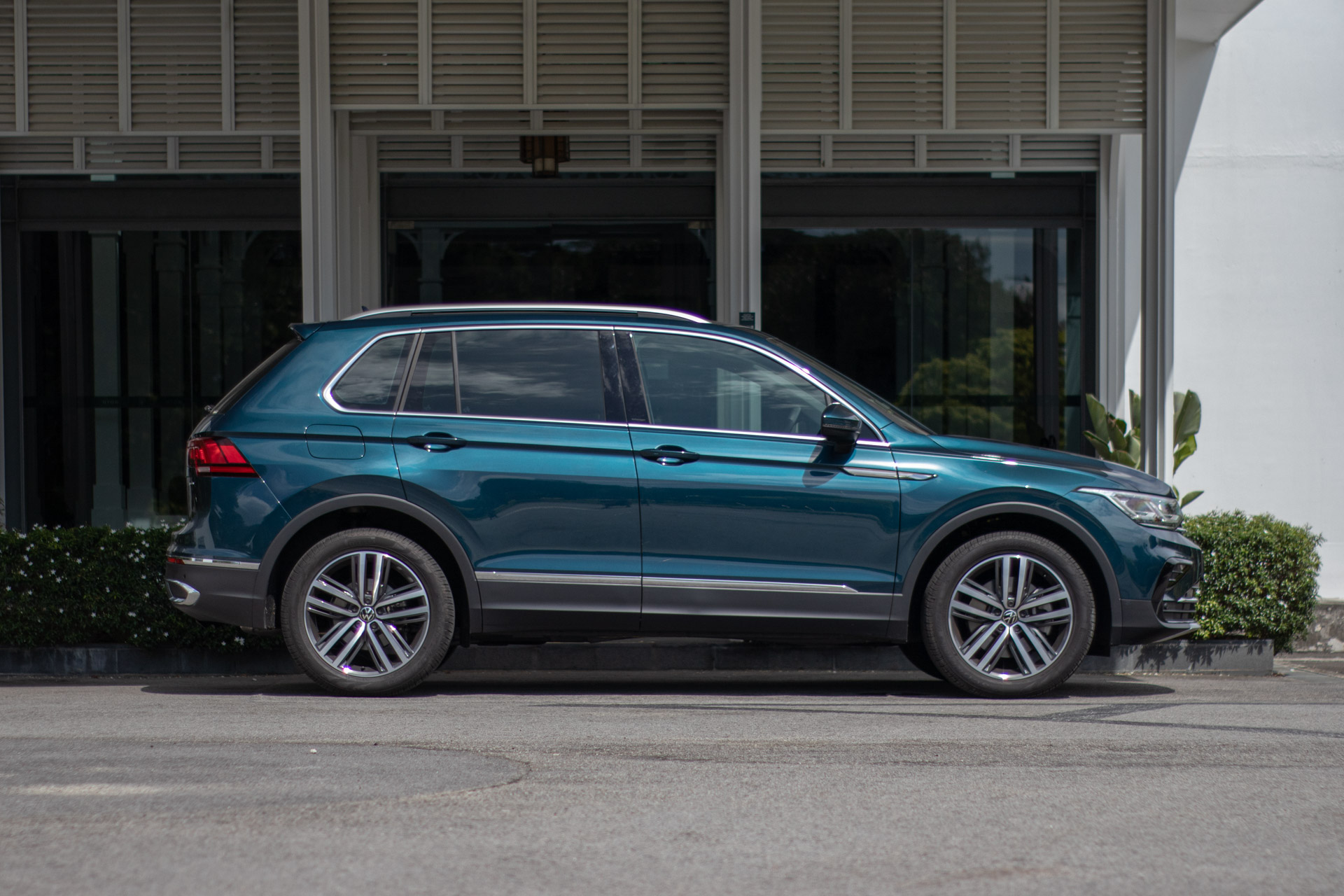 Its profile is undeniably one of a small SUV. A sharp crease sets off the car's shoulder line better against the almost-slab-sided metalwork. The wheel arch areas have also received crisp lines that help define and add a touch of some much-needed butch-ness to this area of the vehicle. 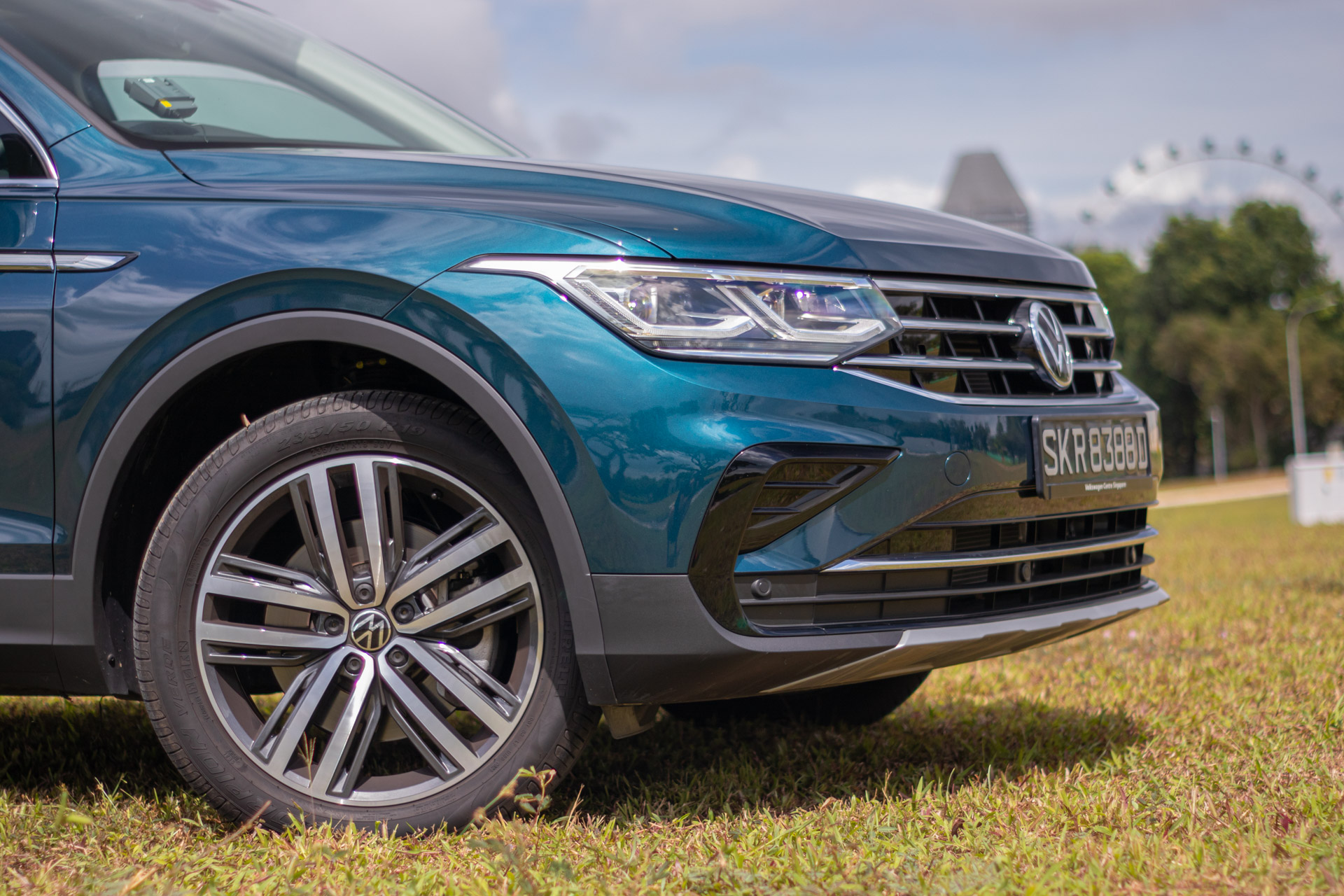 Upfront, the car wears the VW design language very smartly. It actually has a fairly large grille that spans the width of the car, though carefully placed design elements, some of which flows into the light clusters, help to disguise its true size.

The facelift also brought the rear of the Tiguan more in-line with Volkswagen’s latest models. Changes here are capped off with the new central placement of its badge.

The refreshing restraint continues on the inside. It is a well-made car, with common touchpoints trimmed in various soft-touch materials. Though lower down in the cabin, you'll be able to find copious amounts of hard scratchy plastics. A slight letdown, but it is to be expected, considering how aggressively priced the Tiguan is. 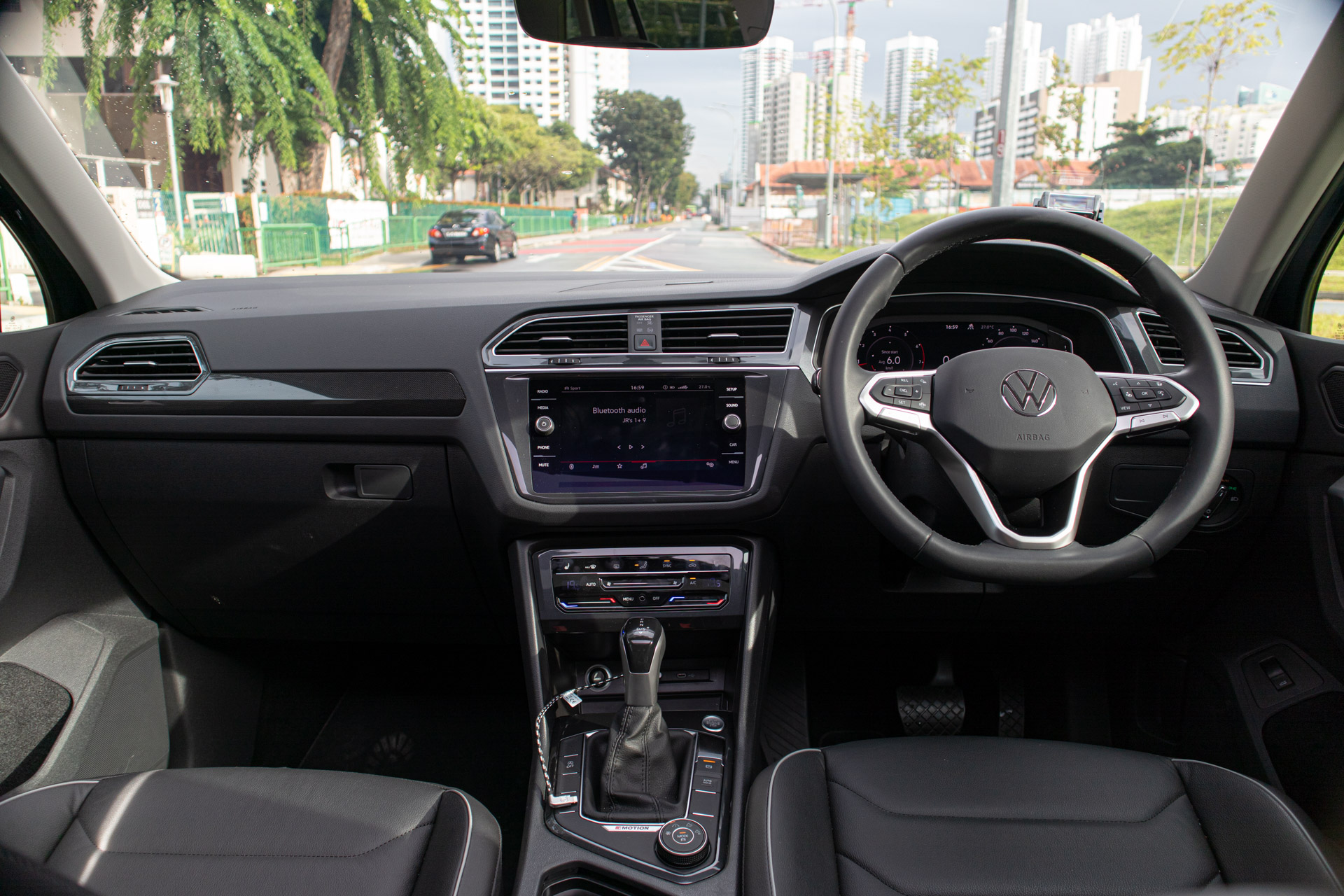 Physical switchgear is in short supply here. Aside from the steering wheel controls, and the knob for the headlights, the only other physical controls you have are the two rotary knobs on the infotainment screen, and a drive mode toggle located beside the gear stick. 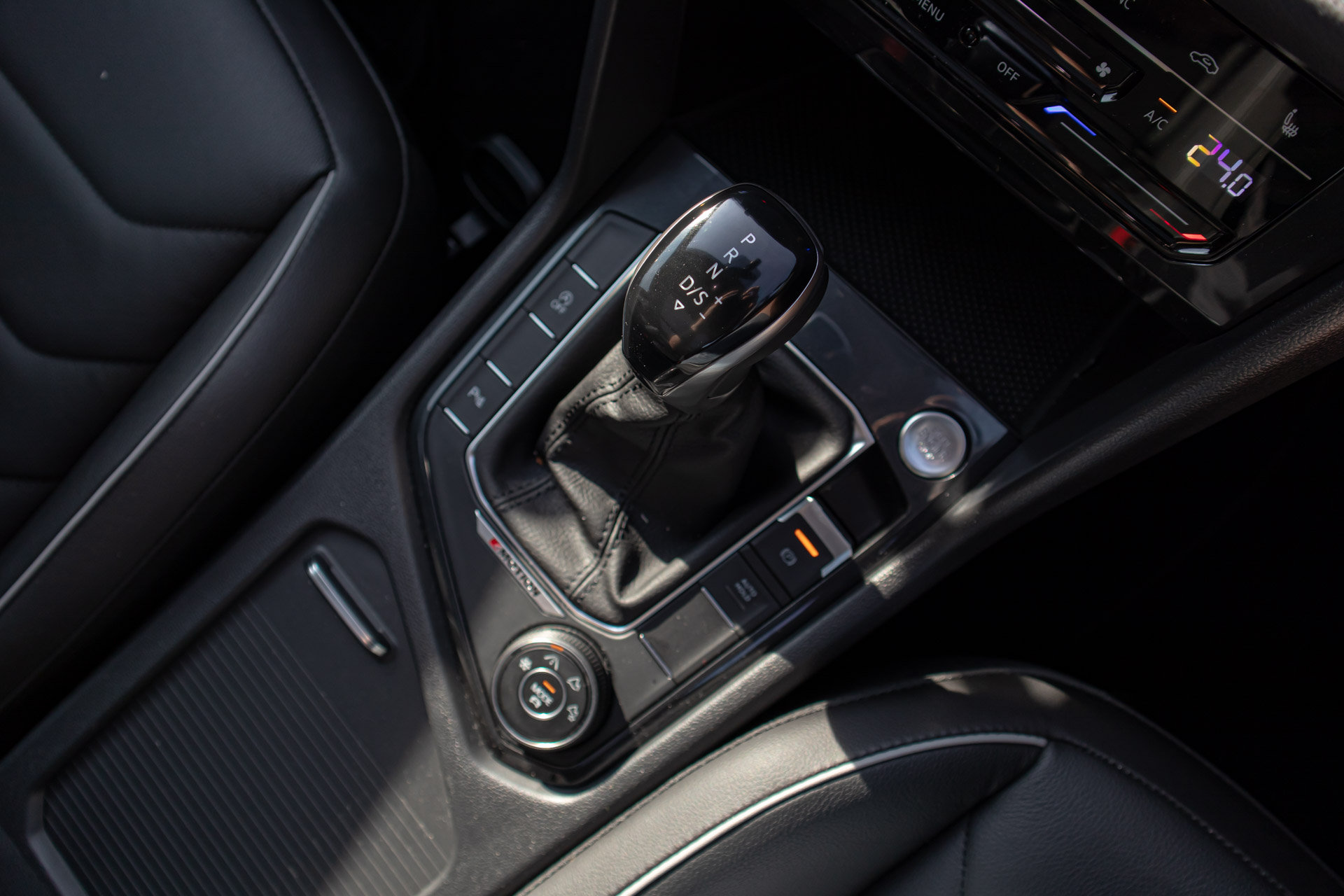 In fact, Volkswagen was so serious about stamping out physical switches, that even the entire climate control panel is touch-sensitive.

Theoretically, this makes for a cleaner and less cluttered aesthetic overall, though touchscreens do make it harder for you to change the car’s settings whilst you are on the move. 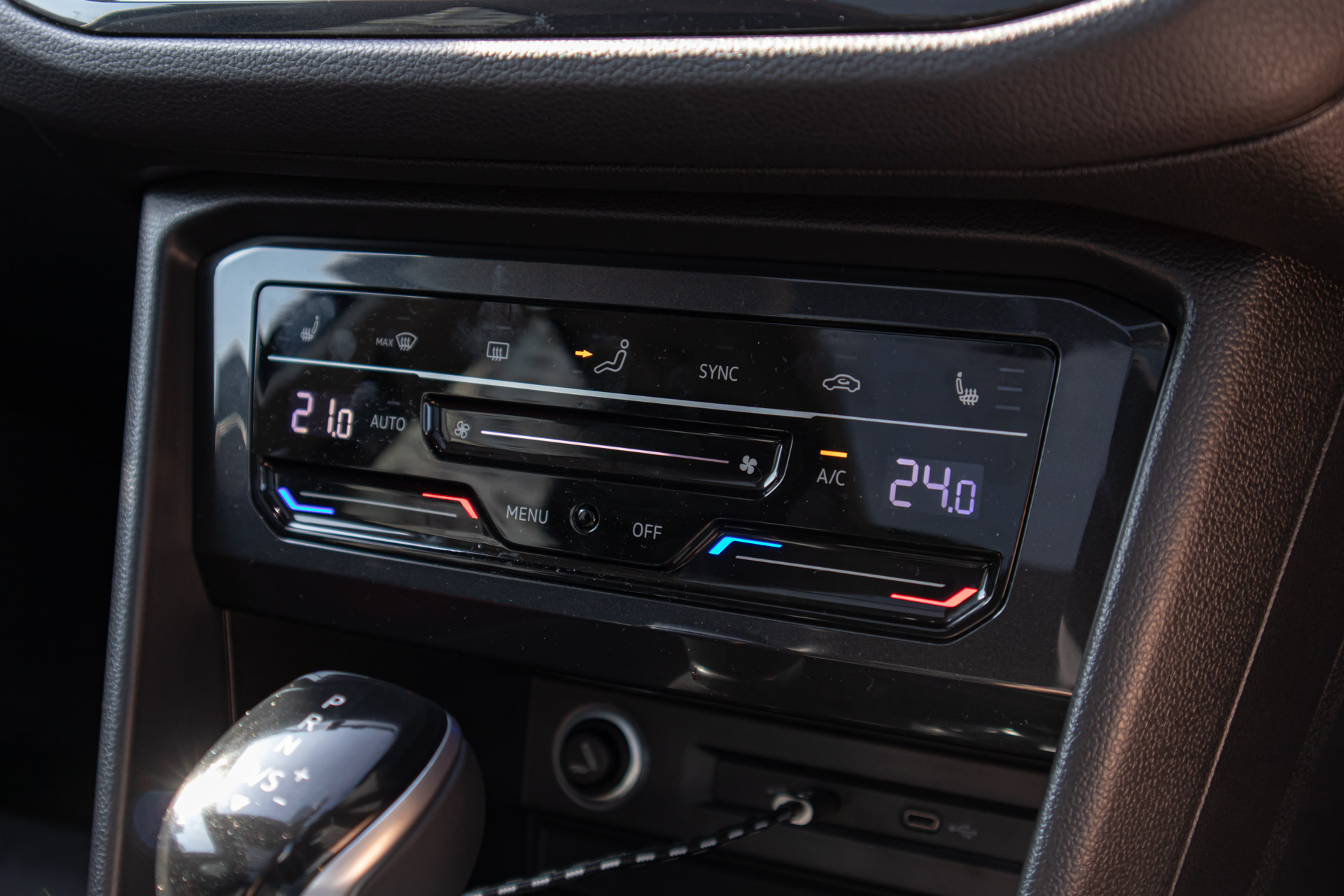 The car does come with a moonroof, and thankfully Volkswagen opted to retain a physical rocker for opening and closing it. The plastics used in this area certainly does not feel expensive though.

As there's no physical buttons to toggle the various car settings, it is cumbersome to even comb through the various sub-menus to even disable the car's traction and stability control.

It handles some spirited driving with what we’d deem as a competent level of confidence, akin to what you’d find in a well-sorted hatchback. We did manage to destabilise the rear end of the car, but this was with very violent steering inputs and with all driving assists off. 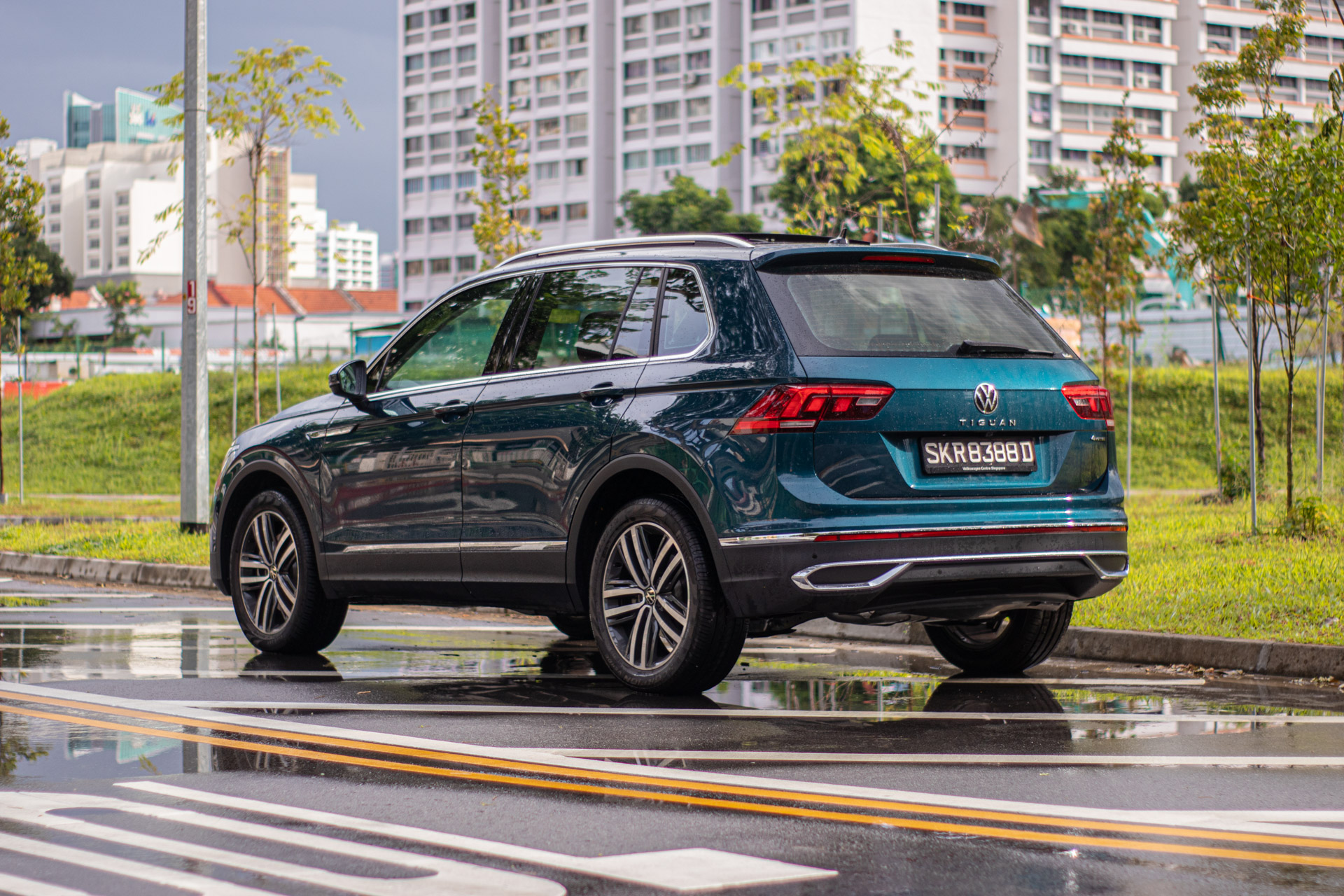 In reality, there aren't many scenarios which you'll have to do that in. Driven sensibly but hard, there's agility to the way the car goes about doing its thing. Some body roll can be detected, but ride comfort is not affected. 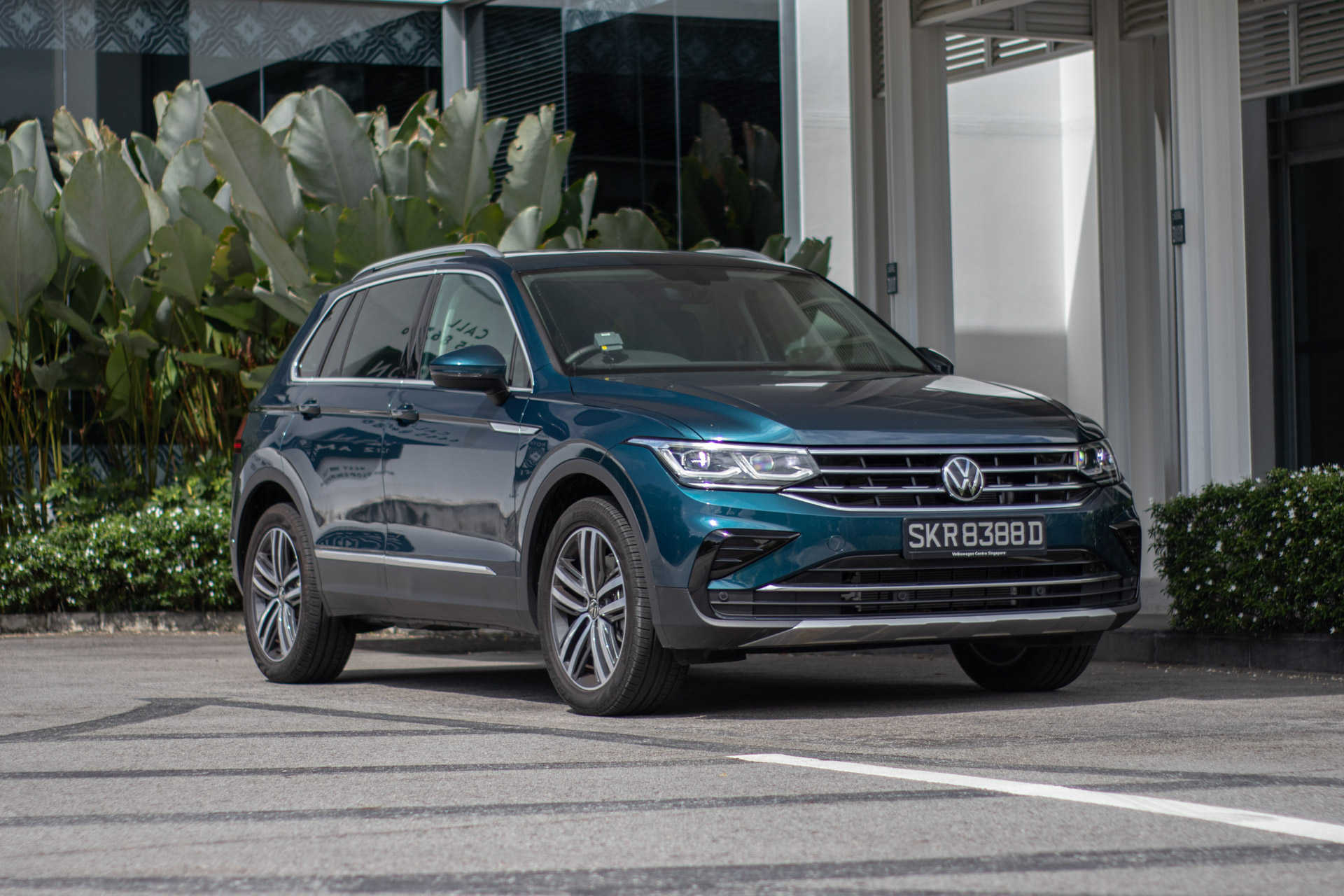 Where its car underpinnings pay off, is really in the bends. The steering, whilst a smidge over-assisted, does feel decently accurate and sharp.

The brakes feel pretty robust too, considering this is a larger vehicle. This agility helps to convince you that you aren’t actually in a crossover, but in perhaps a slightly enlarged hatch.

Also in cahoots with the chassis in tricking you into thinking you're in a hatchback, is its 2.0 litre four-banger. In Volkswagen tune, this motor is lively and loves to rev. Even the slightest twitches of the throttle will see the engine building up revolutions fairly rapidly. 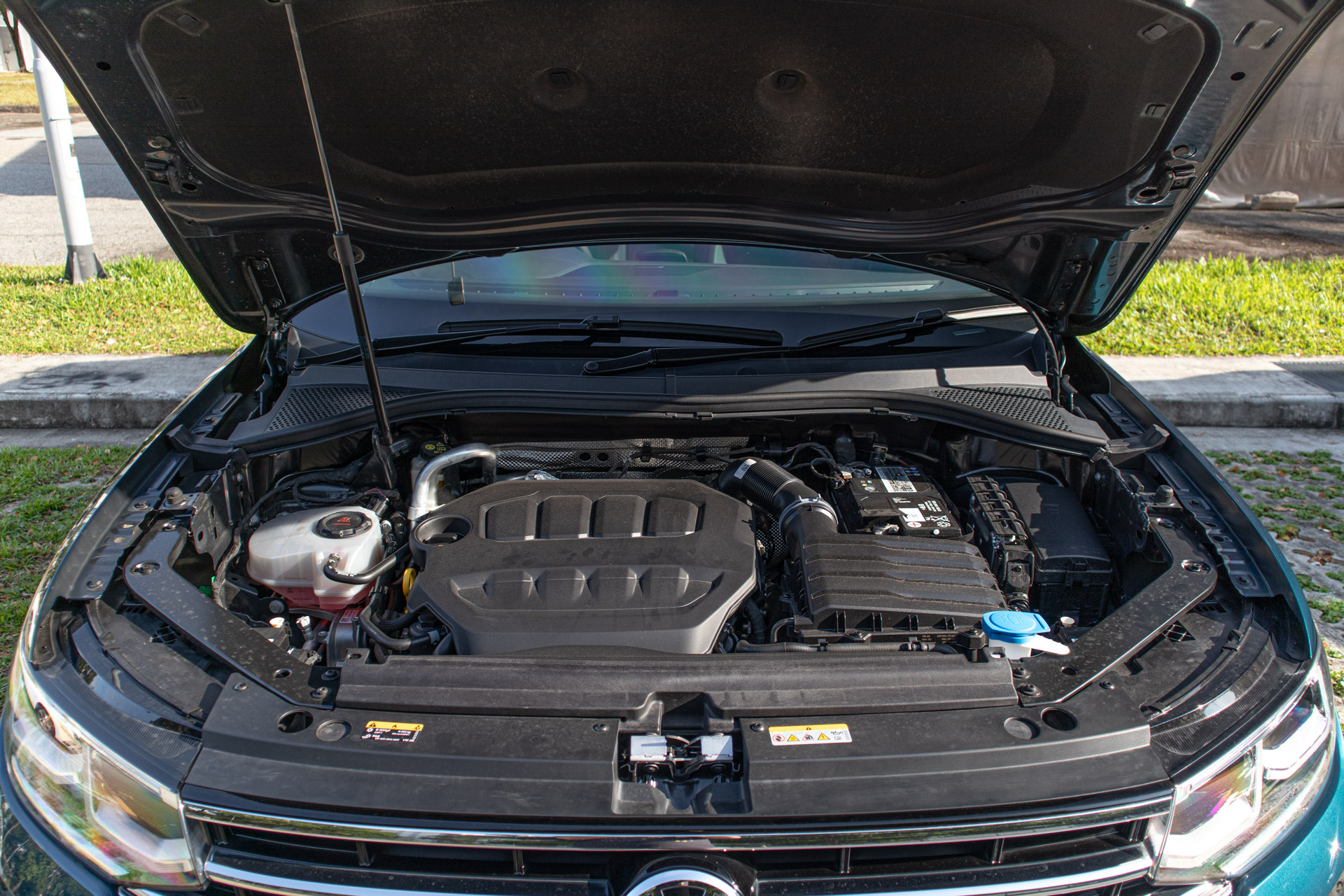 It has a peak power output of 187bhp, and plenty of power under the curve, making the car feel more nimble as a result. We liked the seven-speed DCT attached to this engine too - it shifts rapidly, and the car even blips the throttle for you on the way down.

For extra pace off the line, Launch Control is also available.

With its four-wheel-drive system, the traction and grip that results, and the characteristics we spoke about previously, the Tiguan is an SUV that legitimately drives like a decently-sorted hatchback. There's no willowy feeling that you'd expect to find in a higher riding car. 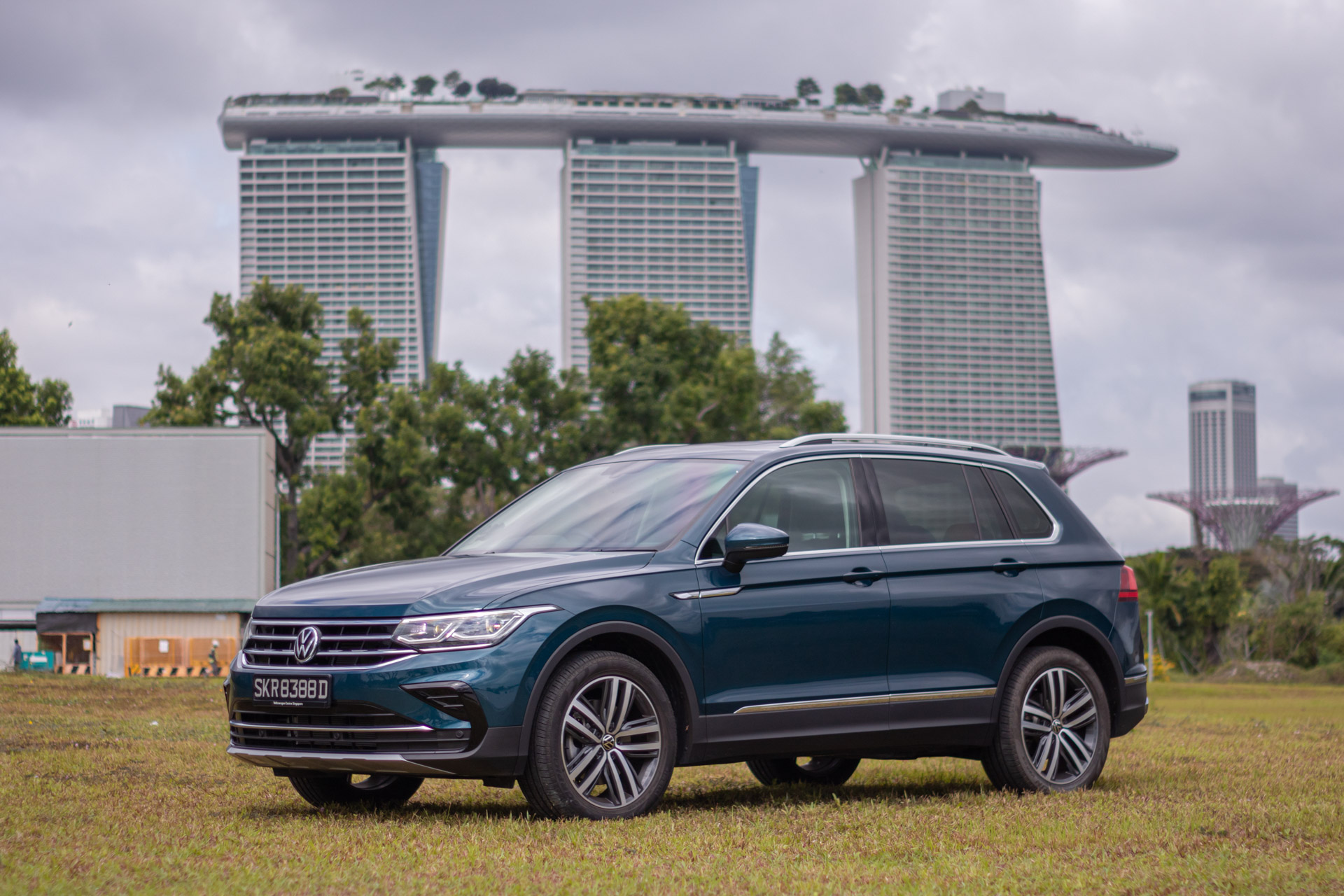 It combines a practical five-seater car, with slightly playful driving traits (audible wastegate anyone?) and excellent build quality at a palatable (for a European car) price. Truly an SUV that is very un-SUV-like!

If you'd like to check out the Tiguan for yourself, do contact Volkswagen Singapore for a test drive!