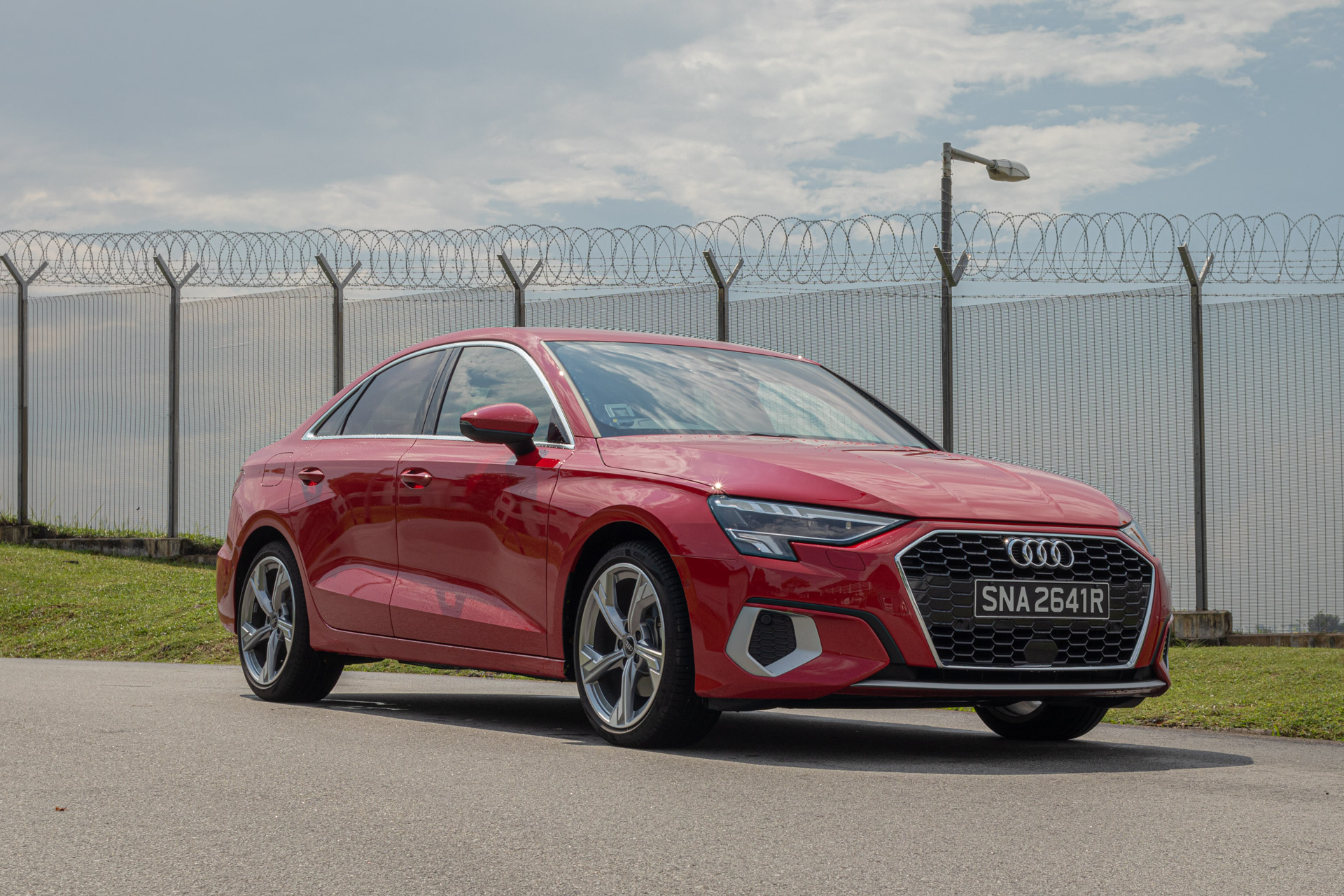 We had an epiphany literally within 30 minutes of picking up the Audi A3 for our media drive.

Through our short commute to one of our test routes, we pulled up beside a Mitsubishi Lancer Evolution 3. As it turns out, in terms of physical dimensions, this latest iteration of Audi’s compact saloon isn’t too dissimilar to the 80s JDM rally icon.

But dig a little deeper, and you’d realise the similarities go far beyond that. Both cars have turbocharged four-cylinder engines, and are built by legendary automakers from the rally sphere. 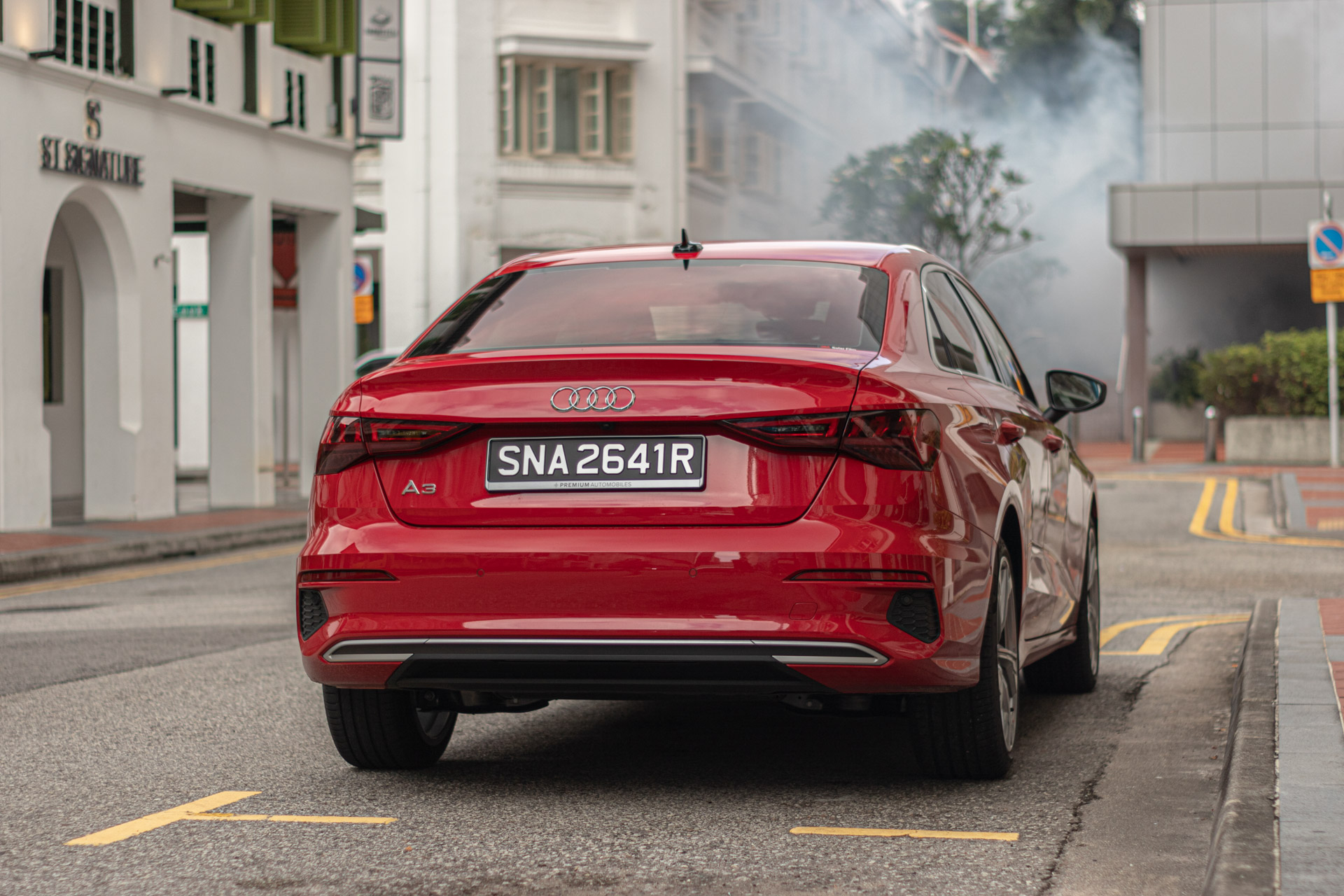 Whilst our test car isn't equipped with the Quattro four-wheel-drive system, it is available as an optional extra. The Evolution comes with an all-wheel-drive from the factory.

With the similarities in ideology, could the Audi A3 actually be a spiritual successor of sorts to its older, Axis counterpart?

Some Food For Thought

This is an atypical way to start a review for sure. But it does leave you wondering, which part of the market does Audi aim to capture with its A3? The obvious answer is of course the premium compact saloon class. 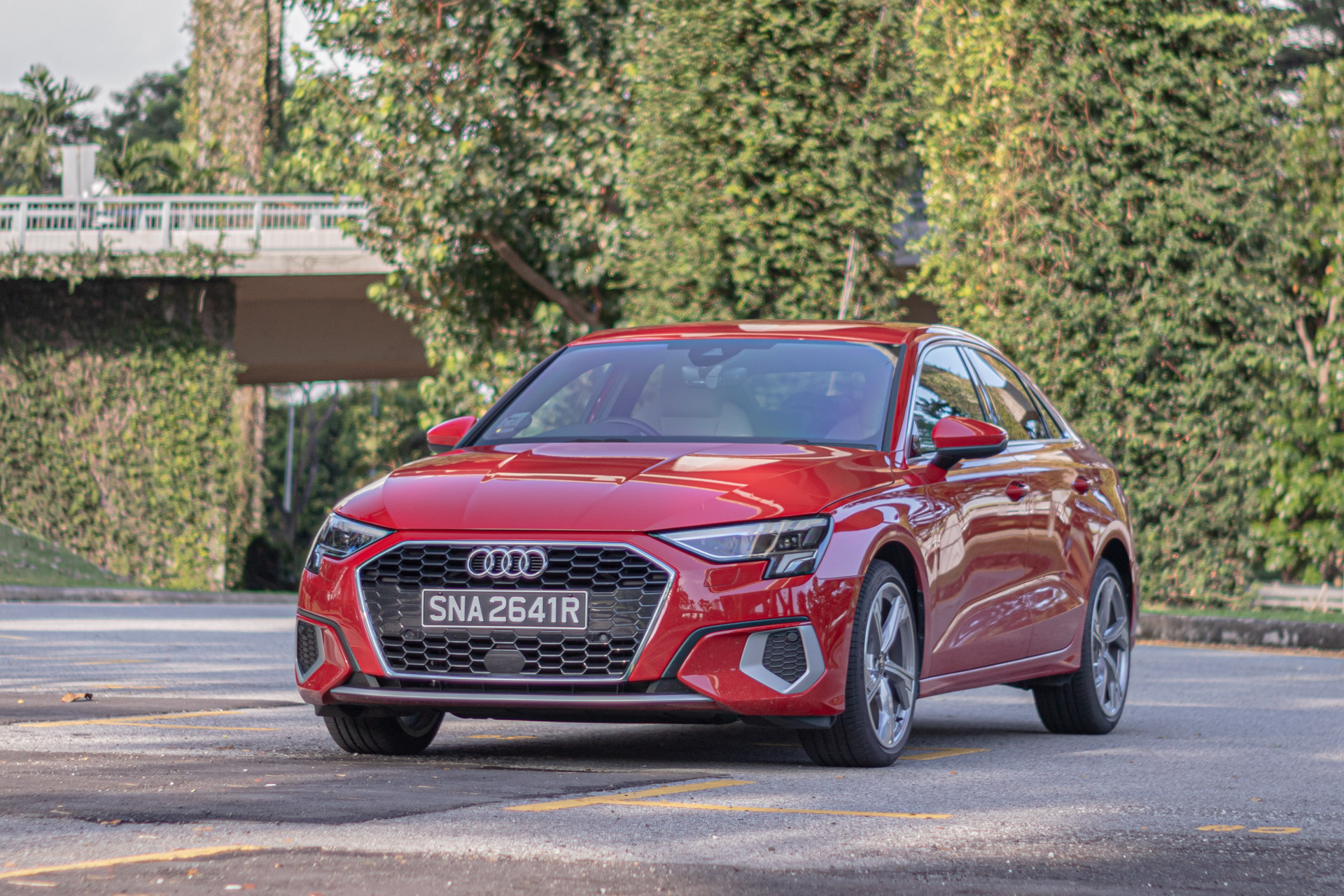 But it is a disservice to the A3 if merely labelled as such.

Proof Of The Pudding…

The Audi A3 shares its basic underpinnings with other, more affordable VW-Audi group cars. The MQB Evo platform Audi used to create the A3 has also been used in the VW Golf, Caddy and the Seat Leon. 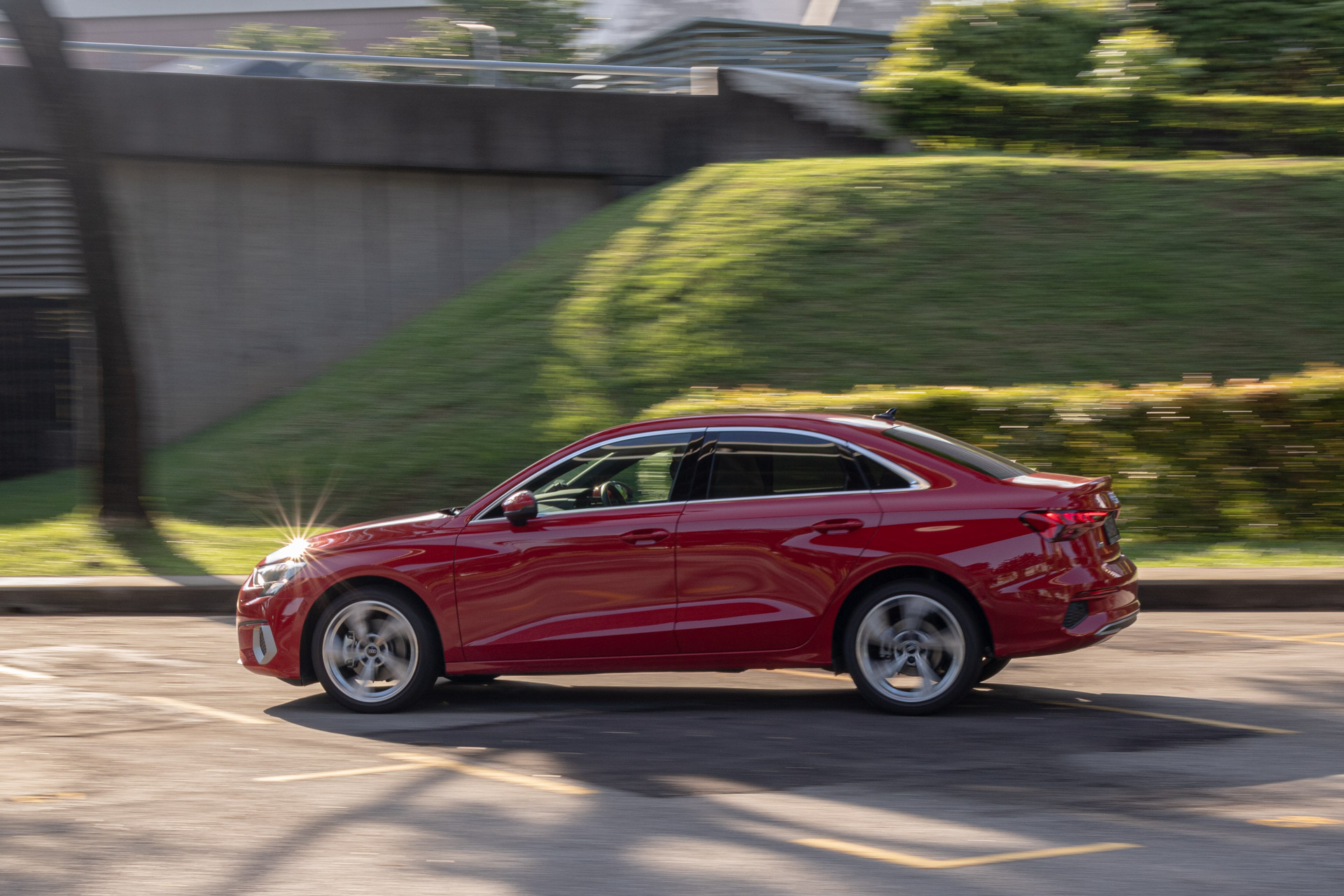 There’s this underlying fear going into the review, about how its humbler backgrounds may shine through the veneer of poshness and luxury. That somehow the A3 would fail to deliver the full fat ‘Audi’ experience.

… Is In The Tasting 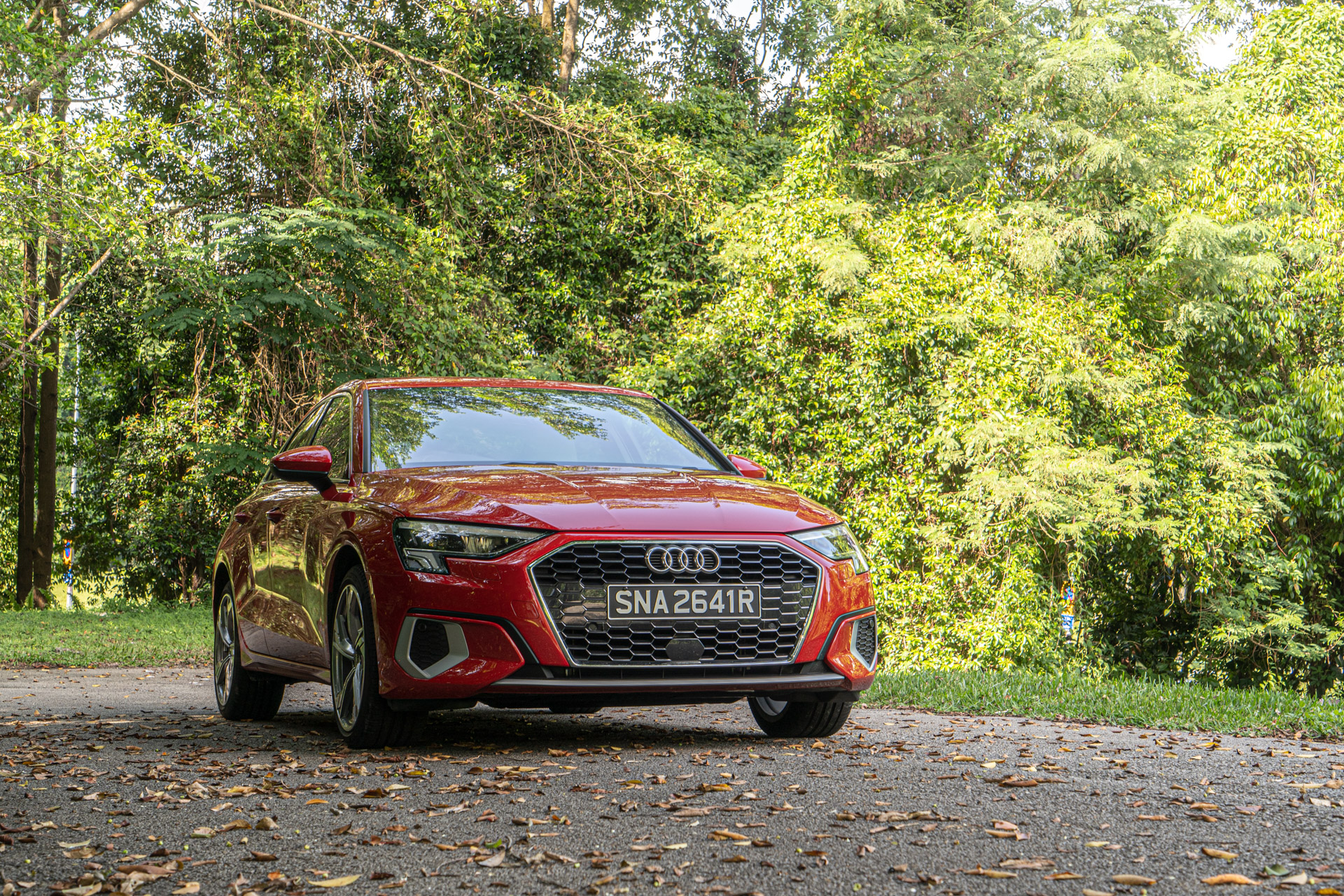 These fears were unwarranted. To be clear, as this is an entry-level Audi, you'd expect some tyre roar at higher speeds. When under load, the engine does grumble a little too. But if you can ignore these, we are glad to report the Audi A3 does its job as a compact premium saloon very well indeed.

Under the bonnet, you’d find a 1.5-litre TFSI four-banger, mated to a seven-speed S Tronic transmission. The combo is good for 150 bhp, which means a century sprint time of 8.4 seconds and a top speed of 232 km/h. 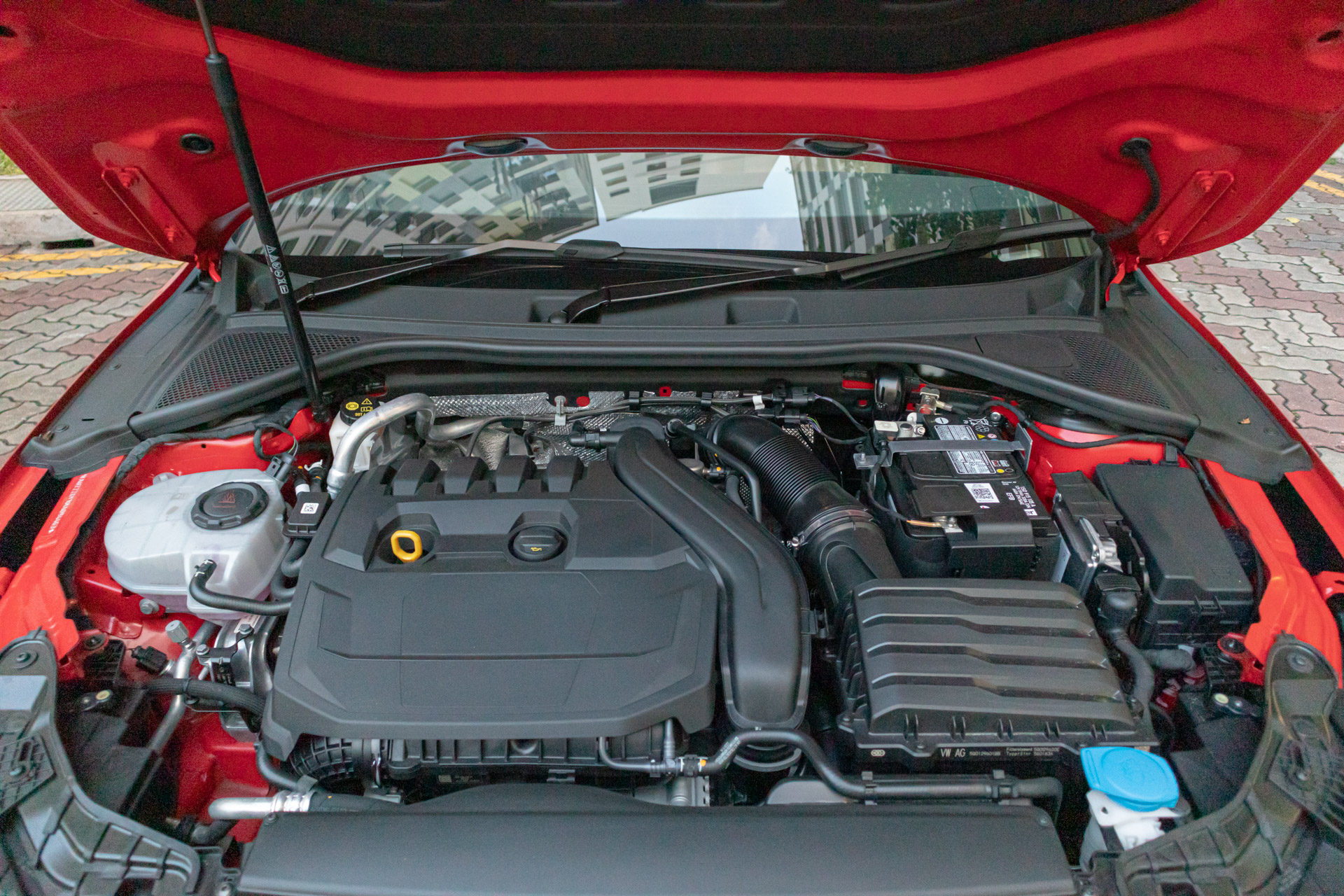 Naturally, there seems to be a dip in power when the Mild Hybrid system runs out of puff or when the turbocharger comes on boost. At that bit of the rev range, the car does seem to bog for a brief second or two, before surging again. 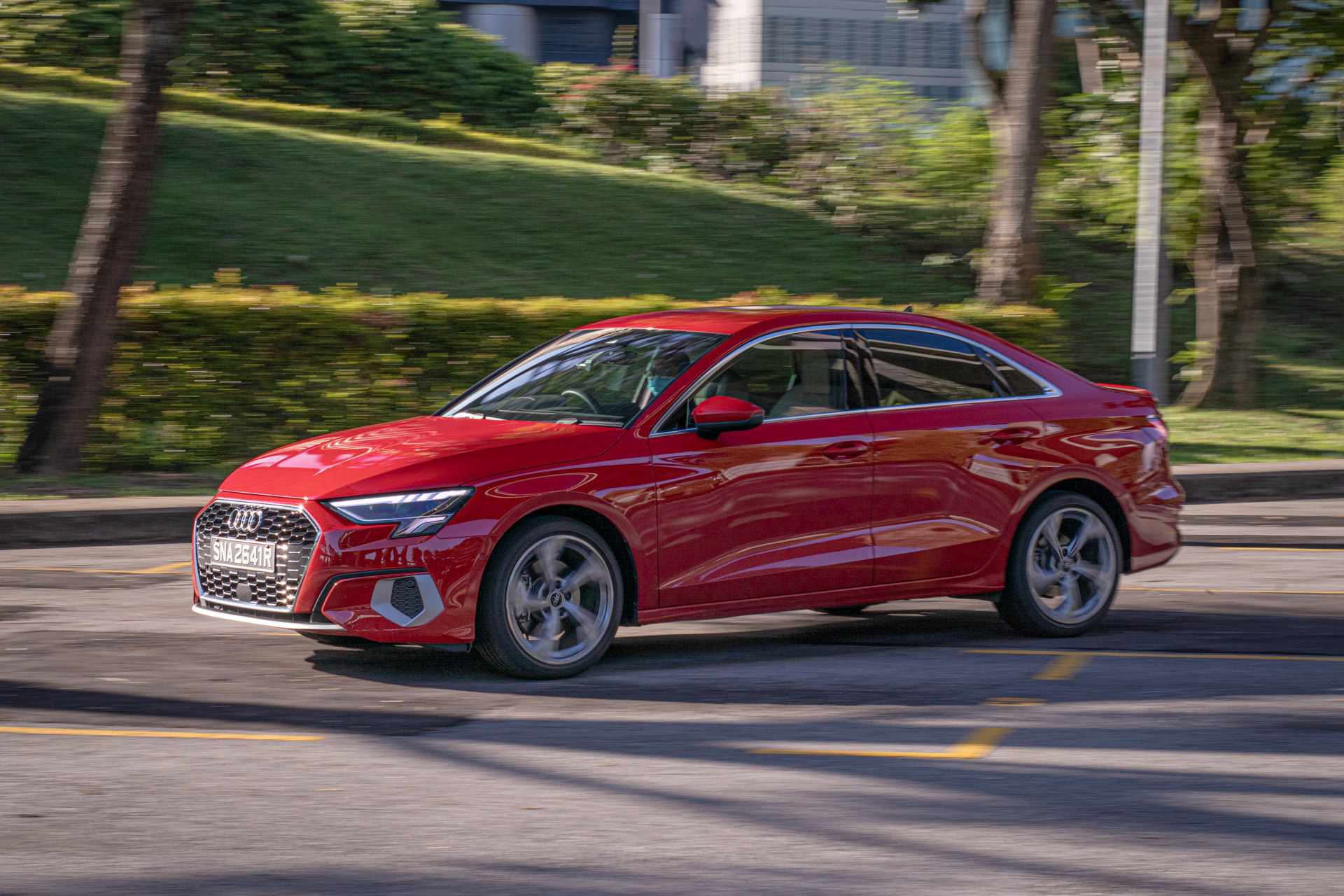 To combat this, Audi has provided you with the option to toggle between three drivetrain settings.

In 'Efficient', the car short shifts and the throttle is dulled. No surge here; the car feels sluggish, naturally deterring you from even thinking about driving it hard.

In 'Balanced', it seems that the car has dulled the response from both the mild hybrid system and the turbocharger to create a more linear power curve. This makes the car a lot smoother - we kept the car in this mode throughout most of the test.

In 'Dynamic', the car feels almost analogue. It is eager, and there's little to no artificial manipulation of the power output. You will feel as the car builds turbo pressure - good for a sporty drive, but can be fatiguing if used daily. 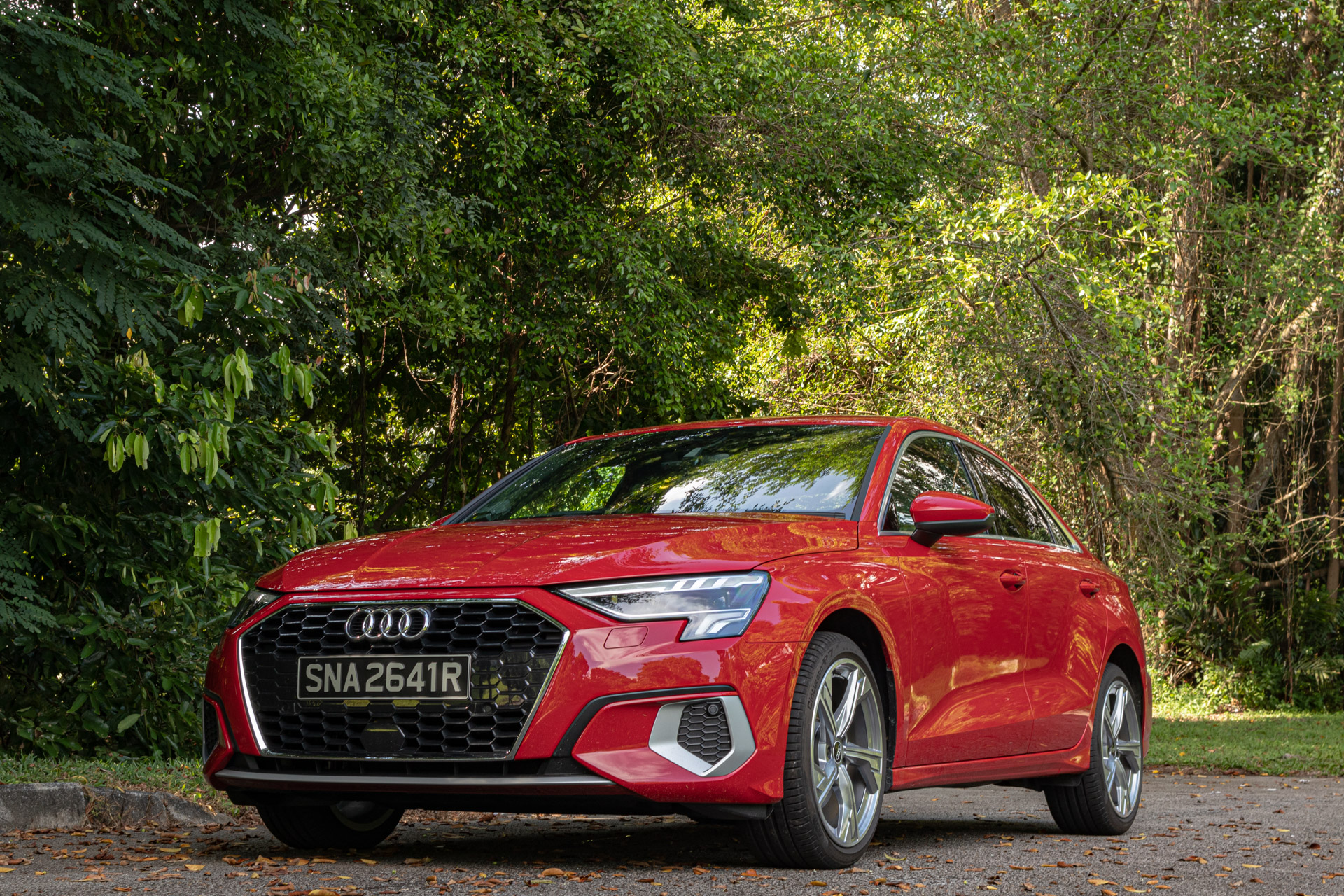 The chassis can be set up in the same three ways as well. But instead of leaving the steering on balanced, which we felt was in a sort of no man's land in terms of weight and feedback, we kept it in 'Dynamic'. Despite the relative heft, it gave us the most reassurance whilst daily driving.

You can drastically alter the car's personality through its different driving modes. The A3 is capable of channelling its inner luxury saloon in its more comfort-oriented setting. 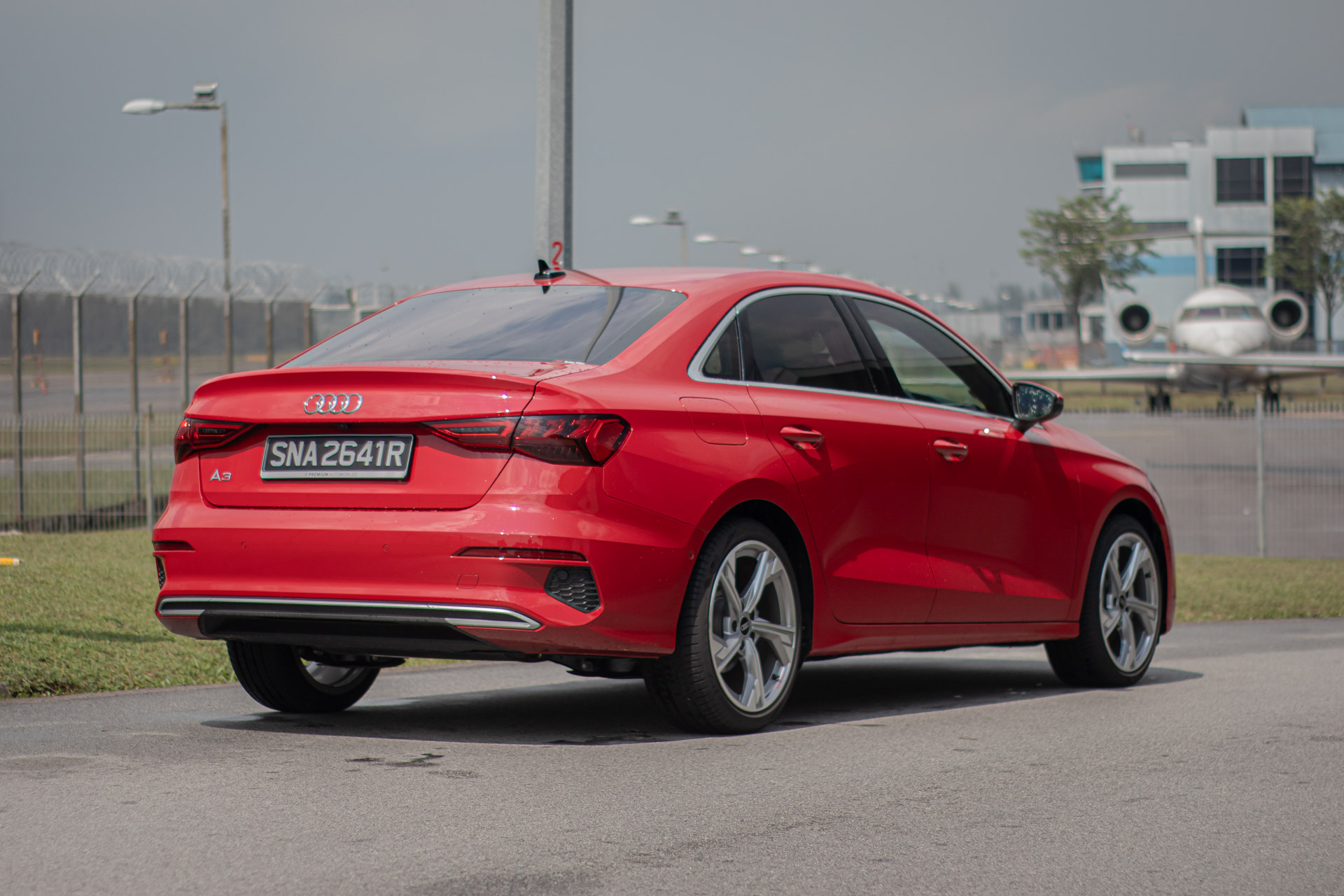 Put it in racier modes, however, and it feels taut, well-sorted, and makes for a huge laugh when all you are keen on doing is hurling yourself at the scenery through some tight twisty roads.

Again, for most of the test, we left the drivetrain settings on 'Balanced', and the chassis on 'Dynamic'. We've put more than a week's worth of motoring in the car, and yielded a fuel economy figure of 12.8 km/l.

Despite being an all-new car, this A3 doesn't differ that much aesthetically as compared to its predecessor. This is very much in line with what we've come to expect from the Germans, valuing evolution, rather than revolution. 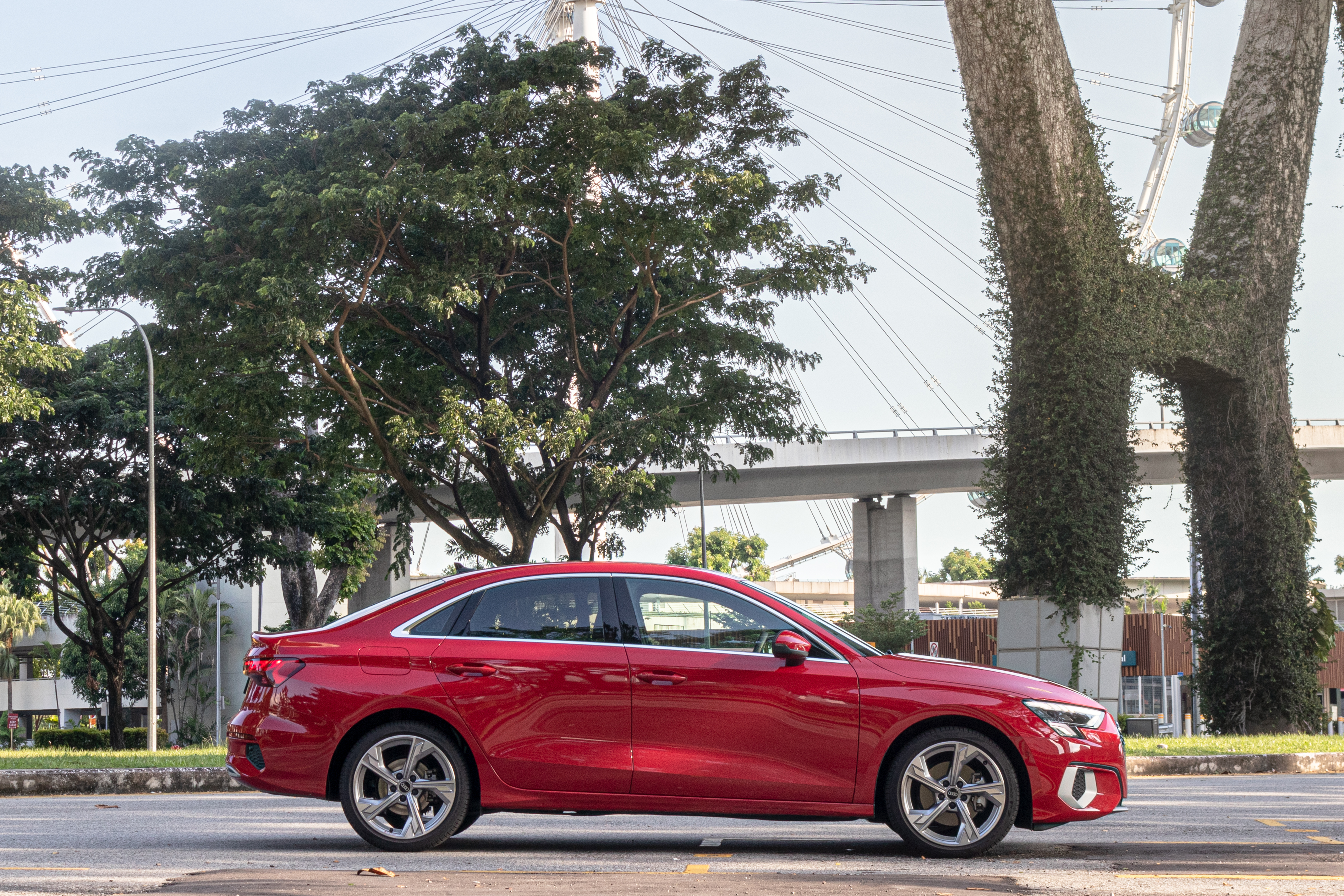 The most obvious styling changes are upfront. An enlarged grille dominates the front of the car, flanked by some eye-catchingly detailed headlights that you might not expect to be fitted on a car at this price point.

The car also gains faux brake cooling vents. These are blanked off, but that hasn't stopped Audi in highlighting their apparent fakery with a fancy silver surround. Even so, the car looks handsome, and we'd dare say, almost sporty, especially in the shade of red the car comes in. 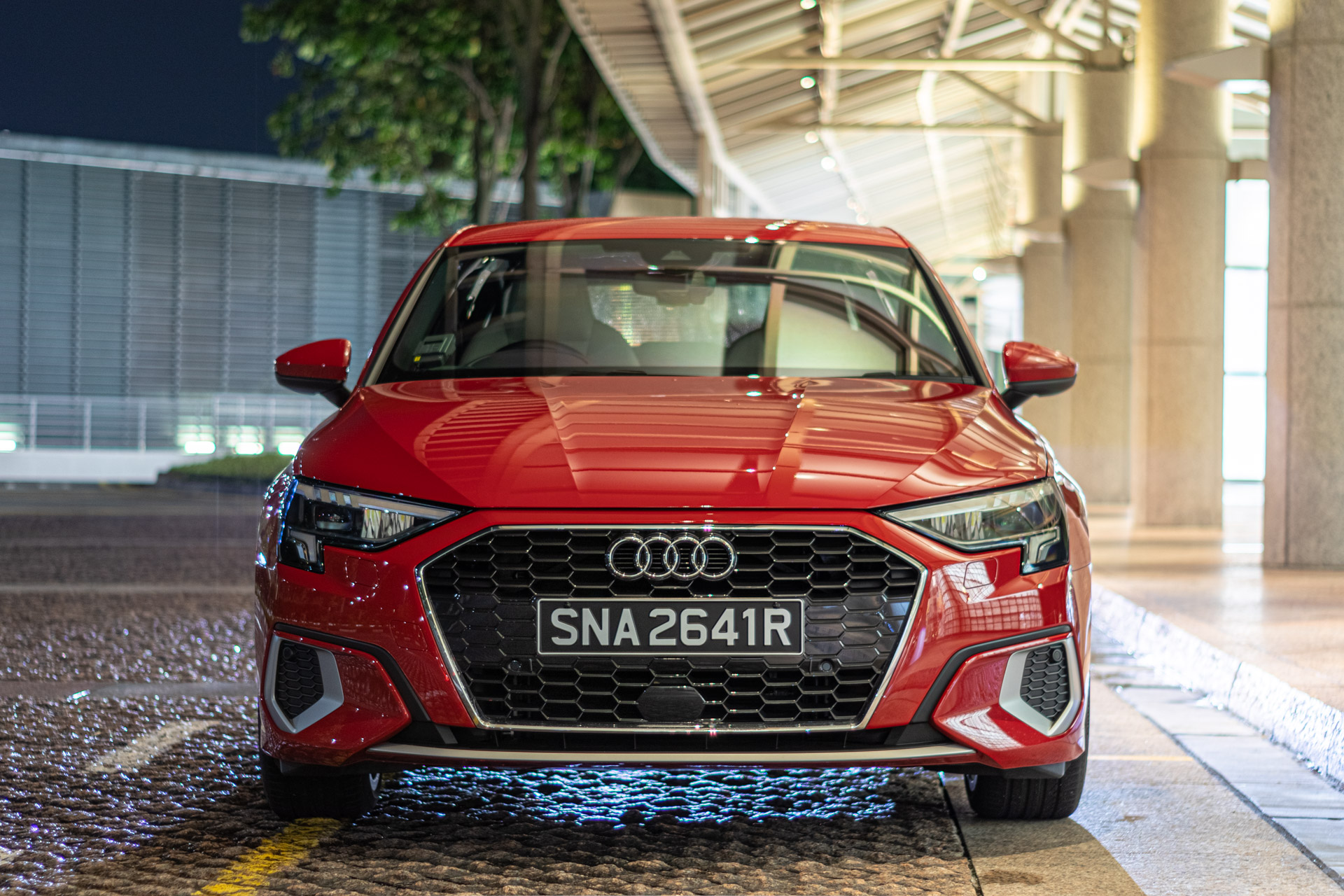 Its looks definitely betray its price tag, but in a good way.

Materials, fit-and-finish are what you'd expect from an Audi. The equipment list is generous too. Audi's latest MMI system now nestles nicely in the dashboard. It also has a fully digital gauge cluster, which is similar to what you'd find in other Audi offerings. 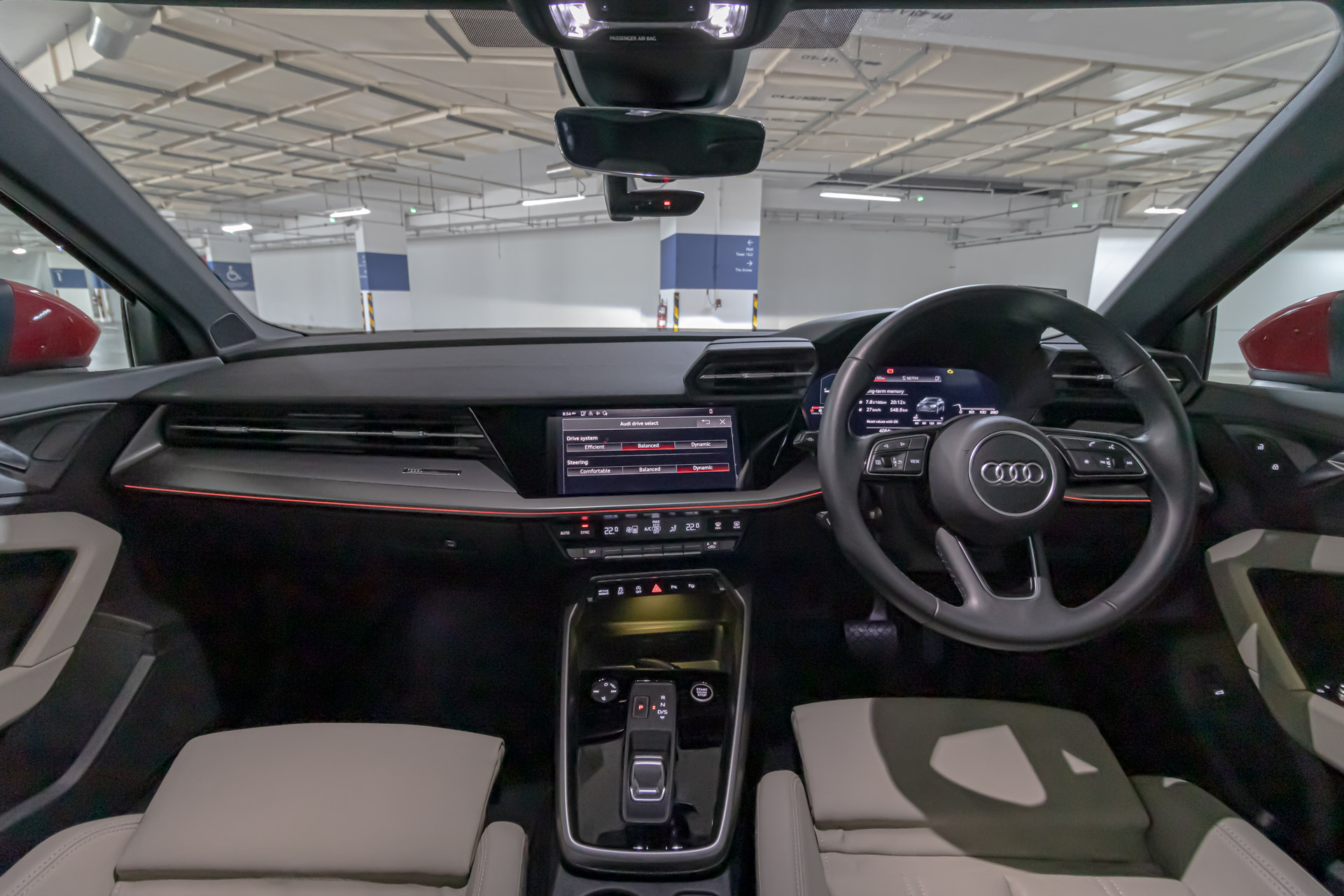 What you won't find though, are features such as auto brake hold, or super-sophisticated self-driving technology. Again, that is what you'd expect of an entry-level saloon.

Interior space is a step-up over the previous generation. Even taller passengers had little issue with legroom and headroom in the back. The front seats are fully electric bucket seats, with adjustable lumbar support. It gets our seal of approval. 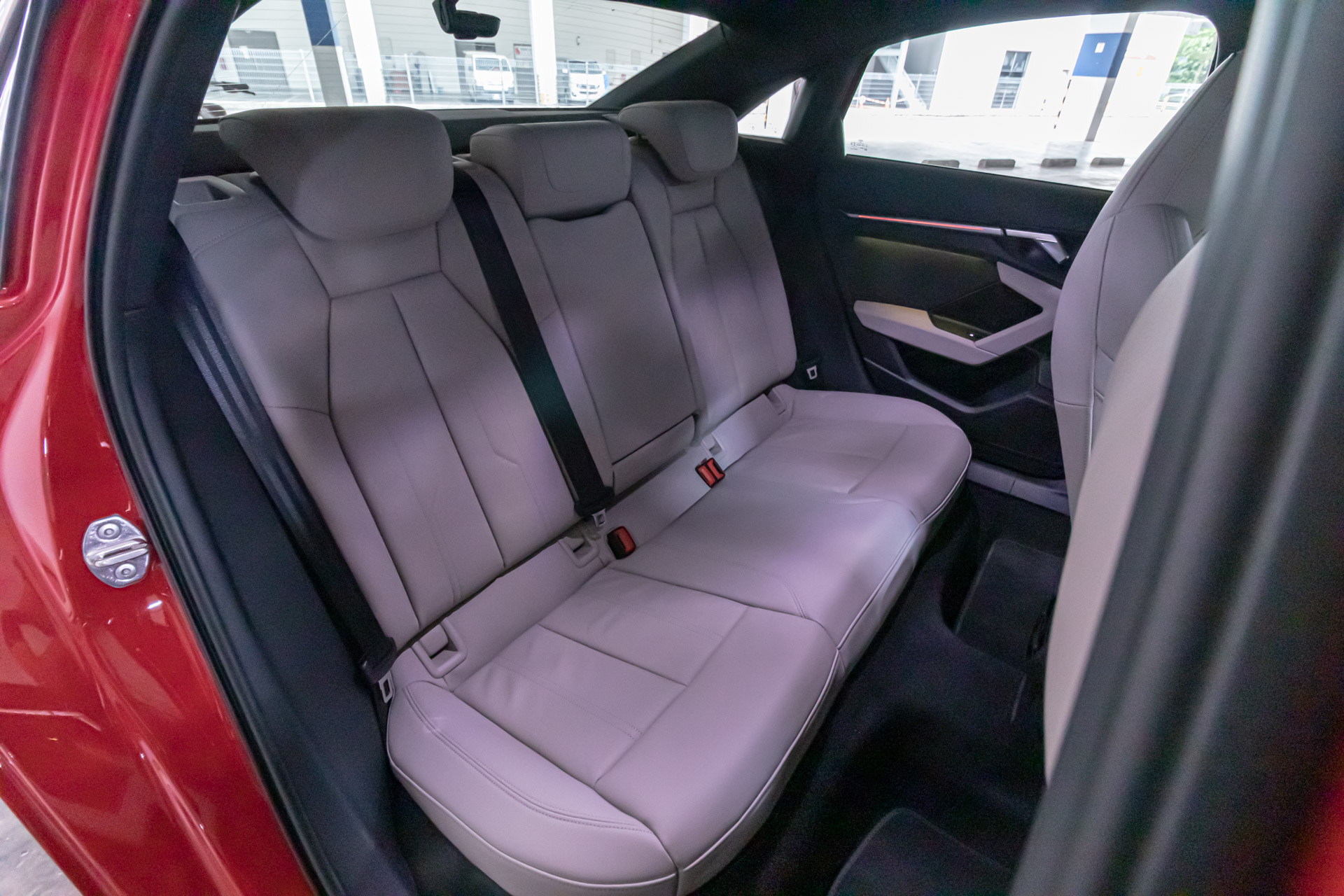 But these bulky buckets fitted to a car with a narrow bodyshell does mean reduced visibility for the rear passengers. You're better off not attempting to fit three adults abreast in the back. Keep this as a four-seater, and there's actually plenty of space on offer.

What isn't so good, is the visually 'busy' dashboard. We understand that the designers were trying to imbue the same sense of aggression of the front end on the inside of the vehicle. 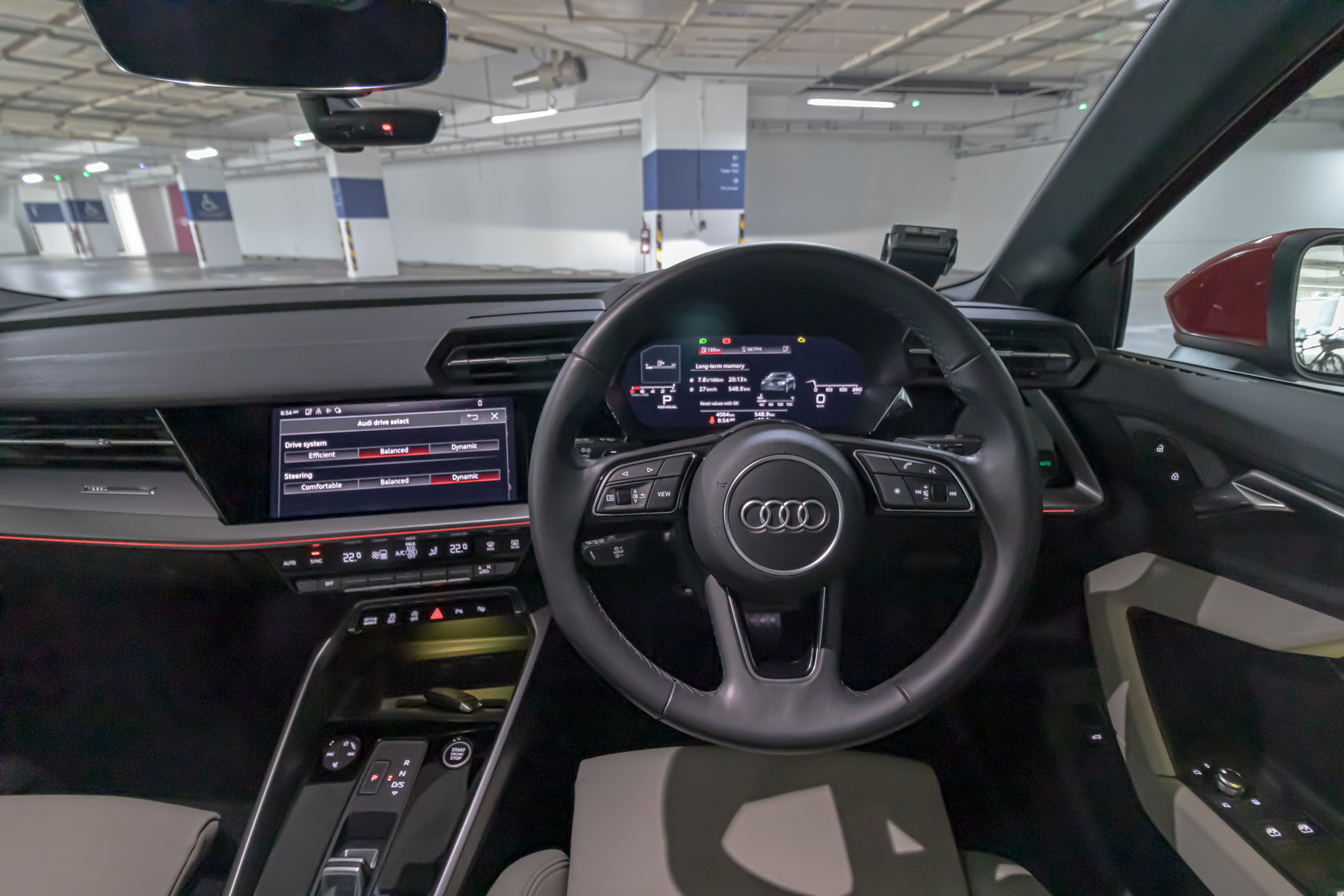 The execution though is sub-par. There are lines running literally in all directions. To compound the problem, they've opted to shift the driver's aircon vents upwards and sculpted them to be ultra angular.

It feels like this area of the cabin was plucked from a Lamborghini and haphazardly made to fit a compact Audi. Keeping this area more simple visually would have done the interior wonders.

Audi cut their teeth on the world rally stage, and the A3's performance DNA does shine through its refinement. It may present the lowest barrier of entry into the Audi ownership but do not for one think that you'll get a less-than-stellar experience with the vehicle. 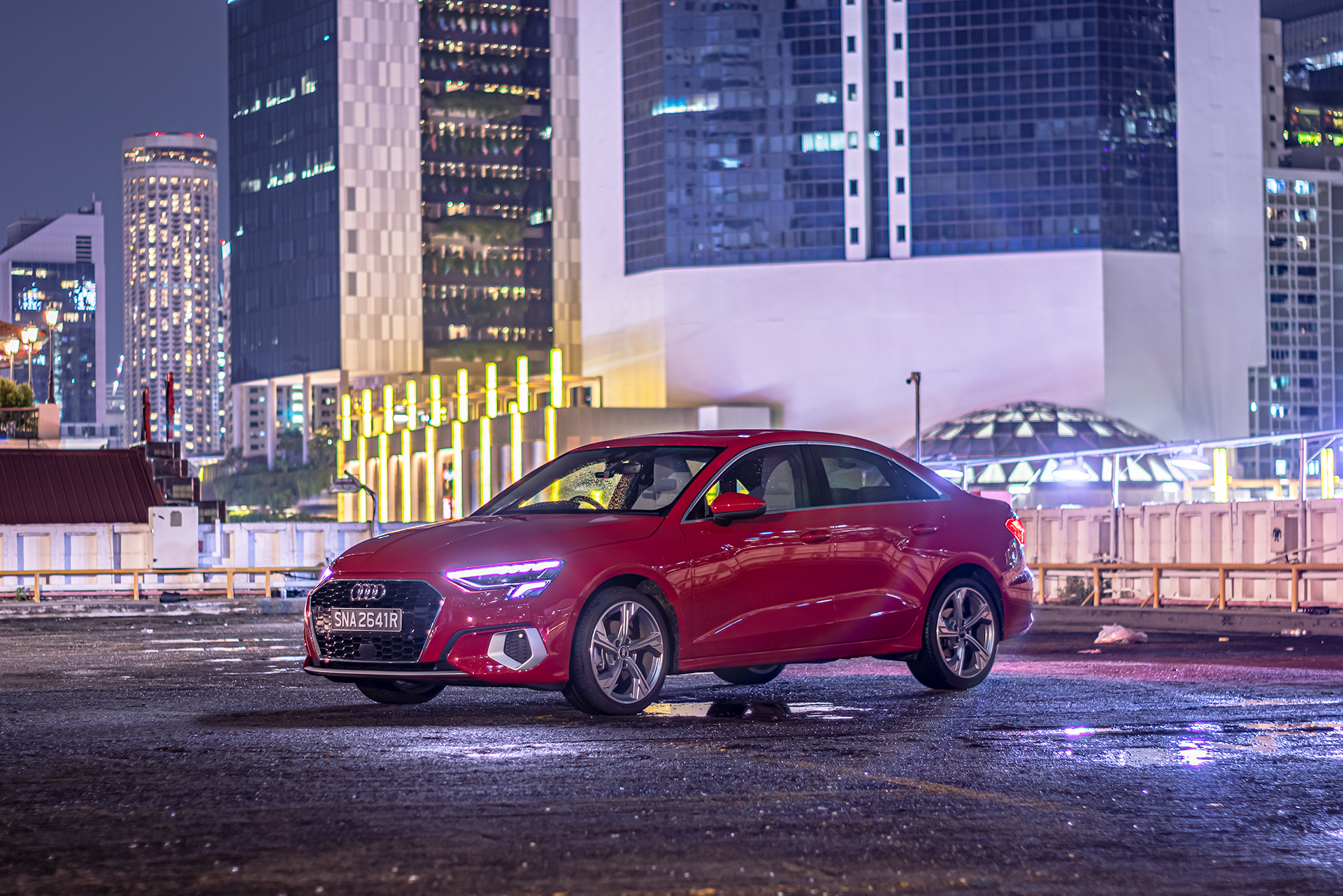 Granted, it may share its basic underpinnings with a couple of more mass-market offerings from its other VW-Audi group stablemates. But Audi has worked their magic very well on this car, and at no point would you ever think that this is an inferior product.

The Audi A3, objectively speaking anyways, may be priced like an entry-level Audi saloon, but we can assure you it certainly doesn't feel that way. It is comfortable and wafty when you want it to be, and it also does a good job canyon carving (or whatever the Singaporean equivalent is) when you are in the mood for it!

Visit Audi Singapore to book your test drive of the A3 Mild Hybrid today!