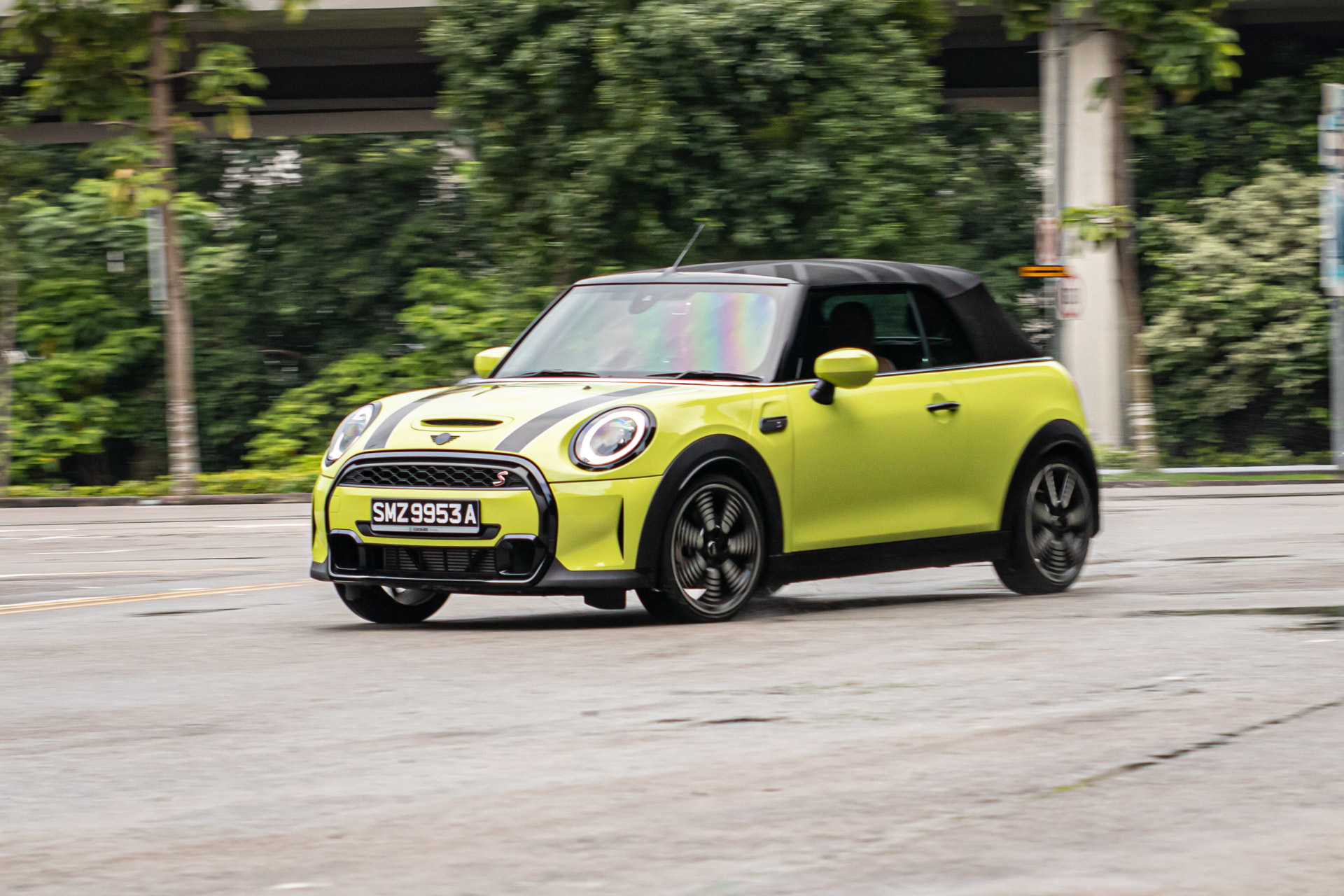 As its name may suggest, MINI has long been a brand synonymous with the small size of its offerings. However, as cars have gotten bigger and bigger over the years, so too has the MINIs.

The MINI has, therefore, become no longer very 'mini'. The good news is though, that its physical size increases, so too has its personality.

This is very apparent, especially in the MINI Cooper S Convertible. 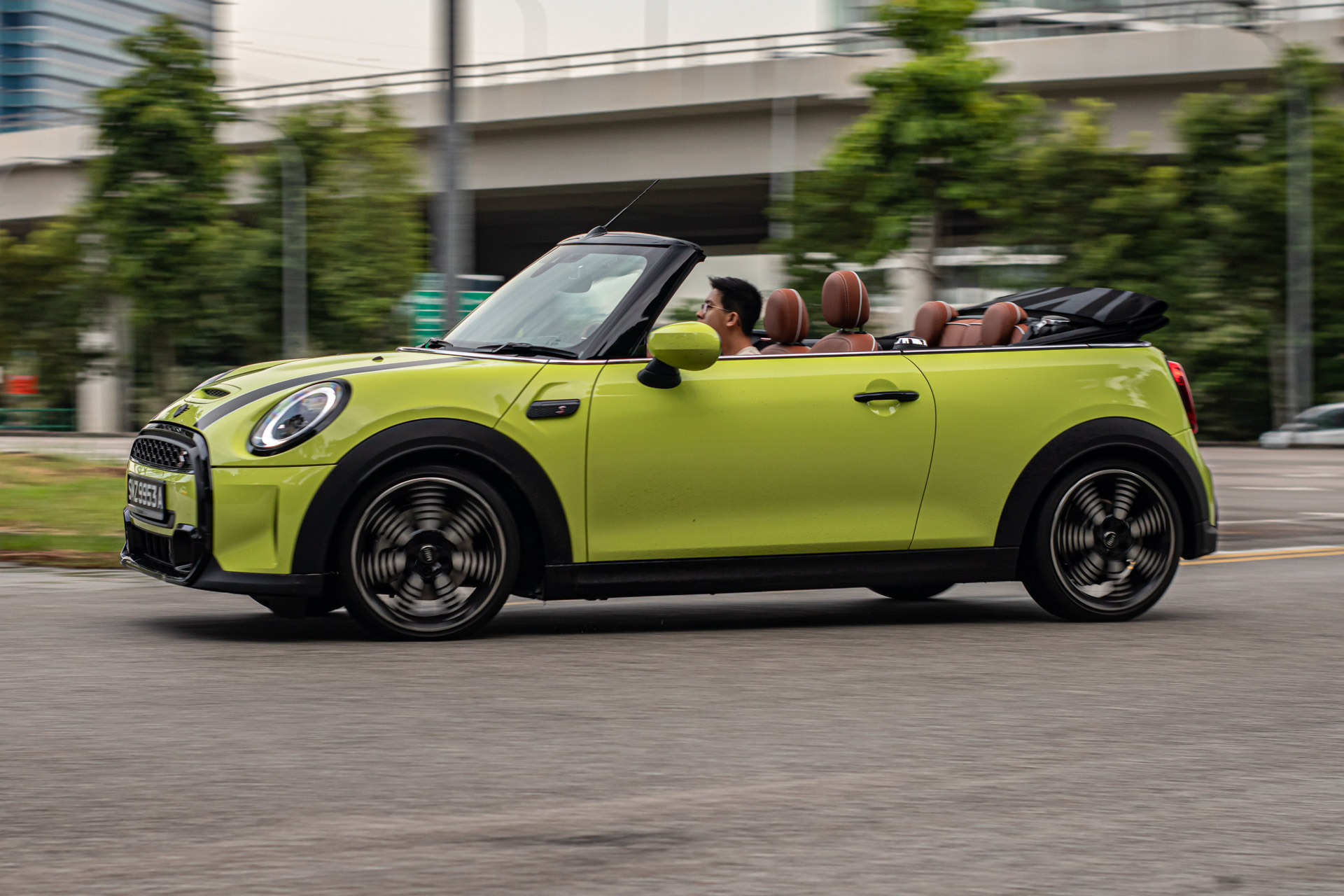 Right from the outset, the MINI Cooper S Convertible has a distinct look that stands out from the rest of the traffic, especially in the Zesty Yellow paint that our press car came with. It’s still undeniably a MINI, but now has the added novelty of being a drop-top.

The front fascia has been updated and the fabric roof has the classic Union Flag design that can be seen when it’s up. The lights are LED front and rear with the taillights also sporting the Union Jack design as in all modern MINIs.

This being the Cooper S variant also means that you get the S badges on the front grille and side scuttle, 18” rims, and a piano black twin exhaust setup. 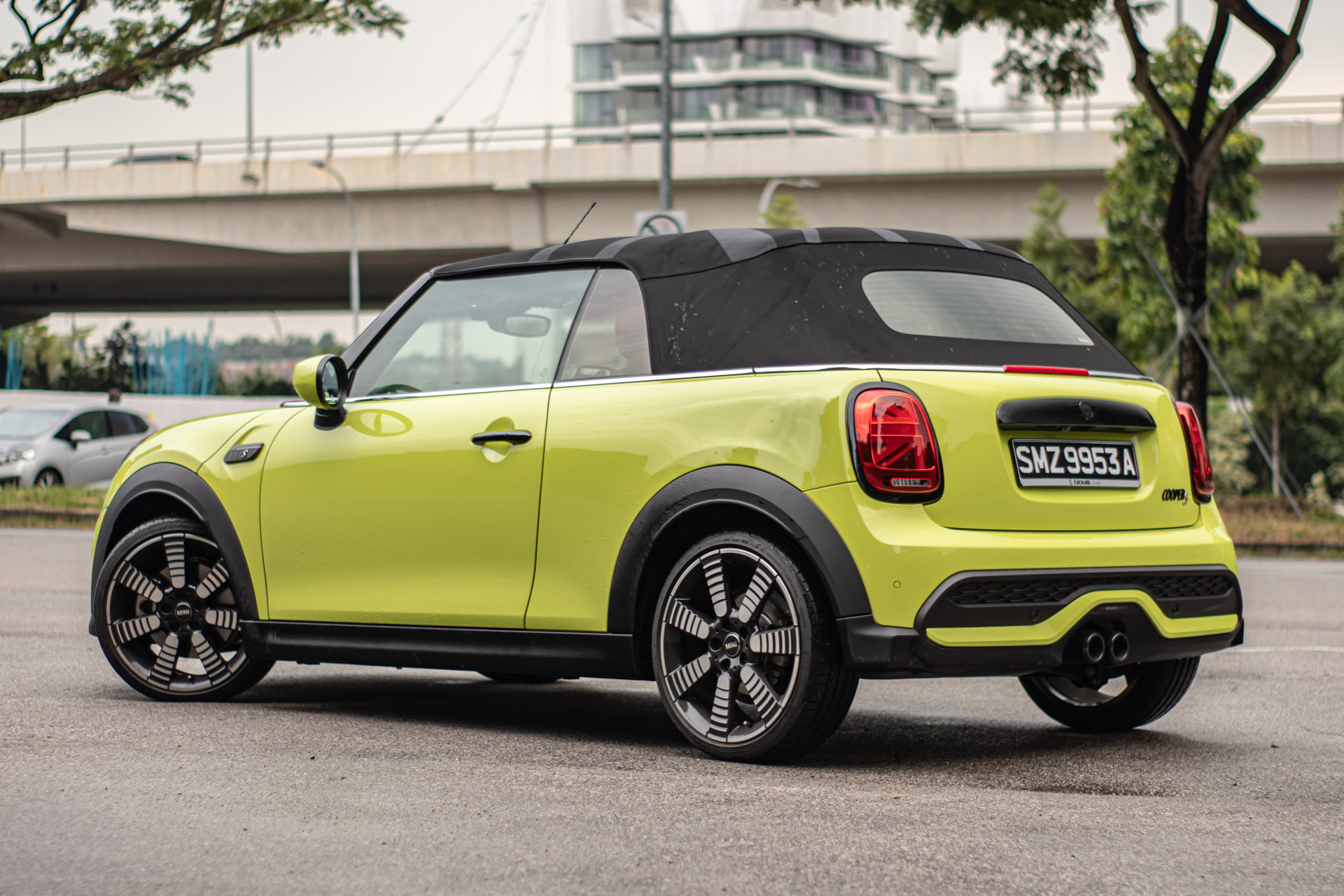 To match the vibe of the rest of the car, the interior of the MINI Cooper S Convertible is an incredibly stylish one.

Although there is a fair amount of plastic trim, it’s still one of form and not just function. The interior shares the same love for circles with the centre touchscreen infotainment display, door handles, speakers, and the digital gauge cluster all made up of circles and rounded edges. 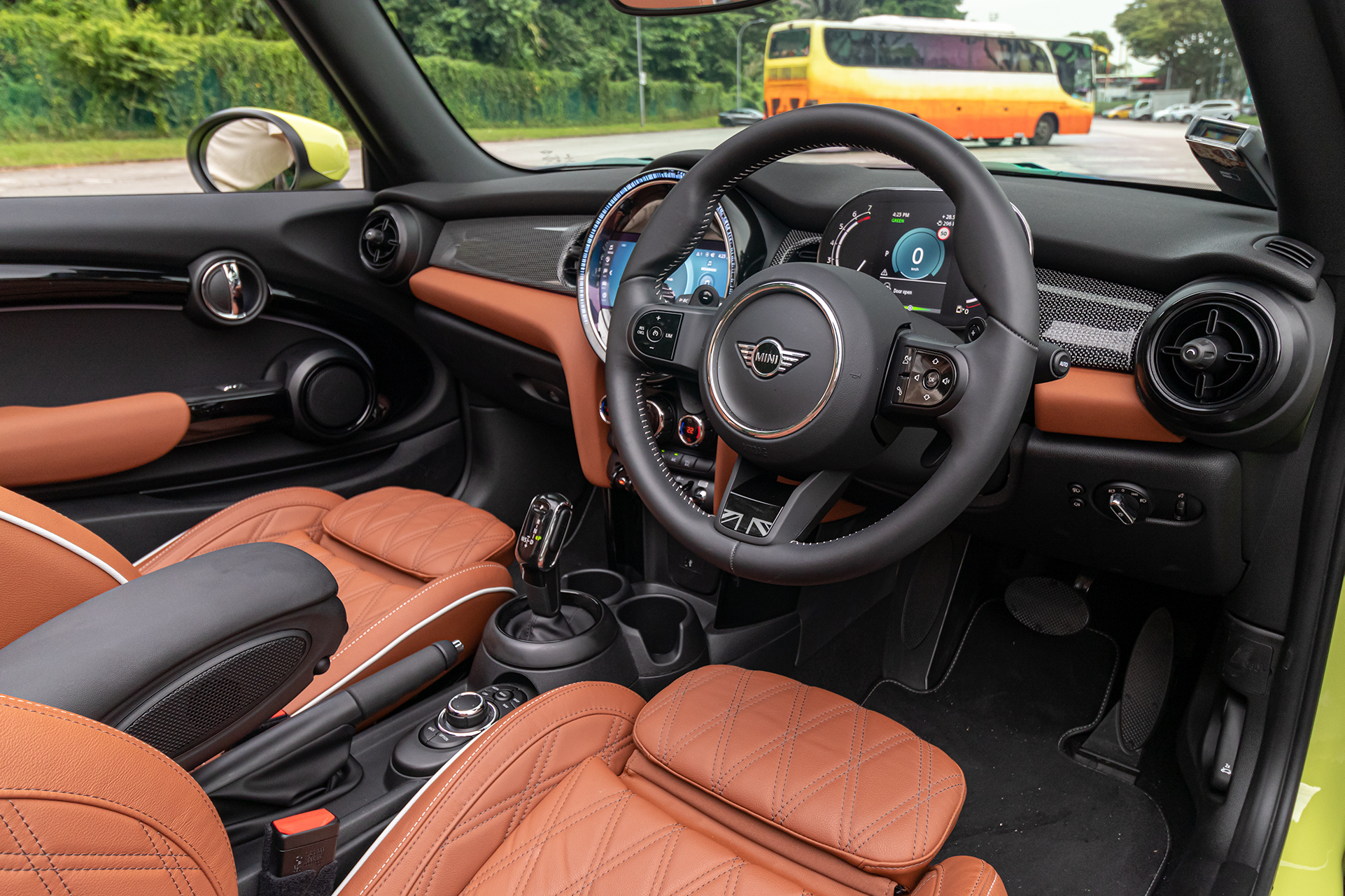 Our favourite design aspect is still the aeroplane cockpit-style toggle switches used for everything from the starter button, traction control, driving modes, and roof controls.

Speaking of the roof controls, the roof is fully fabric and can be folded or put up in 18 seconds at speeds of up to 30km/h.

The front half of the roof can also be moved back so it functions as more of a sunroof if you just want a little bit of sun. But, and it’s a big but, for all the upsides of its convertible-ness (which we’ll get into later), the roof does come with its fair share of downsides, chief of which is visibility. 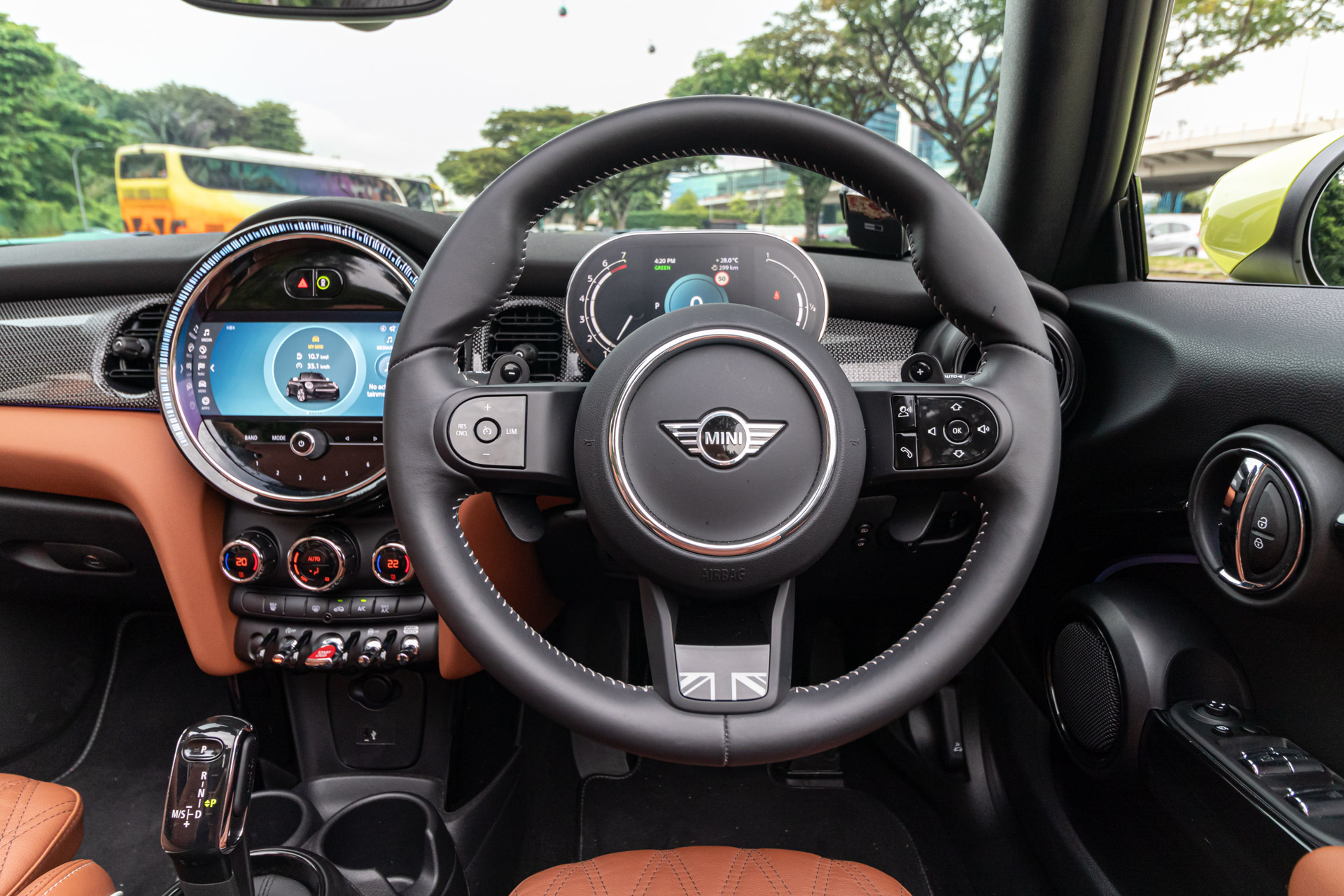 With the roof up, the blind spots are pronounced as the supporting pillar of the roof blocks your eye line. With it down, you obviously gain all the side visibility back but because the roof merely sits on top of the rear deck and not inside it, it completely obscures your visibility through the rearview mirror.

Other downsides include the tiny boot space - although MINI has kindly added an Easy Load function that lets you raise the boot opening when the roof is up to aid the taking out and putting in of things.

There is also a fair bit of cabin noise when driving. 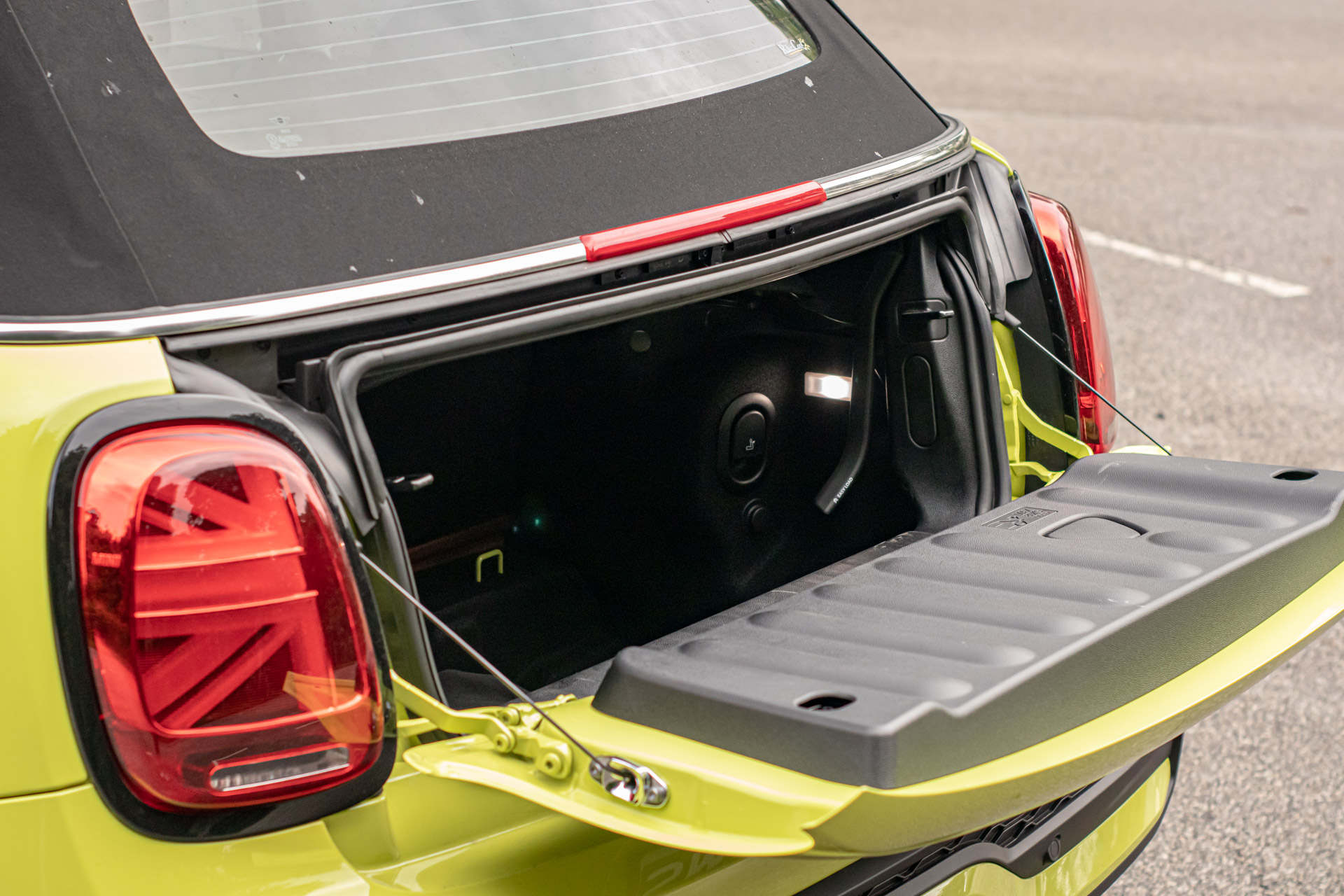 Although not brilliant with the roof up, the speakers are well suited for blasting your tunes with the top down, so you and your 1.5 friends can fully take in the convertible experience.

We say 1.5 friends because rear space in the MINI is quite the commodity. Consider the MINI Cooper S Convertible as a two-seater because unless your friends or family are children, extremely short, or extremely short children, you’ll struggle to fit anyone in the rear seats. 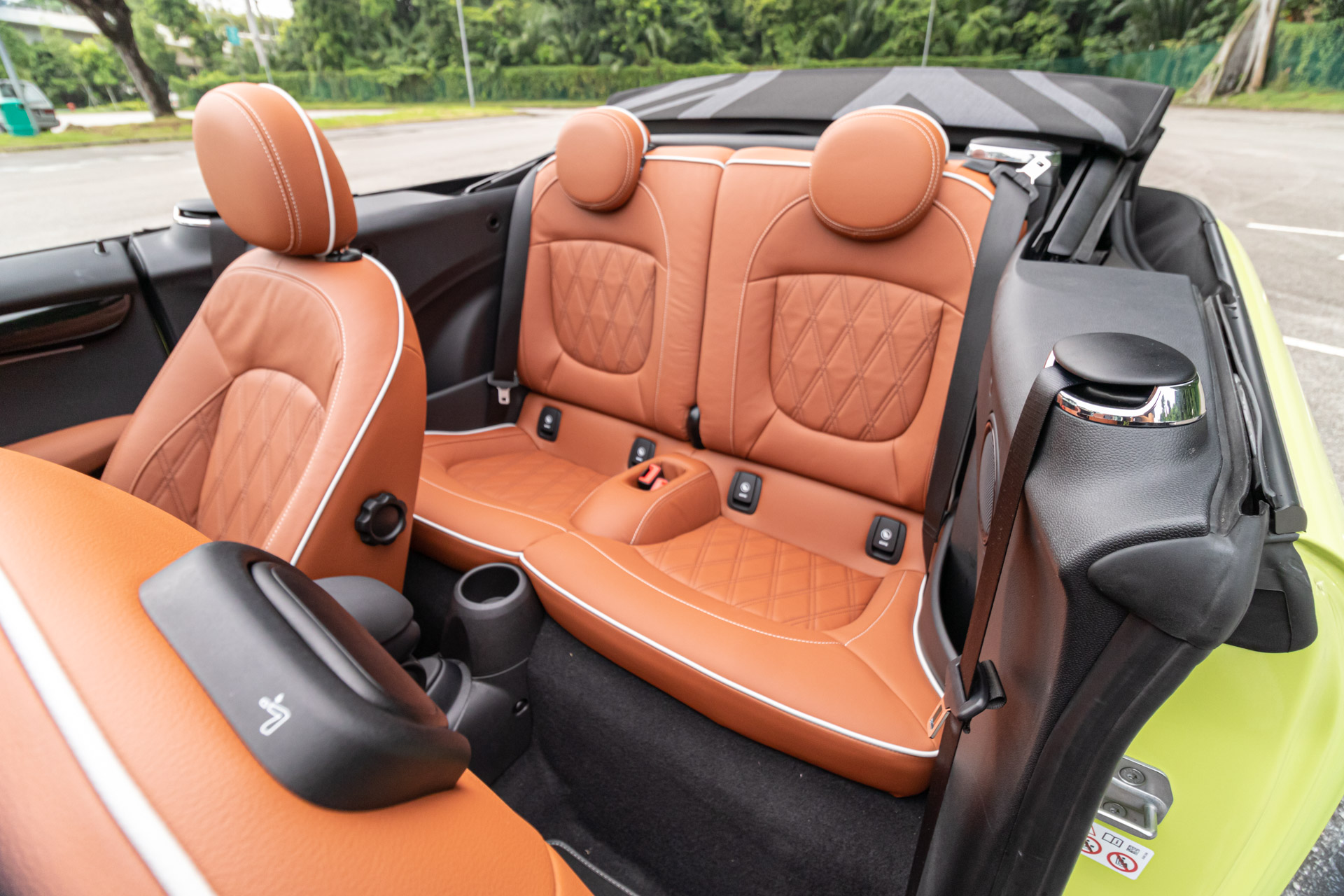 Dynamically, the MINI Cooper S Convertible is quite a mixed bag. The MINI is powered by a 2-litre turbocharged four-cylinder that puts 176hp and 280Nm of torque to the ground through a seven-speed dual-clutch transmission. 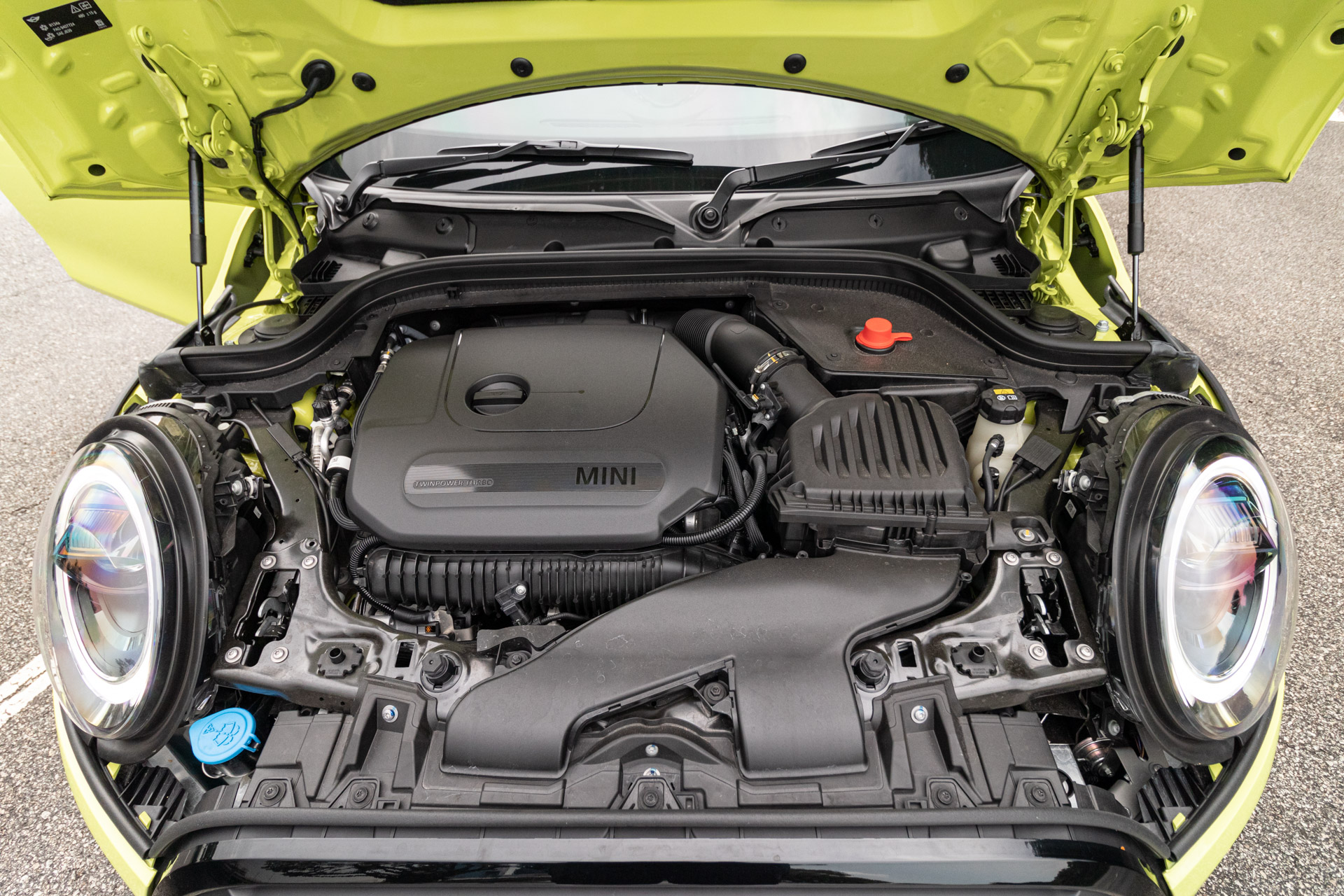 That’s more than plenty for a polite shove every time you prod the throttle. And as an added bonus, the car makes whooshy turbo noises which are always fun.

The ride in the MINI though is quite stiff, presumably to compensate for the loss of stiffness due to the convertibleness of the car. It’s worked rather well though, with body flex through corners kept to a minimum.

In the curvy bits, the MINI has a fantastic turn-in response and punches out of turns with ease. Where it suffers is on the brakes.

As it was in the MINI Electric, the S Convertible's anchors are nowhere near what you’d call confidence-inspiring. Under heavy braking, the pedal feels mushy and it can sometimes feel like the brakes simply aren’t biting enough. 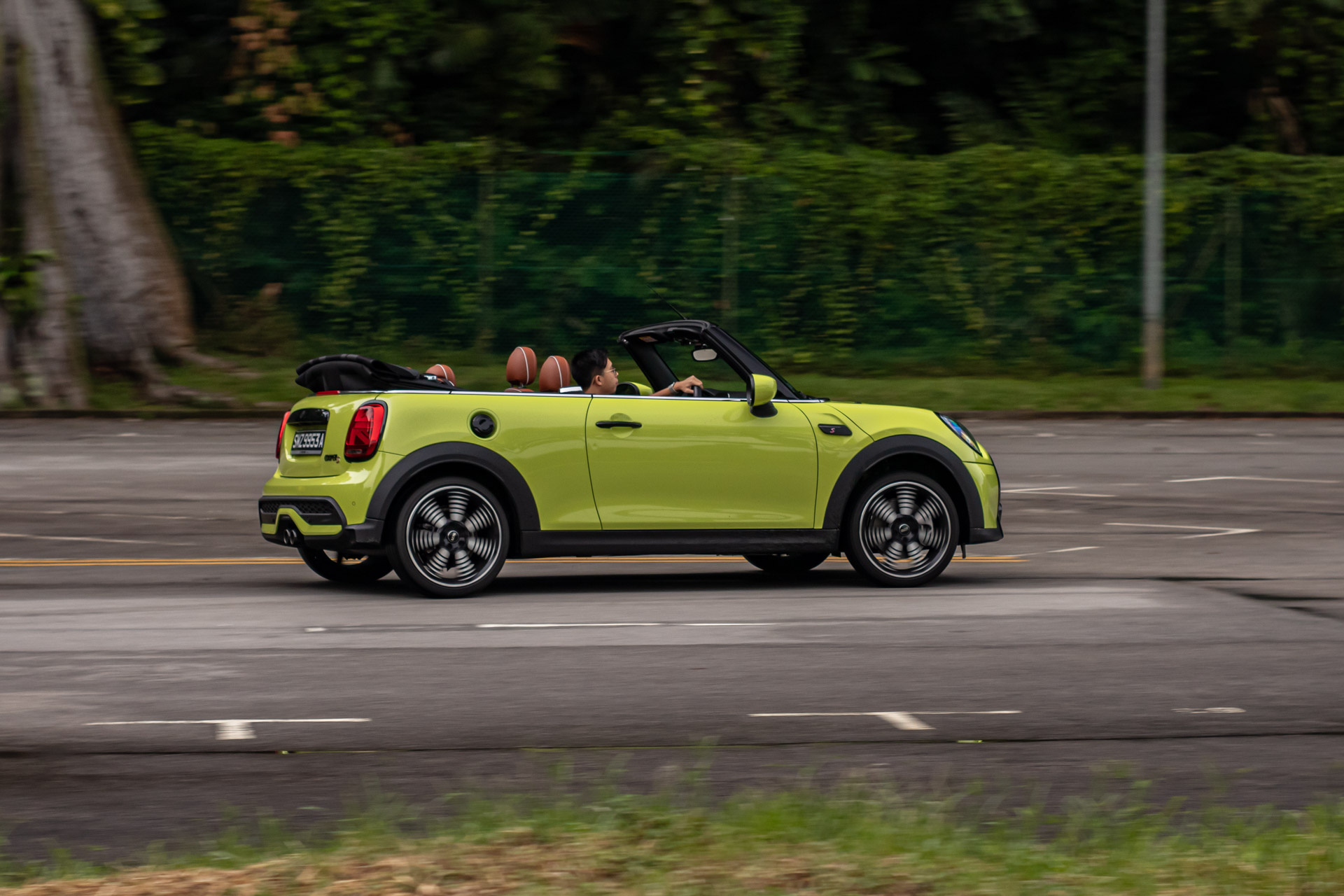 Where this car absolutely shines though is on a night out.

Picture this, there’s a cool wind blowing, the moon is shining bright in the night sky, you’ve got your girl sitting pretty in the passenger seat and your favourite music is wafting through the air.

That’s what this car was built for and it accomplishes that beautifully. People (especially the ladies) love this car. Your friends will fawn over it and other MINI owners on the road give you a wave or a thumbs up. It’s such a friendly, wholesome experience with nothing but good vibes oozing out of its every wheel arch.

Is it practical? No. Is it affordable? No. 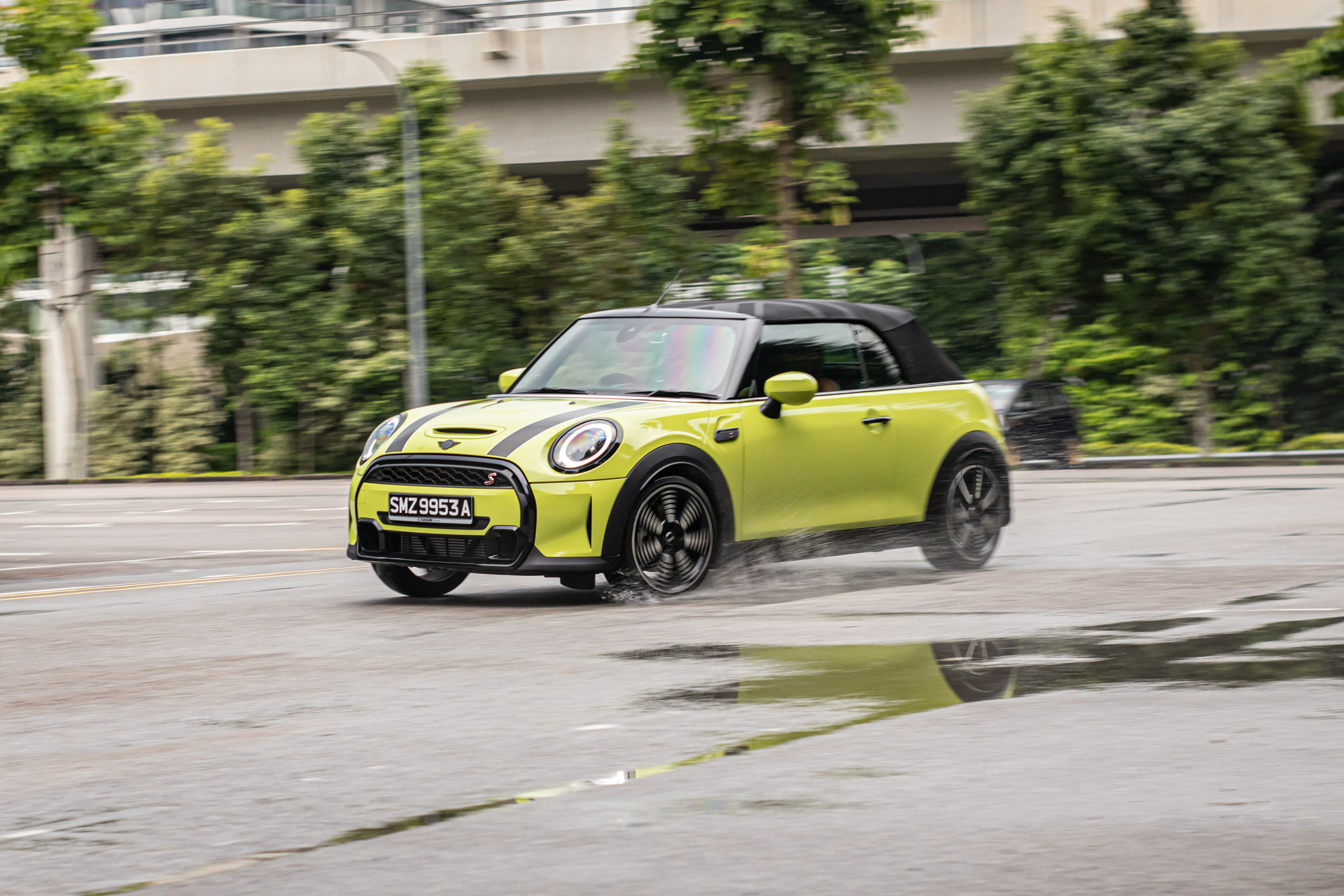 But what it is though, is a lifestyle. We never understood why people bought cars like these before but we definitely do now.

We thoroughly enjoyed every moment we drove the MINI Cooper S Convertible and if you’d like to check it out for yourself, head on down to the MINI Habitat here.