In The Passenger Seat: Greyturd's Honda Accord Wagon and His mReviews 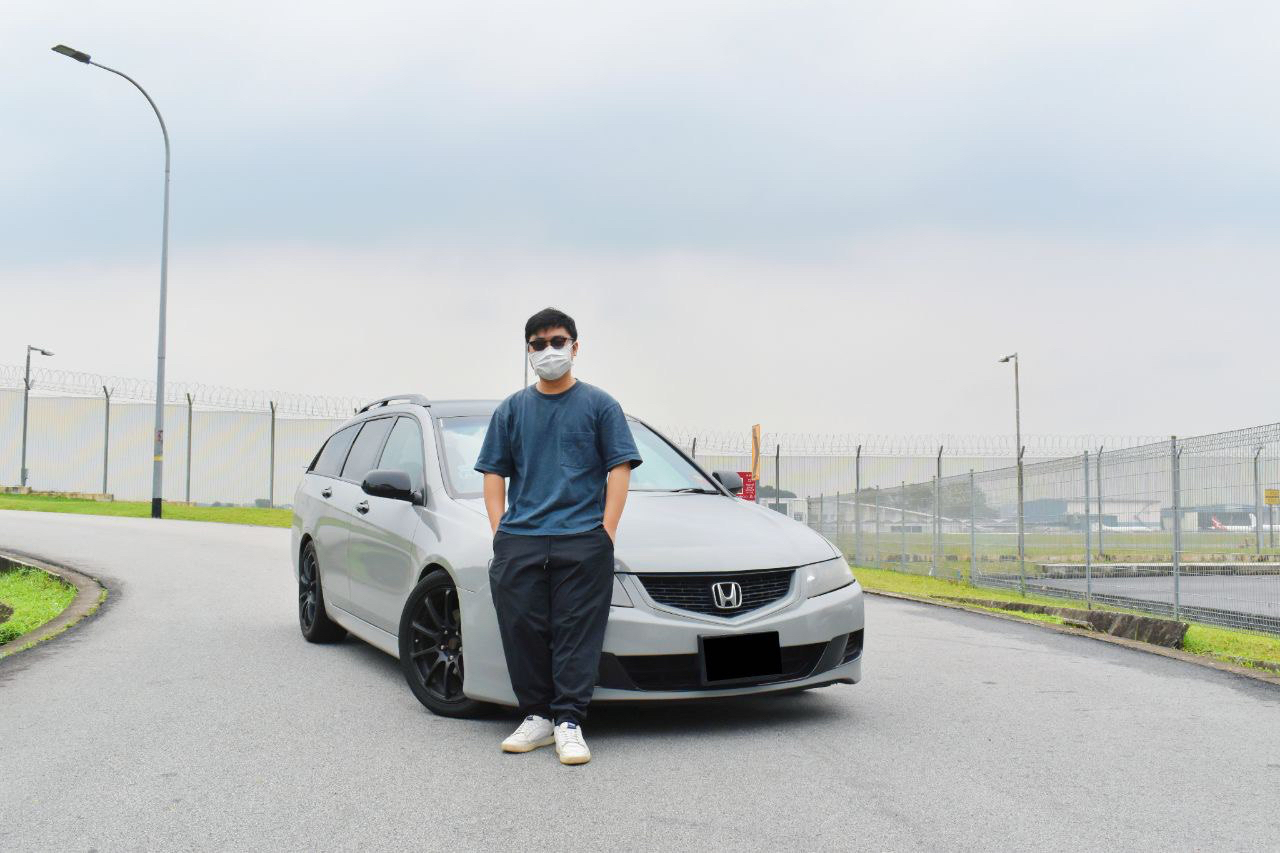 He's the owner "The Hearse", one of three Honda Accord Wagons in Singapore. In this edition of In The Passenger Seat, @greyturd shares his wonderful story of how he managed to snag this car, and his experiences as a resident writer for Motorist!

He's a pretty shy guy, but behind @greyturd's shades and mask is a chap who has a genuine passion for all things automotive. The man has a knack for finding good car deals, as his Honda Accord Wagon is his 4th car at the age of 25.

We're delighted to have one of our mReview writers share how he got into cars, his experiences writing for us, what his favourite mReview car is, and how he ended up in a WhatsApp chat with the other 2 Honda Accord Wagon owners.

Let's get right into it. 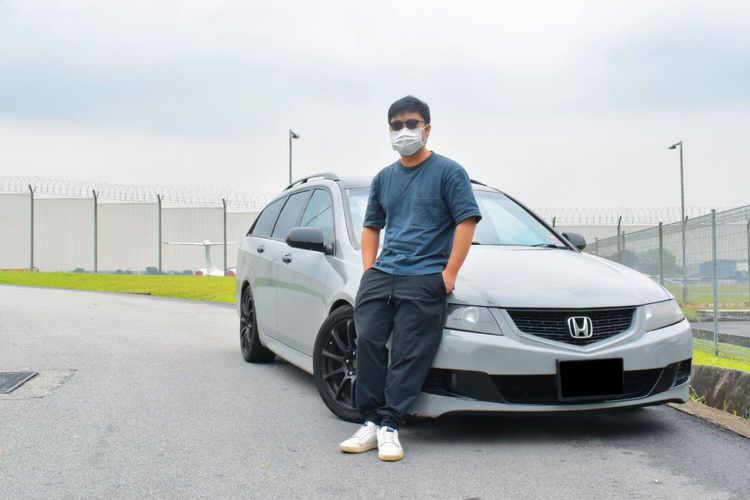 I’m @greyturd, 25 this year and a recent fresh graduate. I also review cars on a freelance basis for Motorist. #OwnselfFeatureOwnself

For the people who don’t know about your car, how did you manage to get it? 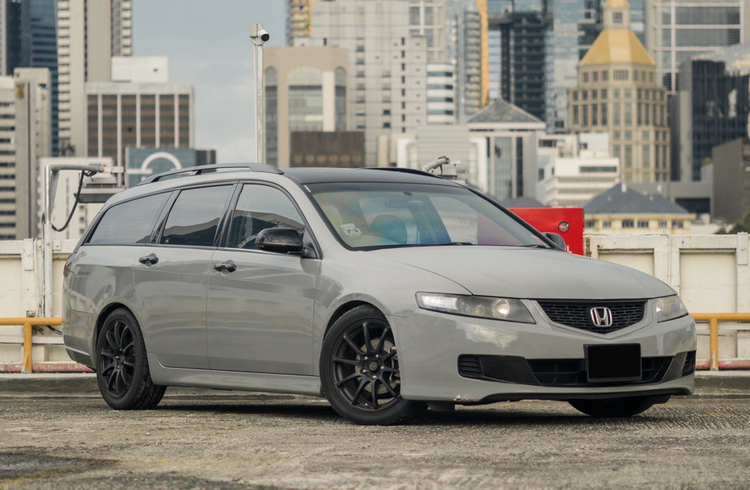 The Honda Accord Tourer was really just a happy accident. Before it, I was driving a Honda Accord CL7, which I accidentally sold to my friend.

I say it was an accident because I went to view an old Mercedes out of sheer curiosity on a Monday night, and somehow, the very same night, word had already gotten around that I might be selling my CL7 for that Merc. For that, I have to blame my good friend Vikram, who was the co-founder of OfficialSECS, and a friendly figure in the car community.

After viewing the Merc, I headed to Serangoon Garden for supper, and that was when one of the E34 twins showed up to make an offer for my CL7. The price was right, so the car literally changed hands just like that at 3 am over supper.

The whole affair was so sudden that it was only when I got home that I finally processed that I no longer had a car, so I quickly started looking for a replacement.

I immediately looked to Kruise Automotive, a Motorist used car dealer partner with an interesting collection of cars for sale. In fact, they sold me my very first car, a 1992 Toyota Corona! By the end of Tuesday, I was the happy owner of a Honda Accord Tourer.

When you finally got the keys to your Honda Accord Wagon and took it out for its initial spin, what thoughts were running through your mind? 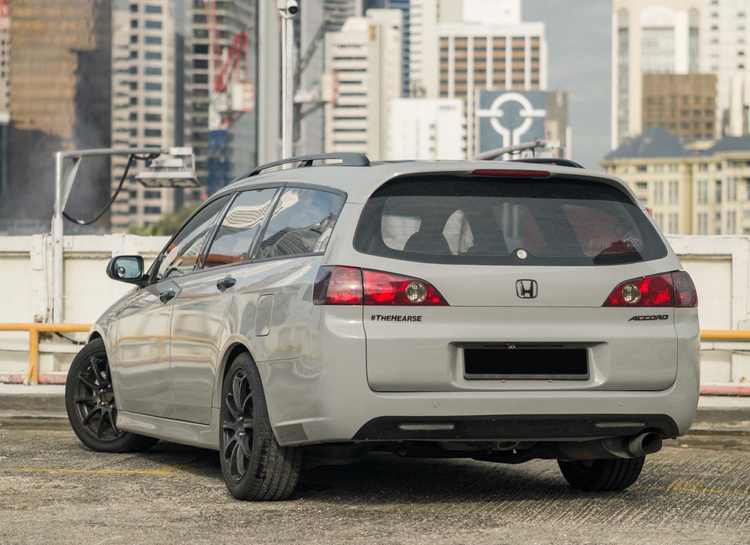 Honestly, the first thought I had was “do I have enough money to fix her up?”.

The Accord Tourer felt like it had some major issues with its transmission, and the previous owner also left it with a set of rims that had terrible fitment, so the first impressions really weren’t that great.

I’m thankful I took the leap of faith to make the purchase, though!

There are only 3 Accord Wagons in Singapore. What are your thoughts on being one of 3 owners? 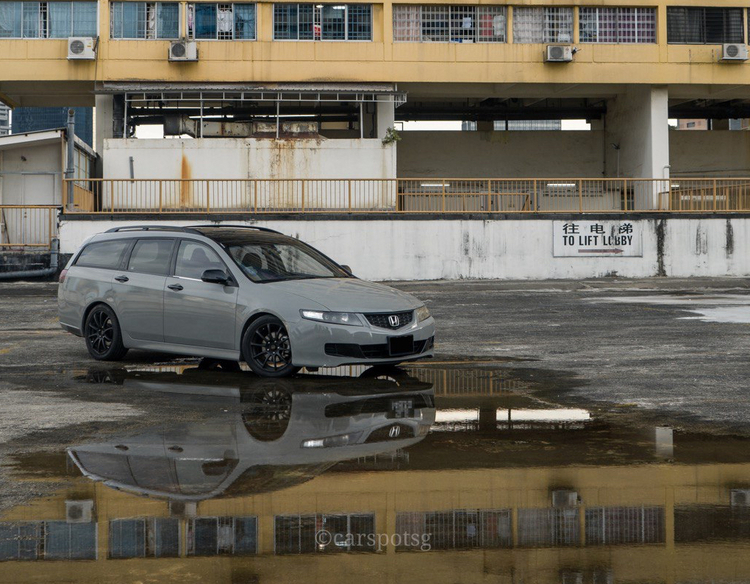 The modifications on my wagon make it fun to drive, but the support from the car community has made the car really fun to own as well. I’ve had quite a few encounters of other drivers and even bikers doing double-takes when they see my car, and then following me into the carpark to ask about my wagon.

It’s definitely flattering to see the appreciation for the wagon, and I’ve made some new friends since I’ve come to own this car. All 3 of us Accord Wagon owners now know each other, and we have a 3-member only chat group.

How many cars have you owned, and where does this car sit for you across all the other cars? 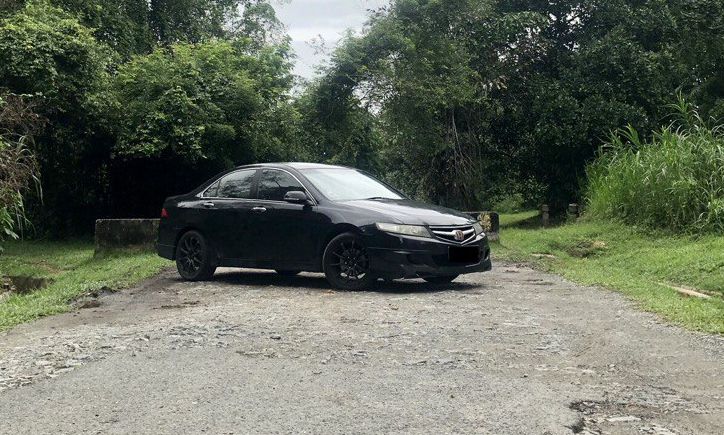 So far, I’ve owned four cars: a 1992 Toyota Corona, a 2006 Nissan Sunny, and then the Accord CL7 before arriving at my current wagon. 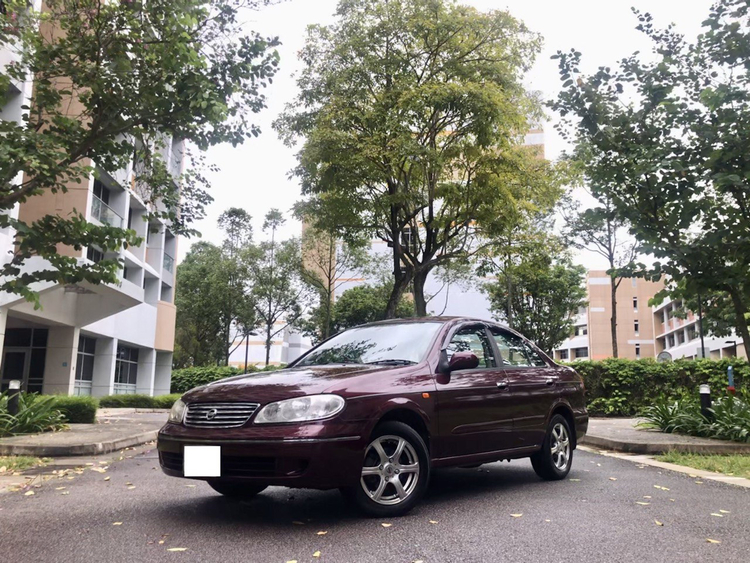 The Accord Tourer is by far the “coolest” car I’ve owned, and is probably the nicest to drive as well. I always get egged on by the exhaust to bring the revs higher, and the handling modifications make her a dream to chuck around B-roads. 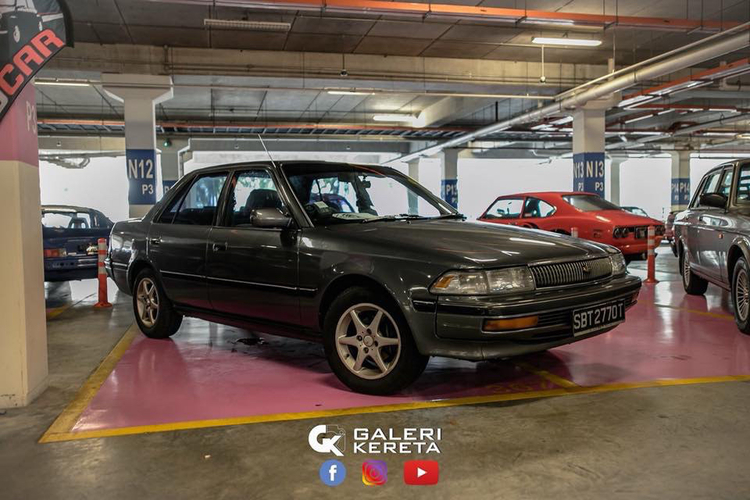 However, there’ll always be a special place in my heart for my very first car, the Toyota Corona. Its 4-AF engine was a thorough workhorse, and the manual transmission still felt great after all the years of use. Coupled with its retro velour interior, it really gave me an experience of the yesteryears I never got to live in.

As an automotive writer and racer, how did you get into cars, and what was your earliest memory of it? 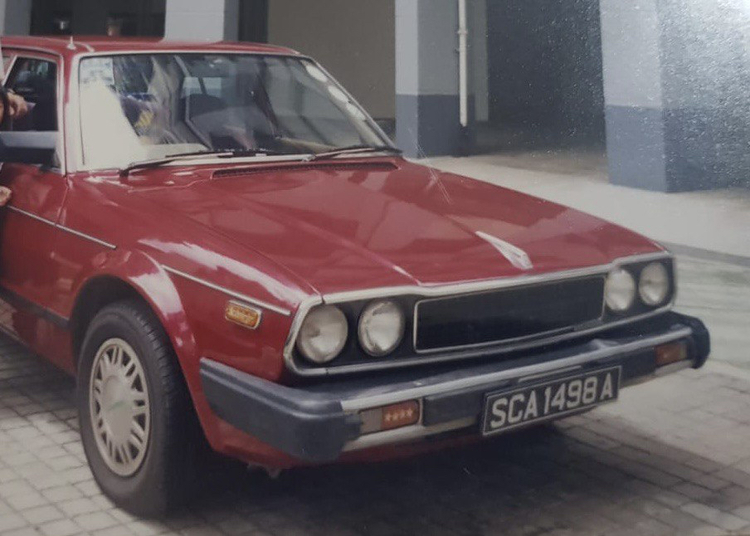 
It probably started with my dad’s first car—a first-generation 1980 Honda Accord sedan.

The car constantly broke down, and I recalled being strapped to the child seat and screaming for my dad to quickly push his car, which broke down in the middle of a major cross junction. Traffic came to a total standstill while everyone watched my dad laboriously push the car to the side of the road! 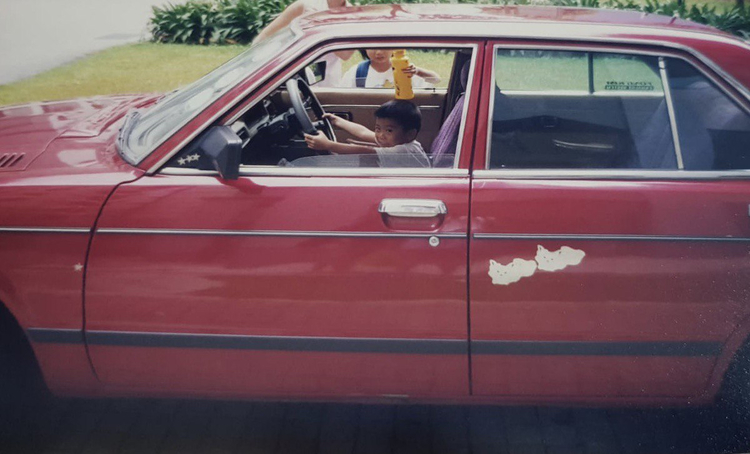 
The constant breakdowns were also how I learned as a toddler from my dad about how manual transmissions and carburettors worked.

You’re also a racer. How would you describe your growth from your first race compared to your most recent race? 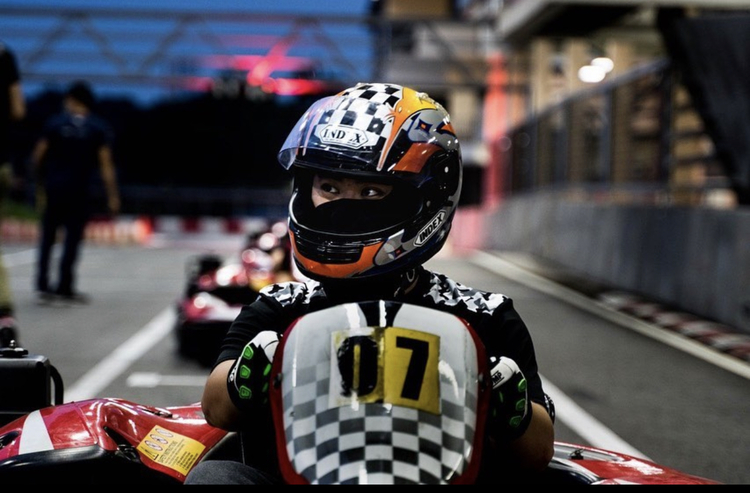 I’m merely an amateur, but my first race, which was a team endurance race, was definitely an eye-opener that taught me many lessons (if you know, you know).

I’m fortunate to have met more professional racers who gave me pointers for improvements. I would also like to thank EduTorque for their support.

Although I’m still ranking only in the middle in races with more experienced drivers, I look forward to learning and improving further.

As one of the writers for Motorist’s mReviews, what was your favourite car to test drive? 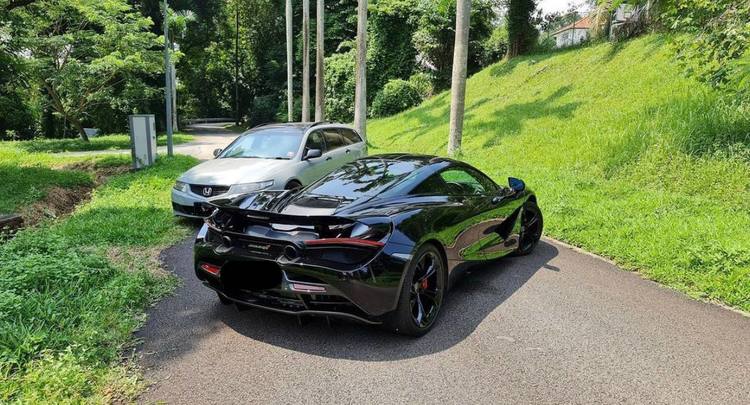 Tough question. The perk of writing for Motorist’s mReview is that I get to experience a lot of vehicles.

The Ford Ranger was an interesting one, but my favourite is either the Alpina B5, the Cupra Ateca, or the McLaren 720S.

Would you rather, Continental or JDMs?

I don't think this is a useful distinction, so I don't really have an answer to this. I tend to look at the capabilities of individual car models, rather than judge them by the badge they're wearing on their bonnets.

What is your dream car? Why? 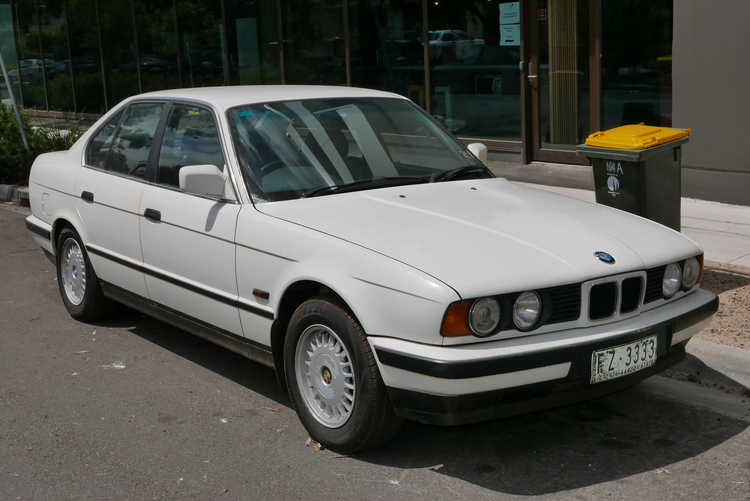 It’d probably be a BMW E34 5 series. I’ve gotten the sense that older cars have a more mechanical appeal, and are built to last, whereas most new cars are like fast fashion that have to be replaced every 5-10 years for something else. 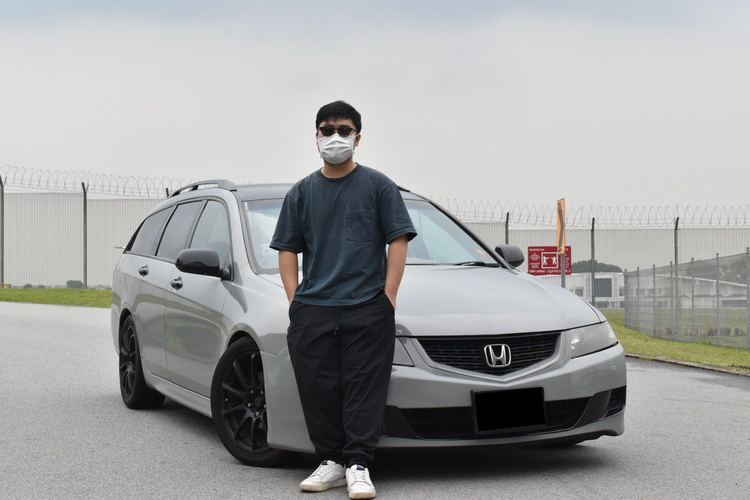 It’s a small community, but I see distinct groups with different goals. There are people who are in it for the best motoring experiences, but there are also others who are chasing for likes and influence.

These groups aren’t always mutually exclusive. With the cost of motoring in Singapore, I have equal respect for anyone who has an actual passion for cars, regardless of what they drive. I hope this is a view that other car enthusiasts share as well.

Thank you very much @greyturd for being on this episode of In The Passenger Seat. Read his latest mReview article on the Mclaren 720S here!