In The Passenger Seat: Irfan & Irshad, the BMW E34 Twins 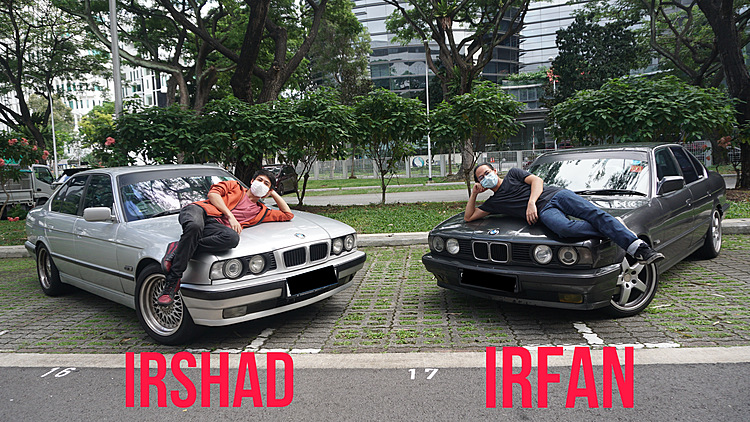 This viral video could have gone two ways; a horrible accident OR a lucky escape. Thankfully, it’s the latter. Whether you’ve seen the video or not, you can’t deny it takes some mad skills to avoid a near fatal accident at the last minute.


As you can tell in the video above, there was a driver who swerved away from a stationary car and another who recorded the footage. Both drivers reacted instinctively, as if they had some sort of telepathy. Well, you’d be surprised to find out that the drivers are not only brothers, but twins!

Irshad (driver who swerved) and Irfan (dashcam driver) are definitely an interesting and humorous pair and have kindly accepted this interview to share more about the incident. Both of them also own a BMW 520i E34 each. Yes, that’s right, they both own the same car model, and work at the same company too!

So, was it reckless driving or fast reflexes? Let’s find out:

What’s the story behind the BMW 520i E34? Is it a twin thing to own and drive identical cars? 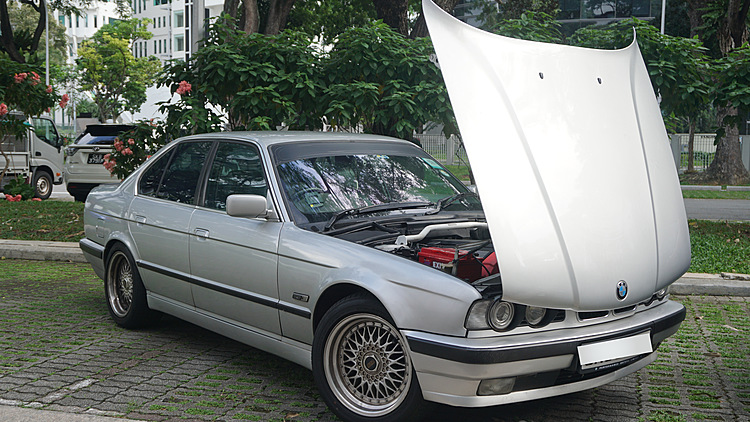 Irshad: Our previous car was due for scrap. During the search for a replacement car, Irfan stumbled upon the Silver E34. We both wanted this model as our Baba (father) had this when we were young.

Lucky for us, my oldest brother also spotted another E34, a dark mineral grey/brownish one. Lo-and-behold, both were from the same dealer. We rushed down to the dealership and test drove the Silver one because it was easier to get out of the lot.


Our plan was to make our cars “same-same but different”.

Irfan: Car enthusiasts would know this feeling when a car is calling out to you. When I started the engine, the car roared to life and gave me that feeling that I should bring this car home.

Unfortunately, during the pre-purchase inspection (PPI), I discovered my car had leaks around the engine bay. It also had a more worn out undercarriage. However, I still decided to take the “worse-off" car and let Irshad have the better one.

Your driving video went viral earlier this year. Could you provide a first-hand account of what happened?

Irshad: It was around 6:10am when Irfan and I were on the way to work. We were mostly driving on the middle lane, until it started slowing down to 60 to 70km/h. The traffic was light due to the Circuit Breaker (CB), so there were pockets of space on the road.

We slowed down as we noticed there were two vehicles on the road shoulder and some debris on the 2nd and 3rd lane. Assuming that the accident was on those lanes, we proceeded to the 1st lane, slowing down gradually.

From the bend, all I saw were bushes where the crash barriers were (because of my seating position and height in the car). However, I started noticing that the White GT86 started braking. I depressed my brake pedal a little and checked my rear-view mirror. I was probably driving around 70-ish km/h.

As I redirected my eyes forward, I suddenly saw a set of brake lights from the stationary car. Instinctively, I turned my wheel to avoid a collision. Because I was so close to the GT86, I countered my wheel, released my brakes and hit the accelerator to add weight to the rear of my car to gain traction, preventing a spin out.

After the ordeal, I slowed down and glanced at the left and rear view mirror to look for my brother. Noticing that the stationary car did not lurge forward, I was relieve that he didn’t rear end the stationary car. Thankfully, he was driving on the 3rd lane with a puzzled look on his face. 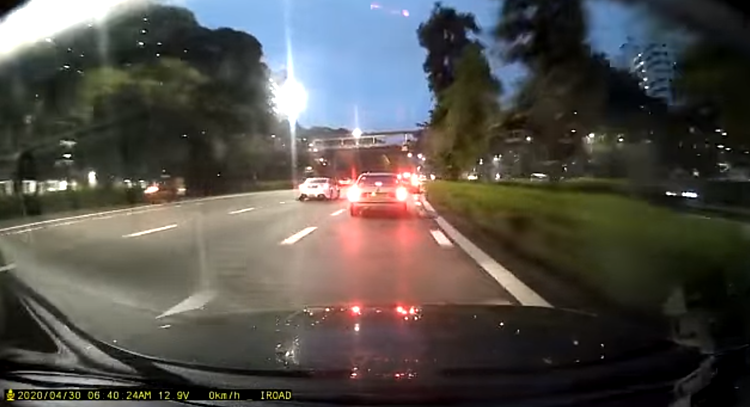 Irfan: I was just following Irshad’s lead, following the 2nd lane most of the way until after the flyover to Tampines Ave 5. That’s when we caught up to a couple of cars and decided to go to the 1st lane to overtake. As we were approaching the corner, I saw debris on the 2nd and 3rd lane, including a bike and car at the shoulder. I proceeded as usual as I thought the accident had occurred on those lanes.

I then saw the White GT86 and Irshad starting to brake. Knowing how Irshad drives, I knew something was amiss. Because of the thick bushes, I couldn’t see ahead of Irshad. I released my throttle and did a quick check on my rear view mirror to make sure that coast was clear, just in case.

Suddenly, the familiar tail lights of Irshad’s car vanished and a pair of unfamiliar MPV brake lights appeared. I did a hard left and crossed two lanes to avoid the GT86. Because of the damp road and sudden weight shift, my rear end came loose. Mind you, these cars have no Active Stability Control (ASC) or even Traction Control (TC). It was totally an Initial D moment. I had to counter-steered, throttled on and fixed the slide while overtaking the slower moving GT86.

After that ordeal, I looked over to Irshad and saw his surprised face. He was probably shocked that I was still in one piece. However, that was the most ball-shrinking moment in my seven years of driving.

Online opinion was divided. Some claimed that both of you did well to avoid a crash, while others suggested that it was reckless driving. What do you have to say about this? 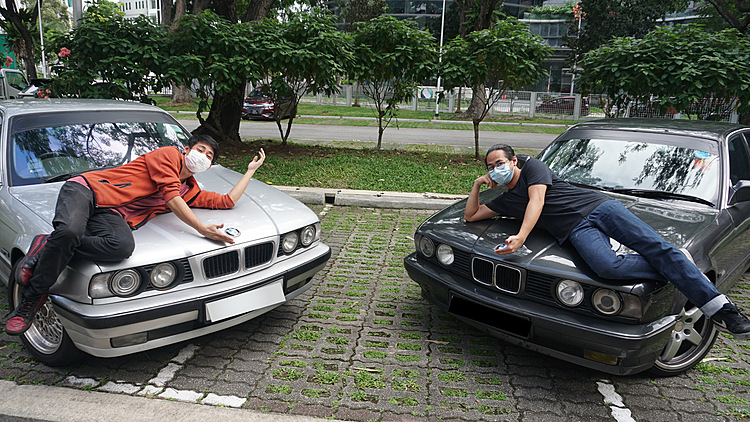 Irfan: I did notice a lot of keyboard warriors commenting that we were racing and driving recklessly, and how we could have caused a more serious accident. However, in my honest opinion, rear-ending the stationary car would have caused an even worse accident. For those naysayers, all I have to say is please more aware of the situation before accusing us of racing.


Irshad: I believe people are entitled to their own opinions but it’s always better to make a more educated assumption. People should realise that the driver’s point of view (POV) and the camera’s POV are totally different. Just because some cars were driving faster than others, it should not suggest that they were speeding/racing/driving recklessly. Has anyone played a part in influencing your love for cars, or in both your cases, the BMW 520i E34?

Irshad: Our father has been the biggest influence for our love of cars and also the main reason why we admire the E34 so much. He had one when we were in primary school and we often went on road trips up to KL for breakfast. It was a car that we loved and grew up with.

We told our father that when we grew up, we wanted to own one. He mentioned that there would be better models eventually. True enough, the E39 or E60 were already on the roads but the urge to own a E34 was just too strong.

Irfan: It started with our father laying car magazines around the coffee table. Then our elder brothers started playing Need For Speed II and we got hooked on that and the many series after.

But the love for the E34 series was clearly because of our father. I actually followed him to test drive the Oxford Green BMW 520i E34 24V back when I was in primary 3. It was during that test drive when I fell in love with that car.

The comfort, how sturdy it felt, and at that time, the power. All those feelings happened at an early stage of my life. I loved it dearly and the urge to own one never died. Hence, I have no regrets owning it today.

Another reason why I love the E34 so very much is because of the space! The car is super spacious by today’s standards. Don’t believe me? Just ask my friends who have sat in the back of my car.

How do you guys keep your cars in such great shape? Any tips to share for maintaining a vintage car? 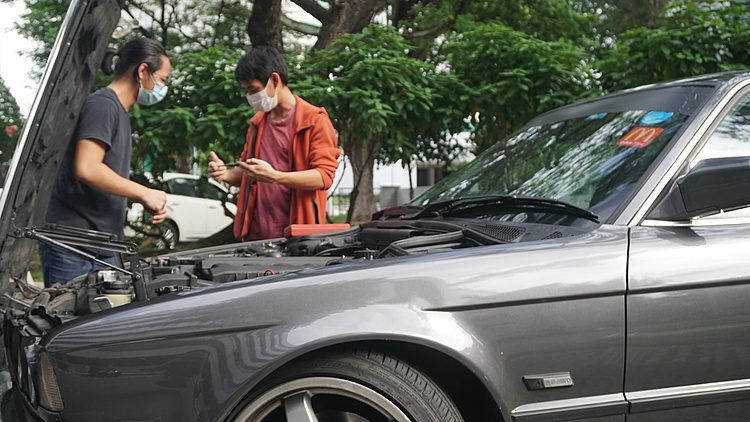 Irshad: I wouldn’t say they are in great shape but it is getting better. Two things: Regular maintenance and TLC. Older cars tend to have more parts that are wearing and given that it went through multiple ownerships, you wouldn’t know how well the previous owners would have maintained it. It’s best to do a PPI before purchasing a used car. From there you’ll find out what needs to be fixed or replaced. Also, do research like parts sourcing, availability, affordability and how Singapore vehicle ownership works before buying a car.

Irfan: To be honest, it’s far from great but it’s a work in progress. Having such an old car, nothing ever goes as planned. One day, you have fixed all that needs to fix. The next moment, the car tells you that you have “missed a spot”, leading you to pull out your wallet. So be sure to get the most crucial wear and tear parts fixed first.

For example, if it’s leaking, get it fixed before it gets worse. Refresh the undercarriage components, suspension and brakes if they have not been replaced yet. And after all that, continue with regular maintenance such as oil and filter change. It is best done before 10,000km for added preventive measures.

If you had to trade in your BMWs, what car would you replace it with and why? 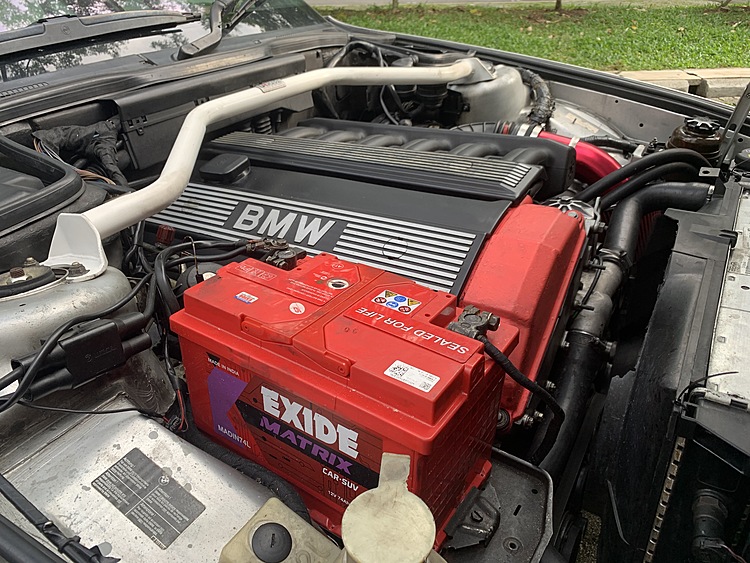 Irshad: That is a tough question…SKIP! In all seriousness, this has never crossed my mind but if I really had to, I’ll get another old car. Probably something mechanical that I could work on.

Irfan: Trade in my BMW? Really never thought about that. Probably another old BMW? Or a Toyota Corolla AE101, which is a car that my grandfather used to own. It’s a handsome car when done right.

Looking at your IG posts, it appears you guys have spent a fair bit on car modifications. Could you share what modifications were done on your respective cars?

Irfan: Very minor cosmetic mods mostly. Nothing much on performance. I did an ECU Eeprom change to make the engine run as it should. I coupled it with larger wheels and tyres, and complimented it with a Bilstein B12 Pro-kit suspension upgrade. I also swapped to a slightly large ventilated front brakes from the V8 variant of the E32/E34 models. Which reminds me, my rear brakes will be swapped in soon. All mods are Original Equipment Manufacturer +.

What is your worst driving habit? 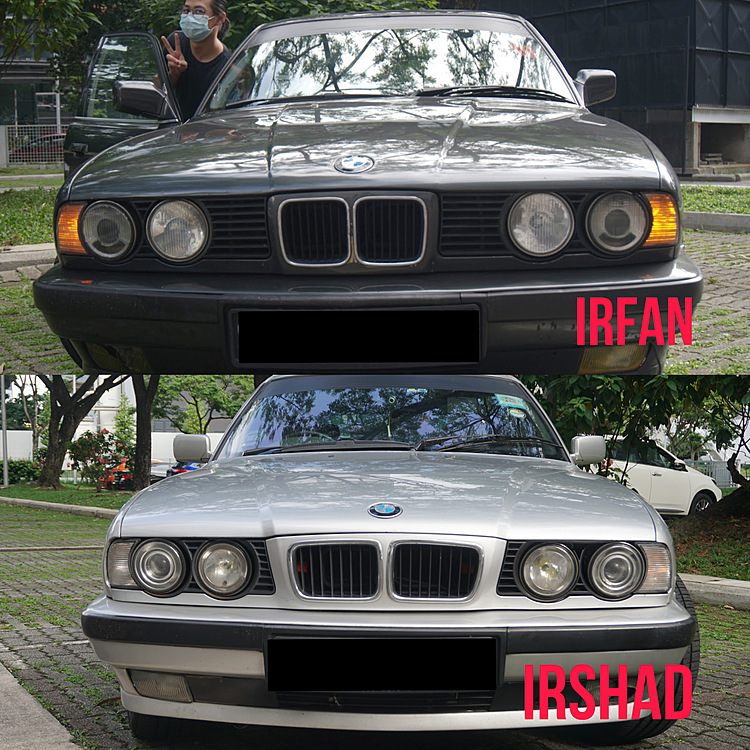 Irshad: Some of my friends find it annoying that I use my indicators a lot. Is that bad? I have to top up my indicator fluid quite often though. Also, I’m quite heavy on the pedal when I accelerate off the lights.

Irfan: Like my brother, I’m very heavy on the pedal when the light turns green.

You guys seem to know a lot about cars. Was taking your license a breeze?

Irshad: Oh no, I took my practical test three times. The first time, I’m guessing it was my all-black ‘trying to steal your car’ outfit that put the tester off. The second time, I failed with similar mistakes during the first test. The third and final time, the instructor gave me a pass all the while explaining what mistakes I made but I was too elated to catch most of what he said.