The venerable Ford Ranger is undoubtedly a working-class hero, but it has gone so upscale that even the bourgeois might want to have a go in it!

What comes to mind when you hear about a vehicle that comes equipped with a 2.0 litre twin-turbo engine packing 211hp and a whopping 500nm of torque? A performance car perhaps? What if we told you that it’s equipped with a ten speed automatic transmission and comes with selectable four-wheel-drive? And what if we told you that this vehicle also comes with auto headlights and wipers, front and rear parking sensors, dual-zone climate control, a reverse camera with dynamic guiding lines, and even has an automatic parallel parking feature?

Whatever vehicle you have in mind, it probably isn’t the Ford Ranger pick-up truck, and that’s what makes this mReview so special—we’re testing a pick-up truck that behaves more like a luxury SUV! But first, let’s take a look at the more practical aspects; this is, after all, a pick-up truck. 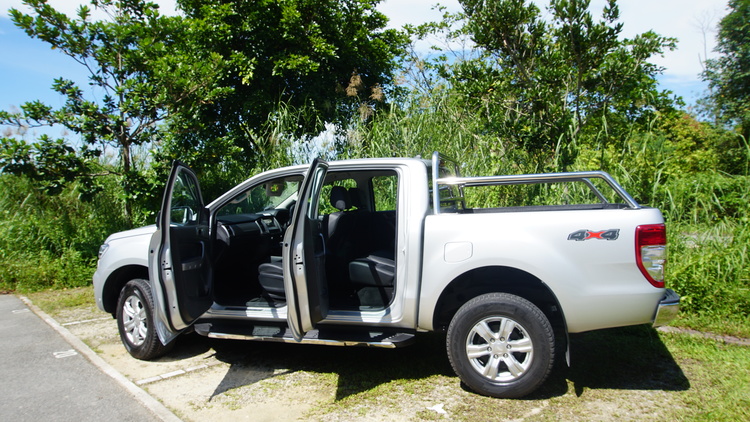 The variant that Ford’s Singaporean dealer, Regent Motors, has brought in is the double-cab Limited trim, which means that it can carry 5 passengers in air-conditioned comfort. 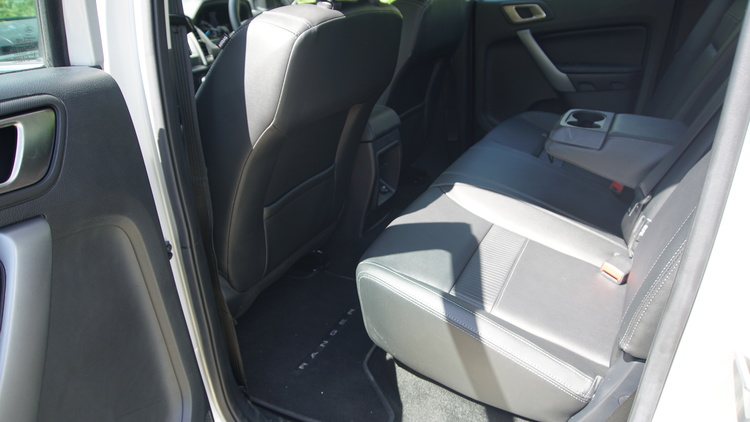 The rear seats are wide and spacious, and offer a good amount of legroom. The front seats are also designed such that rear passengers can slide their feet underneath them, giving more legroom, and there is only a slight hump on the floor due to the truck’s high ride height, which means that the middle-seat passenger won’t be seated uncomfortably. Not only does the rear seat bench fold down it is also capable of folding up for you to carry taller items in the unlikely event that you find the 5-foot truckbed to be insufficient for carrying your cargo. 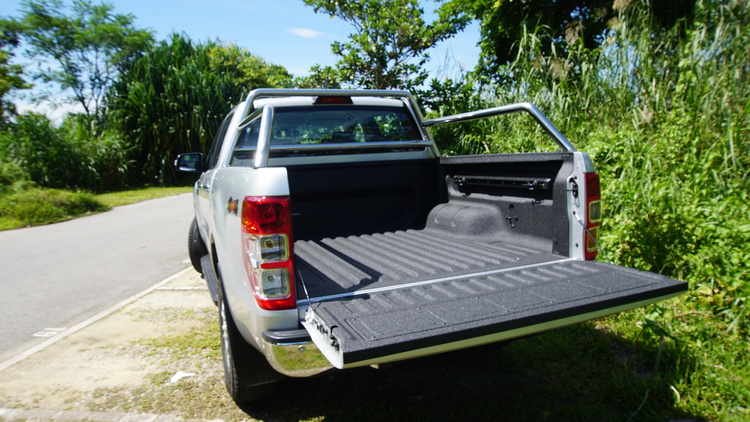 On that note, the truckbed is immensely practical, with a tailgate that drops down to hip height, making loading and unloading of goods extremely convenient. Ford has also provided a light mounted at the rear of the cab, which helps to illuminate the truckbed at night. One may expect a pick-up truck to be industrial and built to a cost, but Ford has outdone themselves by placing attention to detail to make everything just that bit more practical and user-friendly.For example, side running boards come equipped for you to step on, making climbing onto the massive truck more convenient. Ford has also equipped the Ranger Limited with a multi-function steering wheel that allows you to use voice recognition to control the infotainment system (thought the functionalities are quite limited), and access other features like cruise control and the speed limiter. One sorely lacking feature is keyless entry and start, which we would expect in a vehicle costing S$131,888 (as of the time of writing). 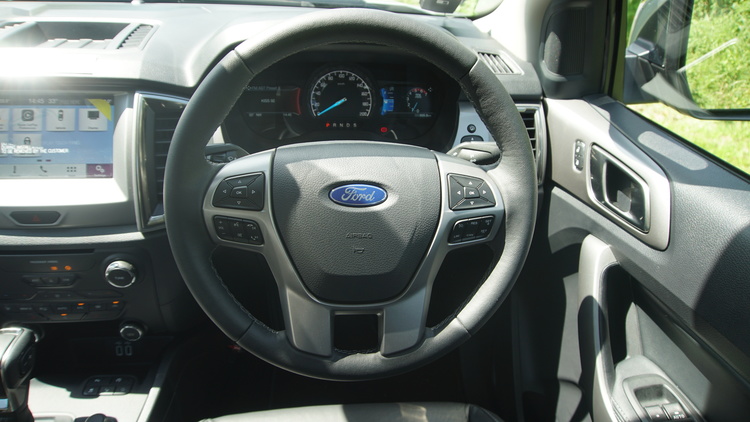 Up front, the driver also gets to enjoy an 8-way electric seat with manual lumbar support, and a chilled centre console box. The centre stack features a 6-inch touchscreen SYNC infotainment system that is both Apple CarPlay and Android Auto compatible. Ford has also given the Ranger Limited a semi-digital dash, with a physical speedometer in the centre and a pair of full-colour display screens flanking either side of it. Not bad for a pick-up truck! 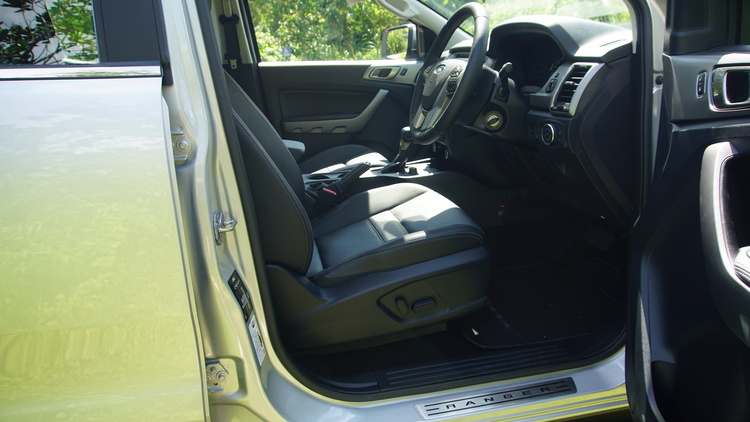 The only complaint that we have about the interior is that there is excessive use of hard plastics. Furthermore, Ford’s SYNC infotainment system also comes with a design and colour scheme that is more appropriate for a child’s “My First Tablet” than a vehicle infotainment screen. However, the Ranger redeems itself because the SYNC infotainment system is extremely intuitive to use, and doesn’t require the toggling through of multiple menus and options to get to whatever feature you want to access, which unfortunately is the case for many cars nowadays. Additionally, the hard plastics are an assault to one’s tactile senses, but they are well-built and do not creak or rattle, and after all, you do want a practical, long-lasting, and easy to clean interior in a pick-up truck, don’t you? Ford also makes up for the hard plastics by wrapping the steering wheel—an important touch point—in thick and luscious leather, making it genuinely far better to grip than steering wheels in other luxury cars.

One feature we were really surprised by was the automatic parallel parking feature. Once again, Ford has made this high-tech feature easy to access and use, unlike in other cars that feature the same functionality. Check out how easy it was to use: 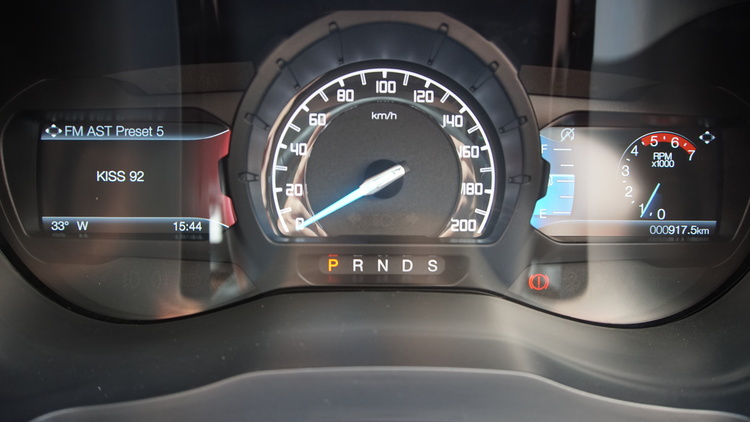 Settle down into the driver’s seat and the first thing you’ll notice is that the pedals are slightly askew to the left. This means that there’s not much space for your left leg to rest. Apart from that, you’ll also realise that you’re piloting a behemoth of a vehicle—even SUVs look like tiny toy cars around you, and you feel simply invincible at the helm of the Ranger Limited.

Step on the accelerator and you get waves of torque propelling you forward. Between the twin turbos and the ten-speed automatic transmission, you simply won’t feel any lack of power at any point of acceleration: the transmission puts the car in the best power band before the turbos spool up to provide you with that extra torque and power.

The truck is also extremely well-insulated. Despite its 2.0 litre twin-turbo diesel power train, vibrations don’t really travel through into the cabin, and although you can hear the diesel engine working, the coarse noise doesn’t really invade the cabin all that much. 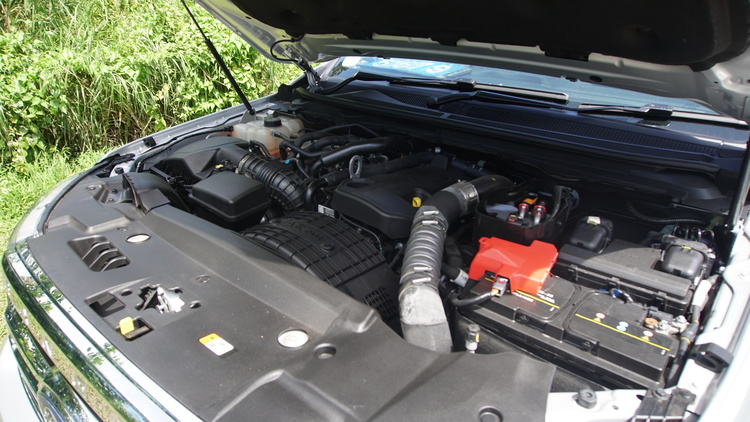 The superb insulation and immense size and ride height of the truck really gives you the impression that you’re piloting a mobile castle on the road, as you’re isolated from all the riff-raff and noise coming from those tiny little vehicles sharing the road with your imposing truck.

The ten-speed gearbox may give the Ranger Limited great fuel economy for a truck (we got an average of 8.1km/l in mostly urban driving), but it also comes with some drawbacks. For one, the transmission tends to shudder at low speed, as though it were a badly-made dual clutch transmission rather than the conventional torque converter that it is. A representative from Regent Motors told us that the phenomenon is likely because the transmission was designed to haul loads, and we were driving without any cargo. The transmission's many gears also makes you feel as though you're driving a CVT, as the truck constantly switches gears to stay in the engine's optimal power band. What you get in return, though, is the ability to cruise at practically any speed at just about 1,500rpm. 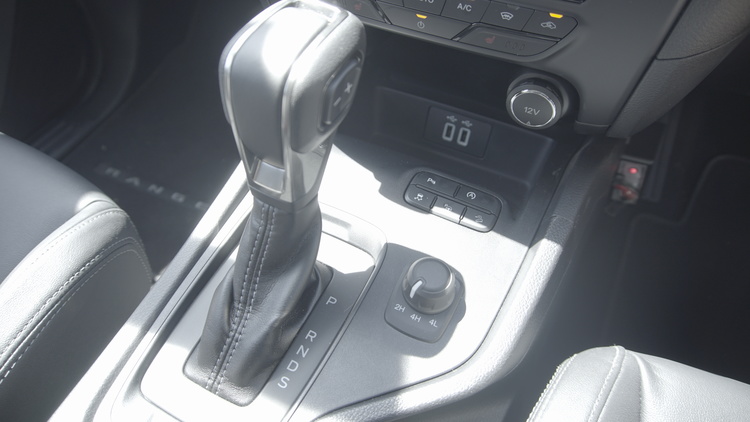 The truck also comes with a sports mode, although we couldn’t figure exactly what changed in that mode. The transmission lever does come with a toggle switch that can be used to change gears in sports mode, however, paddle shifters might have been a better choice considering the truck has ten gears. But this is a truck after all, not a sports car.

The electric power steering doesn’t provide much feedback, but it also isn’t so vague that you can’t have a good sense of how much steering input to give to turn the truck. One quirk it did have, though, was that it would have absolutely no resistance for the first one or two degrees of steering input, before the electric power steering begins to provide the appropriate amount of resistance for the speed that you’re driving. Apart from that, the Ranger Limited does provide good dynamic steering assistance, giving you markedly different but appropriate steering resistance at low speeds, city driving speeds, and highway cruising speeds. 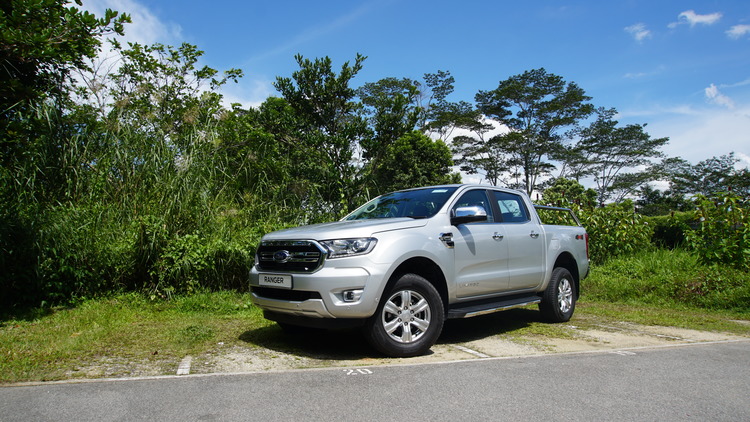 The Ford Ranger Limited is an honest agricultural truck that doesn’t shy away from its industrial roots, yet has so much refinement and features. The Ranger is feature-packed, and more importantly, the features are easily accessible and intuitive to use. What you get at the end of the day is a vehicle with not just practicality and features in the spadefuls, but also personality and charm, and that is something that is hard to find in new vehicles nowadays.

The big problem we see is that the Ranger Limited can only be registered as a goods vehicle, which means that it can only be driven up to 70km/h by law. It is for this sole reason that we find it hard to recommend our readers to purchase the Ford Ranger Limited, although any business owners looking to buy a new pick-up truck should definitely consider this truck.


Pick up trucks have always been practical by necessity for the working class to use, but in the Ranger Limited, Ford has created a vehicle as refined and feature packed as other high-tech SUVs, but which is vastly more practical and imposing. Not only will the working man pine for this 2020 Ford Ranger Limited, but the bourgeois bosses may now be keen to get a piece of the pick-up truck action too. People just seem to be fascinated with this thing—never have we driven any other press vehicle that has gotten us so many stares and compliments like “cool truck” and “nice car” from random passers-by.