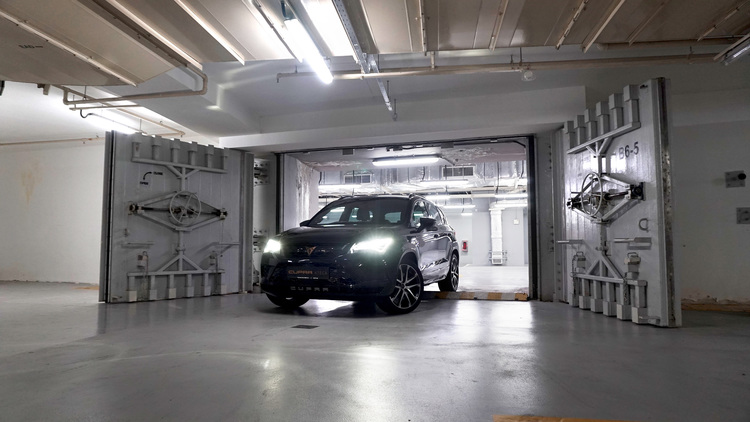 The CUPRA Ateca is the classic definition of a sleeper, and its Jekyll and Hyde personality means that you could fool your spouse into thinking that you bought the cheaper, vanilla SEAT Ateca 1.4, as long as you stay off CUPRA mode!

According to Wikipedia, a sleeper car is a "car that has high performance and an unassuming exterior". And that's exactly what the CUPRA Ateca is. You'd probably need to do a double-take before you realise that what you're looking at isn't the typical 1.4 litre SEAT Ateca, but a mean performance SUV that's capable of the century sprint in a blistering 5.2 seconds.

CUPRA used to be the Seat's performance sub-brand, but the Spanish marque has now made it a separate brand, with unique CUPRA models slated to be released in the future. So what exactly is the CUPRA Ateca, and how is it different from a typical SEAT Ateca? 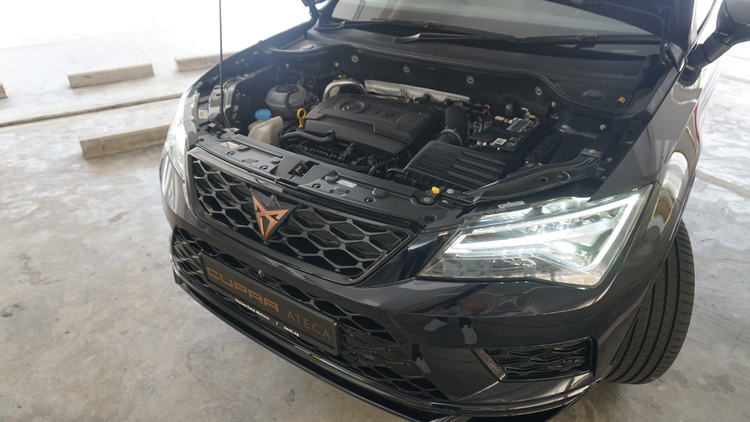 As Seat is owned by the Volkswagen-Audi Group (VAG), the CUPRA is basically a VAG parts-bin special. This isn't a bad thing, however. Underneath the bonnet lies the venerable 2.0 litre turbocharged EA888 engine found in the Porsche Macan, and a 7-speed wet DSG that is capable of both lightning fast shifts and smooth low-speed performance. Basically, what you get with the Cupra Ateca is a Golf R hot hatch, only in a more practical SUV form.

Cosmetically, there isn't much different from the normal Ateca, apart from a different badge (which many say looks like the logo of gaming company Razer), a few "CUPRA" letterings, meaner 19" wheels, and a quad exhaust system. 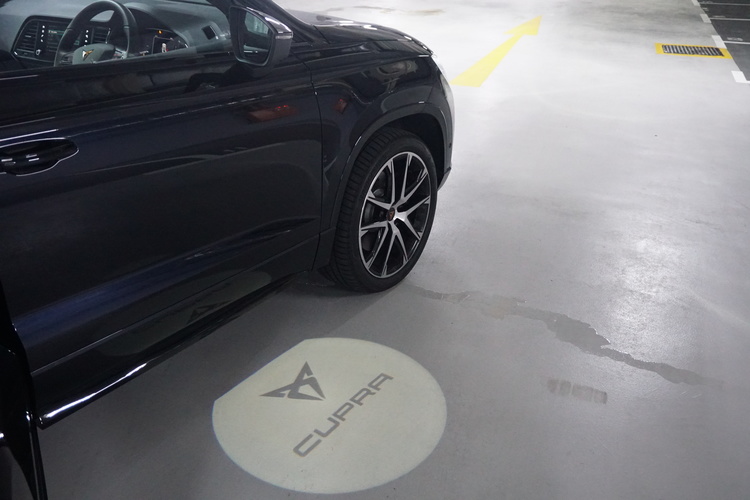 When you approach the CUPRA and unlock it, you're greeted by a puddle light that projects the CUPRA logo onto the ground. You then step into the car to face a flat-bottomed steering wheel with carbon-effect trim. The start button pulsates a glowing red, inviting you to awaken the 296hp beast underneath the bonnet that's capable of 400nm of torque. Once you do press the start button, a low burble can be heard from the sports exhaust as the engine comes to life--not too loud or in-your-face, but just enough to remind you that this isn't any normal SUV. 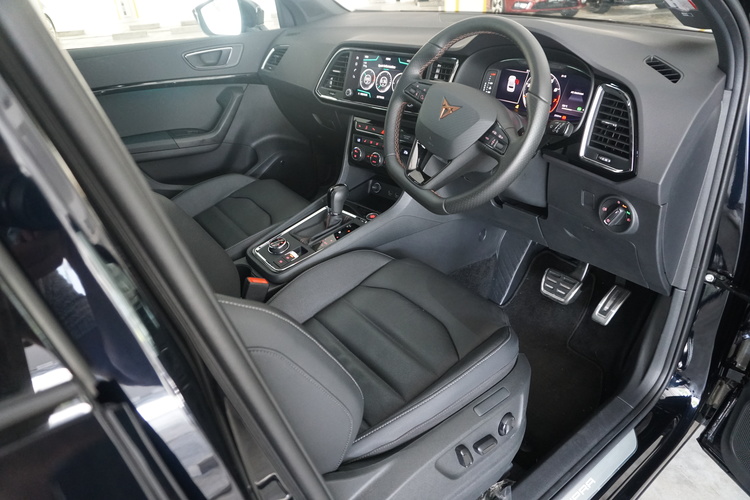 The front seats are excellently designed, with great bolstering for your thighs and hips, which is definitely necessary especially when one is enjoying some spirited driving in CUPRA mode. Front passengers also enjoy customisable ambient lighting and wireless charging. 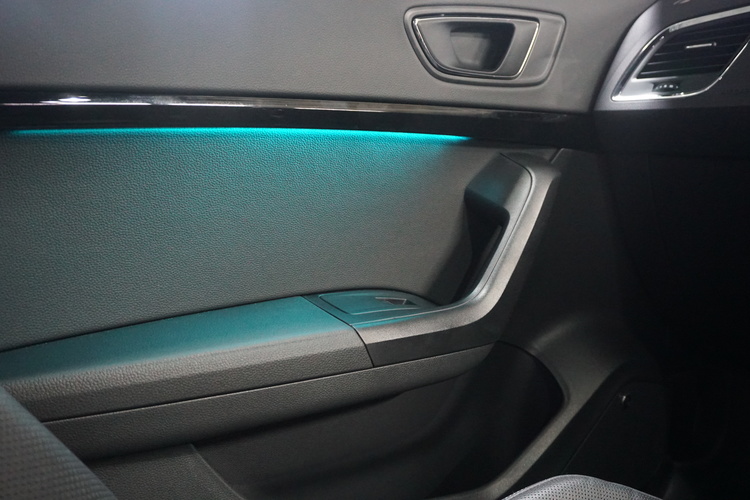 In the back, passengers enjoy ample space, and the Ateca's clever design means that passengers can slot their feet underneath the front seats, which further maximises rear legroom. The CUPRA's four-wheel-drive system does mean that the centre hump is quite wide and high, however, the car is wide enough such that the middle-seat passenger is still able to be seated comfortably. A pair of charging ports and aircon vents are also present in the rear, along with a fold-down armrest with cupholders. 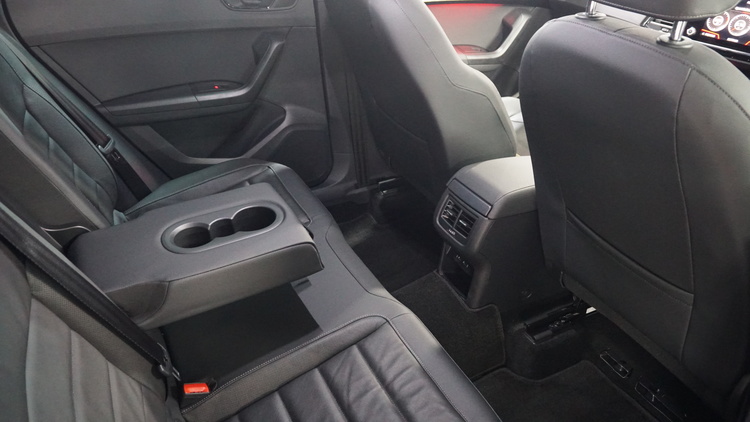 We do have some complaints about the interior, though. Up front, only the driver's seat enjoys electric controls, but even so, it lacks memory seat function. Furthermore, the ambient lighting is limited only to the front door cards; not only do the rear doors lack this feature, they're also trimmed in hard scratchy plastics as well. For a car that is being priced at S$182,999 (at the time of writing), we'd expect at least full soft-touch plastics across the interior. 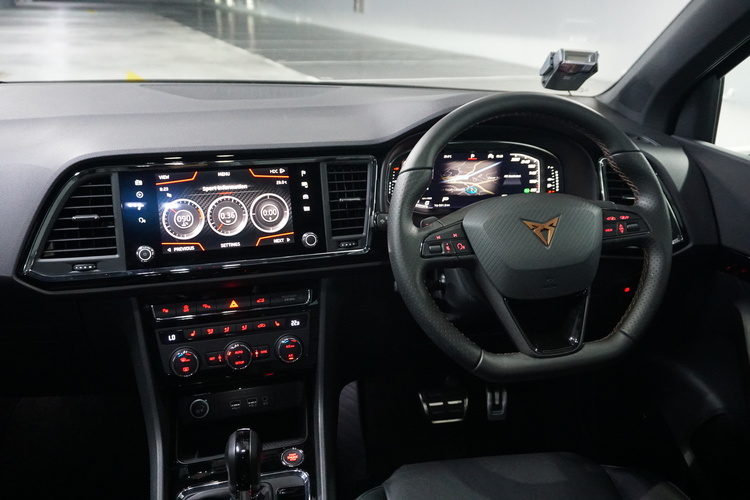 The CUPRA Ateca does redeem itself, however, with its plethora of features.

Amongst its impressive list of features include adaptive cruise control, rear cross traffic alert, blind spot warning, 360 degree camera, and even an auto-parking system that is capable of reverse, parallel, and head-in parking! 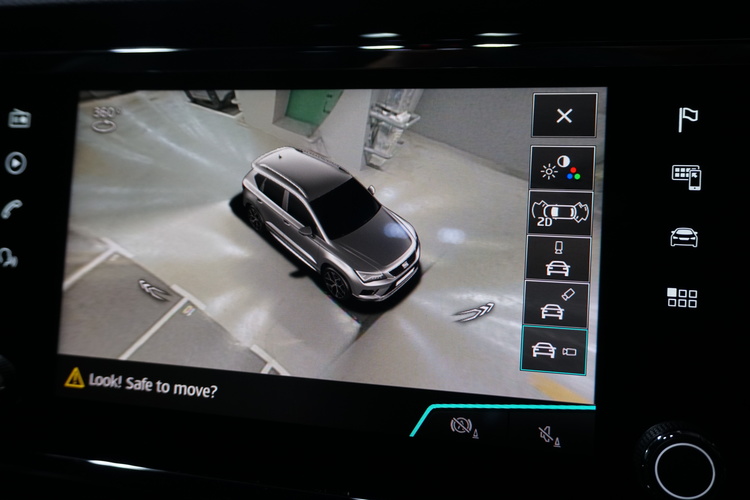 Furthermore, it has a feature-packed 8" infotainment display that is Apple CarPlay and Android Auto compatible, and a fully digital driver's cockpit that can display navigation information, much like in Audi's virtual cockpit system. 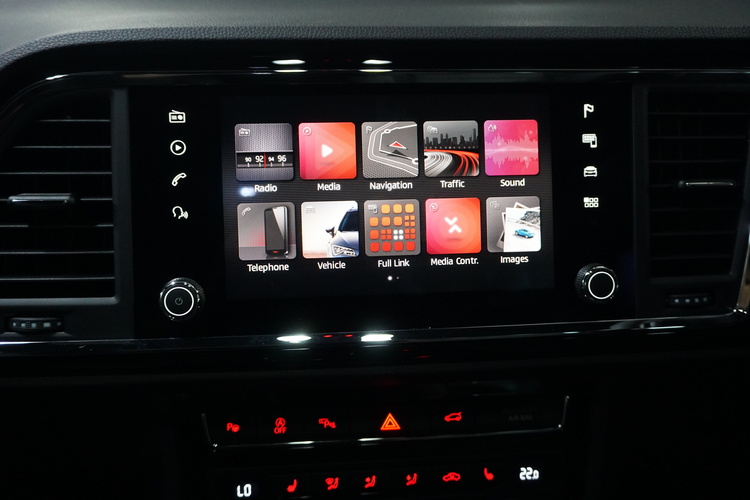 The CUPRA has 6 different driving modes that are selectable from the rotary knob on the centre console, or through the infotainment system. Individual mode allows you to customise your drive, while Snow and Off-Road modes are basically redundant for Singaporean roads. What we shall focus on then, are Comfort mode, Sports mode (an intermediate mode between Comfort and CUPRA), and CUPRA mode. 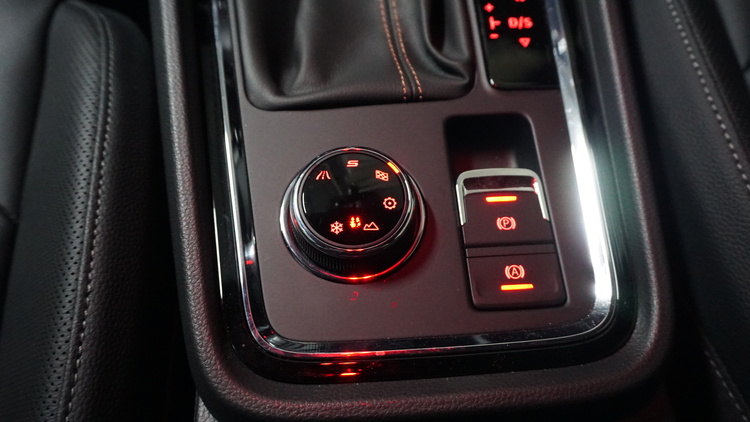 Driving in Comfort, the CUPRA Ateca is just like any other family SUV--comfortable, with a supple suspension that glides over bumps. Shifts are smooth and imperceptible, and the car is simply an extremely civil machine capable of the morning school run or the pop to the shops. The only complaint--and this is a minor one--is that insulation from road noise could be slightly better. Equipped with the Dynamic Chassis Control (DCC) system, the CUPRA's electronic dampers use information from sensors in each wheel and other parts of the drivetrain to continually react to bumps in the roads up to 1,000 times per second. What this means in practice is a smooth supple ride that isn't too floaty as well. 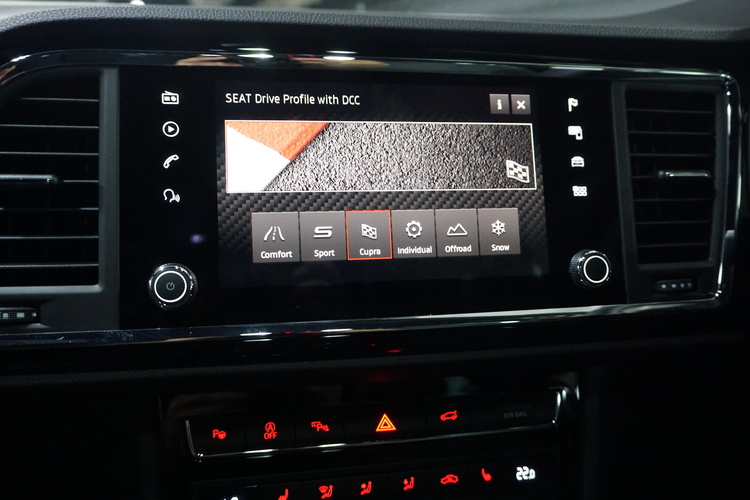 Put the car into the CUPRA drive mode, though, and this civil and kind Dr Jekyll of an SUV turns into a sinister Mr Hyde. You immediately hear the exhaust burbling, and the DCC goes into sports mode. With just the flick of the rotary drive mode selector switch, the car's steering and suspension firms up. Suddenly, as you cruise down the road, the car holds on to the gears up to 3,000rpm. Let off the throttle right before the 3,000rpm shifting point and you'll be rewarded with a growl from the exhaust, and then a series of pops and bangs.

Accelerate off from the stop lights and the car unleashes its power so quickly that you're the next set of lights before you even know it. Honestly, the scale of acceleration of this monster is quite unlike any other SUV you might be familiar from SEAT. 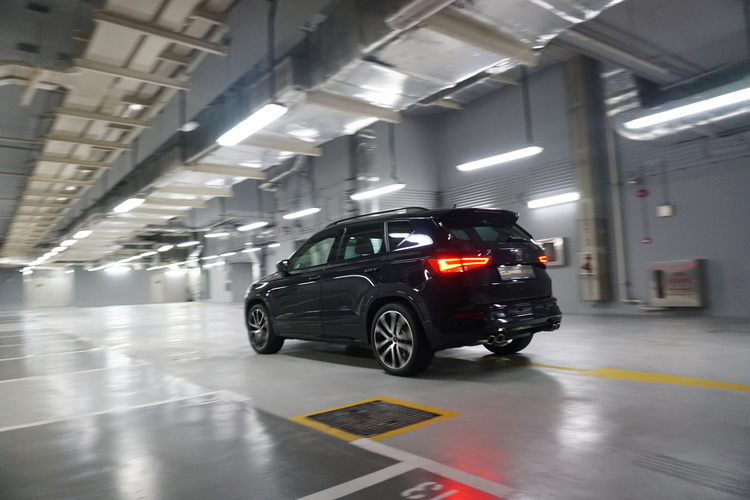 Instead of a family SUV with a supple ride, the CUPRA takes on the characteristics of a hot hatch, with barely any body roll through the bends. Suddenly, you find yourself in a mean machine that's capable of attacking corners with verve. The CUPRA Ateca turns in a neutral manner, and only slips into a progressive understeer right at the limit, when the tyres begin to squeal. Usually, the Electronic Stability Control will kick in before that happens, but it can simply be corrected with a slight flick of the steering wheel.

Steering feel is adequate enough to tell you what's happening on the road's surface, although it feels slightly distant--though that is a trait typical of most electric power steering systems nowadays. The progressive steering system tightens up and becomes quite hefty in CUPRA mode, and steering manoeuvres usually require just up to half a lock, which is perfect for spirited driving. 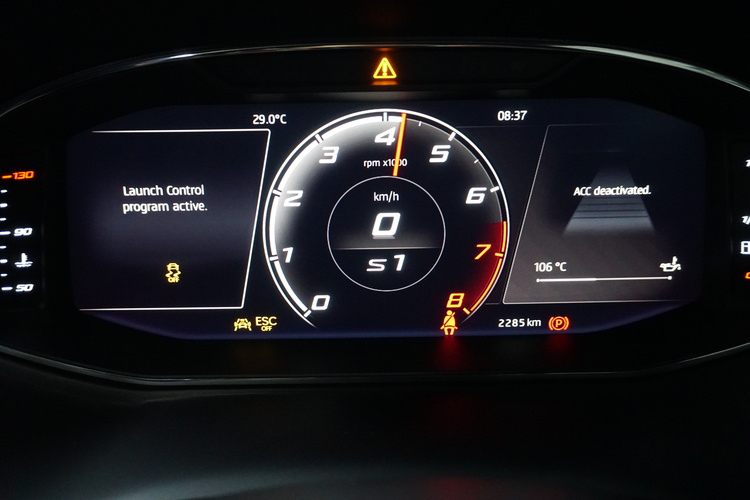 The CUPRA's 4Drive four-wheel-drive system gives you maximum grip and allows the car to accelerate off the line in a neck-aching 5.2 seconds with the launch control programme, which is 0.5 seconds faster than its front-wheel-drive hot hatch Leon CUPRA sibling. We did find that there was a noticeable turbo lag at times, though, especially when we prodded the throttle when the car was cruising.

The difference in character between the car in Comfort and CUPRA modes is as though one were driving two different cars. Not a single person batted an eyelid when we were driving this family friendly SUV in Comfort mode, but with the exhaust burbling and the crazy acceleration in CUPRA mode, all eyes were on the Ateca at the stop lights (especially after we smoked another hot hatch off the line from the previous traffic junction). 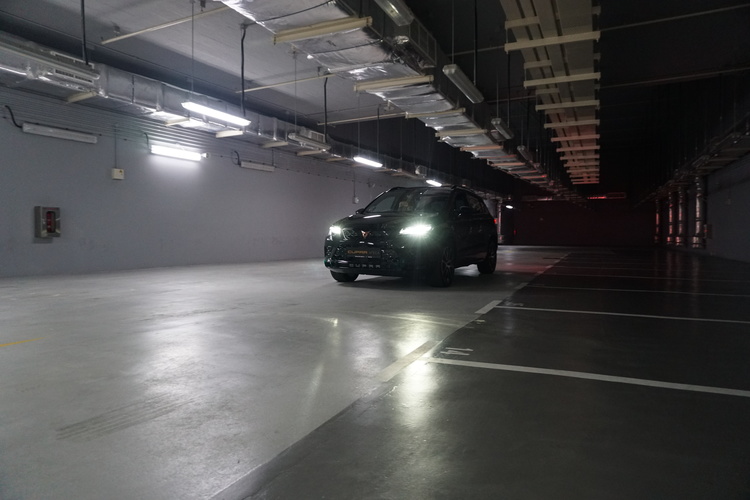 It is genuinely staggering that this 1.6 tonne behemoth of an SUV can accelerate better than a Honda Civic Type R, and handle just as well. But not only that, because it's an SUV, you sit higher off the road rather than low down to the ground, giving you and everyone else on the road the impression that you're simply invincible. Singaporean drivers are notorious for hogging lanes and not giving way, but with the CUPRA Ateca, you'll face no such problem. 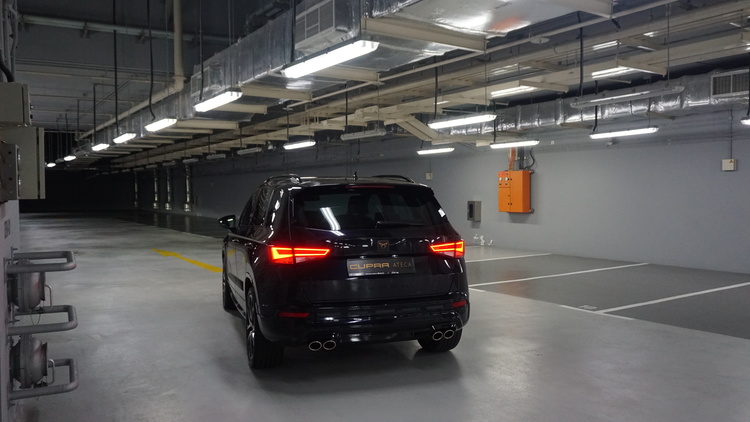 From a simple dollars-and-sense calculus, buying the CUPRA Ateca is a no-brainer. Looking purely from the performance point-of-view, there is no other car you can buy that accelerates just as fast at the S$182,000 price point. All other cars that perform on the CUPRA's level can only be found above the S$200,000 price bracket. And it's not like you're buying an impractical performance car as well. The CUPRA can be an everyday family SUV, with all the bells and whistles, including a boot with an electric tailgate that can swallow up to 485l of cargo. 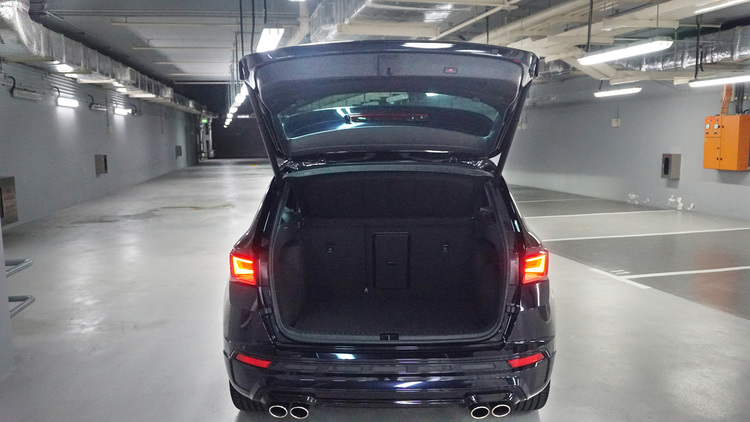 With the CUPRA Ateca, you can feel like you're driving a hot hatch, yet enjoy a far more practical and imposing SUV body style. Unlike other flashy performance cars, you also have the option to be a nondescript civil Jekyll, or unleash Mr Hyde in CUPRA mode.

The big question is whether you can look past the clear cost-cutting considering its asking price: the interior is a sea of dull black, and the rear passenger doors use subpar hard plastics. Furthermore, we thought that a panoramic sunroof could have been a standard option, rather than a chargeable add-on.

Regardless, the CUPRA Ateca is an absolute bargain for what it is: a practical family SUV that also happens to be able to dominate most performance cars on the straights and in the bends.