mReview: Opel Combo-e - A Van That Almost Feels Like A Car 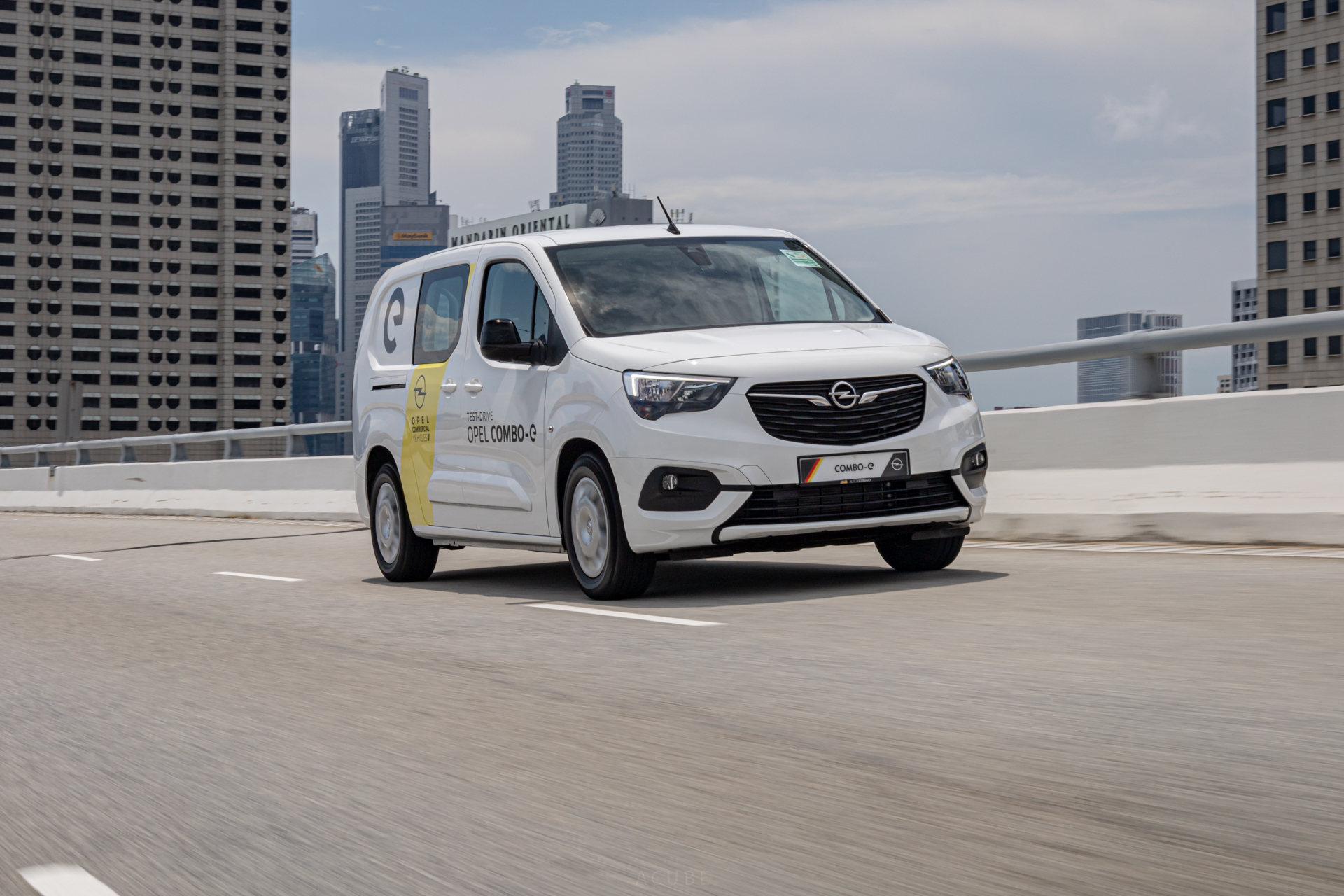 Is it coincidental that this is the fourth commercial vehicle in a row that I’ve driven? Beats me. But if they all felt this composed, I wouldn’t mind driving more of them.

Out of all the commercial vehicles we’ve reviewed this year, some were good, while others were… Well, let’s just say an urgent appointment with the chiropractor was made after I was done with them. It could be why I was looking forward to the Opel Combo-e, since it would be the first European commercial vehicle I would drive this year.

The Combo has been the go-to small van in the Opel range since its inception in 1986. Not much bigger or longer than most bread-and-butter cars, perhaps the most outstanding feature was the Opel logo on the front grille, as most of our local populace would assume that a van would be something from Japanese manufacturers, not the Europeans. 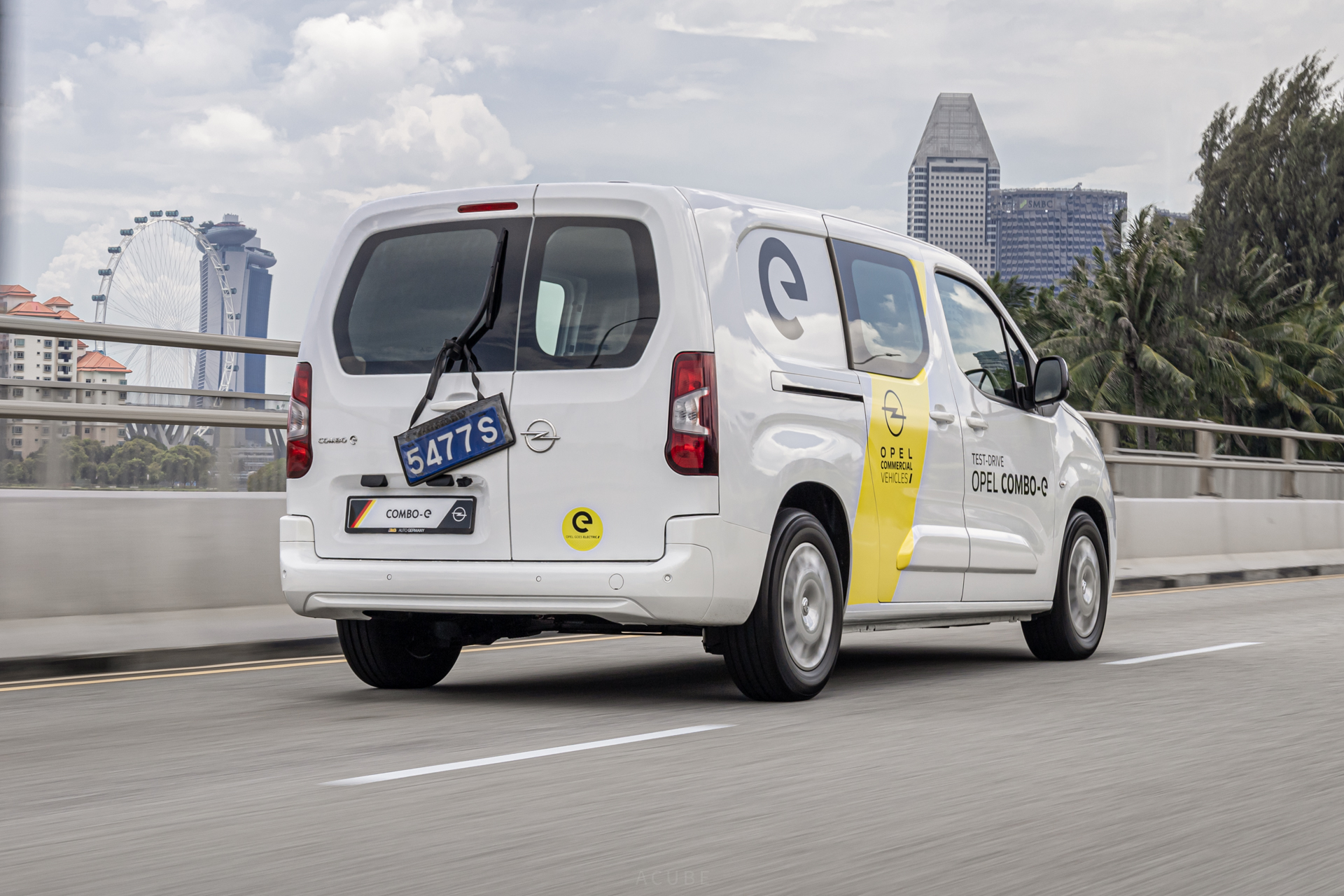 With its car-like front end and boxy body shape, there was no mistaking what it was, especially when compared to the Japanese, who more or less had similar body shapes and lines across the various brands.

And if you’re thinking, “wasn’t it previously available as a diesel?”, you would be right. Previous iterations were powered by internal combustion, with the Combo-e only being launched locally in August of this year, being one of two electric van offerings from Opel. 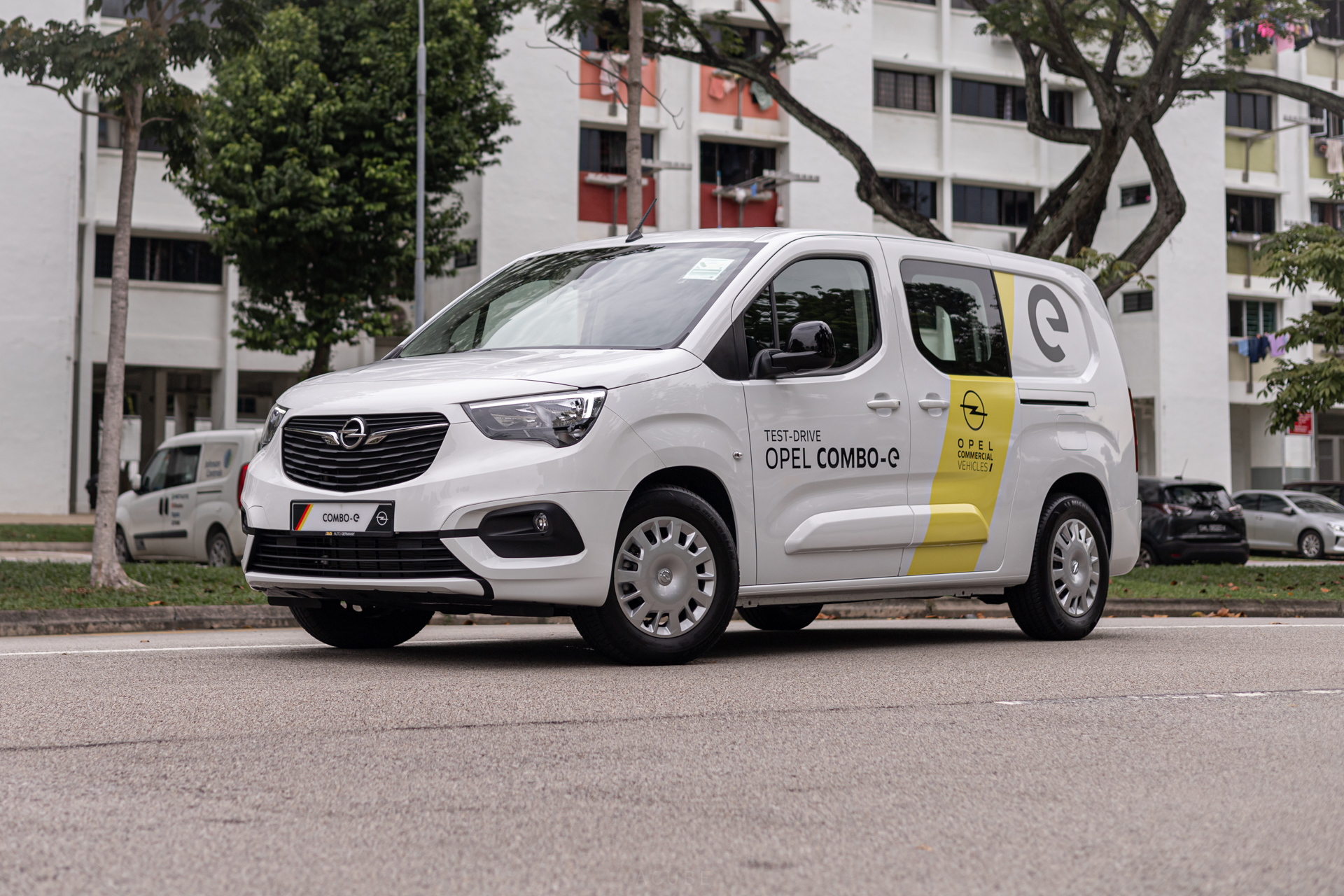 Let’s be honest here, if this were to pull up beside you, minus the eye-catching livery that was applied here, you wouldn’t take a second look. While Opel’s new design language is edgier and more angular, the Combo-e doesn’t seem to have gotten the full extent of the memo.

With its softer lines and less defined creases, it’s not going to stand out in a crowd. Perhaps the most angular part of its design would be the headlights cluster, with the daytime running light’s LED strip providing some semblance to Opel’s new design language. 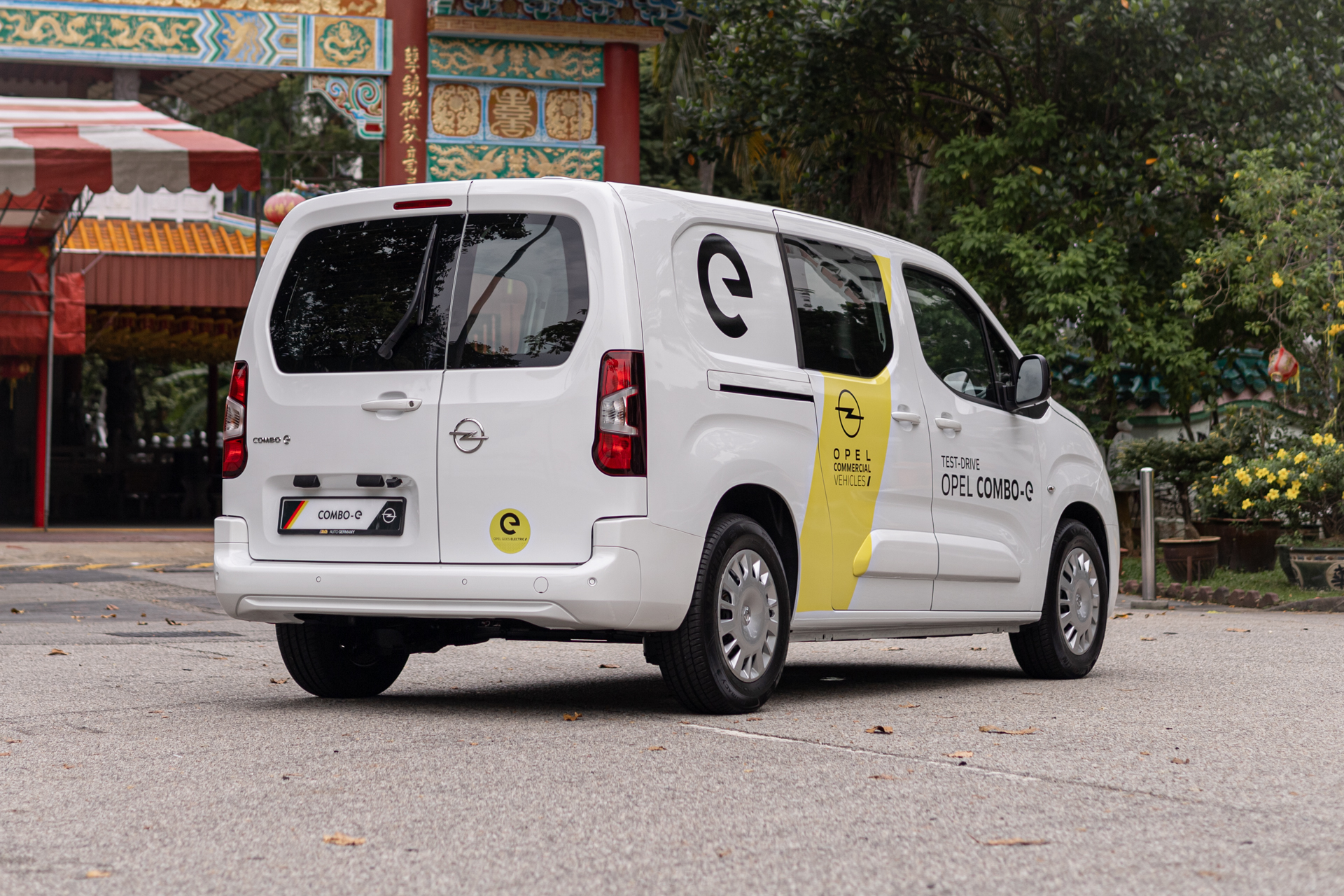 While there may be some out there who might question this move, what is the point of a commercial vehicle? It is to assist a business in revenue-generating activities, such as transporting various goods, cargo and documents, and rarely is it a platform for a manufacturer to showcase their latest and greatest.

That being said, whatever impression its subdued looks might give you would be irrelevant once you start driving it. Why? Because you wouldn’t expect a van to feel this car-like. Granted, this isn’t a vehicle you would drive exuberantly, for that completely defeats its intended purpose, but if you were to be blindfolded as a passenger, you would very well assume you’re in a car. 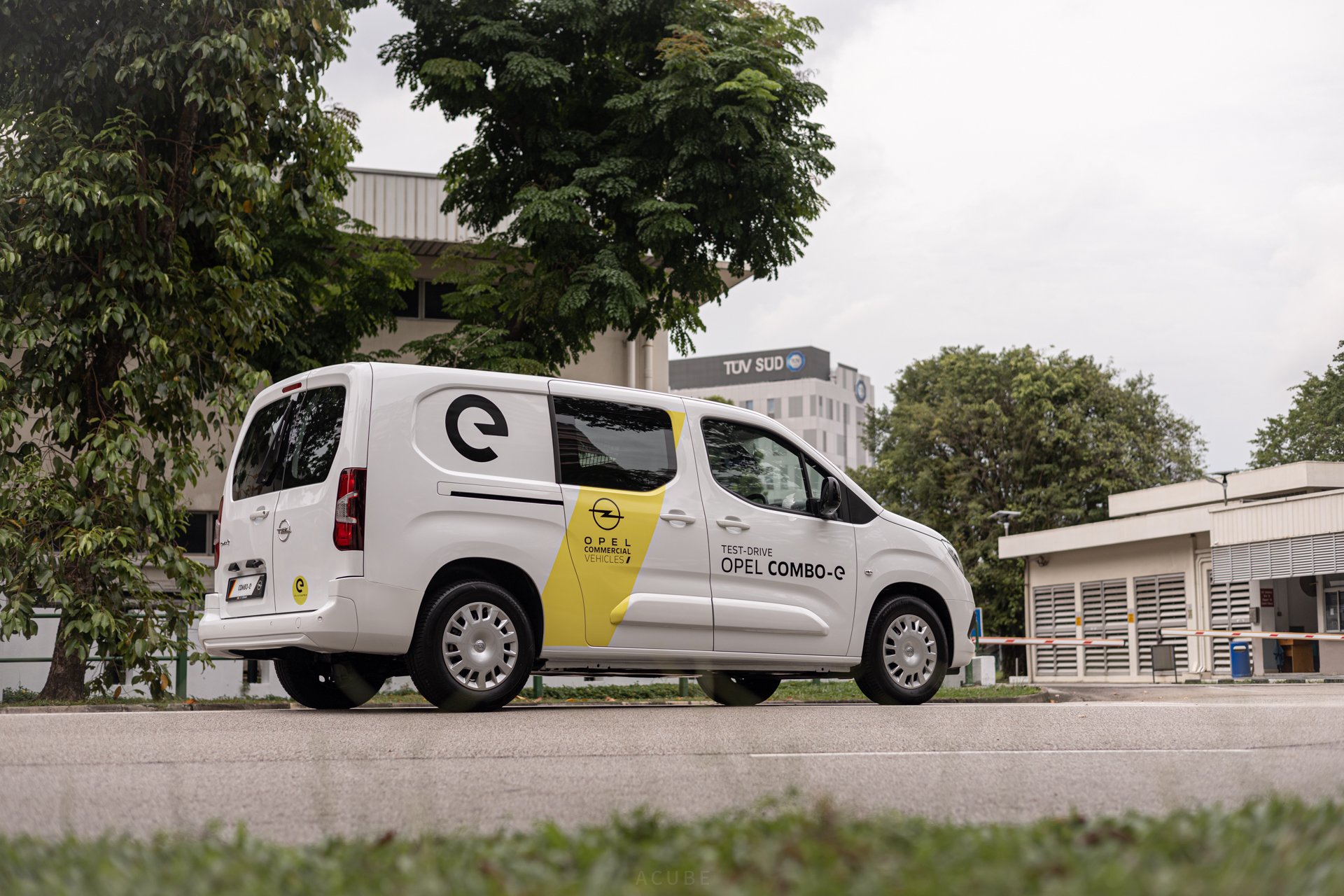 One of the first things I noticed was how it was fitted with Michelin Primacy 4 tyres, and it showed with the quiet ride. I never had to raise my voice for a conversation nor turn up the music to drown out any ambient noises. Coupled with ride quality that was better than some cars I’ve ridden in, I was genuinely surprised how reminiscent of a car the Combo-e was.

Steering feel was vague at best, being rather light and overboosted. But, the small turning circle of 5.9 metres was greatly welcome, and together with the light steering, made maneuvering at low speeds a painless affair. 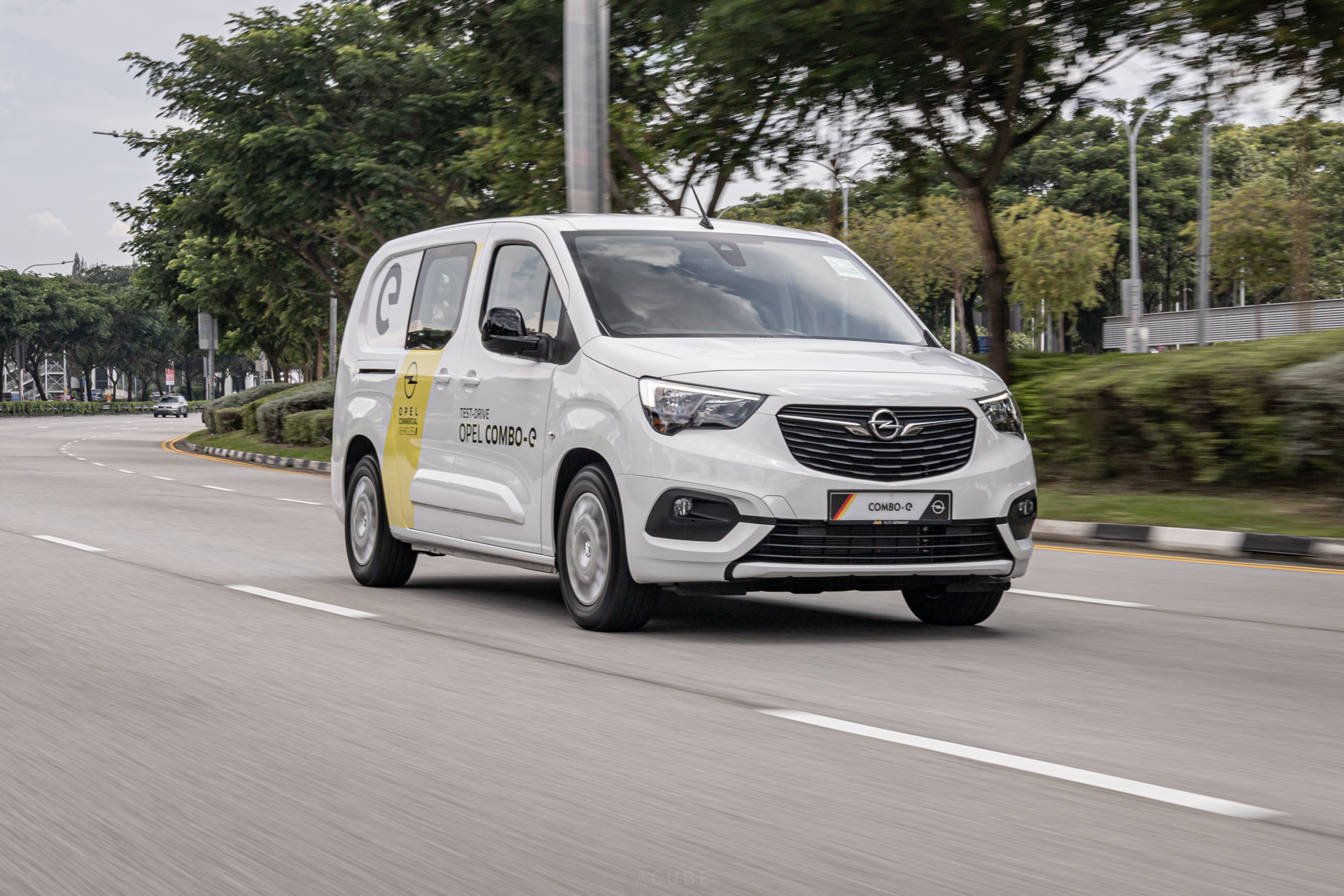 A single electric motor draws power from a 50 kWh battery, producing 134 bhp and 260 Nm of torque that drives the front wheels via a single-speed transmission, with weight at 1,632 kg. The century sprint is a claimed 9.2 seconds, and given how responsive the throttle felt, we have little reason to doubt those numbers.

Top speed is quoted at 150 km/h, and while we didn’t come close to those numbers, it is theoretically more than capable of overtaking those pesky lane hoggers on the expressway. Just don’t ask us how we know this. 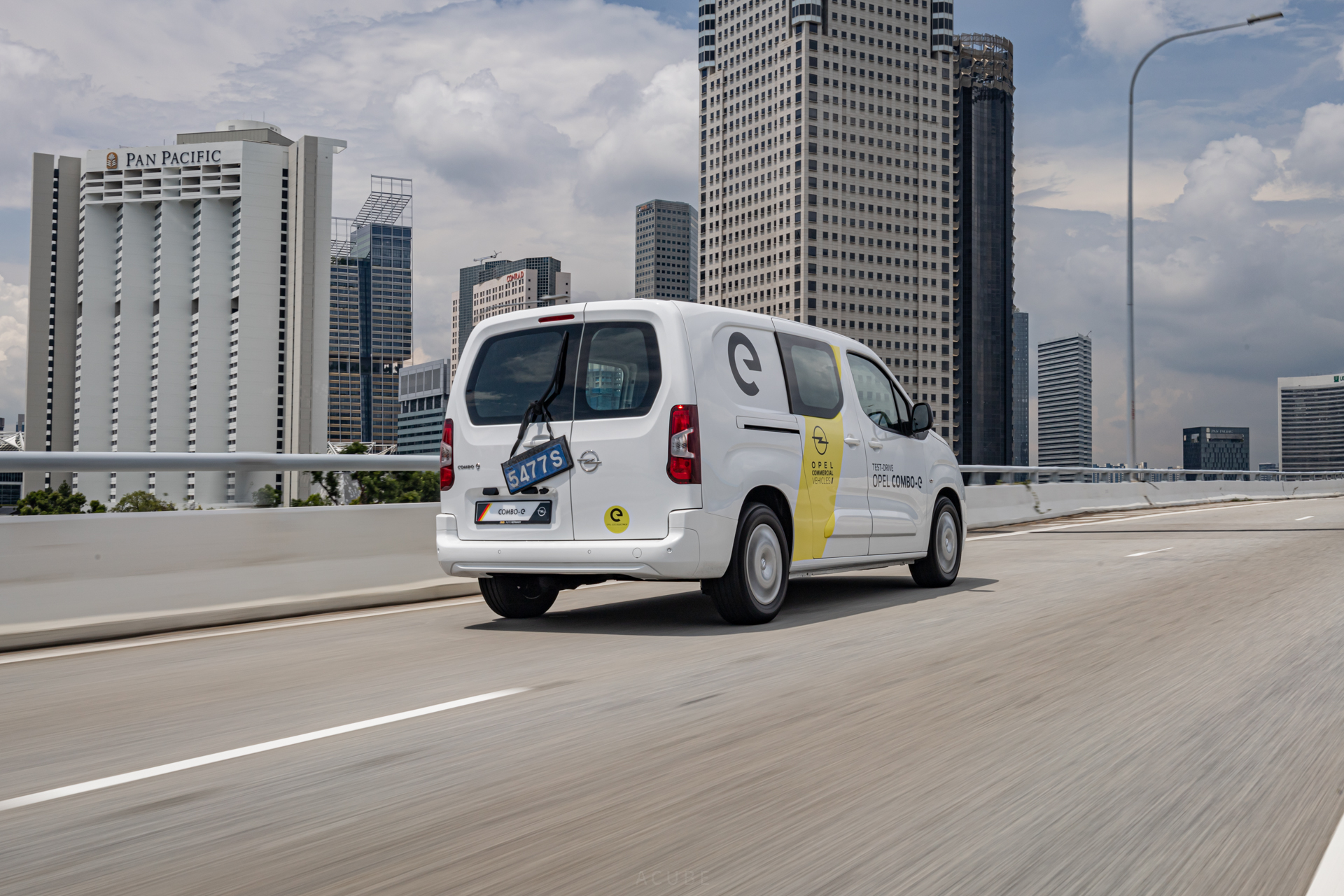 The maximum DC charging rate is 50 kW, and based on our experience, recharging a near empty battery takes an hour. AC charging is capped at 11 kW, so expect to take at least six hours to fully recharge an empty battery.

An Interior with So Much Storage Space 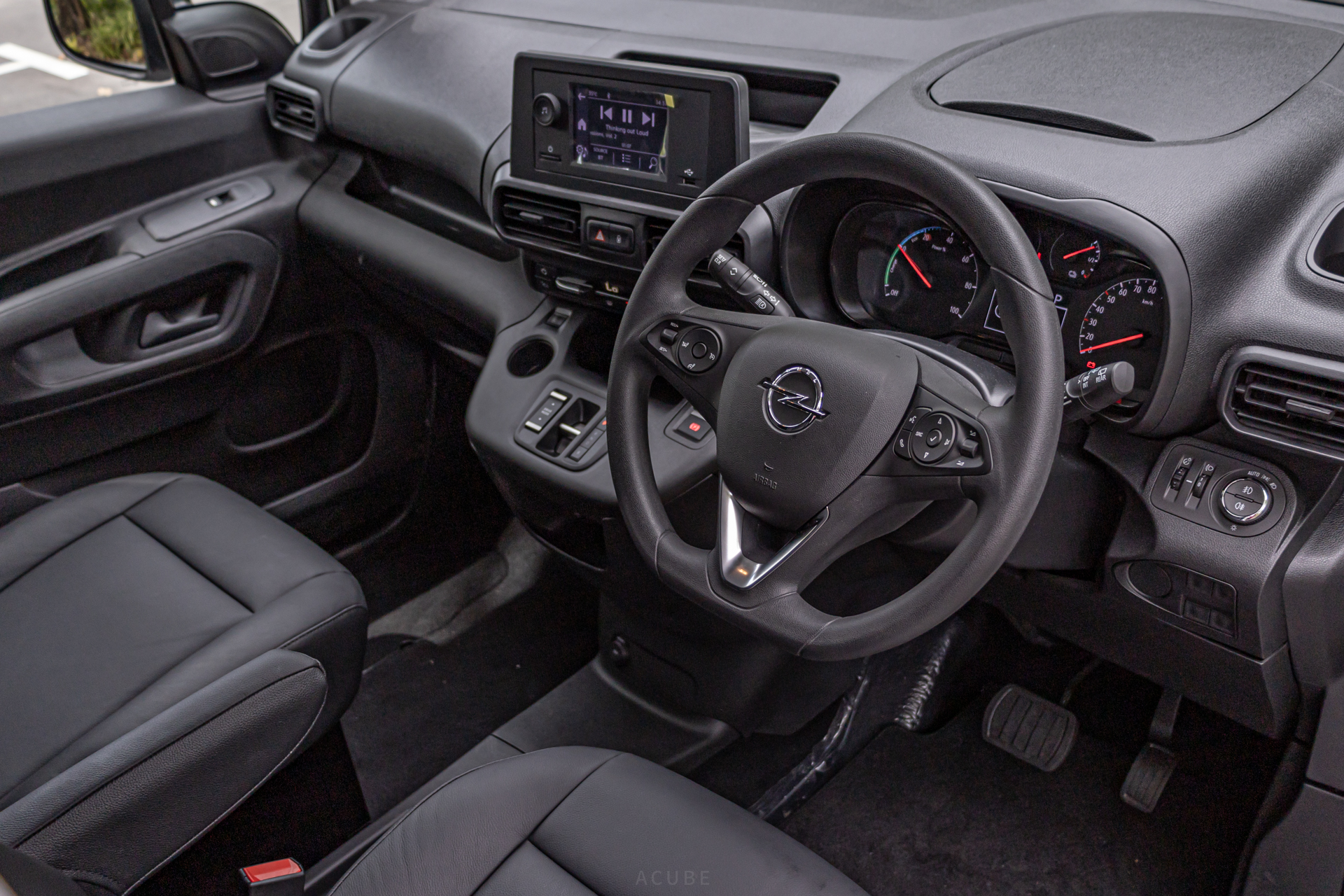 With 3.9 m³ of load capacity, it’s not the biggest. But with its boxy shape and height of 1.88 metres, cargo space is actually much more than you might think. I even ferried six colleagues in the back on a short drive. However, we wouldn’t recommend doing this unless necessary as there isn’t any ventilation and it gets really stuffy back there.

Interior materials, being a mix of hard plastics and black vinyl, are basic but sufficient. Fortunately, there are creature comforts like cruise control, Bluetooth connectivity (with decent speakers to boot), and automatic headlights and windows. The physical controls for the HVAC system, instead of touch-sensitive panels, were also very welcome. 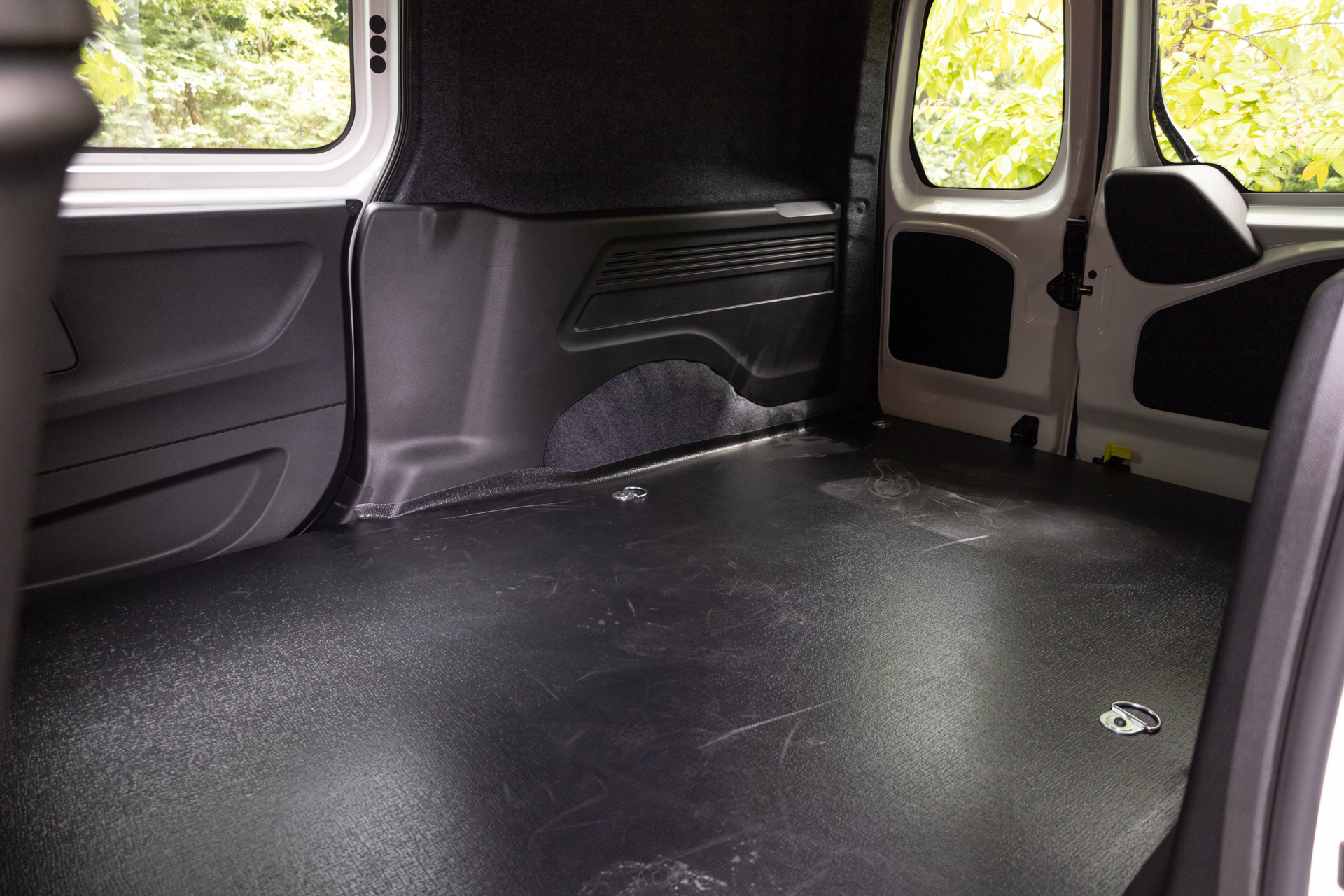 But the best part of the interior is just how much storage space there is. Besides the regular glovebox and door cubbies, there are additional compartments in front of both the driver and passenger, ample space in between the seats for your bag, and even a shelf-like space above for smaller items like documents. Truly, kudos to Opel for thinking of something like this.

Priced at $145,000, the Combo-e is not the most affordable commercial vehicle, especially with the cheaper options offered by Chinese manufacturers. Its range is an issue too, given how much it can be affected by load, ambient temperature and driving style, but this is a common factor among all electric commercial vehicles. 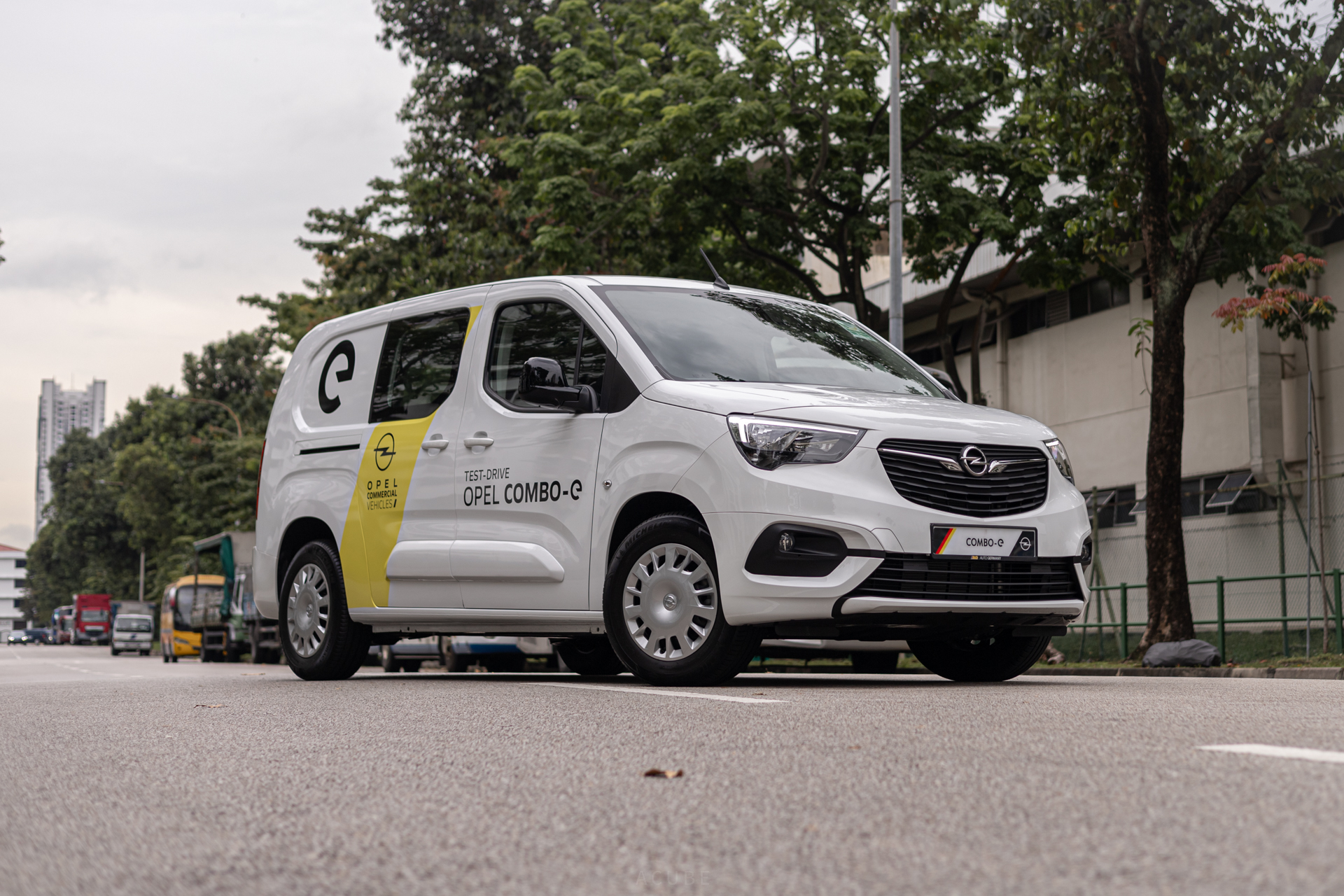 But to think in that manner is counterintuitive to what the Combo-e stands for. Among all the electric commercial vehicles that we’ve tested in 2022, this is by far the most composed and comfortable of them all. Instead of feeling physically tired or beat up after a long drive, I feel no different than if I were to have driven a car instead.

Yes, electric commercial vehicles still have shortcomings. But when it comes to operating costs, they are cheaper and require less maintenance and downtime. There’s no doubt advancements in technology will improve range, and all that’s required now is whether you and your business are willing to take this step into electric mobility.