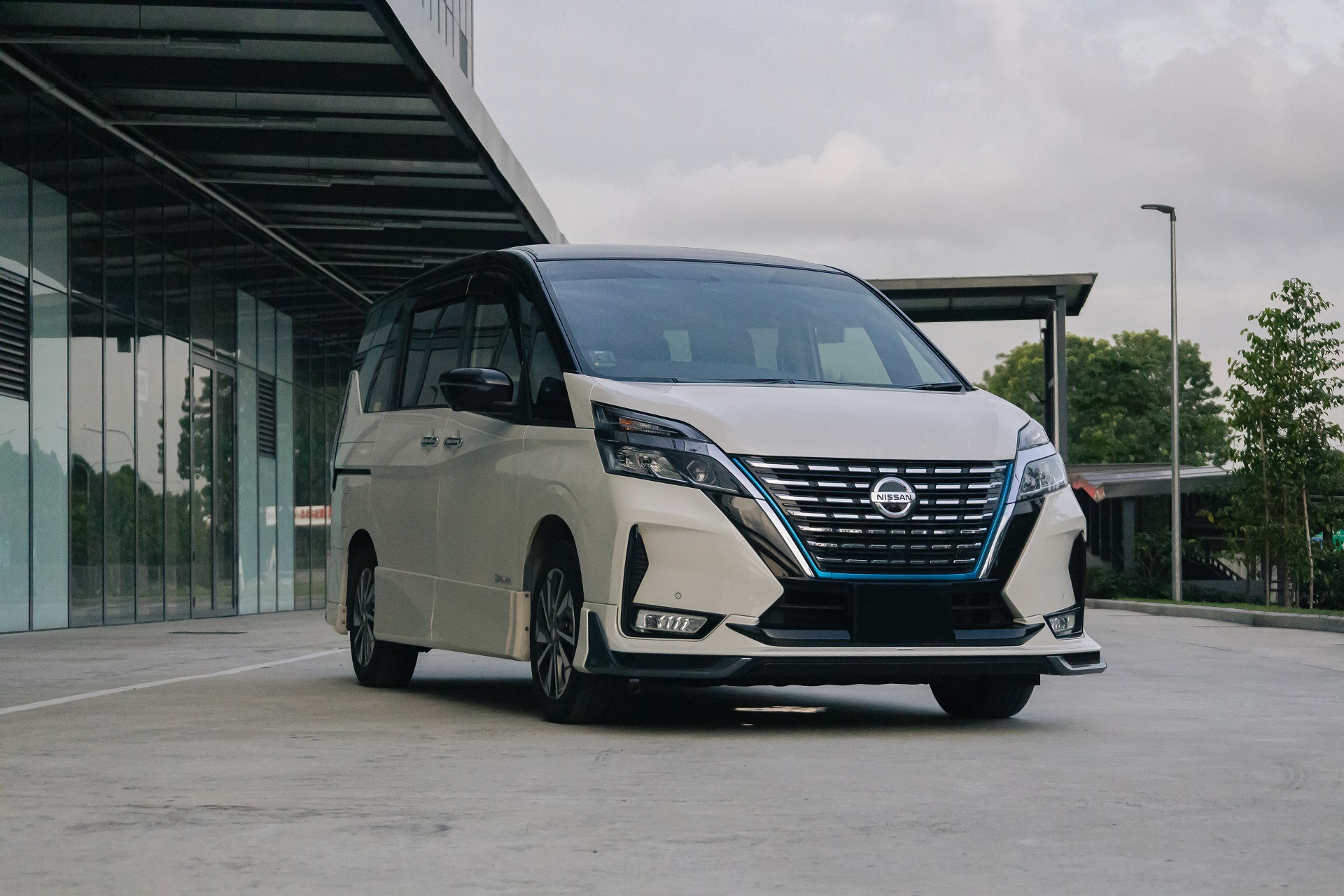 Built as Nissan’s junior MPV, the Serena came with its own set of quirks. With a name derived from the Latin meaning of tranquil and pleasant, does it live up to its name?

Built to comply with specific regulations set by the Japanese Vehicle Classifications, the Nissan Serena is restricted in length, width, height and engine capacity, as spelt out by the Japanese Government’s Road Vehicle Act of 1951.

First launched in 1991 primarily for the Japanese market, it proved to be a popular import in right-hand drive nations like Australia and the UK. Subsequent generations followed in the years to come, culminating in the current fifth generation, which was launched in 2016 and facelifted in 2019.

Motorist would like to extend our thanks to Sphere Automobile for loaning us the Nissan Serena for this article. 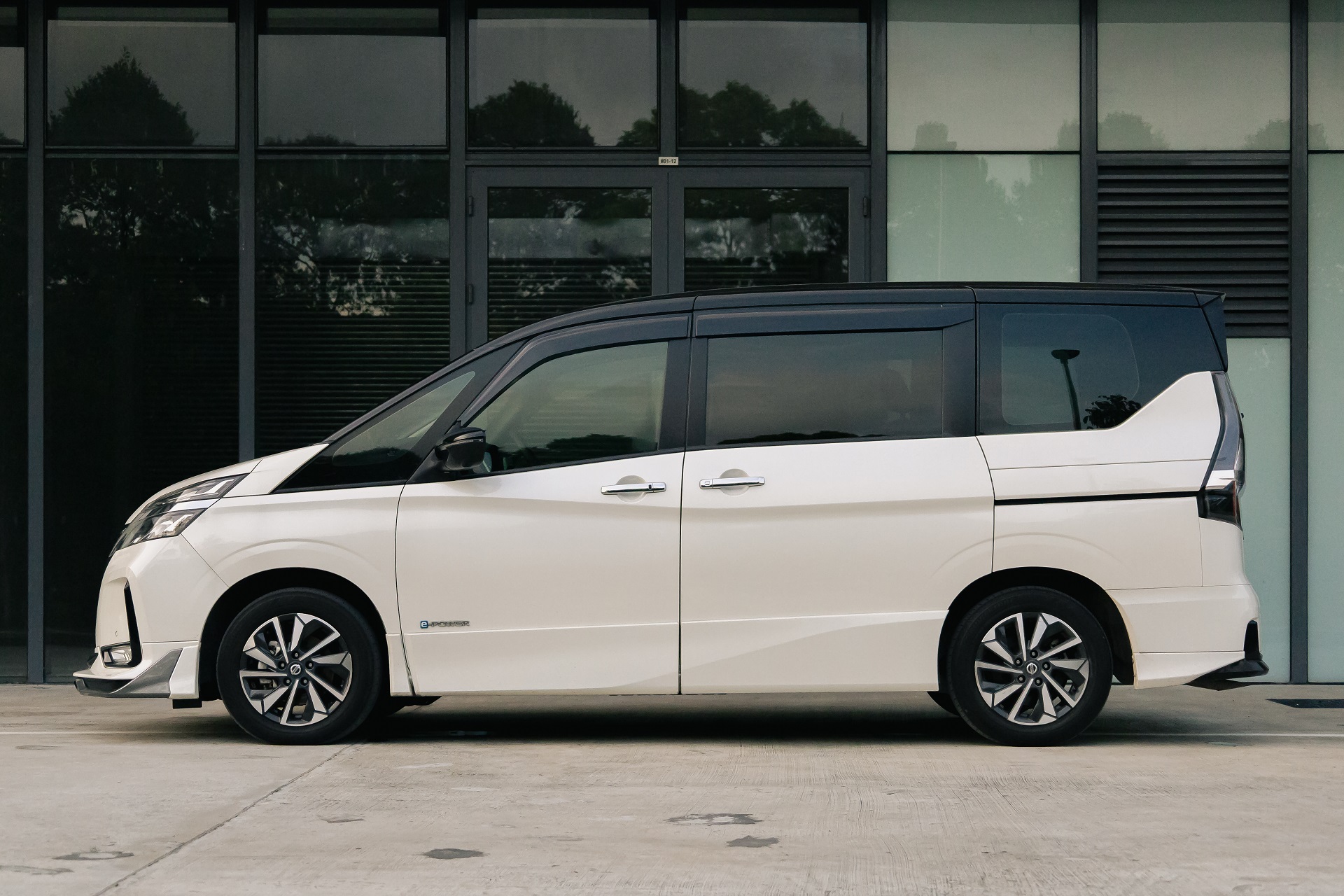 This is a fifth generation Nissan Serena (C27), or to give its full designation, the Nissan Serena e-POWER Hybrid 1.2A Highway Star Premium (it is quite a mouthful). With this particular unit being built in 2020, it is a facelifted model. Thus, it benefits from a redesigned front grill, front bumper and rear bumper, as well as updated driving assistance systems.

In Singapore, the only variant sold was the Highway Star, with the distinctive front grille being the biggest identifying trait. It was available with a few trim levels, with this particular unit being equipped with the “Premium” trim line, which also happens to be the base trim level. From the factory, two engine options were available, a 2.0-litre "S-Hybrid" and a 1.2-litre e-POWER hybrid, where the engine acted as a generator to charge the batteries. 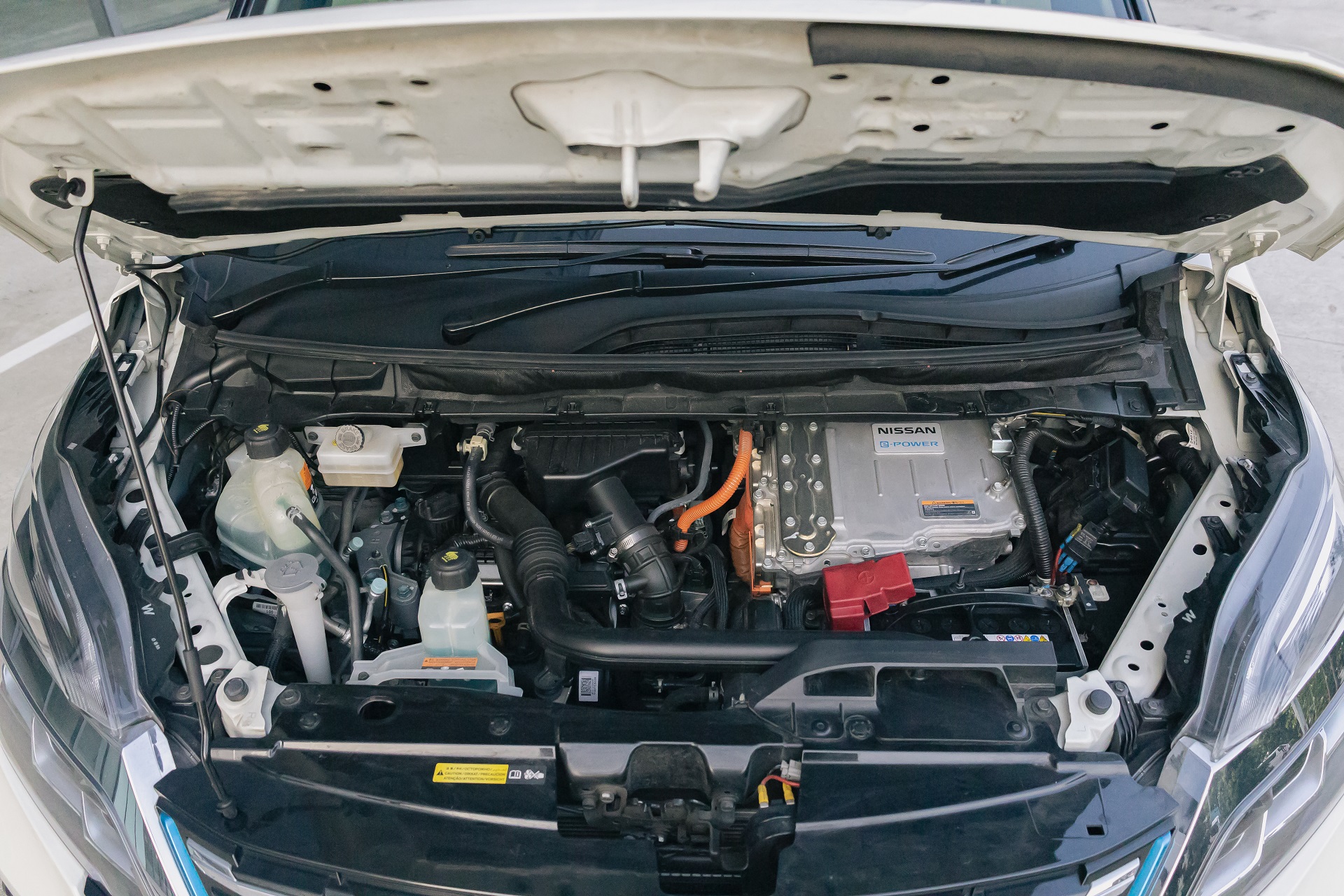 Locally, the only engine option available was the three-cylinder 1.2-litre e-POWER hybrid, which was also known as a series hybrid, with no plug-in charging capability. Combined power from the engine and electric motors were rated at 134 horsepower and 320Nm of torque, with drive being sent to the front wheels only via a single-speed reduction gear.

Acceleration from 0 - 100km/h takes a leisurely 12 seconds. Not entirely surprising, considering the Serena weighs 1,750 kilograms, which is a fair amount of mass to get up to speed with only 134 horsepower.

Based on the opinion from owners, the Serena has proven to be a rather reliable platform with minimal mechanical or electrical issues, which harks to the reliability of Japanese cars.

Still, some problems have been reported, with one of them being an issue with the air-conditioning system, which turned out to be a thermostat issue. Fortunately, this is an issue that should be covered under warranty, so head back to the Nissan authorised dealer should you face this issue. 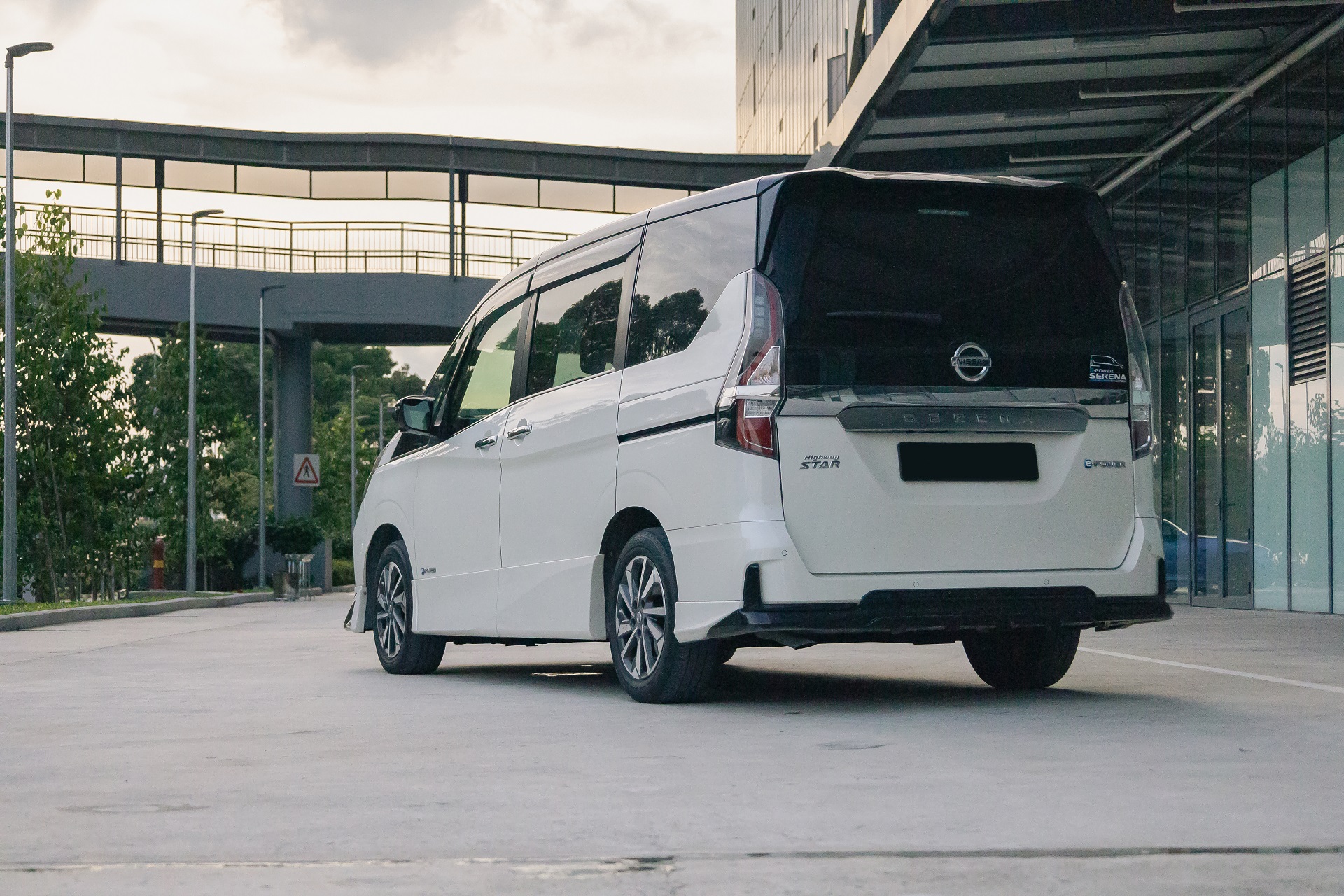 Several owners have noted an issue with the side cameras, which are housed in the wing mirrors. Being a larger car, the Serena is fitted with a 360-degree camera system to enhance all-round visibility when parking. With the side camera issues, this renders the camera system less effective as there are only visuals shown from the front and rear cameras.

While the problem is intermittent, the authorised dealer doesn’t seem to have a fix just yet, so it remains to be seen what exactly is the cause of the issue. Owners have reported that a quick fix is to knock the camera a few times, which brings the cameras back to working order. 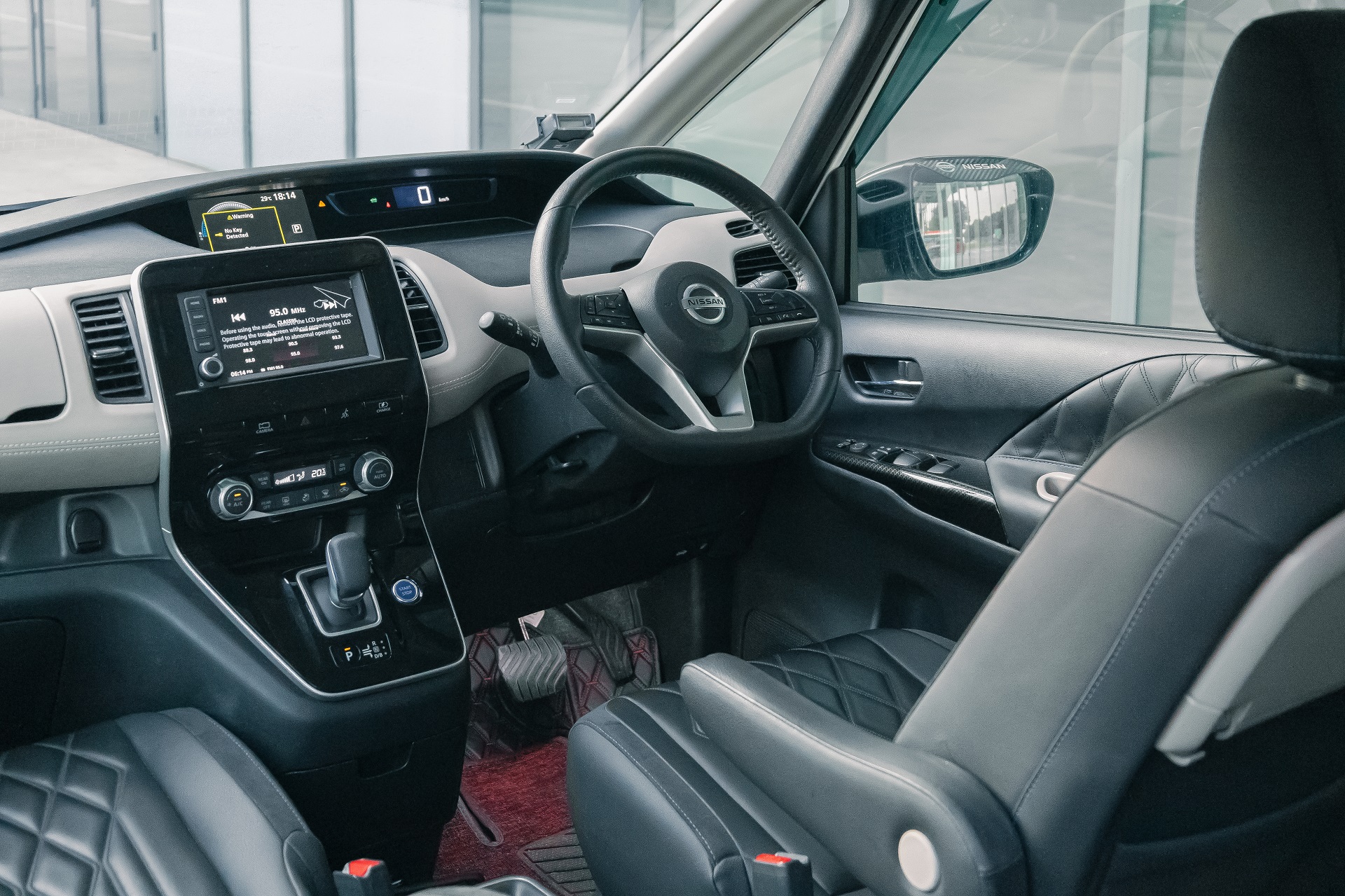 Several owners have also noted an error message appearing on their dashboard, warning them of an error with the e-POWER system, and that the car will not restart should it be switched off. Thankfully, this issue is easily rectified with a software update at the authorised dealer.

With a fuel capacity of 55 litres, some might think that is a small tank for this big a car. However, fuel efficiency numbers are about 15km/litre, which comes out to 825 kilometres of range on a full tank. For a large car with a 1.2-litre engine and hybrid system, it is rather impressive. Some owners have even claimed to exceed 900 kilometres on one tank, so if your foot is light enough, that could be possible.

The Serena will comfortably seat seven people, with individual chairs in the first and second row, and a bench seat in the third row for three passengers. Still, it is recommended that only two persons sit in the last row so as to maximise comfort. 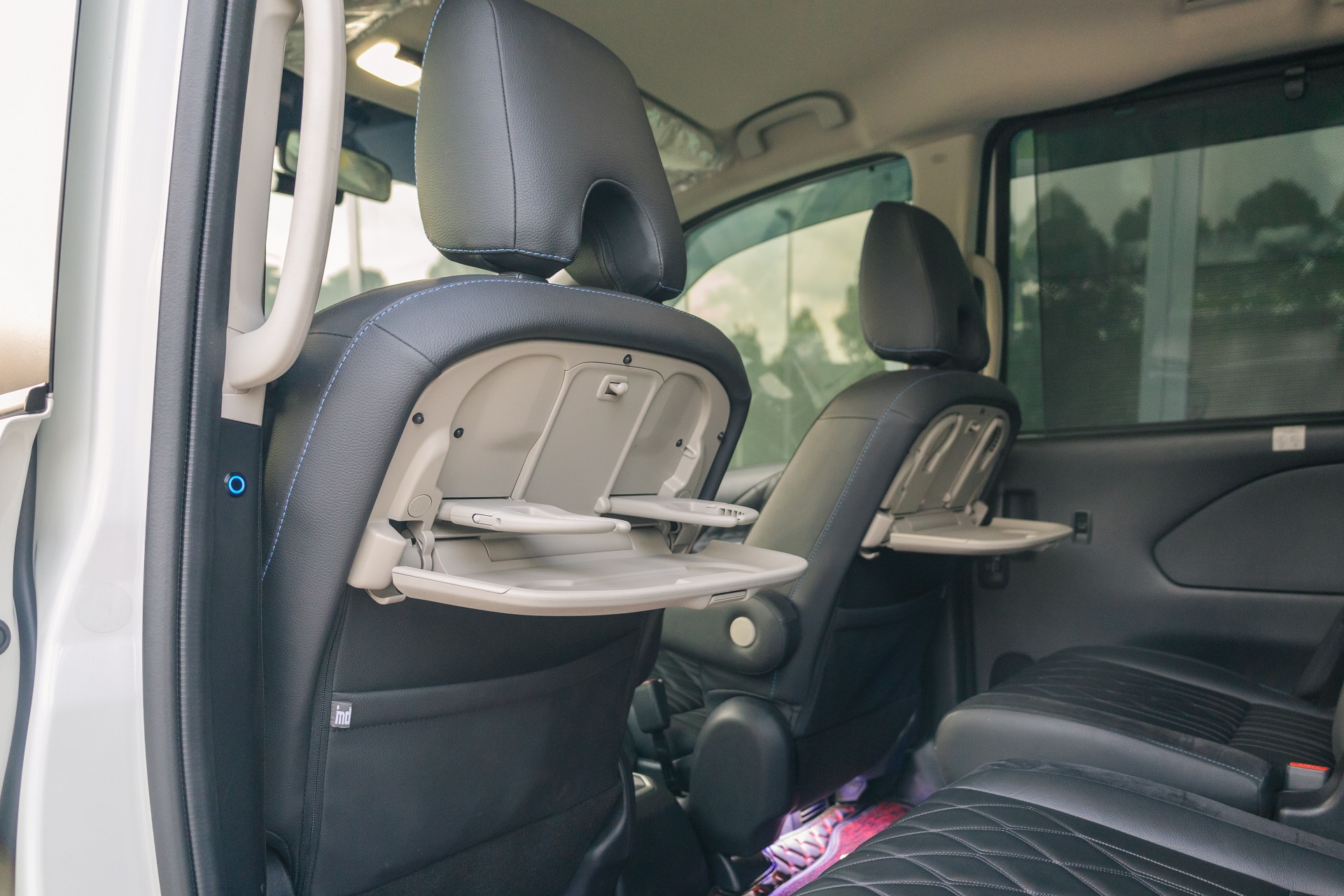 The seats in the first and second row all have their own individual armrests, with airplane-style tray tables for passengers in the second row to use. These can be folded out to place your personal effects and drinks. Ample legroom is available for all passengers, making long journeys in the Serena quite comfortable.

Strangely, the dashboard is a mix of hard plastics and leather in contrasting colours. With this large a dashboard, however, it allows for hidden storage compartments besides the glove compartment. Directly behind the steering wheel and on top of the glovebox are two additional storage compartments for small items like your wallet, sweets, sunglasses case, etc. 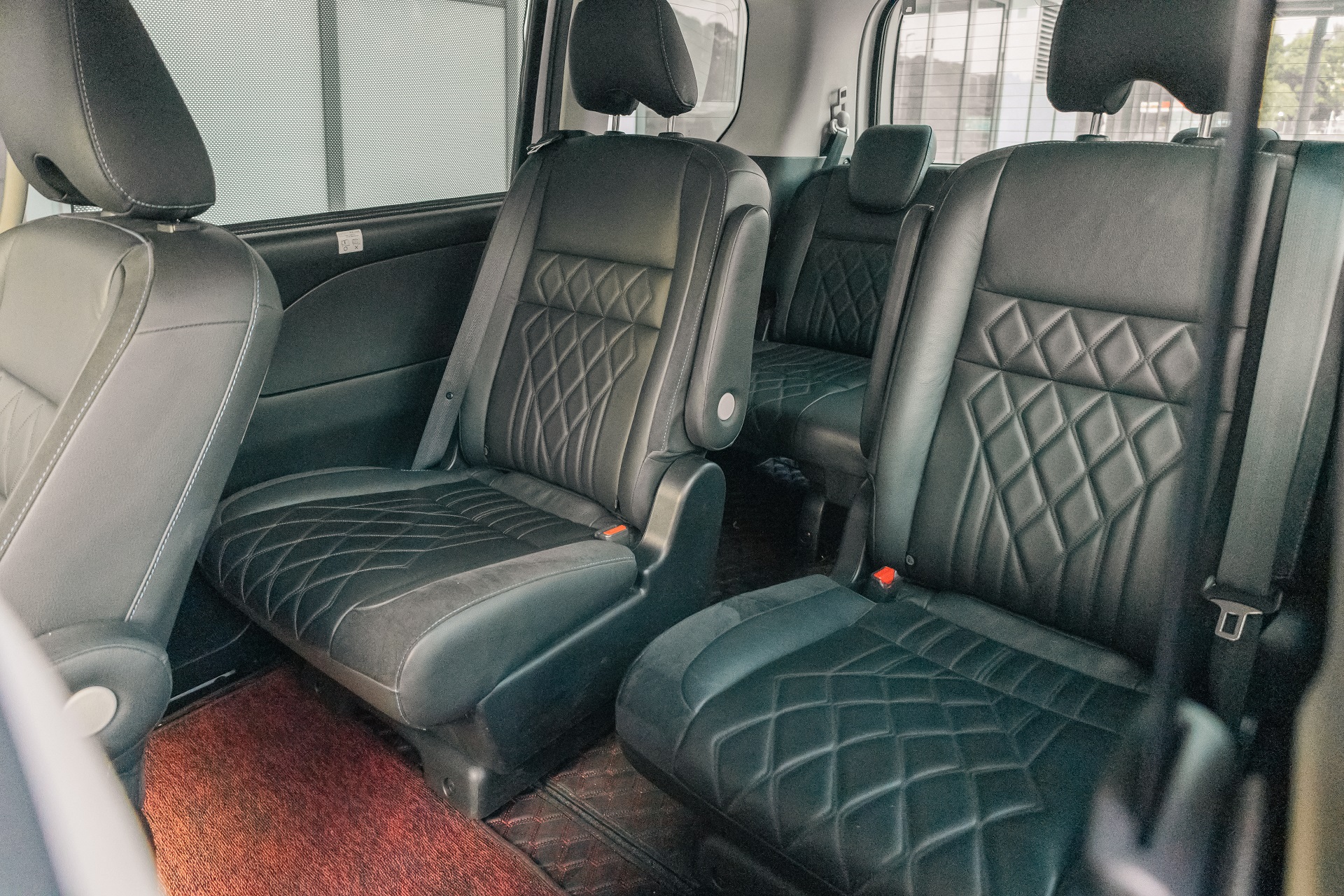 The gauge cluster is sizeable with two separate screens. The one in the driver’s eyeline displays the speedometer, while the screen beside it displays information like the level of charge in the batteries, power flow, fuel gauge, remaining range, the percentage of power used, and other necessary bits of information. Visuals are clear and easy to read, even if the screens may seem to be some distance away from your eyes.

The infotainment system is simple and intuitive to use, with hard buttons for various functions, as well as a physical volume knob. Android Auto and Apple Carplay are also included, with the screen visuals being clear and relatively easy to read. Still, the screen is a little small, although this can be easily rectified by fitting an aftermarket head unit.

The HVAC system is simple and straightforward, with hard buttons for all the controls, which makes adjustments even while driving a breeze. There are also air vents in the rear for the second and third row passengers, which allows all passengers to enjoy the air-conditioning, which blows strong and cold.

The rear air-conditioning can also be adjusted independently of the air-conditioning in the front, either from controls in the second row or from the front controls. This allows for the cabin to be cooled down faster, which is useful given the Serena's size. 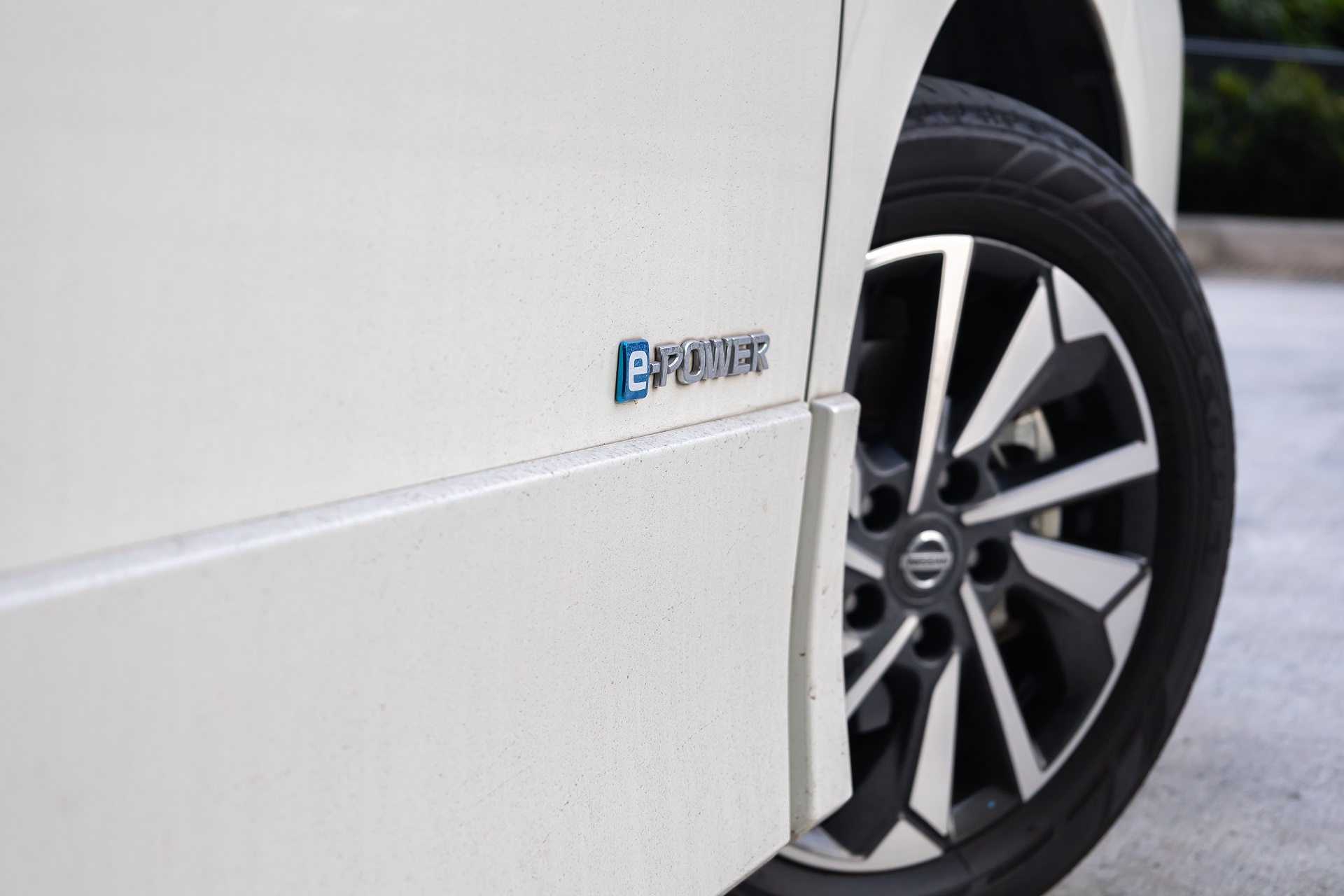 With the Serena being a multi-purpose vehicle (MPV), it has certain features other cars typically don’t. The rear doors can be opened or closed electrically in a few ways, either by pulling on the handle, pressing a button on the external handle, or by pressing a button installed on the B-pillar.

Additionally, the seats in the second row can be adjusted forwards, backwards, even sideways, on top of being able to be reclined, which provides for more adjustability in the cabin if you wish. The third row can also be folded down if not in use, or folded up completely should you want to increase the boot space.

With all the seats up, boot capacity is only at 280 litres. Fold the last row up, and boot capacity increases to 815 litres, which would easily fit four golf bags and some soft bags too. There is a sizeable compartment under the boot floor to fit loose items as well, should the need arise. 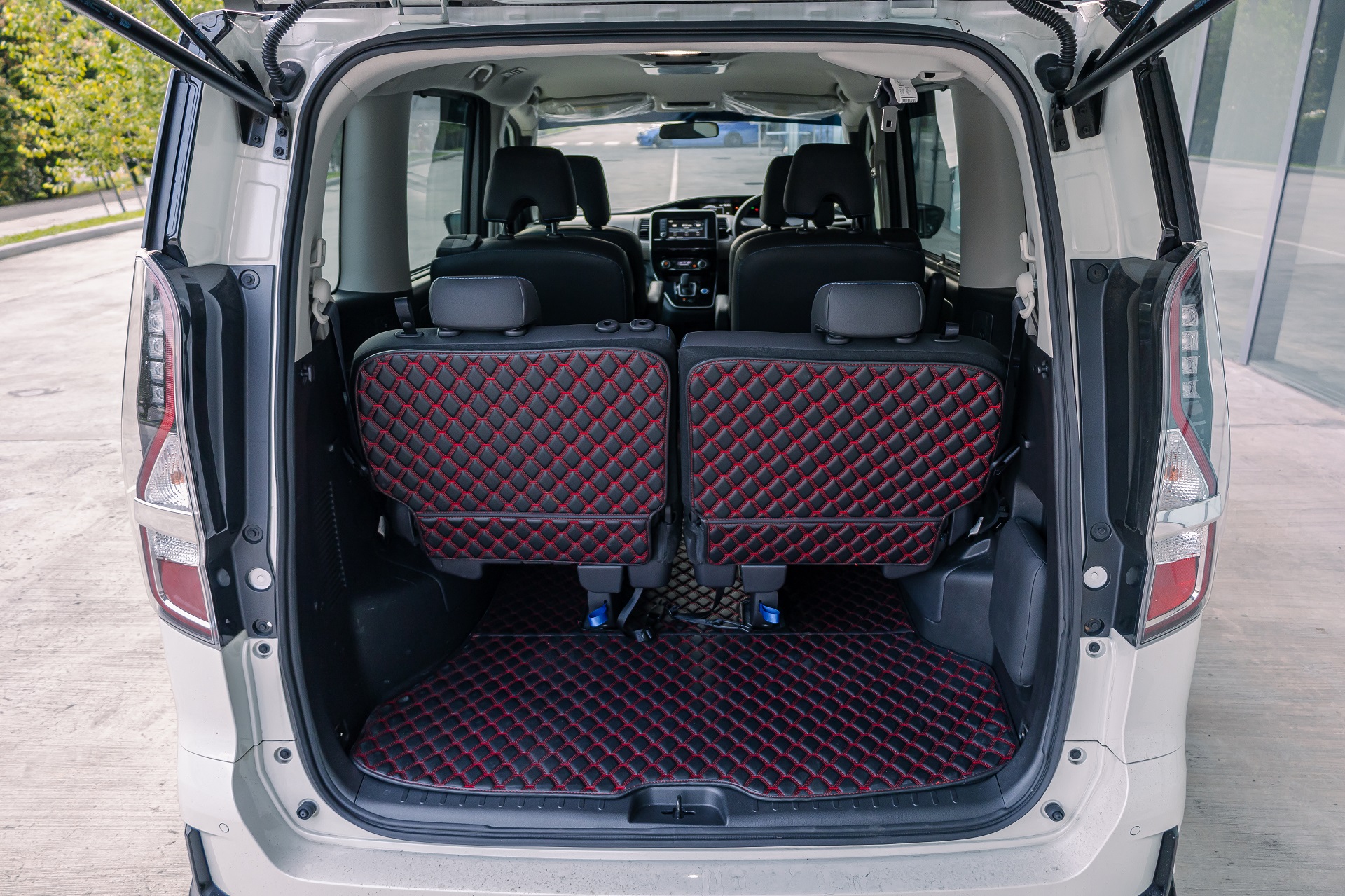 With the tailgate being quite large, opening it in tighter spaces might be an issue. Nissan thought of this, and the rear window can be opened independently of the tailgate for easy access to the boot area. ISOFIX points are only available in the second row, if fitting child seats is required. Also, there is no spare tyre or tyre inflation kit, so if you have a flat, get ready to call for a tow. 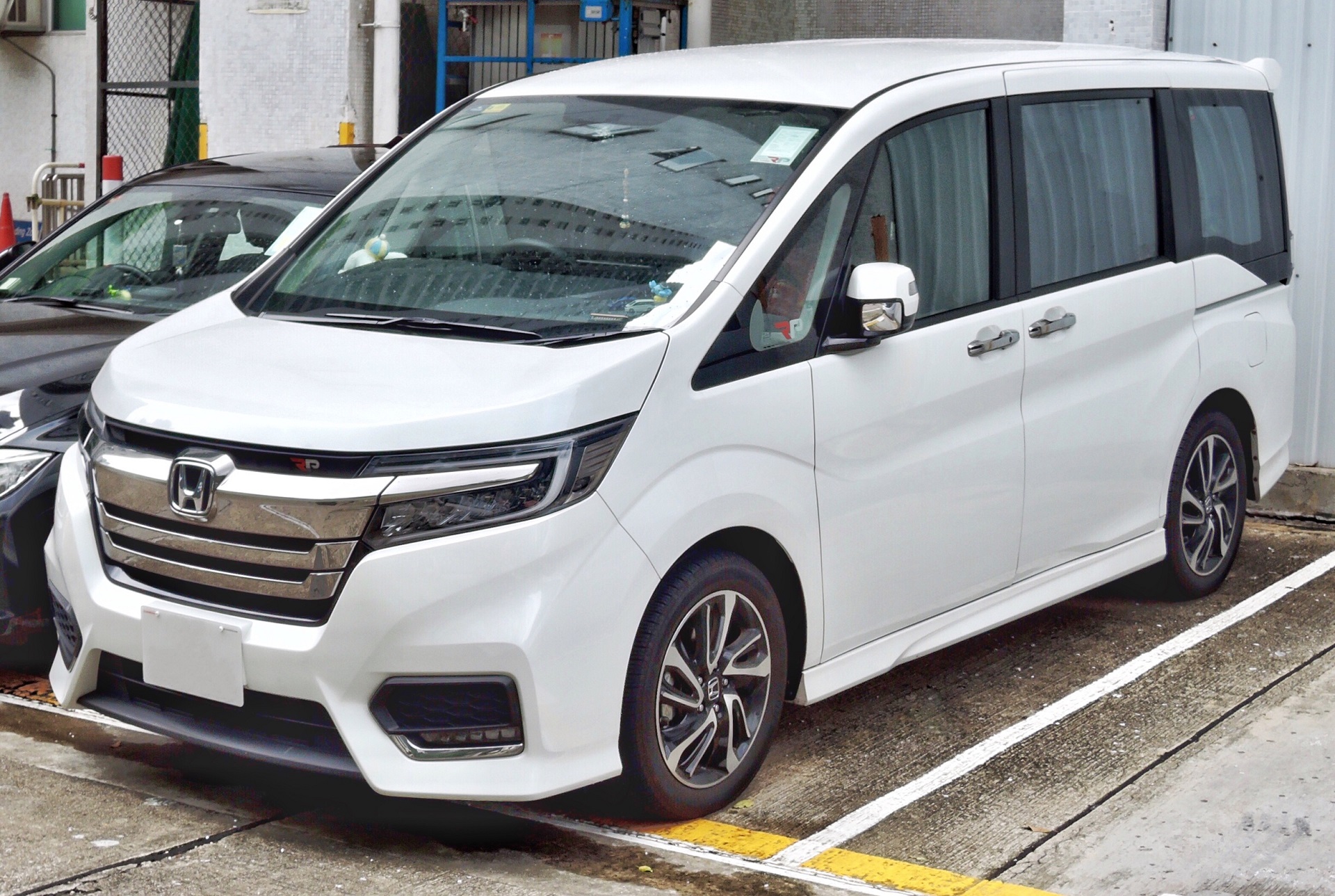 If you don't fancy a Serena but still want to stick to a Japanese car, then the Honda Stepwgn and Toyota Noah (also known as the Esquire or Voxy) would be ideal options. 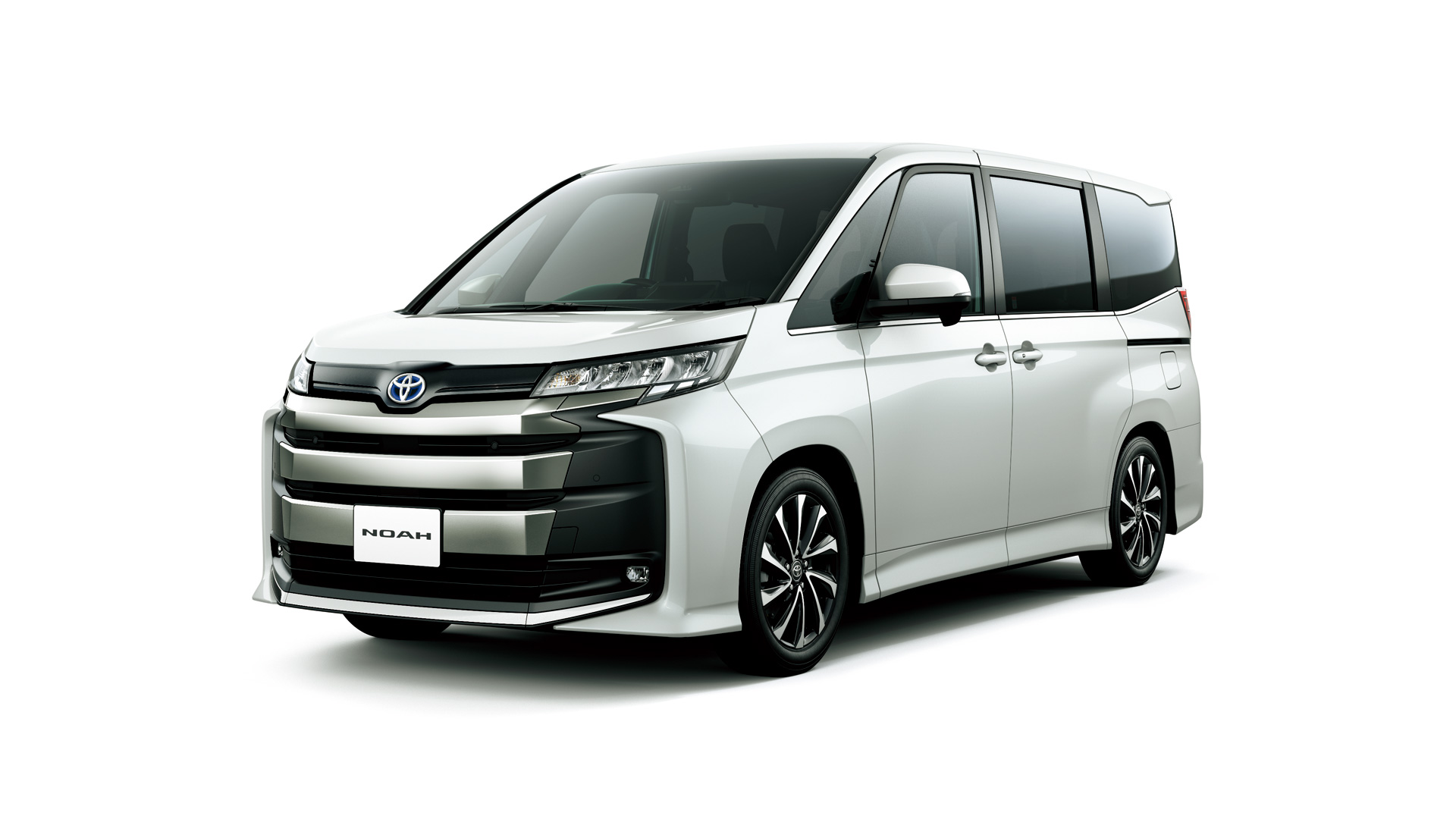 These vehicles compete in the same segment as the Serena, and are built to the same size limits as stipulated by Japanese Government regulations for "normal-sized passenger vehicles". Both cars have slightly more power, are also available as hybrids, and can fit just as many passengers, so it would almost be up to personal choice at this juncture. 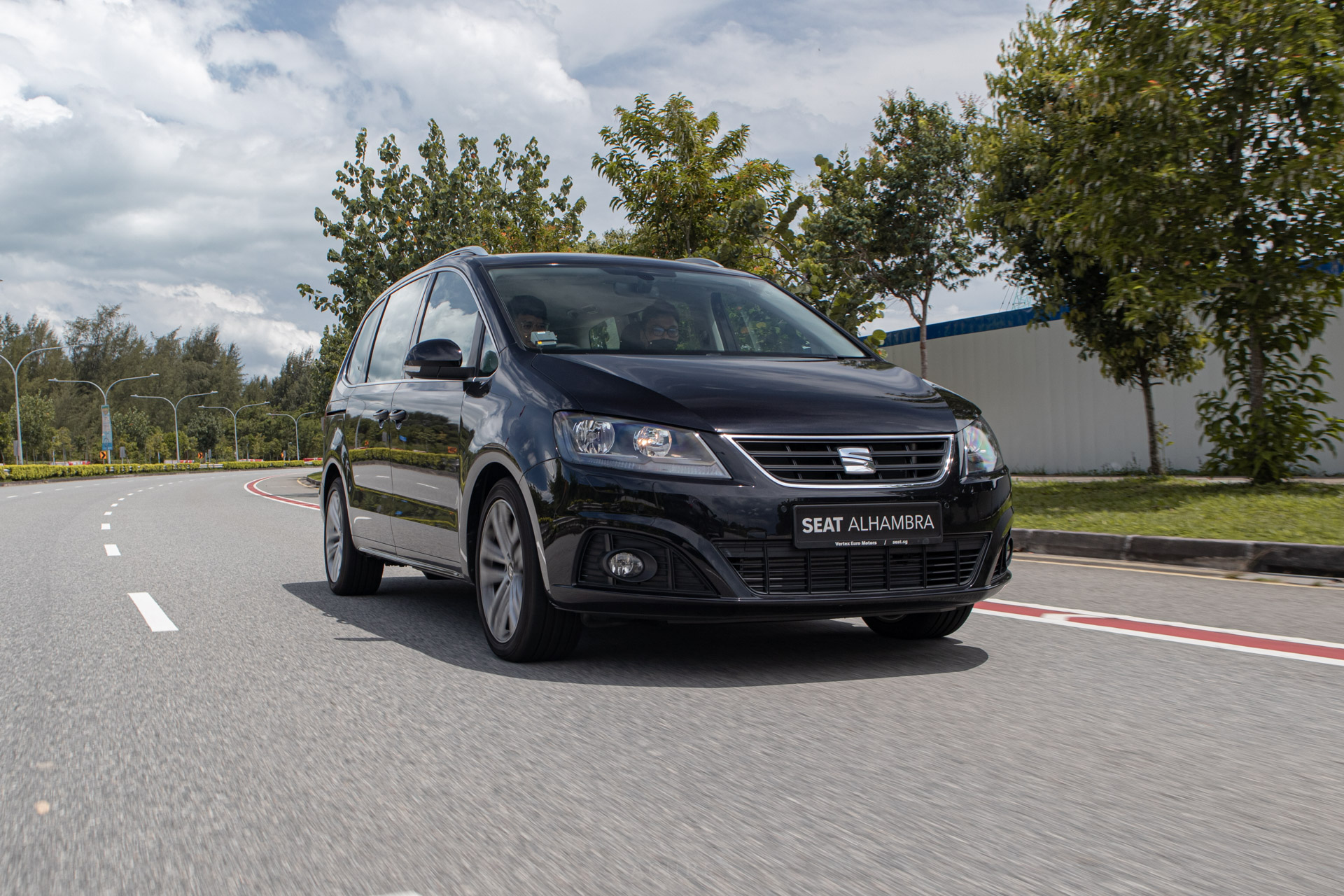 If you still want a spacious seven seater, but prefer something continental, how about the SEAT Alhambra? We have even done a review on one! It comes with space for seven, in-built booster seats, and 220 horsepower, which would definitely make for some fun driving in a car which can haul your entire family and more.

Nissan designed the Serena to look as daring as it could, while still trying to appeal to the audience who would buy vehicles in this segment, which means they couldn't go too over-the-top with the design, lest risking turning clients off with a design that is too avant-garde or risqué.

Still, for what it is, unless you were to go upmarket to the Nissan Elgrand or the Toyota Alphard, the Serena still performs its role admirably. Yes, it is lacking a lot in power, but it makes up for it in excellent fuel economy and passenger comfort, which could be a worthwhile trade-off. Owners have complimented the Serena on how comfortable it is for longer drives, and from the looks of it, there is little reason to doubt their words.

If you are keen on getting a Nissan Serena as your next car, or any other used car for that matter, do take a look at our used car selection here for some of the best deals!

Motorist would like to once again extend our thanks to Sphere Automobile for loaning us the Nissan Serena for this article.