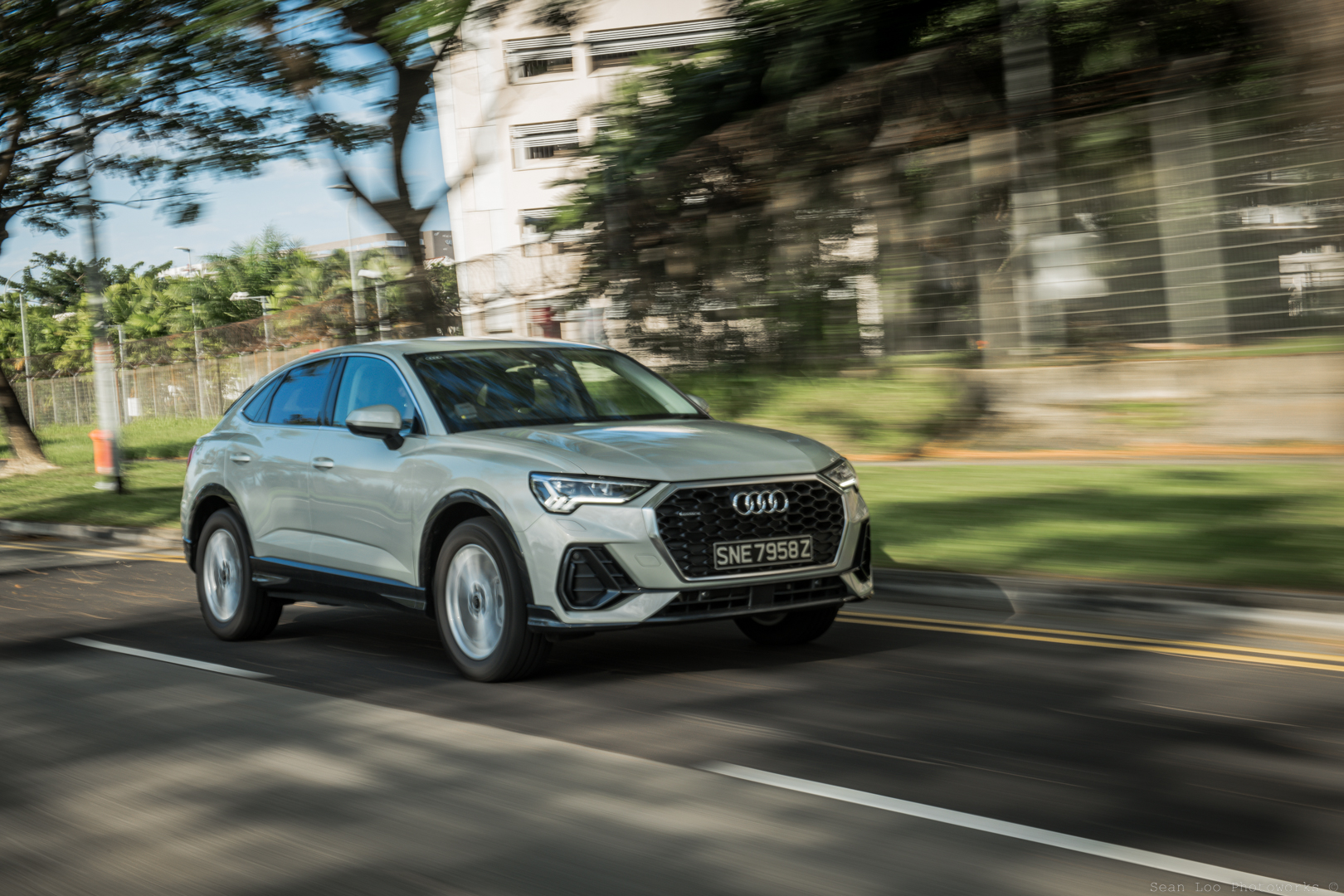 It's an open secret that Volkswagen AG absolutely loves their EA888 powerplant. From hatchbacks to large executive saloons, it's quite literally everywhere in their portfolio. But that's not a bad thing, as this revised Audi Q3 Sportback shows.

With this update, the Ingolstadt-based carmaker has managed to squeeze out about 10 horses more from the turbocharged four-pot powerplant, bringing the grand total up to 190 horsepower. Torque remains the same at 320 Nm. Not exactly the most exciting EA888 variation (on paper), we admit, but that's not the main draw.

The real star is its new VES band, which now stands at B. This means that car buyers will no longer be slapped with an emissions surcharge when you buy a Sportback, unlike its predecessor which held a C2 band.

Hitting The Spot In Design 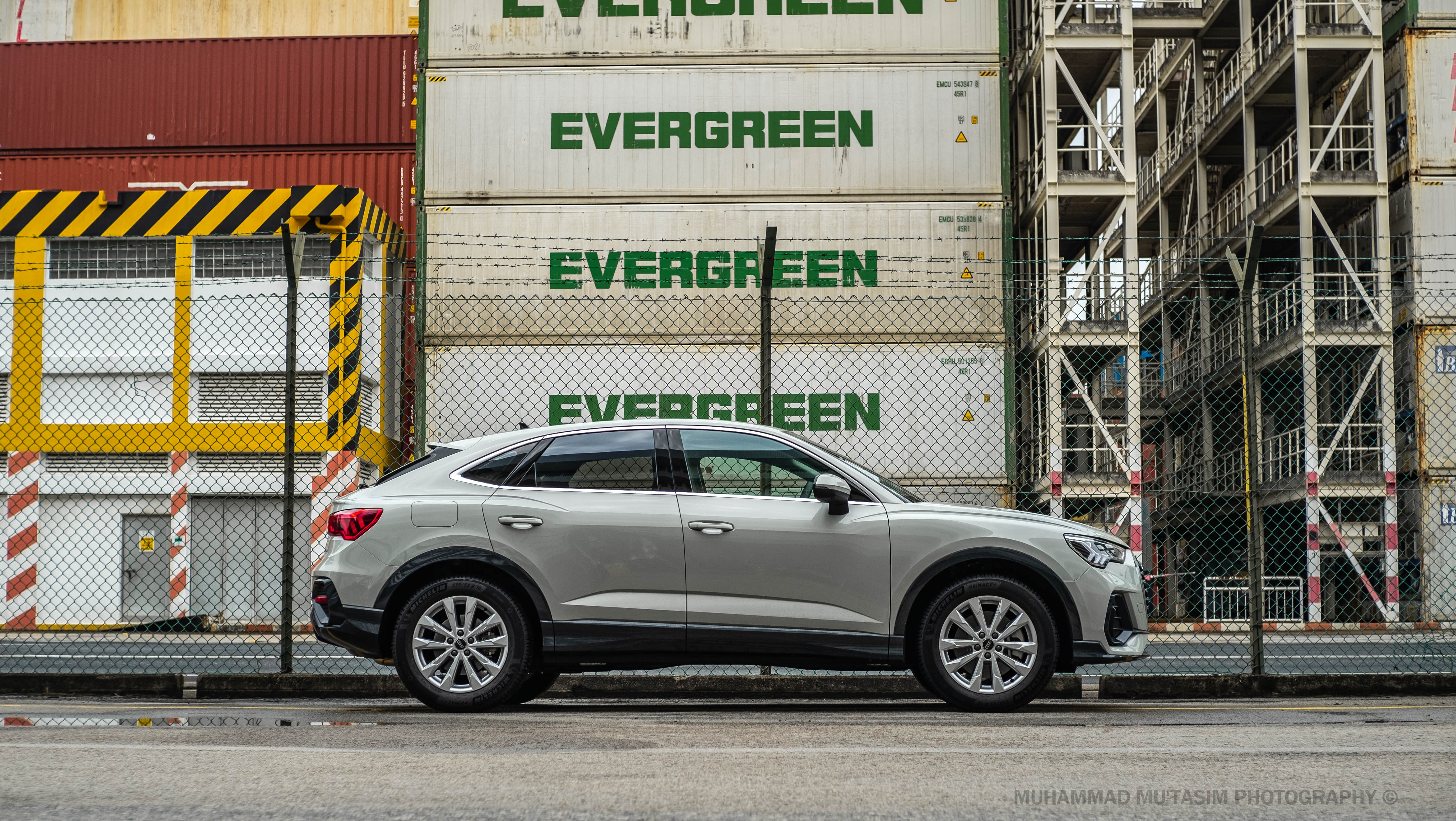 Visually-speaking, we think the Q3 Sportback is one handsome crossover. Its sloping roof line works remarkably well with the muscular arches on the four corners, providing a good mix of elegance and aggression. Even if the car is decked out in monochromatic paint, the Sportback manages to stand out from the crowd with its widebody-like silhouette. Our unit comes in Dew Silver Metallic, which seemingly changes shades depending on the lighting.

The plastic cladding found around the car is in gloss finish as well, hinting at its urban city slicker nature, rather than an all-out dune basher. 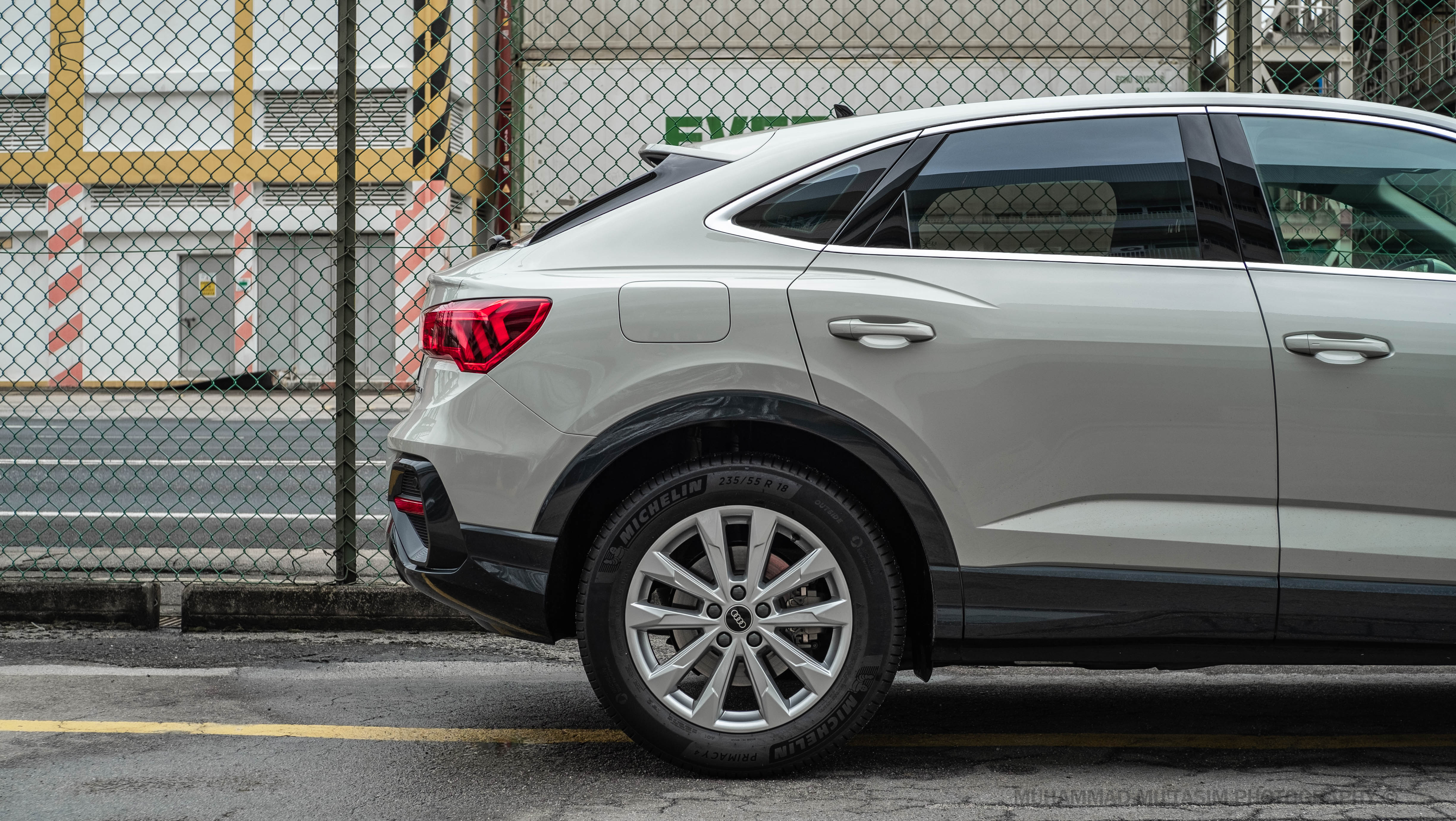 Keeping the Sportback planted to the tarmac is a dependable set of 235/55 R18 Michelin Primacy 4 tyres, which do a great job in both traction-related duties and insulating the cabin from unwanted external noises. 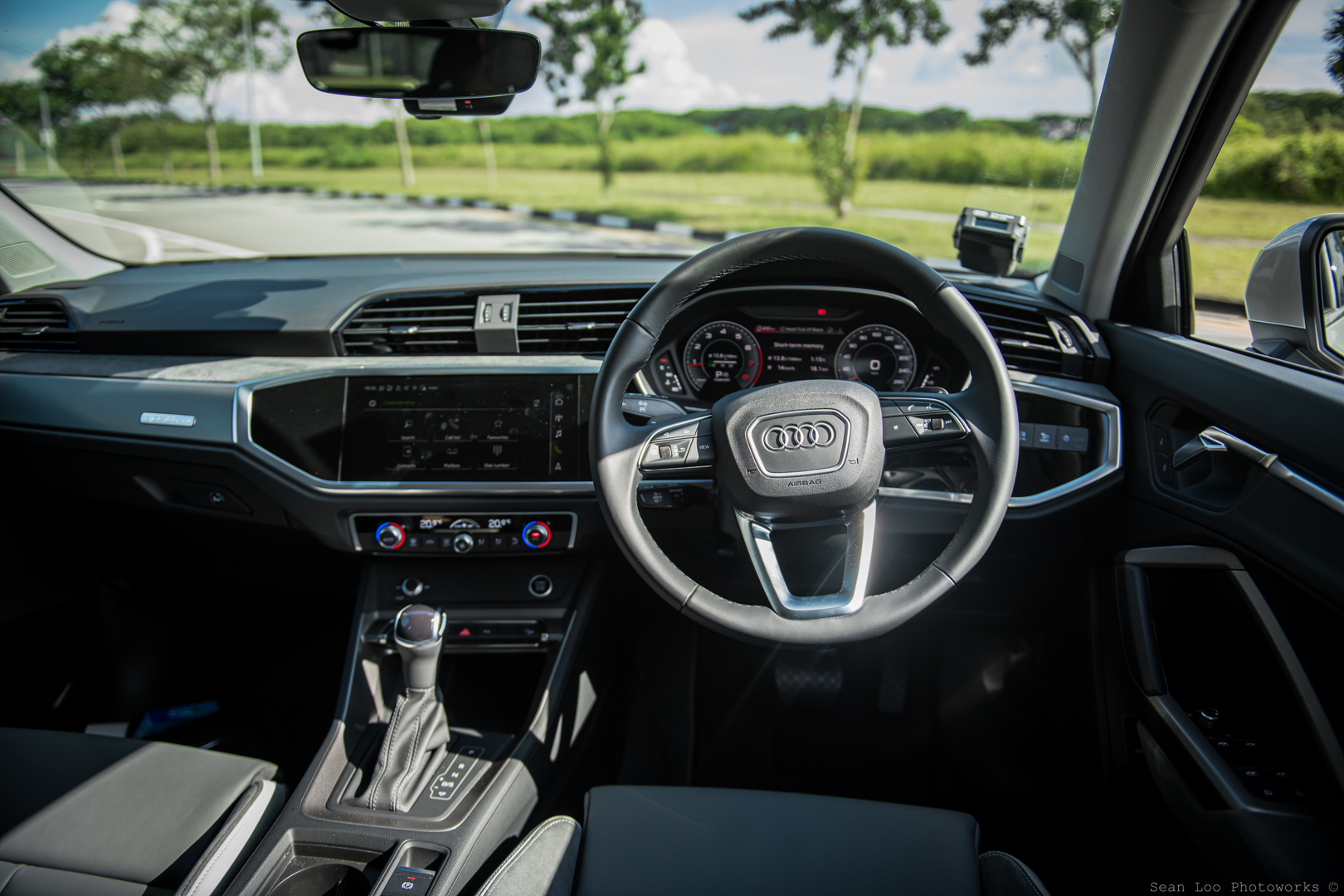 The interior space is, well...a quaint space to be in. It features certain components and switchgear found in older-generation VAG products, but they are by no means bad!

We're all for tactile physical knobs and dials, especially when it comes to HVAC controls. It's even got a traditional shift lever, which bears a strong resemblance to the one found inside its Volkswagen Tiguan cousin.

The instrument cluster is fully digital and expansive, and navigating through the different view settings and car information is a breeze thanks to simplified steering-mounted controls. Swiping through the 10.1-inch Audi MMI system was also a simple experience, made even better with Apple CarPlay and Android Auto support. 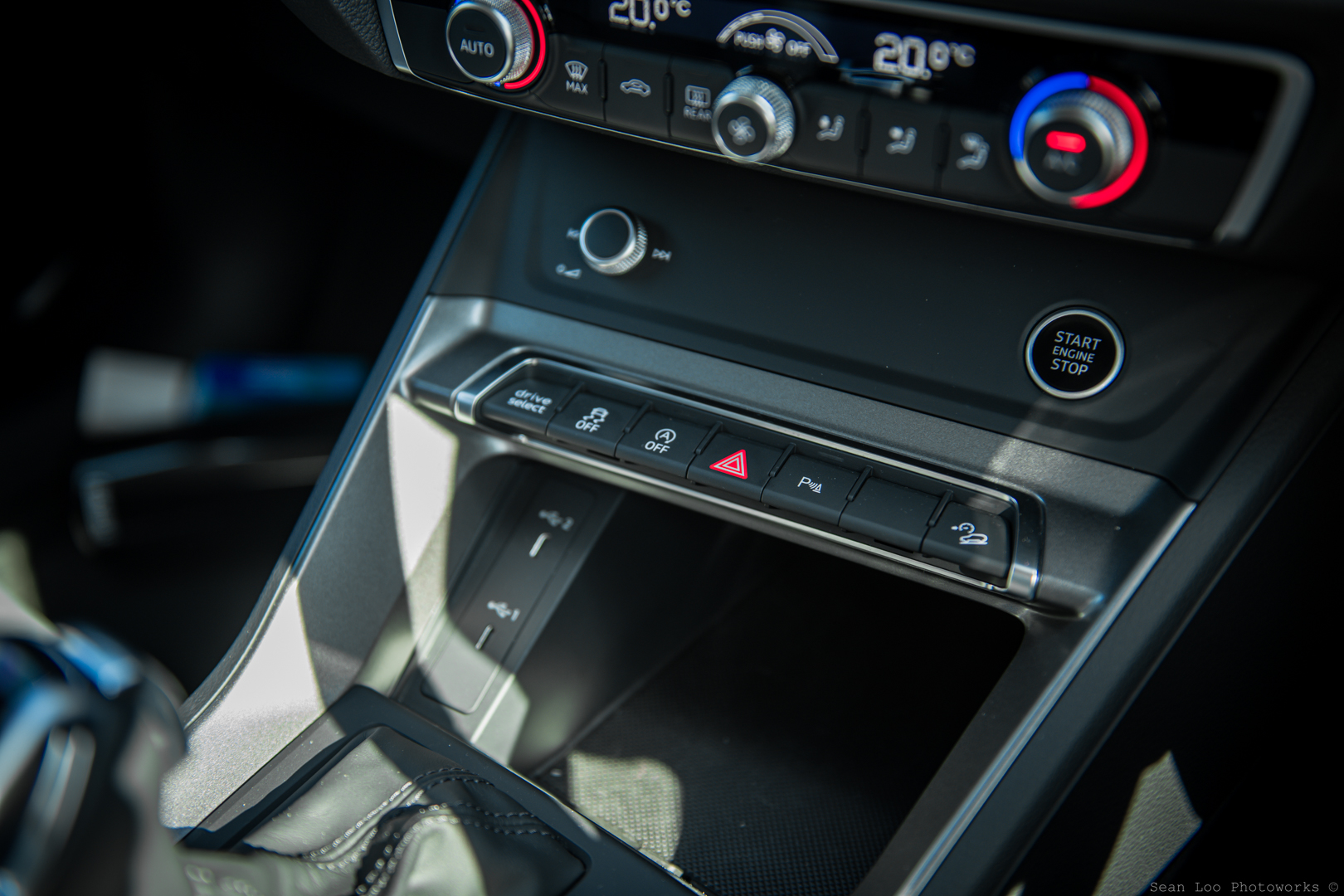 You'll also find that the cabin is chock-full of soft-touch materials, supple leather and metal-finish trim pieces, just like its more expensive brethren in the Audi lineup. If there's a complaint to be made, it's that some of the door card materials are dull black scratchy plastic, which dampens the bougie experience one might expect from a premium car.

Two USB Type-C ports are made available on the centre console, although wireless charging functionality is nowhere to be found, which is a slight disappointment but not a dealbreaker. Rear passengers are provided with two additional USB Type-C ports, along with a 12V socket. 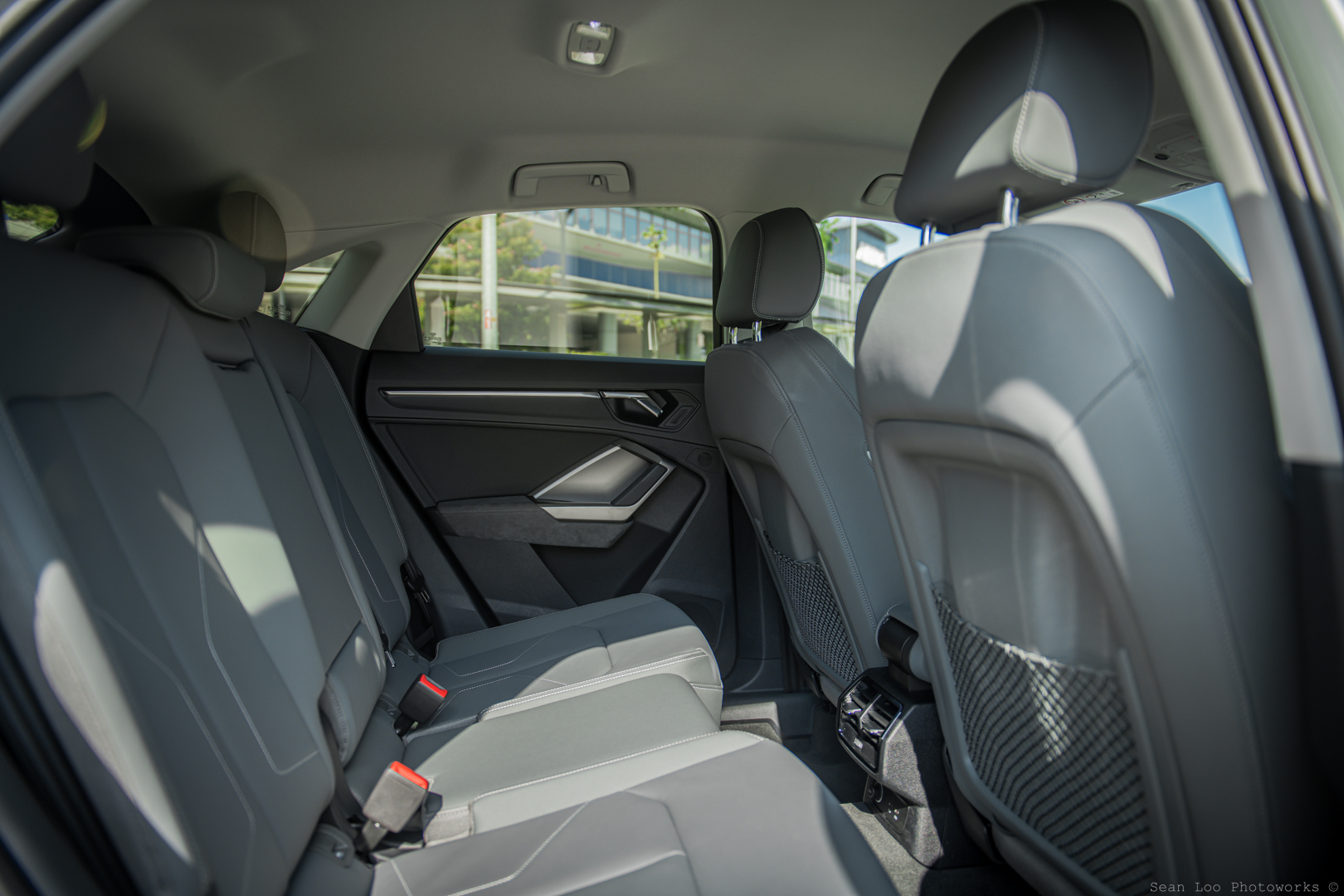 The rear cabin space is surprisingly spacious as well. My colleagues and I – all about 1.75 metres in height – found it perfectly comfortable sitting inside. The sloping roof line does not begin until it's past the rear headrests, so headroom is not compromised at all. Additionally, occupants can expect to stay cool behind, thanks to the rear AC blowers.

While it is a three-seater at the back, the floor hump (to accommodate the Quattro mechanical gubbins) does take up some valuable space for the legs. This means that for longer journeys, like drives up to KL, it is better-suited for two adult passengers. 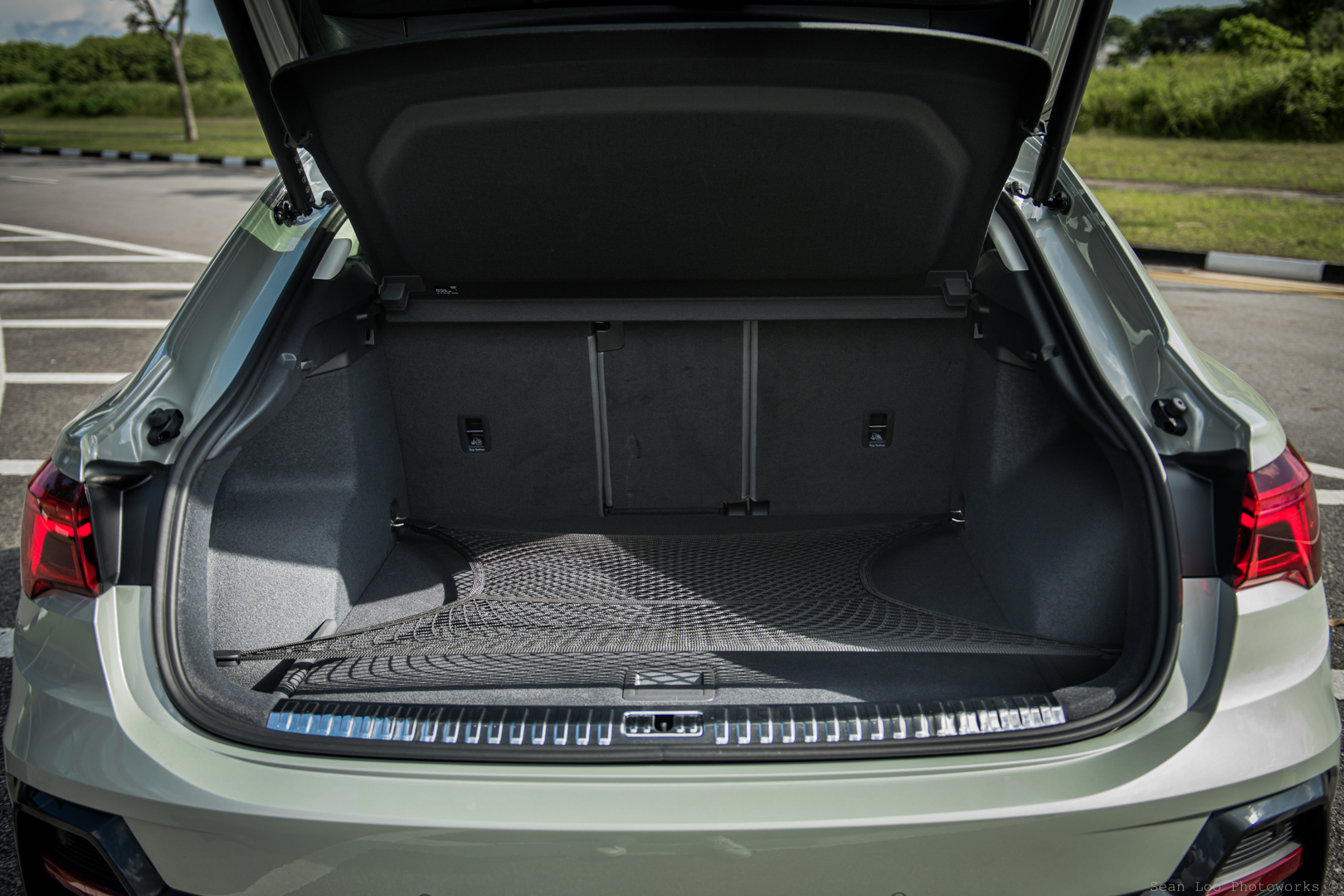 For a coupé-like SUV, the Q3 Sportback sports (no pun intended) a pretty cavernous boot. Expect up to 530 litres of usable space, and a shallow load lip for easy loading/unloading. The 40:20:40 split rear seats are mighty useful too, in the event you need to load up objects of varying dimensions. 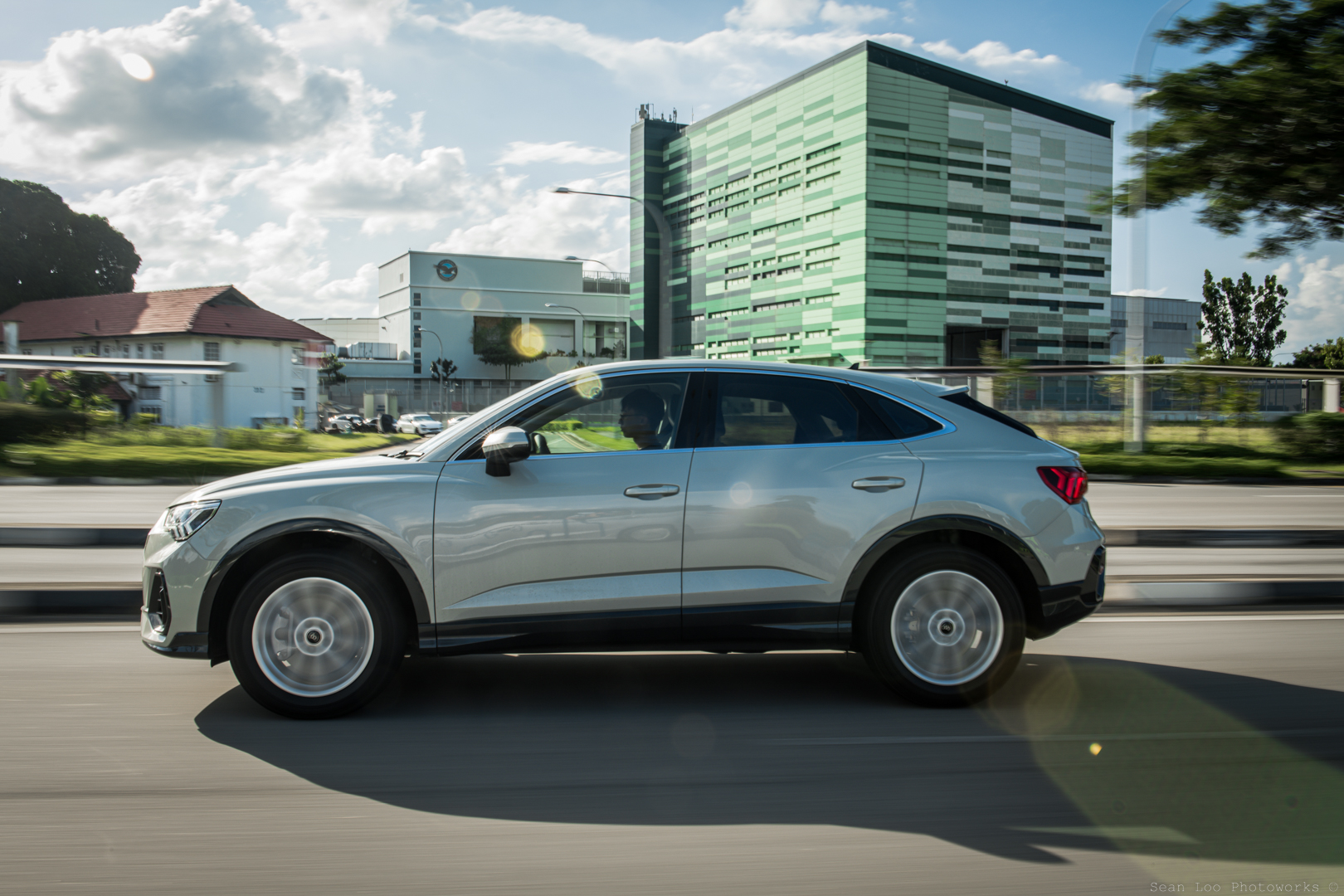 As mentioned at the start of this article, the Q3 Sportback is powered by a 2.0-litre EA888 engine with just under 200 horses under the bonnet. It's neither the quickest off the line, nor the most responsive in terms of power delivery, with a second or so needed for the turbo to spool up.

But in our local context, it's generally more than adequate. Once the Sportback is on expressway speeds, overtaking maneuvers are breezy and fuss-free. The Quattro all-wheel drive system further sweetens the experience by keeping all wheels in motion, while the seven-speed S Tronic gearbox keeps the cog-changing process fast and snappy. 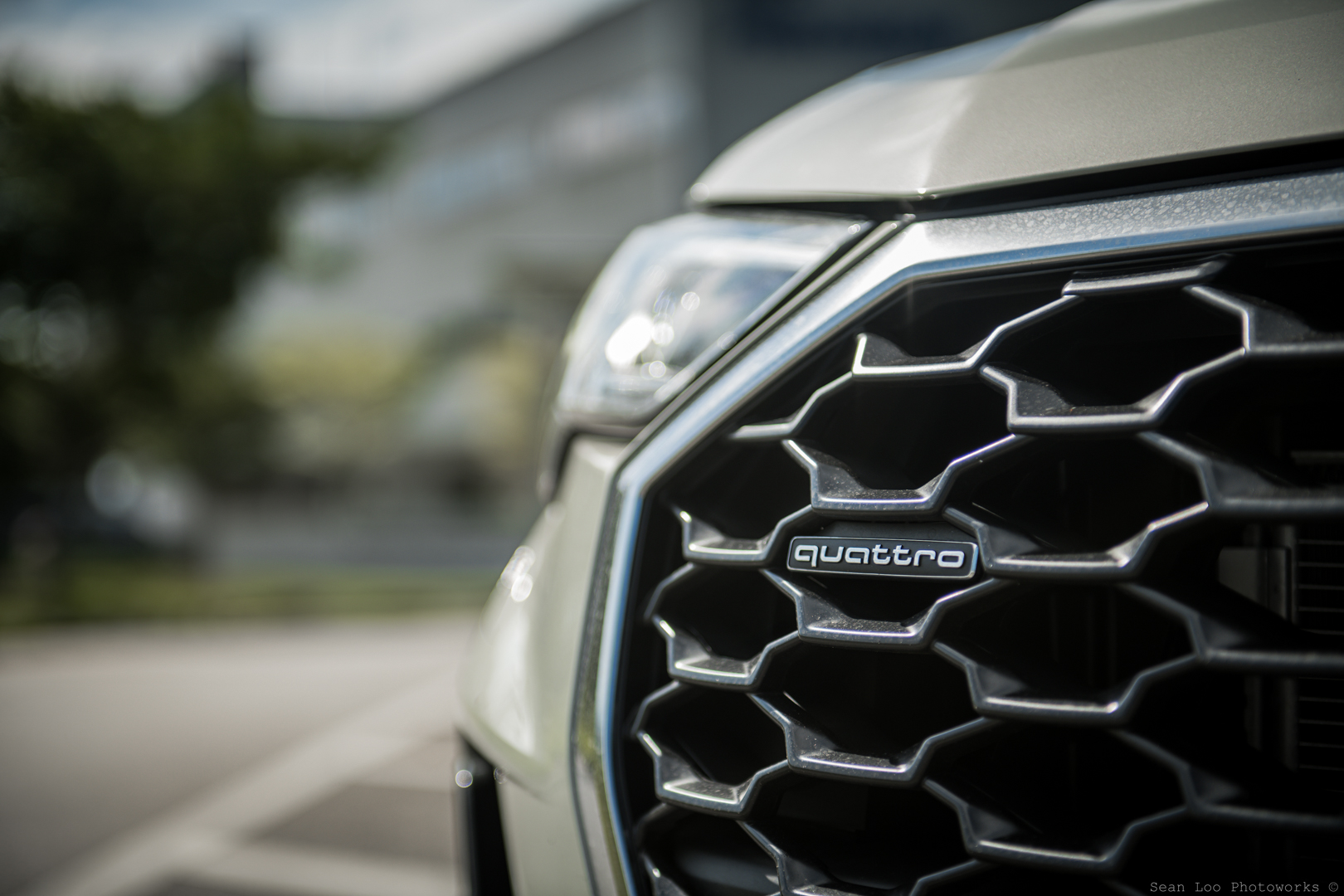 Its stability on expressway straights and around the twisty roads inspires driver confidence, and showcases the brilliant MQB-A2 setup that's designed to tackle all sorts of road conditions. The analogue sensation we got from being behind the wheel was also a major plus, unlike many other modern cars with over-assisted steering functionality.

If we're being honest, it does seem like we're commandeering a slightly detuned CUPRA Ateca, which is another highly competent cousin of the Q3 Sportback. 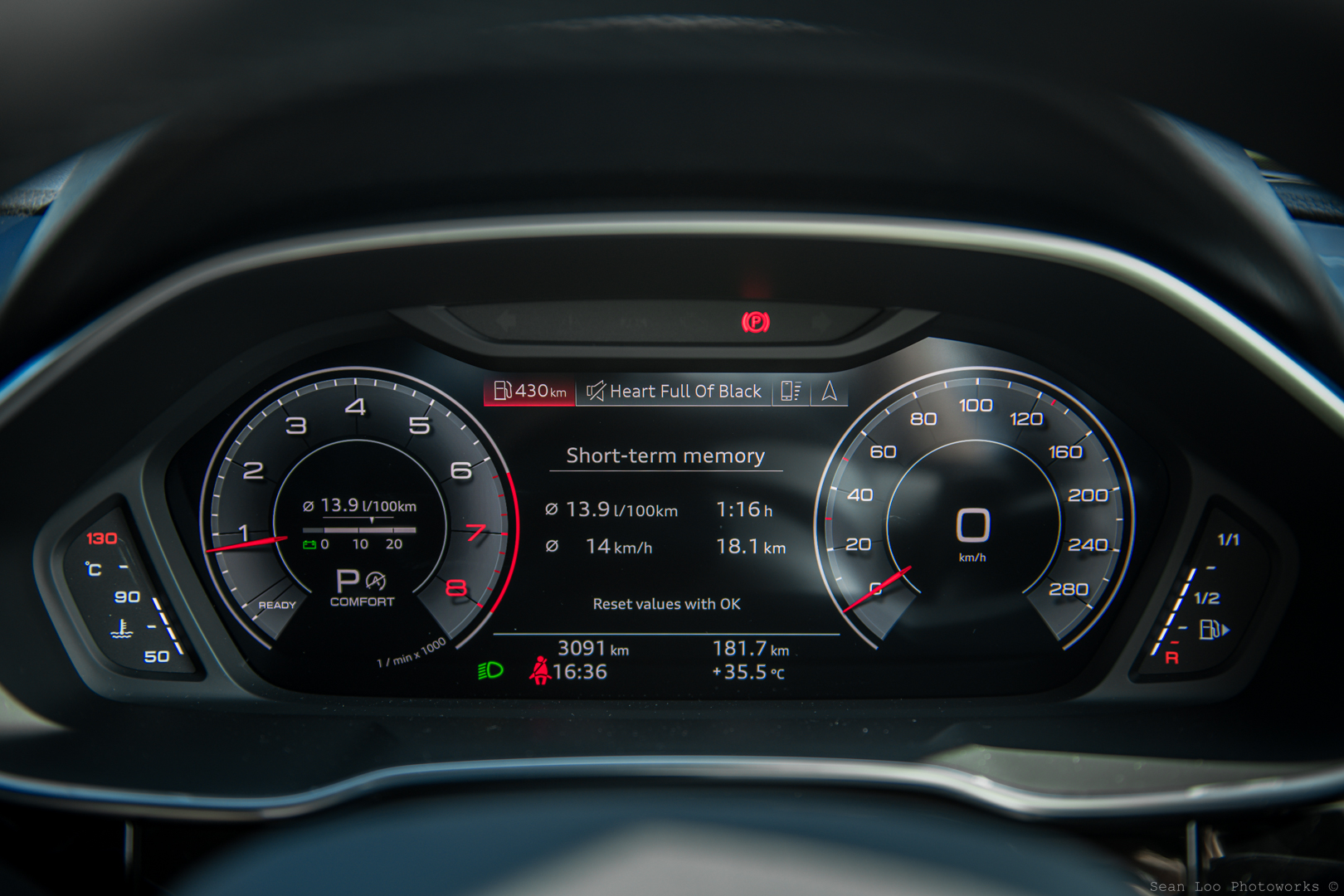 This does present a small issue, though. Due to its willingness to be pushed hard, drivers may sometimes find themselves being heavy-footed and drinking more fuel than intended. We clocked 13.9 L/100 km, or about 7.2 km/L on average.

With more reasonable driving as a daily driver, the Q3 Sportback should be able to perform much more frugally, with a figure closer to 14.9 km/L.

An Audi For All Seasons 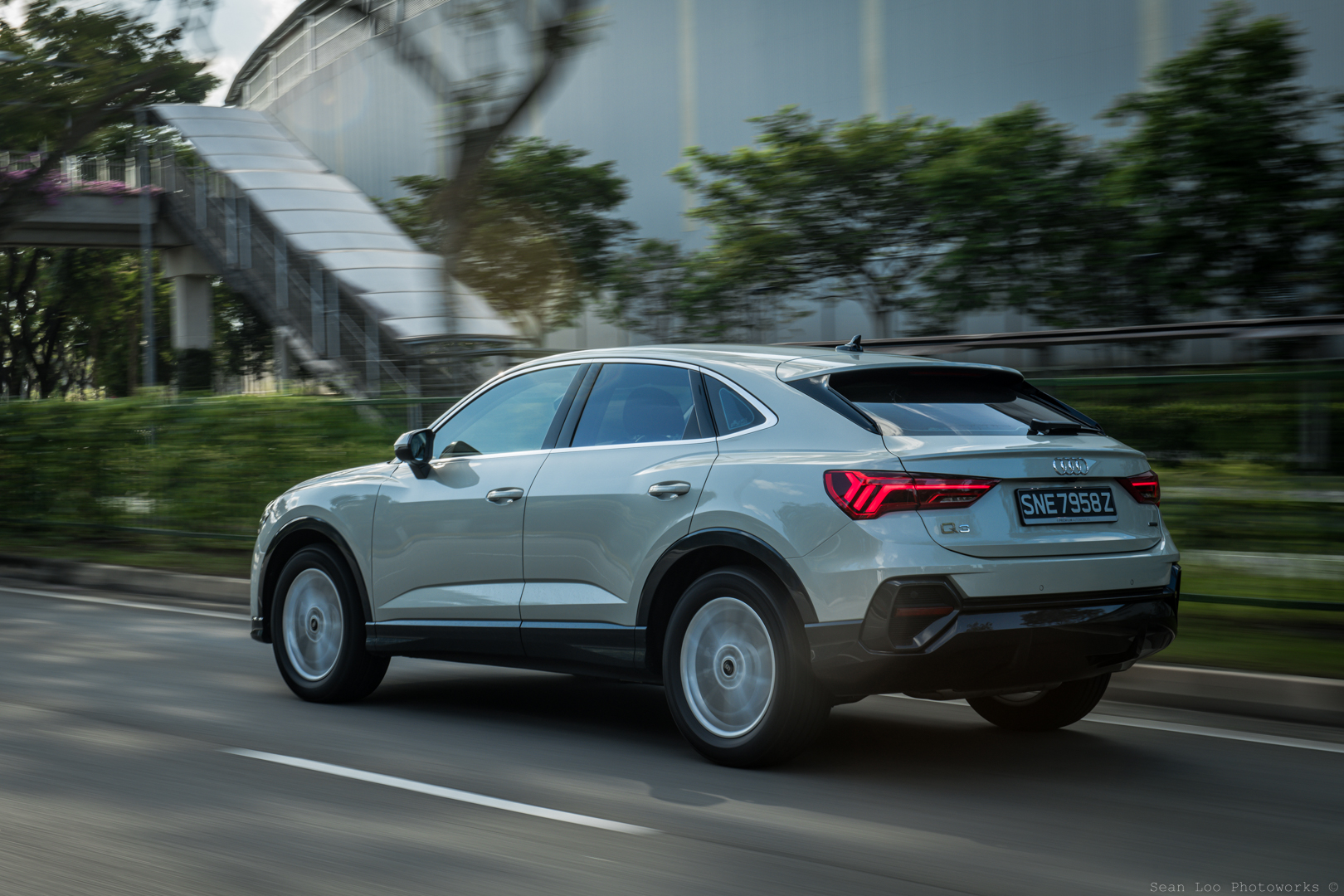 If you're looking for a crossover that can serve its duty as a competent daily driver, while still delivering a nice surge of torque whenever the situation calls for it, the Q3 Sportback is your answer. It's a simple car with not many bells and whistles to fuss about, but more importantly, it's well-made in the areas that matter, and impossibly easy to operate.