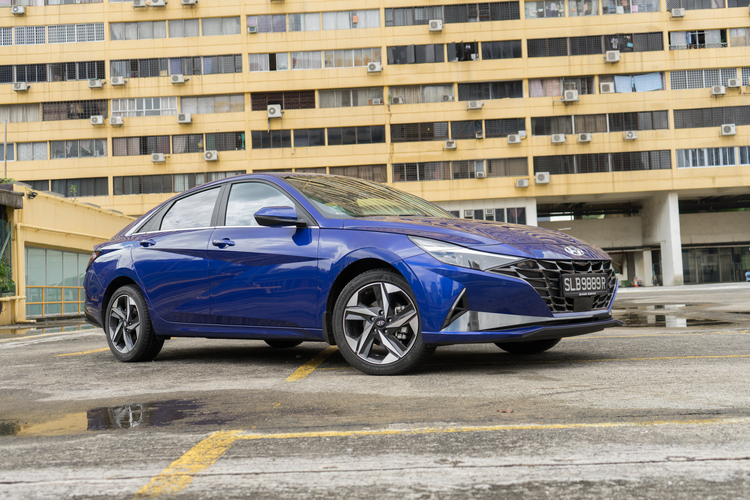 The 2021 Hyundai Avante is a marked development over its predecessor, bringing previously high-end features to the mass market, setting the tone for Hyundai’s evolving brand image.

The previous generation Avante was a car with big NPC (non-playable character) energy, just a filler object in the world, usually passing by unnoticed. It was always a little drab and grey with not much to be excited about, an image we’re sure Hyundai would like to change.

And changing they have been with the launch of the i30N and Veloster N (not available in Singapore) and other N-Line models. Suddenly, people were being awakened to the fact that Hyundai can make exciting cars instead of just another mode of transportation. But how would they change up the Avante, a car people used as the reference when they say “a car is just a car what”?

The 2021 Avante uses Hyundai’s Gamma II 1.6 engine, mated to their SmartStream Intelligent Variable Transmission (IVT) and puts down 123hp and 154Nm of torque. All very normal figures for a car in this segment, but that’s about where the normalness ends and the uniqueness begins. 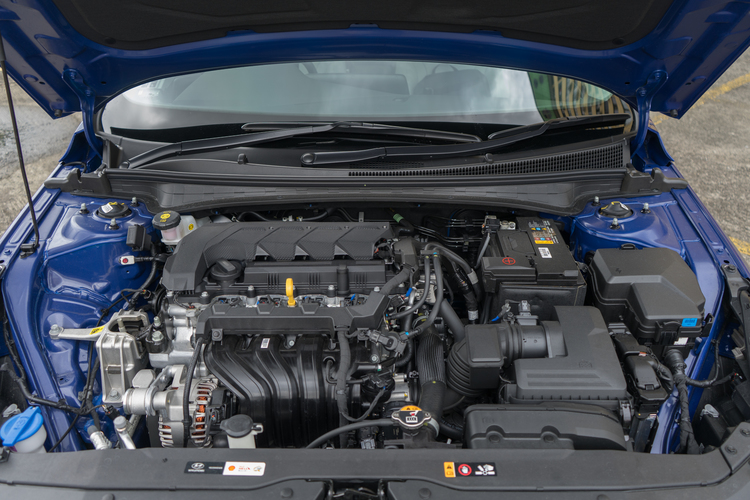 The IVT is in concept a standard Continuously Variable Transmission (CVT) but Hyundai has fettered with it and made it feel surprisingly similar to a standard automatic gearbox. The IVT also makes use of a chain in place of a belt in the transmission to improve durability and efficiency.

Efficiency is a big point of the Avante, as with other cars in the segment. Hyundai claims an 18.5km/l fuel consumption figure, but in our testing, we found it closer to the 16km/l mark, which is still mighty good mind you. They’ve accomplished this through a couple of different methods. First you have the efficient engine and gearbox, then you have the aerodynamics. The Avante has a drag coefficient of just 0.28, allowing it to slice cleanly through the air by reducing drag.

Looks-wise, Hyundai has used a design strategy they’ve called ‘Parametric Dynamics Exterior Design’ and while our press kit came with an explanation chock full of buzzwords, we still don’t really get what it means. All that matters is, it looks good.

It’s got a snubby nose with bold, flowing lines running the length of the car, culminating in a swept-back tail. The headlight array is clean and modern, with LEDs used for both the Daytime Running Lights (DRLs) and headlamps in the ‘Elite’ variant. The ‘S’ gets LED DRLs but with Halogen headlamps, while the ‘Auto’ only gets bulbs for both DRLs and headlamps. 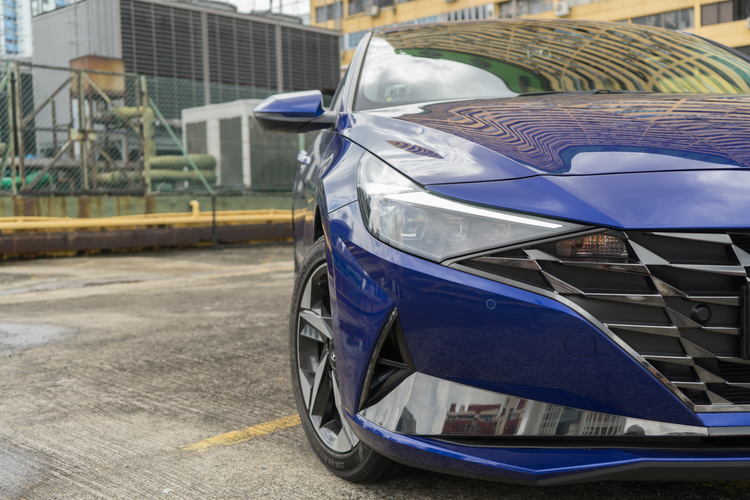 Out back, the rear light cluster is a fresh combination light bar going across the rear to form a ‘H’ for Hyundai. Both ‘S’ and ‘Elite’ models get LEDs here while the ‘Auto’ uses bulbs. 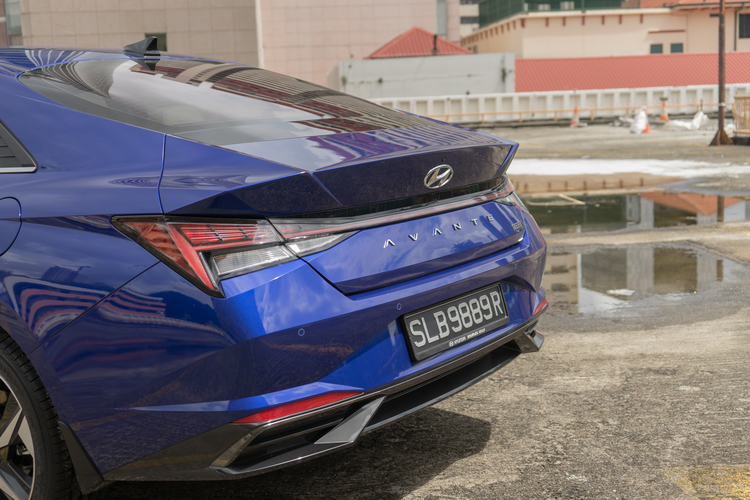 The refreshed design carries over to the rims too, with 15”, 16”, and 17” styles on offer depending on if you get the ‘Auto’, ‘S’, or ‘Elite’ trim level respectively. Our press car was a top of the line ‘Elite’ model, with all the gizmos that Hyundai has on offer. 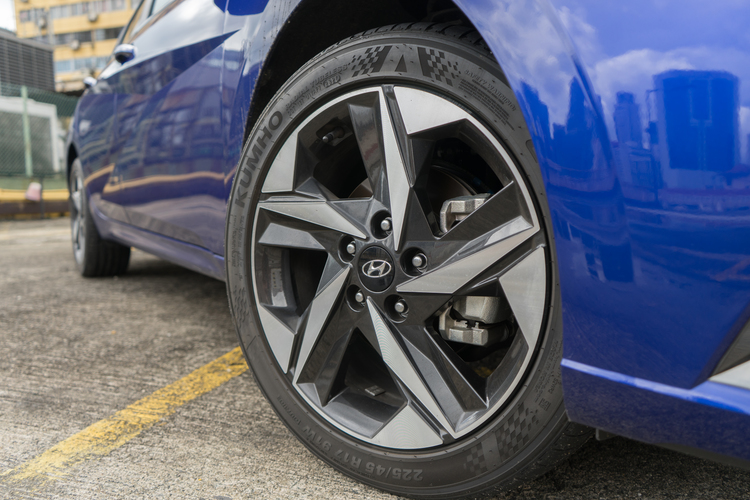 The 2021 Avante is also longer, lower, and wider than the outgoing model by 55mm, 25mm, and 20mm respectively. The wheelbase has also been bumped up by 20mm which gives the new car a much sleeker appearance, a vast improvement over the previous car’s short and stout design. 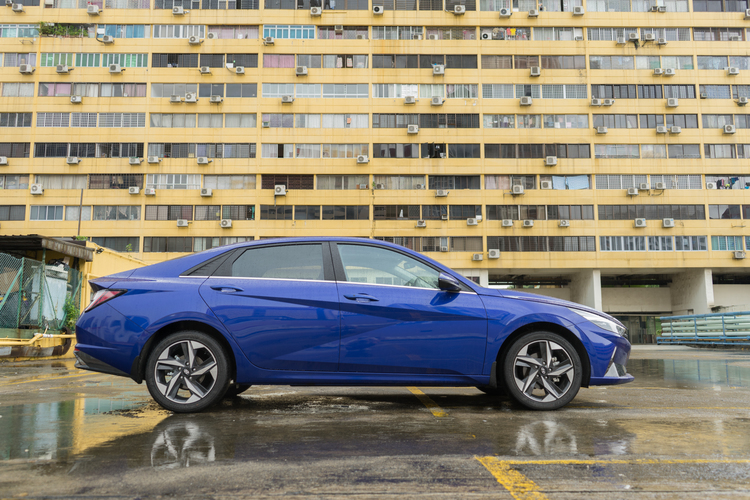 This doesn't mean that the Avante has skimped on passenger comfort though, as it boasts best-in-class rear legroom. The added width also means more shoulder room for the occupants, so you’ll enjoy those long rides in the back seat a little more, not that the inside of the Avante is at all a bad place to be. 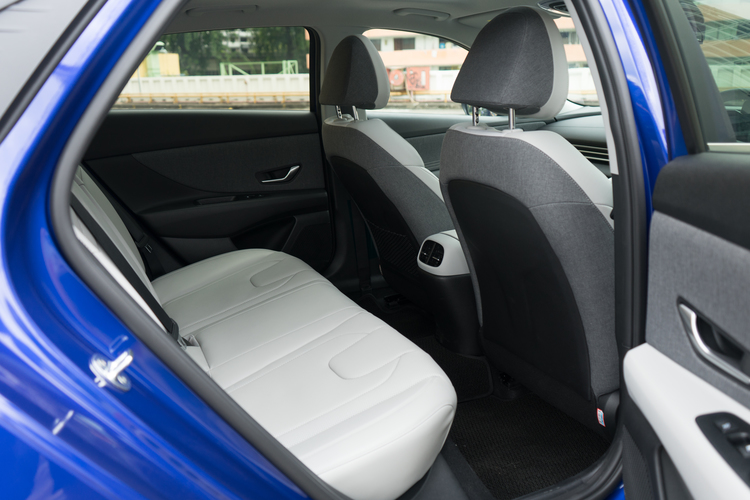 Along with everything else, the interior is also completely new for the 2021 Avante. In the front, an entirely redesigned driver cockpit takes the spotlight. With a 10.25” digital gauge cluster and a funky new steering wheel, it feels like Hyundai has now stepped into the modern age. 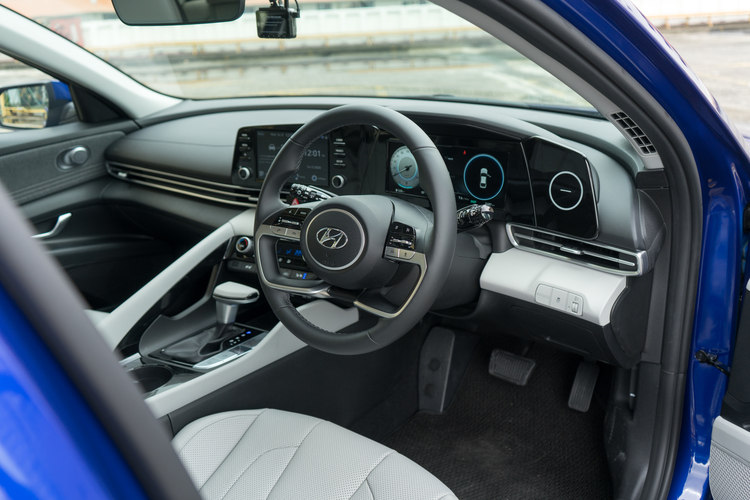 The centre console has its own 8” LCD infotainment system touchscreen display with wireless Apple CarPlay and Android Auto embedded in what Hyundai has dubbed an “immersive cocoon interior layout”. 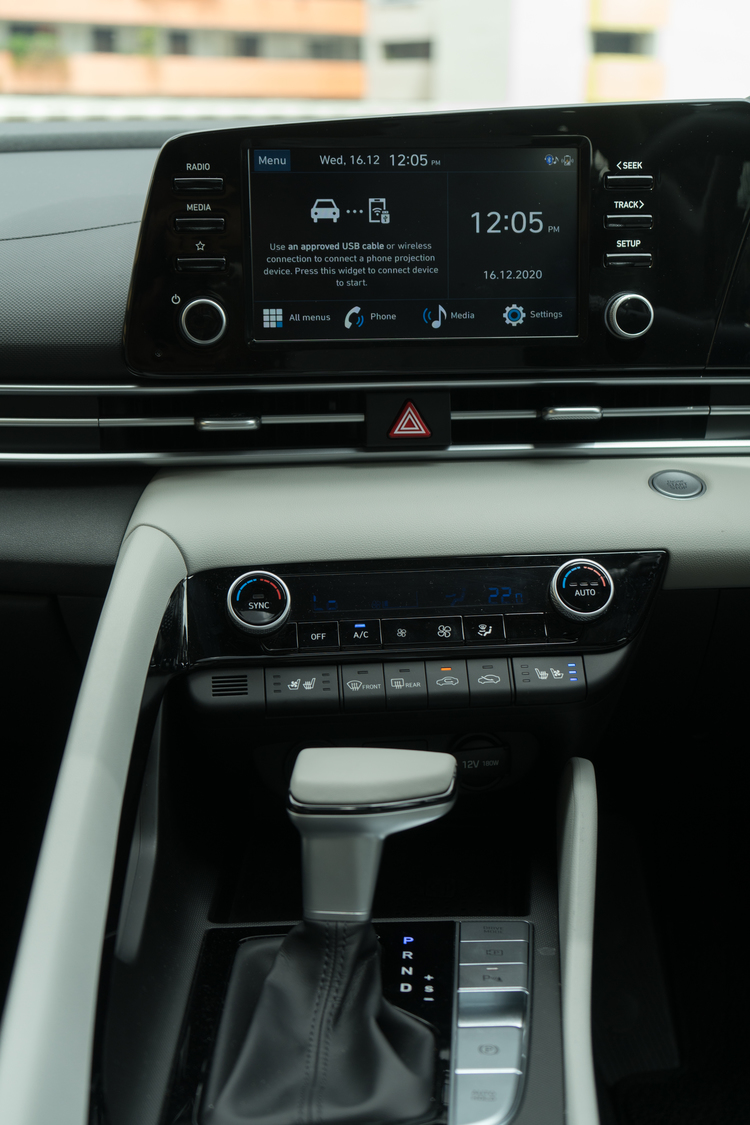 All the infotainment and driving controls are oriented towards the driver, with a large grab handle separating the centre console from the passenger. The upside of this driver-focused interior is that it looks far more premium than it actually costs, and is simply a nice place to be in. 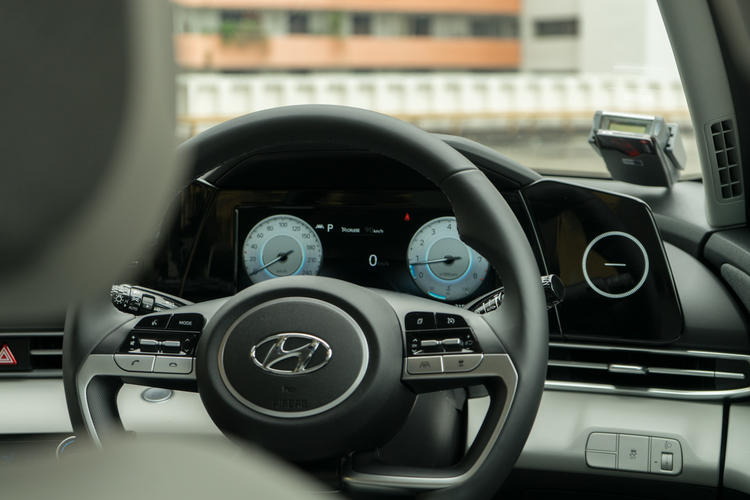 Interestingly, to the right of the steering wheel, there is a blank panel that Hyundai says should be used in the N-Line version (which we won’t be getting here), but since there’s nothing there, it’s just a handy place to mount a phone holder.

Hyundai’s merge with Kia is evident as components such as the switchgear, infotainment system, and even the aforementioned digital gauge cluster is all shared and was seen in the 2021 Kia Sorento that we just recently drove (update coming!). Material quality is pretty decent too for a mass-market vehicle. 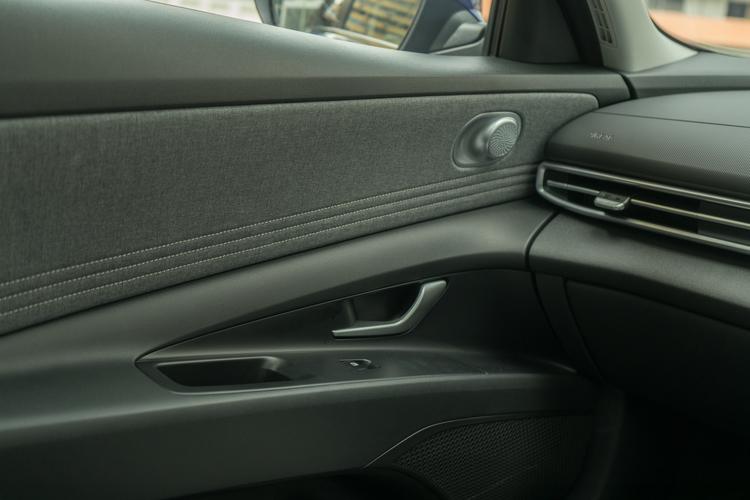 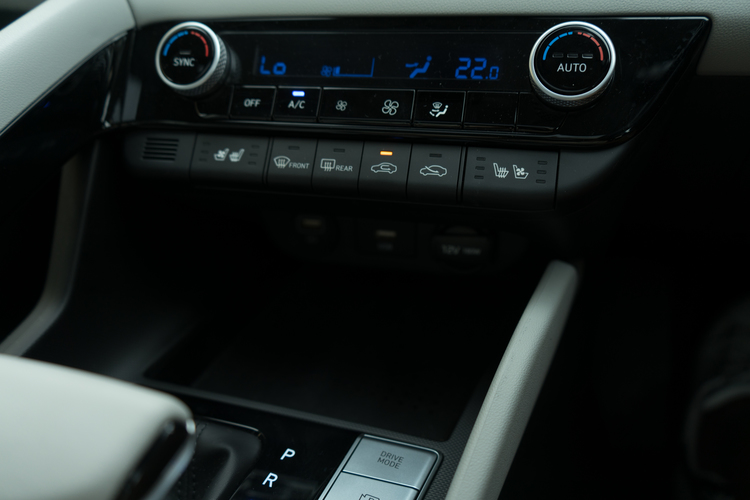 Elsewhere, leather is used on the gear lever, steering wheel, and the seats. The seats, by the way, are once again equipped with the best feature one can have in a car in Singapore, ventilated seats. The front seats are both powered and heated as well, with the driver’s seat getting memory and two-way lumbar support to boot. And get this, even the rear seats are heated.

The ‘Elite’ model also gets an electric sunroof which is a nice addition to have in a car of this segment and will definitely be a draw with your kids that’ll go “wa got sunroof leh”.

They’ll also be well entertained since once their iPads or iPhones run out of battery, they’ll have no shortage of USB ports to charge it back up from. 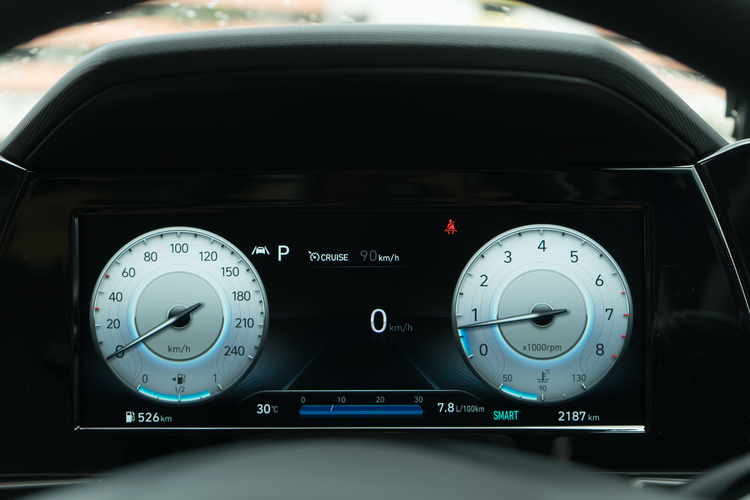 In terms of tech that’s already in the car, the Avante once again shares the same Advanced Driver Assistance System (ADAS) that was found in the new Kia Sorento.

As such it gets all the goodies like Forward Collision Avoidance, Lane Keeping Assist, Lane Departure Warning, Lane Following Assist, Driver’s Attention Warning etc. Do note though, that these features while standard equipment, are only available on the ‘S’ and ‘Elite’ models, the ‘Auto’ doesn’t get them. The ‘Elite’ trim level also gets the addition of Smart Cruise Control that works even in stop-and-go traffic. 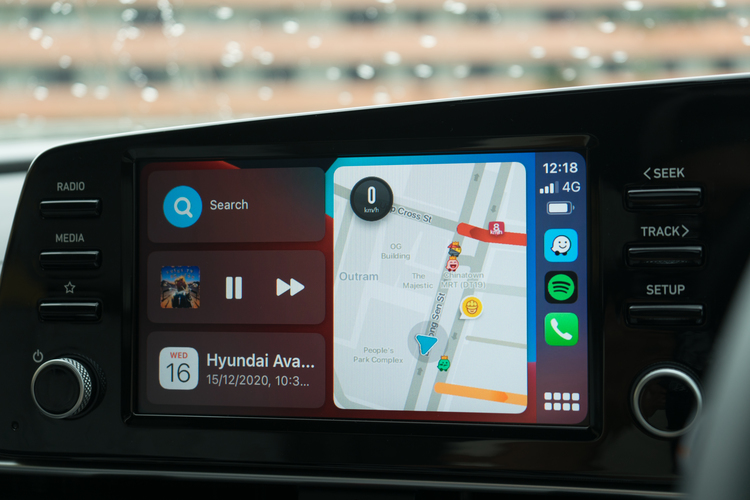 Not surprisingly for a car at this price point, there is no 360° camera, but there is a rearview camera with dynamic guidance lines. You also get wireless charging, and as mentioned above, Apple CarPlay and Android Auto are also wireless, a first in the segment.

We were surprised to see that there is no auto start-stop feature on the car. Though the feature exists almost purely to be turned off immediately, it is interesting to see that in this modern age of emissions regulations that a mass market vehicle such as this doesn’t come with it.

Hyundai has made strong claims about how this new Avante is now a sports sedan with focus put on the driving dynamics of the vehicle. Sports sedan might be a bit of a stretch but it is by no means bad to drive.

Though the Avante uses what’s basically a CVT gearbox, Hyundai has worked some magic to make it drive as though it’s a traditional automatic instead. There is no constant CVT drone and it doesn't feel like gears are being dragged for ages and ages.

Do not be mistaken, the Avante is not a sports car, so don’t buy one expecting to be pushed back into your seat from g-forces. 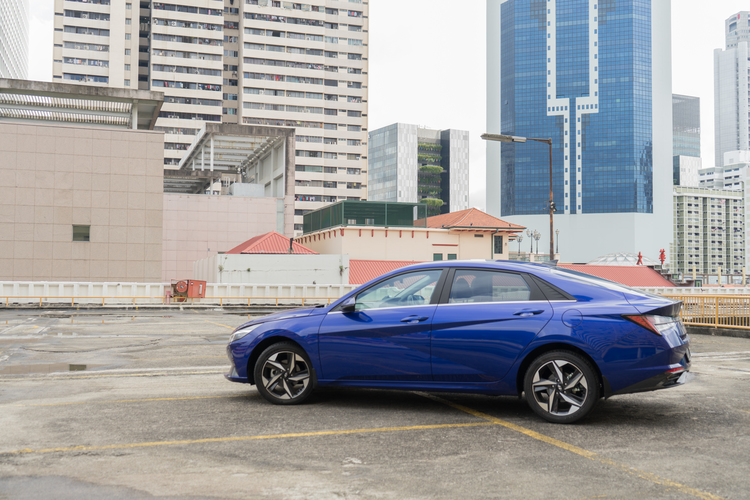 It is, however, a very capable vehicle in its own right. The 1.6 naturally aspirated four-cylinder cranks out enough juice to get you to 100km/h in 10.4s, a 1.2s improvement over the previous generation.

It’ll go on to an advertised top speed of 195km/h too but if you manage to do that, you probably have more confidence than sense. Even at speeds 20 – 30km/h over the speed limit, it does feel like you’re asking a little more of the car than it is comfortable to give.

It stops well though. Gone are the days of questionable braking in cheap cars. The brakes in this were probably the most impressive aspect of the driving experience.

They provided excellent feel and easy modulation with a good bite. A much-preferred sensation to some other cars that feel overly boosted. This means the Avante boasts the best braking performance in its class, with a braking distance from 100km/h of just 43.6m, beating out the Toyota Corolla and Honda Civic. 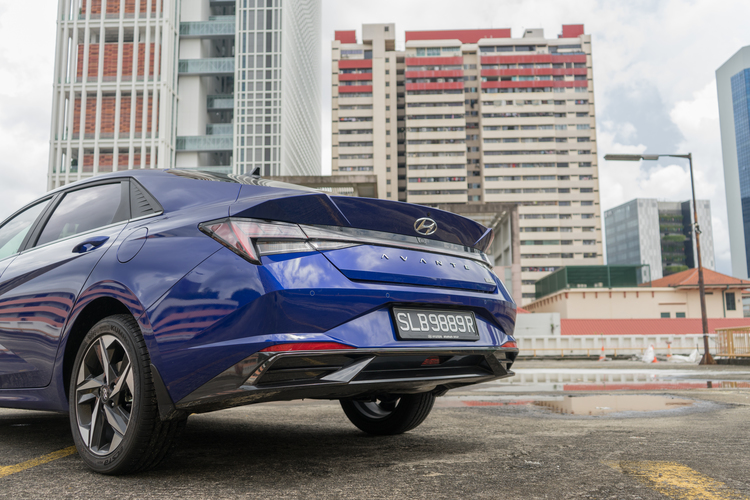 The Avante’s suspension is soft, supple, and well sorted. It rides beautifully over our roads and even when the going gets twisty, the suspension provides good cornering stability and grip. Body roll is well handled and the car is far from floaty. You get a good feel through the steering too and the car responds well to driver inputs.

One thing that has to be mentioned though is that this car beeps at you... a lot. Thanks to all that tech and safety features we talked about earlier, the car is constantly monitoring what you’re doing and as such will beep at you when it’s not happy with what you’re doing.

Start to stray from your lane or make a lane change without signalling? Beep! Car in front of you moves off from a standstill? Beep! Yes, we understand those are safety features and they do work well, but it can get a little annoying at times.

You’ll hear every last one of those beeps too because the inside of the Avante is extremely quiet. You could very well tune out the outside world with its best in class noise isolation. If you haven’t already noticed, this whole “best in class” business seems to be a recurring theme with this new offering from the Koreans. 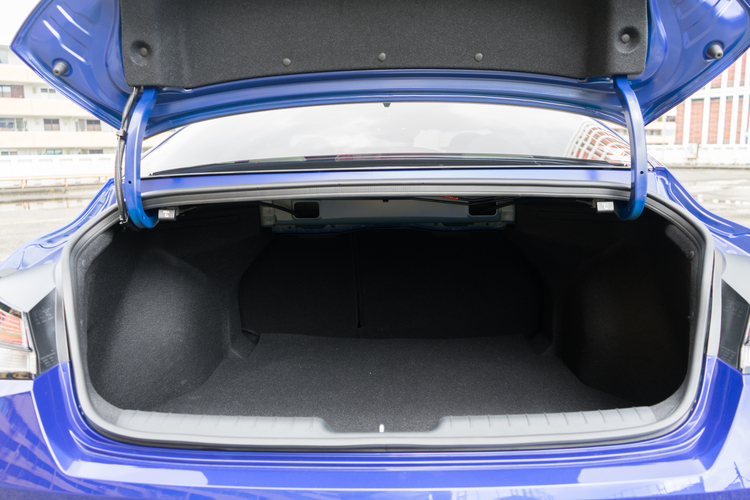 Korean cars in past years could be a little iffy in some places, and some still are, but that’s no longer the case in the, uh, case of the 2021 Avante.

It’s got all the things you expect from a daily driver like good boot space, excellent fuel economy, a well-equipped and comfortable interior, and a pleasant drive. And to top all that off, Hyundai has thrown in modern and previously premium features from ventilated seats to wireless CarPlay to all the fancy safety tech. 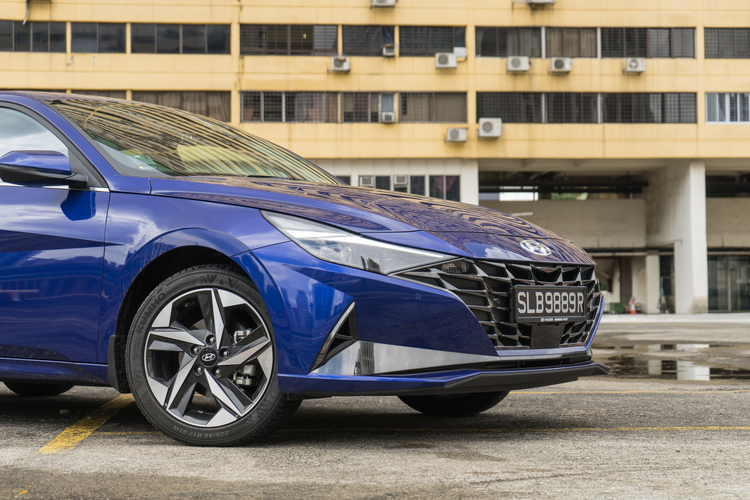 And they’ve managed to package all of that in a mass-market, entry-level sedan. Even for the ‘Elite’ trim level with all the goodies (which is the one you want), prices start at just S$100,999.

For comparison, the base model Honda Civic and Toyota Corolla are already S$99,999 and S$99,888 respectively. Basically, the Avante is a solid value choice and a proper competitor in the segment.

Though the 2021 Hyundai Avante might still yet fall victim to the PHV army, it’s a far cry from the uncle-mobile it once was.

Hyundai has thrust itself into the fray, firmly establishing itself as a legitimate competitor in the segment. The new styling, decent handling and performance, and highly impressive interior mean that even though this might still have NPC energy, we’d still steal one if it were a car in Grand Theft Auto.