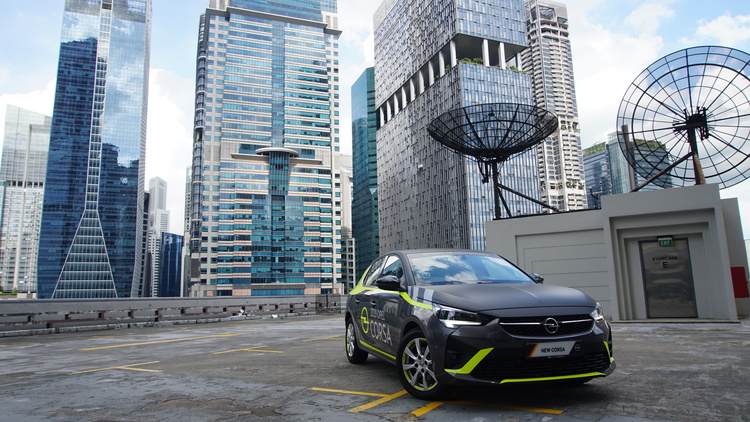 The Opel Corsa may not be a full-fledged hot hatch, but it does make zipping around the city feel like you're in the arcade playing "Crazy Taxi"!

If you're a young aspiring executive, chances are that you'll be looking for a small hatchback to shuttle yourself and the occasional passenger around. You'd probably want something Continental to keep up appearances, but cars like the VW Golf or Audi A3 are more suited to be family hatchbacks than a personal ride. 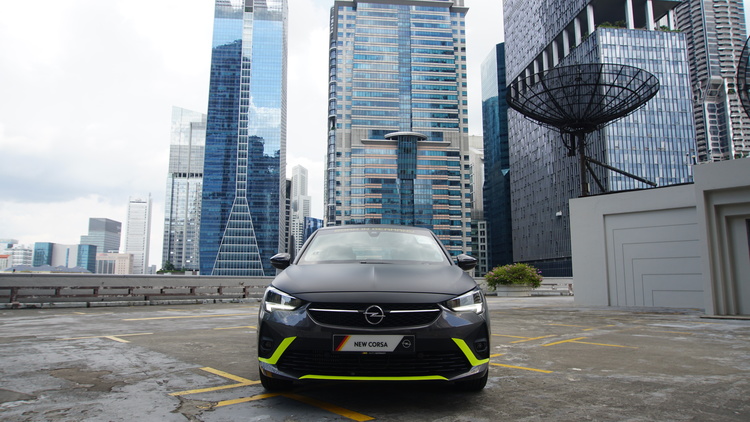 Yes, we know that Opel is a lesser-known brand in Singapore (we mostly see them on the roads as private hire cars), but the German marque actually provides a well-propositioned subcompact hatchback for its price (S$95,500).


Sporting a whole new look that has undoubtably been influenced by its new French parent company, PSA, the 2020 Corsa no longer looks like a soonhock fish, unlike its predecessor. 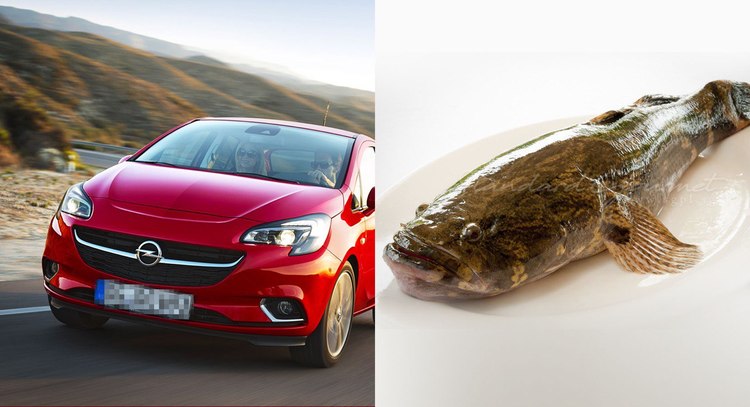 One is a previous-generation Corsa, the other is a soonhock. But we just can't tell them apart
(Photo Credit: Autoevolution, Standard Cold Storage)

So small, can meh?

Despite being a subcompact hatch, the 2020 Opel Corsa is far more practical than its predecessor, and this is evidenced by it being available solely in 5-door configuration. The Corsa also boasts 309 litres of boot space, which is impressive considering its size.

Speaking of practicality, let's take a closer look the myriad of features that the new Corsa packs:

Up front, you get a massive 10" HD touchscreen infotainment display that is capable of supporting Android Auto and Apple CarPlay (although wireless CarPlay is not available). 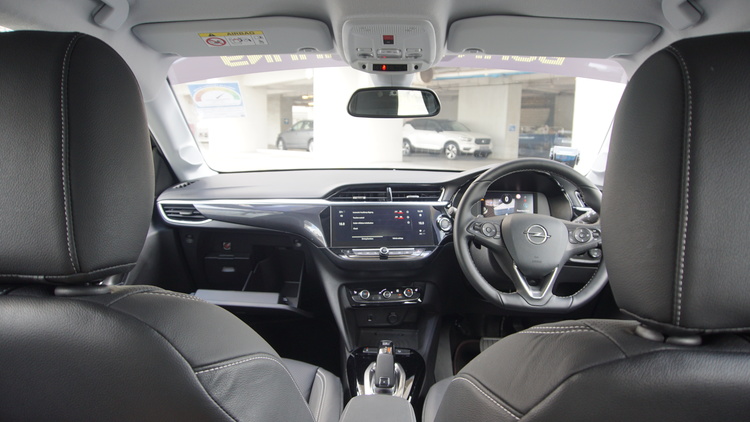 The infotainment system also supports a native navigation system that is fantastic to use--it is fully integrated into the into the 7" digital display cluster, which shows you exactly which route to take and where to exit when you have a destination set. 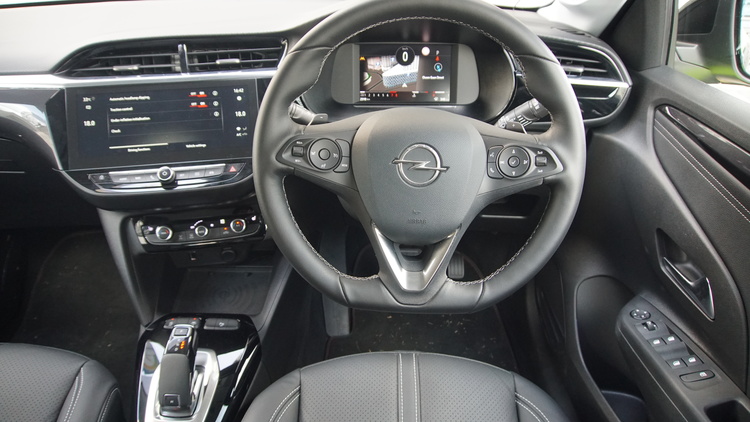 The Corsa also has Traffic Sign Recognition functionality, which came in especially handy for such a zippy car in reminding us of the speed limits. This functionality is part of a safety package that also includes Lane Departure Warning with Active Lane Keep Assist, Forward Collision Alert, and Pedestrian Detection.

Apart from that, you also get all-round parking sensors, a 180-degree bird's eye view reverse camera, and LED headlights. 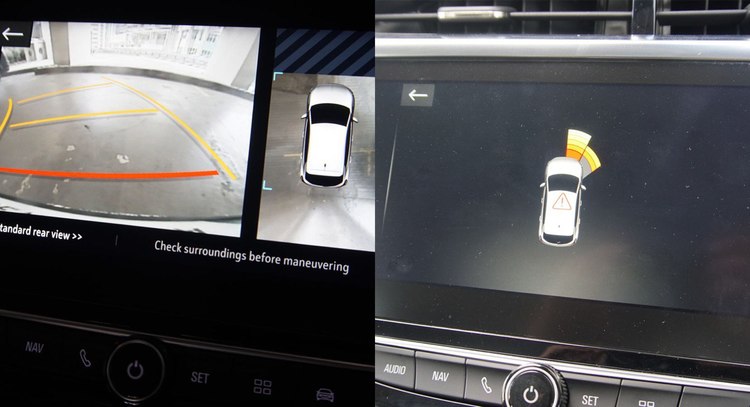 The centre console features a wireless charging pad, an electric parking brake lever, and an electronic shifter. If the shifter looks familiar to you, that's because we've also seen it before in the DS7 Crossback. 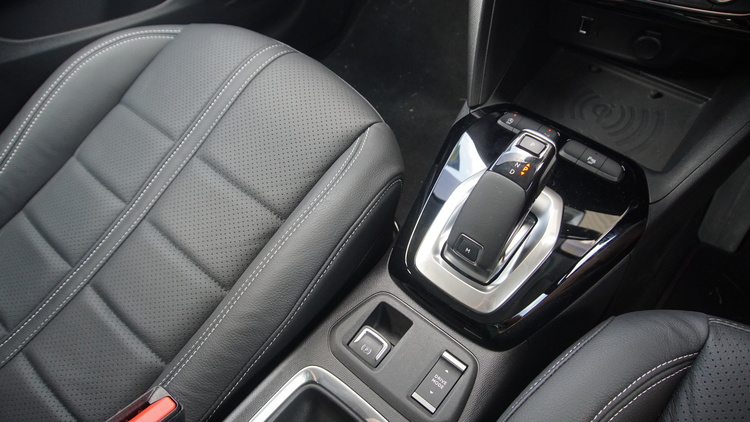 Having new French owners means that Opel has ditched its last-generation GM parts and technology for newer PSA components with a bit more French style.

In fact, the 2020 Opel Corsa is built on the same CMP scalable architecture that the Peugeot 208 and DS3 Crossback uses as well! This new platform means that the 2020 Corsa is longer and wider than its predecessor by 39mm and 19mm respectively, yet weighs less than before.

Not bad, but what's the catch? 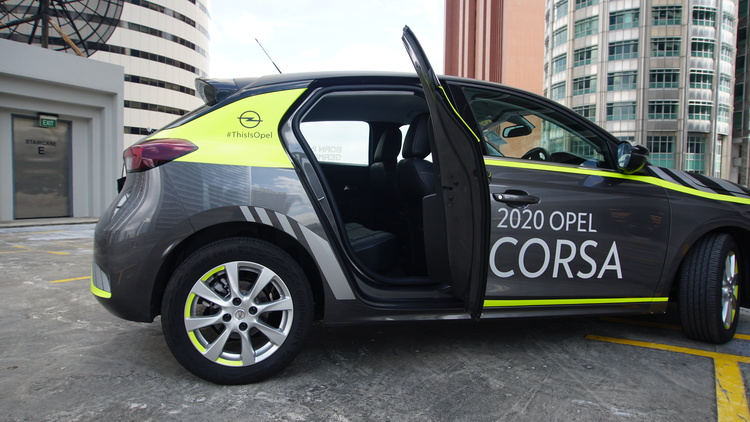 We've got a truly big complaint with the 2020 Opel Corsa.

Despite the 2020 Opel Corsa being fully feature-packed, it cannot escape from the fact that it is a subcompact hatchback. This means that the rear passenger seats are best reserved for children or for short trips, and entry and egress from the second row is challenging given the narrow door openings.

But that's not the major complaint we have--afterall, the rear seats are well-bolstered, and there is even a pair of USB ports for rear passengers to charge their devices. 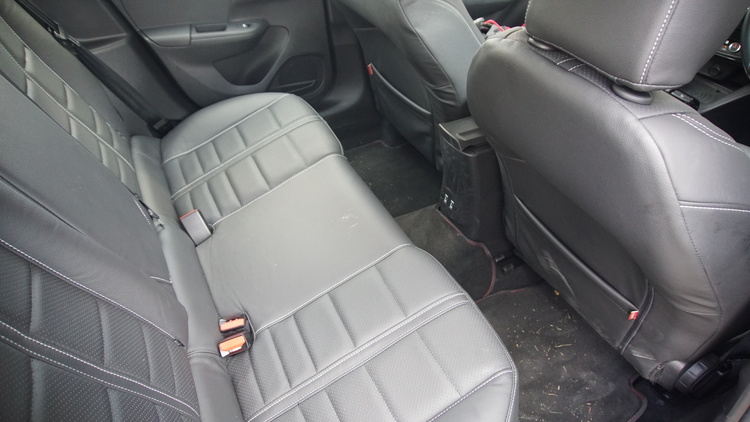 The major gripe that has drawn our ire is that although cost-cutting methods are common throughout the automotive industry, Opel chose to scrimp on touchpoints that the driver will encounter everyday, to the point that the Corsa sometimes feels like a cheaply-made 2000s-era Korean car, rather than the premium-like hatchback it was meant to be. 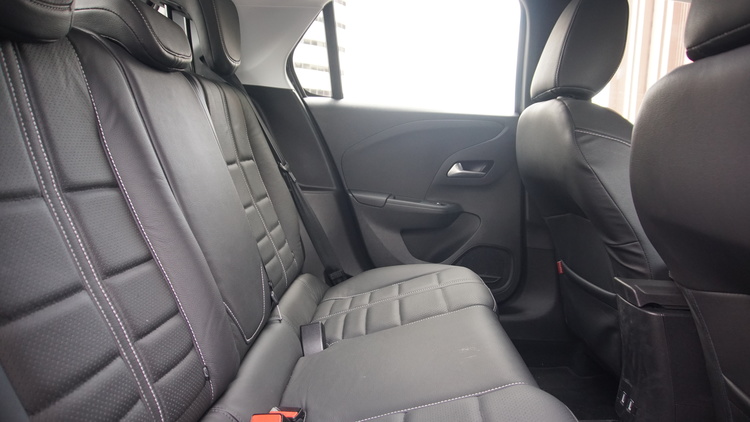 In the rear, the lack of space and hard plastics on the door cards make the Corsa feel cheap. The story doesn't get all that much better up front either, as hard plastics are used even for the front door cards. At least VAG products leave soft-touch materials up front even when they omit them for the second row.

Additionally, the car only has a single-zone climate control system, although we're willing to look past that, since such a small car doesn't quite require a dual-zone system. 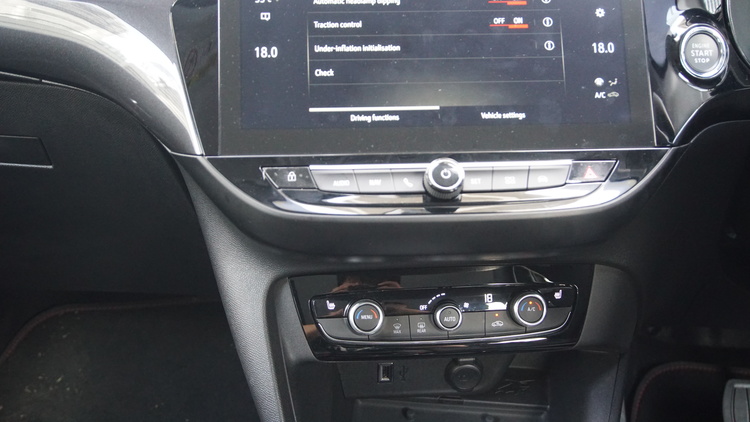 Another issue we have is that Opel have chosen to not equip the 2020 Corsa with an auto-hold system, despite already giving it an electronic parking brake system.

Furthermore, the keyless entry system can only be activated through a sole touch-sensitive pad on the driver's side door, unlike other brands that provide the functionality for at least both front doors. We also found the touch-sensitive pad to be unresponsive on too many occasions, requiring multiple taps before the car finally registered that it should unlock the doors.

The cost-cutting is not only manifested in the excessive usage of hard plastics and the inferior keyless entry system, but also in the digital dash, which has such a large bezel surrounding it that one is immediately aware that the car was designed with an analog display, and that the digital display was tacked on as an afterthought. 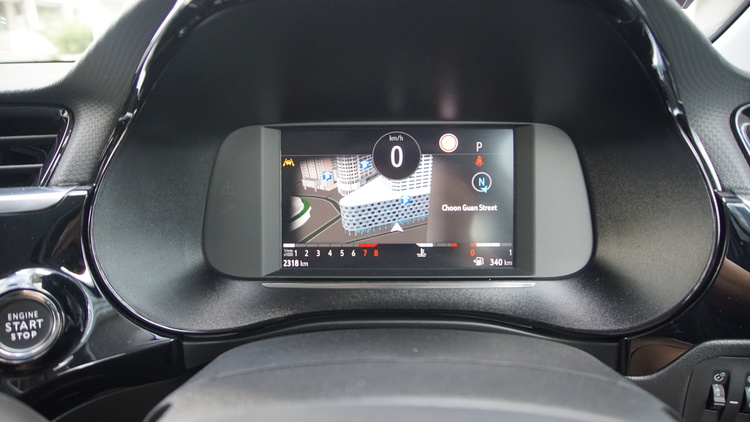 All these complaints are minor in themselves, but compounded together, they make one wonder why Opel chose to stuff the 2020 Corsa with so many features, yet cheap out at the very last minute in very obvious ways.


Perhaps Opel can take a leaf from Nissan's pages to learn how cut costs while still making interiors with premium-feeling touchpoints, as in the case of the Nissan Kicks E-Power.

Mind you, we're not putting down the Opel Corsa just yet: it still stands that this subcompact is feature-packed, and despite the obvious cost-cutting, the cabin is very solidly built--better, we dare say, than your typical Seat or Skoda! 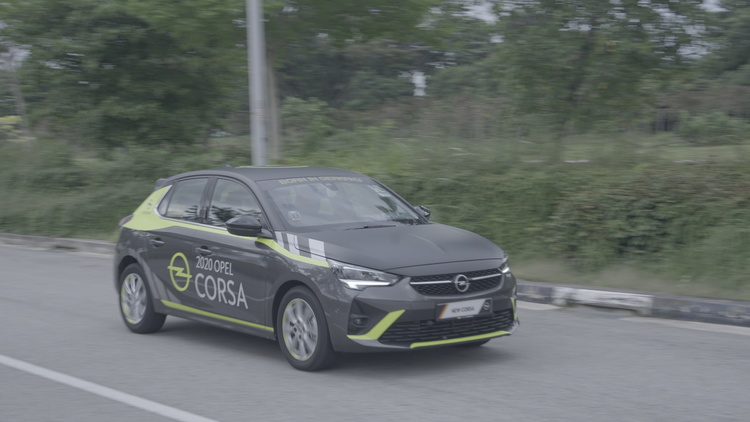 The first thing you notice upon driving the 2020 Opel Corsa is how zippy the steering setup makes the car feel. With just 2.75 turns lock-to-lock, the Corsa is extremely manoeuvrable in traffic.

It certainly helps that the steering is extremely light as well. In fact, you can turn the wheel with just your little finger! The light and quick steering rack means you trade off a lot of steering feedback and resistance, but road feel is still good nonetheless, with enough coming through the steering wheel to tell you what's going on between the tyres and the road for you to dare to hoon the car about. The suspension of the 2020 Corsa is tuned towards the hard side, but it isn't crashy, which helps to contribute to that solid feel that is typical of teutonic cars. This also contributes to the sporty driving feel of the car, but not at the expense of ride comfort.

With a confident suspension feel and an agile steering set-up, the Corsa zips itself through closing gaps in traffic more nimbly than you'd expect. Opel has also elected to give us the 2020 Corsa with the most powerful tune of its 1.2 litre turbocharged 3-cylinder, with 128hp and 230nm of torque on tap, propelling the car from 0-100km/h in a rather brisk 8.7 seconds. 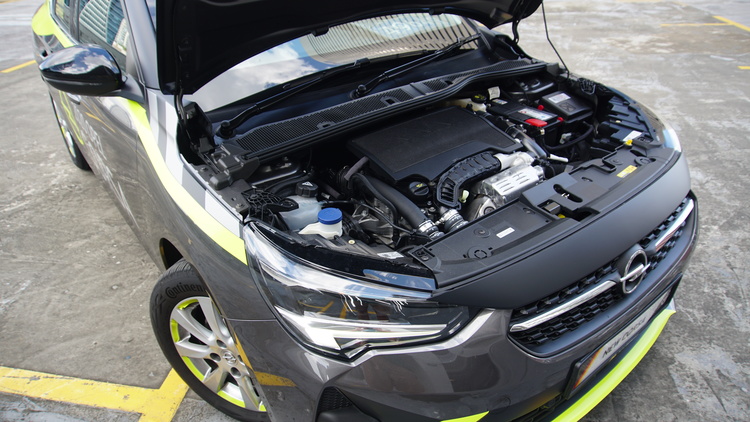 The brakes on the Corsa are also excellent, providing very impressive stopping power, with an extremely progressive modulation as well.

All these attributes make the Corsa feel much faster than what might be suggested on paper, and truly encourages you to make unleash the inner hooligan in you to dart about city traffic as though you were playing a game of "Crazy Taxi" in the arcade. 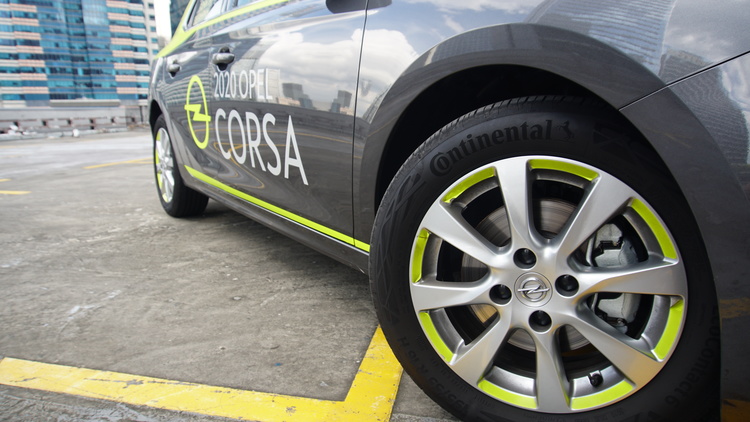 However, do not expect to be rewarded if you really want to drive the car up to its limits.

When in sports mode, the steering and throttle response feel exactly the same as in normal mode, with the steering the light and lacking in feedback. What you do get, however, is a very convincing exhaust note artificially piped in through the speakers, which does give you the aural experience of driving a hot hatch.

Although the Corsa is good fun for darting around the city and for quick bursts of acceleration, the dynamics of the car begin to fall apart when it is pushed to the limit.

For example, despite lulling you into a false sense of security about the car's ability to handle corners with its quick steering and taut suspension, the Corsa slides into a sudden understeer when pushed beyond sensible speeds, making you very likely to crash straight into the tree at the apex of the bend than actually making it round the bend. When changing direction, the car also pitches around more than one would expect from its taut suspension.

A hot hatch this car may not be, but regardless, the Corsa is still more fun than one would expect on the roads--one simply has to temper their expectations and not treat it like a full-blown hot hatch that's capable of track day driving.

Think of it not as a performance hatchback, but as a surprisingly fun everyday car that performs better than it needs to, and you'd be in the right mindset to pilot the 2020 Opel Corsa. 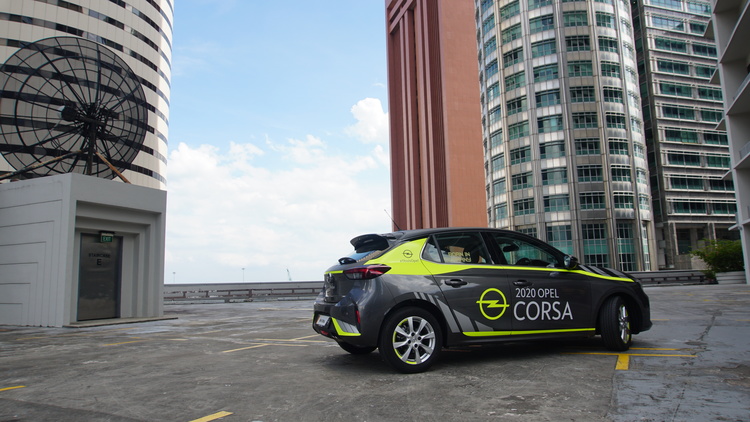 Here we find the beauty of the 2020 Opel Corsa. With an abundance of features packed into this subcompact, and zippy handling with more than enough power and torque for you to dart through traffic jams, the new Opel Corsa adds a lot more colour into your daily drive.

Despite the excessive use of hard plastics, the Corsa's build quality is extremely solid, and its engine is so refined that one could be forgiven for thinking it isn't a 3-cylinder.

The 2020 Opel Corsa is a solid little German car that can be best described as being like an eager puppy, just rearing to be unleashed so it can hop around from point to point.

Yes, this car does have an obvious flaw in the way costs have been cut on it, but we think that it has a bit of personality that more than makes up for it. 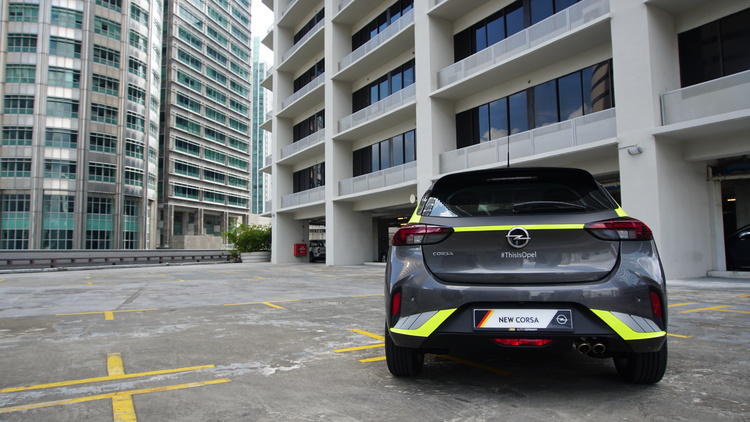 Factor in the price deficit of this car over other German rivals, and this is one zippy warm hatch to consider if you're in the market for a subcompact hatch.

With its features, driving fun, pricing, and that oh-so-important Continental badge, the 2020 Opel Corsa could very well be the young professional's key to the city.

All prices are accurate at the time of writing