Inconsiderate Drivers of the Week: Episode 67 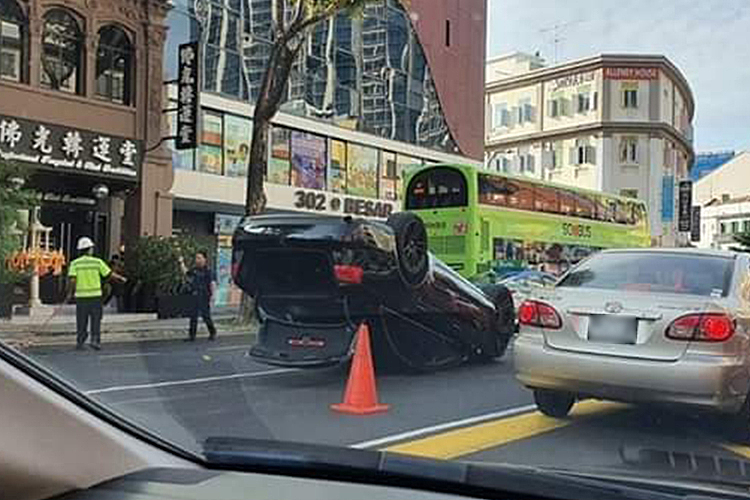 In this episode of Inconsiderate Drivers of the Week, we feature a reckless motorcyclist, indecisive drivers and a car that flipped and "turtled".

We’ve said it before and we’ll say it again: there are lines painted on the road for a reason. Cutting over lines to opposite lanes is a really dangerous act, especially if there’s traffic coming in from the opposite direction. Also, did you know crossing over double white lines is an offense?

The above shows a brown Mercedes coming to a left turn. However, instead of following the arrows on the road and turning left, he slows down proceeds to cross over the double white lines and drives down another road. Good thing the camera car was able to slow down in time too, so that a collision didn’t occur.

2. Toyota Can’t Stick to One Lane

Speaking of lines on the road, which are used to separate the road into lanes, some drivers just can’t stick to one lane. It’s super dangerous to weave in and out of lanes, or even drive in between two lanes. Other motorists behind you won’t know if you’re trying to switch lanes or not, and can end up rear-ending you.

The video above shows a white Toyota driving in front of the camera car, driving over the dotted white lines instead of staying in one designated lane. Eventually he ends up in the rightmost lane but cuts over to the left lane to reach his destination, without even signalling!

Perhaps you could invest in a car with a built-in lane assist system, such as the Toyota Corolla Altis. However, every driver should at least know how to drive straight.


Tunnels are dark, enclosed spaces which can lead to accidents if you drive recklessly inside it. With the walls at the sides, it can be even more difficult when we’re trying to switch lanes or overtake.


The video above shows a Mercedes cutting in front of the camera car before suddenly emergency braking. The camera car driver was alert enough to slow down to avoid a collision, but it was quite reckless on the Mercedes’ part. We don’t know what that driver was doing or if he was not “in the zone”, but we really hope that other drivers won’t behave like that in the future.

We’re sure we’ve all seen motorcycles weave in between traffic to get to the front, especially since their vehicles are so small. However, this act is really dangerous when there’s moving traffic. If you don’t want to know what it’s like to lose control of your car, it’s best you don’t watch this video.

The video above shows a white Hayabusa motorcycle recklessly swerving from the rightmost lane to the camera car’s lane. This takes the camera car driver by surprise and he swerves out of the way, only to lose control of the car and skid. Thankfully, the driver managed to get the car facing the right direction again.

You may have seen this video floating around social media as it was quite a shocking accident.

The camera car is waiting at a red light and we can see the rear view of other vehicles driving up to that red light as well. You can see that most of the vehicles coming in are slowing down.

However, a black Audi appears to be speeding, and ends up hitting the side of a Toyota Sienta. This causes the Audi to flip over and turtle. It’s said in the description of the Facebook post that the driver of the Audi was able to crawl out of the car and refused to be sent to the hospital. We hope he’s doing okay.