Inconsiderate Drivers of the Week: Episode 49 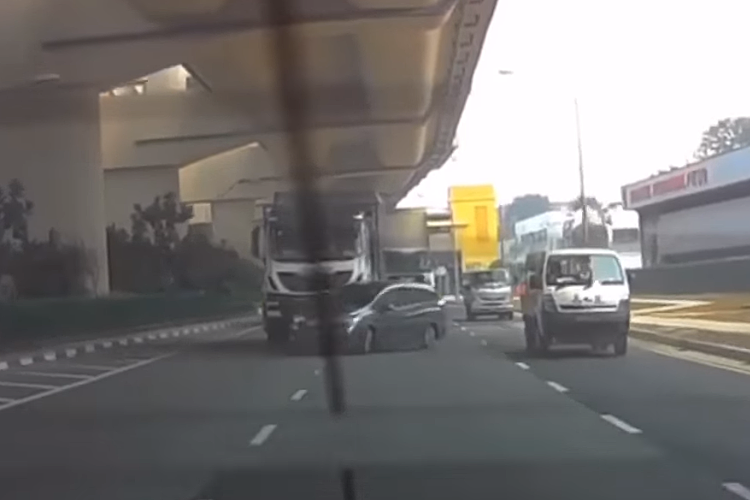 In this episode of Inconsiderate Drivers of the Week, we feature a driver who drove up a pavement, reckless overtaking and the dangers of heavy vehicle blind spots.

1. Camera Car Driver Makes a U-Turn Without Checking Traffic Flow, Gets Into an Accident


There are times when you’re driving along but then realize that you went the wrong way. You see a U-Turn sign up ahead and so, you decide to make a U-Turn. All drivers should know that making a U-Turn is risky, especially when you don’t check to make sure that there is no oncoming traffic.

In the video above, the camera car driver slowly makes a U-Turn, even though there is visible traffic approaching the driver. This results in another vehicle crashing into the back of the camera car, pushing it forward slightly. The crash was very loud and it sounds like somebody got hurt.

It’s very important for truck drivers to constantly check their blind spots, especially when they’re turning or switching lanes. There have been multiple accidents that occurred plainly because a careless truck driver didn’t check his blind spot. That’s why it’s essential to always be alert and make sure the coast is clear before switching lanes.

In the video above, the Honda Shuttle is seen driving alongside a tipper truck, seemingly in the truck’s blind spot. The truck driver doesn’t see the Honda Shuttle and switches lanes, catching the Honda driver by surprise, causing the Honda to lose control and back up onto the kerb. Luckily, no one was seriously injured.

3. PHV Toyota Prius Drives Off-Road, Drives Up the Pavement Instead


Riding in a Private Hire Vehicle (PHV) such as Grab can be a good source of income for drivers, but there are some who are lazy and just want to drop off their passengers as quickly as possible. These drivers then drive carelessly without regard for the other people around them.

In the video above, a PHV Toyota Prius is seen turning a corner. Instead of continuing down the road, the driver turns up and drives up the pavement leading to a fitness corner. This act is extremely careless and illegal. If there were any pedestrians on the roads, they could have been seriously injured.


The double white lines on the road are not meant for drivers to cross. They are meant for vehicles to turn into the correct lane safely, and not to make a last-minute decision to switch to another lane. It is an offence to drive across these lines to switch lanes. Abiding by traffic safety rules is essential so as to not cause accidents on the roads.

In the video above, the camera car is making a right turn. At the same time, the white Porsche drives onto the road. The driver then speeds up, driving over the double white lines in an effort to overtake the vehicle in front, narrowly missing the camera car. The driver of the Porsche has to learn to be less reckless. Luckily, nobody was hurt.


Driving on a single carriageway sometimes can be dangerous because there is no divider along the middle of the road. Some drivers decide that this is a good time to overtake the vehicle in front of them, but this isn’t safe at all.

In the video above, the camera motorbike is driving when suddenly, a Volkswagen Jetta appears beside him, overtaking the driver. Even though a motorcycle is small, it doesn’t give the car driver an excuse to overtake, especially not on a single carriageway. If the Volkswagen’s driver wasn’t careful, an accident could have occurred.