Inconsiderate Drivers of the Week: Episode 60 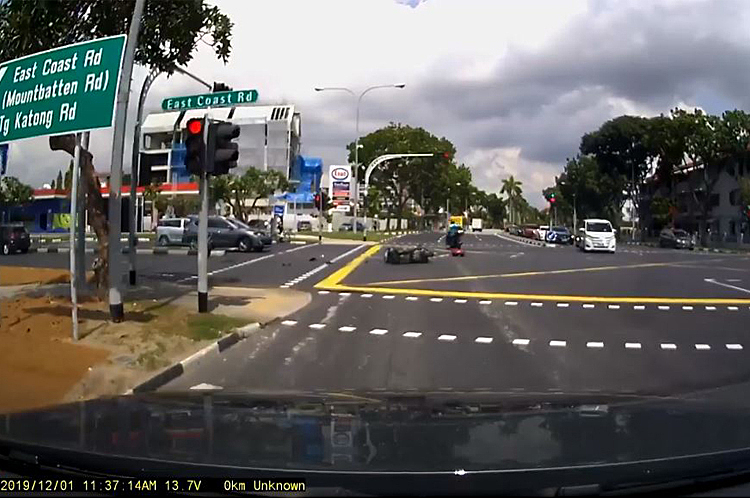 In this episode of Inconsiderate Drivers of the Week, we feature reckless overtaking, failing to give way and a car that drove on a bike lane.


1. PHV Switches Lanes Abruptly and Causes a Collision Behind Him


Every driver would know that switching lanes on a busy road is a really big risk, and can endanger fellow motorists. When switching lanes, drivers should always keep a lookout for oncoming traffic and use their turn signals.

In the video above, the black PHV is blocked by a car in front of the camera car. Around the middle of the video, the PHV makes an appearance by driving out to the left lane, cutting in front of a Volvo. This causes the Volvo to hit the emergency brake in order to avoid colliding with the PHV.

Unfortunately, the sudden brake caused a Toyota Altis behind to rear-end the Volvo. Thank goodness the damage wasn’t major, and there were no injuries.

2. Black SUV Fails to Give Way, Knocks Down Biker


A discretionary right turn is a right turn drivers can perform if the light is green and conditions are safe. However, some drivers think they’re entitled to this right turn and just drive without taking note of any oncoming traffic.

That’s what happened in this video. The action takes place right at the start of the video, where a black SUV turns, ploughing into a motorcyclist, who was riding straight ahead. The biker falls off his vehicle, just as the SUV comes to a stop further ahead.

The driver of the SUV, along with some other people, rushed out to give the biker a hand. We hope he has a speedy recovery!

3. Camera Car Fails to Give Way to Bus

The truth is, no veh­icle can complete an entire journey without turning, which means they have to switch lanes sometimes. Let’s see what happens when a car doesn’t give way to a bus.

The video shows an SBS Transit bus driving alongside the camera car, with its signal turned on to indicate that he’s going to cut into the lane. Despite the signalling, the camera car still doesn’t give way, and instead drives forward, only to narrowly avoid a collision with the bus.

The video has sparked quite some controversy, but whose side are you on? The bus driver’s or the camera car’s? Let us know in the comments below!


With the temperatures dropping in December, there has been a lot more occurrences of rain, which makes the roads slippery and even more dangerous than before. Drivers should be more cautious when driving during rainy weather.

The video above takes place at Tuas Second Link. There was a trailer that broke down on one of the lanes, resulting in a Hyundai Starex and Toyota PMV to get impatient and drive around it recklessly, despite the slippery roads.

The Toyota collides with the back of the camera car, and when the video cuts to the front camera, we see that the Hyundai took down a biker as well. This kind of reckless behaviour by the drivers should not be excused.


If a lane is dedicated to motorcyclists, then cars should not be driving on that lane. It endangers the motorcyclists, and the car would be breaking rules as well.

The video above shows a Hyundai Starex on the causeway, breaking through the barrier and cutting into the motorcycle lane. Near the end of the video, as the motorcycle lane begins to merge with the car lanes, the Hyundai slows down and tries to find a spot where he can cut the queue.