Inconsiderate Drivers of the Week: Episode 59 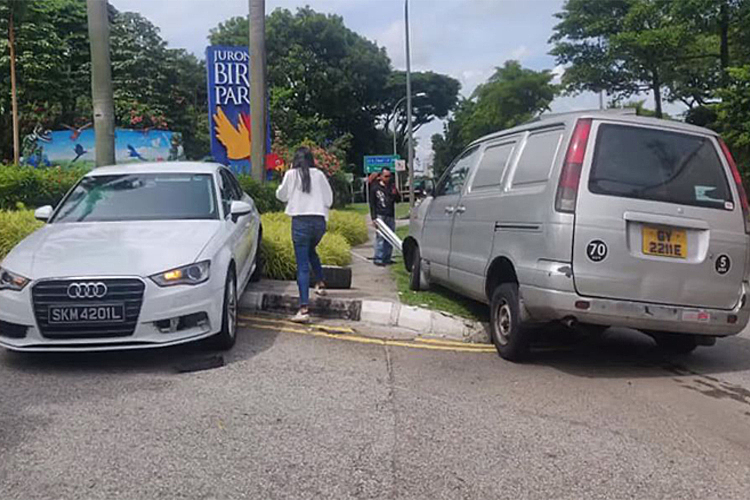 In this episode of Inconsiderate Drivers of the Week, we feature multiple rule breakers, an accident caused by tailgating and a rude encounter.

As drivers, we should always remain vigilant and look out for each other on the roads, and give way to other motorists when they need it. We shouldn’t think we’re better than them and rush forward, as such thinking can lead to accidents.

The video above shows a few vehicles turning into the Newton Circus Roundabout. The car in front of the cam car stops at the front, causing the cam car to stop as well. A few seconds later, a black Toyota C-HR appears out of nowhere, aiming to turn left.

As he turns, traffic from the side begins to flow, and the C-HR refuses to give way, resulting in a collision between it and a silver car. After a while, both cars drive off in the same direction. Hopefully, no one was injured.


Driving against traffic is already a very dangerous offence, and it puts everyone in danger, especially yourself. Many carparks in Singapore are also pretty small, so it can be hard to manoeuvre.

The video above shows the cam car driving along looking for a place to park when it meets a white BMW driving in the opposite direction. Having taken notice of the cam car, the BMW then proceeds to park in the nearest lot, letting the cam car pass.

We don’t know the reason why the BMW was driving in the wrong direction, but we’re relieved no collisions had occurred. Who knows what would’ve happened if there were no empty lots?

3. Toyota Vellfire Driver Cuts Off Camera Car to Scold Him


Some drivers just like to find fault with other motorists, even when there’s no reason to, especially in the case of the above video.

This video shows the cam car driving along, obeying traffic rules. In the rear camera, the Vellfire is seen driving behind. They both slow down as they approach a red light.

Once the light turns green, the cam car switches lanes in order to make an upcoming left turn, but the Vellfire speeds up and overtakes the cam car, cutting him off. The driver then proceeds to exit the Vellfire and approach the cam car driver, pointing fingers and scolding. Unfortunately, there is no audio in this video, so we don’t know what the ruckus was about.


According to the Basic Theory Test handbook, a safe following distance when driving is about one car length for every 16 km/h of your speed.


Example, if you’re travelling at 48 km/h, you should leave about three car lengths between you and the car in front. Anything less can be considered as tailgating.

Pay attention to the furthest lane in the above video. What looks like a black car is tailgating an SMRT taxi. The taxi slows down due to a car in front, but the black car doesn’t take notice and ends up rear-ending the taxi, causing it to lose control.

The taxi driver swerves the vehicle away from the car in front, crashing into the road shoulder before accelerating and bumping into a white car. We really hope the taxi driver is okay.

5. Audi Turns in from Outer Lane, Gets Hit by Toyota Lite Ace


Even if the outer lane has a turn arrow painted on it, drivers still have to look out for those turning or driving straight from the inner lane before making the turn. We shouldn’t take it for granted that just because we follow the arrows, we’ll be safe.

You may have seen this Jurong Bird Park incident circulating around social media, but only in pictures. Now, someone has shared their dashcam footage of the accident. In the video attached, everything takes place on the right-hand-side of the camera.

A white Audi is seen turning in when a silver Toyota Lite Ace collides with the back of the Audi, causing it to jump and land on the curb. The Toyota takes down a signage and we can see that the hood is smoking. Kudos to the passers-by that went up to help!

Pictures at the end of the video show the extent of the damage, with the Toyota receiving most of it. The front of it is completely wrecked; we hope the driver is alright. It was also mentioned in SGRV’s post that the Audi had an elderly and 4-year old child inside. We hope that they’re okay as well.

Did you know we have a Motorist Telegram Channel ? Created exclusively for drivers and car owners in Singapore, you can get instant info about our latest promotions, articles, tips & hacks, or simply chat with the Motorist Team and fellow drivers