Inconsiderate Drivers of the Week: Episode 57 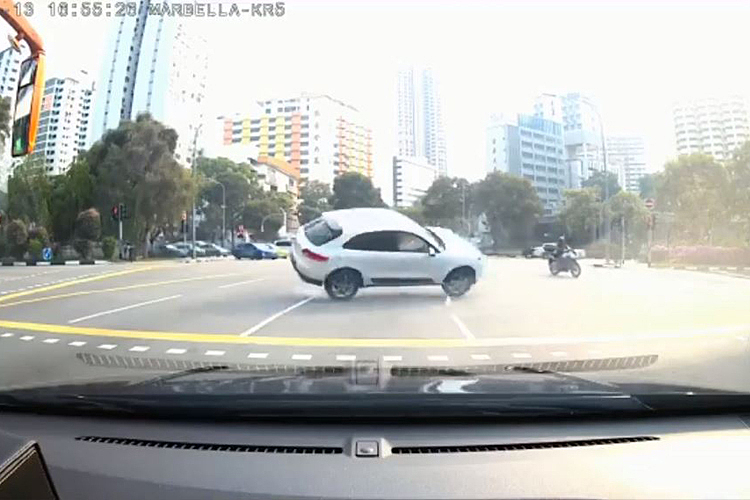 In this episode of Inconsiderate Drivers of the Week, we feature multiple serious collisions, a daydreaming driver and the risk of driving in rainy weather.

You’ve probably noticed the arrows on the road, whether or not you’re a driver. And of course, these arrows wouldn’t be painted on if they didn’t have a meaning. If you see a straight arrow, you drive straight. But that’s not what this driver did.


In this video, a silver Toyota is in the lane where the arrow is straight. Instead of following the arrow, he cuts the queue and turns right before abruptly stopping. This causes the blue van behind him to e-brake before driving around him.

Thankfully, the blue van and camera car managed to stay alert and avoid the Toyota, if not something bad could’ve happened. Was the Toyota driver sleepy or daydreaming?

Junctions are notorious for having many accidents occur, and the above video is one of them. To all drivers out there, please be safe when turning at junctions. Many accidents have occurred due to drivers not checking the perpendicular lanes.


In this video, a white Porsche is making a turn when a black Volvo speeds out of nowhere, colliding into the Porsche. The white car then turns a full 360 degrees, almost flipping over, before crashing into the camera car.

As the Porsche stops, you can see that its door is badly dented inward from the impact. The Volvo also suffered some damage to the front.

Another accident occurring at a road junction, this time with a car running a red light. Many drivers still like to run red lights, despite the number of accidents that have been caused because of that.


This video shows the camera car driving up to a junction, going straight, when suddenly a gold car appears from the right side, aiming to beat the red light, which has been red for quite a while. The impact looks like it was really hard, but its unclear the extent of the damage.

In the description of this video on SGRV’s Facebook Page, it’s said that the gold car drove away after the collision, qualifying this as a hit-and-run.


There are times when you realize you drove the wrong way and need to make a U-turn. The logical thing would be to wait for the coast to be clear before you drive off, right? Turns out the driver above would rather just cut through the flow of traffic instead.

The video above shows a red car which has stopped after partially making the U-turn, waiting for the traffic to die down before completing the turn. This makes any oncoming traffic have to stop and wait for the red car to make his turn.

The car then continues the turn, aiming to turn into the lane where the road splits, but ends up colliding with a biker going in that same direction. In this case, the biker was not at fault and the driver of the red care was actually really reckless.

Driving on sunny days is dangerous as it is, but driving on rainy days just escalates the risk of danger. With the rain pattering on your windows, it can be hard to look out for oncoming vehicles, and your blind spots are even harder to check.


The video above shows a Toyota Altis making a right turn, but then a tipper truck approaches from the perpendicular direction and collides with the Altis, pushing it forward. The impact looks pretty hard, with the Altis tilting slightly as the truck pushes it.

We hope that neither driver is injured, and that they’ll pay more attention to the roads during rainy weather. Read this article to find out how you can stay safe in the rain.