Inconsiderate Drivers of the Week: Episode 56 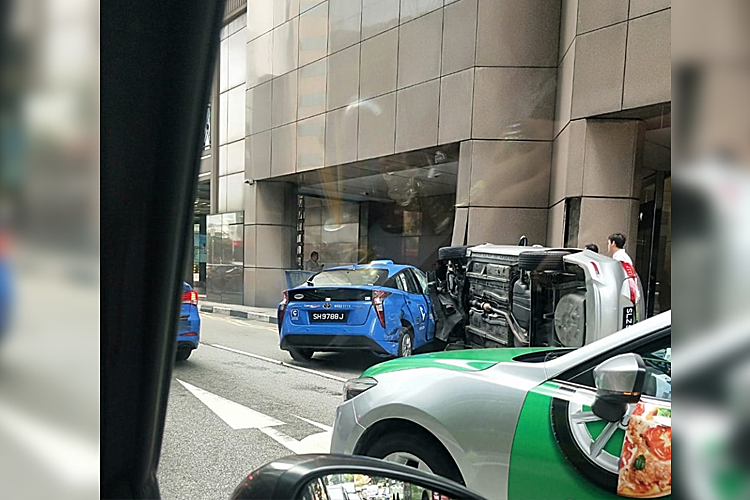 In this episode of Inconsiderate Drivers of the Week, we feature reckless taxi drivers, a massive collision and the dangers of not securing loads.

1. Kia Cerato Drives Up the Kerb

As pedestrians, we shouldn’t take it for granted that drivers will always stick to the roads. As drivers, we shouldn’t assume that pedestrians are safe just because they're standing on the pavement. We hate to admit it, but everyone is at risk of danger at all times.

In this video, we see a red Kia approaching a traffic light when suddenly he drives up the kerb. The left side of the car goes over the kerb, narrowly missing a pedestrian who was standing there. Luckily, the pedestrian stepped back quickly, while the Kia reverted back to the lane and drove away.

2. White Mazda Doesn’t Give Way to Honda Phantom, Causes Collision then Runs Away


If you are about to make a turn and you see a vehicle speeding towards you, the smart decision would be to slow down and give way to the vehicle. Although, some drivers are impatient and think they can make the turn before the vehicle passes them.

What does it end up leading to? A collision.

In the above video, around the 0:40 second mark, we see a white Mazda waiting to make a right turn. The upcoming Honda Phantom is blocked from the camera car’s view.

It’s unclear if the Mazda stopped at some point, but if he didn’t, this would qualify as a hit-and-run.


To all drivers who carry around goods for work or for personal reasons, please secure your load! If anything drops off your vehicle, it will pose as a danger to other motorists, and you lose part of your load.

In this video, the camera car drives past a Toyota Dyna, which has a number of bags in the back. There is nothing securing the load – at least, none that we can see.

When it switches to the rear camera, we can see a black bag fall off the truck and onto the road. Good thing that the motorists behind were able to stop in time to avoid the bag.


Once again, another almost-accident caused by a driver who tried to beat a red light. Running a red light is already very dangerous, but making a turn during a red light is even worse. This kind of reckless behaviour causes danger to many motorists, as well as yourself.

In the above video, right off the bat we see the taxi make a right turn at the last minute, causing the camera car to hit the emergency brake to avoid colliding with the taxi. The sudden stop causes the vehicle behind to hit the camera car, rear-ending it.


You may have seen this incident all over the internet yesterday, as it pretty much went viral. The news of this accident was spread everywhere – Facebook, Telegram; even The Straits Times wrote about it.

The video above is security camera footage showing how the accident played out. The taxi proceeded to switch lanes, colliding with the Toyota Altis, pinning him to the kerb. The taxi then drags the silver Toyota along the kerb before swerving and hitting the side of the building.

Both cars came to a stop, with the silver Toyota lying on its side. The damage to both vehicles was serious, but injuries for both drivers were not severe.

We hope that the drivers will recover quickly and safely.

Did you know we have a Motorist Telegram Channel ? Created exclusively for drivers and car owners in Singapore, you can get instant info about our latest promotions, articles, tips & hacks, or simply chat with the Motorist Team and fellow drivers!