Inconsiderate Drivers of the Week: Episode 55 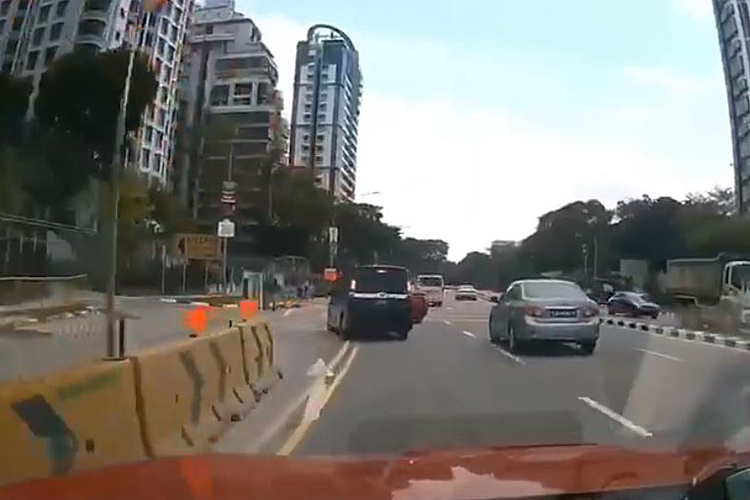 In this episode of Inconsiderate Drivers of the Week, we feature multiple collisions and a taxi driver that was desperate for passengers.

Road junctions are actually one of the places where most accidents occur, aside from the expressway. So many of these accidents are caused by drivers beating red lights, which ends up in a collision with another vehicle from the perpendicular lane.

A good example is the video above. Around the 0:25 second mark, the camera car begins driving forward as the light has turned green. A white car beside it drives forward as well.

Then, a grey sedan appears from the left, speeding across the junction, barely missing the white car. Luckily, the white car passed by before an accident could have occurred.

2. Toyota Hiace Cuts Over Chevron, Gets Rear-ended by Truck


Chevron markings are a series of arrows that are used to channel traffic. It is illegal to drive or park inside them, except for emergencies. So if you just cut across a chevron so you can switch lanes faster, that’s an offence and a danger to other motorists.

In this video, a white Toyota Hiace is seen cutting over the chevron into the next lane, causing a truck to apply its emergency brakes. Despite this, it still rear-ended the Hiace, which drives forward to a stop.

As the camera car approaches the Hiace, you can see that there is a dent in the back of the Hiace, which shows that the impact was pretty hard.

On a side note, the camera car driver has really good reflexes and stopped in time, if not this could’ve resulted in a chain collision.

3. Taxi Cuts Across Two Lanes to Pick Up a Passenger


As established in previous episodes of Inconsiderate Drivers, we know that random lane switching is super dangerous. The example above is probably one of the most dangerous ones we have ever seen.

In the video, there is a red TransCab taxi on the rightmost lane. It slowly overtakes the grey car beside it, but then swerves quickly in front of a black car in order to reach the pavement.

This quick act of danger causes the black car to swerve out the way, nearly colliding into a pedestrian. Good thing that both the driver of the black car and the pedestrian have quick reflexes.

On the other hand, if you need to hail a taxi, maybe hail one that’s on the lane next to the pedestrian walkway? It’s not worth causing danger to other motorists just to get a cab.

At a junction, if one lanes’s traffic lights are green, obviously the perpendicular lanes’ traffic light is going to be red. So why do so many drivers still dash across the junction when there’s incoming traffic from the side?

In this video, the camera car is driving forwards during a green light, and some distance in front of the cam car is a motorbike. As the bike drives forward, a black MPV comes out of nowhere and collides with the motorcyclist.

It seemed to have been a pretty big impact as the motorcyclist flew off the bike, along with some other things. The black MPV is then seen reversing. We sure hope the MPV didn’t decide to drive off, but it’s unclear what happened after the accident.

We hope that the motorcyclist is okay and are sending him well wishes.


It’s really dangerous to switch lanes without turning on the turn signal, and big vehicles like trucks have blind spots. What happens when these are combined together?

In this video, the action takes place on the left side of the camera. As the Lexus drives past the pedestrian traffic light, it begins to switch lanes. Due to the blind spot, the driver of the truck doesn’t notice the Lexus and ends up colliding into it.

The impact results in a big puff of smoke, indicating that the impact was probably really hard. We hope that the drivers are alright and that nobody is badly injured.