Inconsiderate Drivers of the Week: Episode 54 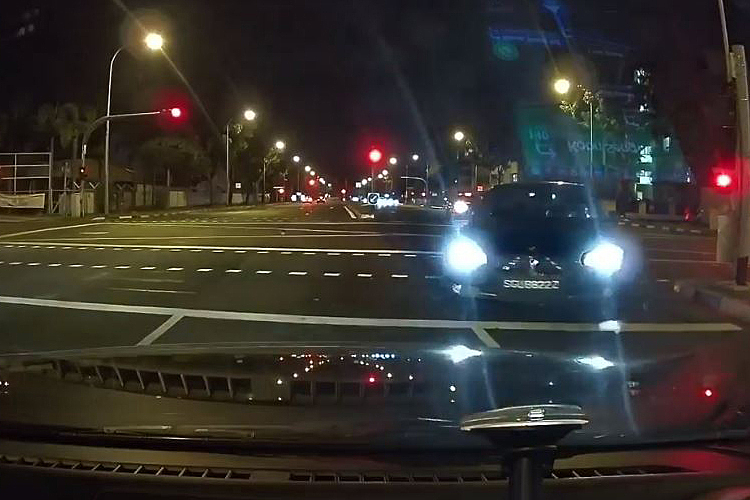 
In this episode of Inconsiderate Drivers of the Week, we feature cars driving into opposite lanes and a chain collision.

1. Lamborghini Cuts into Opposite Lane to Beat Red Light

Everybody in Singapore, whether driver or pedestrian, should know that a red light means “stop”. But alas, so many people still try to beat the red light whenever they can. Is that why Singaporeans are considered “kiasu”?

Let’s see what happens in the bottom half of the above video.

As the video progresses, you can see a white Lamborghini approaching the rear of the camera car. The car isn’t fully inside the lane, instead crossing over slightly to the opposite lane – an indication that the driver is thinking of switching lanes.

In the top half of the video, the traffic light switches from amber to red, and you can tell that the camera car begins to slow down. This causes the Lamborghini’s driver to switch over to the opposite lane and speed off, completely ignoring the red light.

Let’s just be relieved that there were no cars in the opposite lane or this could’ve ended with a really bad accident.

2. BMW Turns into the Opposite Lane Accidentally


When driving, everyone should be aware of where they’re turning, and to always remain alert. If you’re feeling unwell or are drunk, it’s always best to call someone to pick you up or to take public transport. Driving without a clear head could lead to disastrous consequences.

The above video takes place at around 11pm on that night. You can see the camera car driving to a stop when a black BMW turns in from the right onto the camera car’s lane, but in the opposite direction.

The driver of the BMW quickly realizes his mistake and reverses, turning over into the lane he was supposed to go into. It seems that he made too big of a turn.

It’s unclear whether the driver was drunk or just daydreaming, but if he didn’t realize in time, there might have been a collision between the BMW and another car.


As said in the previous point, drivers have to remain alert at all times, even when you’re waiting for the light to turn green. Let’s take a look at what happened in this video.

It starts off with the camera car approaching the red light, slowing down to a stop behind the Hyundai. It’s followed by a few seconds of the cars just waiting, when suddenly the Hyundai moves in front slightly.

When the motorcyclist stands back up, he talks to the driver of the Hyundai, who ends up helping him to the side of the road. While we can’t hear the conversation, we hope that there are no hard feelings between the two and that the motorcyclist isn’t badly injured.

4. White Van Collides with a White Car, Flips Over


Not all accidents are caused by disobeying traffic rules; there are times when drivers are completely compliant yet still get into accidents. The cause? Not paying attention to the roads and oncoming traffic.

In this video, we see a white car turning to the right when suddenly, a white van comes from the left, travelling straight.

With not enough time for both vehicles’ drivers to react, the car collides into the van, causing it to flip over. The front of the car also suffers some major damage.

Please be more alert when driving and always be sure to look out for oncoming traffic. Don’t take it for granted that just because you follow the traffic rules, you won’t get into an accident – because that is not true at all.

We also hope that both drivers are not severely injured and that they are recovering quickly.


Many accidents that occur in Singapore occur on the expressways, and the above video is no exception. And with so many vehicles on those roads, there is almost always a traffic jam when there’s an accident.

In the video, there is a red car that is attempting to switch lanes – possibly due to a traffic jam in front – when it collides with a motorcyclist in the next lane. As the red car swerves, it bumps into a silver car in front of it, causing that to turn and collide with the taxi beside it.

The extent of damage seems pretty severe, and the motorcyclist completely falls off the bike. Even with all the damage, we hope that none of the drivers and/or passengers were injured during the collision.