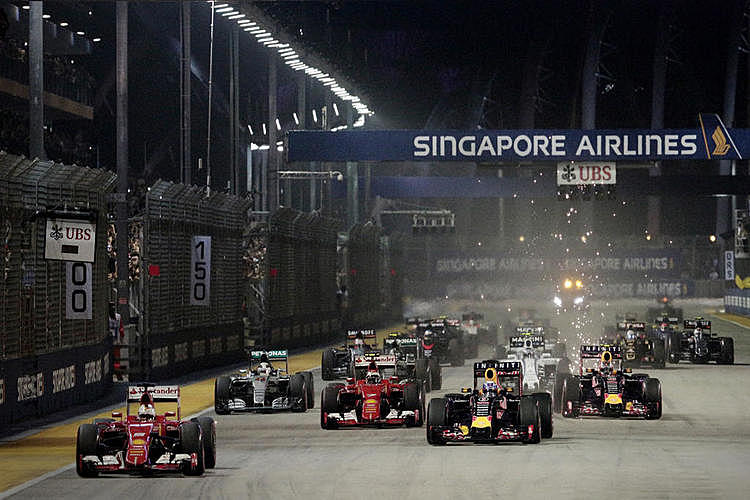 The Singapore F1 Grand Prix Night Race 2019 will take place from 20th to 22nd September. Here’s a list of road closures and road access you can expect during this peak period.

It is that time of the year again when the Singapore F1 Race is about to begin. Starting on the 20th of September and ending on the 22nd of September, this much anticipated event brings with it the world’s top race car drivers, a slew of talented and popular musical artists, as well as press coverage from all around the world.

In addition to economic benefits and prestige, this event also brings with it inevitable road closures. The race circuit for Formula 1 takes place in the heart of Singapore at the Marina Centre Area. Roads around Marina Centre will therefore be closed from 18th September onwards and will be opened progressively from 22nd September until 24th September 5:30am.

A select few roads will be opened during peak hours to facilitate ease of traffic. For drivers, you’ll need to take note of the roads that are going to be closed or re-opened again during peak hours. 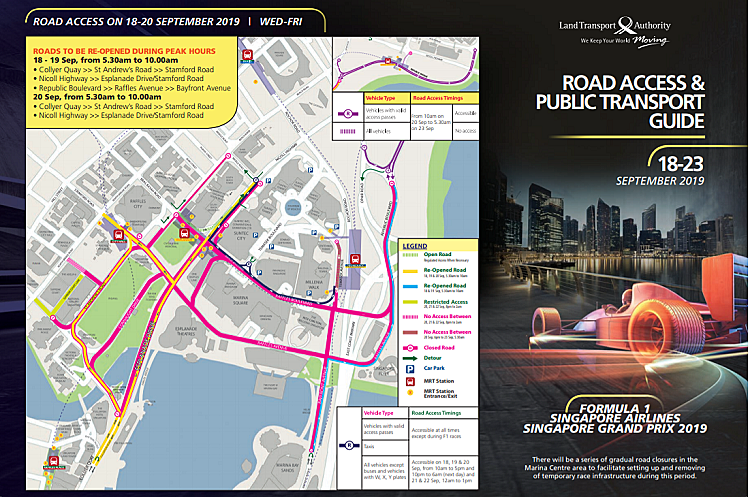 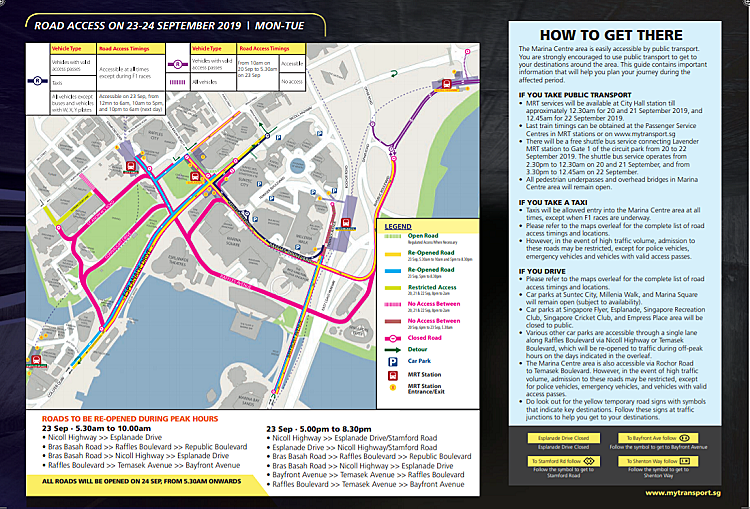 This year, the road closures for the Grand Prix will be over a period of seven days. These roads will be closed from 12 am to enable the set up of race infrastructure, and will open again at 5:30am, 24 September.

The roads highlighted in pink will be permanently closed from 18th to 24th September. These roads include:

As was done last year, this year a few road corridors will be open to facilitate traffic during the morning and evening peak hours at specific times. The following roads will therefore be closed at the stated timings: 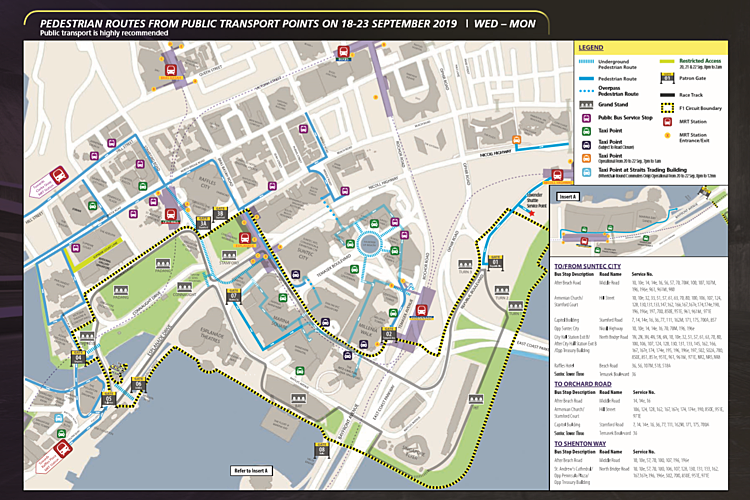 Motorists will be able to reach the Marina Centre via a single lane along Raffles Boulevard that can be accessed through Nicoll Highway or Temasek Boulevard from 12:00am to 1:00pm on 21st and 22nd September. This lane will also be easily accessible by taxis outside of the hours the F1 race will take place.

Motorists will be able to enter the Marina Centre through the Temasek Boulevard from Rochor Road after exiting the ECP. The carparks at Marina Square, Millenia Walk, and Suntec City will remain open to the general public. In addition, directional signs will be put up and traffic wardens will be deployed in the vicinity to guide motorists to Marina Bay.

The MRT service hours will also be extended on the days the F1 race will be held. If you’re going to the F1 race, you’re encouraged to take public transport, as it will ease traffic congestion on the roads. Most of the gates are within walking distance of the MRT, making it easily accessible for commuters, as seen in the image above.

To facilitate commuters returning from the F1 race the last train will leave from City Hall MRT station at 12:30 am on both 20th and 21st September, and at 12:45am on 22nd September. Specifically selected feeder bus services will also be extended as well.

Additionally, you can access the LTA website, MyTransport.sg and OneMotoring for more information. Did you find our guide on road closures for the F1 race useful? If so, let us know in the comments below!

Read More: Roads In Singapore To Avoid During The Peak Hour Rush