Inconsiderate Drivers of the Week: Episode 43 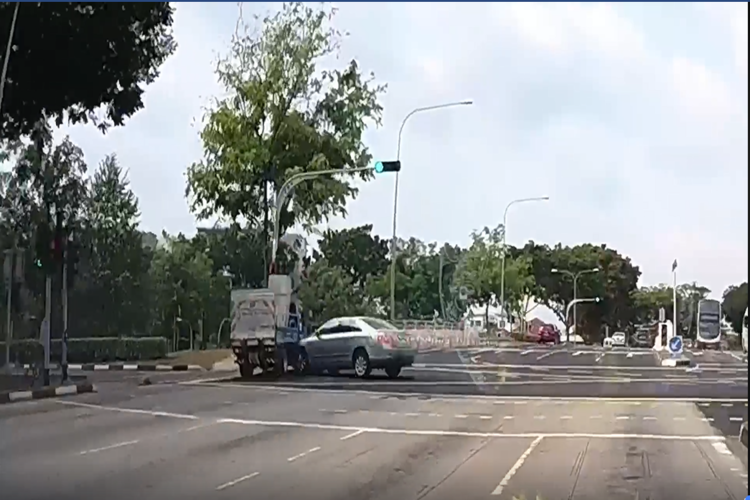 In this episode of Inconsiderate Drivers of the Week, we feature drivers falling victim to road rage and making right turns without checking for oncoming traffic.


1. Two Drivers Get Into A Brawl Alongside Changi Road Due To Road Rage

Not letting our emotions get the better of us is a lesson we should all live by. This goes double while on the road, as engaging in road rage may cause us to do something we will regret. It is vital to recognize that as citizens, we have the responsibility to behave in a courteous manner with our fellow motorists.

In the video above that has been much circulated, we can see a truck and a car stop at the side of the road after having some form of collision. While it is unclear how the accident came about, both of their side mirrors seem to have shattered. This has evidently incited particularly intense cases of road rage in both drivers as we see them engage in a shouting match full of profanities.

While most cases of road rage in Singapore get resolved after a bit of mediation, this particular case of road rage escalated to the point of arrest. As seen in the video, despite a man in white running over to mediate the argument, the situation worsened. After exchanging profanities, the drivers exchanged blows. The female truck driver then took a rod to the car, imparting significant damage. The video ends in the driver of the car addressing the one taking the video that he had no fault in the issue. The latest update we’ve received is that both drivers have been arrested and were tried in court on 1 st August.

At discretionary right turns, motorists are advised to use their good judgement when making the turn. Not being cautious enough when making the turn could result in an accident, and damage incurred to the parties involved. Turning without waiting for oncoming traffic to pass is a mistake we cannot afford to make.

In the above video, the footage shows the camera car heading down a lane when up ahead, a Toyota makes a discretionary right turn. Speeding forward, it collides into a lorry, dealing damage to both vehicles.

It is always important to check if the road is clear when turning into a lane. The responsibility is ours as drivers to ensure that it is clear enough to turn, as not doing so could result in mishaps. During the occasion when an accident does occur, we should be ready to help all injured parties at the scene immediately.

As seen in the video above, a Toyota driver makes a right turn into a lane that is visibly not yet clear. As a result a biker crashes into the vehicle. Fortunately, the driver of the Toyota immediately exits the vehicle to ensure that the biker is alright.

4. Driver Does Not Check Before Changing Lanes, Knocking Comfort Taxi Into Center Divider

Like the previous video, not checking before turning into a lane can be disastrous. The roads are a shared public space. It is important to recognize that we should be considerate towards our fellow road users and avoid incidents whenever possible.

In the footage seen above, a comfort taxi is seen to proceed down the road. All of a sudden, a car from the next lane attempts to switch lanes, knocking the taxi into the center divider.

When approaching a junction, it is vital to slow down and observe the rules of traffic safety. Even whilst being in a hurry, it won’t do anyone any harm to slow down and ensure the road is clear. This is even more important to observe at junctions that are busy and frequented by traffic.

In the above video, a van is waiting at the junction along Woodlands Avenue to make a right turn. When he finally does so, a biker speeds down the road and crashes into the side of the van.