Inconsiderate Drivers of the Week: Episode 32 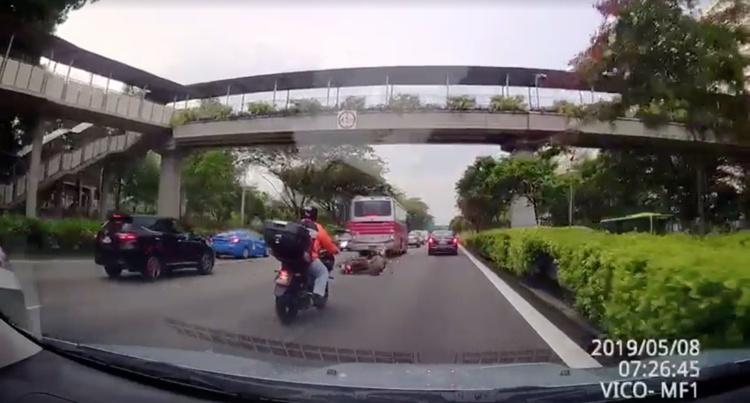 
In this episode of Inconsiderate Drivers of the Week, we feature more dangerous drivers, including one who swerved out of lane and another who hit the side of a van and drove off.


In heavy traffic, some driver’s first reaction to an impending accident up ahead may be to swerve away from danger. While it may seem like a good idea at first, abruptly swerving into the next lane without warning to avoid an accident can cause you to have your own accident.

In this video, we can see a build-up of traffic on an expressway. As a queue formed on the first lane, a Honda driver suddenly decides to swerve to the second car, in front of the camera car. Luckily, the camera car reacted quickly and managed to avoid a collision for the Honda.

2) Motorcyclist Falls After Trying to Squeeze Between Lanes, Following Motorcyclist Was Unable to Brake in Time


Most motorcyclists like to ride on the lane divider as a quick way to slip through heavy traffic. It’s effective but dangerous at the same time. One of the main reasons for this can be highlighted in the first video. Another reason being the danger highlighted in this video.

In this video, we can see motorcyclists riding and overtaking vehicles between lane one and two. Suddenly, one of the motorcyclists fell off his motorcycle while riding between a bus and car. The following motorcyclist brakes but he was unable to stop and avoid the fallen rider in time.

The title says it all. In this video, a motorcyclist is waiting at a traffic junction while pedestrians and vehicles were crossing and passing by in front.


In another straightforward video, a motorcyclist with a camera attached to their helmet was travelling on an expressway. Just as the motorcyclist passes a black Honda Civic on the right, the helmet camera captures the driver holding his phone.

In the still, the driver appears to be holding the phone in one hand and using it while steering the car with the other hand. Just in case it’s not clear, it is illegal to use your phone while driving. You can only hold your phone while your car is stationary.

By using our phones while driving, it would affect our vision, focus and reaction time while behind the wheel, and that could mean the difference between life and death.

5) Car Swerves and Hits Van, Knocking the Van out of the Lane Before Speeding Off


Road rage incidents appear to be on the rise here in Singapore, with more and more drivers deciding to hit-and-run after damaging another car instead of stopping.

In this video captured from a motorcycle (hence the poorer than usual quality), a car is travelling on the left lane, looking to take the exit on the left. From the right, a van is filtering left while signalling, presumably because the driver wants to take the same exit.

After getting hit by the car, the van driver slows down to a crawl, but the car in question just made the turn off and sped away. The van driver waits by the turn off for a gap to slip in and make the turn off, presumably to chase down and catch the driver that crashed into him.