Inconsiderate Drivers of the Week: Episode 25 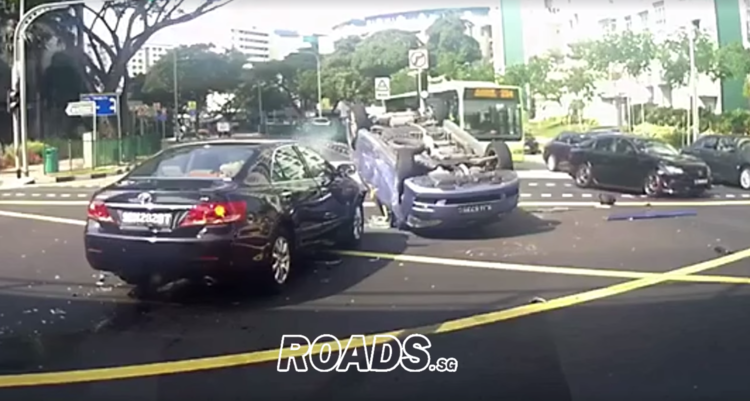 
In this episode of Inconsiderate Drivers of the Week, we feature some more red light jumpers, drivers who change lanes without checking for traffic and a Taxi driver reversing on an expressway.

1) Transcab Driver Reverses on an Expressway


Missing an exit while driving happens to even the best of us. But this is Singapore, even on an expressway, there will be another exit about a minute’s drive away. While that may seem inconvenient to other drivers, the alternative to moving on to the next exit places the lives of everyone on the road in danger.

In this video, we can see a Transcab taxi driver reversing on an expressway after missing their taxi. After reversing to a point where the driver can turn into the exit, he or she stops to wait for an opportunity to go.

From what we can deduce in the video, there could have been a passenger in the taxi that might have been insistent on using that exit after the driver missed it. Regardless of what was the situation prior to the dangerous and reckless act, no driver should be reversing on the road, unless under extreme conditions, like if an accident occurred right in front of his or her car.


The title says it all. In the video, we can see a taxi driver jumping a red light. On the left, there was a black car with the absolute right of way approaching. The black car then T-bones the Taxi with considerable force.

The twist? There was a pedestrian with the right of way crossing the road, and he or she would have been in the direct path of the offending taxi driver if he or she had driven on. Luckily, in a miracle akin to an act of god, when the black car T-bones the taxi, it stops the taxi and pushes it out of the way of the pedestrian.

The pedestrian escapes unscathed, leaving the black car and the taxi with damage. Hopefully, the authorities and insurance companies will look at the situation in its entirety, and that includes the lucky pedestrian who probably owes the black car driver a great deal.

3) Honda Driver Changes Lane Without Checking, Causing a Motorcyclist to Fall off Motorcycle


Signalling while wanting to change lanes is only one part of the action, it does not automatically grant you the right to change lanes regardless of the prevailing road conditions. You still need to exercise due diligence in terms of safety checks and good judgement to make sure it is safe to change lanes.

In the video, we can see a steady flow of traffic going through a tunnel. Just as a motorcycle is passing through traffic in-between two lanes, a Honda car starts to signal and move over to the middle lane without realising that there was a motorcycle approaching from behind.

The motorcyclist reacts to the car pulling out and brakes hard. Unfortunately, the motorcyclist was unable to maintain control of his motorcycle, thus falling off of it. From the video, it is unclear whether there was any contact between the Honda car and the motorcycle.

Luckily, the other drivers reacted quickly and acted accordingly to avoid running over the motorcyclist. After the incident, the motorcyclist appeared to be sustained no major injuries.


One of the biggest no-no’s in driving in skipping a red light. As we have said many times, it’s not worth saving that minute or two on the road while at the same time, placing a great deal of danger on other drivers and pedestrians alike. As we will see here, it sometimes can end horrifically.

In the video, we can see a Blue Toyota Picnic moving off from a traffic light after it turned green. The road past the junction was under a bridge, thus it was difficult to see approaching traffic from the left. Suddenly, a Toyota Camry appears from the left after having jumped a red light.

The Camry driver crashes into the Picnic with considerable force due to the speed of the former prior to the collision. Due to the impact and position of the collision, the Picnic flips into its roof. It is unclear how many people were injured in the crash.


In heavy traffic, drivers are often advised to exercise good lane discipline. This is to ensure fairness and safety when vehicles are moving slower than usual. If you must change lanes, please be sure to check that vehicles behind you are aware of your intentions and giving way to you.

In this video, we can see a Volkswagen Golf driver changing to the middle lane on a crowded road. After the lane change, a motorcycle starts following the Golf closely. But just ahead, a BMW driver on the left lane starts to poke out into the middle lane. Reacting to that, the Golf driver slows down and inches right to avoid the BMW.

From what can see in the video, in which the view of the motorcycle and the Golf before the lane change was obstructed, we have deduced that all three parties share blame in the incident.

The Golf driver should have waited for the motorcycle to pass before changing lanes. The motorcyclist should not have followed the Golf so closely after the latter went into their lane. Finally, the BMW driver should not have indiscriminately poked the front of the car out before it was safe to change lanes, forcing the vehicles behind to take evasive actions.