​Inconsiderate Drivers of the Week: Episode 8 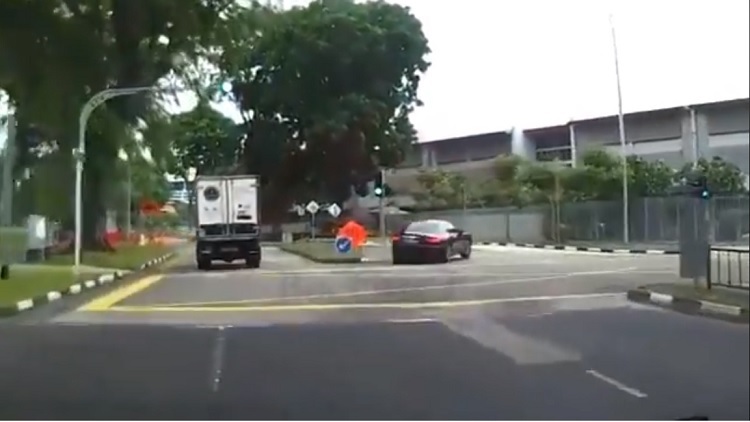 
Several reckless individuals make up this episode of Inconsiderate Drivers of the Week. Make sure you don't follow in their example!

This video shows a Maserati driver driving recklessly, while trying to overtake a lorry. When he was unable to do so, he had to swerve to the lane in the opposite direction, jumping the curb and barely missing a traffic light pole.

Continuing to drive against the flow of traffic, the Maserati missed two close shaves with a taxi and car coming the other way. The car then crossed the double white lines in the middle of the road to get back to the left side and weaved around the lorry, overtaking it and then stopping.

The police have confirmed the driver, a 49-year-old man, has been arrested for dangerous driving. Netizens on Facebook have also called out the driver for his reckless driving.


Turns out, the video above of the Maserati and the lorry isn't a one-off act of road recklessness by the Maserati driver. After that video was posted, many more different ones appeared on Facebook of the same Maserati car engaged in other instances of reckless driving on the road.

In this rear-camera video, the Maserati can be seen speeding up to the car and tailgating it. After overtaking the car on a merging lane, the Maserati driver proceeded to play the 'Braking Game' with the same car. Such petty behaviour, wouldn't you agree?


When making a turn, especially a right-turn on a two way road, always ensure you look out for oncoming traffic and pedestrians across the road. This video shows a white car on a main road making a right -urn into a side road. The driver failed to make sure the road was clear of oncoming traffic before making the turn.

A motorcycle was unable to stop in time to avoid the turning car and crashed into it, sending the motorcyclist into the air. According to the comments on the Facebook post, the motorcyclist is now in the Intensive Care Unit (ICU).


This accident happened along Pickering Street. A Private-Hire car turned into the pick-up/drop-off point of a building and mounted the kerb. Instead of reversing to get off the curb, the car accelerated ahead onto the empty footpath and into the glass walls of a bar, which was closed at the time.

The passenger, a 53-year-old woman, was hurt and sent to hospital. No one else, including the driver, was hurt. Netizens on Facebook shared some theories on what they think had happened. A popular one was that the driver confused the brake and accelerator pedal.


It's very important to take note of markings on the road, especially at traffic lights, so as to not endanger the lives of other fellow motorists. This off-service SMRT bus didn't though, unfortunately. The video shows rear camera footage of a car waiting at a traffic light on a straight and right-turn lane. The SMRT bus was on the lane to its right, a right-turn only lane.

When the light went green, the camera owner slowly edged out turning right, getting in front of the bus. That wouldn't have been a problem if the bus had turned with it. But the bus went straight, nearly colliding with the back of the car. It was unsure who sounded the horn, but thankfully, the car and bus driver both stopped, avoiding an accident.

The car continued its turn-right, while the bus remained stationery. Some netizens pointed out that the bus creeped slightly to the right, as though the bus driver wanted to turn right, but a subsequent video uploaded showed the bus went straight in the end. Timothy Chua
road hazards! these drivers need to have their license revoked
Like Reply