Inconsiderate Drivers of the Week: Episode 3 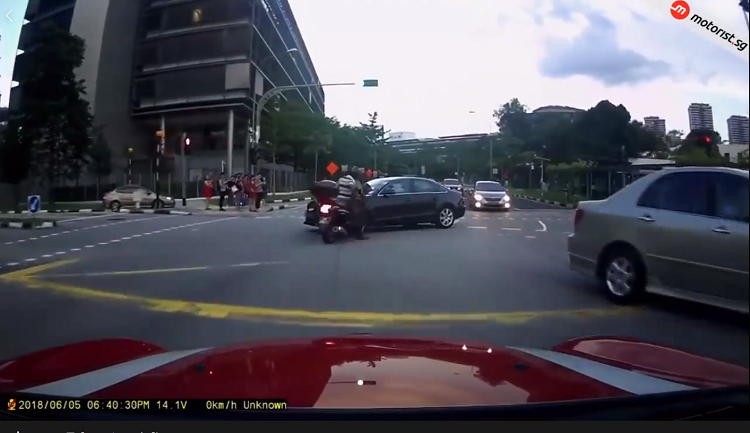 Another week, another group of inconsiderate drivers. This week's episode serves as a reminder on why patience is an important virtue on the road.

In this weekly feature, we'll be taking a look at local drivers who were caught on camera for their inconsiderate and reckless driving. These drivers exhibit poor driving etiquette, and we hope you never emulate their behaviour on the roads.


The taxi driver in this clip is clearly at fault for making a sudden left turn. However, he appears to be blaming the motorcyclist for the accident. The biker, who was travelling straight in his lane, was caught off-guard by the taxi’s sudden turn and couldn’t react to avoid the taxi.

To avoid getting stuck at a right light, the following driver decided to use a filter lane to bypass a traffic junction. This kind of dangerous driving should be condemned as it puts other road users at risk. Luckily, there were no other cars or pedestrians waiting at the junction.

This video serves as evidence on why you should always pay attention on the road. Although the red light has already turned, the black car driver can be seen driving straight into the path of a turning vehicle. This accident could have been avoided if the black car driver was more attentive.

4) BMW Bangs into SBS Bus After Failing to Give Way

BMW drivers have developed a bad reputation on the road, and with this video, it’s easy to see why. After failing to give way to an SBS bus, the BMW collided with the larger vehicle and ends up damaging its bumper. There was even a Bus Priority Box on the road, but the BMW driver failed to comply by it.

An Audi attempted a discretionary right turn without first checking for oncoming traffic. A motorcyclist and his pillion could not avoid the car and crashed into it. Luckily for both parties, the motorcycle wasn’t travelling at a fast speed. Remember, it’s always better to be safe than sorry.


The purpose of this compilation isn’t to shame or expose these drivers, but to learn from their mistakes. In all honesty, the driving culture in Singapore leaves a lot to be desired. We lack basic road courtesy and we don’t mind causing inconveniences to other road users if it benefits us. We sometimes even put their lives at risks with our careless and nonchalant driving.

Read more: Inconsiderate Drivers of the Week: Episode 2 (19 to 25 May) Chua Alvin
aiyo. how did these ppl get their license????
Like Reply