Inconsiderate Drivers of the Week: Episode 2 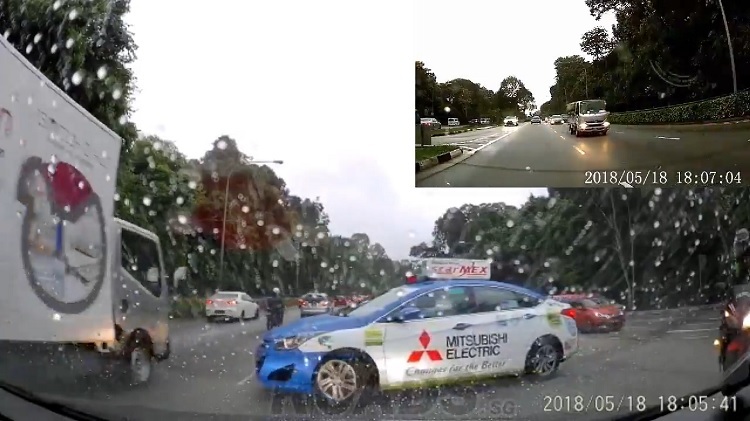 Reckless driving acts caught on camera this week include beating the red-light, making an illegal U-turn, and dangerous driving while making a turn.

In this new weekly feature, we'll be taking a look at local drivers who were caught on camera for their inconsiderate and reckless driving. These drivers exhibit poor driving etiquette, and we hope you never emulate their behaviour on the roads.

Here’s a prime example of why you should always slow down when making a turn. In this video, a yellow Toyota C-HR is seen making a high-speed turn at a traffic junction. The driver ends up losing control of the vehicle and mounts the pedestrian pavement. Thankfully, there were no pedestrians waiting to cross the road. If there had been pedestrians, the incident would probably have ended with injuries or the loss of lives.

This taxi driver was caught making an illegal U-turn along Lornie Road during a “no U-turn timing”. Besides breaking traffic rules, he also inconvenienced other drivers by causing them to jam their emergency brakes. According to ComfortDelGro, the errand driver has been “taken to task for making the illegal U-turn”.

There’s nothing more dangerous than a heavy vehicle running a red light. Unfortunately, this trailer truck was caught doing just that at the Braddell Road exit. Although the traffic light had turned red for a good eight seconds, the truck driver failed to stop and drove straight through traffic. Luckily, the vehicles that had the right of way were vigilant and waited for the truck to pass before driving off.

4. Driver Fails to Check Blindspot, Side Swipes a Motorcyclist

Watch this video if you need a reminder on checking your blind spot. Captured along the CTE, a motorcyclist was sideswiped by a car as it attempted to change lanes. Based on the comments in the video, some netizens are pointing the blame on the motorcyclist for lane splitting. Regardless of who’s at fault, the driver should have checked his blind spot before attempting to switch lanes.

5. Two Drivers at Fault, One for Being Impatient and the Other for Running a Red Light

In this clip, two drivers were found to be at fault. The cam owner was prepared to make a right turn when an oncoming car ran the red light. The other driver had to swerve his vehicle to avoid a head-on collision with the cam owner. Although the other car was at fault for beating the red light, the cam owner has to share the blame for being impatient. Not only did he failed to wait behind the stop line (there was no turning pocket), but he also moved off before the right-turn arrow was shown.


The purpose of this compilation isn’t to shame or expose these drivers, but to learn from their mistakes. In all honesty, the driving culture in Singapore leaves a lot to be desired. We lack basic road courtesy and we don’t mind causing inconveniences to other road users. We sometimes even put their lives at risks with our careless and nonchalant driving.