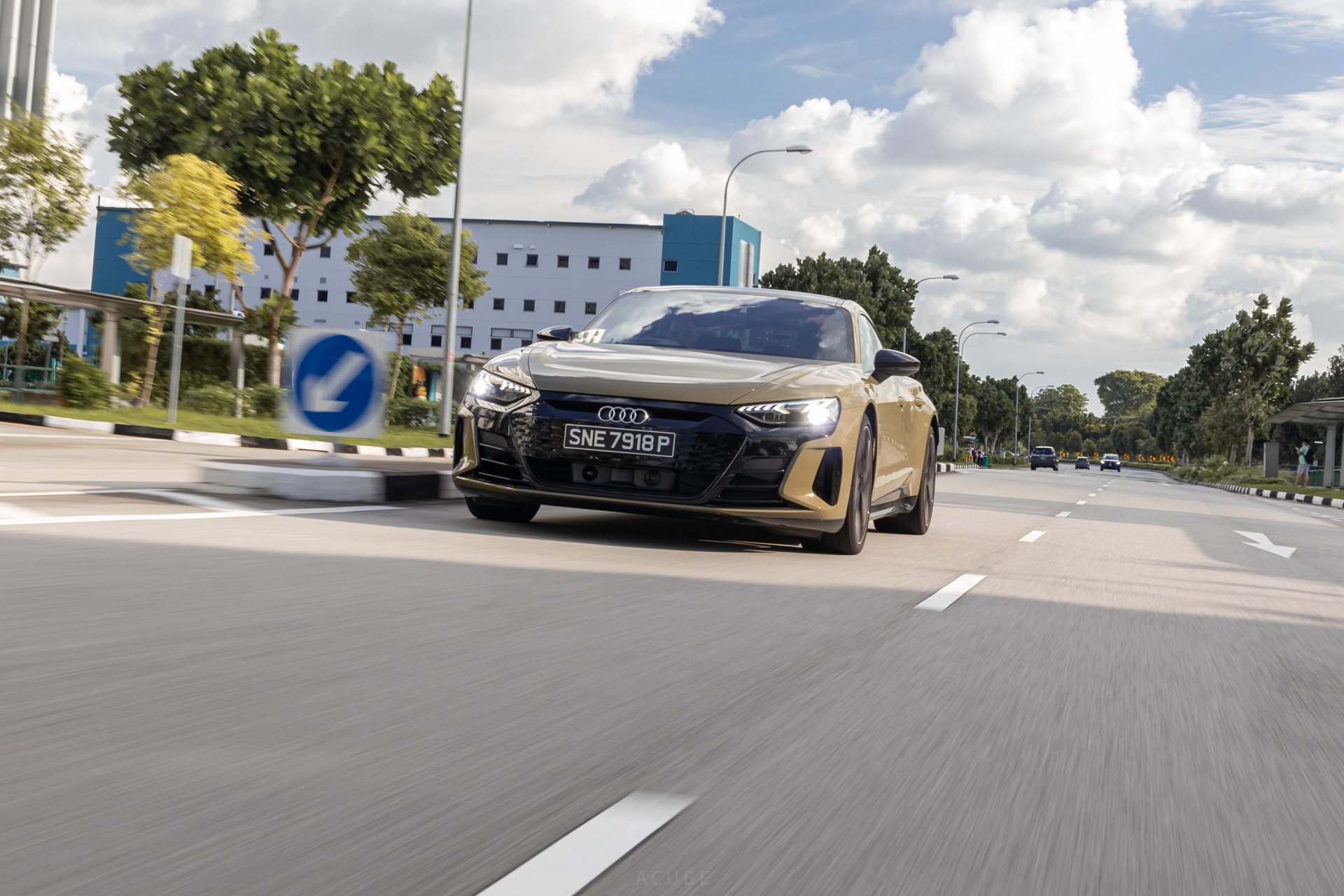 The Audi e-tron GT might as well have come from the future. It looks like nothing else on the road, and that’s saying something, seeing how car design has converged in the past decade.

But the concept car aesthetics isn’t the only thing that is futuristic about the car. In fact, it might just about be the closest thing you’d experience to another piece of technology that’s just science fiction for the time being. 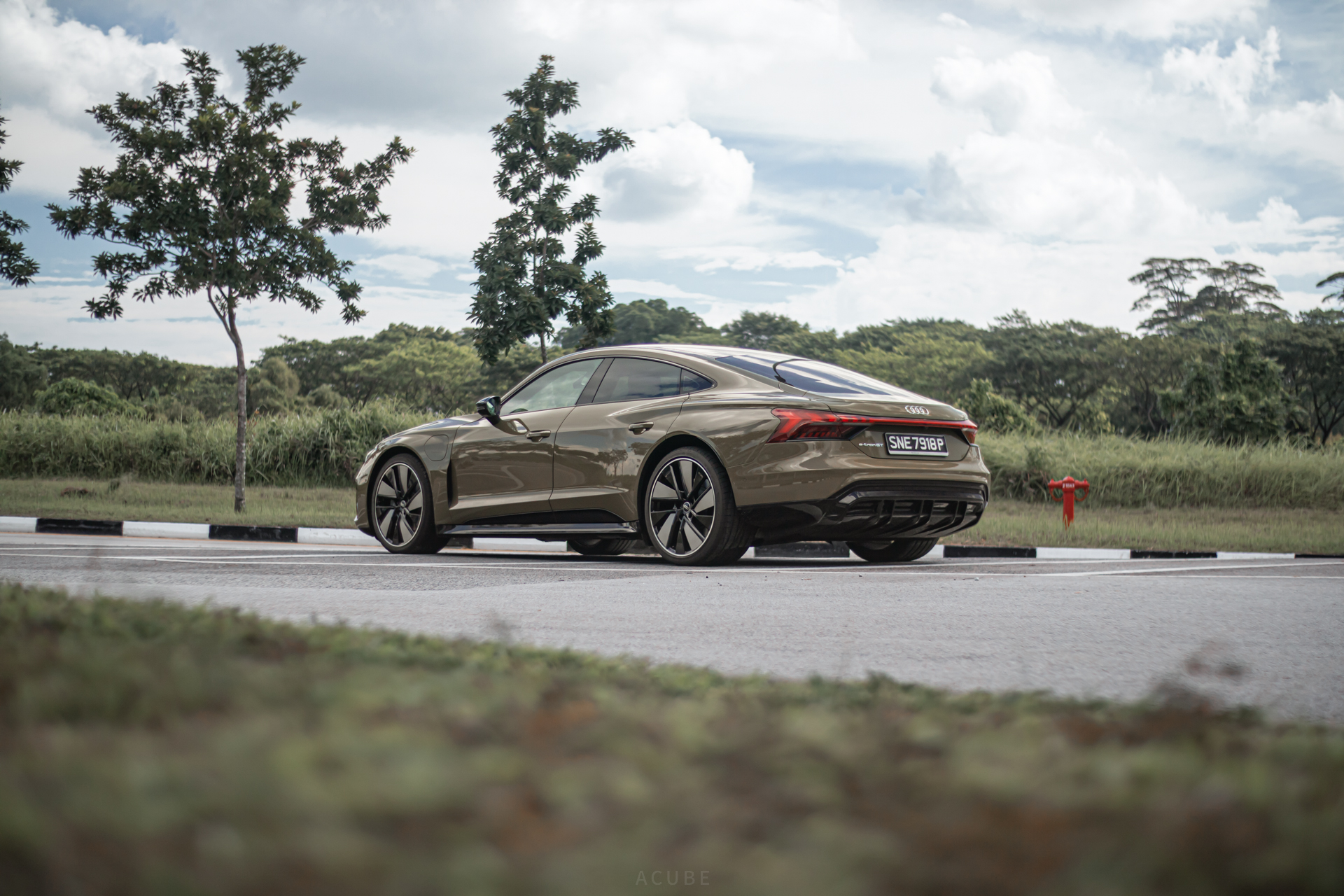 Yes, the e-tron GT is so rapid off the line, that it’d probably give you a semi-accurate representation of what teleportation feels like. You’d be hard pressed to find another vehicle that’d out-shine this off the line (except maybe its full-fat RS e-tron GT stablemate), though it actually has more character than just brutal straight line speed.

Conventional Where it Matters

It may have the mechanical capabilities to create some mind warping speeds, and looks straight out of a sci-fi flick, but Audi has opted to keep the car conventionally feeling where it really matters. And that is a refreshing departure from the current electric car norm, where manufacturers are stuffing their offerings with futuristic gimmicks.

You’d find a very familiar Audi MMI system taking care of the infotainment screen, and switchgear that also makes an appearance on other Audi models. The instrument cluster, whilst being a dedicated unit for the e-tron GTs, still retains a lot of the user interface that you’d have come to expect from an Audi product. 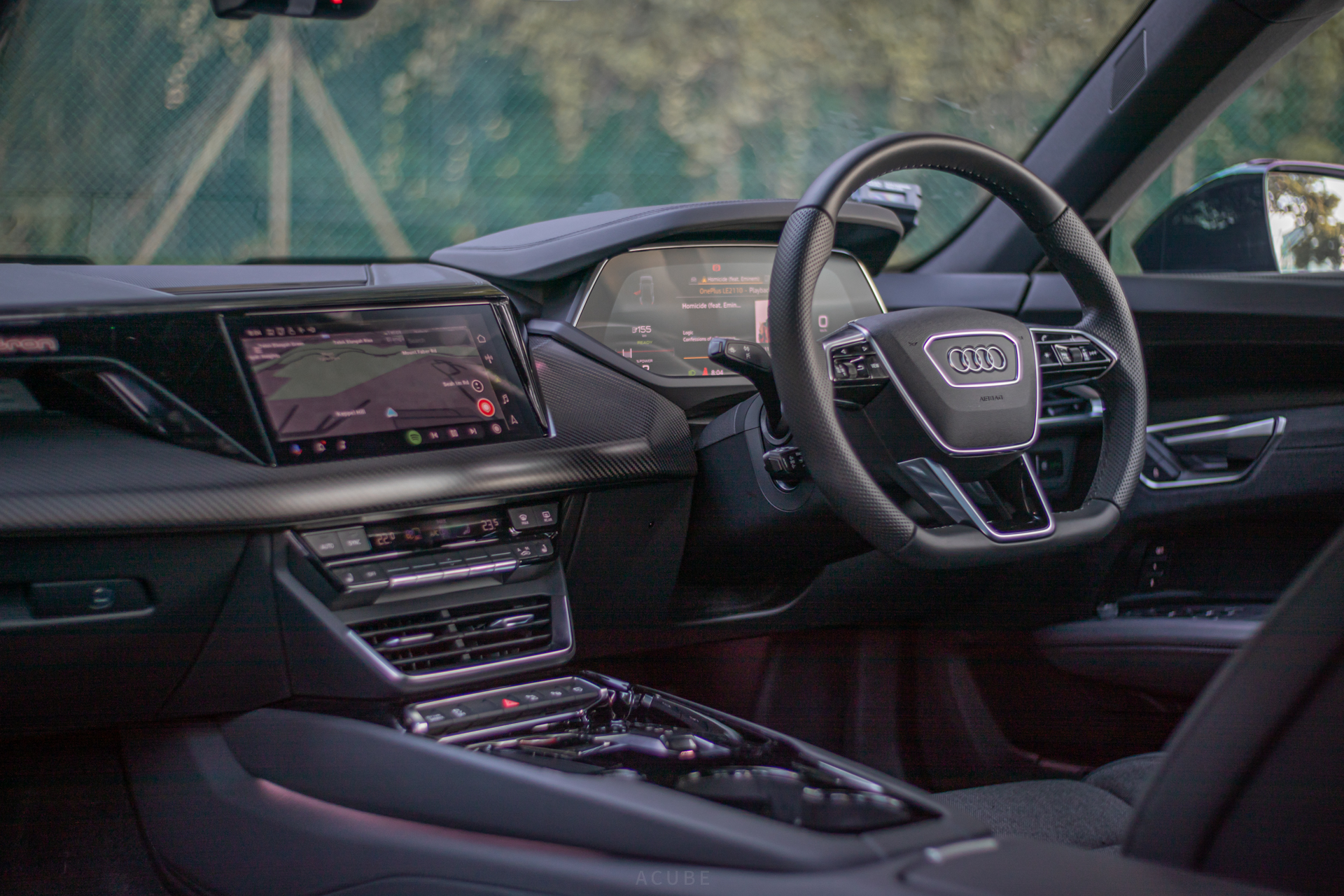 Still, despite using most of the buttons and controls that you’d find in other Audi cars, the designers have still managed to create a cabin that makes it feel like it is worth the many hundreds of thousands of dollars that Audi wants for an e-tron GT.

The interior is festooned with carbon fibre, and paired with sustainable materials that are every bit as competent in emulating the luxury experience that your stereotypical leather and suede can create. Ventilated seats are available as an option, but were not fitted in our test car. 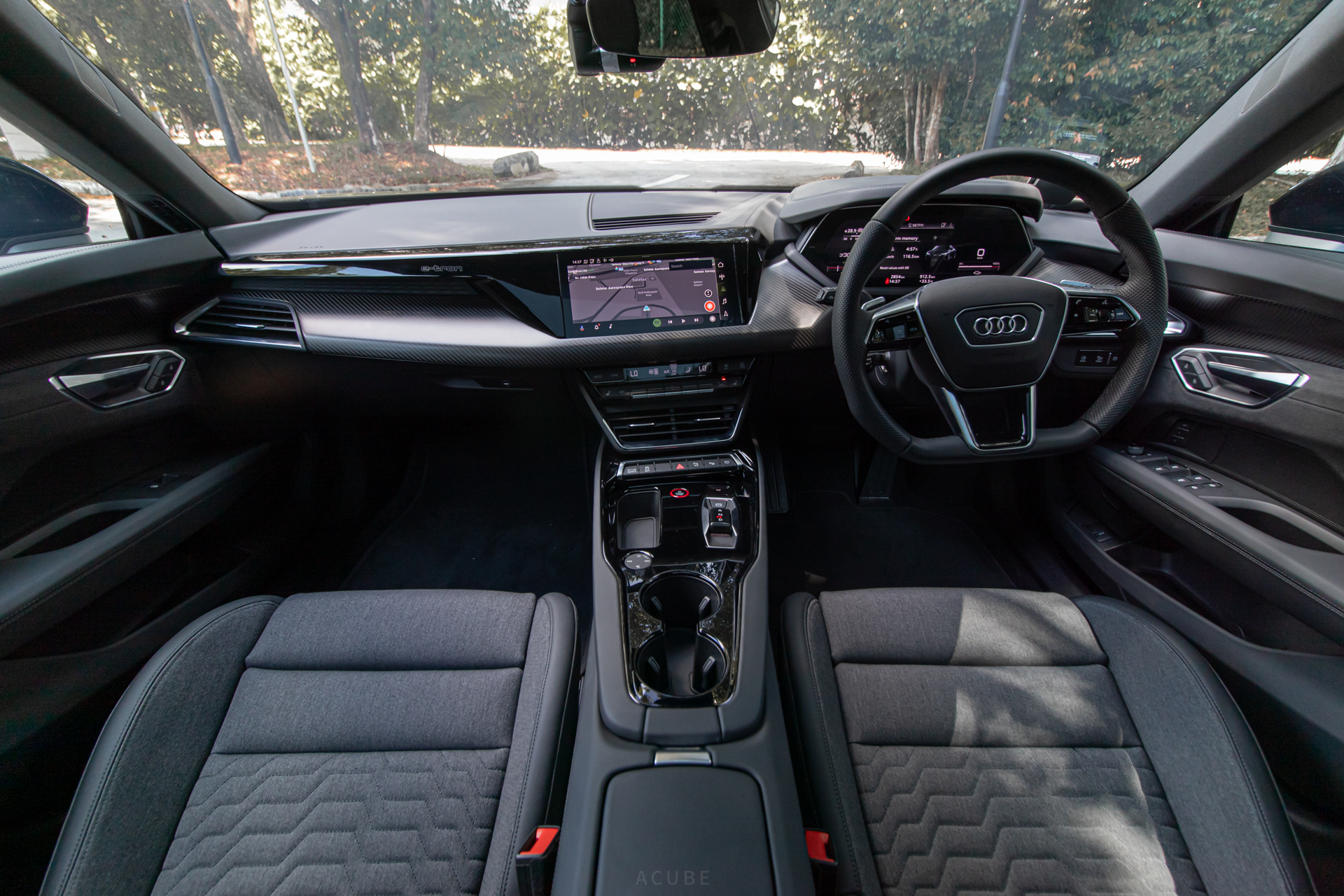 I really like the seating position behind the wheel too. It is low slung, and the ergonomics just make sense, really egging you on to unleash all of the car’s 469 horsepowers. In fact, I really only have one major complaint, which is that rear legroom could have been improved, especially considering how large the car is on the outside.

The low slung fastback shape, fat haunches and the swooping yet aggressive bodylines up front helps to create the illusion of big speed, even if the car is stationary. All the usual thoughtfulness that Audi puts into the build of their cars is present, albeit massively stepped up to create one ultra capable electric grand tourer. 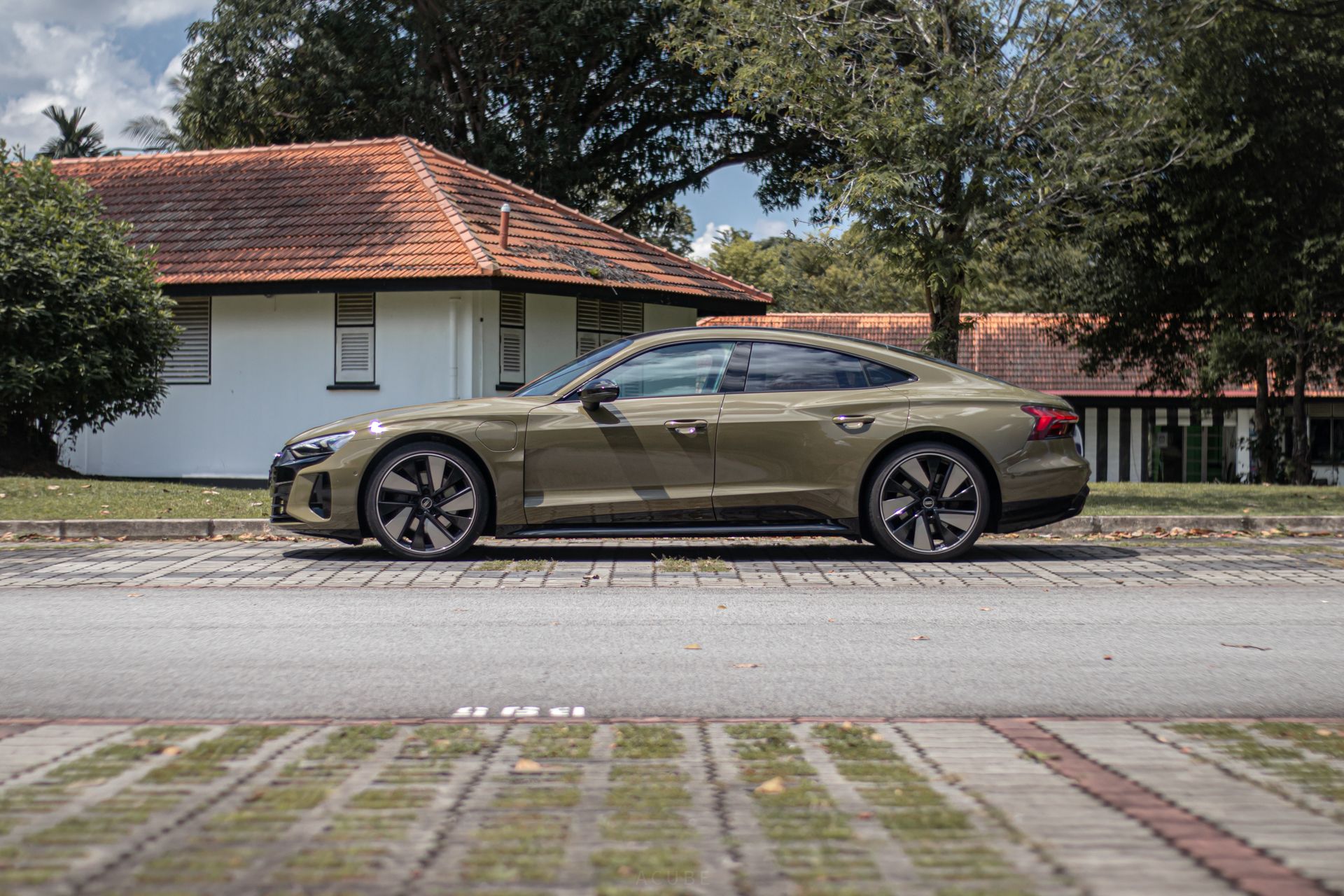 And props to the guys that are optioning these cars for the media - this colour just works. There’s always a risk in using unconventional colours for a car, with some bolder colour options bordering on tacky. This shade of olive green highlights the bodylines of the car, without any of the pitfalls that may arise from a left-field choice in car colour.

All in all, if you are paying so much cash for a car, you’d want it to look a million bucks, right? Or at least, as close as you literally can to making it look like a million bucks.

Acceleration? What’s that? The Audi e-tron GT doesn’t understand the concept of acceleration, it teleports. At least, that is what it feels like. Burying your foot into the footwell results in this frenzied rush off the line, and the car will relentlessly pull till some very LTA-unfriendly speeds. Allegedly anyways. 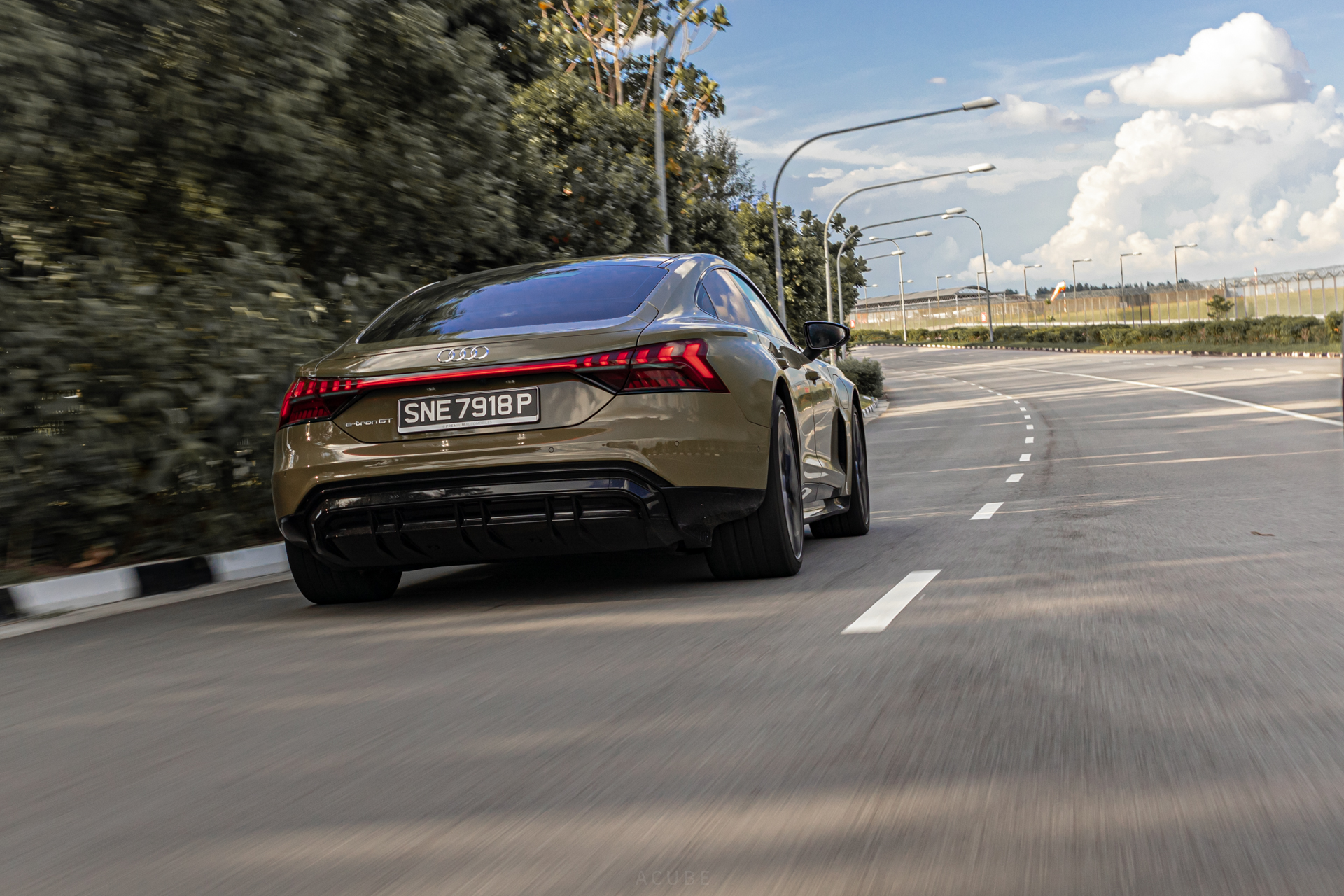 The sports car facade tends to fall apart for many high power electric cars when you introduce a sequence of corners into the mix. Thankfully, that isn’t the case with this vehicle. It is ruthlessly capable, having a torque vectoring system that ensures you always have traction even though you are actively trying to do the direct opposite. Grip and stability imbues more than a sense of confidence, allowing you to really tackle whatever corner you want, at any speed of your choosing.

It is really only when you are trying to lose traction intentionally that you’d actually get the rear end to travel at a trajectory that isn’t in line with the direction the front wheels are pointing in. The steering rack itself is fairly accurate and quick, though it could do with some toning down of the power steering for greater feedback. Torque steer was also minimal, considering the raw power being sent through the front wheels. 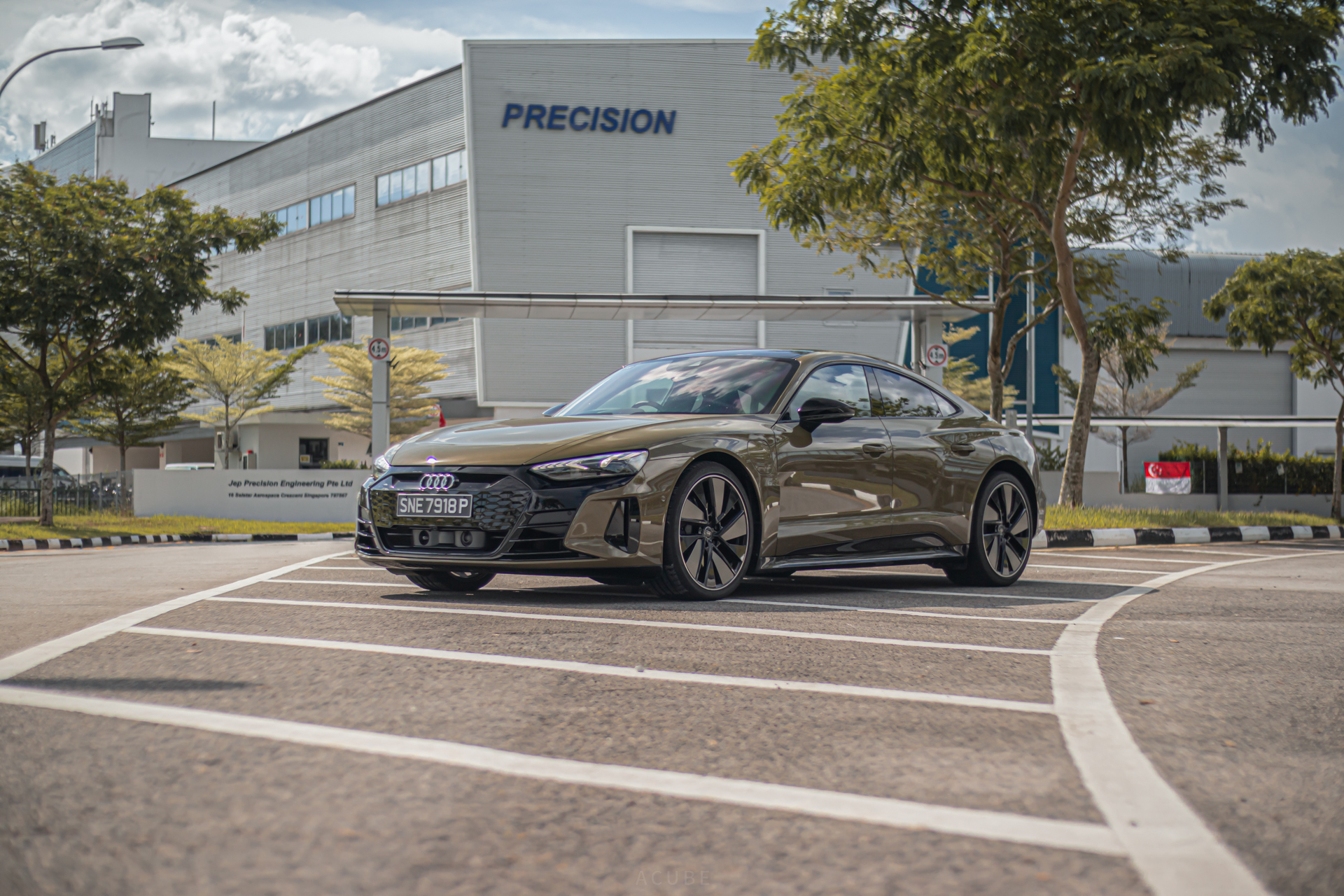 And it is ruthlessly competent at being a high-speed grand tourer too. I had a chance to sample the car across the border on an e-tron media drive to KL, and I can confirm that at triple digit speeds, the car remained stable, and as silent as it was when you are just pottering around town. All things considered then, it is a mega capable machine that is perhaps a little too good for our roads.

So Who’s The e-tron GT For?

Here’s the conundrum then. This car is so mechanically advanced that you’d never really be able to use the car to anywhere near its fullest potential on our roads - at least, not if you decide to religiously obey our local traffic laws.

You’d never find a road that genuinely poses a challenge to the chassis of the vehicle, nor a straight long enough and is unrestricted to allow its motors to properly breathe. But that’s really not to say that there isn’t a market for the Audi e-tron GT. 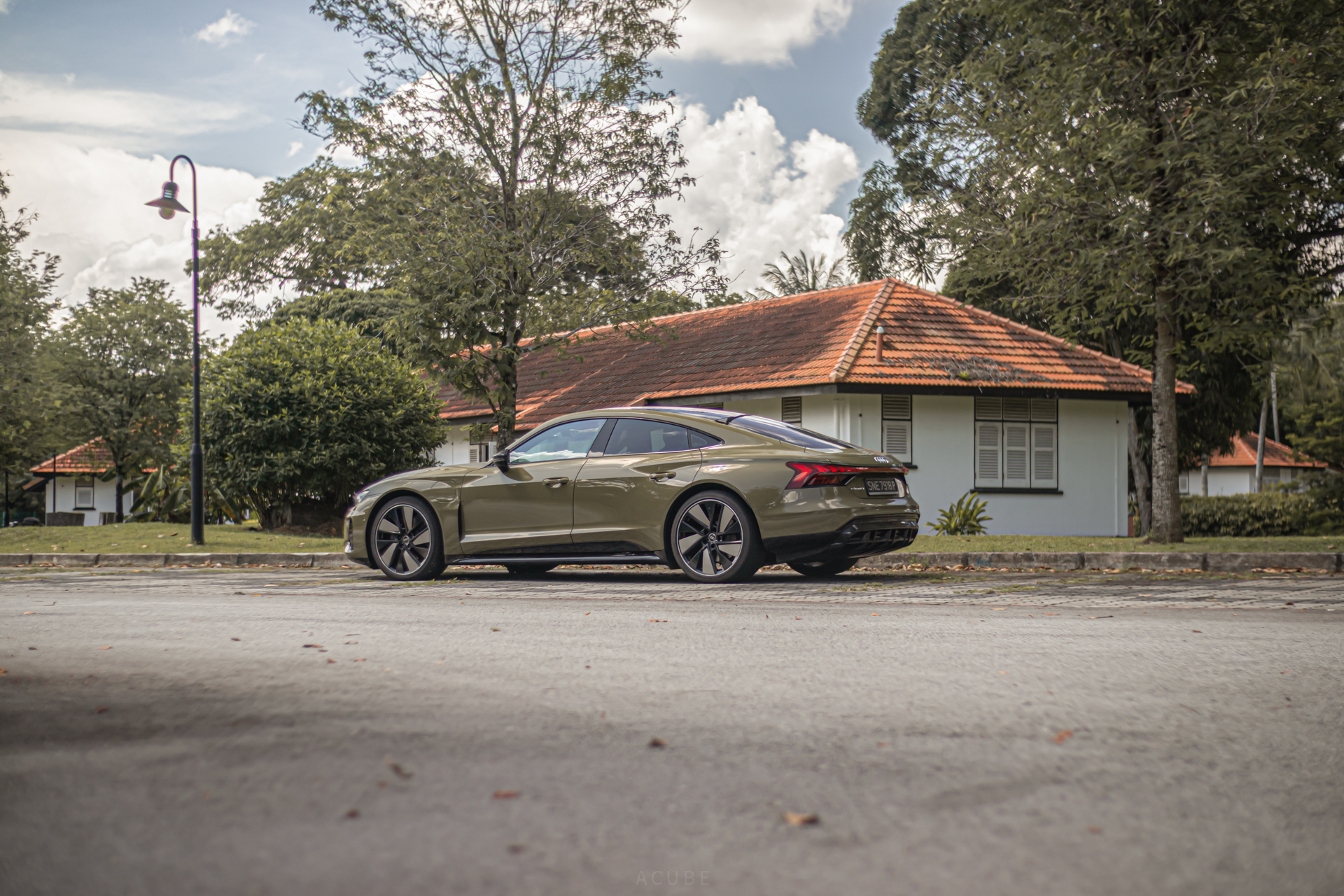 It is meant for the individual that eschews convention, wanting a vehicle that classfully reflects their refusal to obey the stiff upper lipped, business suit-wearing norm that has been set by the rich and influential.

Because one thing is for sure - there’s nothing on the market today that is quite like it. And it actually makes for a solid daily too, with big range numbers and an interior that doubles as respite from the hustle and bustle of the business world. And if you have the pockets for such a car, you’d cherish every bit of peace that you can get, for (loosely translated from a mandarin proverb) rest is only the first step of a longer journey ahead.