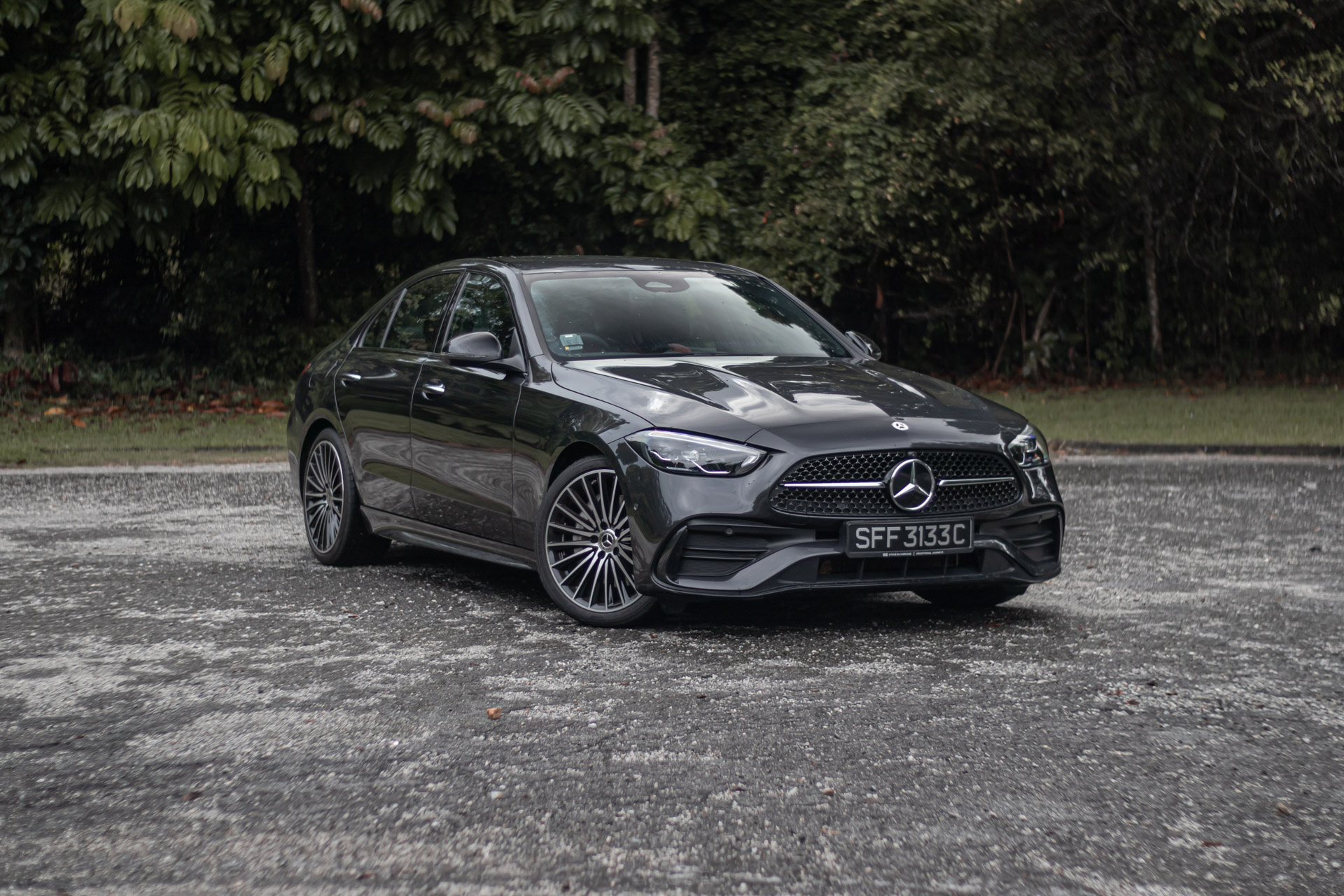 The Mercedes-Benz C-Class is the bread-and-butter of the great German marque. This nameplate has almost 30 years of history, and we've had a go in this latest iteration!

Now in its fifth generation, the new C-Class, dubbed the W206, debuts a few key features never before seen in its predecessors. You can buy your non-AMG C-Class in two variants - the C180 and C200, each available in two trim levels, the Avantgarde and the AMG Line. 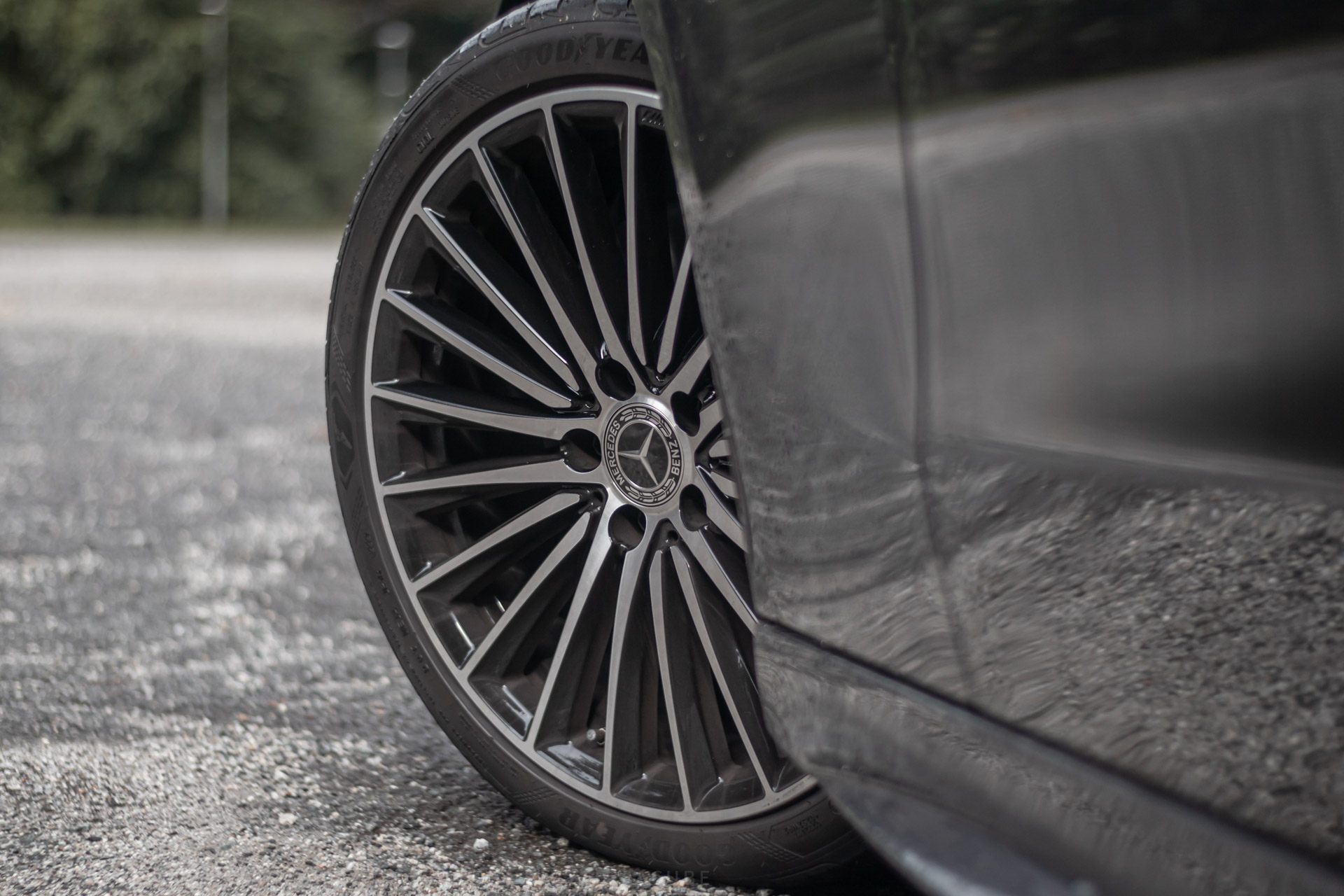 Our test car is a C200 AMG Line. A C300e model variant as well as what will be the AMG offerings are to follow in the next couple of months.

The front fascia of the C-Class on AMG Line cars has been given an update, with the front grille design made up of 200 three-pointed stars for that lil’ extra flair. It’s a great design and really plays into the branding. The Avantgarde trim models only get a conventional grille design. On the other hand, all models of the new C-Class have raised power domes on the bonnet to highlight the new C-Class’s emphasis on sportiness. 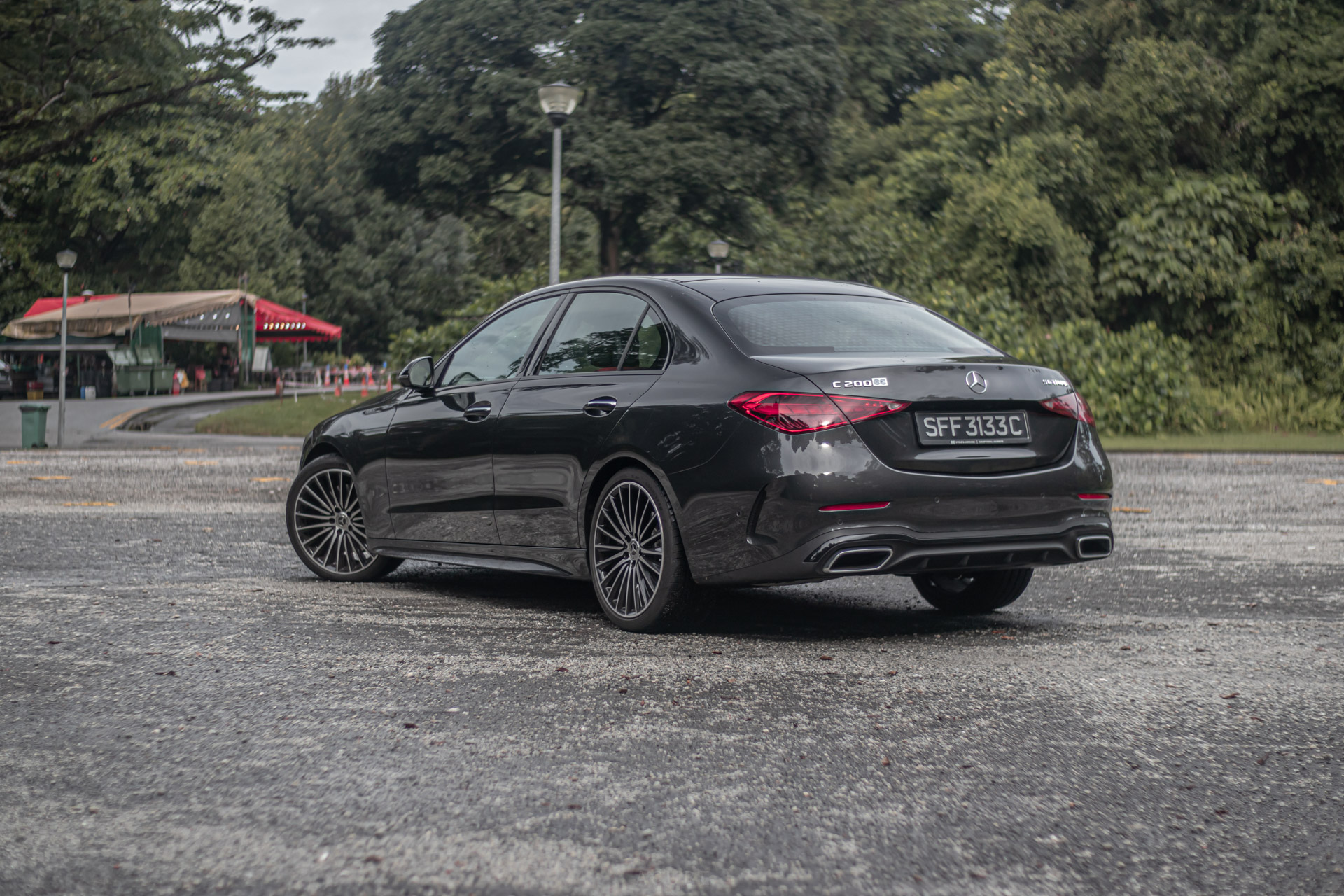 Along the side of the car, depending on what model and the trim level you have, you can either get the car with 18” or 19” rims. This generation of C-Class has grown in every dimension, with a wider track giving the car a sportier appearance on the road.

The C-Class features new redesigned LED taillights that are two-piece and go across the fender as well as the boot. They have a really gentle curve to them as well as a feather-esque design which give the taillights an elegant appearance. The rear of the car also sports some optical (read: Fake) exhaust tips but I’m sure the full-fat AMG versions will make proper use of those spaces. 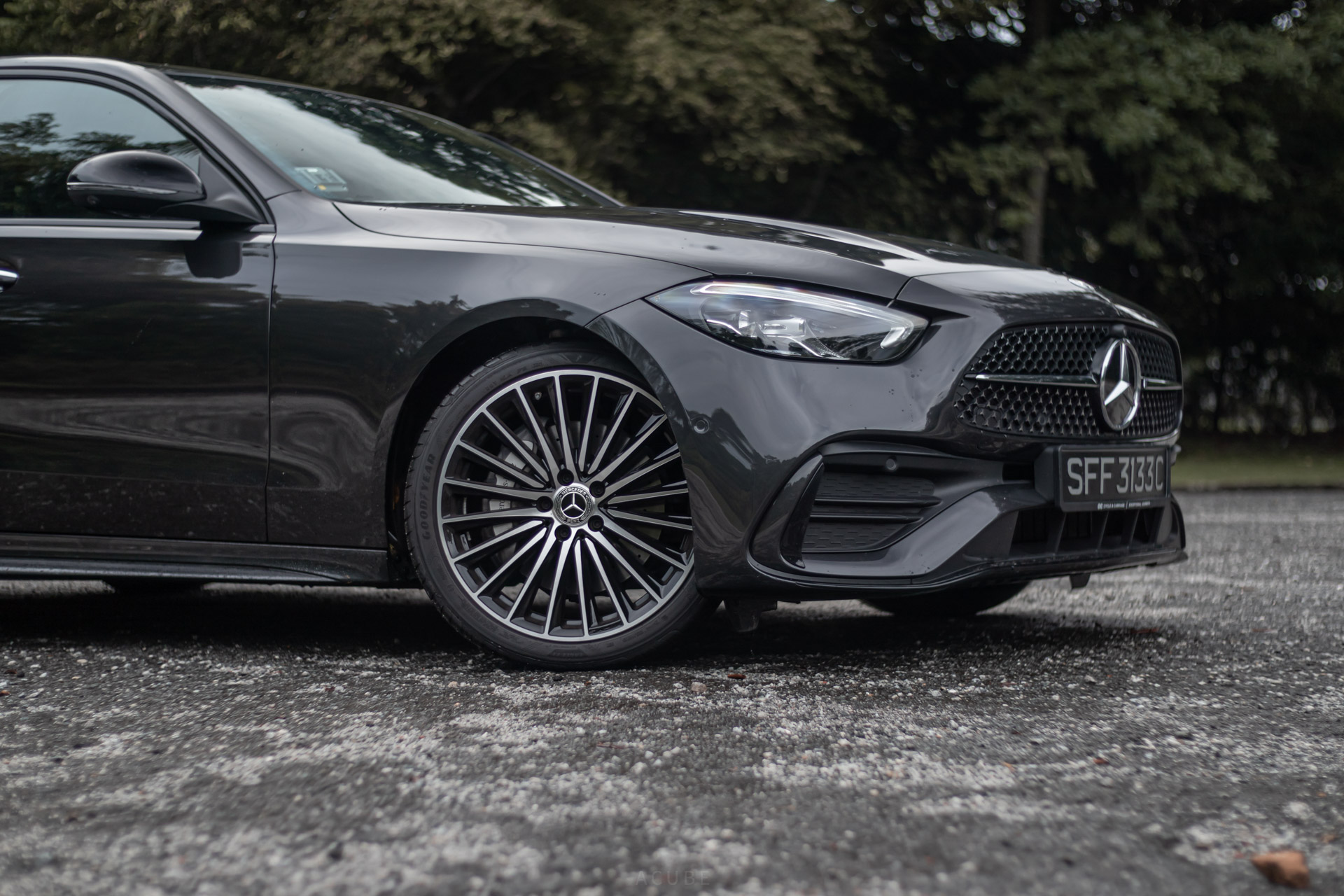 The boot of the C-Class isn’t exceptionally large but there’s still about as much space as you might expect from a standard sedan. If more cargo space is required, you can always fold down the rear seats totally, or just the armrest area for more through loading space.

Overall, the new C-Class’s design doesn't really break any boundaries or really get out there but it builds upon a design many years in the making.

The wheelbase of the new C-Class has increased by 25mm and that means that in the back seats, legroom, knee room, and foot room are all very decent and unless you’re unreasonably tall, headroom won’t be an issue either.

The bulk of the upgrades though are only accessible from the front seats. The most obvious change is the gigantic centre screen that houses the latest Mercedes-Benz UX (MBUX) infotainment system. This screen houses all the controls for the car’s functions as well. The C-Class as expected features wireless Apple CarPlay and Android Auto so you can enjoy your music through the fantastic Burmester sound system. The whole screen is straight off the S-Class and really elevates the feel of the interior to the next level. 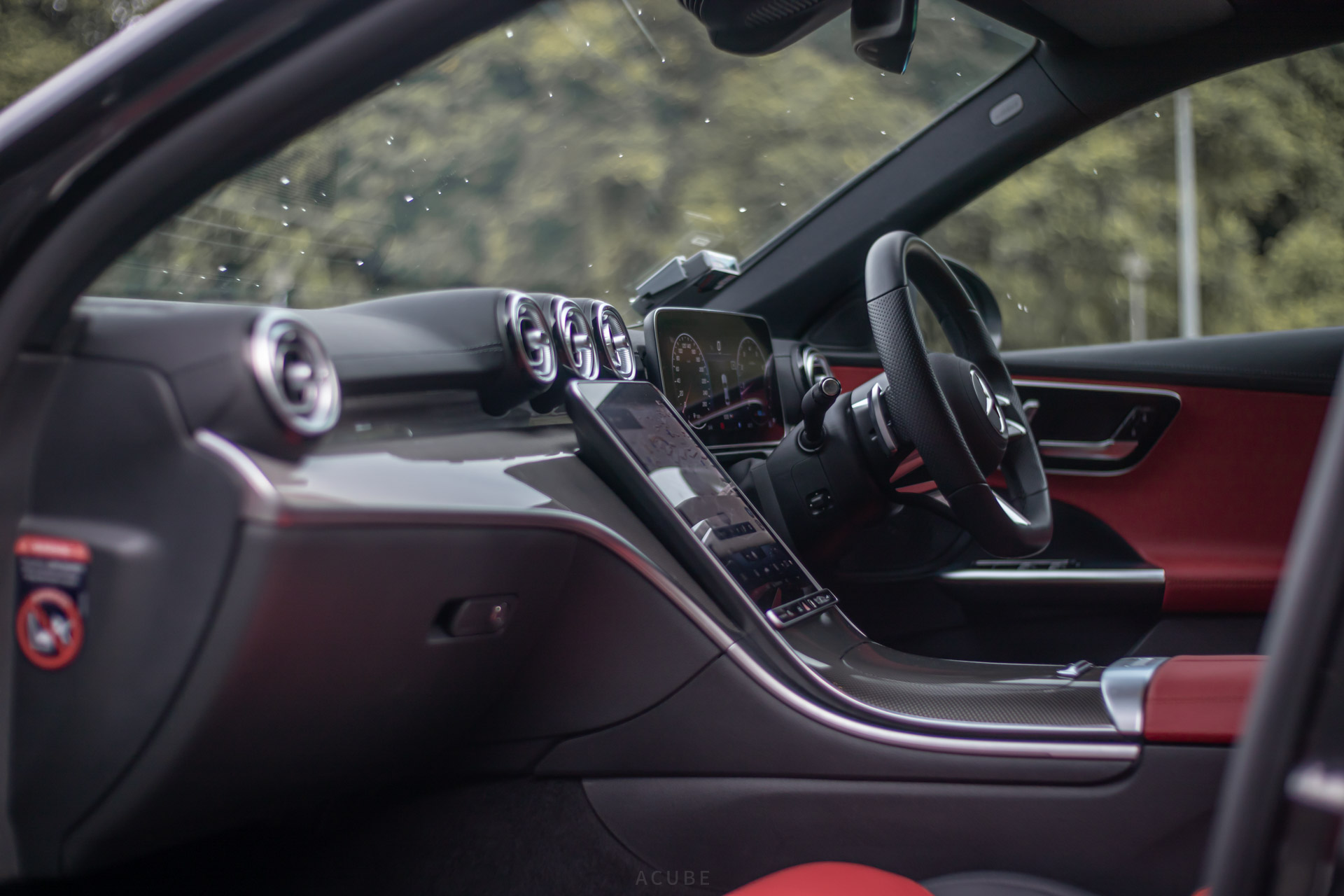 The screen also adds the functionality of Augmented Reality (AR) Navigation. This feature uses the front cameras to stream a feed of the road ahead on the centre infotainment screen, the car then superimposes AR arrows and road names and such on that video feed so you get real-time navigation directions overlaid on a feed of the actual road in front of you. It only works with the car’s built-in navigation system so if you use CarPlay or Android Auto it won’t show up but for those of you who don’t (or if you want to show off to your friends as I did), then this feature works really well.

The driver also gets a fully digital gauge cluster that’s highly customisable and you can get an optional heads-up display to go along with it. Depending on what trim level you spring for, you’ll either get a standard round steering wheel (Avantgarde) or a flat bottom one (AMG Line). However, I’m still not a big fan of the touch pads that Mercedes uses on the wheel instead of conventional buttons, it’s rather finicky to use and it can be quite hard to select exactly what you want. 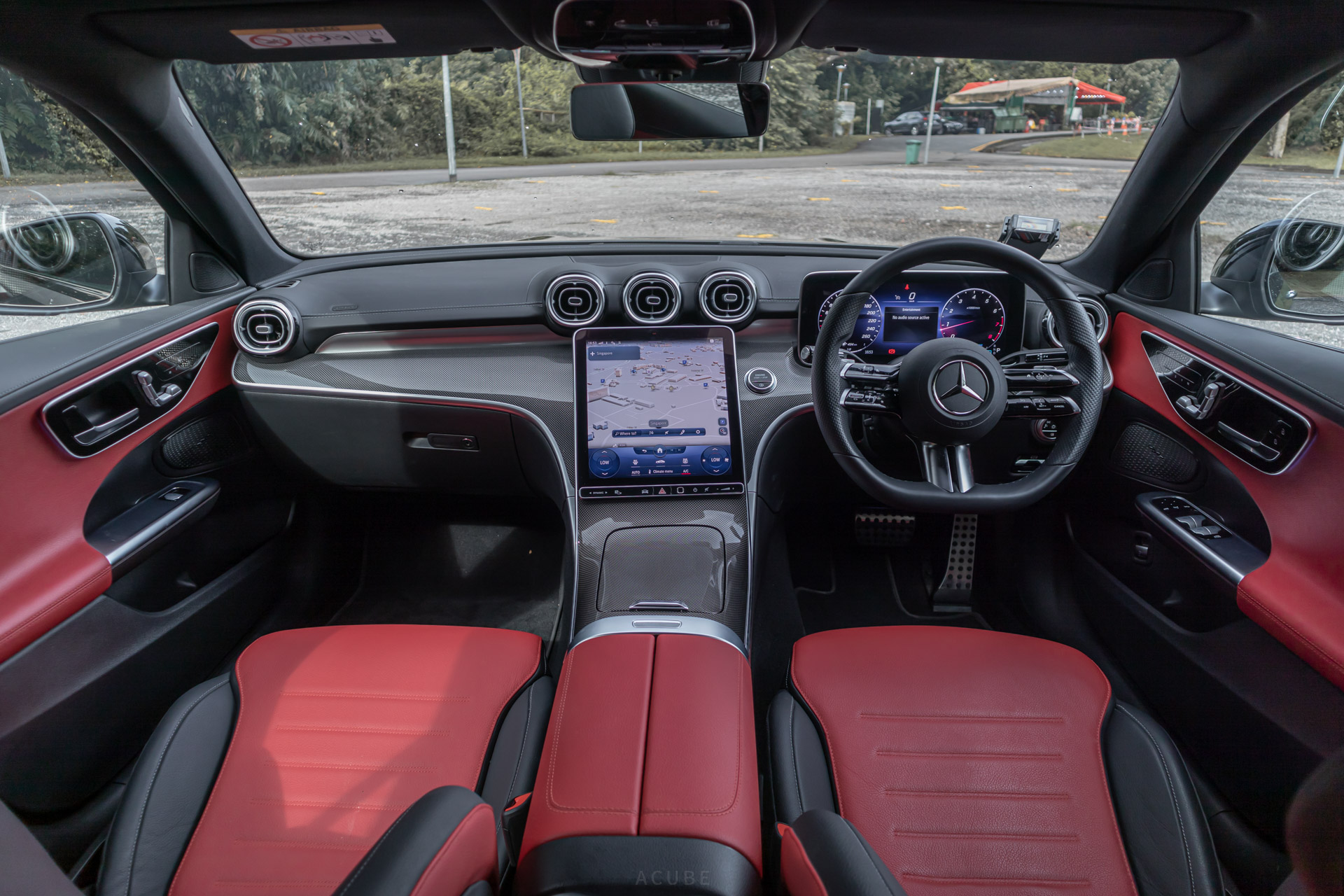 One thing I do love though is the ambient lighting. I’ve said it before and I’ll say it again, Mercedes are the world champions in ambient lighting with a huge selection of colours and themes for you to choose from. While the quality of the interior is very good as you would expect from a Mercedes-Benz, the interior colour choice of our test car left a little to be desired.

The black and red interior when done well is exceptional, however, in the C-Class, the red goes across the entire middle of the seats which doesn't seem as elegant or attractive as if it was used a little more sparingly. And because this car has an expansive centre console, with it all in black, it actually makes the car feel very cramped and claustrophobic. At the press launch for this car, they had a car there with a white interior which, in my opinion, is a far more aesthetically pleasing option than the black.

The biggest difference with the new C-Class is the fact that the whole range is now electrified. The C180 and C200 models are fitted with a 48V mild-hybrid system with an integrated starter-generator and there is a C300e plug-in hybrid variant coming soon that will be able to drive 100km on battery power alone. 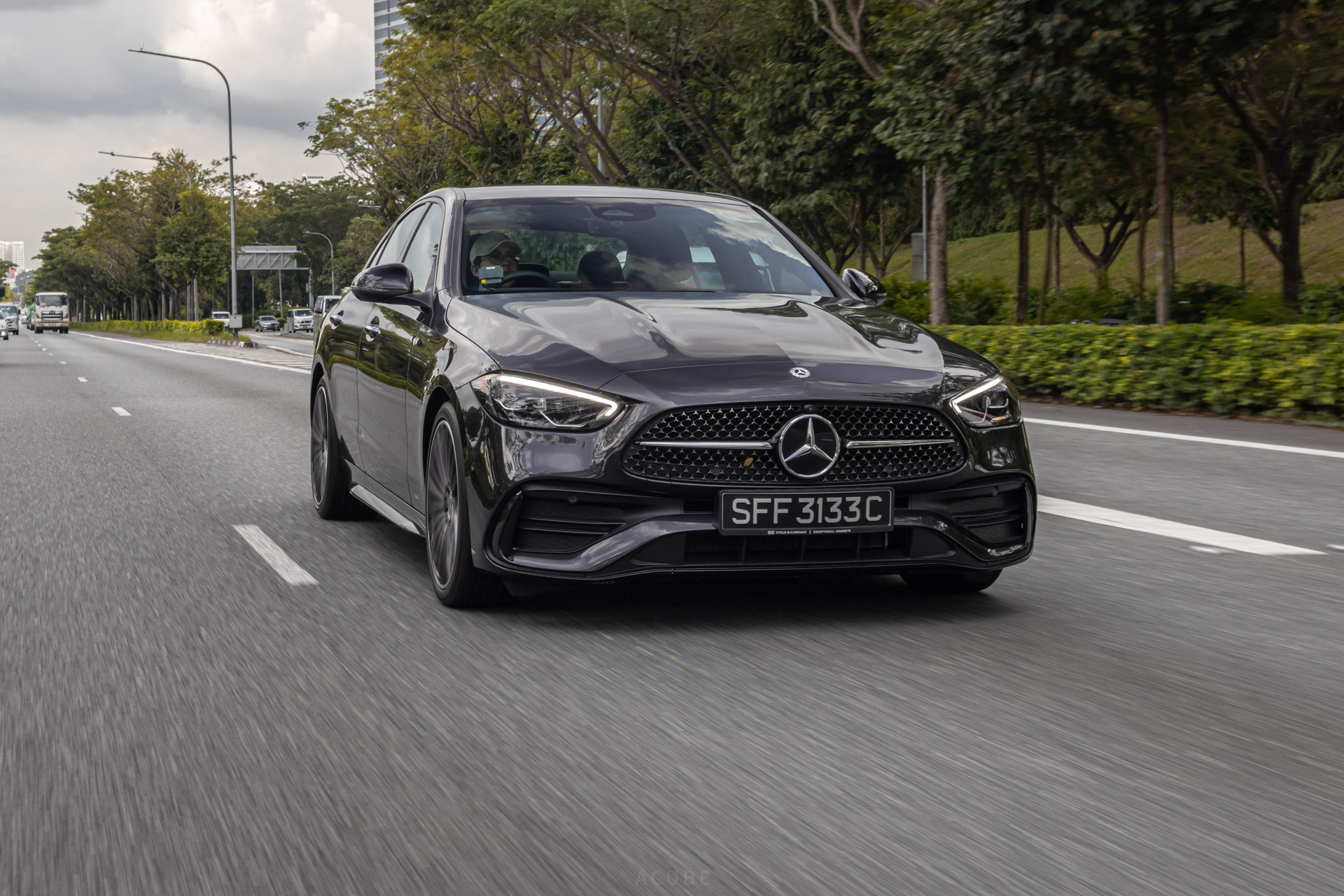 The standard engine is a 1.5L turbocharged four-cylinder engine mated to Mercedes’ 9G-Tronic nine-speed automatic gearbox. C200 models get 201hp and 300Nm of torque while C180s only get 168hp and 250Nm of torque. Power delivery is linear and provides more than enough shove for the average customer while still achieving excellent gas mileage thanks to its small engine.

The C-Class’s other big new feature is the addition of rear-wheel steering across the board. At speeds below 60kph, the rear wheels turn in the opposite direction to the front wheels to give it a tighter turning circle and added manoeuvrability at low speeds. Above 60kph, the rear wheels turn in the same direction as the front wheels to virtually lengthen the wheelbase and give the car more stability at high speed. 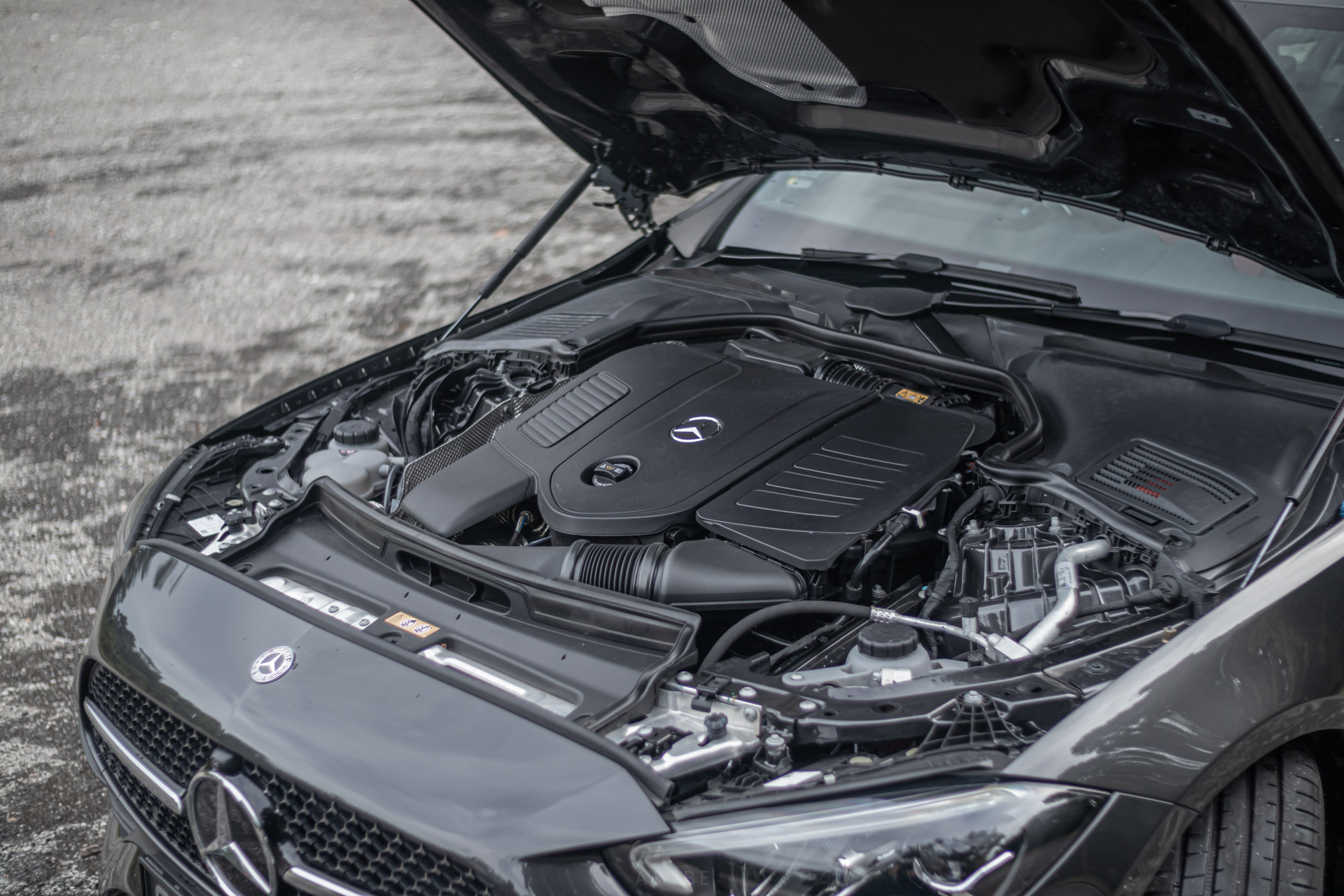 If this is your first time driving a car with rear-wheel steering like it was for me, the sensation can be a little trippy at first because you can feel the rear of the car turning along with you. You do get used to it pretty quick though and it definitely makes the car feel smaller than it is when navigating a carpark or when driving in town.

I feel like the new C-Class doesn't exactly do anything that's groundbreaking or revolutionary, but what it does very well is further refining an already refined product. The addition of the new MBUX system, electrification, and rear wheel steering really fires the C-Class into the modern world. 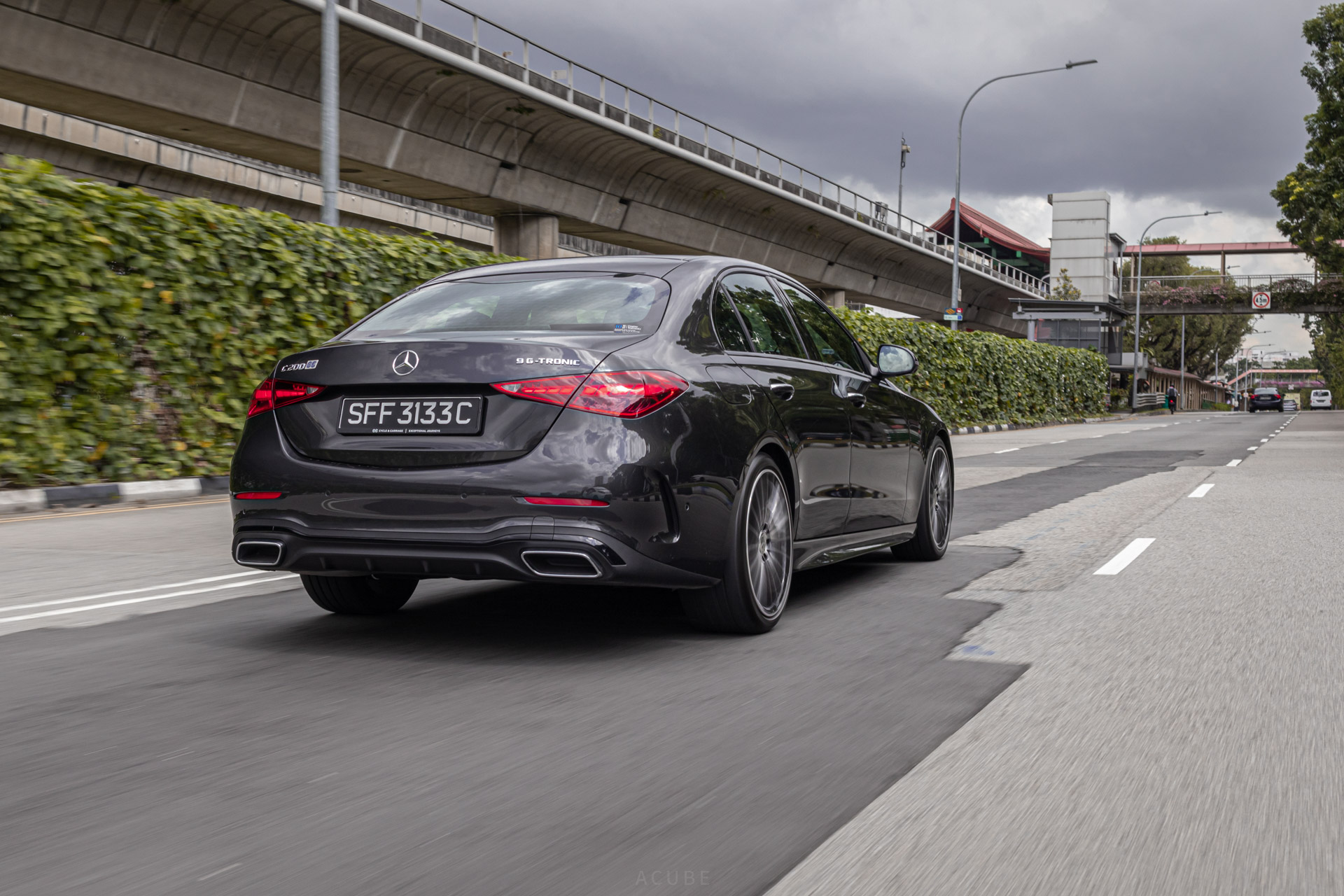 It’s easy to see why prior generations of the C-Class have become as popular as they are, and with all the upgrades Mercedes has blessed the W206 with, I have no doubt this latest one will continue that trend.

Read More: mReview: BMW 318i - Sometimes the Base Is Best