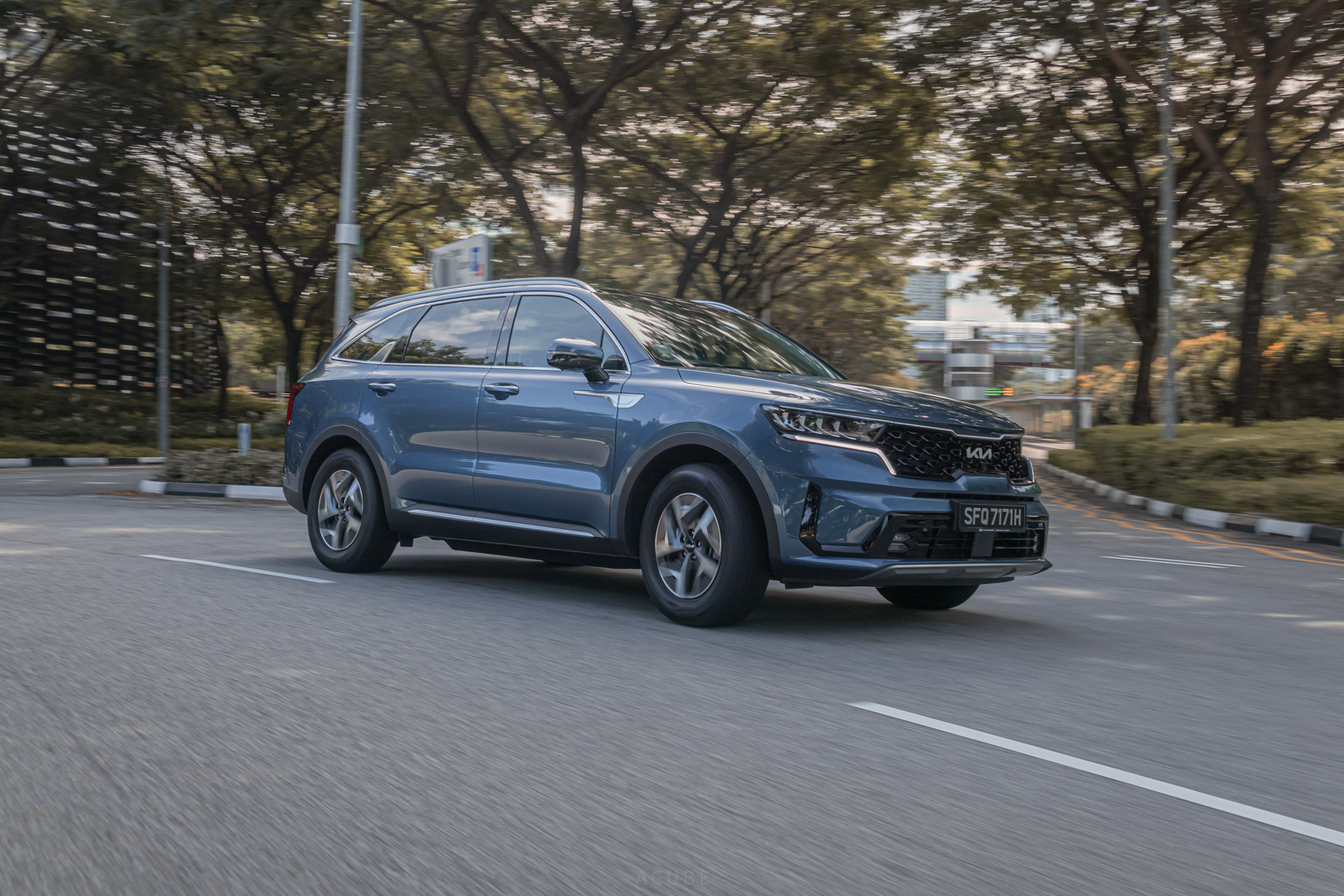 The Kia Sorento Hybrid reminds me of the first five seconds of The Simpsons’ “La-Z Rider” sketch (if you have never seen it, watch it here). But before you jump to conclusions, let me explain why.

But before we start the article proper, this version of the Sorento isn’t new; in fact we even tested the diesel variant last year. The nameplate was originally introduced locally back in 2007 as a petrol-only model. The second generation followed in 2009 with a petrol engine at launch, and a diesel was added to the lineup in 2013.

However, both were withdrawn after a year. Now, the current generation car was launched as a diesel in 2020, and for 2022, a petrol-electric hybrid has been added to the lineup.

While the previous generation Sorento featured the distinctive “Tiger Nose”, Kia has decidedly moved away from that design language, and what they have given us is, in my opinion, inspired by modern art. 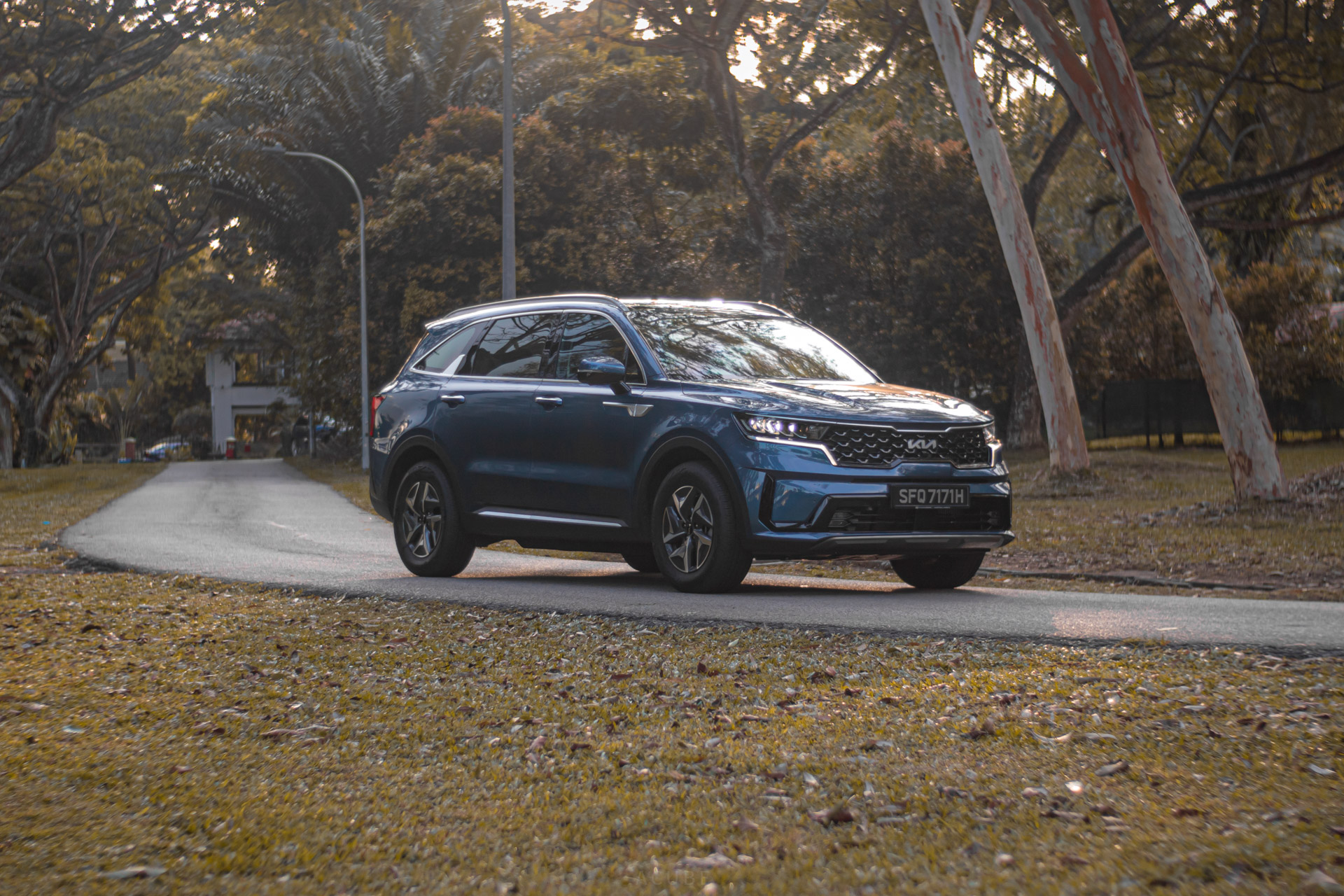 The body lines on the Sorento Hybrid are strong and angular, reminiscent of Robert Pattinson and his chiseled jawline. While some might feel this is quite a departure from Kia’s previous design language, this is, to me at least, how car manufacturers should be pushing the envelope on automotive aesthetics.

Not every car needs to have soft, rounded corners, and the Sorento shows how designers can still incorporate an edgier design into a car while still maintaining its widespread appeal. The headlights have quite a distinctive look to them, with four LEDs in each headlight cluster, a single LED strip for the daytime running lights, and fog lights in the lower part of the bumper. 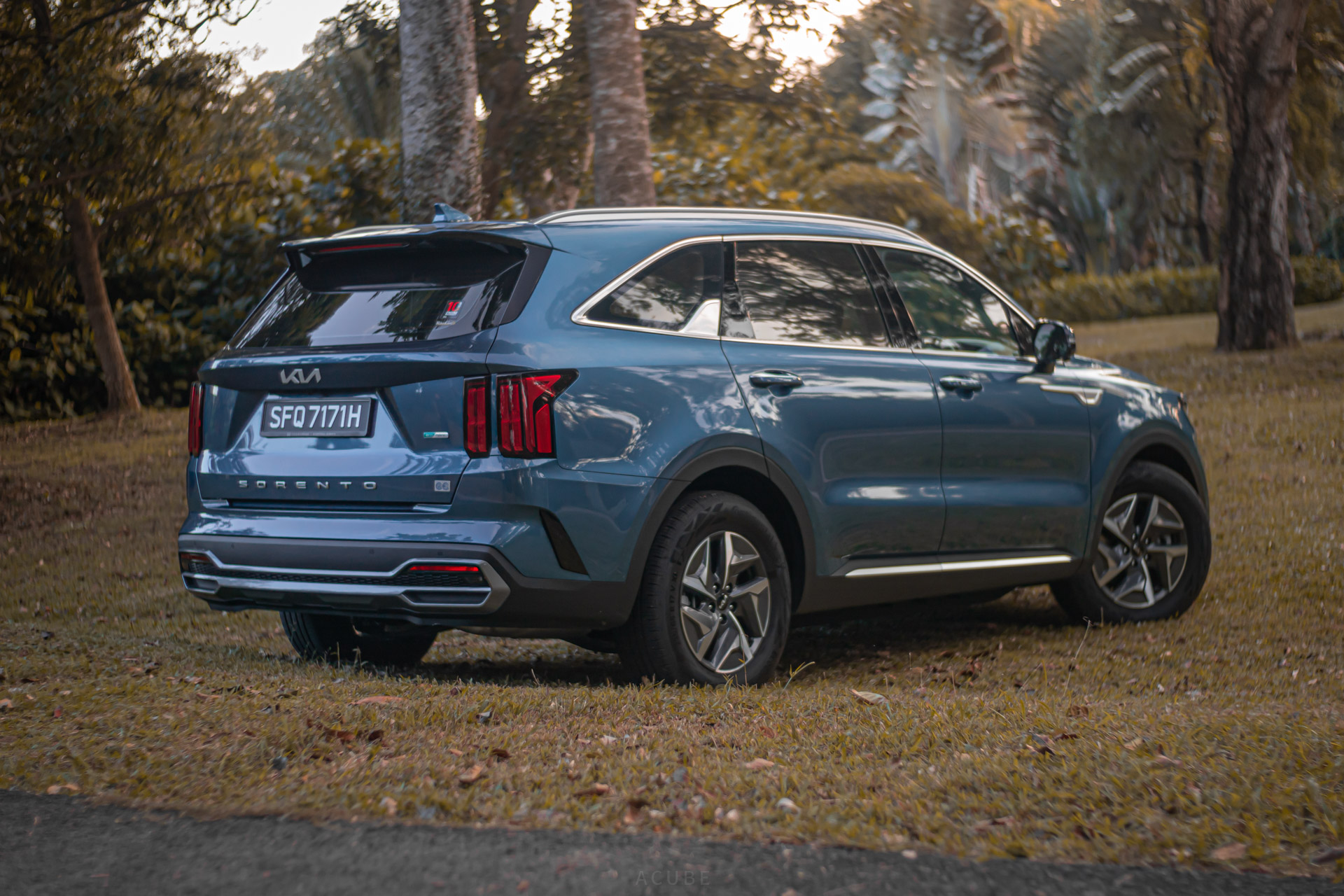 I personally appreciate what the designers did with the rear taillights. Two vertical clusters of lights on each side, with bright LEDs within. It is simple, clean and unfussy, while still playing into the overall theme of lines and creases.

If I had any gripes, it would be the wheels. A Sorento Diesel with the same trim level comes with 18 or 19-inch wheels, while the Sorento Hybrid only gets 17-inch wheels. Which given the large wheel arches, look rather inadequate. And the uninspiring design of the wheels themselves don’t compliment the overall look of the car. 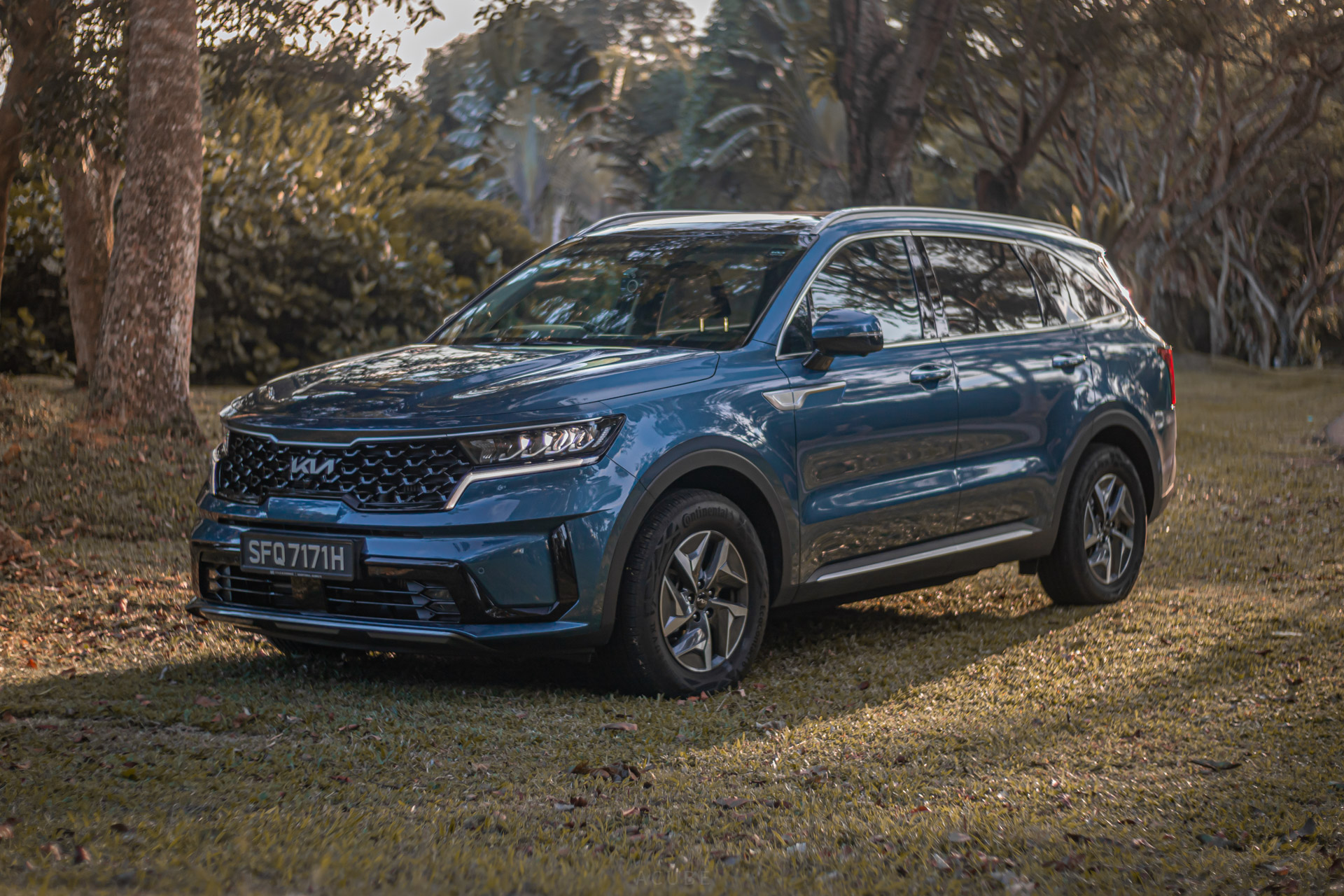 Realistically speaking, you can always remedy this by swapping out for a set of aftermarket wheels.

Well, mostly a mix of black leather, gloss plastics and trim pieces. To break up the monotony, Kia added splashes of silver trim, and criss-cross faux-metal trim on the doors for contrast. 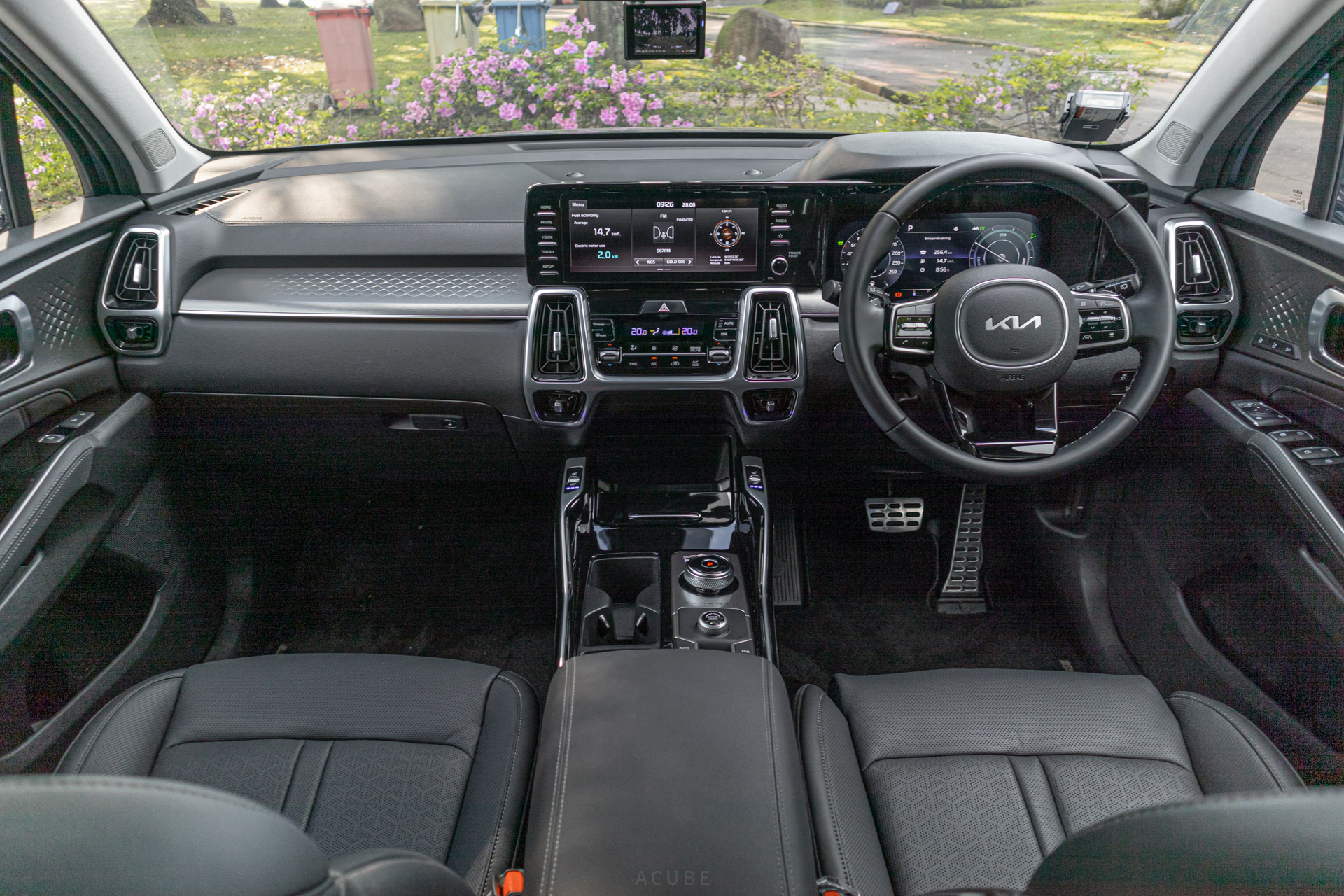 The seats, steering wheel, arm rests and dashboard, were pleasant and soft to the touch. But you already expect that in a car like this, don’t you? What the Sorento Hybrid does wonderfully is just how comfortable it is, and how calm it makes you feel, whether you are driving it or a passenger.

The front seats are wide, comfortable, and they were heated and ventilated! I don’t know if anyone will ever use the heating function in Singapore, but I had the ventilated seats on every time I was driving, and I truly wish more cars had it as standard equipment. The front seats are also electrically adjustable and come with memory settings, which is useful if your family has multiple drivers using the same car, because it adjusts both the seating and mirror positions.

It’s just as spacious in the rear seats as in the front seats. While the second row doesn’t have heating and ventilation (that’s only available in the seven-seater Kia Carnival), three people can fit without feeling cramped. The floor is flat, which means more leg room for the middle passenger. The second row of seats can also be adjusted forwards and backwards, as well as reclined. 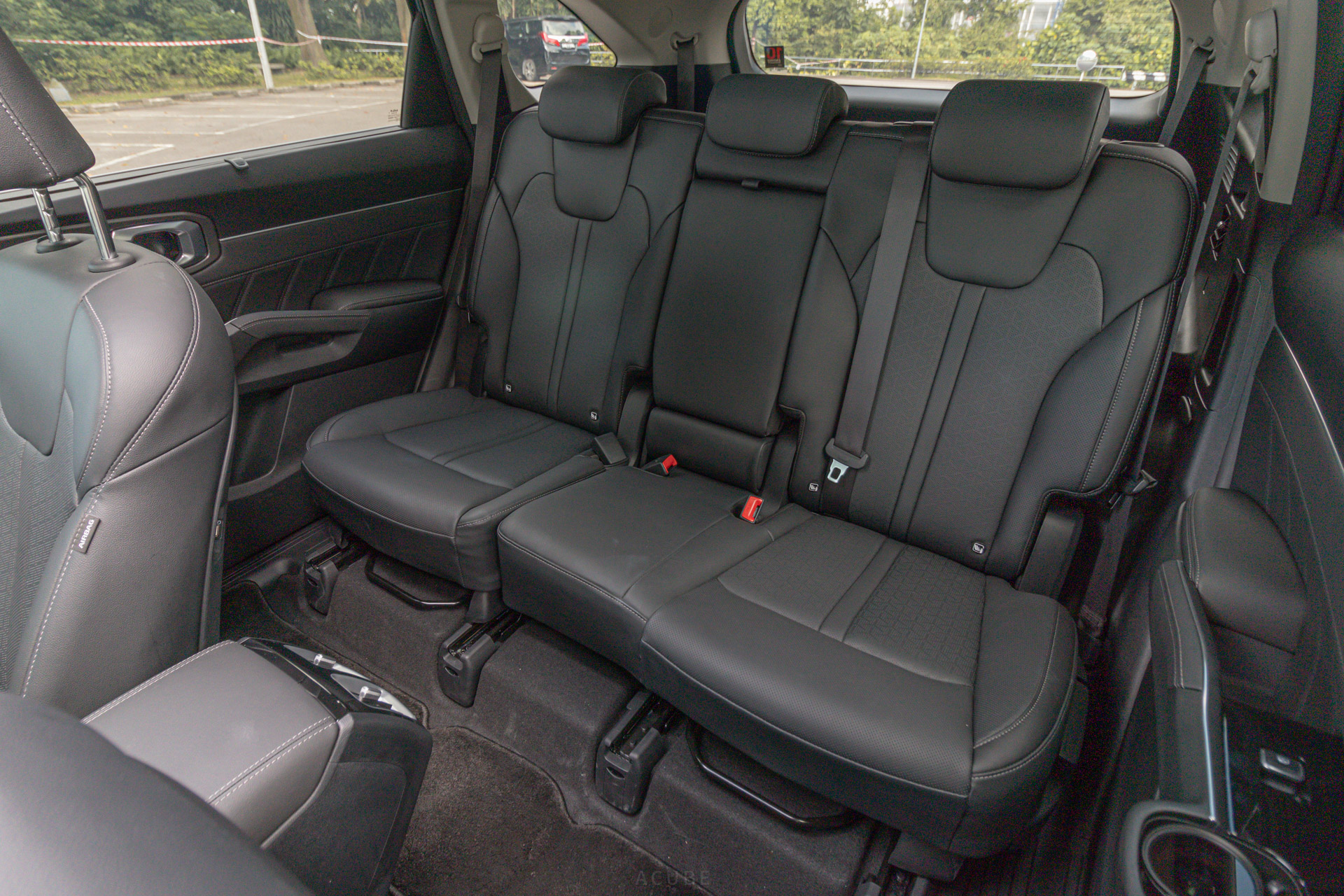 And there is sufficient space in the third row too. I had a taller-than-average colleague sit back there in relative comfort. As headroom was just about sufficient for him, he was still comfortable even after spending over an hour back there.

Besides the generous headroom in the cabin, there are other features to increase cabin comfort. The panoramic sunroof can be opened (at least for the front half), together with a retractable canvas. On a bright day, having that panoramic sunroof really adds a great sense of airiness to the cabin, and is the second best feature in the Sorento Hybrid after the ventilated seats.

With the third row up, boot space does drop to 187 litres, which is still enough for some bags and groceries. With the third row down, it increases to 812 litres. Knock down the second row, and you get a cavernous 1996 litres of space. Short of a small van, this is just impressive. 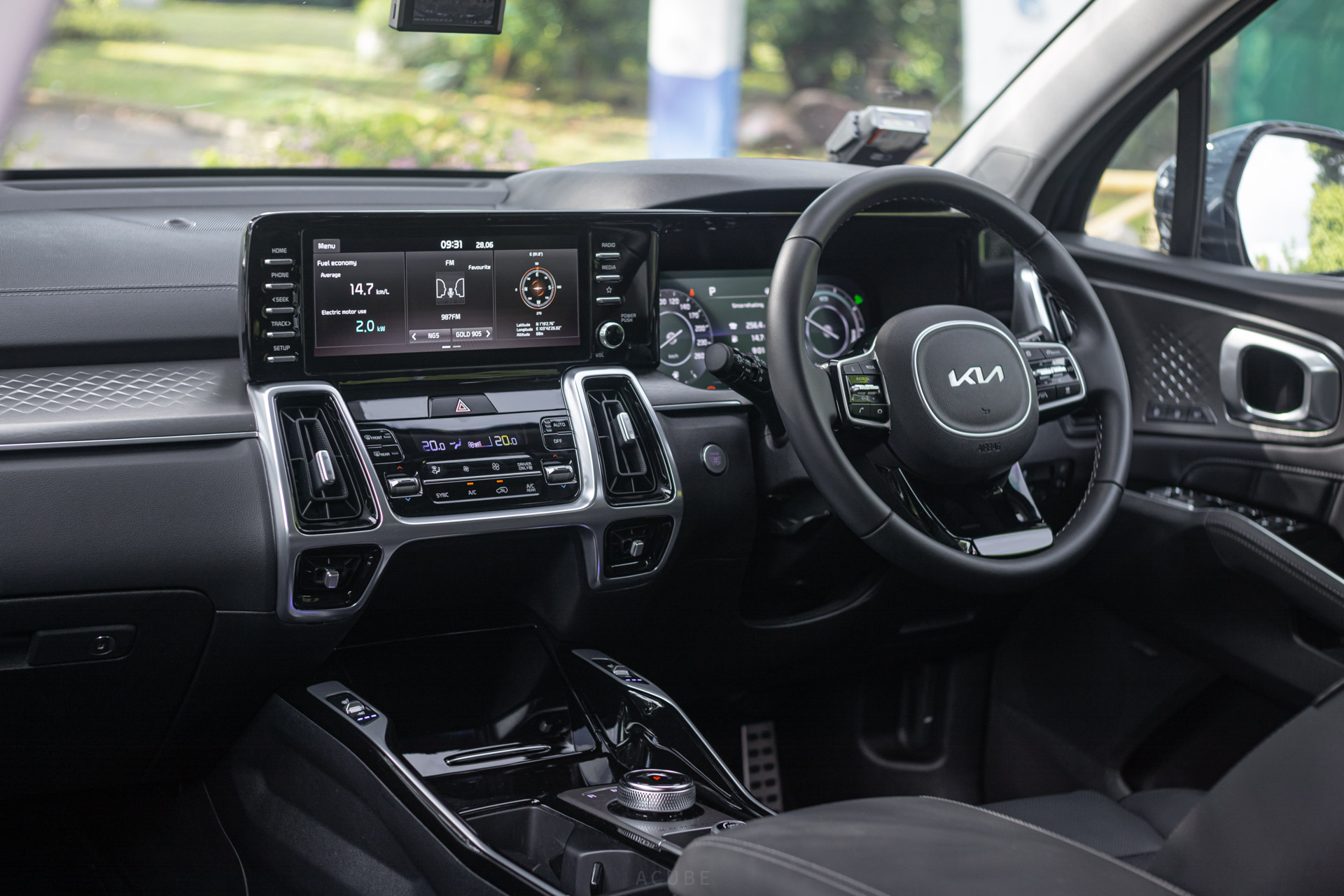 There are also buttons on the side of the boot to knock down the second row of seats with ease, which means you only have to physically raise the second row after they are lowered. The front passenger seat also has buttons on it to move the seat forward and backwards, or to adjust the angle of recline. Add to that, multiple USB ports (we counted six of them, including two in the third row), two of which are in the back of the front seats, which makes for easy charging of our mobile devices.

So, How Does It Drive?

I wouldn't say the Sorento Hybrid shrinks itself around you or feels smaller when driving it,  because it doesn’t. What it does do is make itself known to other road users with its size and presence. You tower over the lesser cars around you (you know who you are). 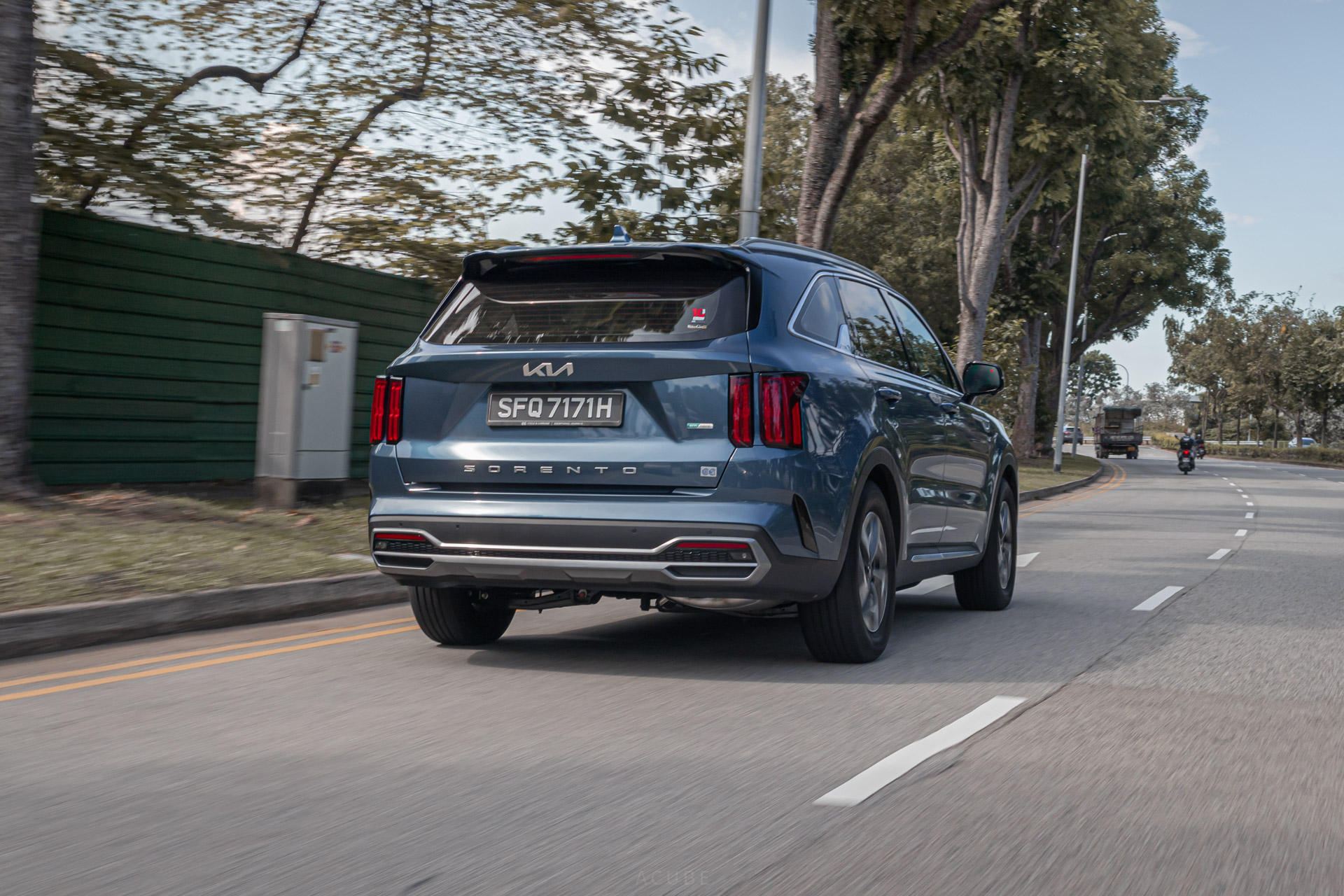 But this size can be a con in confined spaces, especially older carparks. But don’t worry though, for the Sorento Hybrid has an ace up its sleeve - a competent 360 degree camera system! It even allows you to even select individual cameras on specific spots of the car so that you can avoid adding to the collection of wall marks in said carparks.

Powering the Sorento Hybrid is a 1.6 T-GDi HEV engine, which in layman terms is a turbocharged 1.6-litre engine with hybrid assistance, with power figures of 230hp and 350Nm of torque. Yes, this 1.8 ton SUV has a 1.6-litre engine, and it can still accomplish the century sprint in 8.8 seconds. 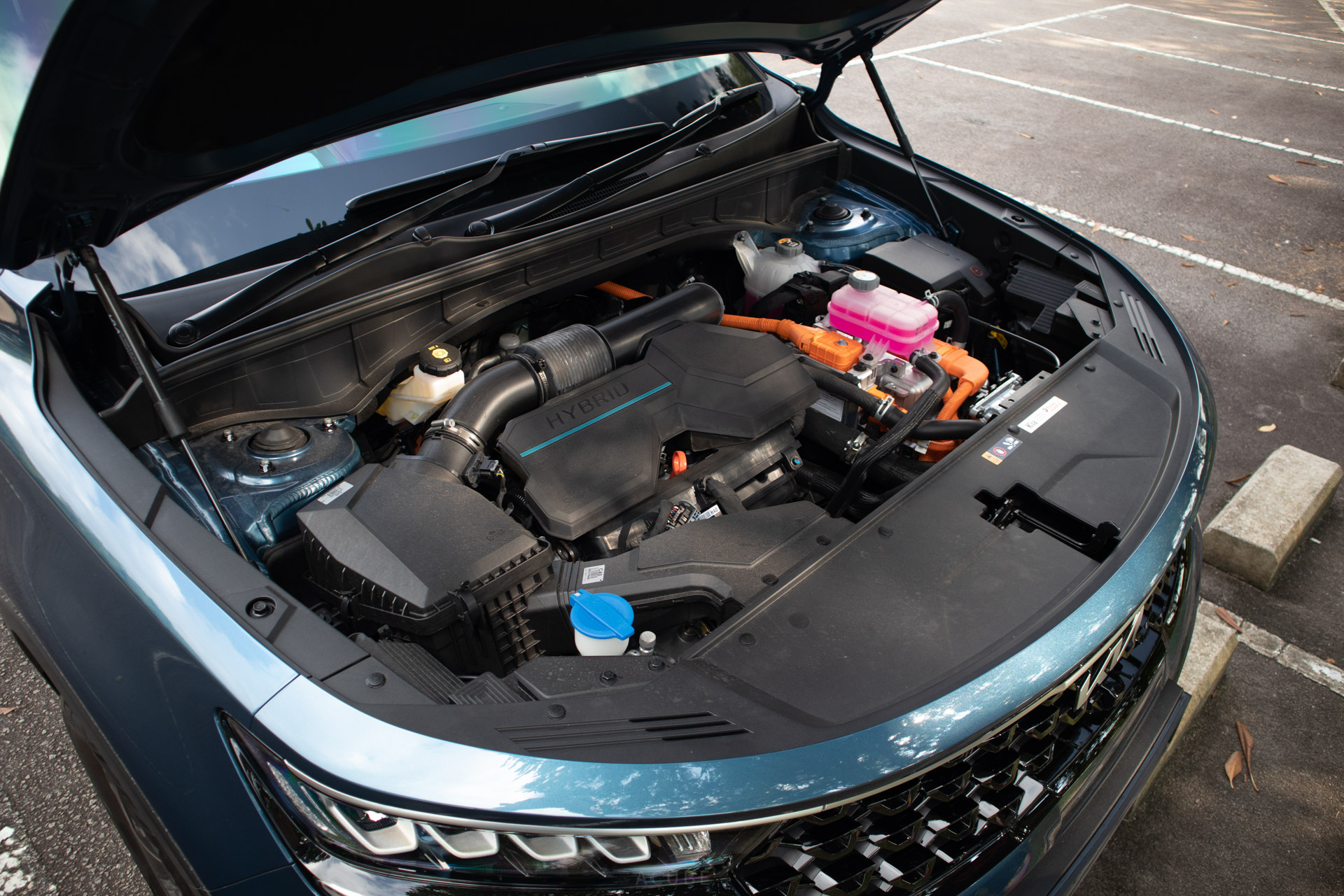 Plus, it will do all that while still returning great fuel economy. Kia claims 5.4l/100km, or 18.5km/l, while I managed 6.67l/100km, or 15km/l. Then again, I did drive it a little harder than an owner typically would. With a more gentle driving style, I don’t doubt the possibility of achieving the claimed economy figures.

Power is sent to the front wheels via a six-speed torque converter automatic transmission with no manual override. Shifts are smooth, and while the kickdown isn’t the quickest when the accelerator is depressed harder, it is still more than sufficient for daily driving duties. There also isn’t a gear shifter, instead you select gears with a rotary dial, which may seem weird at first, but feels normal after a while. Plus, it also has the added benefit of making the cabin design look more minimalist.

While there is a smaller rotary dial to select your drive mode, just leave the Sorento Hybrid in its normal settings and drive off. There isn’t a point driving this car aggressively, as it is not set up to do so. Yes, the petrol engine will kick in earlier should you want to accelerate hard from a stop, but if you accelerate normally, you’ll start off quietly with the electric motor, before the petrol engine kicks in around 40 - 50km/h. 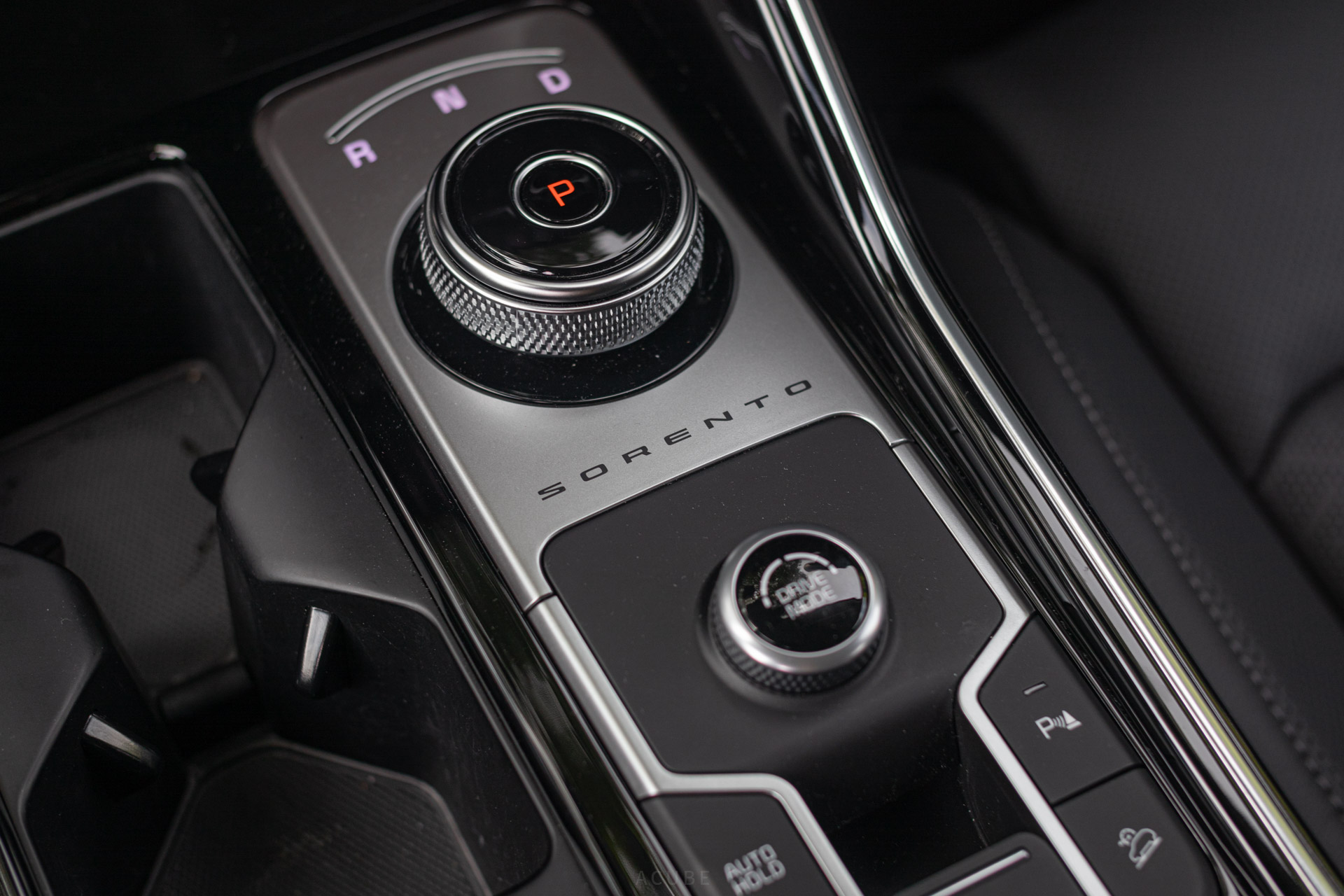 I even managed to keep the Sorento Hybrid completely in electric mode for an extended period while driving gently and keeping it below 50km/h.

What you will enjoy from the Sorento Hybrid is its ride quality. Kia has set it up with soft suspension and good dampening, and I made it a point to test it out at every opportunity I could. I was actually surprised how well it soaked up even the worst of the bumps, lumps and undulations in the road, which could also be down to the tyres. At 235/65/R17, the sidewalls are pretty thick, and that definitely helped to soak up the bumps in the road as well. 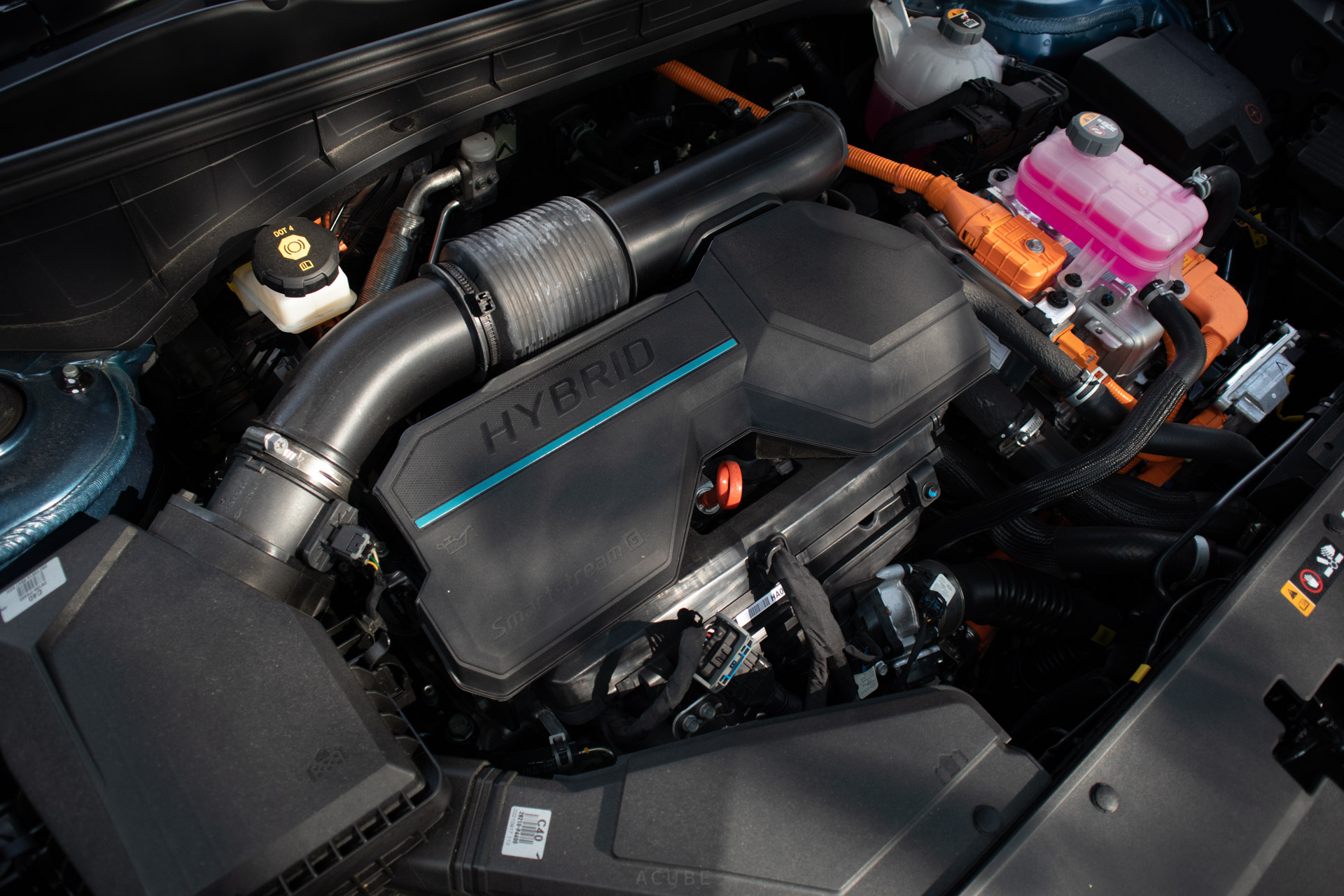 The brakes don’t have the most feel to them, but are easy to modulate and have decent stopping power. Again, the Sorento Hybrid is not a car you should be driving aggressively, especially with its high centre of gravity and soft suspension setup, but for city driving, the brakes do their job sufficiently.

The Sorento Hybrid is not lacking in technological features, which help to make driving it rather stress-free, and safer overall too. With a safety suite that includes Forward Collision-Avoidance Assist, Lane Keeping Assist, Surround View Monitor, Blind-Spot View Monitor, Smart Cruise Control, not to mention seven airbags, it’s as good as it gets. 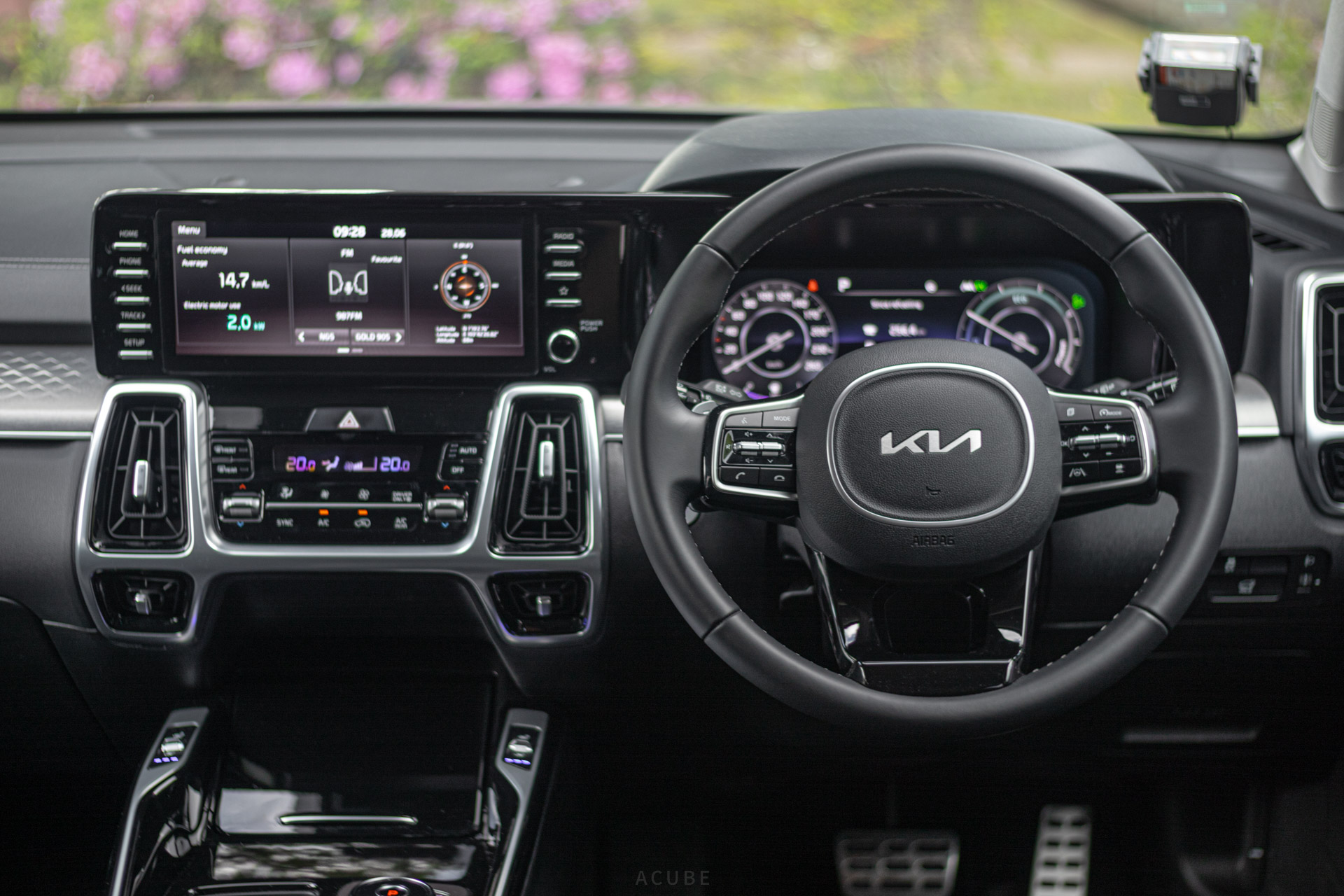 In my opinion, the Blind-Spot View Monitor is one of the best features on the car, with a camera mounted on each wing mirror showing a live video feed of the road behind you whenever you activate your signal lights, and I truly hope that this function will become more widespread.

The infotainment system is a 10.25-inch touchscreen with Apple CarPlay and Android Auto, which is intuitive to use. There are also physical buttons for various functions like radio, phone, track changes and the volume, which makes operating the infotainment system a breeze even when on the move.

The Sorento Hybrid’s well thought out suspension setup is why I related it to the La-Z sofa sketch from The Simpsons. With its levels of comfort and serenity, I’m surprised I didn’t actually try living in it when I had it on test. But that’s not the only thing the Sorento Hybrid has going for it. 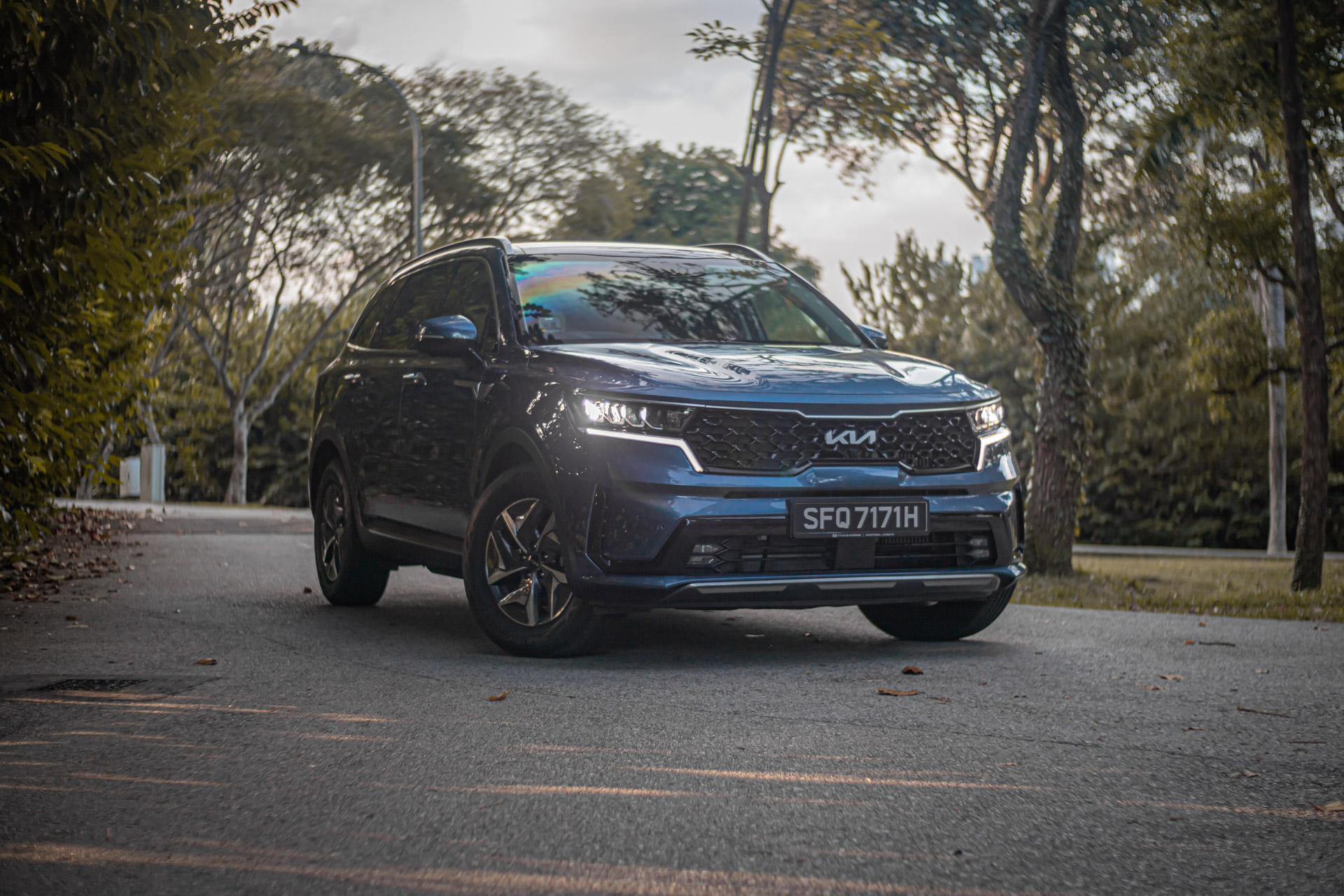 Besides its sister car, the Hyundai Santa Fe Hybrid (which is built on the same platform as the Sorento Hybrid), where are you going to get another SUV like this? Not the Japanese manufacturers, that’s for sure, and the European manufacturers will charge through the teeth for a car like this (I’m looking at you, Stuttgarters and Bavarians).

Granted, the Sorento Hybrid isn’t the cheapest out there, but then again, where can you get this amount of technology, features, and space, for its price?