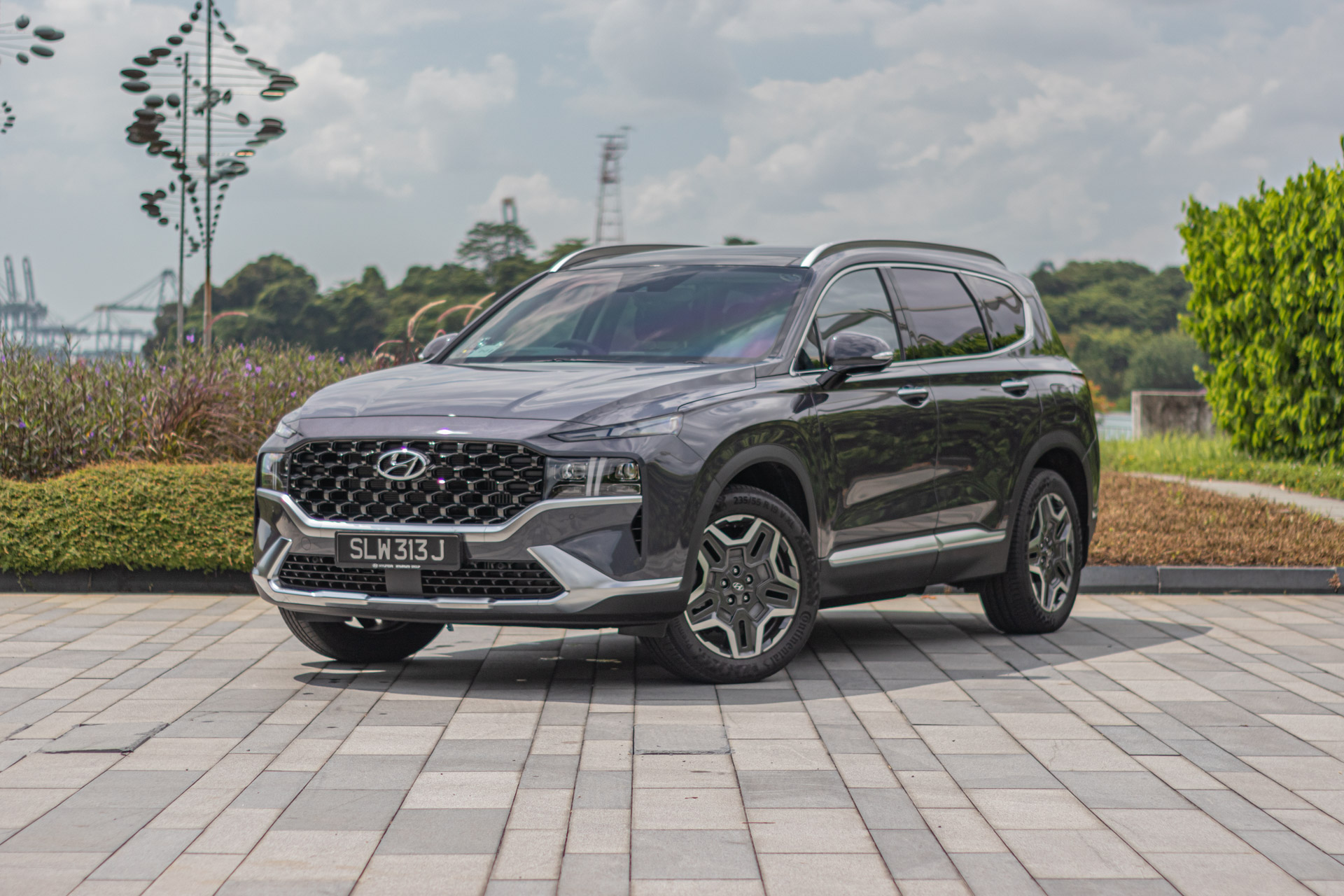 Most of us will associate the Santa Fe nameplate with the reasonably-priced, noughties precursor to the crossovers that we know and love today.

At the end of the first generation’s production run though, Hyundai opted to upsize the car, squarely putting it in the firing line of a whole host of offerings from Europe and Japan, albeit in a package that was not only more affordable but better equipped too.

What’s In A Santa Fe? 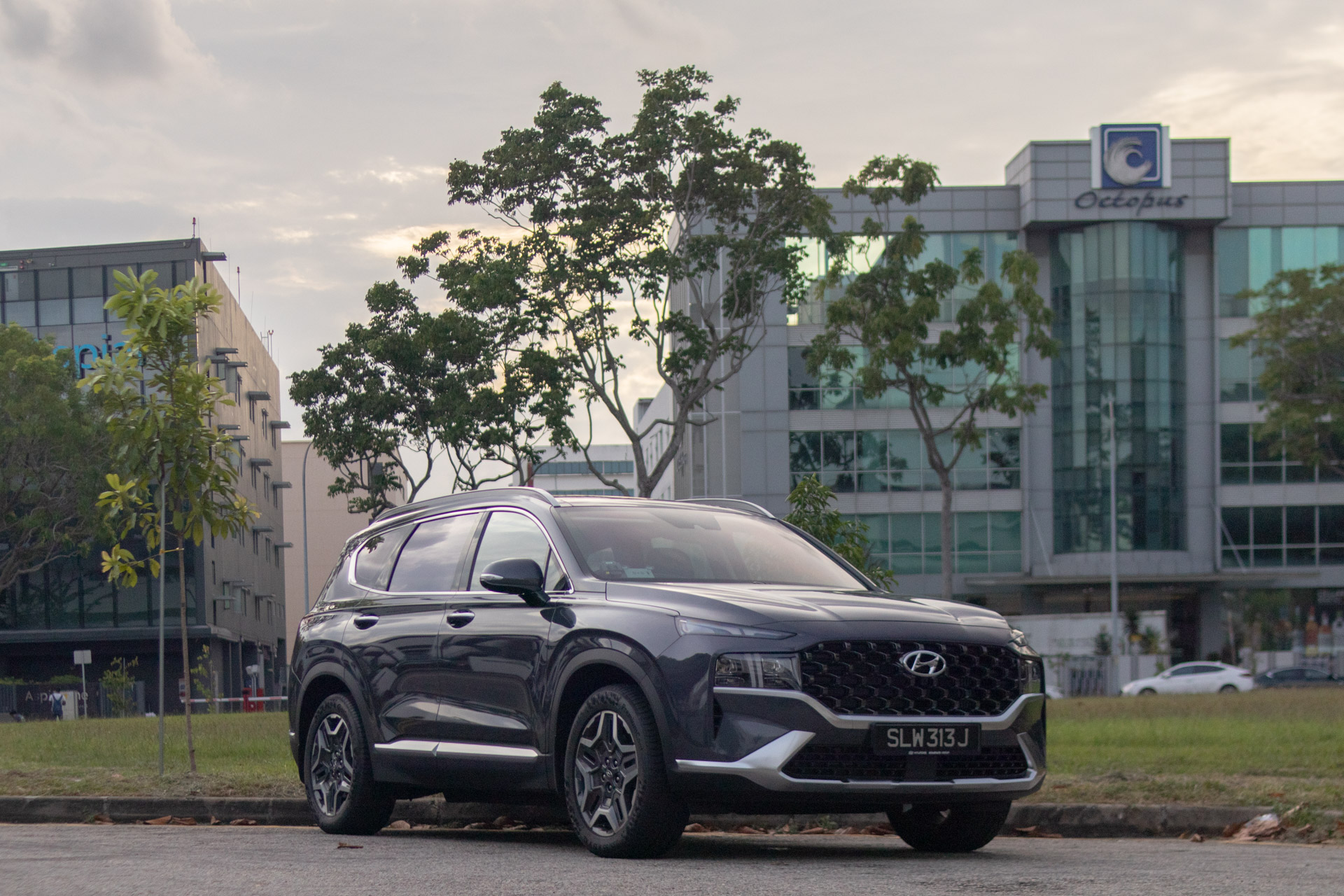 In a nutshell, it is a large seven-seater SUV that has been equipped with all the bells and whistles you’d ever want, or need, in a car, especially in a local context.

Very much unlike the cars that preceded it, the new Santa Fe is built better than ever before, out of materials that would not have looked out of place in a car at a much higher price bracket.

This Santa Fe is actually not an all-new car, but it might as well have been one. Facelift it may be, but this is much more extensive than just a mere nip-and-tuck. Hyundai actually switched platforms as part of this mid-life refresh, for a more modern N3 platform that also underpins the Hyundai Tucson. 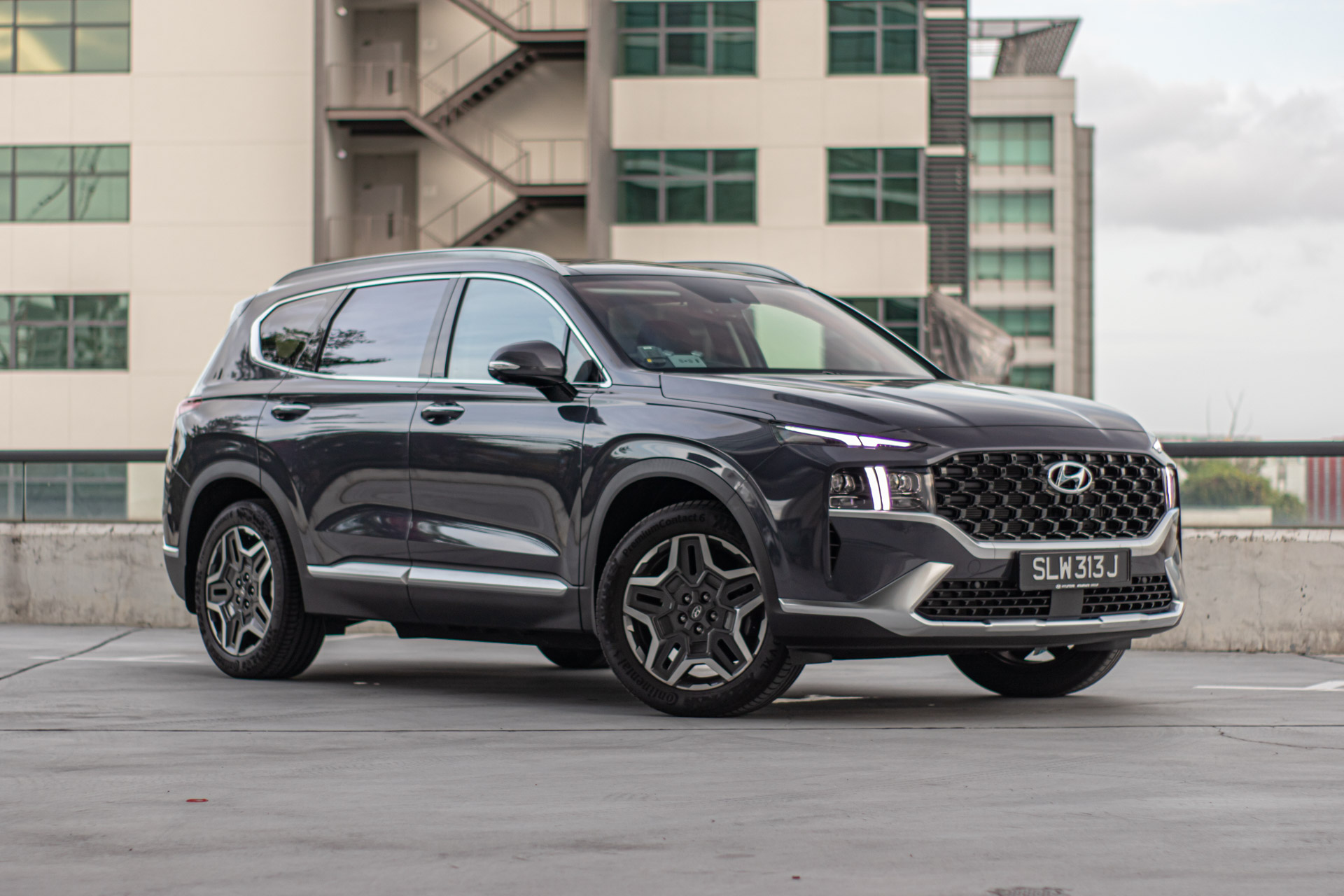 Dominating would probably best describe the front fascia of this facelifted Santa Fe. A big silver grille stretches almost the width of the car.

As with the Kona, Hyundai has opted to split the front light clusters into two separate units, with a slither at the bonnet line serving as part of the indicators and the horizontal portion of the car’s DRLs.

The bottom light units help round off the front grille and contain the vertical element of the DRLs, to create a unique ‘T’ shaped light pattern. This assembly also holds the main beams and the fog lights. 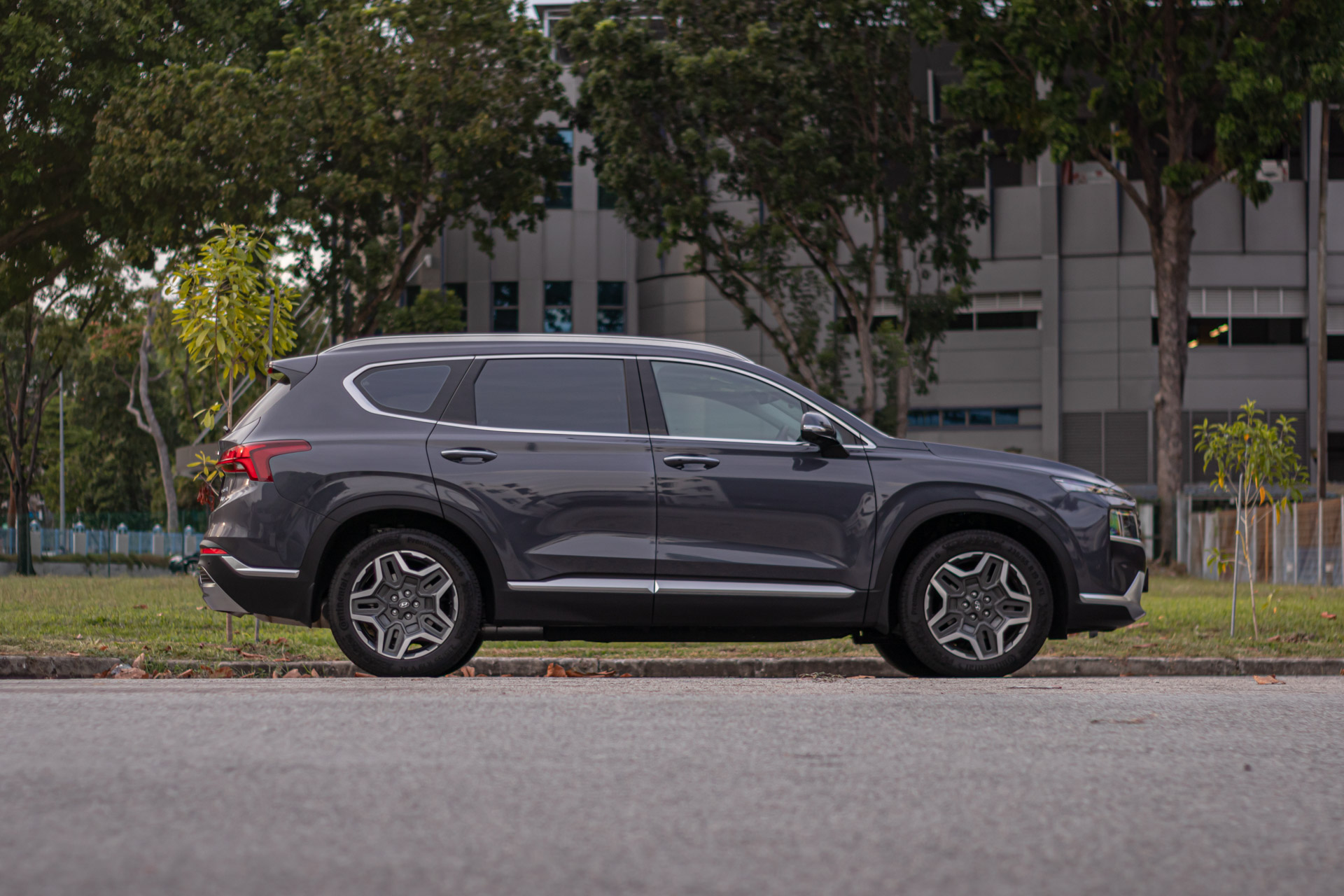 The front fascia also sports strong chrome-accented details that really help add even more assuredness to the visuals of the vehicle.

This almost-masculine theme carries on throughout the vehicle, with plenty of metallic accenting adorning the sides and the rear end of the vehicle. 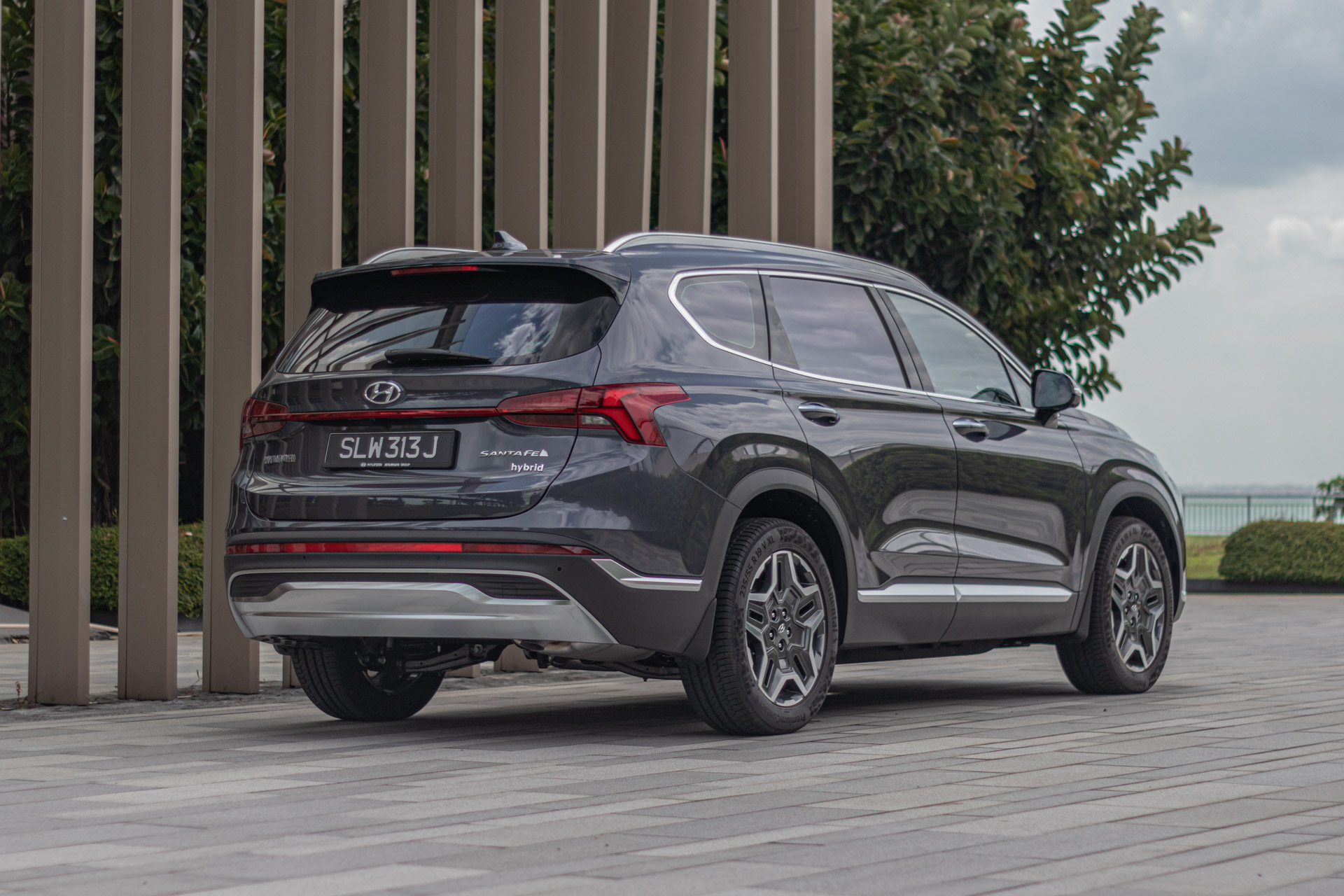 Whilst space is in no short supply up in the cabin, it’s clear that this car is best enjoyed from the middle row. The seats can be shifted rearwards, with the seatbacks reclined to create an almost-limo-like experience in the back.

The denim-inspired headliner, copious use of soft-touch materials, and the massive glass roof all help to create an experience that you’d probably only get to enjoy on cars costing significantly more. 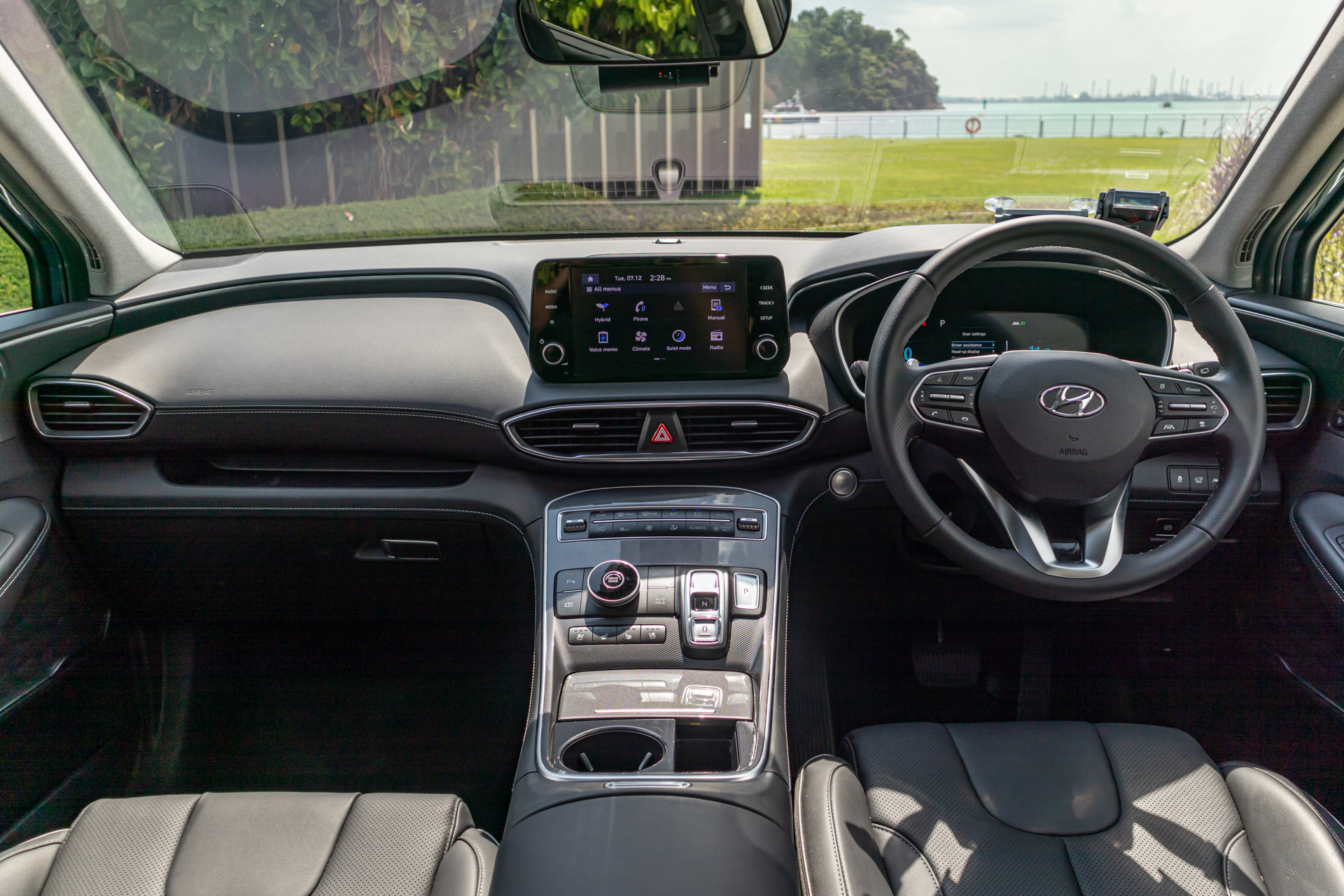 Upfront, it's buttons galore in the centre console, though it is a decision that we welcome. Granted, there are options that can only be accessed through the infotainment screen, but the vast majority of the controls that you’d use on a daily basis are all logically laid out on this faux-carbon-effect centre stack.

The drive mode toggle proudly lives on this bit of the vehicle and is easy to access. However, it is also within easy reach of the passenger - this can be a problem if you have a hyperactive toddler in tow. 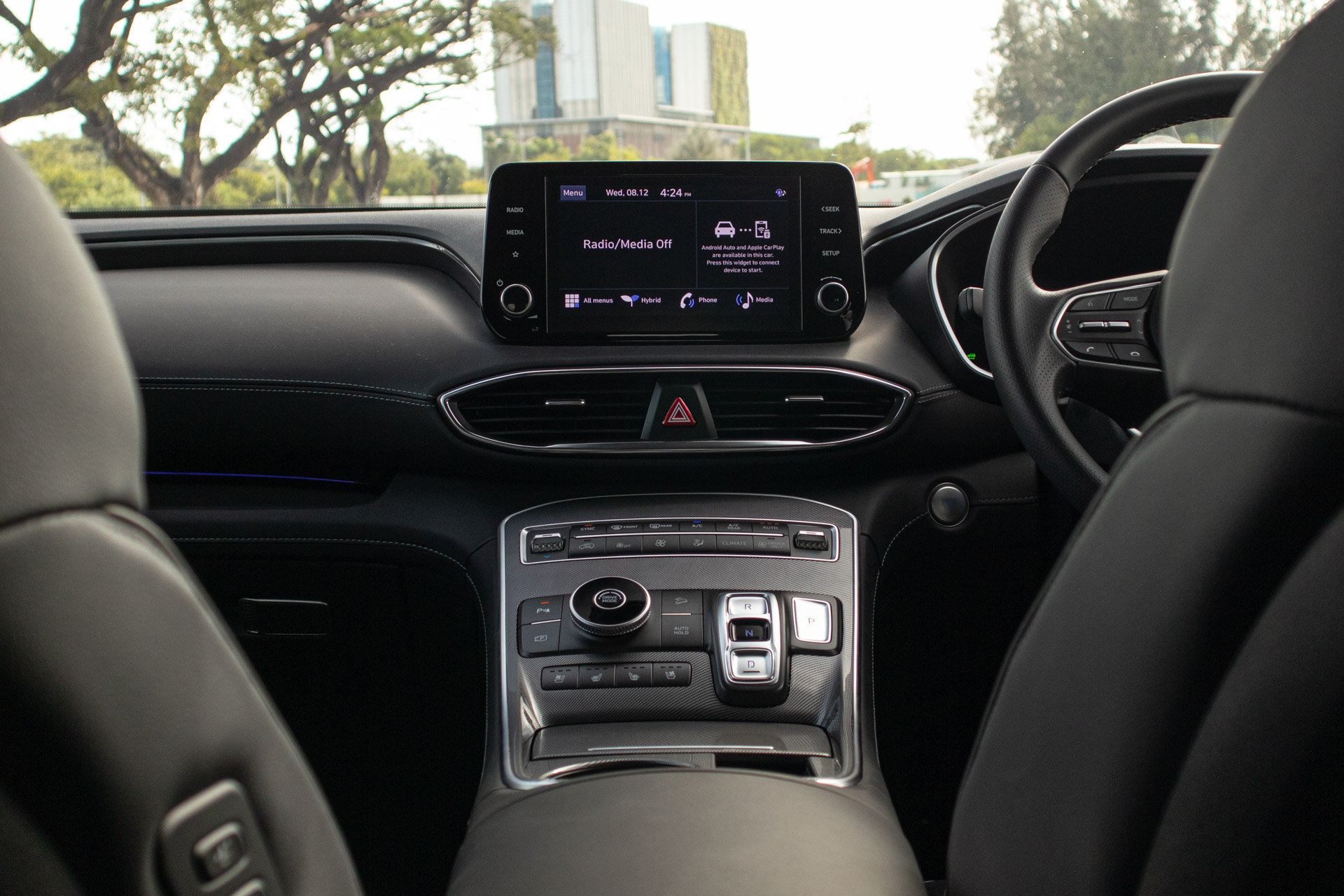 There is enough luxuries upfront too. Hyundai has fitted these seemingly infinitely adjustable seats for the driver and front passenger, which have been made of some exceeding plush foam and leather for maximum comfort.

Insufficient? Try heated and cooled seats on for size - your core will never be too warm or cold again, regardless of the cabin temperature. 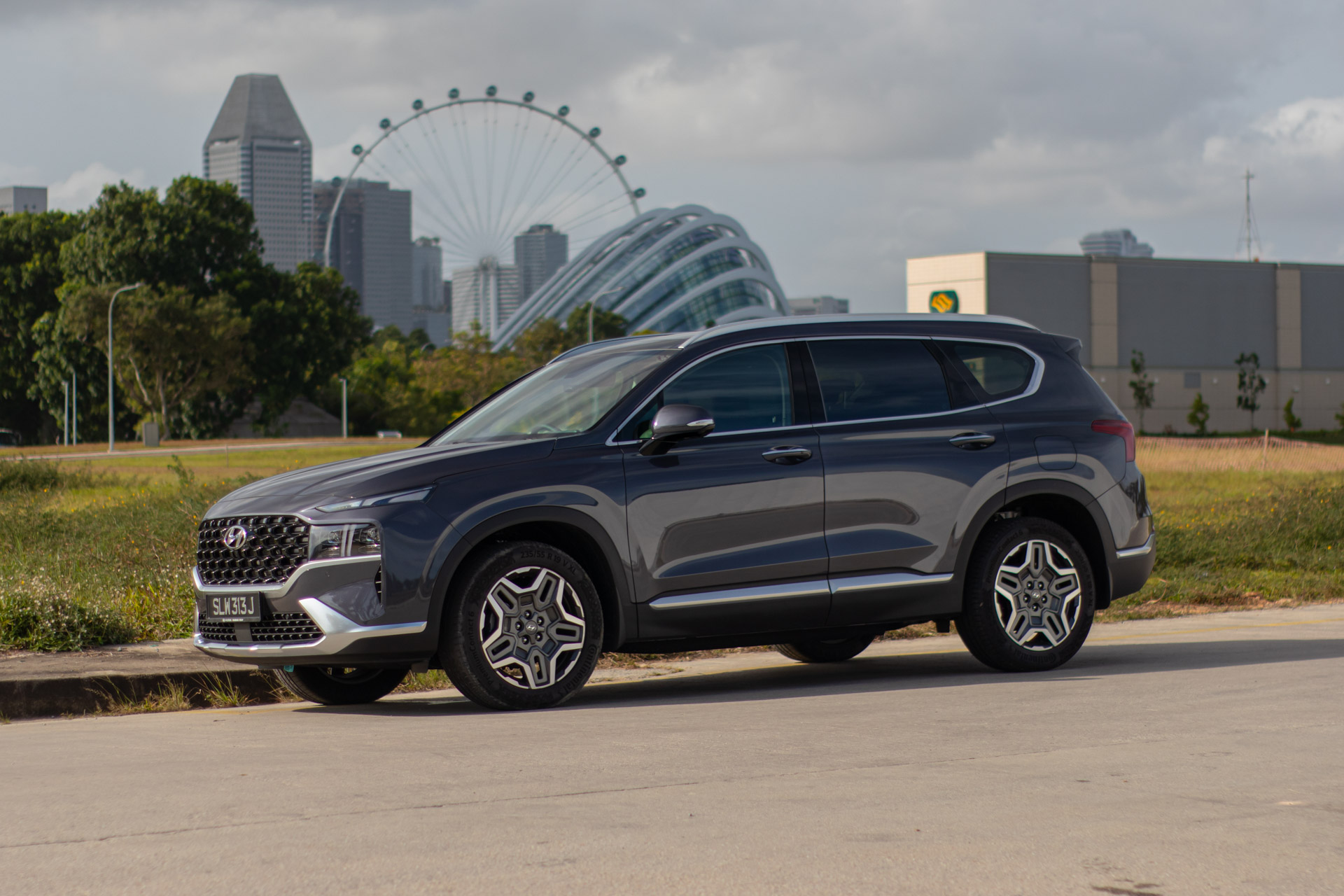 It is worth noting though that the last row seats are perhaps really only suited for occasional use. The rear floor is exceedingly high, possibly owing to the fact that the battery and fuel tank requires a set amount of space underneath the metalwork.

The car continues to impress on the driving front. To be clear, there's no hiding from the fact that this impressive behemoth weighs (more than) a literal ton, and no amount of brute power will be able to make this vehicle feel spritely off-the-line.

However, once on the move though, the car's ever-ready waves of torque lulls you into believing you're in a vehicle that is much more compact. Overtaking is a breeze in this car, probably as a) there's always grunt on tap, and b) you're in a big SUV and people naturally jump out of your way. 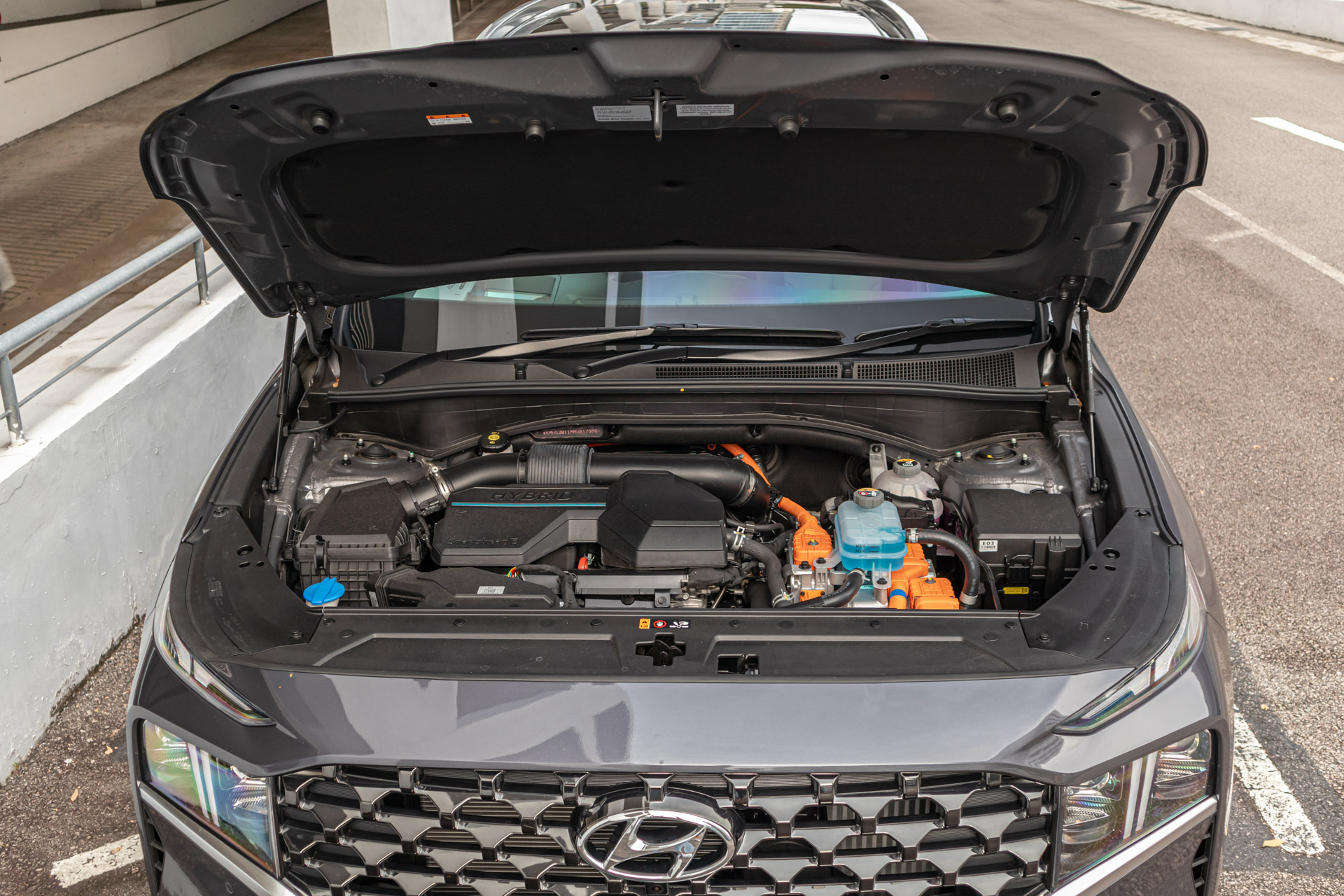 It feels like the car is actually fairly softly sprung, but with stiffer dampers which help to mitigate any unwanted oscillations that may result.

You will not find a scenario in day to day driving that will cause the car to rebound and/or rock about - this is a well-sorted and comfortable-riding vehicle that punches significantly above its weight class in the ride quality and user-experience department.

The traits of the mechanical components and the excellent visibility means this is a car that feels and drives a lot smaller than it actually is. 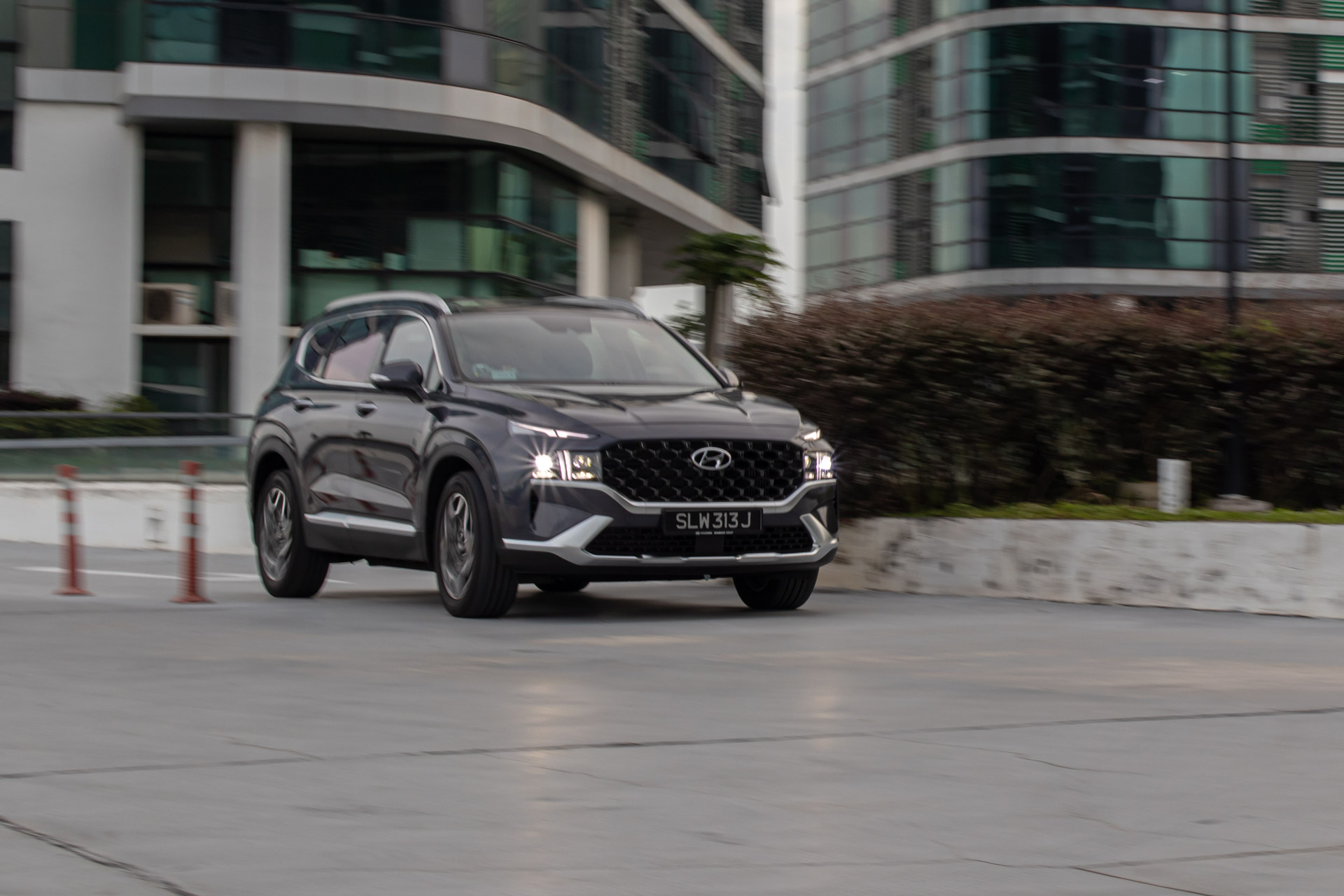 There's plenty of power assistance in the steering rack, which means there isn't any legitimate sharpness that you'd enjoy on a twisty road.

The Santa Fe experience is, therefore, best sampled with measured approaches to driving inputs, for a smooth, magic carpet-esque experience.

Despite its heft, we managed a rough 7.5km/l, which is commendable, as despite having an efficient turbocharged engine and a hybrid powertrain, this is still a car that weighs almost two tons.

Its butch looks and sheer exterior size may be intimidating initially, but that's really just that. There's no real malice beneath its skin - if the Santa Fe was absorbing, hard-copy literature, you really shouldn't judge it by its cover. 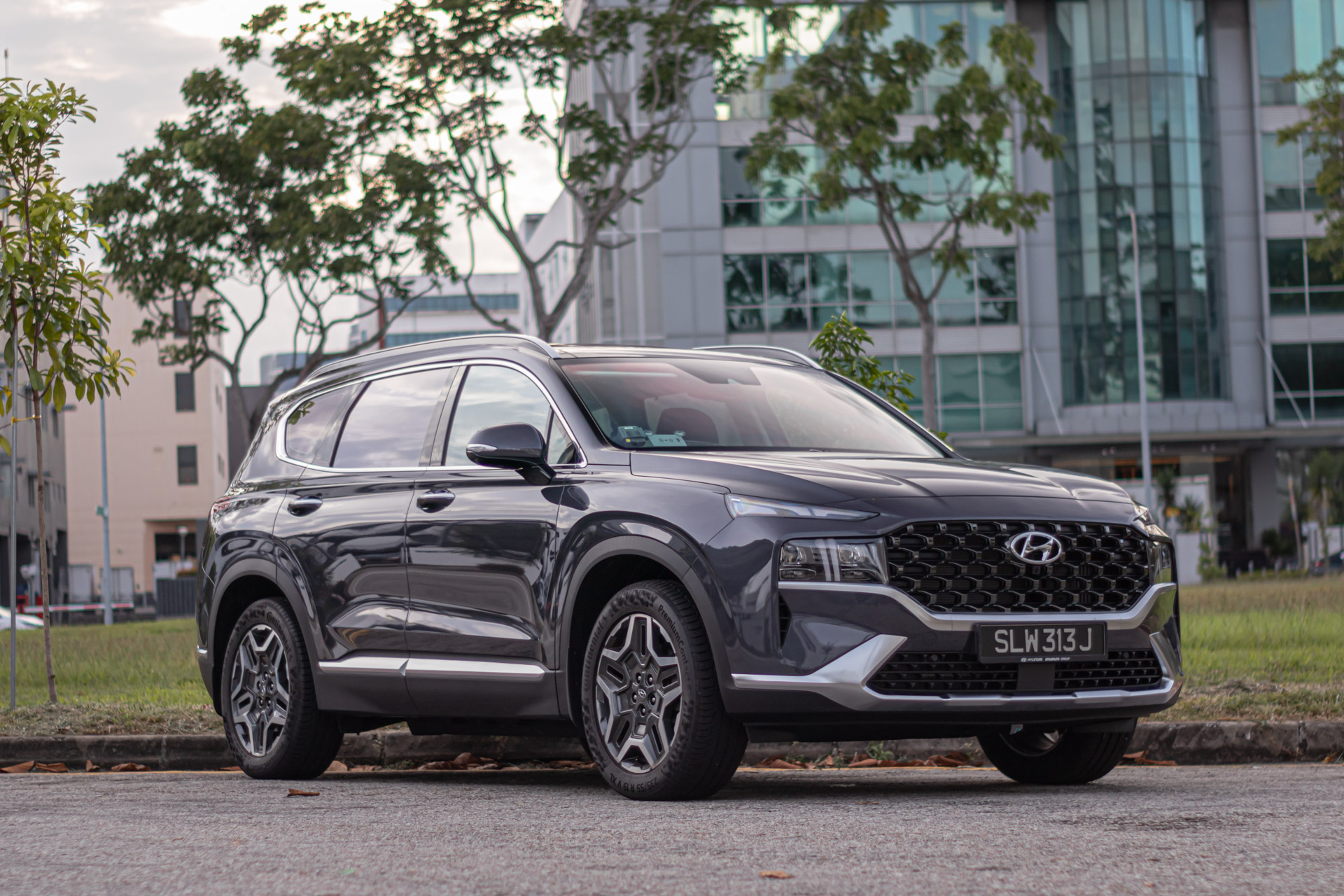 Good visibility, as well as a virtual 360-degree camera, paired with easy-to-use controls, mean that this is no harder to drive than your garden variety crossover. If you're bored of your typical enlarged Japanese luxury MPV, and a Germanic saloon just wouldn't cut the mustard for you, a Santa Fe, and its larger Palisade stablemate for that matter, are really compelling buys that present much better value!