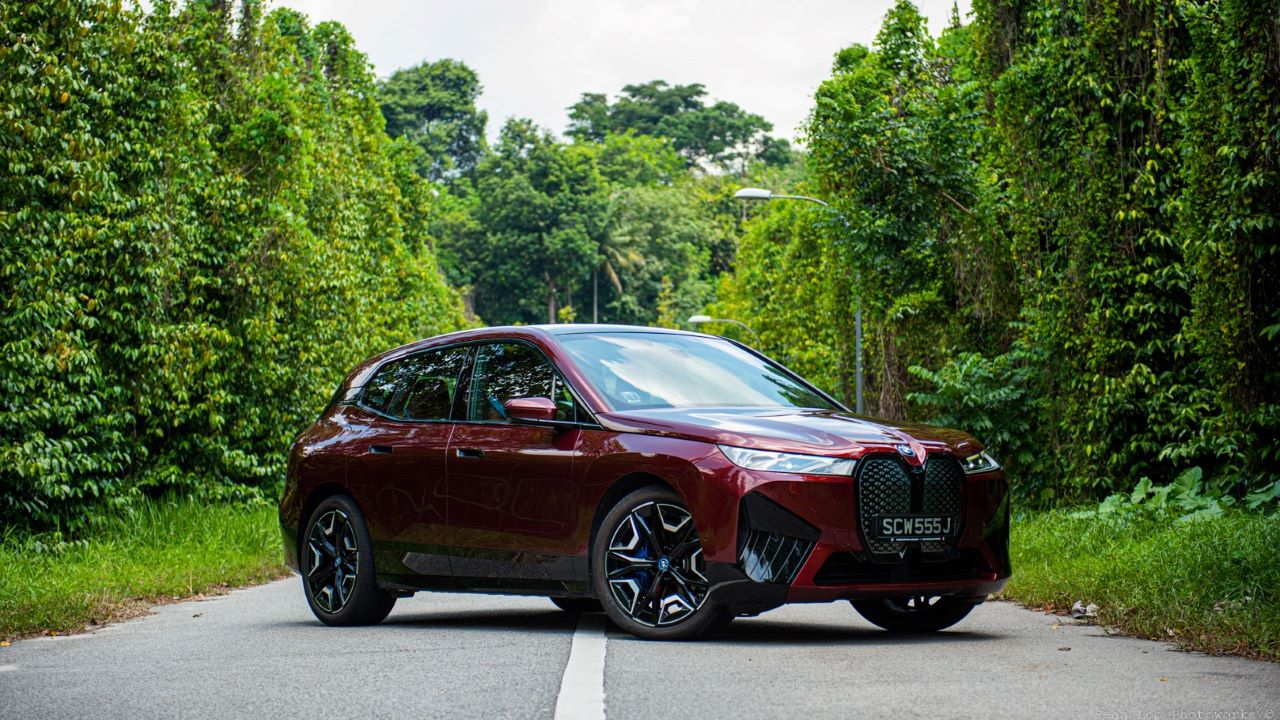 BMW’s new flagship EV offering throws their hat into the ring of the many fast, tech-filled, and futuristic EVs on the market. But the iX has plenty to make it stand out from the crowd.

Fear it. Dread it. Run from it. Destiny still arrives. In this case, destiny is less finger-snappy than the quote’s origins but it still refers to an unavoidable eventuality. We’ve known for a while now that the death of the ICE is close at hand and we now live in a strange crossover period between the outgoing dino-juice machines and the incoming electrics. While brands are delivering their eulogies and last hurrahs, they simultaneously push out and populate the market with the latest in EV technology and the iX is no different. 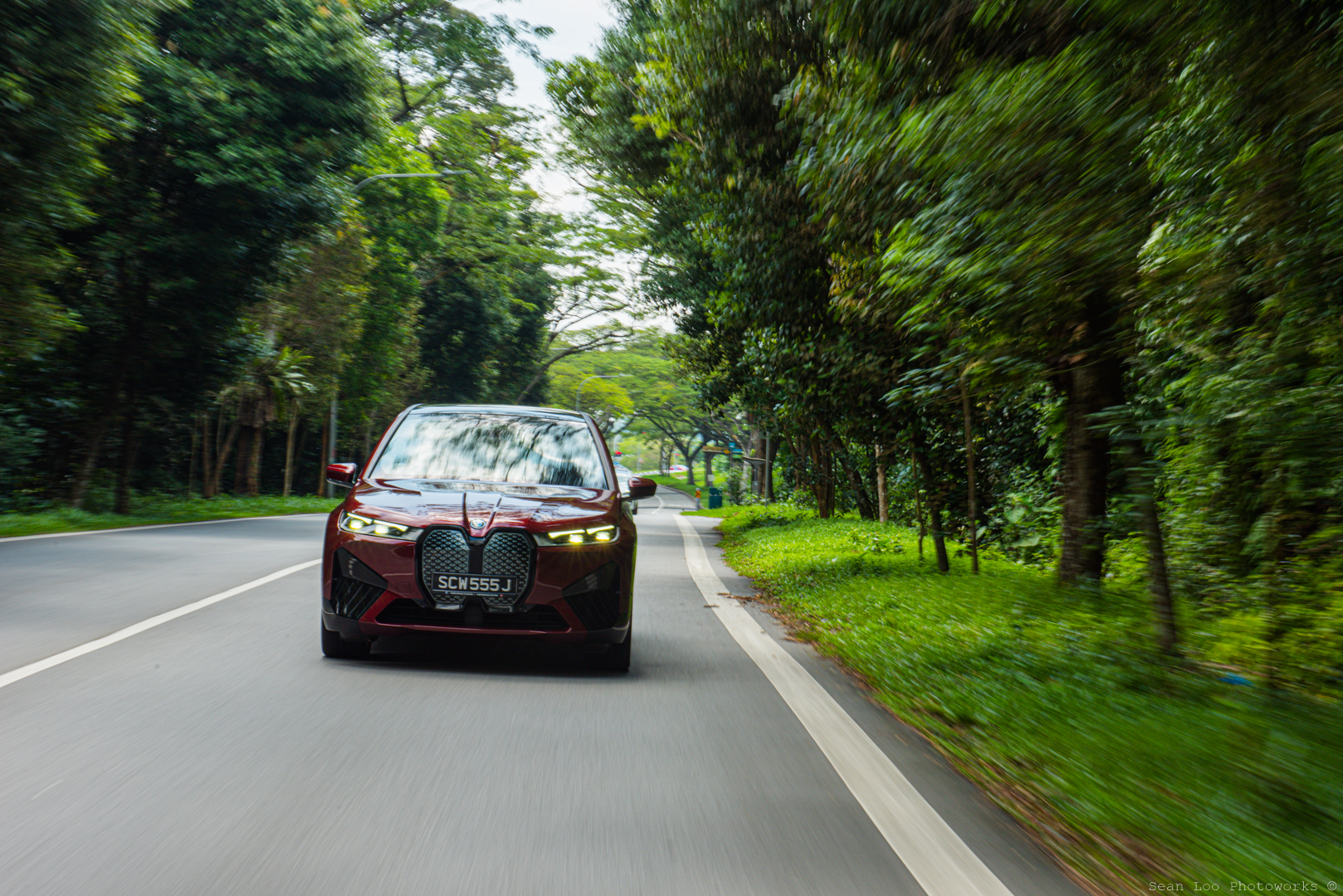 You might remember the iX from the viral video of it completely changing colours at the Consumer Electronics Show (CES) 2022. That particular car was known as the iX Flow and had special E-Ink paint that allowed it to do that crazy colour change and while (sadly) that feature isn’t available to customers yet, the car we tested is no less quirky or funky.

Right from first impressions, the iX is a big step forward in terms of design. So big in fact that I have to admit, I initially thought it looked a odd. But after spending more time with the iX, it grew on me in an equally big way. The lines I thought strange became captivating, and you can quickly find yourself lost in the detail of the iX, especially since it’s massive.

The iconic kidney grille has survived the electrification, though it is purely for aesthetics and not cooling. To be fair, it does house a bunch of sensors, radar, and camera gubbins the car uses, but otherwise it has no real role to play apart from maintaining a brand identity. 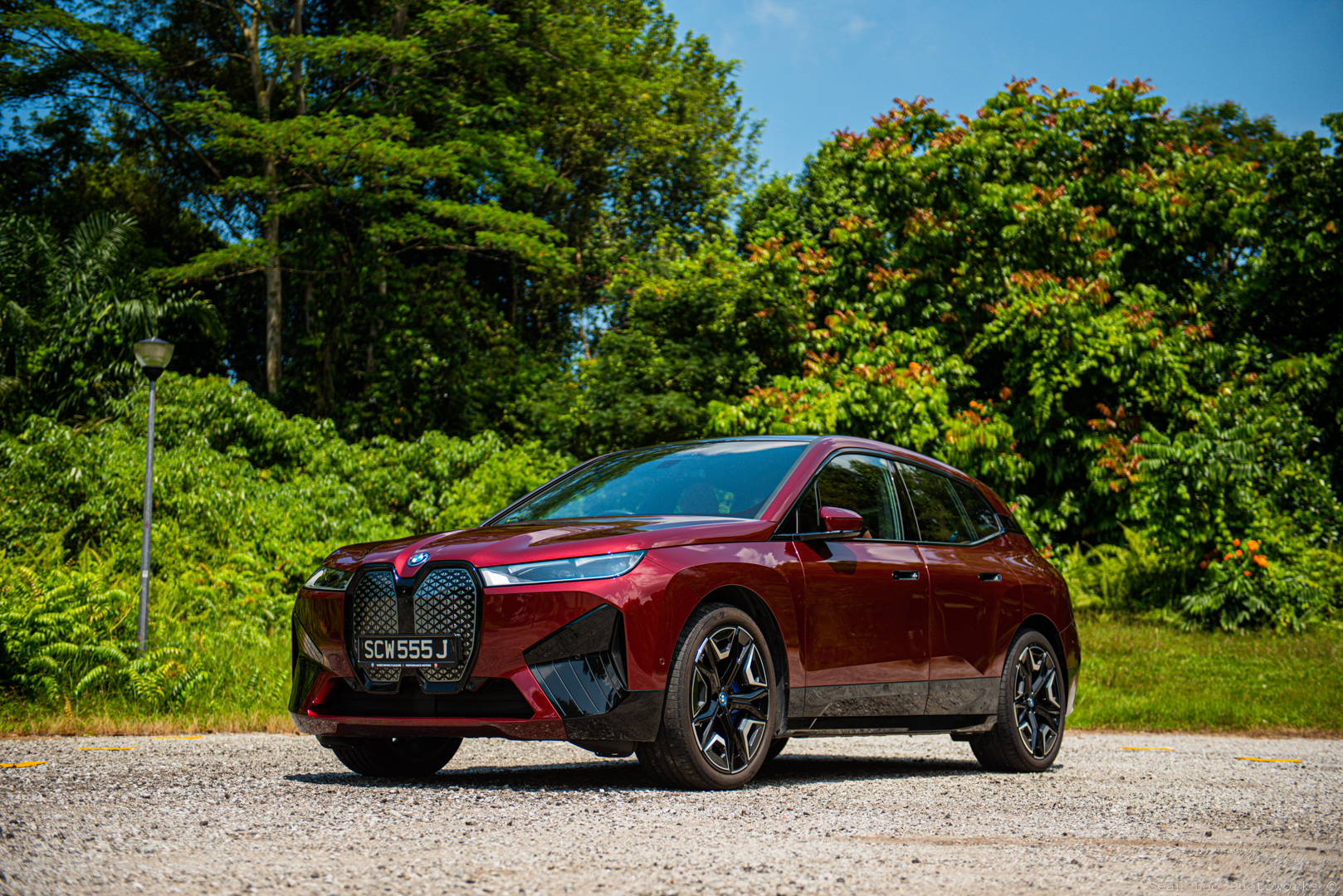 It fulfils that role admirably though - there is simply no mistaking what brand made the iX with its BMW-ness making itself unashamedly apparent.

Flanking the kidney grille are the BMW LED headlights as well as a couple bits of trim that resemble the grilles and vents you’d find on an ICE car. Back up a little and you realise that you’re dwarfed by the size of the iX, everything on it is just vast. In fact, it’s so wide it takes up almost the entire width of a normal parking lot, which makes getting in and out a careful task lest you ding the gorgeous BMW Individual Aventurinred metallic paintwork. 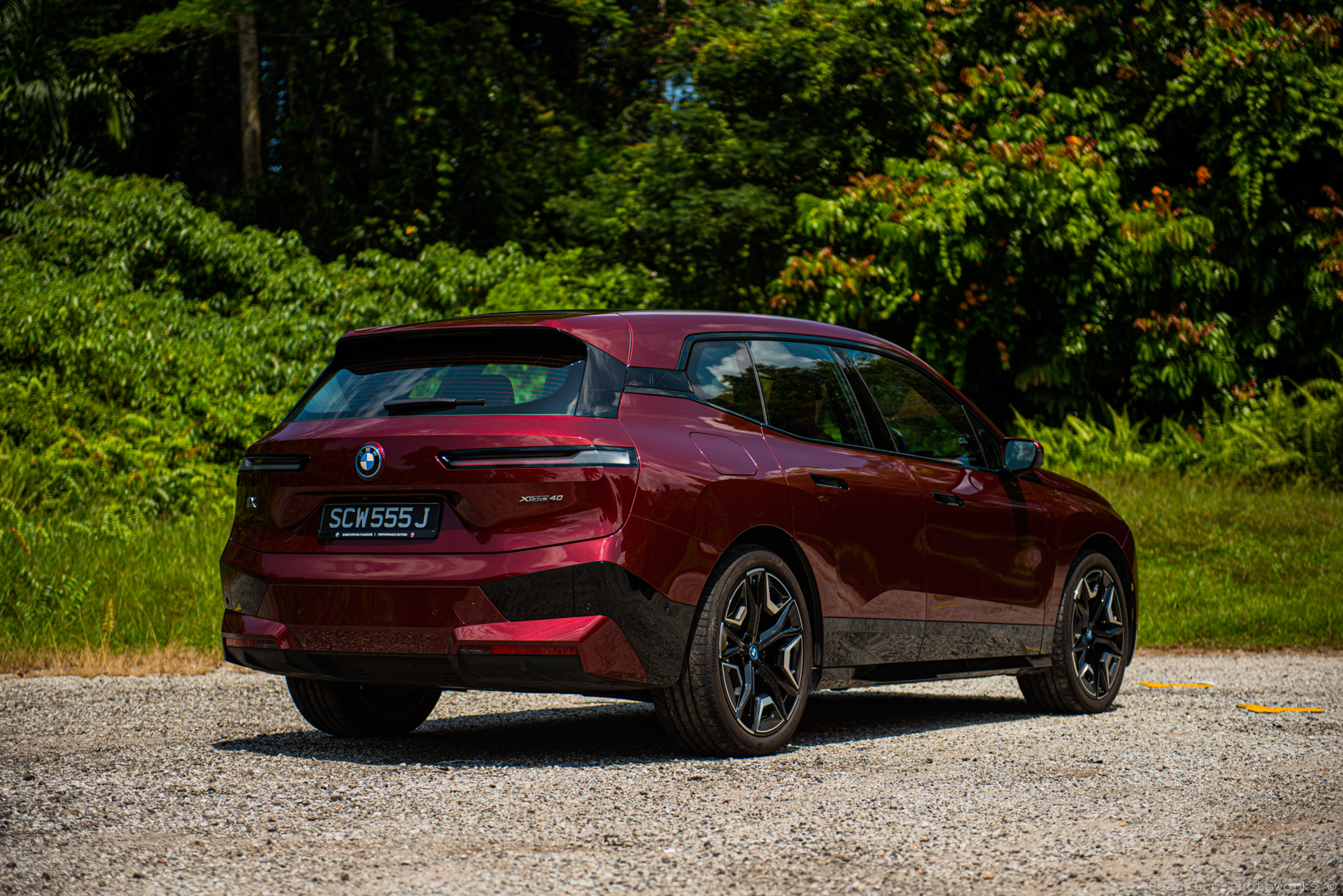 The iX commands huge presence on the road with its muscular stature and angular lines making it look like something out of a sci-fi movie. Just look at the rims, they’re 22” flying saucers finished in a very stylish design with the blue-accented BMW roundel in the middle, a detail found throughout the car. 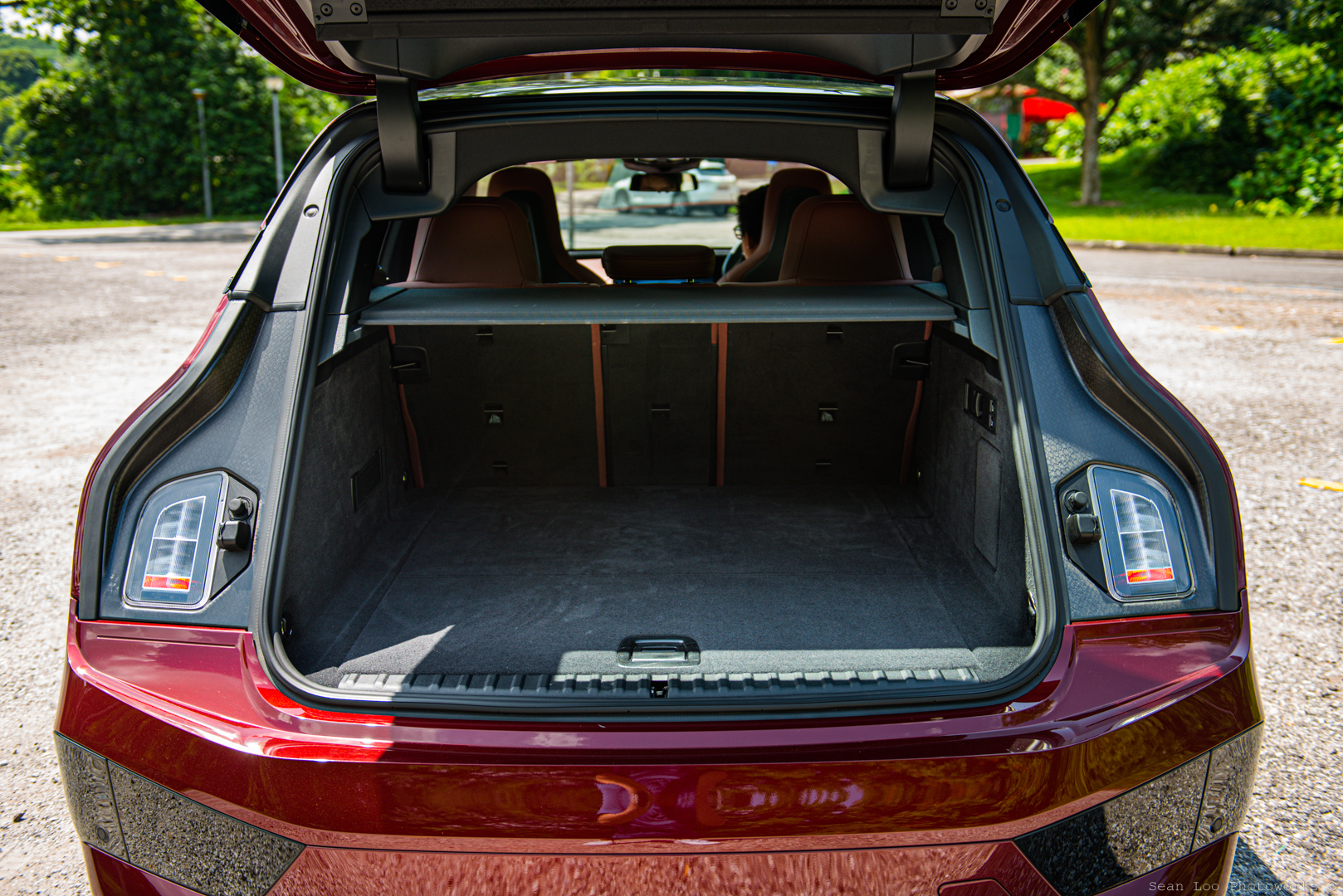 The enormity continues in the boot, where the rear electric tailgate actually spreads the width of the car which is something you don't often see. Wave your foot around under the car and the tailgate opens to reveal 500L (up to 1,750L with the rear seats folded) of storage space, more than enough to fit several bags for a family weekend getaway. 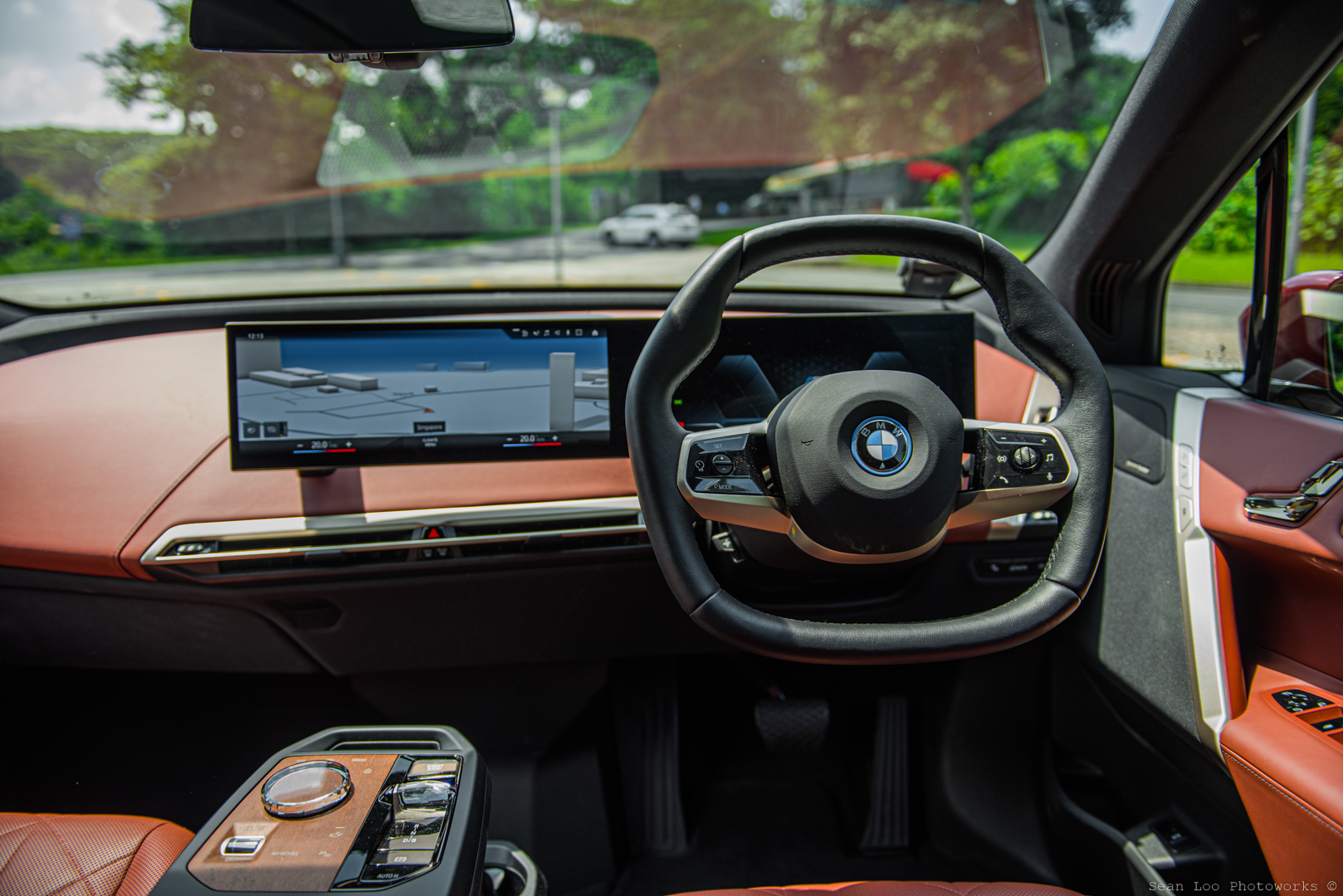 Open the recessed electrically-actuated door handles and you’re greeted with what is one of the funkiest interiors you’ll ever see. It’s covered in leather that’s been tanned with olive leaf extracts and other natural materials in line with the iX’s sustainable theme. 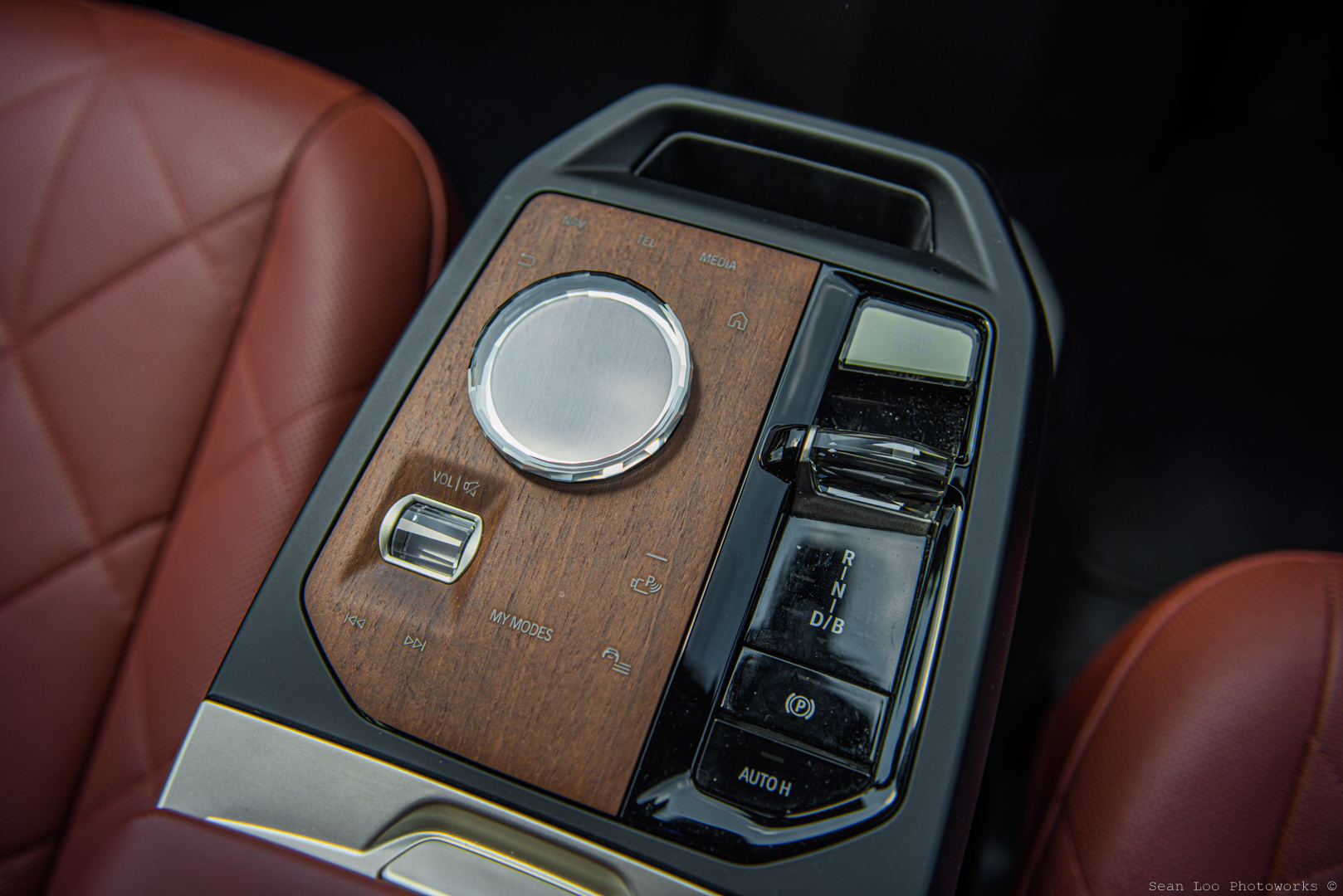 Other areas of the interior are also made using recycled materials such as sustainably-produced wood, recycled polyester, and recycled nylon from fishing nets recovered from the sea. But don’t worry, BMW has made sure that the eco-friendliness of the interior hasn't detracted at all from the comfort and luxury BMW owners desire.

There are lovely little touches like the seat controls, iDrive dial, volume roller, gear selector, and start/stop button being finished in crystal that just add to the ambience of the interior. The panoramic roof in the iX is no ordinary roof either, it’s electrochromatic which means you can turn it from clear to opaque with just a touch of a button. 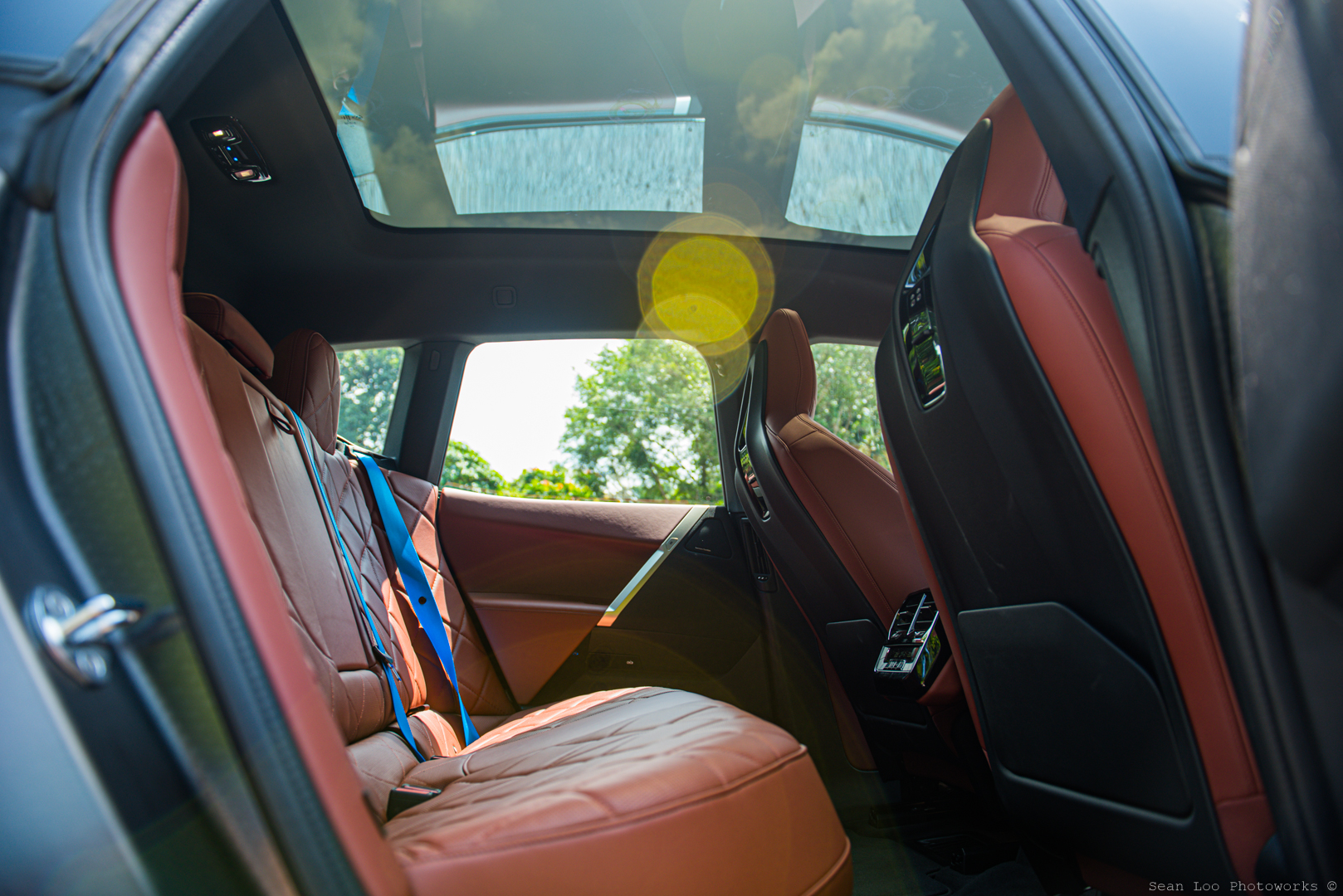 The iX is also incredibly spacious in the interior, a completely flat floor means that rear-seat passengers have no tunnel hump to deal with so leg room is maximised. The rear seats themselves are mega comfy too with subtle contouring for each individual seat instead of just having one bench. There’re also four USB Type C ports on the seat backs of the front seats so you can charge up well, four, devices at once. 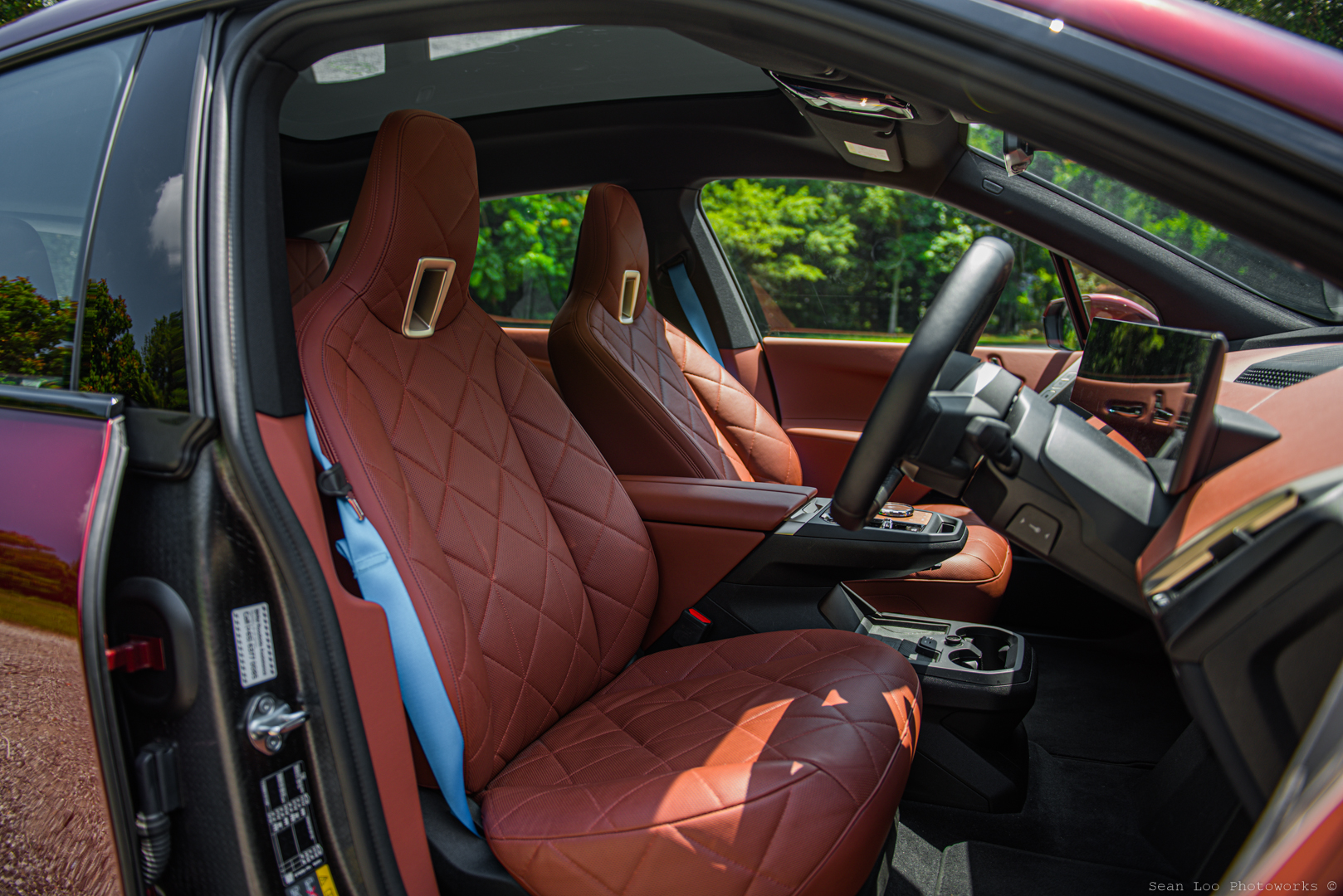 That brings me to the front seats.They have a sort of pseudo-bucket-seat look and are undoubtedly very comfortable, but those with a shorter stature may hit their head on the trim pieces at the base of the integrated head rests. That is something that really isn’t ideal, especially in a fast EV where rearwards neck jolting is common.

As you might expect, the iX is basically at the bleeding edge of car-bound tech. It features the first-ever curved screen to be put in a BMW, comprising the 12.3” digital gauge cluster and the 14.9” display for the infotainment system, all made to look as if floating above the dashboard. Through the screens, you can access the wireless Apple CarPlay and Android Auto as well as your Drive Modes and the super clear 360˙ camera. 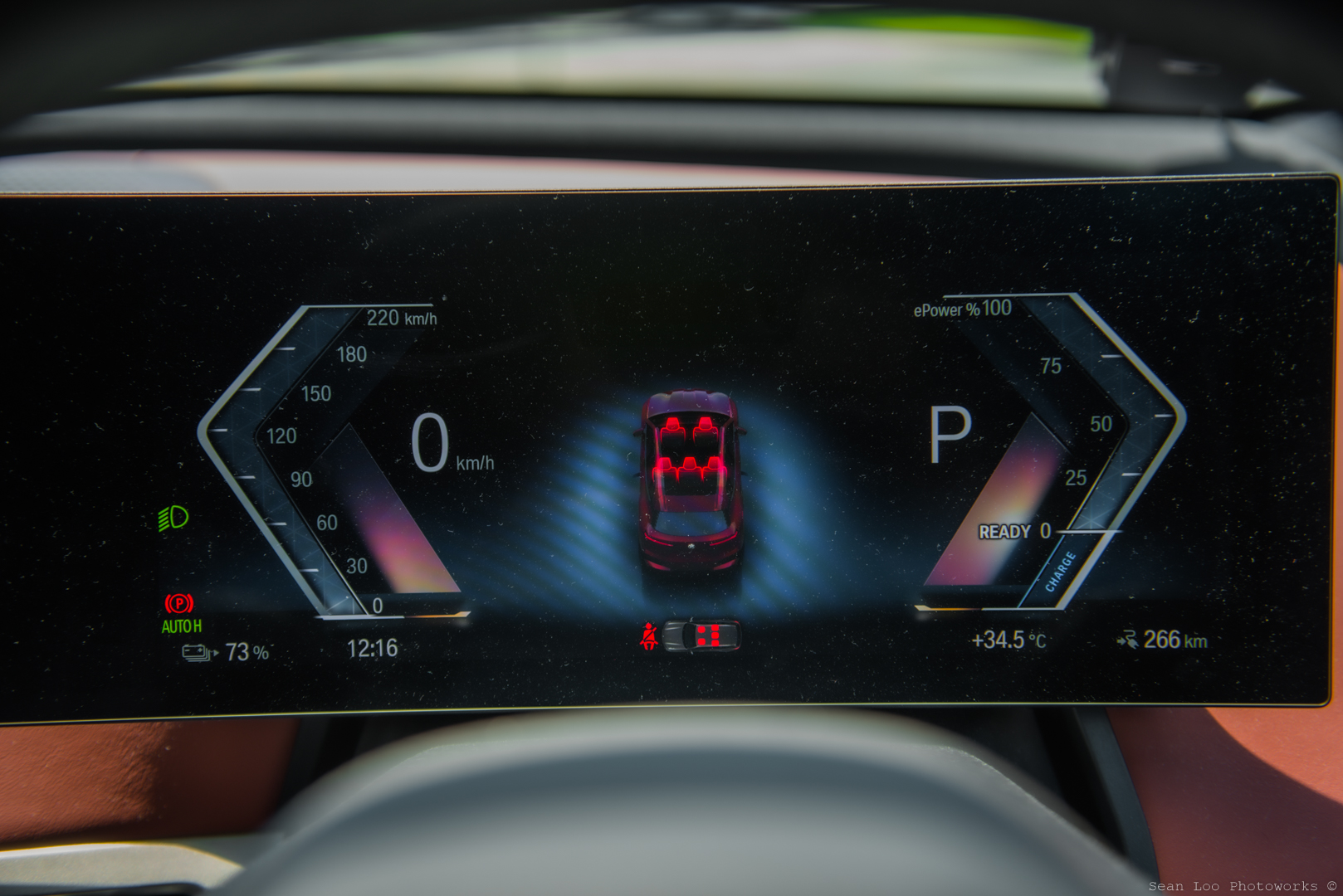 The iX also features adaptive cruise control with stop/go functionality as well as get this, adaptive regenerative braking. How this works is the car sees up to four cars in front of you through a series of radars, sensors, and cameras (in the future, this will also include GPS to anticipate bends) that basically tell the car in advance what’s up the road.

The car then automatically adjusts the amount of regenerative braking to cater to what’s happening in real-time. The system is incredibly intuitive and works silently and effectively in the background to the point where you barely realise it’s happening. 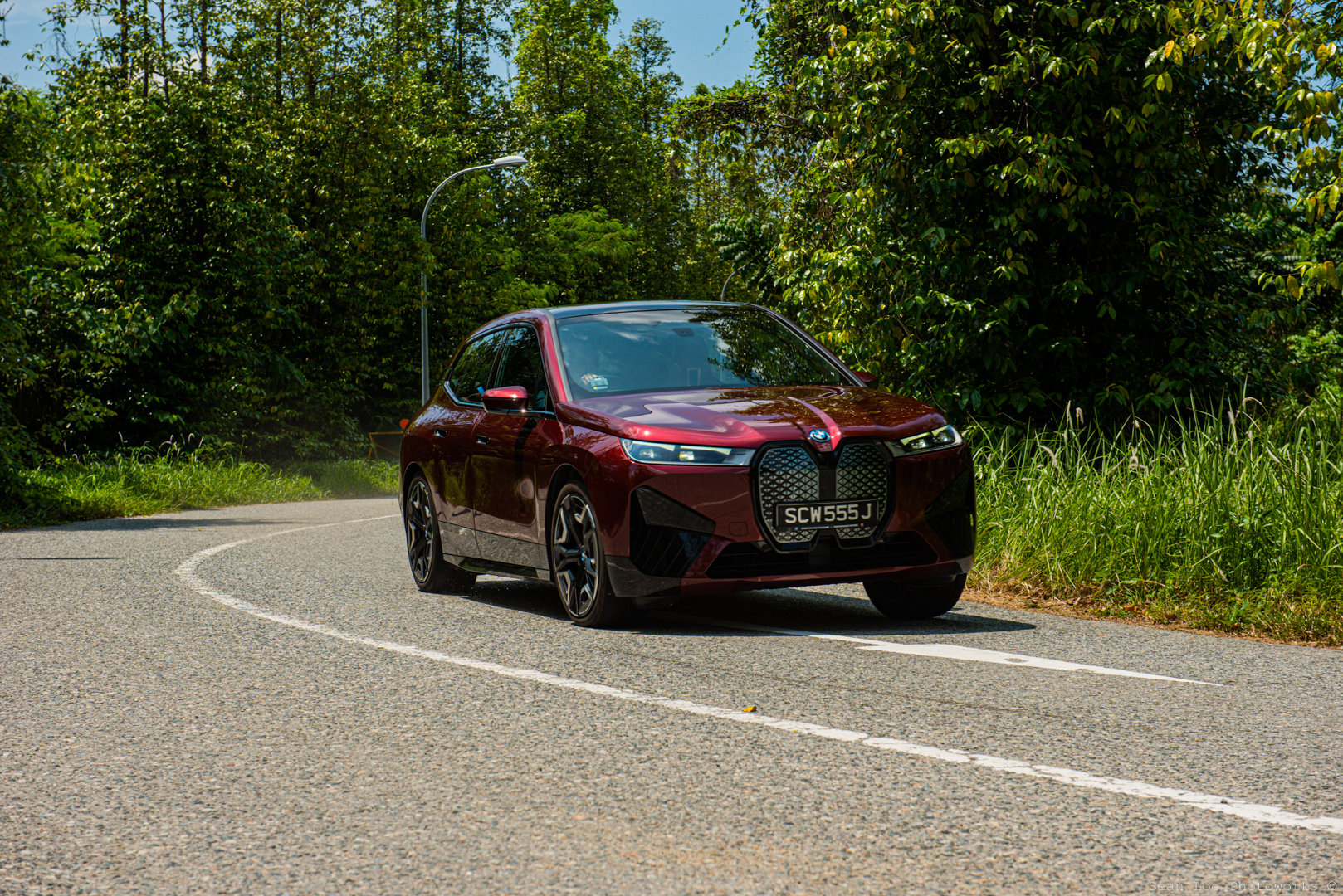 It’s not the only thing smooth either, the ride quality in the iX is just buttery. The suspension glides over bumps and imperfections without effort, and the comfort levels are through the roof. The cabin is so serene that when tested, it was found to be one of the quietest cars ever tested, losing only to the likes of the Rolls-Royce Cullinan and Bentley Bentayga.

The calm in the cabin is only interrupted by either your tunes playing through the Harman Kardon stereo or the electric whirring when you prod the throttle, a refined sound composed by the one and only Hans Zimmer. 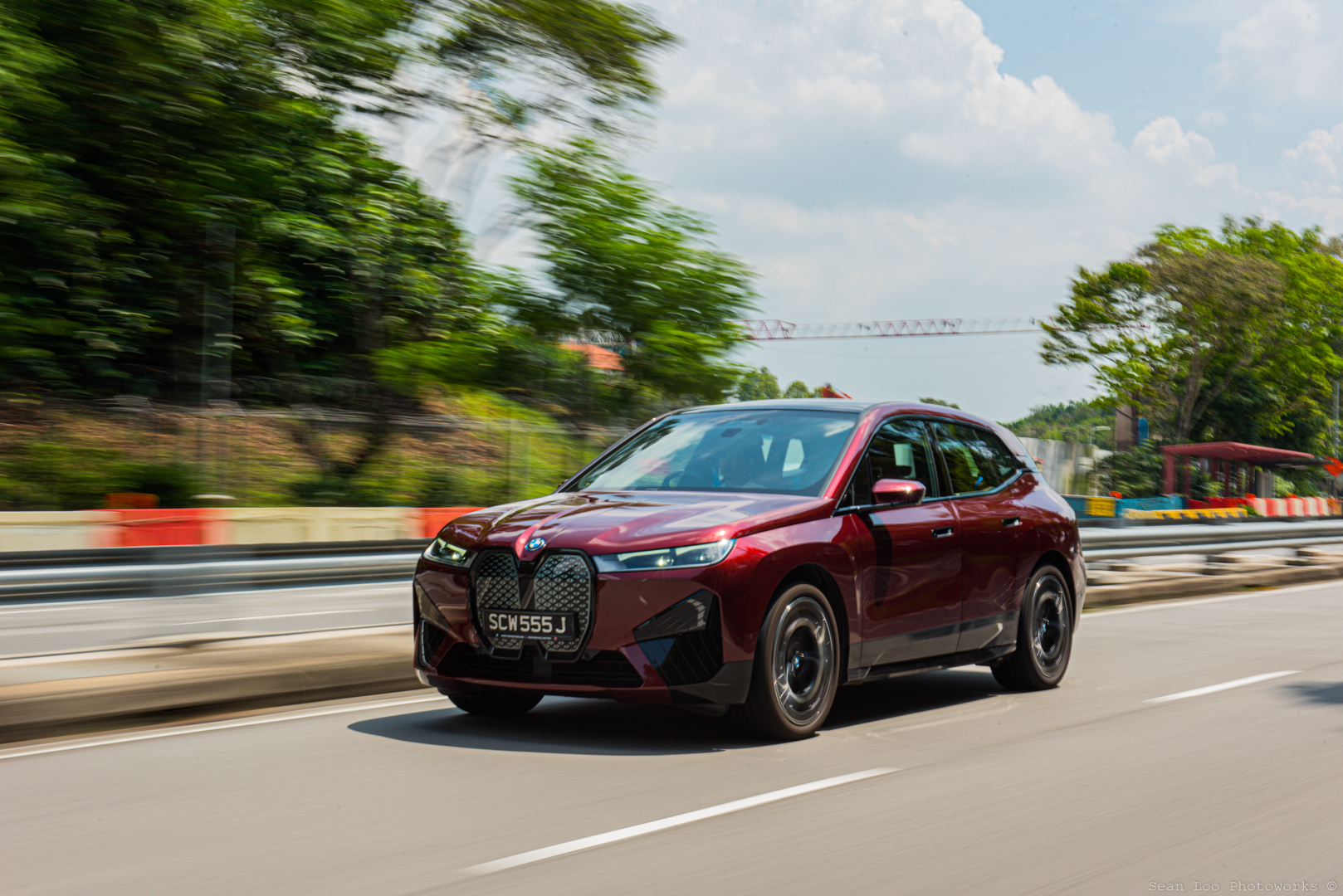 The drive from its dual motors is also as polished, delivering its electric power with a steady shove. As it should do anyway, the iX generates 326hp and 620Nm of torque paired with a 76.6kWh battery and single-speed transmission to send that juice to all four wheels.

While on paper, 326hp doesn’t seem like all that much, the instant nature of electric power means that the iX will still hit 100km/h in 6.1s, though it feels faster than that, no mean feat considering the iX weighs in at over 2.4 tons. Acceleration, as expected, is not as violent as some other EVs but still more than enough to throw your head against the headrest (or the trim if you’re short). 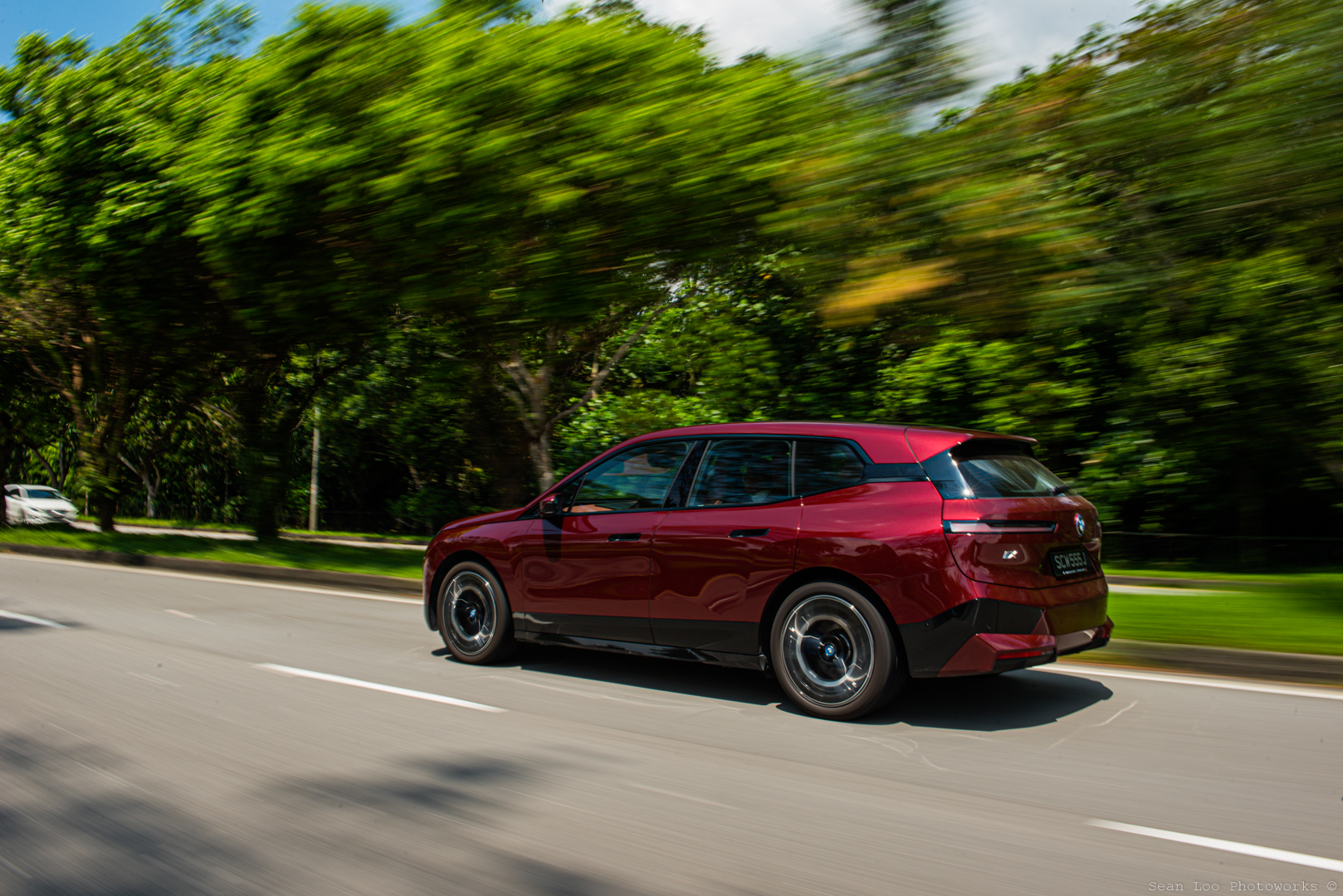 Despite the weight, the iX still managed to achieve about 20-ish kWh/100km of range despite plenty of heavy-footed driving. Worry not about having to charge it too because not only does the iX support fast-charging and whatnot, get this, BMW Asia are offering iX customers either a home charger with complimentary installation or 10,000kWh of charge credits for three years at Shell Recharge stations.

That’s insane value - imagine paying absolutely nothing to power your car for three years, must be nice. 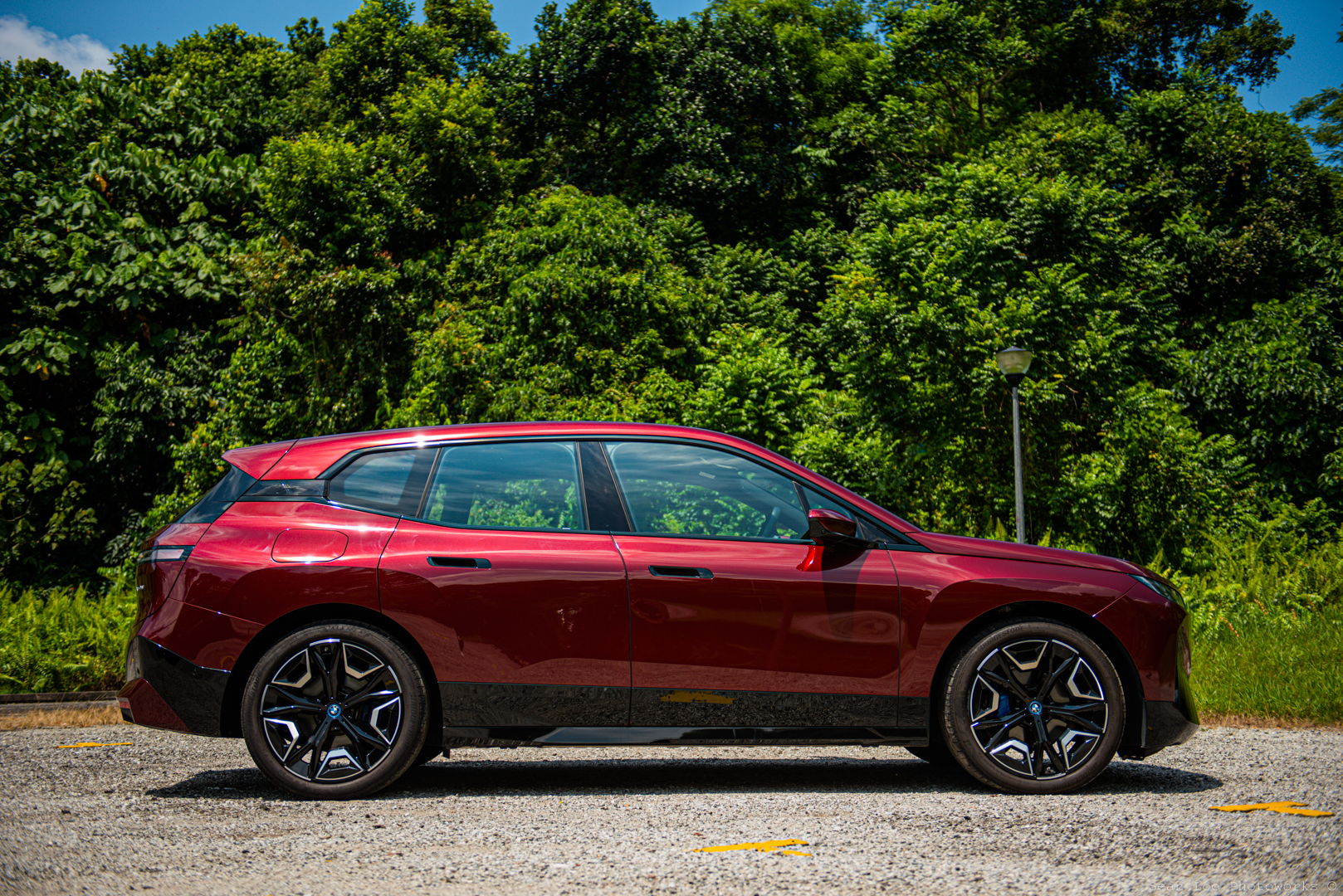 In town, despite its proportions, the iX is actually a cinch to drive. Its high driving position gives great visibility and the car feels like it shrinks around you, especially when you have that electric power to assume any gap in traffic you want.

The BMW iX feels like a proper luxury electric SUV that has had real effort put into it. It doesn’t feel like BMW just slapped some electric motors on an existing platform and called it a day, it feels refined and has a premium quality to it that I haven’t often seen on EVs.

I’ve said it before in other reviews but I’ll say it again, if this is what is to be expected from the cars of the future, then I say the future ain’t too bad at all.

If you want to give the future of luxury a try, you can arrange a test drive here!