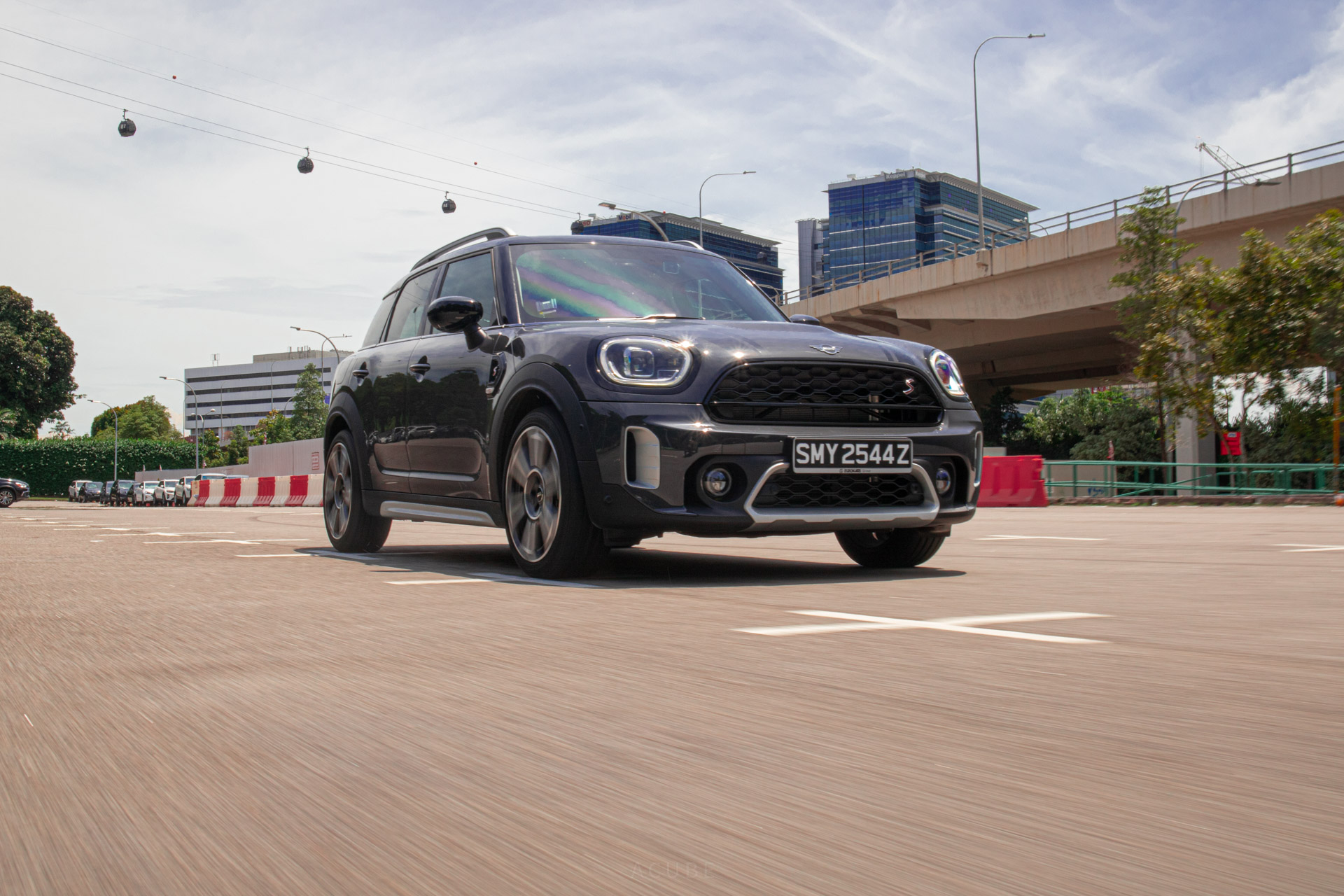 The MINI marque typically conjures up images of British patriotism, wrapped up in a smartly-packaged and well-engineered compact hatchback. On those metrics then, it’s actually fairly difficult to call the Countryman a bonafide ‘MINI’.

See, underneath that retro-meets-modern body, lies the bones of a BMW X1, a car that is German through and through. And its name is perhaps a misnomer too, because this ‘MINI’ dwarfs just about the vast majority of mainstream compact crossovers. 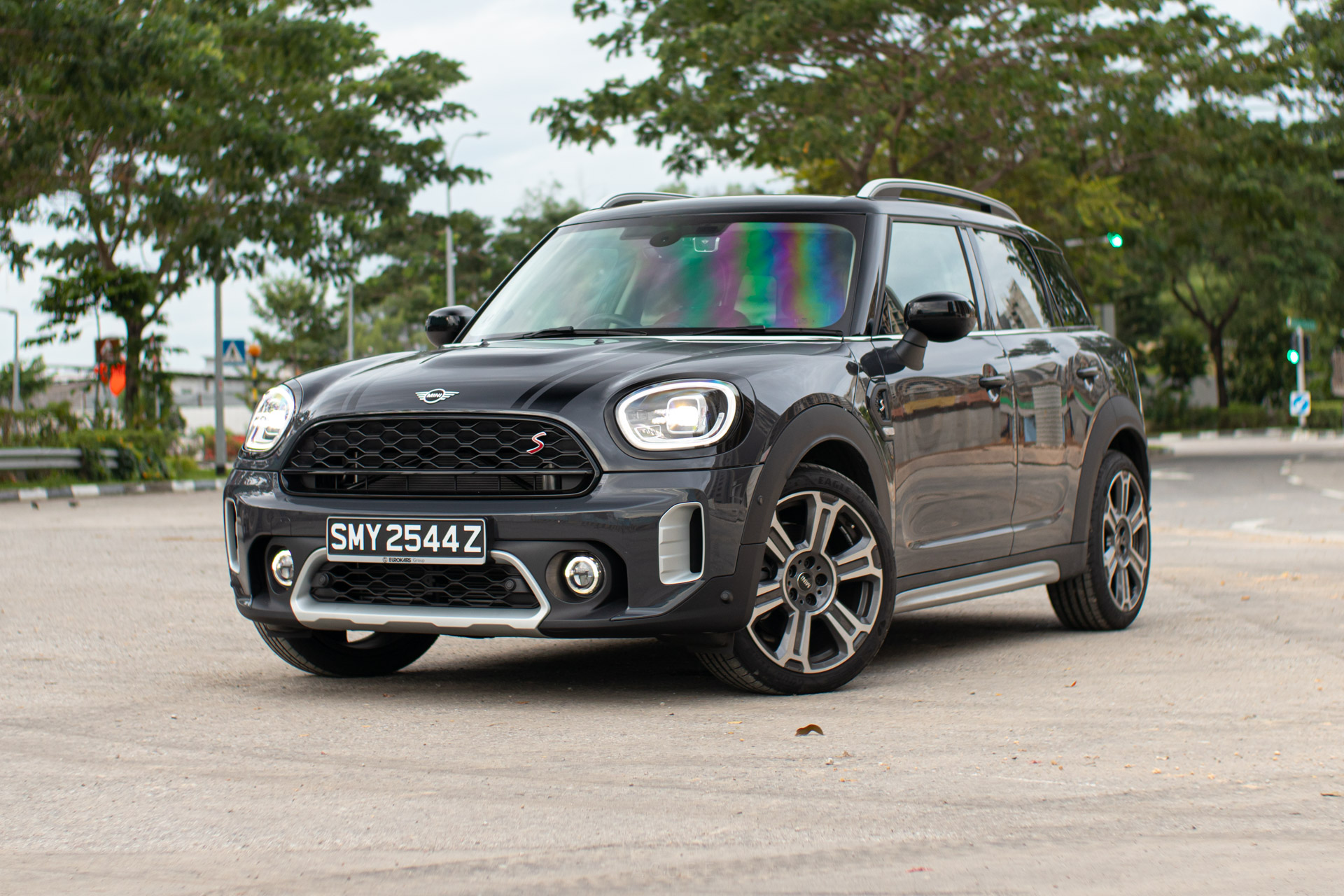 The Countryman’s questionable ancestry may draw ire to the Anglophilic petrolhead (not really a big deal in the grand scheme of things, we’re sure this presents as a really small niche of car shoppers!), but there’s no denying that the car still manages to preserve the full-fat MINI experience.

What Makes A MINI?

To understand just what constitutes the aforementioned 'MINI experience', we need to take a look at goes into the construction of your stereotypical MINI Hatch. They may ride on a dedicated platform developed for the marque, but even those underpinnings are Germanic in origin.

The powertrains that go into these vehicles are also borrowed from BMW’s catalogue. 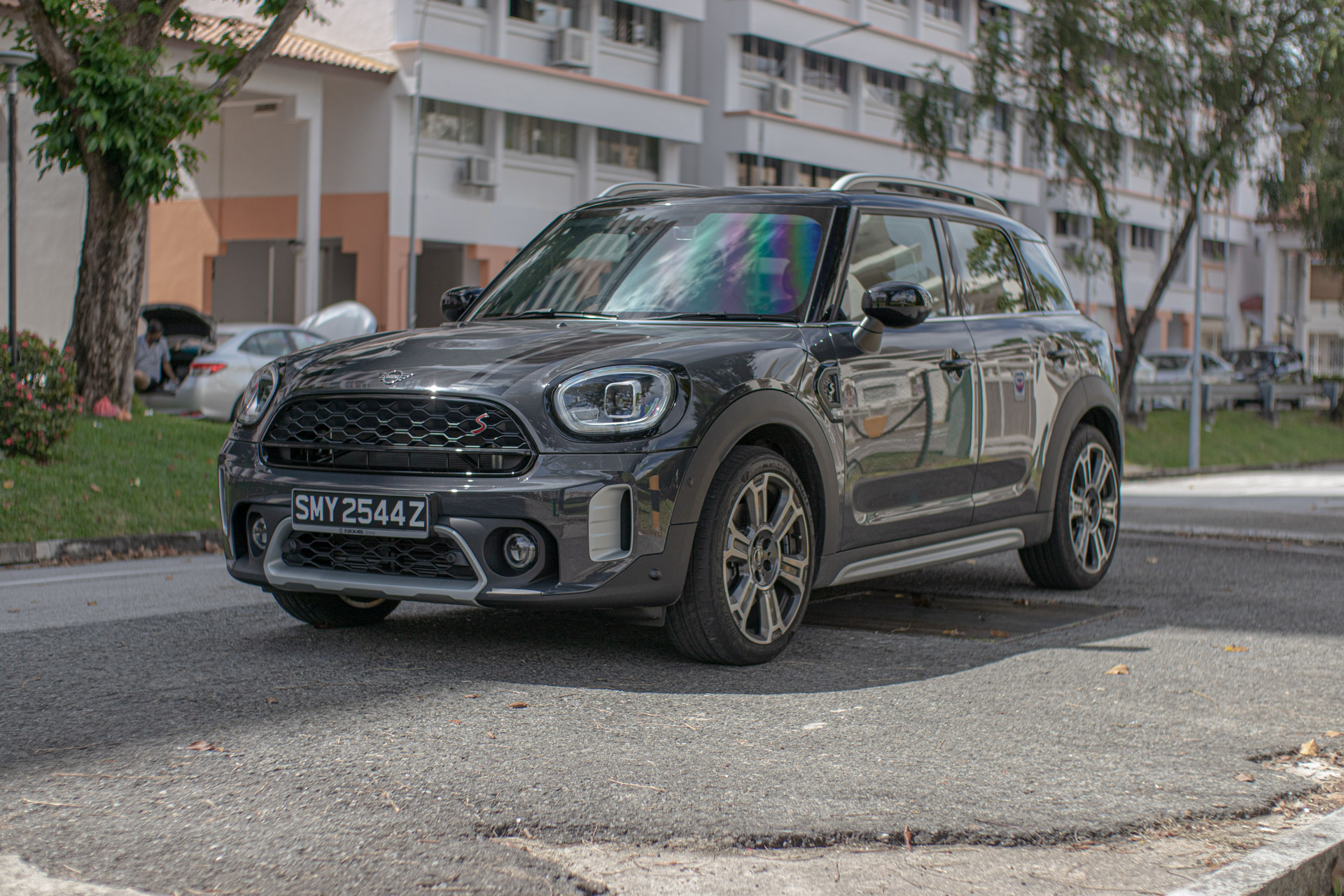 In fact, the only thing irrefutably ‘British’ about the modern MINIs is their overall design language, and even that has been breathed upon by the BMW boffins. Realistically though, you’re unlikely to care about its country of origin because, as an overall experience, MINIs just have a certain, inimitable charm.

It’s a MINI - what else can we say about it? All the design cues you’d expect to find in a modern MINI are present, albeit stretched and altered to fit a small SUV form factor. As part of the SUV makeover, some of the stylistic elements have been revamped, and made more ‘butch’ to better suit this new bodystyle. 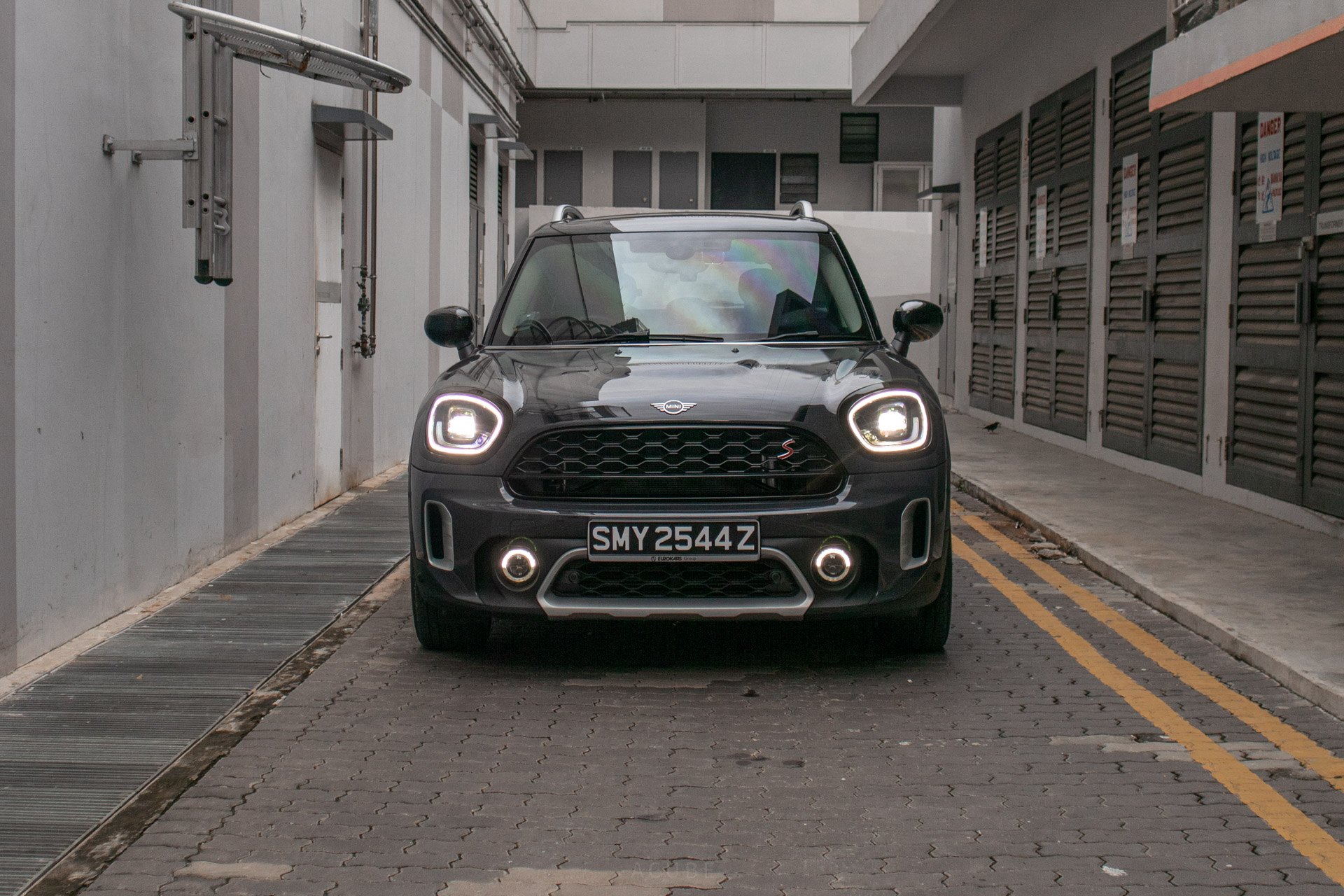 This new facelift has made the front fascia more cohesive, with MINI opting to alter the shape of the front bumper for a more aggressive look. Slits for vents at the corners of the bumper have also been incorporated, a cue that is also present in the MINI Hatch cars. The bumper design does present a slight departure in what you’d have expected from MINI in recent years, but the added definition suits the car well.

To keep the styling consistent, the rear bumper also has the same set of elements as on the front fascia. We’re not a fan of the faux-diffusor-meets-body-cladding on the rear bumper though - surely there has to be a better way of finishing off the back end? 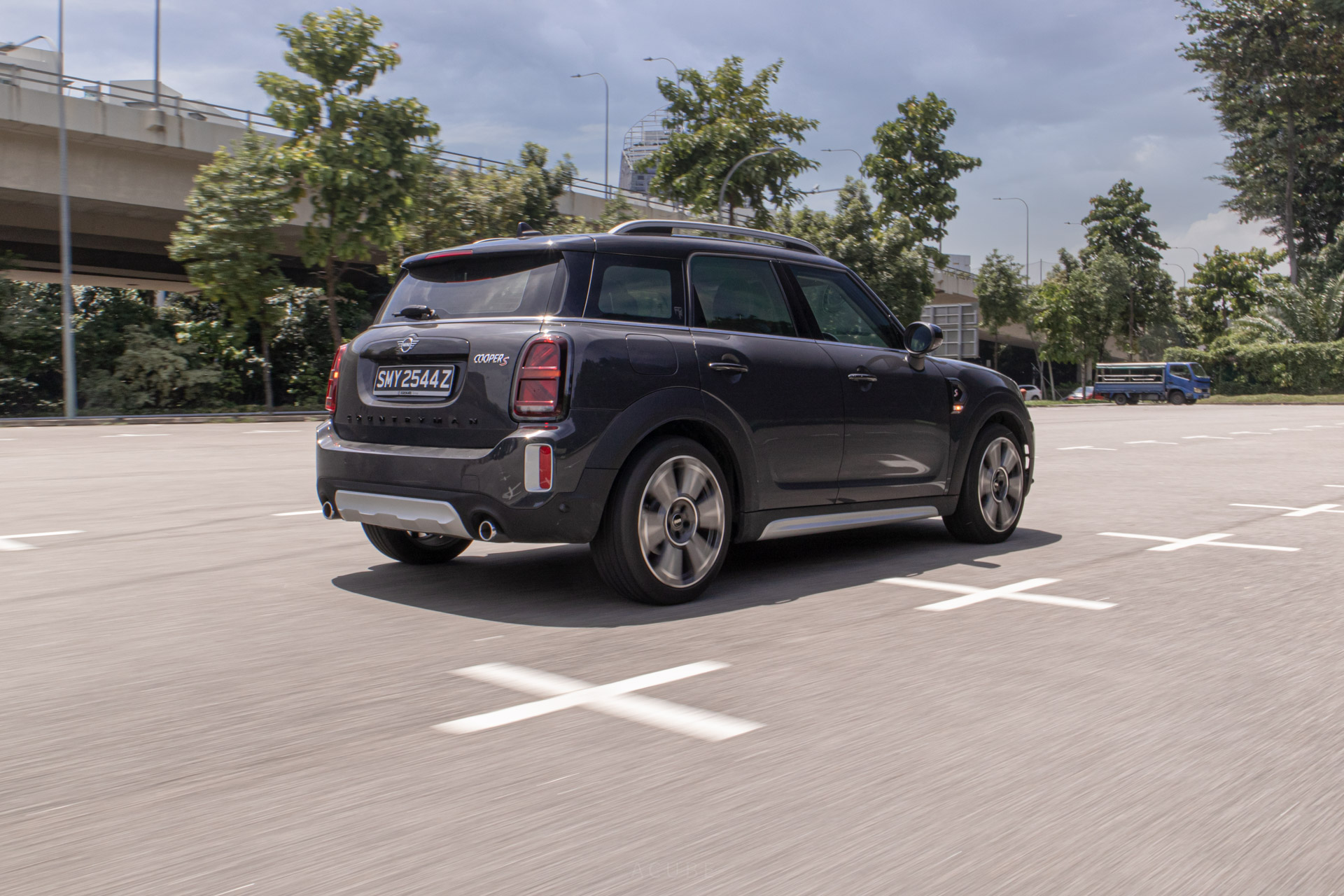 More restraint has been exercised in the styling of the interior than its hatch counterparts. There’s no funky, overly-styled dashboard here, just a simpler and more grown-up looking cabin. The cluster, round central screen, as well as all the switchgear, have made it over to the Countryman with no change though. 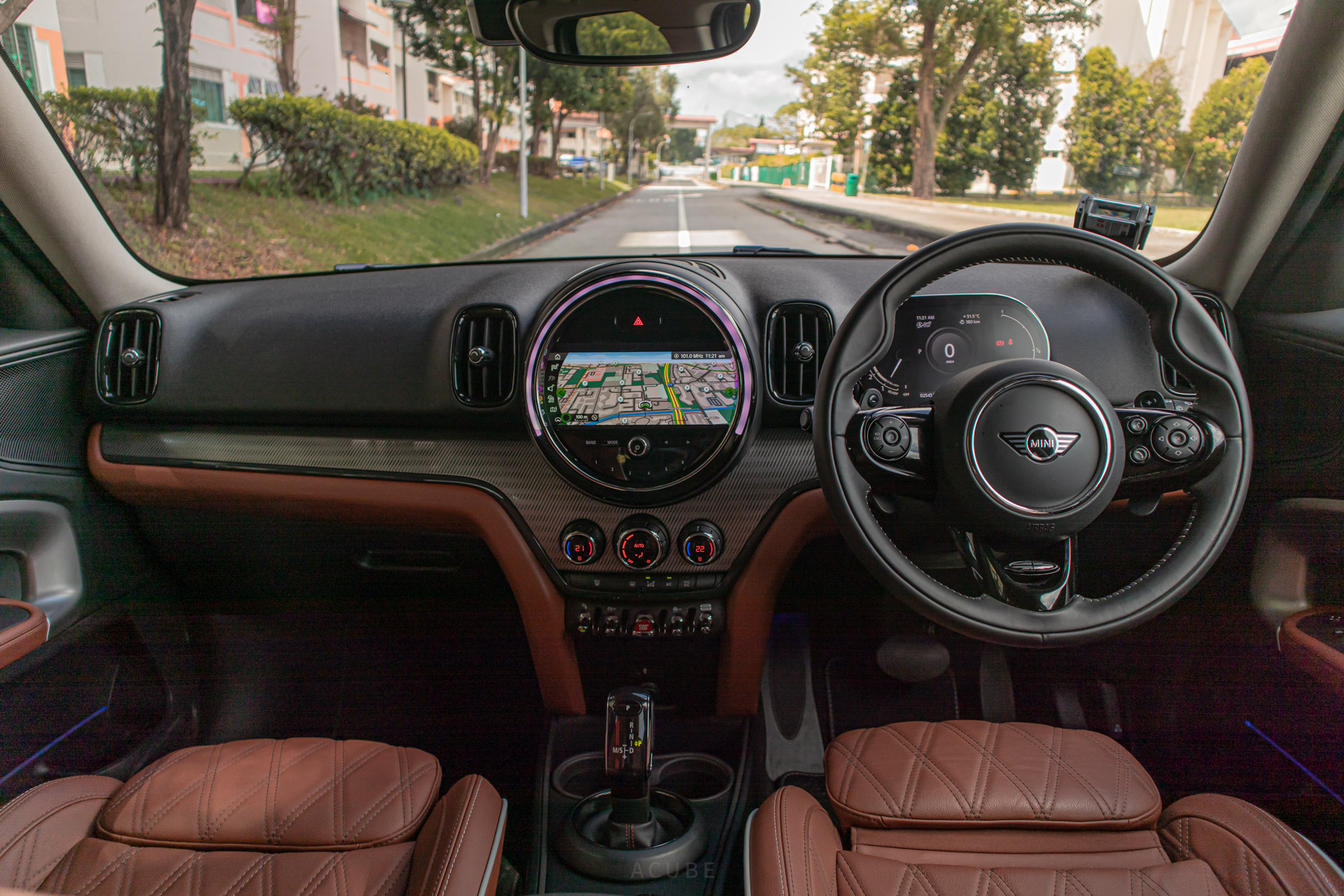 Space is good on the inside, and you’ll find the same ergonomic seats as featured in all the other MINIs we’ve reviewed on Motorist so far. Perceived quality is also just as good as all the previous models which we’ve gotten our hands on too. If you are after MINI styling with more space, this is probably the model for you!

The car surprised us. Sure, this is a marque famed for building well-handling cars. But let’s be real here - the Countryman is an SUV. Cooper S or not, its higher ride height and general proportions mean we really were not expecting the car to behave anywhere near as well as its Hatchback stablemates.

Afterall, if you’ve sampled other crossovers of a similar size, you’d know that cars of this form factor typically offer substandard go, with sloppy handling from an imprecise steering rack. 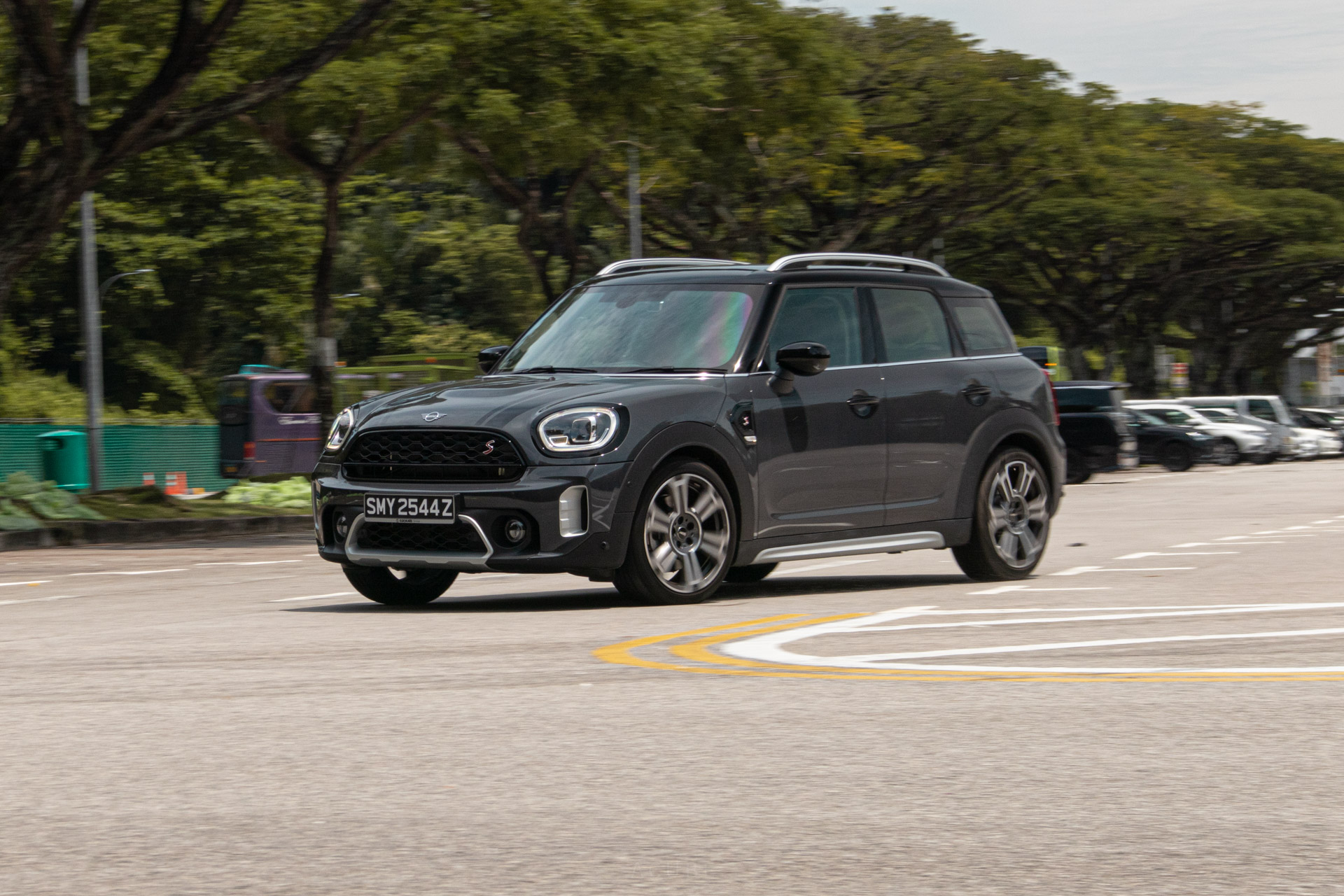 Thankfully though, when the car is properly pushed, you'll find that the MINI experience has been preserved - somewhat anyways. Sure, you’d find the limits of the car pretty quick once you significantly up your entry speed, and barrelling into a sequence of bends with a healthy dose of understeer.

But drive slightly under that, and you’ll realise that it handles much like a MINI Hatch being driven at seven-tenths. It offers grip and confidence that encourages you to carry more pace through a corner, with enough traction and then grunt to drag you out of it again. 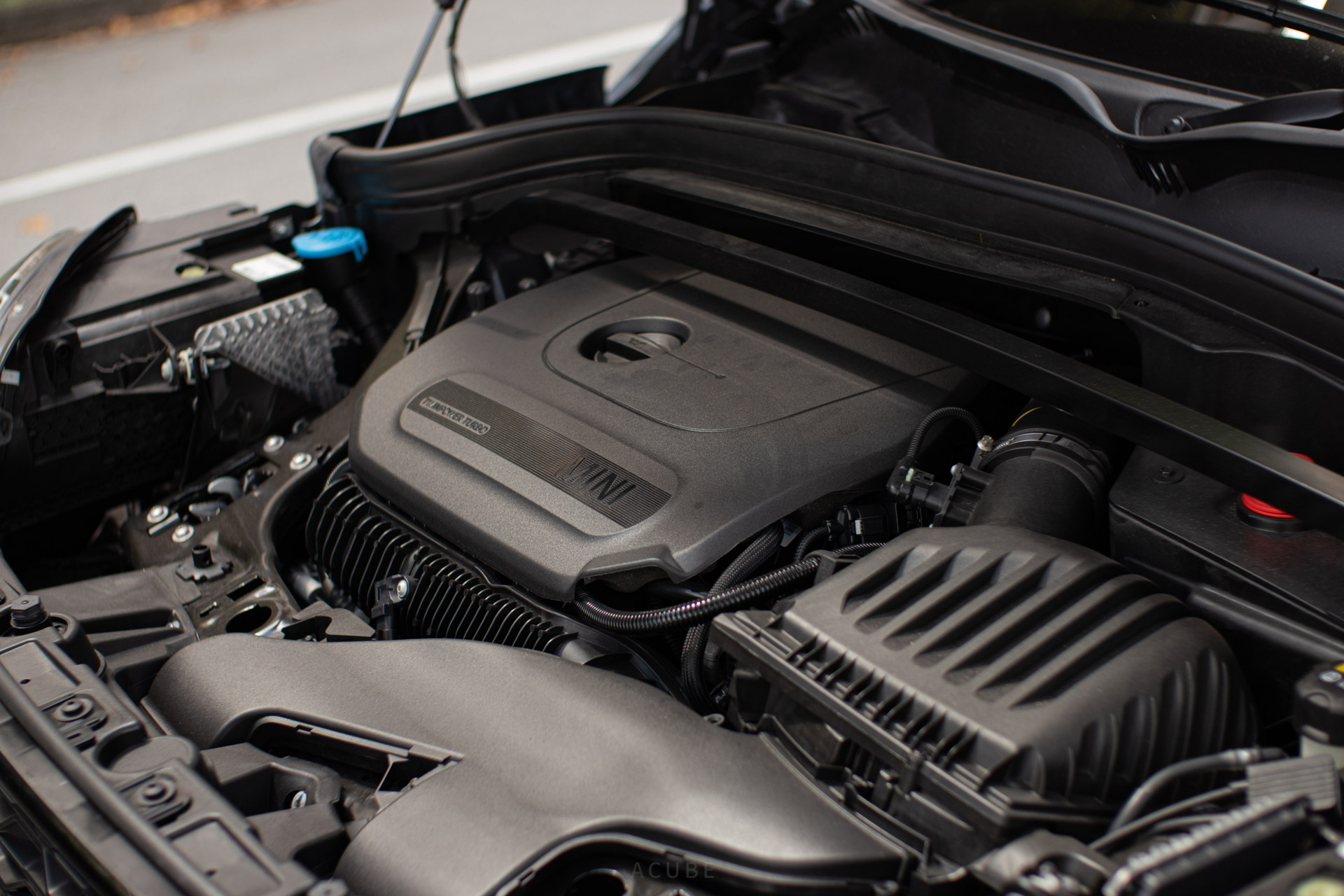 The very vocal wastegate adds to this sense of occasion, a visceral combination that makes you forget that you’re in a BMW X1-sized crossover as you spiritedly tackle tight bends at speed.

A BMW-sourced B48 2.0-litre turbocharged four banger lives under the bonnet, outputting a frankly paltry-sounding 178bhp. Spend some time behind the wheel though, and you’ll realise that there’s actually a very wide powerband, so there’s actually decent power regardless of road speed. Couple that to the seven-speed DCT, and you have a decently punchy and usable package. 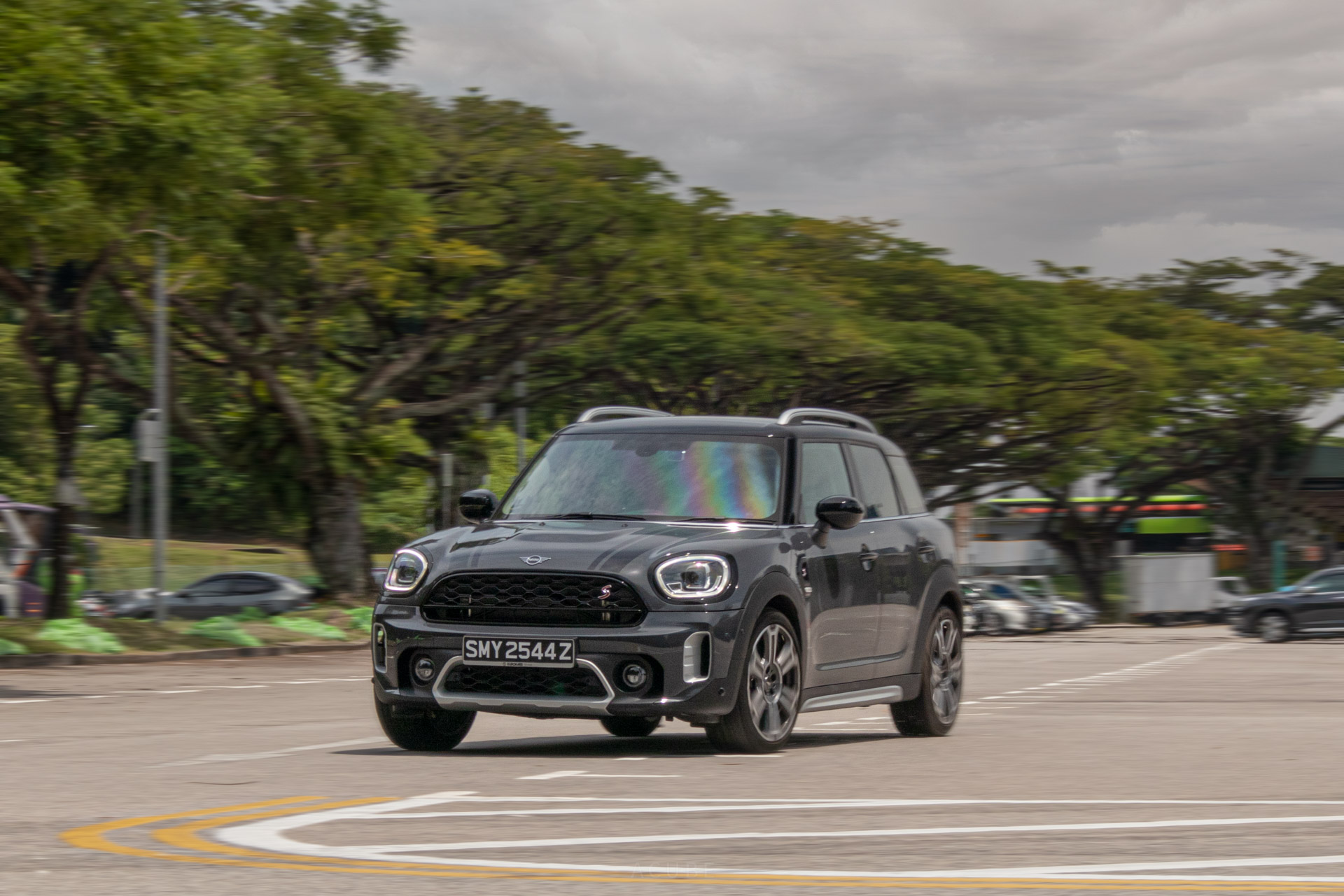 It isn’t all a bed of roses though. With all driver aids off, there is detectable torque steer, and the anchors really do not offer a lot of feedback. As expected too, the stiffened suspension and torquey motor isn’t enough to totally overcome the laws of physics - overstep your mark, and you’ll find yourself heading towards all the street furniture around you, even if you have ample steering lock applied.

Life With The Countryman

It offers a decently sporty drive, with a punchy powertrain and a well-made interior. Over bigger bumps, the car is less compliant than the hatchback variants, though this is a trade-off most will probably be happy to make, considering this is a MINI with enough room for our fully grown adults. 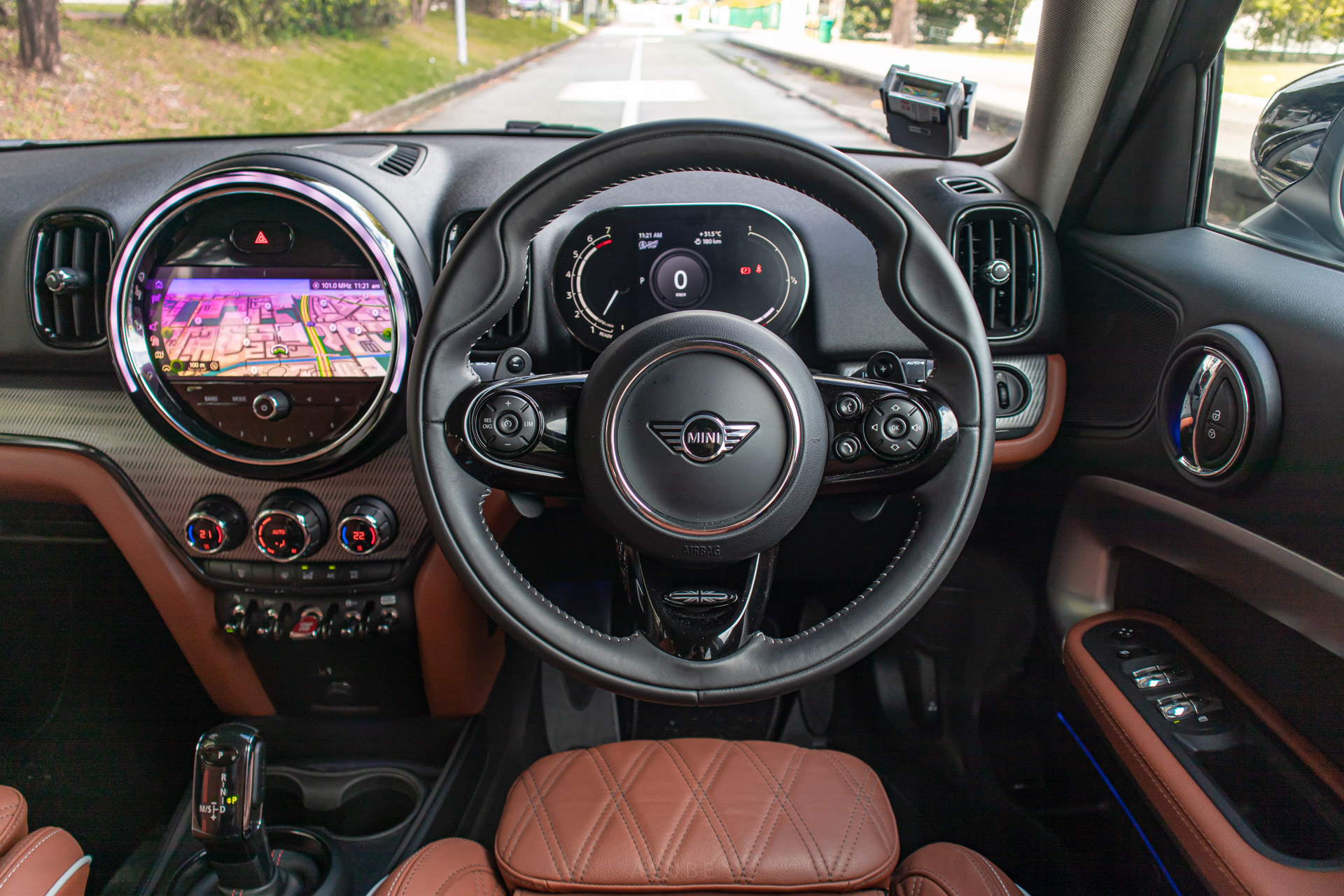 For the prestige and experience, there’s perhaps no better buy in its price bracket. The potential turn-off for the layman though, is potentially the car’s fuel economy, with a real-world economy rating somewhere in the mid-7km/l range. There are many similarly-priced SUVs with even more space and efficiency.

But none of them are quite as unique or stylish as a MINI product, so if that's what you're after (and cash for fuel isn't a factor for you!), there’s really no alternative!