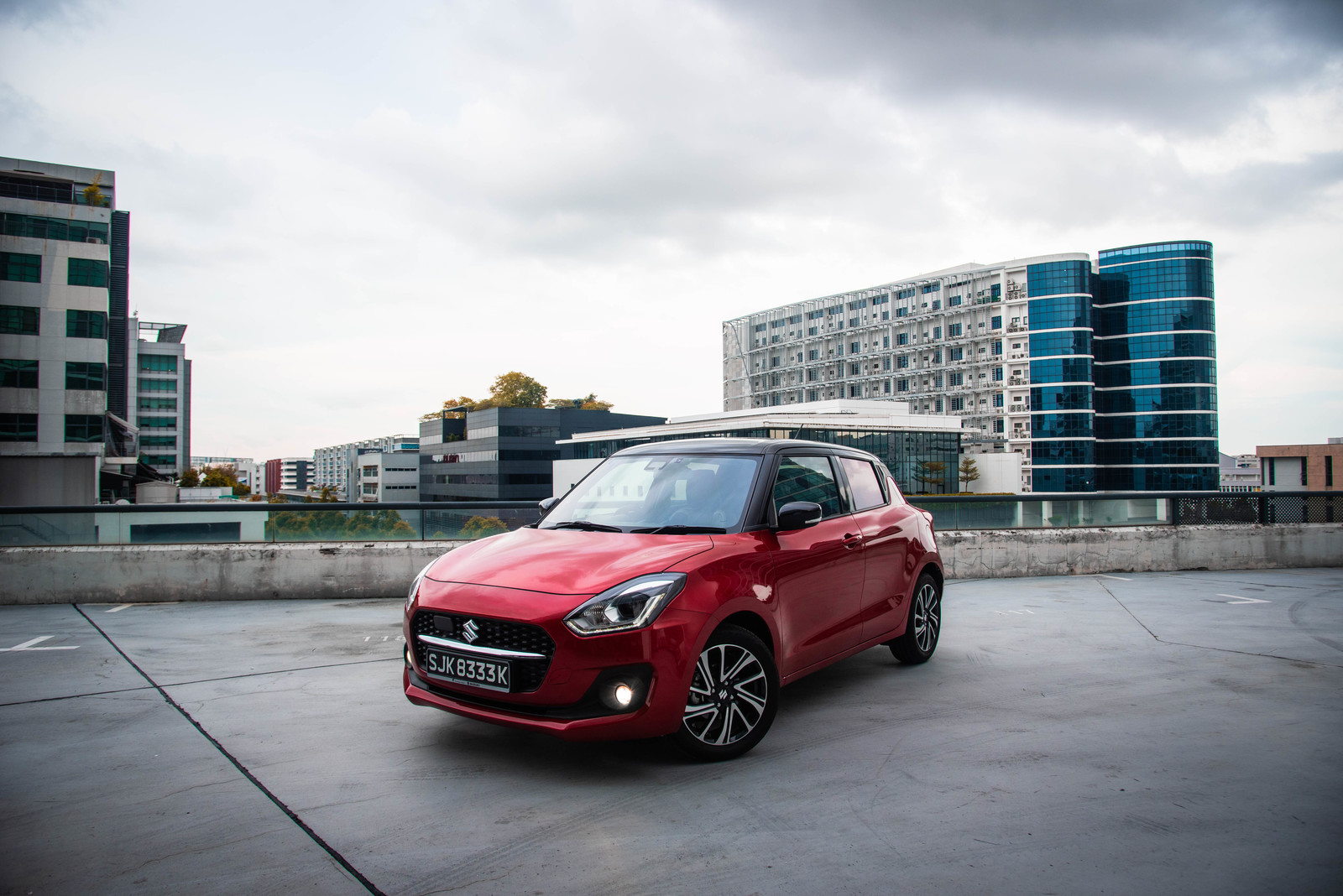 We’ll say this from the outset—the Suzuki Swift 1.2 Mild Hybrid is a give and take kind of car. But if you’re on a tight budget and are simply on the hunt for cheap and cheerful hatch, you’d probably already be okay with some give and take.

And the thing about the Swift is that it does come packed with enough goodies and personality to justify whatever power and equipment it lacks. 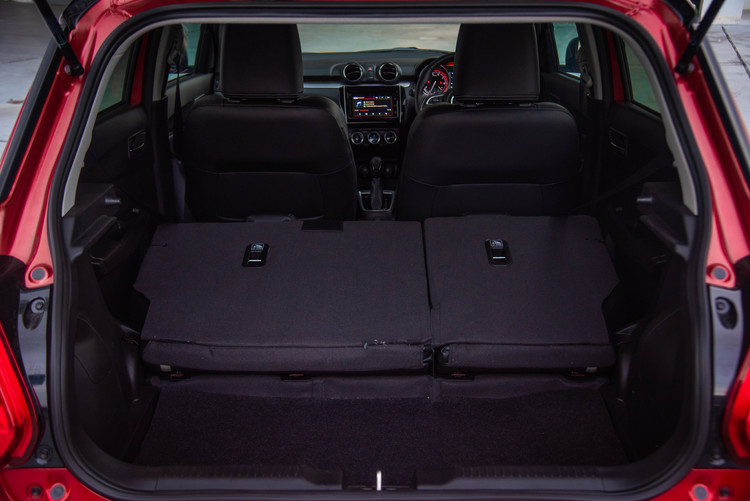 Well, 265 litres of cargo capacity for one, which isn’t bad considering that this is, after all, a subcompact hatch. If you find yourself wanting more boot space, you can always fold down the 60:40 split-folding rear seats. 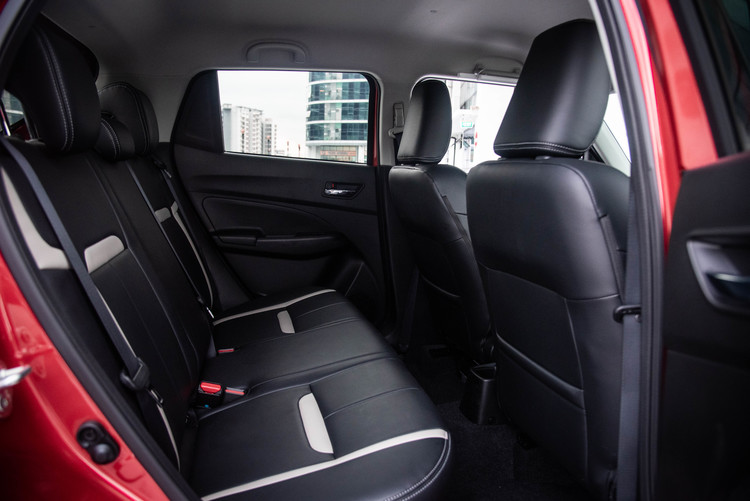 Speaking of the rear seats, you will find that there is actually sufficient space for two passengers to be seated in comfort, with enough knee room and space for the average Singaporean’s feet. Three-abreast seating should, however, be reserved only for the direst of situations—you’ll probably find your rear passengers wedged between each other and the rear doors.

For a sub-S$100,000 car, the Swift 1.2 Mild Hybrid actually provides a lot of kit for the money. For example, you get a nice sporty D-shaped multifunction steering wheel with paddle shifters, a 7-inch touchscreen infotainment system that has both Apple CarPlay and Android Auto functionality, and a colour LCD display between the dials in the meter cluster. 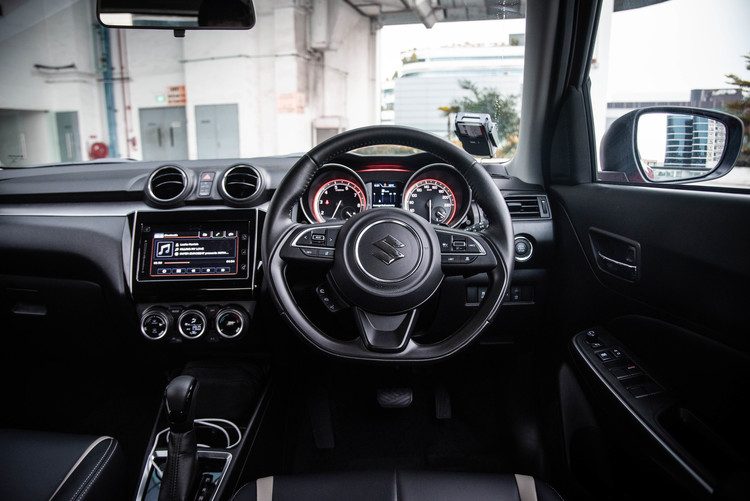 And then we come to the safety and assistive features. The Suzuki Swift 1.2 Mild Hybrid comes with the Suzuki Safety Support Suite, which encompasses a full gamut of functions: 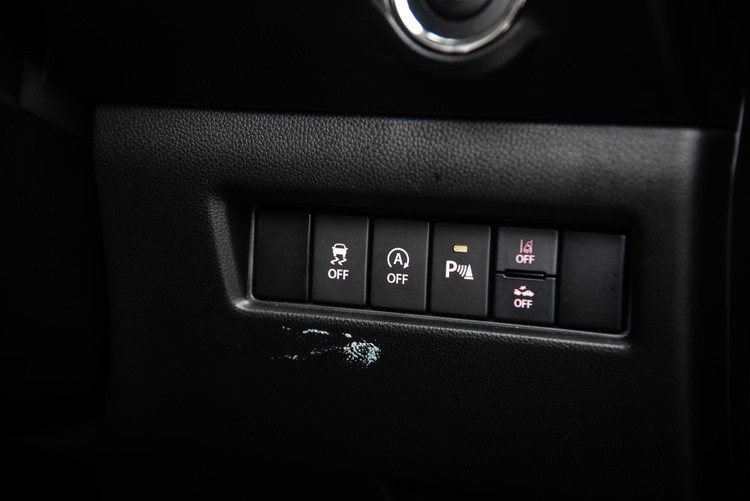 Pretty impressive, right? It’s a pity that Suzuki forgot to include some basic amenities while sprinkling the Swift with these high-tech features—there is no centre armrest or console up front, and almost all the touchpoints in the interior are hard, scratchy dark plastics (although a two-tone interior is available for an extra S$1,000). 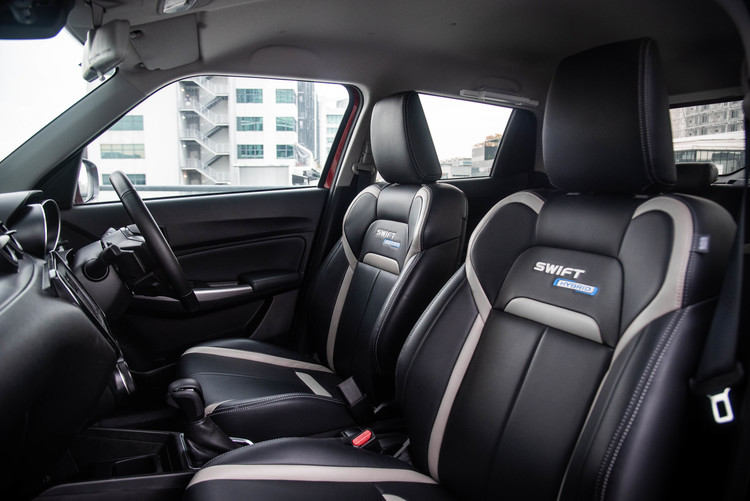 But hey, we did say that this is a give and take car, didn’t we? The features that the Swift 1.2 Mild Hybrid does have, in addition to the full suite of safety assist functions are only found in far more premium cars, but Suzuki has managed to pack them into a sub-S$100,000 price tag, despite recent COE hikes to stratospheric prices.

What’s really going to endear you to the car, however, is how the car feels when you’re driving it. 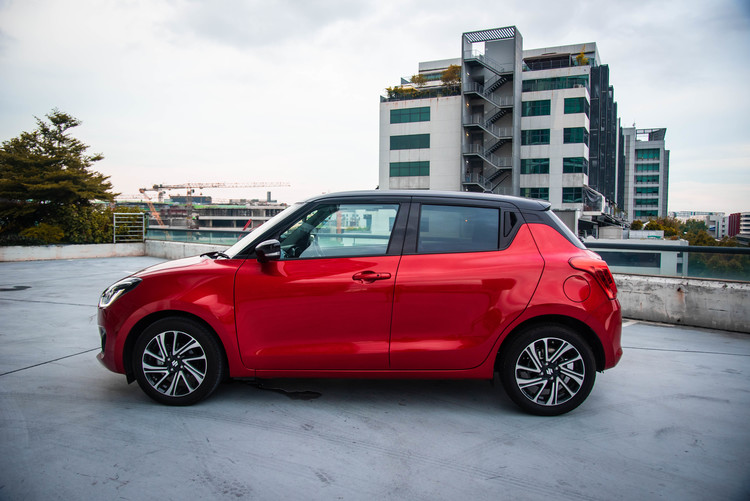 And then that’s juxtaposed against its 1.2 litre four-cylinder mild-hybrid powerplant, which produces only 80bhp and 107Nm of torque, and is mated to a CVT transmission. Does that mean that the Suzuki Swift 1.2 Mild Hybrid isn’t any good to drive? 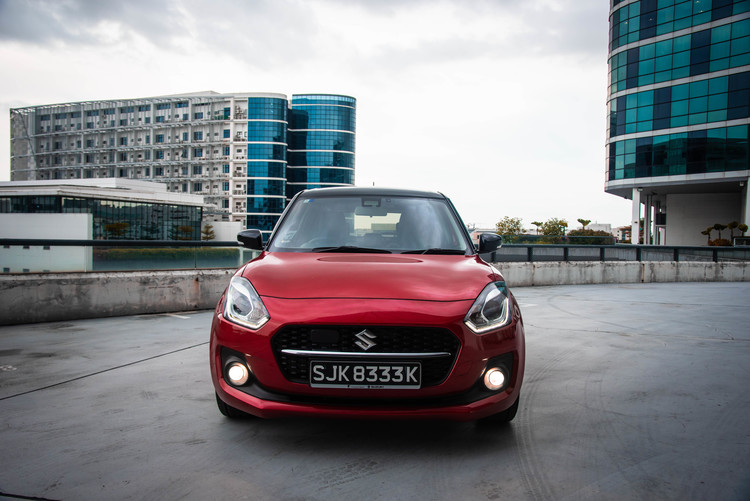 The throttle response can be rather unintuitive from the get-go, due to a combination of the mild-hybrid system kicking in and the CVT just droning on keeping the RPMs constant, but the Swift feels far peppier than its 12.2 second century sprint timing might suggest.

Furthermore, there’s not much mass to throw around, with the Swift 1.2 Mild Hybrid being a featherweight at just 999kg. Despite the Swift’s front MacPherson struts and rather crude rear torsion beam set-up, it handles corners like an absolute champ. 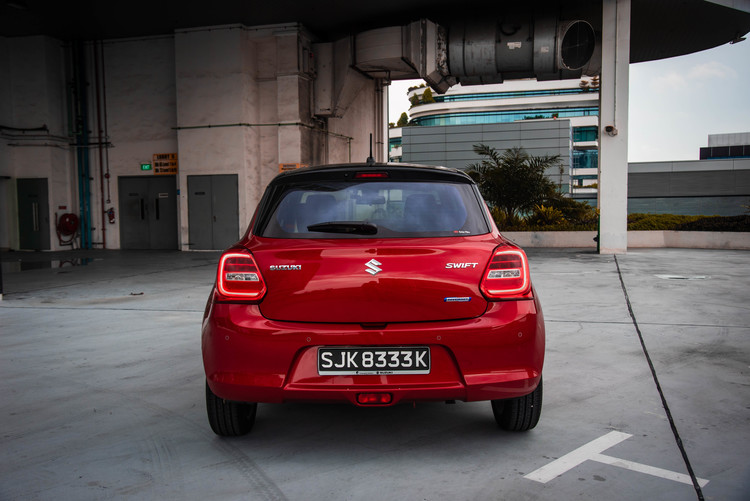 One thing that has to be pointed out, though, is that at lower speeds, the torsion beam can cause the car to feel rather light, and rear passengers will also experience a crashy ride over humps at those speeds.

The steering feels precise, although it is typically light like most electric power steering systems, and doesn’t exactly provide much feedback from the road. Turn-in is direct, and despite wearing eco tyres, the Swift follows through corners with no understeer, even at speeds that are slightly naughty.

More impressive is the fact that the Suzuki Swift 1.2 Mild Hybrid seems to forget that rain affects traction, and somehow still provides the same driving dynamics even on wet roads.

Clearly, Suzuki’s “HEARTECT” platform is a great base for the Swift Mild Hybrid’s well-sorted chassis, which is also shared with the hotter Swift Sport. 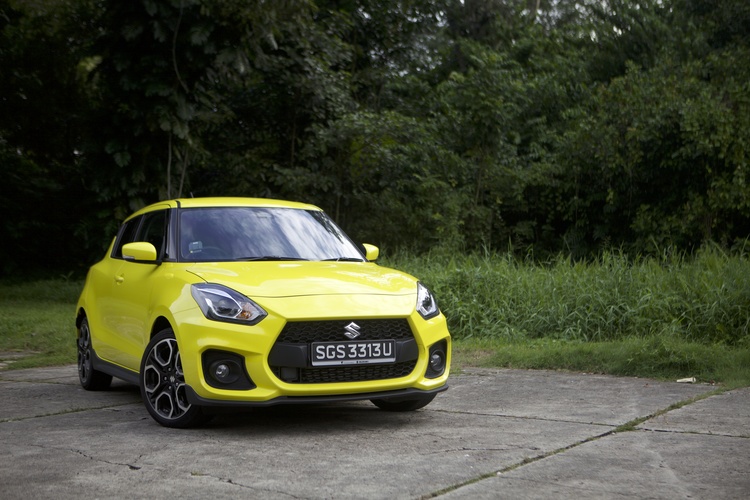 Our quick drive of the Swift Sport made clear that it certainly has more power to better complement the Swift’s great handling, but I think there is a point to be made about the Swift Mild Hybrid actually being the more fun-to-drive car for daily use.

We know not everyone might agree with us, but think about it: with less power, you’ll be able to wring the car to its limit—and that’s where things get fun—all while staying within legal speed limits.

On the other hand, because the Swift Sport has way more performance on tap, you’ll probably only be able to drive it at its limit on track, rather than on public roads (if not for COVID restrictions, Suzuki actually intended to launch the Swift Sport at Sepang to properly demonstrate its capabilities).

Coupled with the cost savings over the dearer Swift Sport, we could realistically see ourselves choosing the Swift Mild Hybrid as a “Swift Sport-lite” to have a lot of fun on public roads, knowing that in all likelihood, fully utilising the anaemic powertrain wouldn’t get our license revoked. 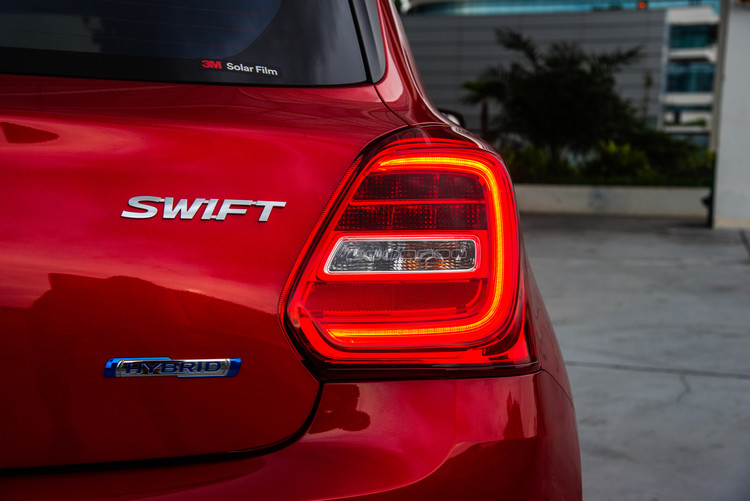 Despite its subcompact dimensions, the Suzuki Swift 1.2 Mild Hybrid can pass off as an adequate four-seater that has just enough boot space for the grocery run.

With more features than you would expect at this price bracket and that fun-to-drive feel, the Swift Mild Hybrid would certainly appeal to the budget-conscious enthusiast who’s looking for something that isn’t boring.

Prices are accurate at the time of writing. Photos in this article by @cookiesncremee