The New BMW X3 and X4 - Sportier, Modern and Digital 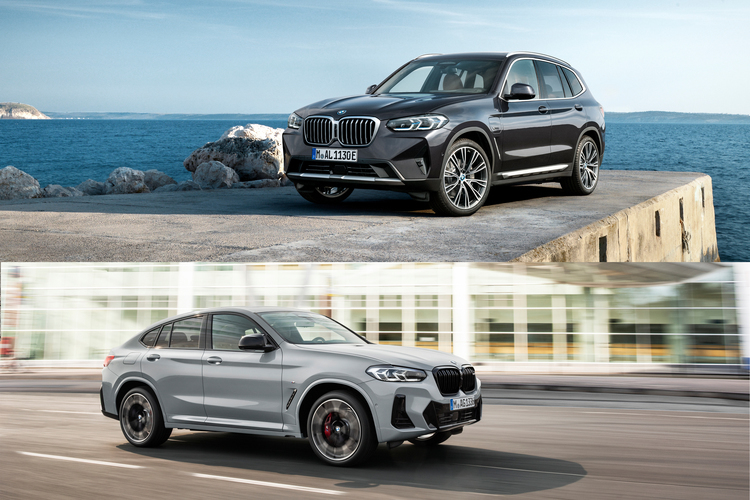 BMW has refreshed its successful X3 and X4 with new looks, improved equipment and a range structure which has been optimised for customers.

The refresh is rounded off with a modern interior with new equipment features and updated infotainment. 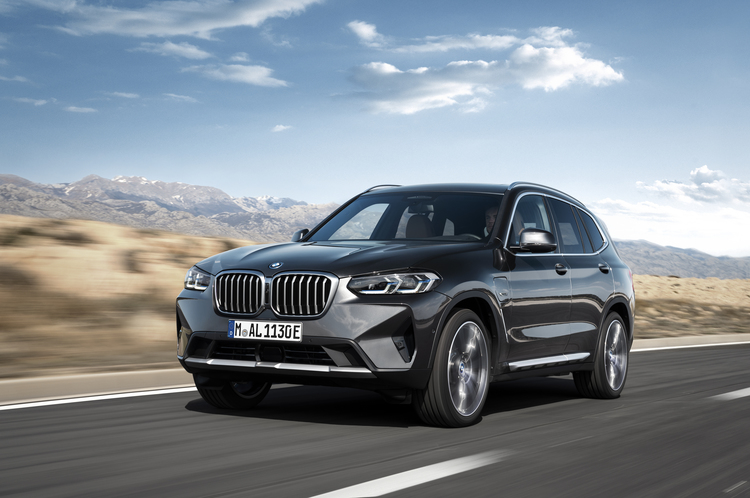 The new BMW X3 has an appearance that conveys a more powerful presence, with design changes emphasising classic X-elements. The BMW kidney grille and headlights have been redesigned along with the front and rear bumpers. High-quality X elements such as underbody protection and specific side skirts in the style of the previous X Line will be available as standard. 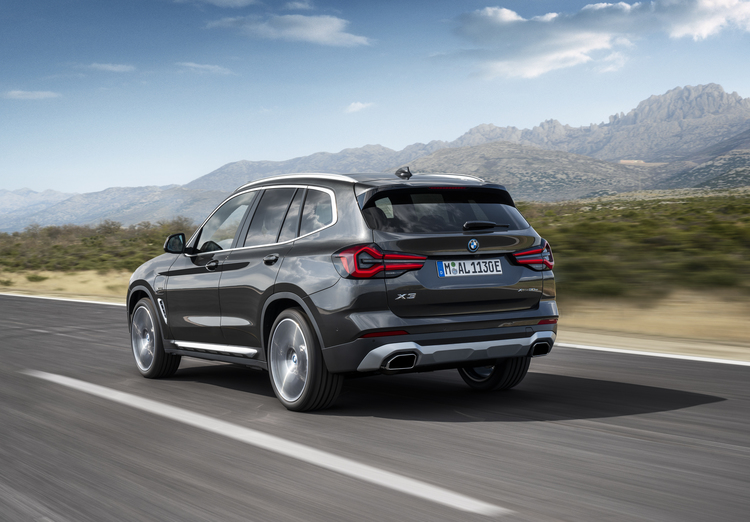 An optional M sports package can give the BMW X3 a sportier orientation, featuring extras such as significantly larger air inlets and inserts finished in high-gloss black.

The standard trim includes the new 19-inch Y-Spoke 887M alloy wheel in Midnight Grey Bicolor with 245/50 R19 tyres. Additional wheels in 20-inch and 21-inch are available as an option, and the M sports brake with blue or red brake callipers. 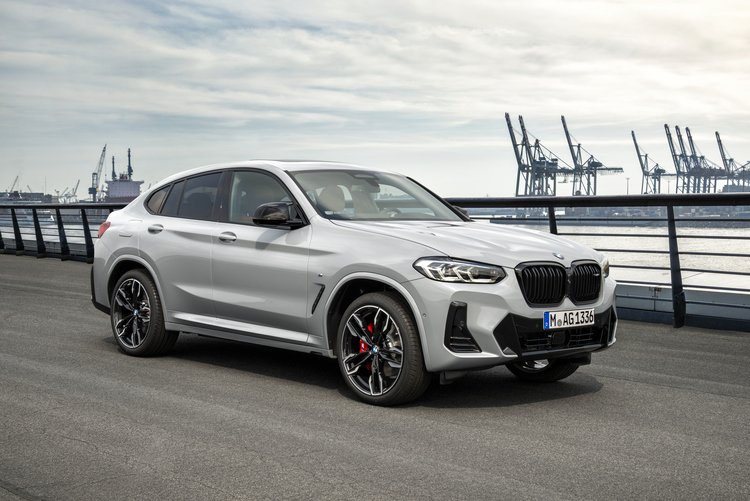 The BMW X4 adopts the new front end of the BMW X3 but adds an exclusive distinguishing feature in the form of the mesh kidney familiar from other sporty BMW models. Compared to the BMW X3, adaptive LED headlights come as standard, while the BMW Laser Light is also available as an option for the BMW X4. 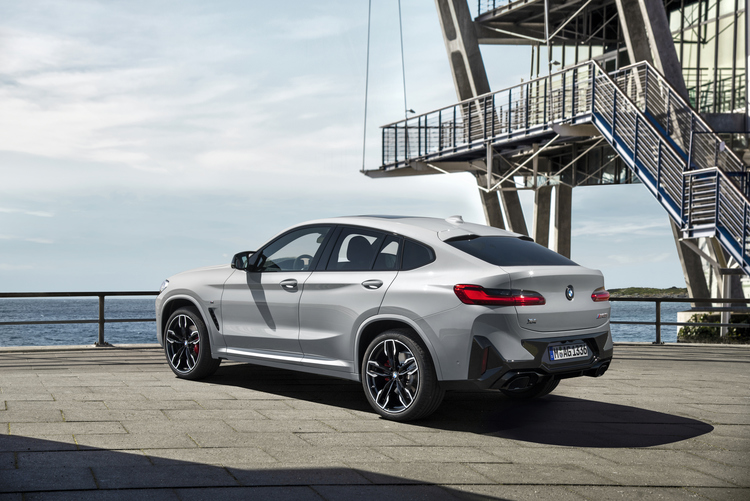 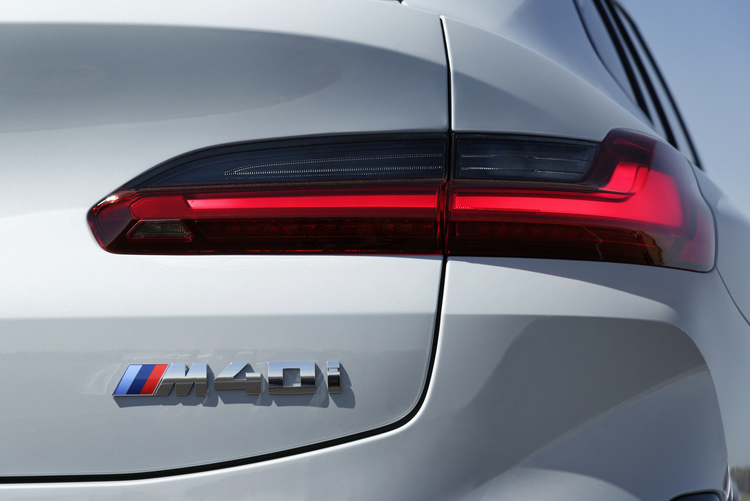 Featuring flat full LED rear lights that emphasise the vehicle width and protrude strikingly from the vehicle body in their three-dimensional design, the rear section now has an even more clear-cut shape in the BMW X4 revision.

As with the BMW X3, the M sports package includes the new 19-inch alloy wheel Y--Spoke 887M in Midnight Grey Bicolor with 245/50 R19 tyres as standard. Additional 20-inch and 21-inch wheels and the M sports brake are available as options. 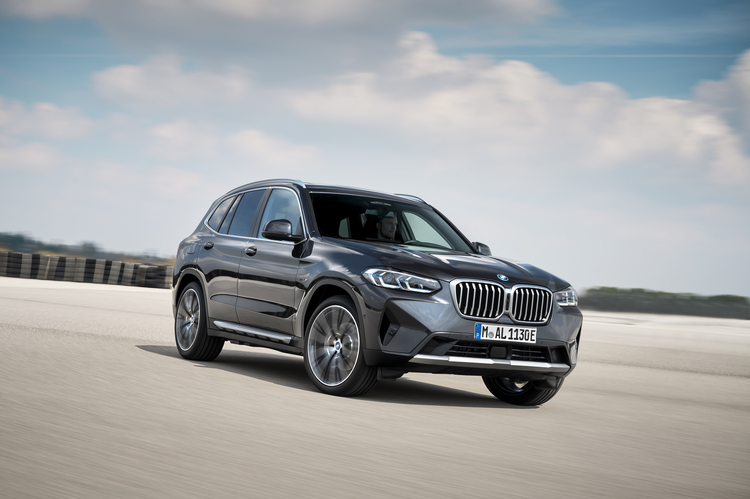 Following the redesign of the BMW X3, BMW offers a total of eleven paint finishes in the regular range. "Skyscraper Grey" will be a new colour, as well as "M Brooklyn Grey metallic" from the M sports package. These will be offered alongside the two BMW Individual paint finishes - Aventurine Red and Tanzanite Blue.

The new metallic finish Piedmont Red is available exclusively for the BMW X4. For the first time there is also a choice of numerous special BMW Individual paint finishes for both models, including matt finishes such as Frozen Deep Grey. 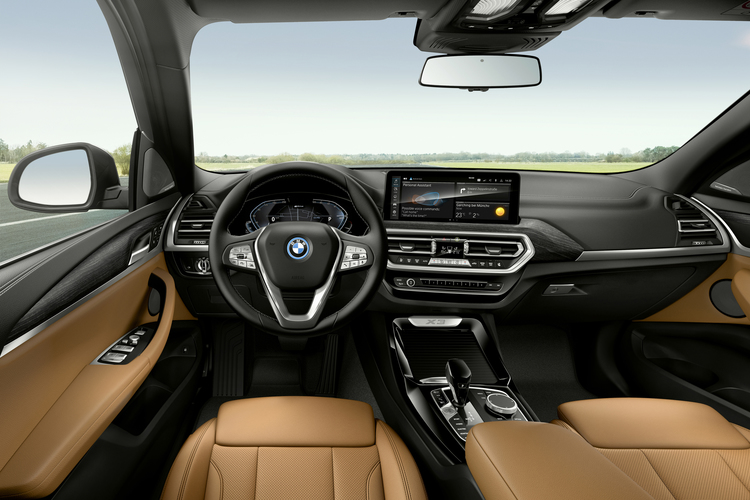 The new BMW X3 and the new BMW X4 adopt the same centre console of the current BMW 4 Series. The free-standing, central Control Display with touch function now offers a 10.25-inch screen as standard in all vehicles. A 12.3-inch version of the touch display is also available as an option.

To make the vehicle configuration process clearer and more straightforward for customers, the complexity of the equipment lines and optional extras has deliberately been reduced by 30 per cent. 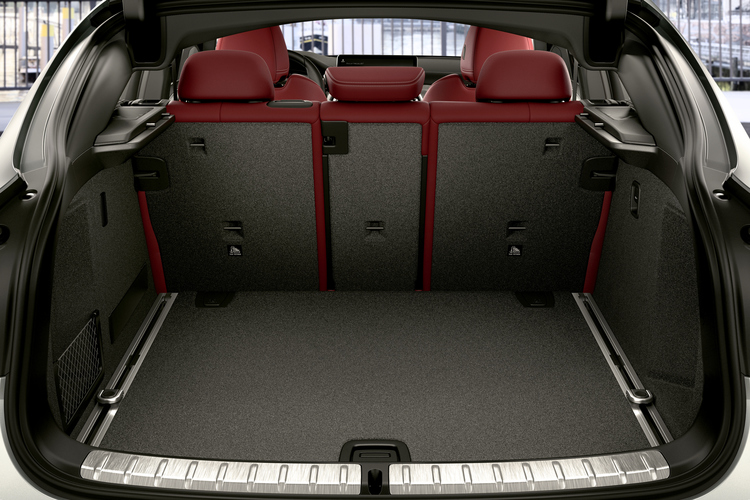 To increase seating comfort at the rear, the seats with 40:20:40 split configuration can be optionally and individually adjusted via the cargo function.

For connectivity, the BMW Live Cockpit Plus and BMW Live Cockpit Professional offer optimised wireless smartphone integration via Apple CarPlay and Android Auto™. Here, the driver can view important information reflected on the Control Display and also in the instrument cluster and the optional BMW Head-Up Display. 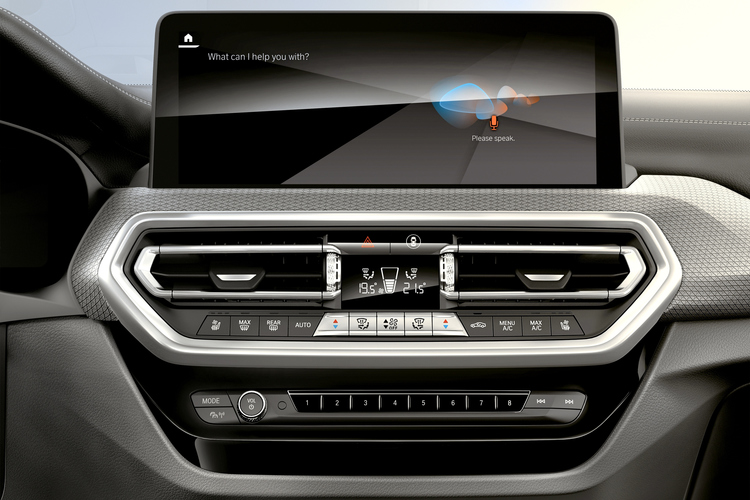 Additionally, integration with Amazon Alexa makes it possible to use Amazon's voice service inside the vehicle in the same way as the customer is already used to doing at home.

With the help of the My BMW app, which is available in over 40 countries for both iOS and Android operating systems, Amazon Alexa can be installed in the vehicle in just a few steps.

The My BMW App doubles as a universal interface to the vehicle. It offers information on the state of the vehicle at all times and depending on the options fitted, enables remote access functions such as vehicle location, locking and unlocking the doors or recording the vehicle’s surroundings (Remote 3D View).

Since 2018 and the introduction of BMW Operating System 7, it has been possible for drivers of BMW models to keep their vehicle constantly up to date with the latest software status using Remote Software Upgrade.

In the BMW X3 and BMW X4, upgrades can include different content from new services to improved vehicle features and can be downloaded "over-the-air". Furthermore, intelligent networking offers the option to integrate additional functions into the vehicle at a later date.

Hybrid technology for all engines 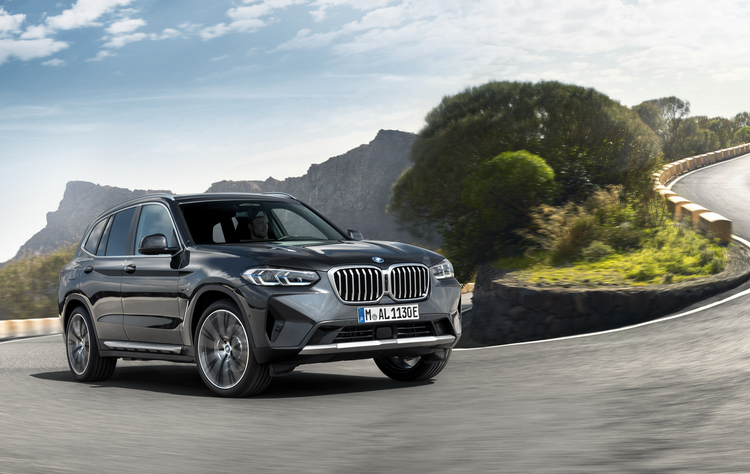 In addition to the BMW X3 xDrive30e with plug-in hybrid drive, which has been in production since December 2019, all 4-cylinder and 6-cylinder engines in the two model series now use 48-volt mild hybrid technology. This ensures better driving performance with lower fuel consumption and increased driving comfort. The energy stored in the battery can also be used for an electric boost of 8 kW/11 hp in addition to supplying the 12-volt on-board network.

Three diesel and three petrol engines will be on offer. Seven drive options are available in Germany for both the new BMW X3 and BMW X4, covering a power range from 135 kW/184 hp to 265 kW/360 hp. Exclusive to the BMW X3 xDrive30e plug-in hybrid model, a lithium-ion high-voltage battery enables the car to have an electric range of up to 50 kilometres. 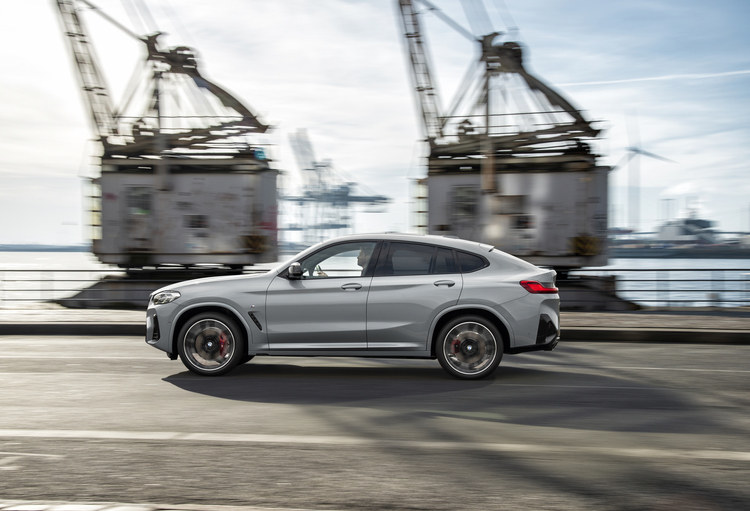 Fitted on all models, the BMW xDrive all-wheel drive makes a significant contribution to the versatile sporty flair of the BMW X3 and BMW X4, optimising both driving stability and traction over rough terrain. 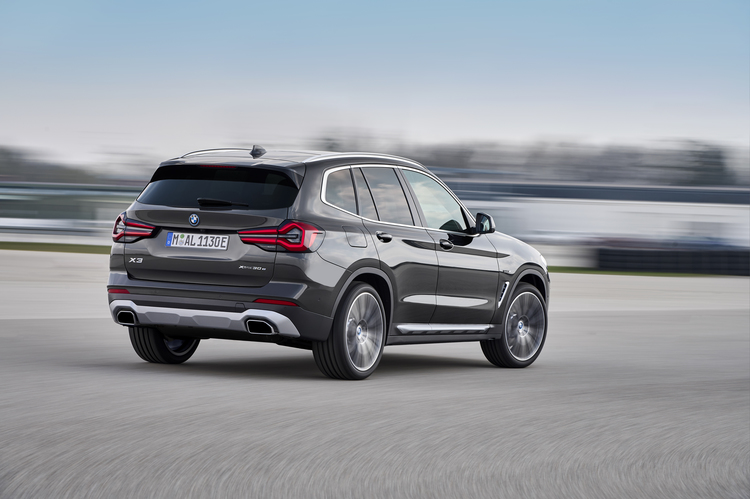 While pricing for the all-new BMW X3 and X4 have not been released at the time of this press release, BMW has indicated that they will start production in August 2021. Thus, expect the new models to arrive not long after, in Q4 of 2021.

Read More: May 2021 COE Results 2nd Bidding: Decrease in Premiums Except for Motorcycles