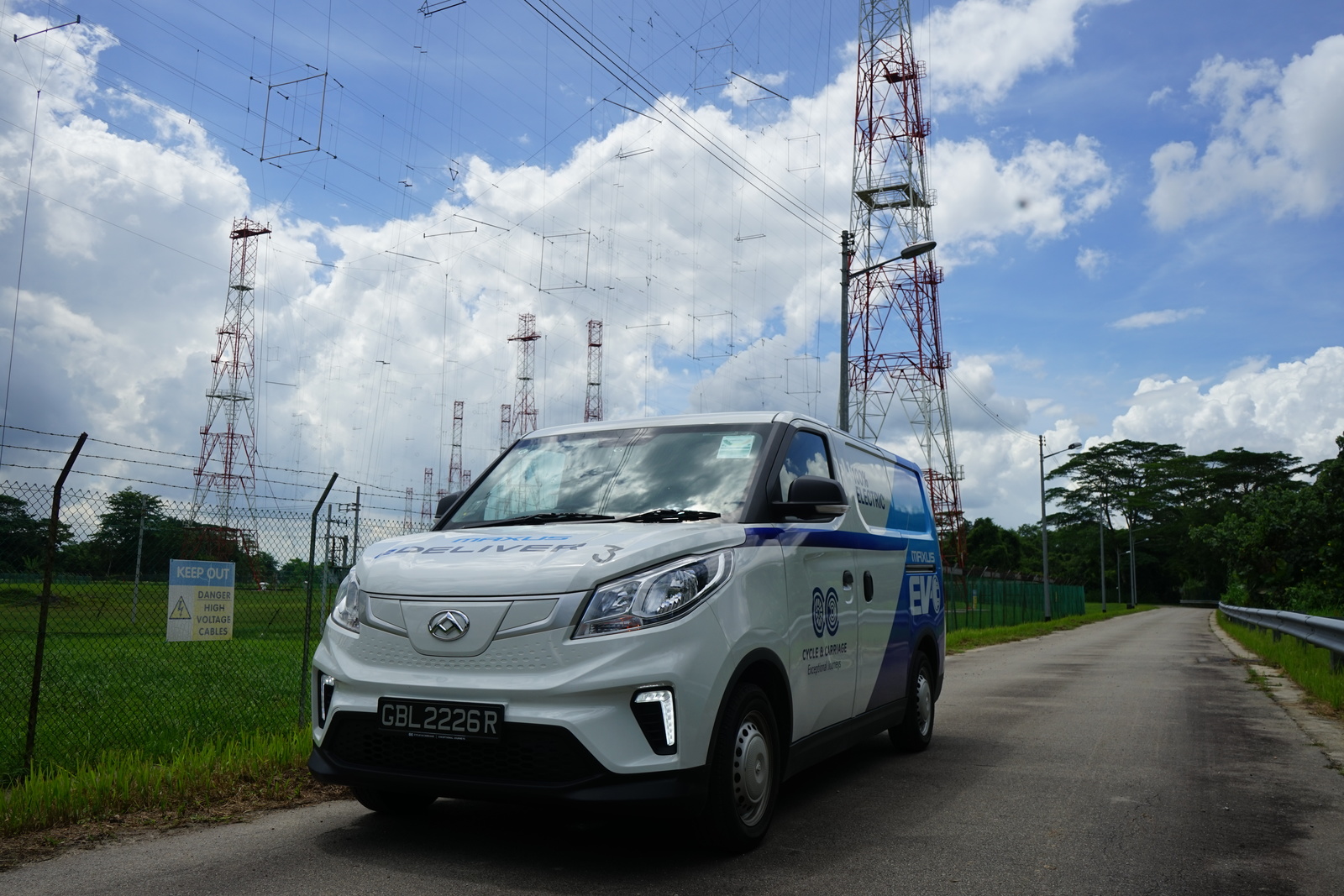 The Maxus e Deliver 3 is an electric van that truly delivers the goods.

I’m at the stoplights, and a heavily modified Audi pulls up next to me. But when the lights turn green, I whisk away silently, leaving the Audi behind.

You may think I’m in some expensive sports car, but no, I’m merely driving an electric van—the Maxus e Deliver 3. 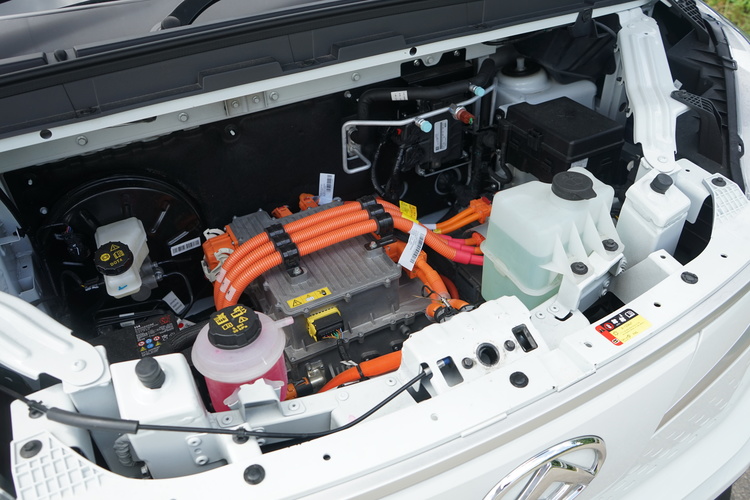 Such is the power of electric vehicles, with maximum torque available on tap instantaneously at any speed, at the simple prod of the throttle. In the case of the Maxus e Deliver 3, 120hp and 255Nm of electric power is available.

These may sound like rookie numbers, but remember that this is electric power, and the instantaneous response that the motor gives means that you get up to the legal limit of 70km/h faster than any impatient taxi or private hire vehicle that has the gall to consider tailgating you. 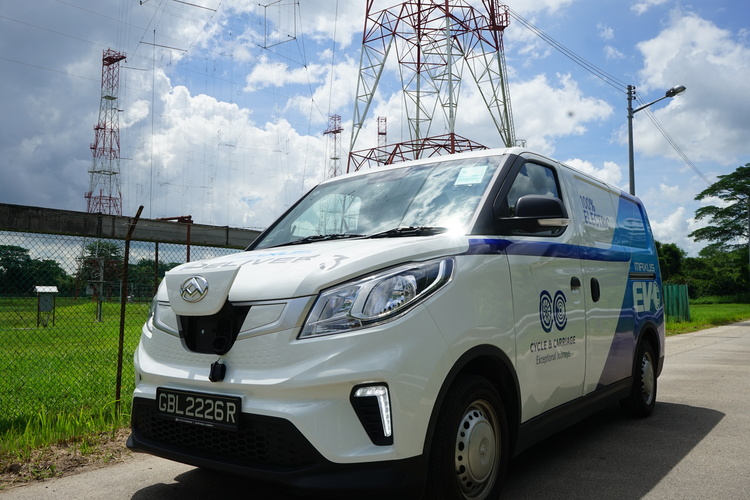 More importantly, the Maxus also possesses a WLTP range of 240km, which is extremely useable for the average delivery driver going about on their daily routes. If more range is needed, a quick 50kW DC charge can get the e Deliver 3 charged up to 80% from empty in just 45 minutes, just the right amount of time for the driver to have a lunch break.

A 7kW AC charging cycle can also deliver a full charge in eight hours, for when you leave the van overnight at the depot.

Now that the biggest concerns about range and charge time are out of the way, let’s look at how practical the Maxus e Deliver 3 is at carrying cargo. 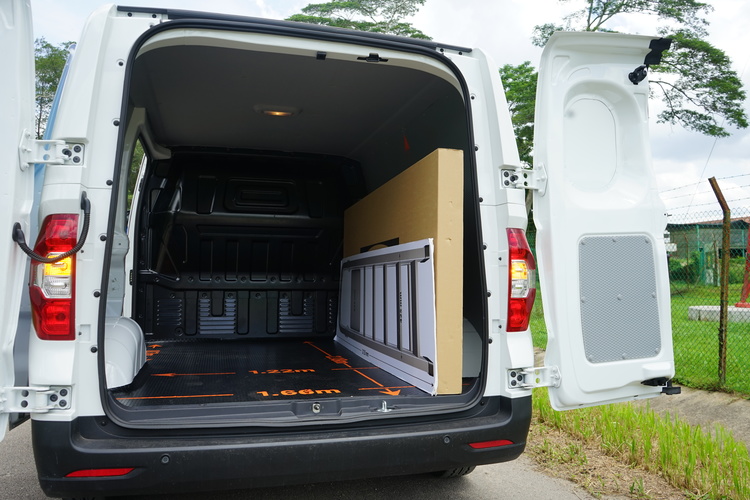 The e Deliver 3 can carry payloads of up to 905kg, and contain a volume of 4,800 litres, which exceeds the cargo-carrying capacity of some of its rivals.

Crucially, the cargo space also does not have any odd shapes, save for the protrusion of the wheel wells. 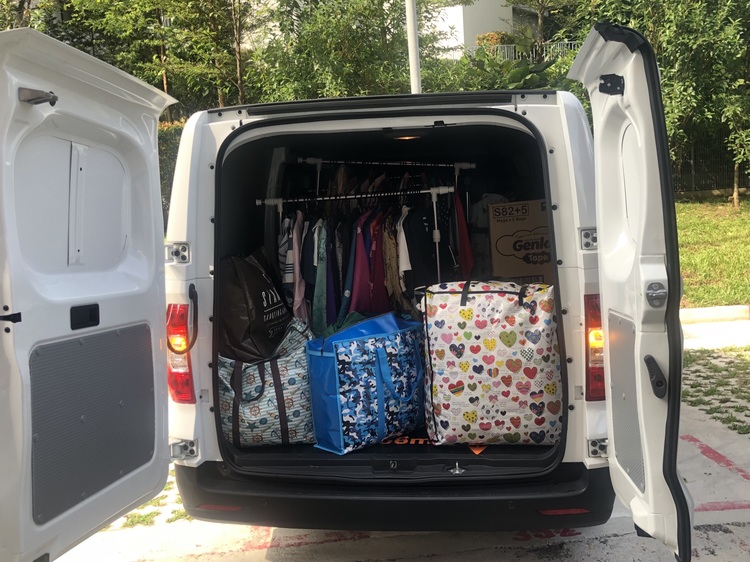 To put the e Deliver 3’s abilities to the test, we used the van to transport items to ground-up charity initiative Project Hills’ free flea market for needy residents living in rental flats. 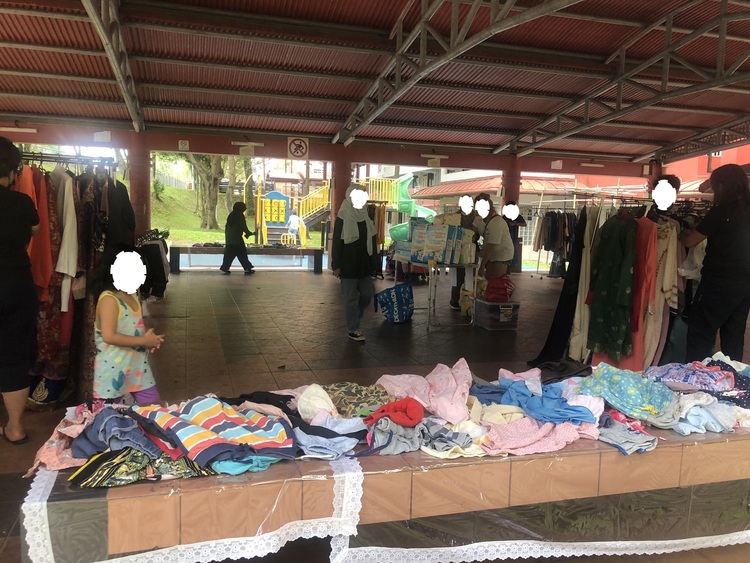 Moving the items around despite the van being fully loaded up was also a breeze, as the electric powertrain meant that the van wasn’t straining to move off and accelerate even when lugging around goods.

Of course, one should not expect car-like handling as with smaller vans, as the rear suspension uses leaf springs that causes the van to hop about when unladen.

However, this is also a problem faced by other large vans as well, and such set-ups are necessary to ensure that cargo vans are able to sustain the weight of goods when fully laden. 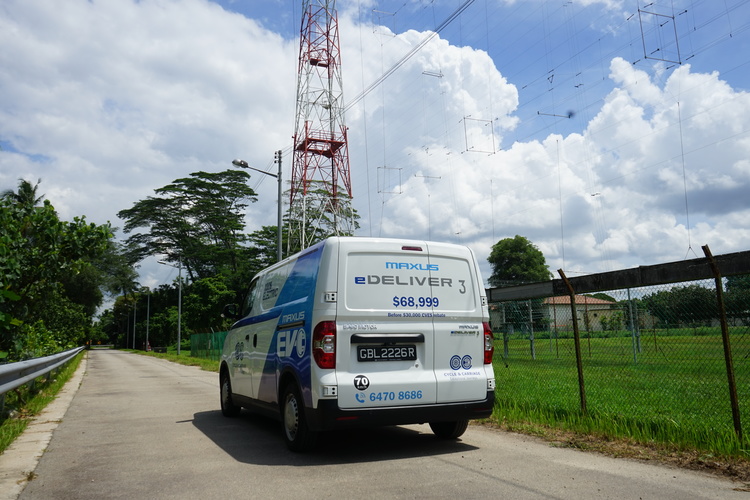 While one might not expect Mercedes-level creature comforts in the Maxus, the e Deliver 3 is also not as bare-bones as one might expect.

Although it is full of hard plastics, the dual-tone interior and the general layout and design of the cabin does not make it a bleak place to be driving in, and there are even niceties like a leather-wrapped steering wheel, USB charging ports, and cupholders. 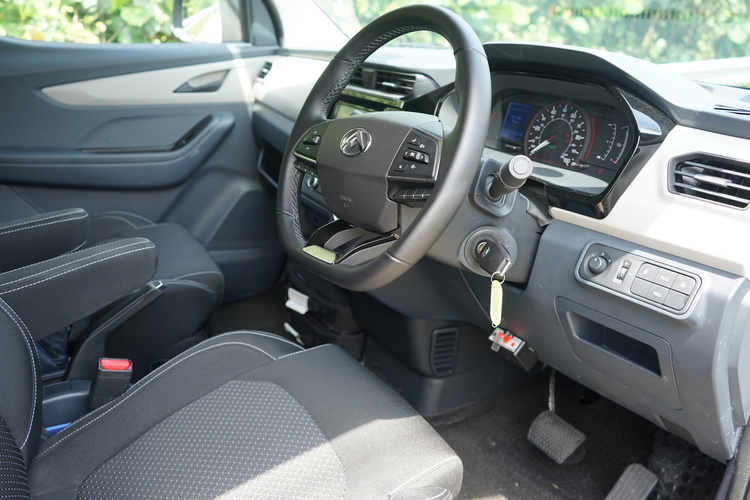 For example, there is a 7” touchscreen infotainment system that comes with both Apple CarPlay and Android Auto, auto headlights, and a reverse camera with dynamic guiding lines, along with a reverse sensor system. 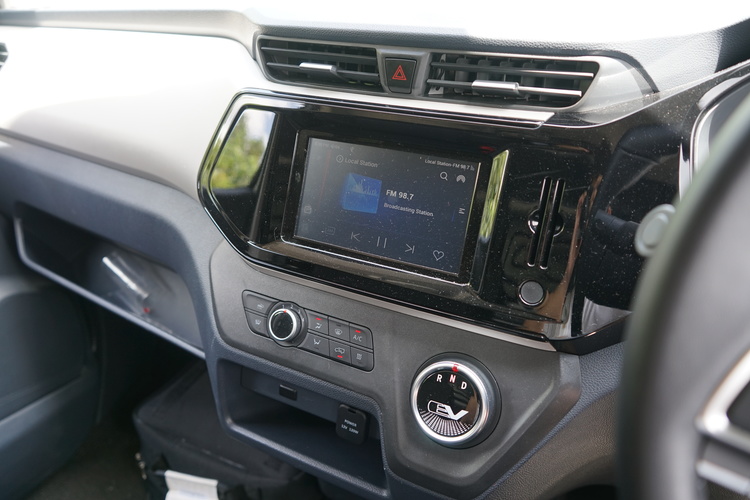 One strange quirk, however, is that the Maxus’ climate control is not only single-zone but single-temperature too: there is literally no way to control the air-con temperature, apart from adjusting the fan blower speed. 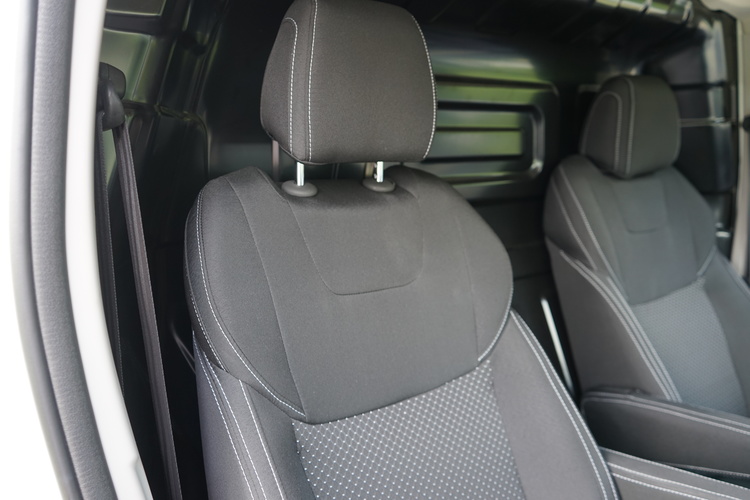 This quirk was surprisingly not a deal-breaker, as we found the Maxus to be sufficiently cooled no matter the outside temperature. 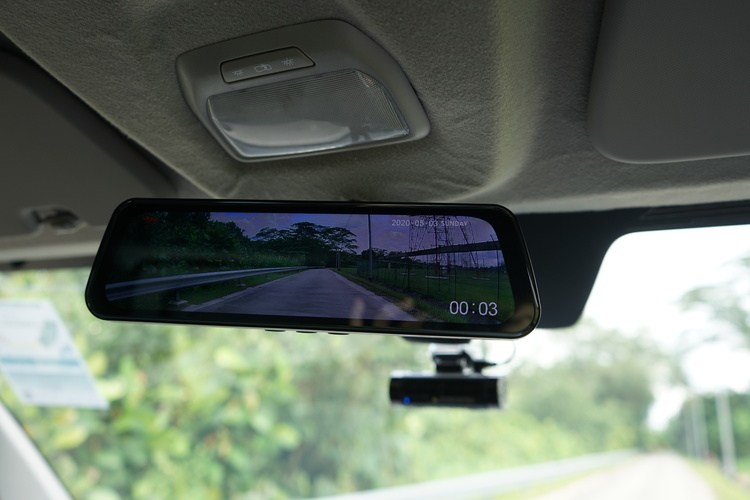 Additionally, there is also an electric rear-view mirror so that the driver can see what’s going on in the rear despite there being no rear window. A multi-function steering wheel also gives the driver access to audio and cruise control features. 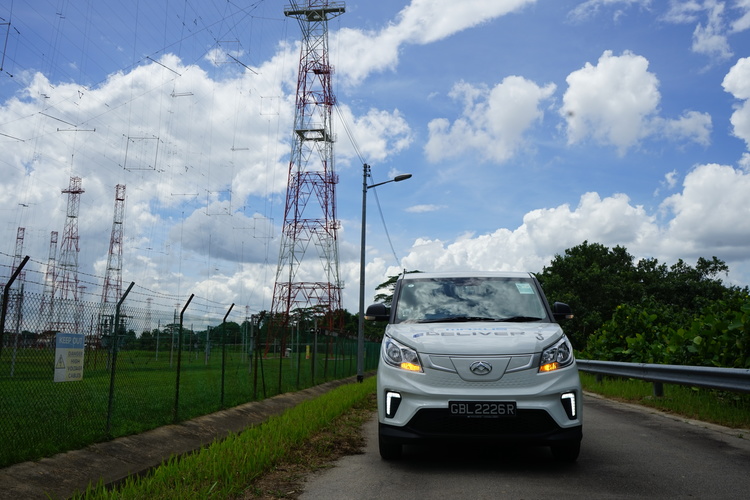 The e Deliver 3 carries an impressive amount of payload and does so effortlessly.

Furthermore, the van’s electric powertrain means that running costs over petrol and diesel vans will be lower, in addition to lower upfront costs due to rebates for electric vehicles.

The Maxus e Deliver 3 is simply an electric van that gets the job done and delivers the goods, and we simply cannot think of any higher compliment than this for a vehicle that’s meant to be a workhorse.

Find out more about the Maxus e Deliver 3 on maxuscnc.sg.