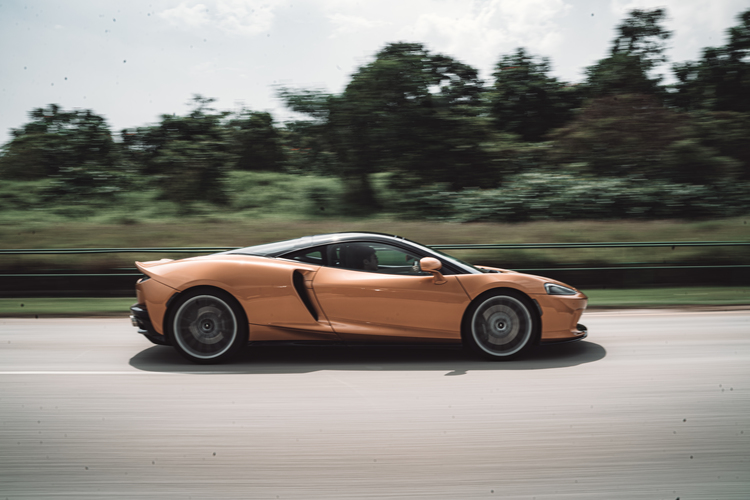 The McLaren GT is refined and dignified as a Gran Turismo should be, yet its genteel manners belie proper supercar levels of performance.

What's in the classic Gran Turismo rule book? Something British or Italian perhaps, with a sonorous V8 up front, an exquisite cabin in the middle, and plenty of boot space in the rear.

Clearly, McLaren forgot to read the rule book when they created the GT, a low slung mid-engined 612hp V8 that goes from 0-100km/h in just 3.2 seconds, and has one boot up front and another in the rear.

Oh, and as though that wasn't enough, they've also given it their iconic dihedral doors. All this makes the McLaren GT seem more supercar than grand tourer, so does it truly live up to its nameplate to deliver a comfortable GT experience? 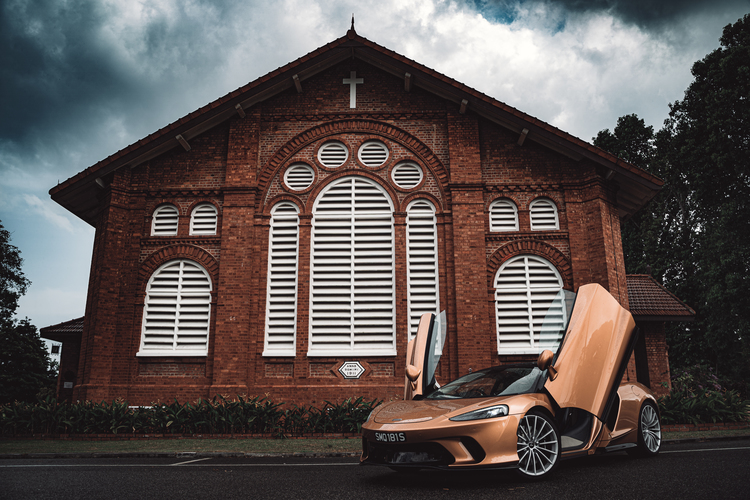 The cabin of the McLaren GT is wrapped all around in luscious Nappa leather, and bathed in ambient lighting. Everything feels tightly screwed and the build quality feels excellent, on par with any other GT car out there.

The choice of materials used is excellent, with minimal plastics present--for example, the paddle shifters are made out of solid metal. 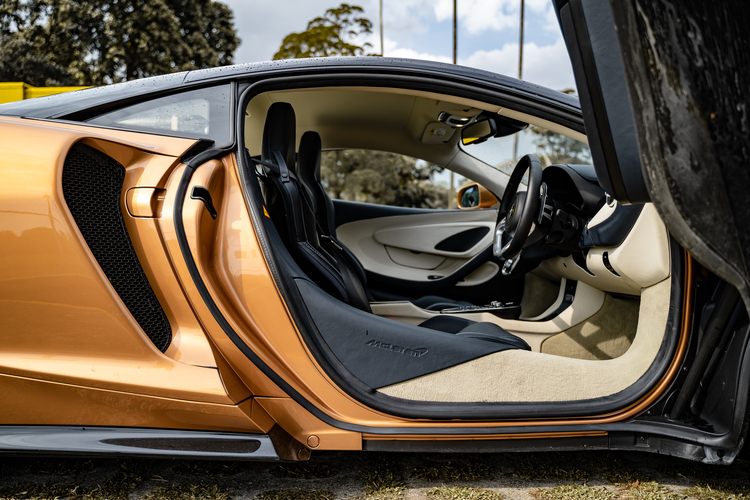 The seats of the GT use the same carbon frame as on McLaren's 720S supercar, but are more heavily padded to provide additional comfort. Once you shut the door, the seat whirs you electrically into your driving position. And then you start the engine. 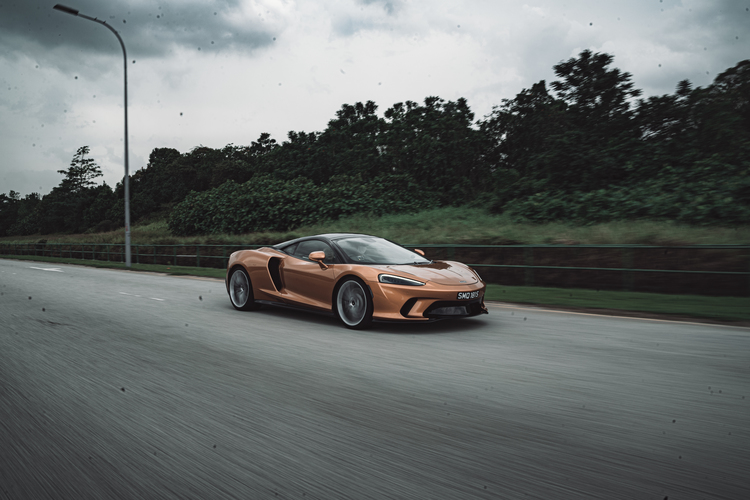 Once you start the engine, the 4.0 litre twin-turbo V8 burbles to life, and you will be able to hear the faint whine of hydraulics. Unlike most cars, the McLaren GT still uses a hydraulic power steering system.

Despite the GT's footprint of 4.7 metres making it longer than any of the cars in McLaren's Sports or Super Series cars, it is surprisingly easy to place and see out of.

Contrary to what one might expect of such a low-slung coupe, blind spots are not major, and this is in part due to there being a panel of glass in the C pillar to see through.

However, the GT has a rather large turning radius of 6 metres, making tight turns and multi-storey carparks slightly challenging to negotiate. 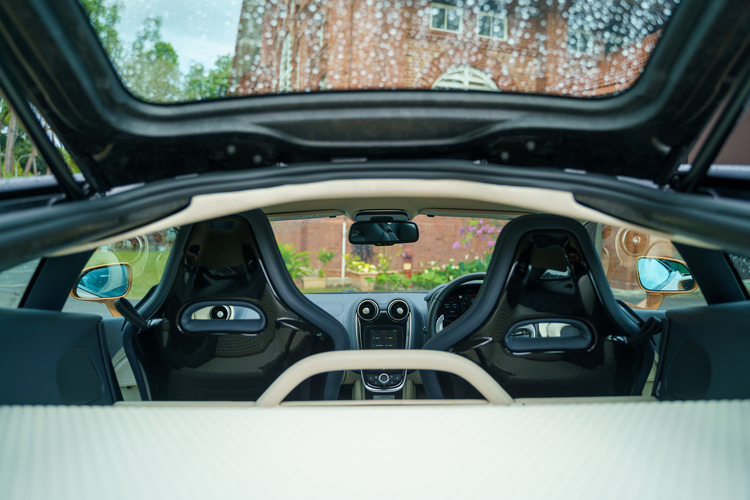 Moving off in Comfort mode, the GT feels like any other GT car: calm, smooth, and well-damped, bar the faint rumble of the engine situated right behind the cabin.

Perhaps the most remarkable characteristic of the McLaren is that there really isn't much to remark about it in its most comfortable setting - it simply feels like any other "normal" GT car out there, with comfortable damping, smooth gear changes, and a refined feeling all round. 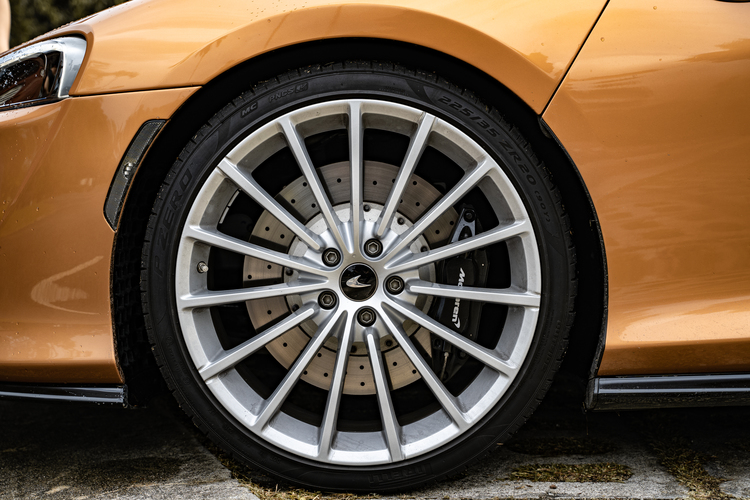 The only hint that this car has a lot more potential to unleash (apart from the fact that you're sitting in a mid-engined McLaren) is the brakes, which require a lot of of effort to step on.

McLaren say that the brakes have already been optimised for everyday ease of use, especially for low speed driving, but the pedal resistance still feels excessively strong for something that touts itself to be a GT car.

Then again, the upshot to this is that brakes provide supremely good modulation and precision when you really want to bite on them, and this is necessary, especially when you put the car into Track mode and do proper spirited driving. 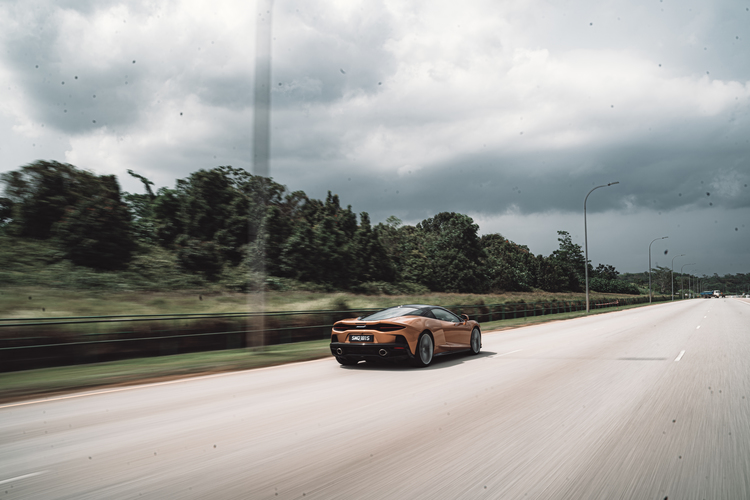 Up to this point, the McLaren GT is a refined gentleman at an evening party. But toggle the drivetrain and suspension modes into Track mode, and this gentleman takes off its cufflinks and is immediately ready to dish out a few good knockout blows.

Upon activating Track mode, the digital dashboard changes its display for a more race-optimised layout, and the GT's active exhaust valves open up, giving the car a deeper exhaust note, even at idle. 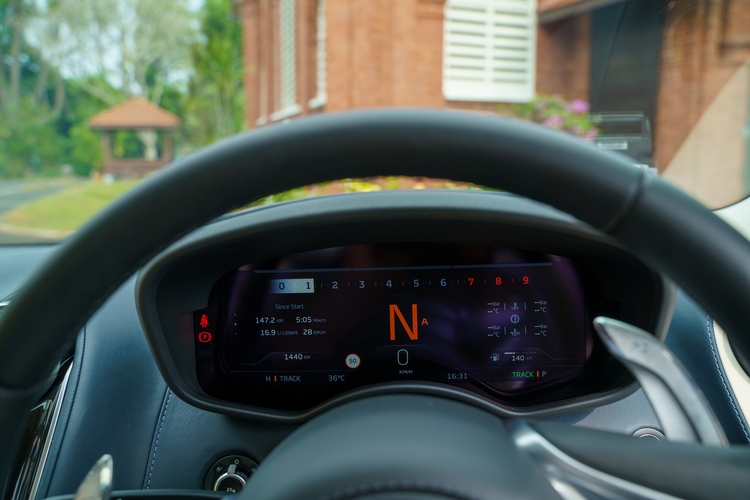 Step on the loud pedal and you're rewarded with a full-fat V8 symphony, while the turbos provide an entire gamut of aural experiences depending on how hard you step on the throttle.

Give the McLaren GT the beans and let off the throttle; the turbos will sound like squirrels that have been fed crack cocaine. 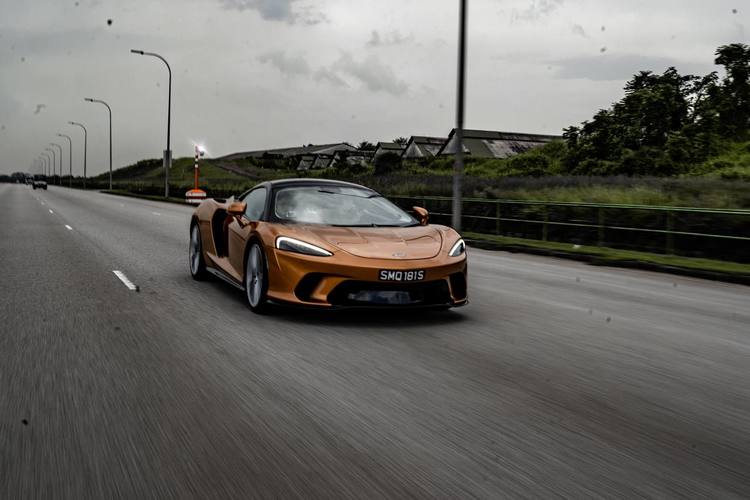 One striking characteristic of the GT is how analogue it feels, from its hydraulic steering feedback, to even the way the twin-turbocharged V8 responds.

Even though the figures suggest an output of 612hp and 630nm of torque, propelling the car from 0-100km/h in just 3.2 seconds, the GT doesn't feel all that quick when you first step on the throttle.

Much like turbocharged cars of yore like the Ferrari F40, a significant turbo lag can be felt before the power really kicks in and pushes you back into the exquisite leather-wrapped carbon seats.

When the power does kick in, however, you really get to feel the visceral power of the V8. 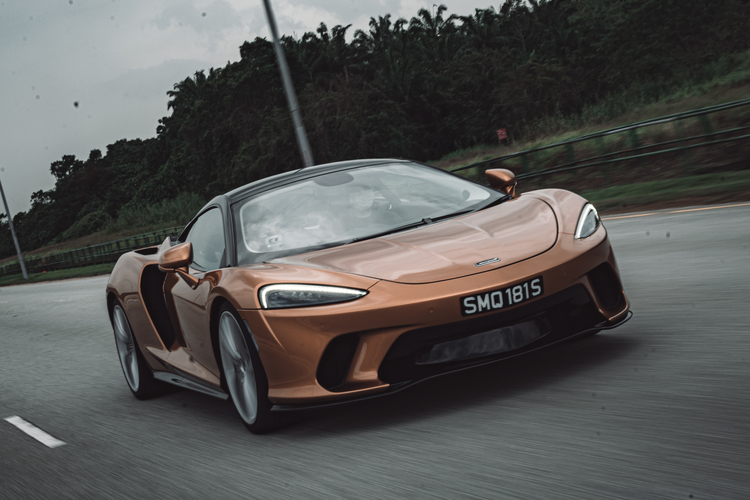 Adding to the analogue experience is the traction control system, which unlike most modern cars, allows you to have a bit of fun, even when the system is not deactivated. The traction control allows the rear wheels to skit and spin a bit before it catches you back, giving you both the ability to have some fun while still having the electronics bring you back in line.

And boy can you feel what's going on between the wheels and the road, with the GT's hydraulic power steering giving you good feedback, and precise turn-in control.

Coupled with the MonoCell II-T carbon fibre structure, the body rigidity is so stiff that one can feel the entire car going over bumps as one solid piece, with no noticeable body flex at all. 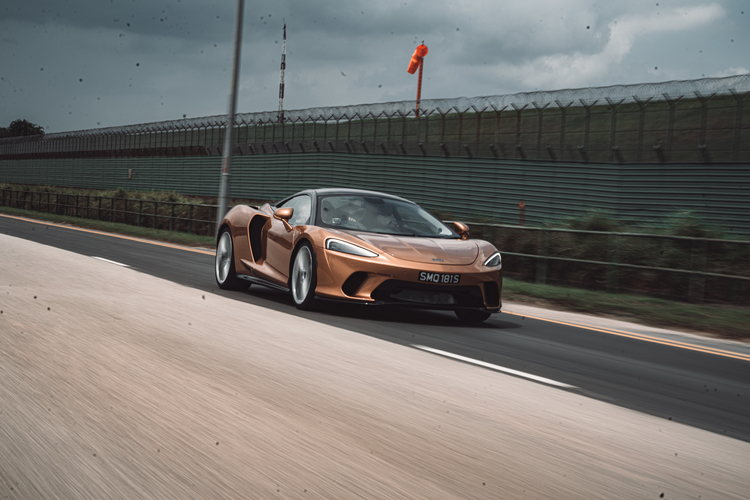 With excellent steering and chassis fundamentals, the GT feels extremely sure-footed in corners, turning in beautifully and tracking where you want it to go.

There is only the slightest hint of understeer when going into corners at inappropriate speeds, before the car sucks itself into the corner with some throttle control.

Of course, this level of purity in driving experience cannot be achieved without a good suspension system, and this is provided by front and rear double-wishbones on the ProActive Damping Control suspension system, which uses sensors to read the road ahead and react within two milliseconds. 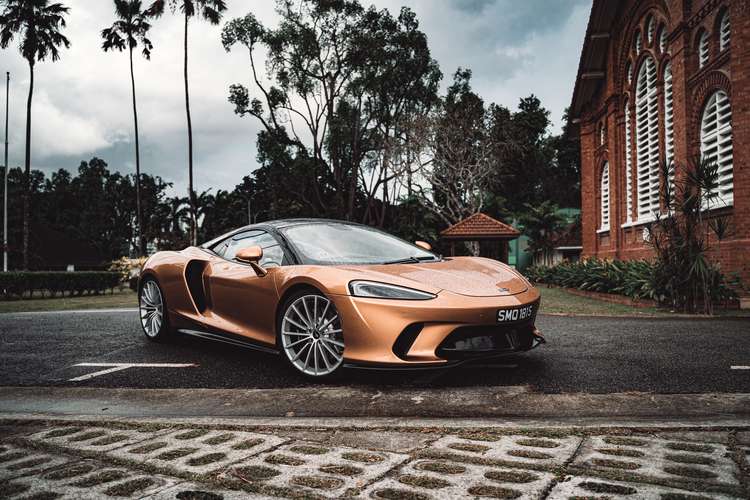 Whereas the system provided the GT with a supple ride in Comfort mode, in Track mode, the suspension properly stiffens up to give you the confidence to tackle bends and truly feel the every detail on the road travelling up through the carbon fibre MonoCell and hydraulic power steering.

Honestly, turbo lag aside, the performance credentials of the McLaren GT is so good in Track mode that we can't fathom why one might need to purchase a "real" supercar like McLaren's own 720S, especially when you can dial down the craziness to make the GT a liveable day-to-day comfortable cruiser in Comfort mode after you're done with the hard driving.

We will be testing the 720S soon, and perhaps McLaren may surprise us with an even more hardcore driving experience in their purpose-built supercar. 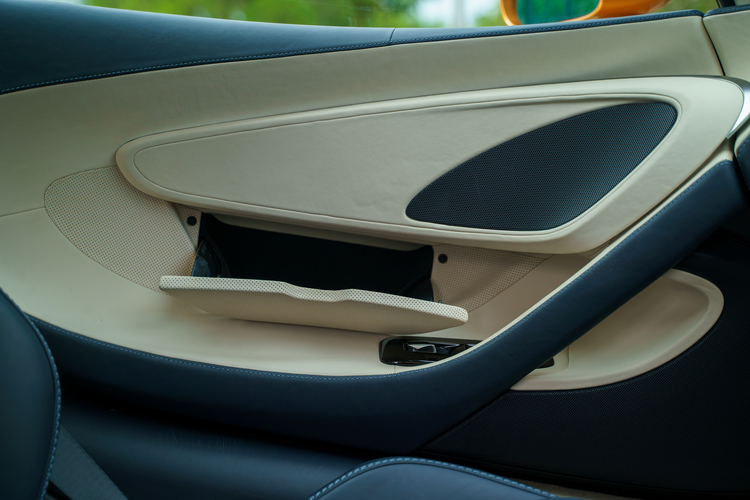 Despite the GT's low-slung profile and dihedral doors, the interior is actually quite practical. In fact, there are three cupholders to be found in the car, even though there are only (obviously) two seats.

There are also clever storage spaces hidden in each door for your sunglasses, everything knurled aluminium control is well-damped and appeals to the tactile senses. 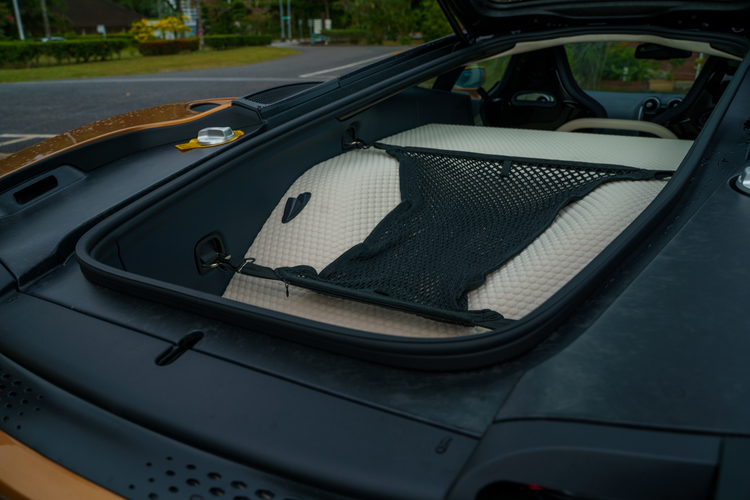 For a mid-engined car, the McLaren GT possesses a surprising amount of boot space, with 420 litres of storage space in the rear right above the engine, and an additional 150 litres of space up front giving a staggering 570 litres of total combined cargo space! 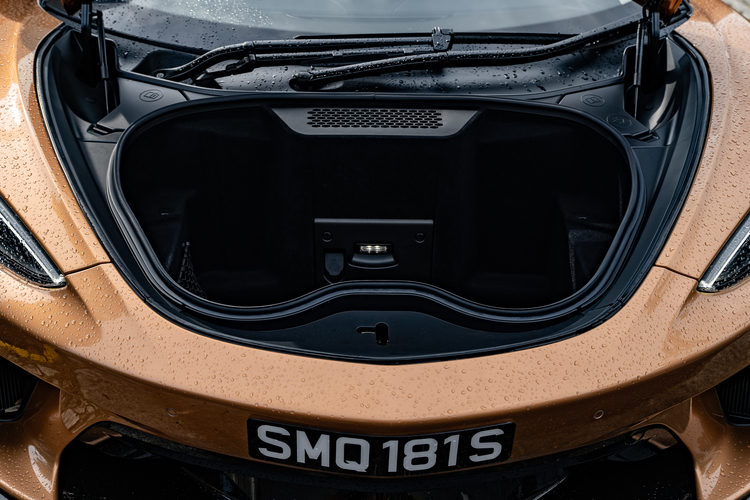 The vertical infotainment screen is also extremely smooth and intuitive to use, and although it lacks Apple CarPlay and Android Auto functionality, it does have Bluetooth connectivity and a navigation system with real-time traffic information. 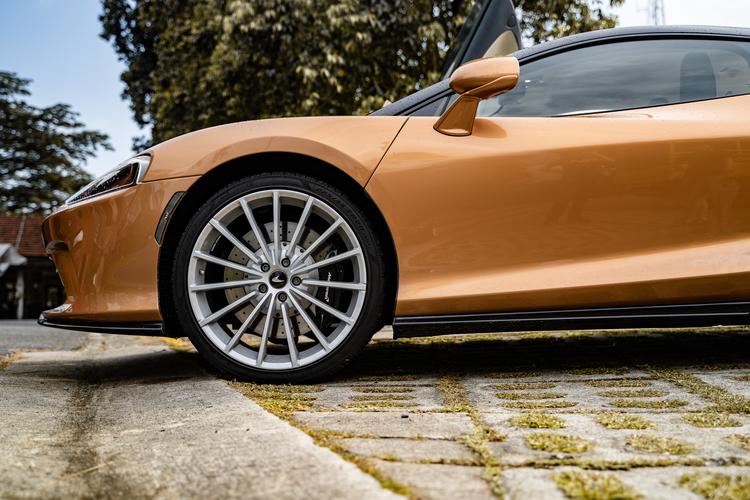 The McLaren GT with the vehicle lift system activated

Finally, if the McLaren is to be a practical GT car, then it cannot be scraping over every single hump and slope like a conventional supercar would. On this front, we are happy to report that potential owners need not worry about this problem.

The standard ground clearance of the GT is 110mm, and can be increased to 130mm with the vehicle lift system (McLaren tell us that is equivalent to the ground clearance of a Mercedes C-Class), at which point the car looks comically like an off-roader.

In our experience, though, the GT clears the highest of humps without even requiring the activation of the vehicle lift system. 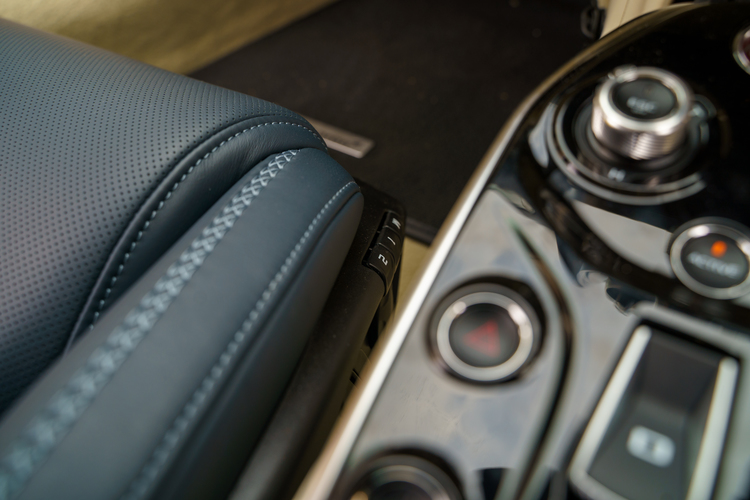 Of course, solely from a standpoint of practicality, there are still some quirks about the McLaren GT that we wish were sorted.

For example, the electric seat controls are so hard to access that getting into the right driving position is sometimes a hassle (our photographer could not even find an angle to get a shot of the controls!), and with the brakes requiring quite a fair amount of effort to step even when the car is stationary, we had hoped for an auto-hold function. This is meant to be a GT car, after all. 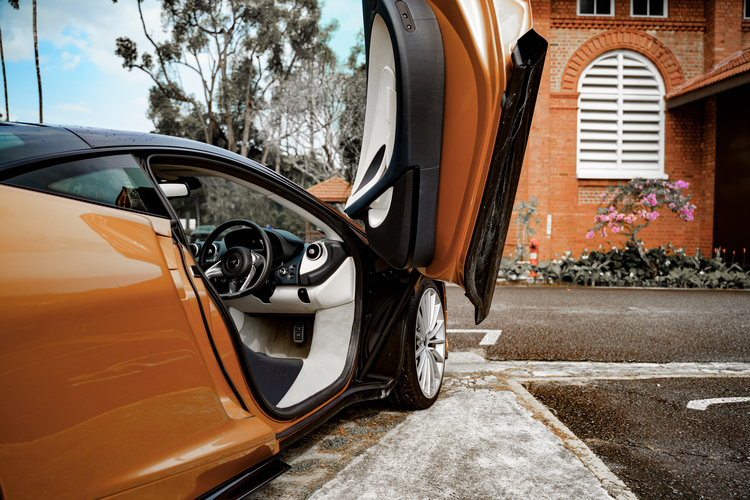 The McLaren GT is genuinely a car that has carved a niche for itself. Even McLaren themselves can't quite name a direct competitor: what other Gran Turismo car is there which is genuinely as easy-to-live with, practical, mid-engine, and possesses supercar levels of performance?


With other GT cars, you just won't feel as special or get as many eyeballs glued to you as you cruise down the road as you would in the McLaren GT. The gorgeous cab-forward mid-engined car design and that deep luscious Burnished Copper colour is just amazing to stare at, even when the GT is stationary.

Furthermore, with their recently-launched Guaranteed Future Value Programme, McLaren Singapore will buy-back GTs within the first 2 years of purchase at a fixed value agreed upon at time of purchase, guaranteeing a fixed annual depreciation on the GT.

If you can afford it, there really isn't any reason to not want to snag yourself this "everyday McLaren".

With genuine claims to being a practical Gran Turismo while delivering supercar performance, the McLaren GT truly allows you to have your cake, and eat it. 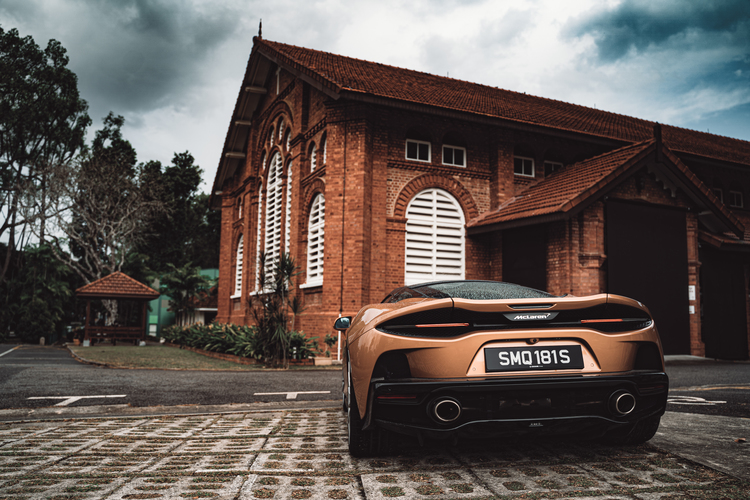 Photos in this article by: @jabariphotos