In The Passenger Seat: Issac Teh, From A Toyota To A Ferrari 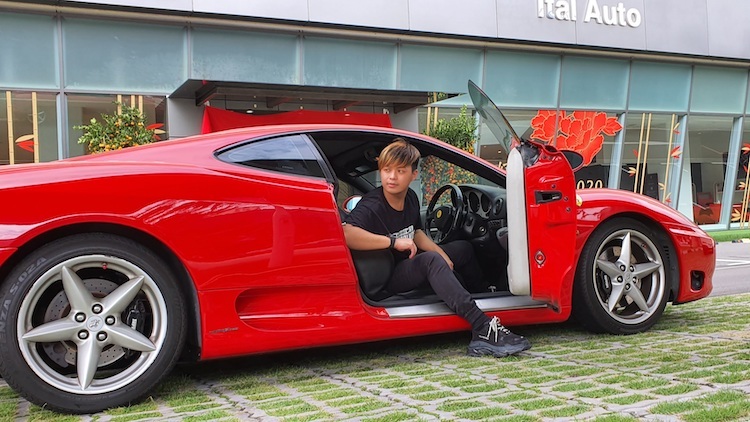 A Toyota SW20 MR2 and a Ferrari 458 come from two extremely different countries but with the similarity of their rich history of cars. In this episode of “In The Passenger Seat”, we have Issac to share his account of sitting behind the wheel of two very different types of cars.

Issac Teh, first caught our attention when we saw a video of the MR2 called "Blackbird" on Instagram. By diving deeper into his profile, we discovered that he was also the owner of a Ferrari 360 and even recently bought a Ferrari 458.

Issac is also part of the Ferrari Club Singapore, and we're very excited to have him on "In The Passenger Seat" to get some insider information about such an exclusive club, including some of his incredible stories to share, of course! 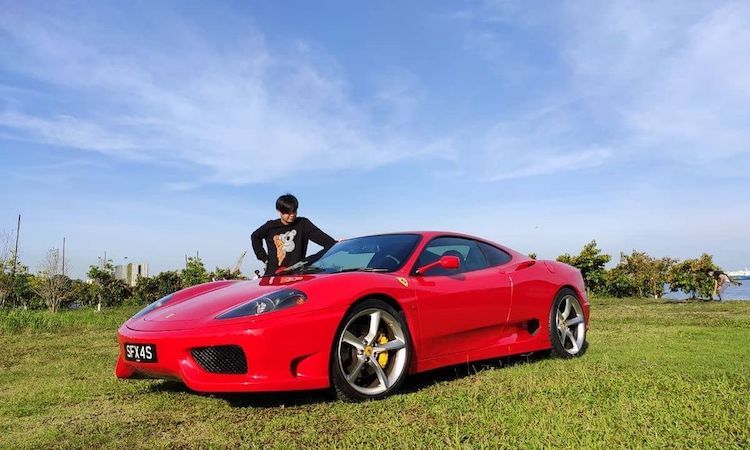 Hi! I'm Issac Teh & I just hit 26 a few days back! I'm an entrepreneur & a bit of a conceptual designer!

For the people who don’t know, what car are you driving now, and what’s the story behind choosing it? 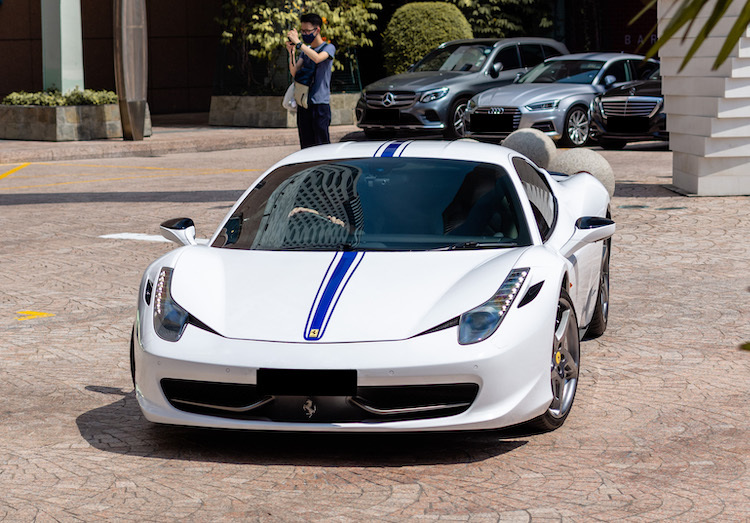 I am currently driving a Ferrari 458, coming from a Ferrari 360 just a week back!

Oh, the story of buying my first Ferrari is funny really, my then-girlfriend (now wife) dreamt that I bought a Ferrari a year back. I remembered telling her, "That's a good idea!" and the rest is history.

When you finally got the keys to your Ferrari 360 and took it out for its initial spin, what thoughts were running through your mind? 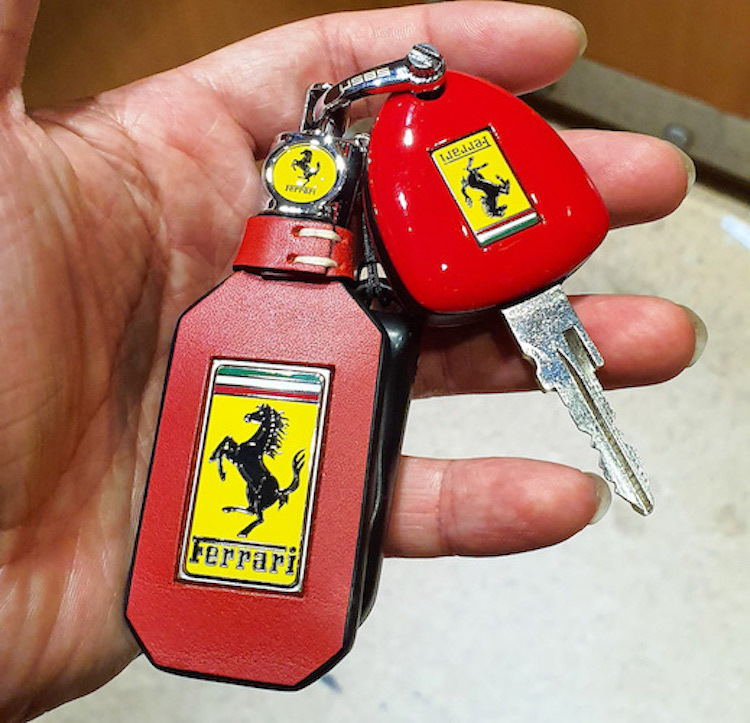 When I first collected the 360, it was like a dream. I was sleepless for a few nights before the collection, binge-watching Ferrari videos on Youtube. It felt like all of my childhood yearnings & love for Ferrari was finally fulfilled.

Driving it off the showroom was actually very scary; despite coming from the SW20 MR2 (dubbed widowmaker), it was raining heavily & the aircon was out.

So I had to handle the windows fogging up like crazy with the intense growling sound of the V8 engine behind me; not that I could see anything anyway, the whole car was one giant blind spot.

I could hardly see where I was going, and parking the super-wide Ferrari wasn't easy, plus managing the F1 gearbox is next-level stuff.

I stalled the car, could you believe it? Soon after, I sent the Transmission Control Unit (TCU) to the UK to tune the F1 Gearbox Sluggishness for custom transmission software. I was expecting a learning curve, but not like this, and it was really an eye-opener.

It was also hard to believe, as I kept asking myself, "Is this really my car?" for a good six months.

I see you’re also in the Ferrari Club SG. How is it like being in such a prestigious club, and what’s your role there? 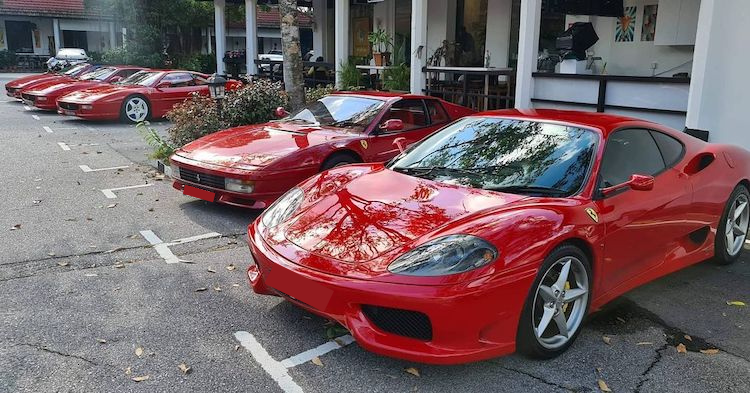 It was insane. The first event I went to felt like a scene from Crazy Rich Asian, joining a whole group of Ferraris parking outside the Fullerton Hotel for the Chinese New Year Lou-Hei (pre-covid measures).

I am very, very honoured to be nominated as a Committee Member of the club and contribute as a Social Media representative. I’ve always enjoyed making things pretty.

What activities are there in the Ferrari Club? 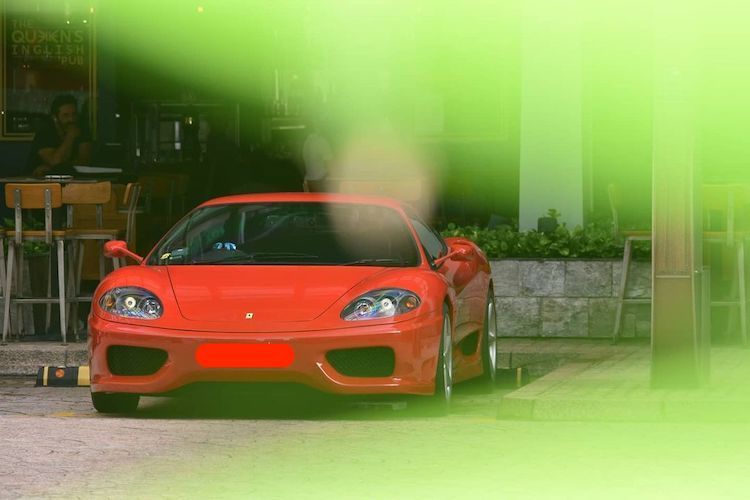 We basically dine, gather, drive & have all sorts of fun.

The FOCS aims to be the best club in Singapore, and I think we are close with the list of activities we do.

How did you get into cars, and what was your earliest memory of it? 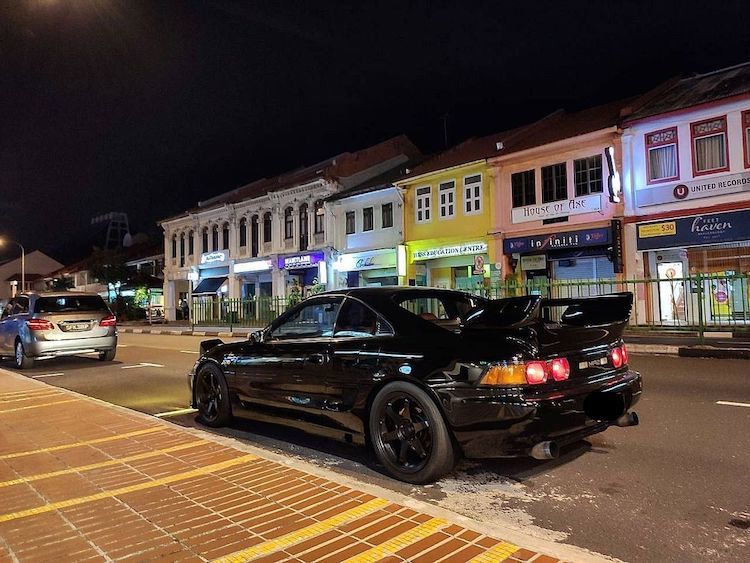 I got into Hotwheels, Model Diecast, Wangan Midnight Maximum Tune & Initial D arcade games, RC 1:10 scale cars during my childhood. When I was 23 years old, I bought my first 1:1.

You used to own a Toyota MR2 and called it the "Blackbird", why so? 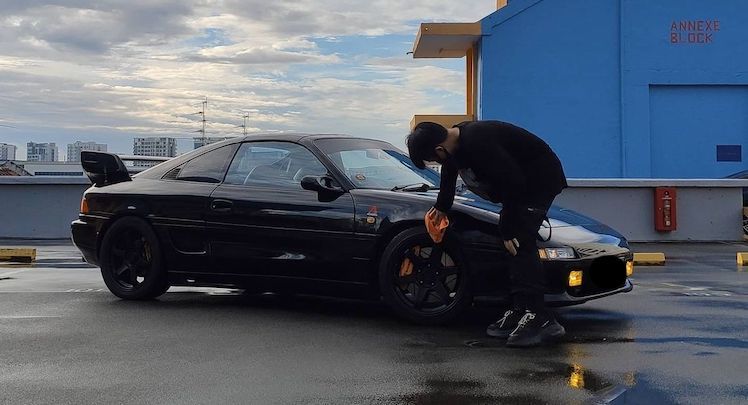 It was a multi-layered name! I paid tribute to the Original "BlackBird" from Wangan Midnight Japanese manga, an early Porsche Turbo with huge wings. Subsequently, I modified the exterior & interior, intending to create the most beautiful OEM+ MR2 on the planet that kind of looks like the Porsche Turbo.

The Blackbird Project began to gain fame & popularity in the local car scene as well as the worldwide MR2 community! I spent a fortune on that car; the rear wing itself was a $5000 piece.

That video you did for your Blackbird was amazing. What was the story behind it for those that don’t know? How was the whole shoot for you?

I had to do a proper tribute & send-off for my first love, so I hired a talented team to film the cinematics and concept I had in mind.

Trying to capture the story & legend of the Blackbird MR2 was a homage to the Initial D & Wangan Midnight memories from my childhood. I'm glad that the shoot went really well; it was one of the final moments I had with the MR2 that consisted of an emotional & intense 13 hours shoot.

How are the differences between all three cars, were there things you liked and disliked about each?

I haven't driven the 458 enough to compare it with the MR2 & 360; the two older cars are really charming; it’s a sense of occasion every time I start their engines.

Both cars were passion projects, where I tried to perfect whatever I disliked about them. I enjoyed taking my time to restore/customizing them (legally) more than driving them fast like conventional petrolheads.

I really loved driving manuals, and the popup lights are a thing of beauty, so that's what I liked about the MR2.

Whereas the 360 brings the purest pride & joy. I grin like an idiot just getting into the Ferrari. There’s nothing much that I really disliked about them both, they are very different cars at the end of the day. You guys need to experience them!

Would you rather Continental Cars or Japanese Cars? Why? 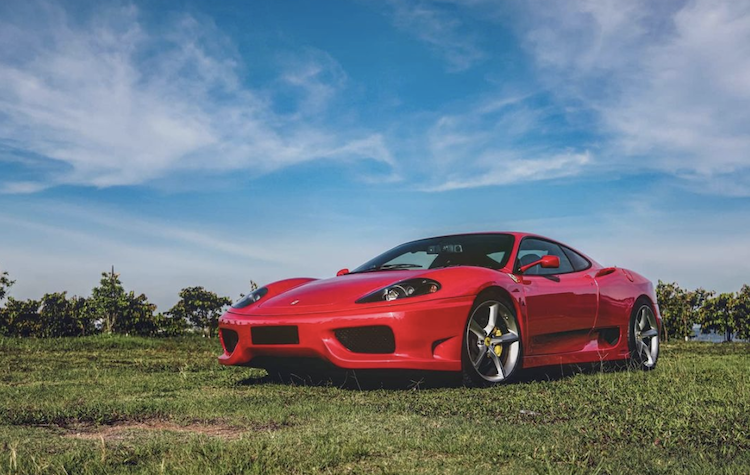 As of now, Italian. But I have to admit I want to own more than 5 cars so that I can have a bit of each. Luckily my wife is one of those rare gems that gave her support & approval!

Although your Ferrari is a recent purchase, would you consider buying another car in the future? If so what would it be? 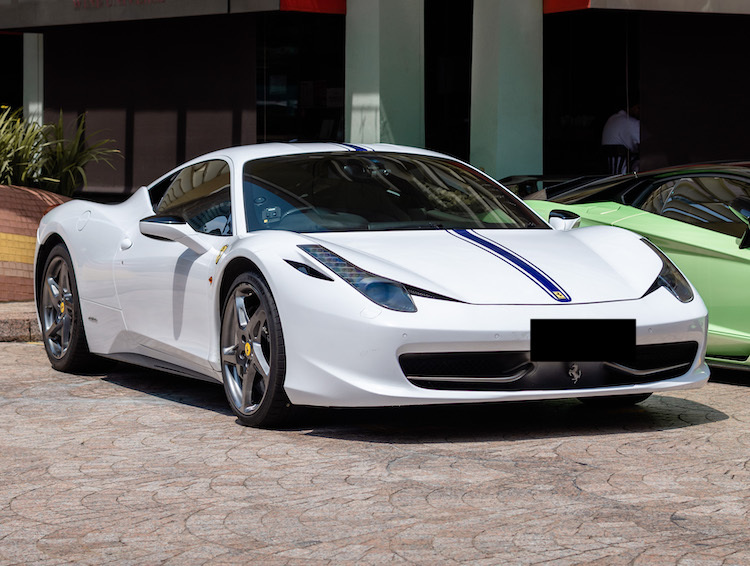 I actually just did a few days back! Happy to announce that Project LISA has just begun!

If we’re talking about my future plans - in the short term, I am looking at a second project car - the upcoming Nissan Proto Z & in the longer term, I hope to achieve my first hypercar!

If you looked back in time, would your younger self ever imagine owning these beautiful cars? 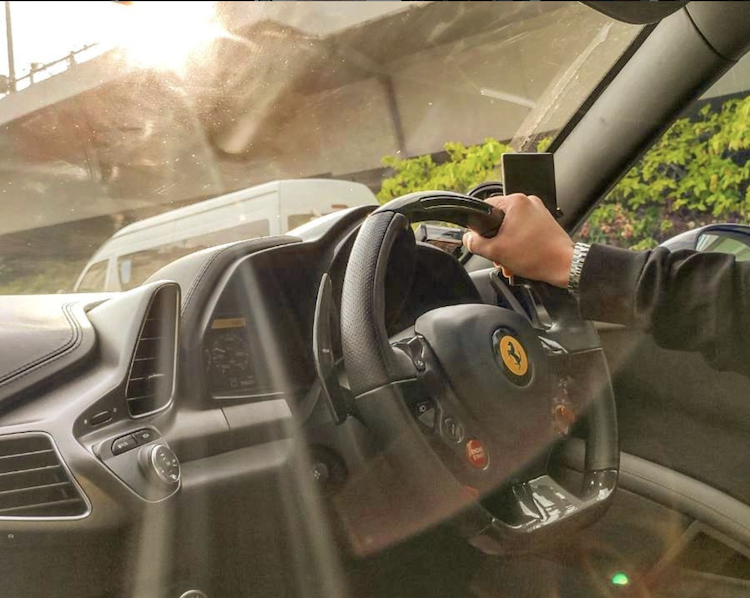 To be honest, I always wondered about stuff like that, but never in my wildest dream, did I expect it like this! 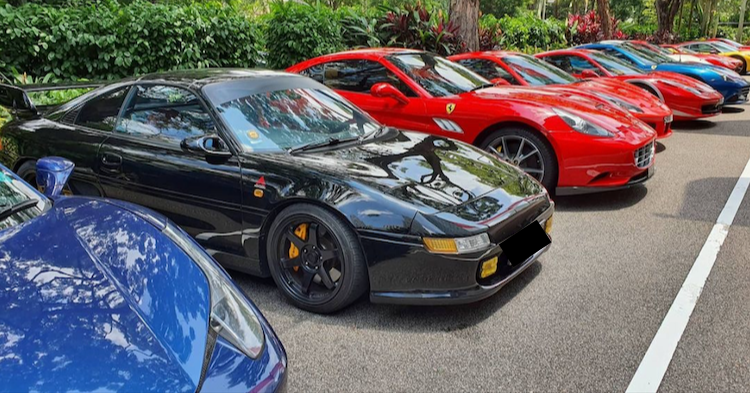 It's generally not much as compared to other countries, due to our smaller population, sky-high prices & our very strict laws. However, we car lovers in Singapore are a real passionate bunch, cars here cost as much as 10X more than other countries & yet all of us here find ways to dote on our rides, one way or another (especially older cars).

As a petrolhead, I don’t feel good hearing about upcoming EV trends, but there’s very little I can do as an individual. I just hope they don’t outright ban combustion engines, I might consider migrating if that happens!

All in all, the community is not too bad, really. Personally, I hope to contribute positively to the car scene in Singapore & share my passion as a car enthusiast!

To stay in the loop of Issac and his adventures with his new Ferrari 458, click the link here. To see past pictures of his Toyota MR2 and Ferrari 360, we linked them as well!