In The Passenger Seat: Kittypompypom, A Flexible Dame and Her Dark Knight 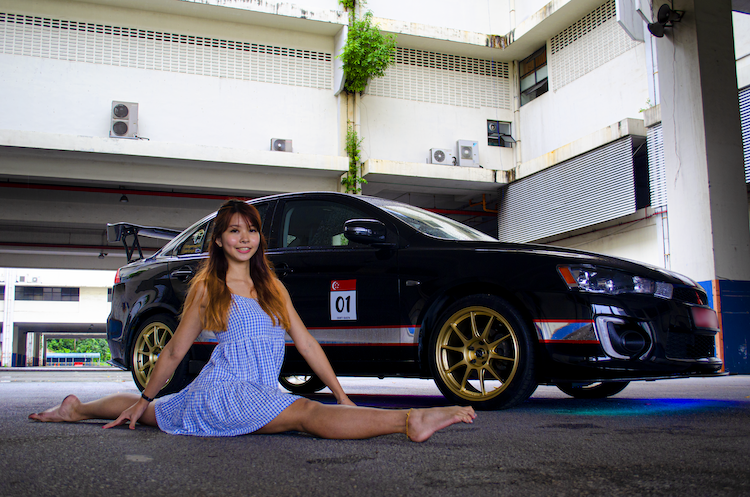 This dame needs no saving. She has already found her “Dark Knight”. In this episode of In the Passenger Seat, we find out more about Kittypomypom and her iconic status in the SG Car Scene.

Kittypomypom is a car enthusiast who needs no introduction. She is widely known in the local automotive scene for her insane yoga poses and splits, juxtapose with her black Mitsubishi Lancer EX 1.6A. She has kindly allowed us to share more about her signature poses, as well as the mods on her vehicle.

First off, can we get your name, age and occupation? 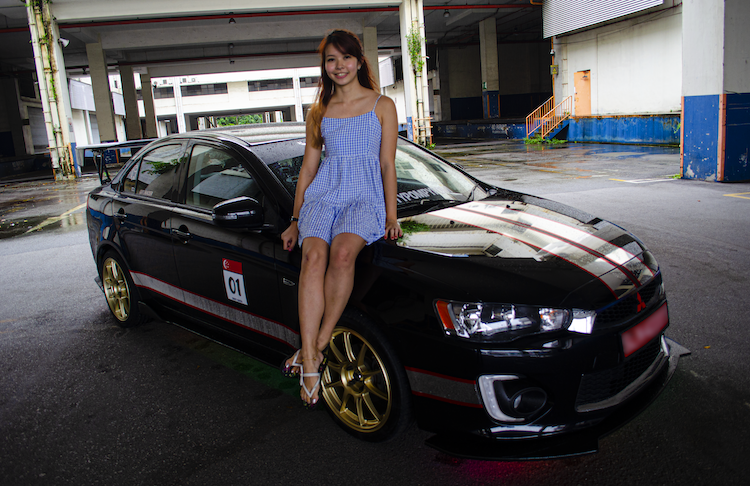 People in the car community know me as Kittypompypom. I’m 26 this year and I am working as a Credit Control Analyst. I also teach piano, violin and yoga!

For the people who don’t know, what car are you driving now and what’s the story behind it? 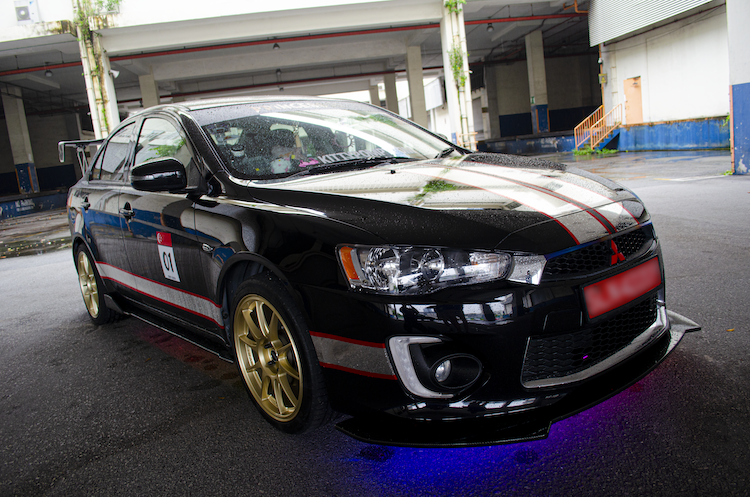 I drive a Mitsubishi Lancer EX 1.6A (2016 Model, facelift version). I got this baby just 4 months ago. I have always adored the looks of the Lancer EX and EVO X (especially EVO, since young).

However, due to budget constraints and also taking into account the maintenance, as well as the wear and tear, the Lancer EX was a much affordable option for myself.

The Lancer EX is known for its affordability and is a dependable compact sedan. I love the LED daytime running lights, LED taillight and the ring of chrome that surrounds the grill.

When you finally got the keys to the Lancer and took it out for its initial spin, what thoughts were running through your mind? 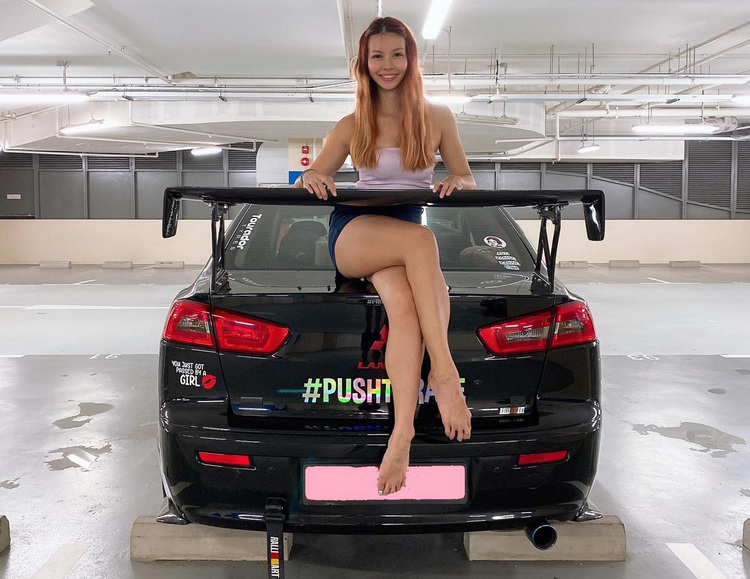 I was so excited about finally owning my first car. I felt a little teary-eyed the moment the keys were handed over to me.

How did you get into cars and what was your earliest memory of it?

At the early age of 5 or 6, my father used to drive the family around for frequent car meets/convoy drives to Malaysia, so I guess my interest in cars began from there.

In between car rides, my siblings and I would point out and identify the various car models we see on the road.

Since young, I was also already attracted to cars with wings, and I told myself, someday I want my dream car to have wings too!

Also, during my secondary school days, I used to frequent arcades just for the Initial D and Maximum Tune games.

On Instagram, you’re known for your split + car combination photos. How did it come to that? 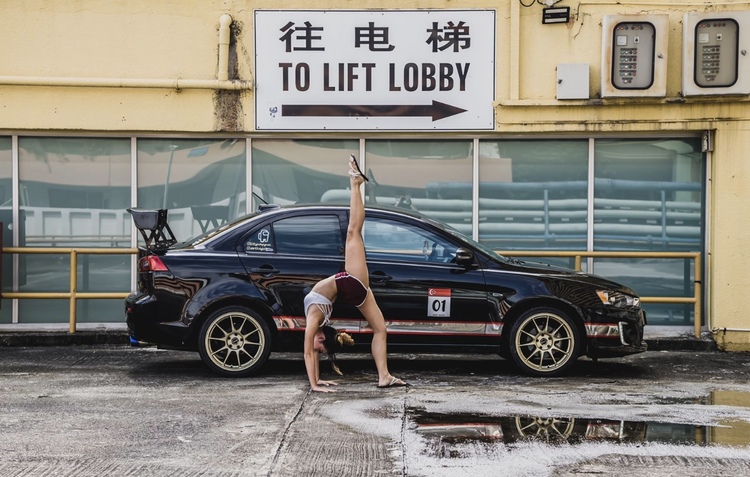 Prior to getting my car, I’ve always been posting yoga poses on my page. Now that I have my car, I thought it’d be quite special to try out different yoga poses together with my car.

Your car is named the “Dark Knight”. Is there a story behind it? 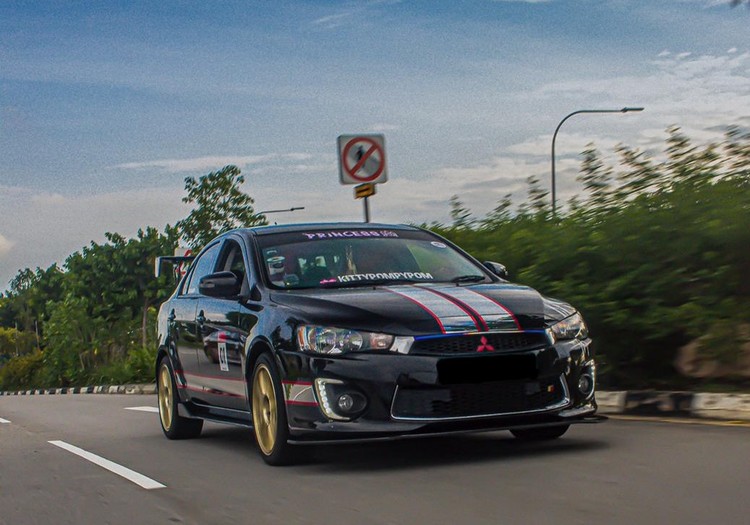 Actually, a friend of mine in the car community came up with the name on the day I collected my car. Credits to my Mini Cooper friend for this!

He called it “a knight in shining armour” because of my chrome racing strips.

You’re pretty well known in the SG Car community and your car gets spotted often. How does that make you feel? 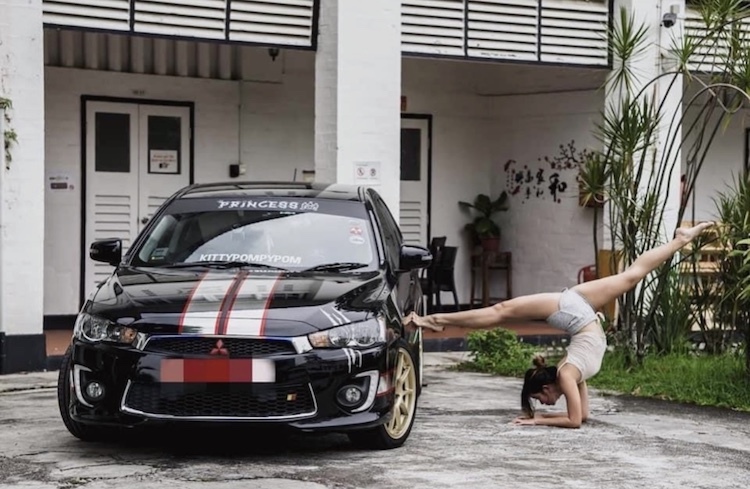 It feels nice to have people spotting my car on the road. It means my car probably stands out because of the decals and GT wing, affirming my efforts and the time spent on my car.

I even saw a meme made after me!

We’re sure with such a presence in the community, you get both positive and negative comments passed at you, how do you deal with it? 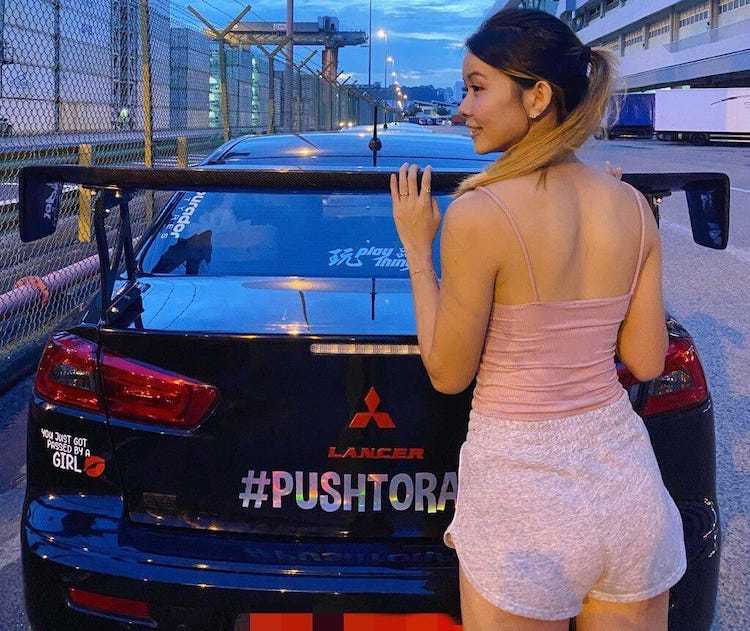 I always welcome both positive and negative comments! I’m really thankful for positive ones especially those who praise my car and effort. It just further assures me that the effort and time spent these few months were worth it.

However, negative comments do not come directly to me. I always hear them from my friends.

I saw this quote from an article, “having negative comments can be complimentary, if someone is taking valuable time out of their personal life to go after you, you possess something worth having. Jealousy is the best form of flattery”.

Any thoughts of the next car after the Lancer? If so, what?

Yes! Initially, it was an Evo X (my dream car as a child). However, due to its high depreciation cost, I’m having second thoughts.

Also, I’m thankful to my #Toyota86 friends who inspired me with all the beautiful modifications they did on their cars.

A two-door car will probably be on my list next. Either a Toyota86 or CopenGRSport!

Would you rather drive a Continental Car or Japanese Car? Why? 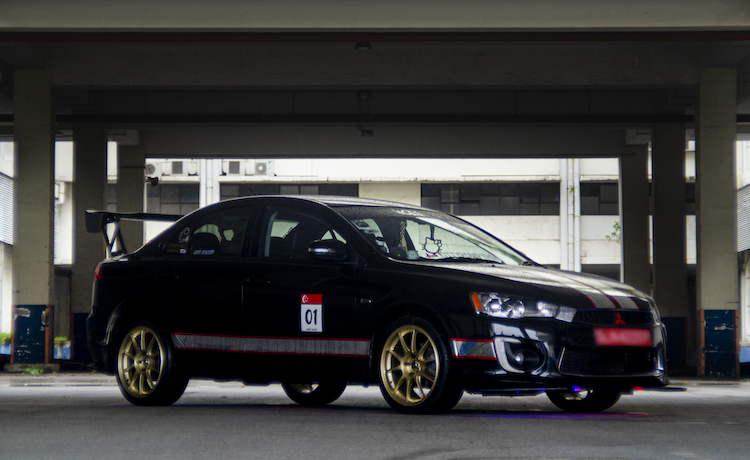 Japanese cars definitely. They are known for their efficiency and reliability and are also more generally affordable in terms of road tax and import duties. Not only are they now more fuel-efficient and environmentally-friendly, but repairs and spare parts also won’t cost a bomb, as compared to Continental cars. Furthermore, Japanese cars are much easier to maintain and their parts can be easily acquired in Singapore.

However, every car brand in the automotive industry has its own unique selling point. In my personal opinion, it still depends on the individual, lifestyle and budget.

Your car doesn’t look stock, what mods have you done to it? Could you list it out?

I wanted an aesthetically appealing modified car, while also adhering to the safety standards and regulations of the LTA. Therefore all my mods are solely aesthetic in nature.

For the exterior, I installed aftermarket rims and tyres, decals and vinyl wrap, roof diffuser, and my favourite mod of all, a GT Wing. These were all done within the first two months of owning my car.

I’m planning to install an air intake, suspension and brake system next! 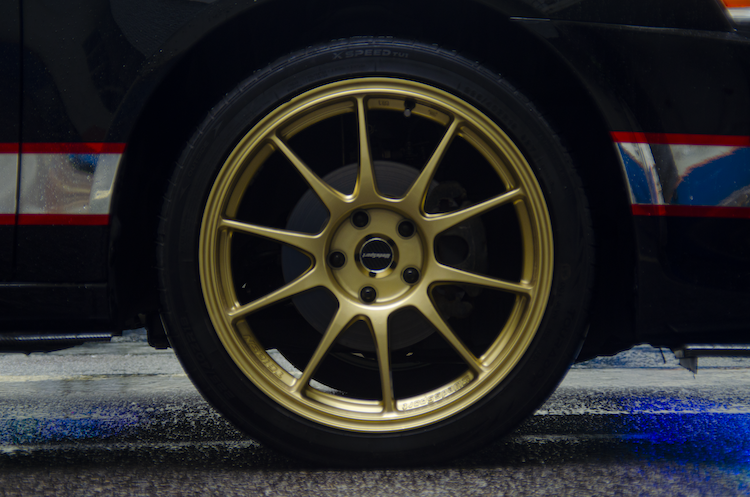 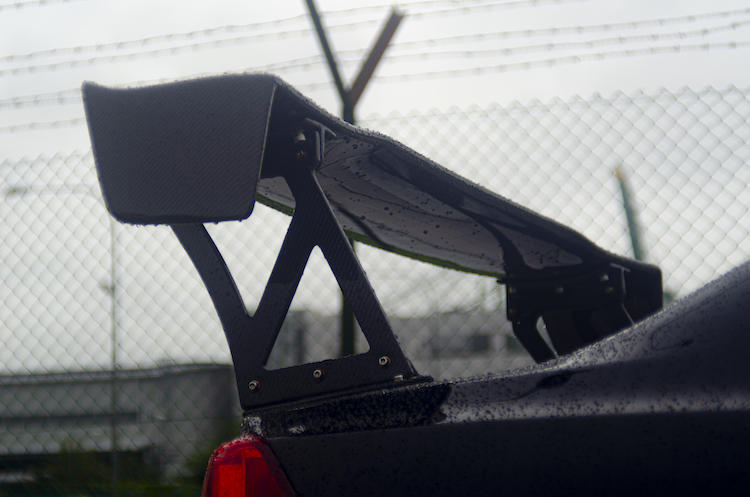 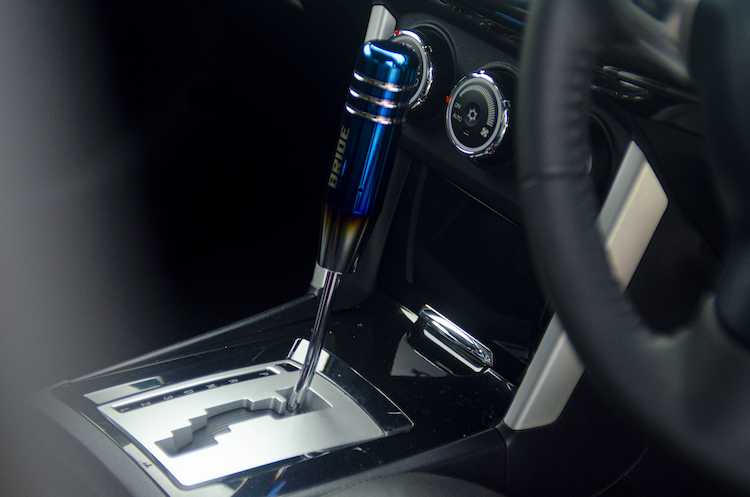 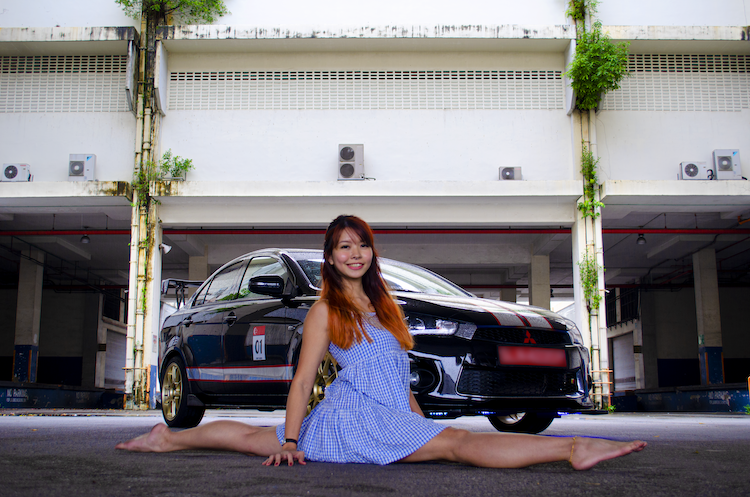 The passion and culture for vehicles are steadily dwindling away from its former glory years and the entry barrier for car enthusiasts has risen over the years due to high import duties and taxes, numerous limits and restrictions on vehicle ownership.

Recently, many car owners and photographers have taken their passion to Instagram by documenting their rides. It’s really heartening to see more owners do so.

We occasionally tag each other in challenges to feature our cars so we can admire our rides. Shoutout to #SgCarCulture :D

If you’re interested in finding out more about Kittypomypom and her personal life, click here. For more of her adventures with her Dark Knight, click here.

This interview has been edited and condensed

Did you know we have a Motorist Telegram Channel? Created exclusively for drivers and car owners in Singapore, you can get instant info about our latest promotions, articles, tips & hacks, or simply chat with the Motorist Team and fellow drivers..