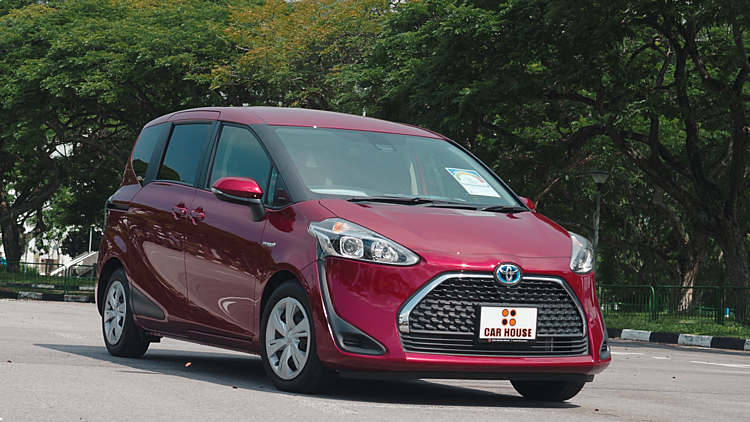 Want a spacious, fuel-saving MPV that makes no pretences about what it is? Look no further than the Toyota Sienta Hybrid!

Multi-Purpose Vehicles (MPVs) nowadays tend to be embarrassed about what they are--just look at the many seven-seaters that try to masquerade themselves as a Sports Utility Vehicles (SUVs).

The 2019 Toyota Sienta Hybrid makes no such pretence. At first glance, it looks like an overstyled bread toaster on wheels. If you look at it from up front, you may be tempted to think that Toyota's designers simply took a Stormtrooper's helmet and scaled it up. And if you look at the Sienta's side profile, you may think that its design was inspired by a children's orthopaedic shoe. 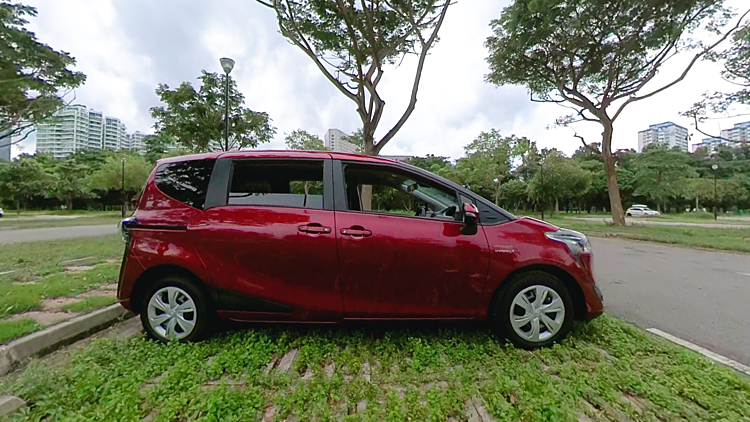 But we should probably stop making fun of the Sienta's unfortunate appearance. After all, it is a best-seller in Singapore, and there must be some reason for it being so popular with the Private Hire Car community. 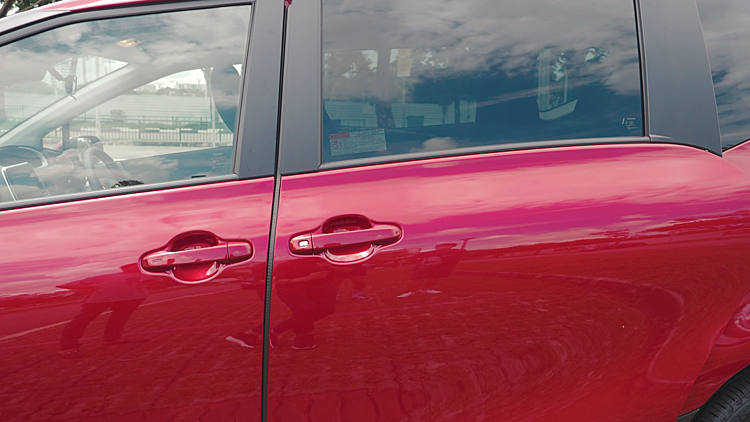 Although the slick keyless entry system means you probably won't need to take your key out of your pocket, you may be tempted to do so any way, because there are two dedicated buttons on the key which control the rear left and rear right doors respectively. Press and hold on the button, and the electrically-operated rear sliding door glides open silently. 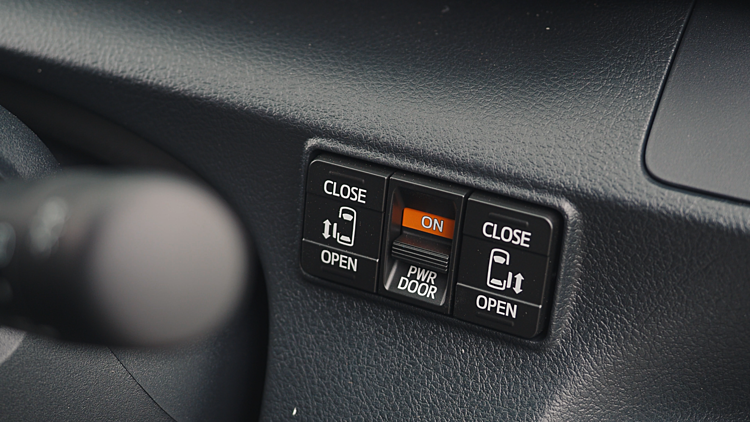 And how many ways should there be to operate these doors? Toyota thinks the answer should be three--first, they can be controlled remotely through the car's key, second, they can be activated through a control panel accessible to the driver, and of course, the doors can be operated using the rear door handles.


The power doors open to a roomy second row, which treats its occupants to 926mm of leg room, which is just about the same as that in a BMW 5-series luxury saloon! 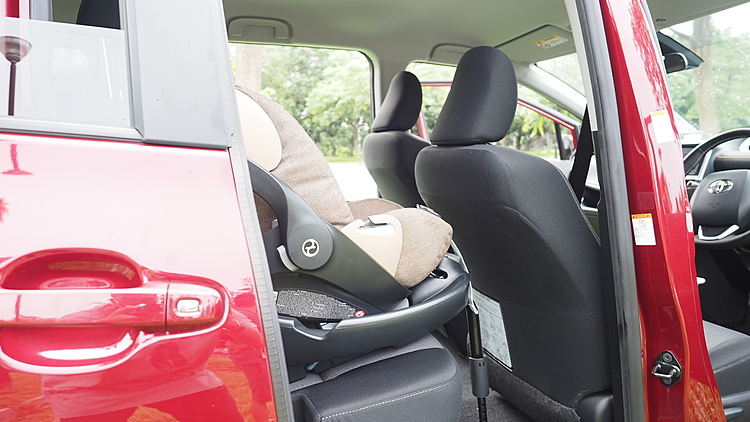 Installing child seats is thus a doddle with the Sienta Hybrid; furthermore, it is equipped with two ISOFIX anchor points in the second row, which means that you can equip your car with two child seats.

However, we still have some gripes about the second row of seats. 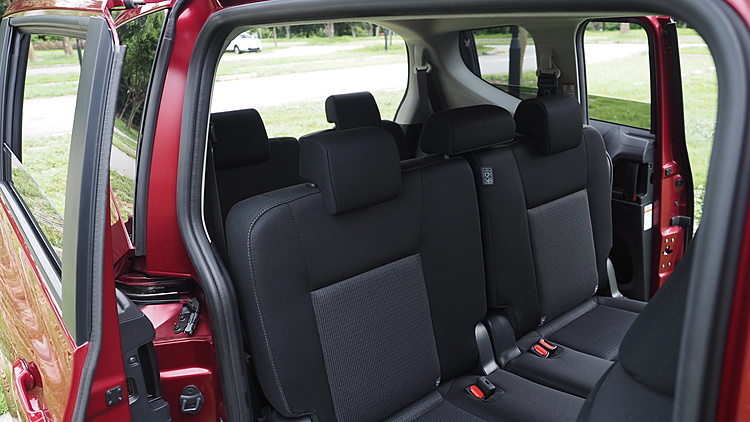 The bench seat is split-folds in a 50:50 configuration, which means that the occasional middle-seat passenger may get the sensation that the crack on his posterior has magically extended past his rump and up his entire back.

Furthermore, the design of the 50:50 split-folding seats also means that there is no centre armrest, which would be acceptable if side armrests could be found on the rear doors. However, the rear sliding door design necessitates that no armrests can be installed on the door.

These are all minor gripes, though, and do not detract from the fact that the Sienta Hybrid's second row of seats is supremely practical and spacious. 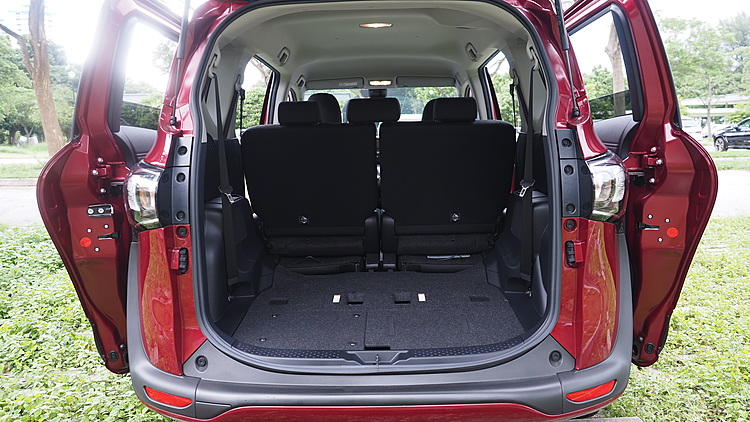 The car's comically boxy dimensions also means that in its five-seater configuration, it is still capable of a cavernous 507l boot capacity, which can be further expanded to a whopping 575l of flat floor space when the second row of seats are folded away too.

At this point, the keen-eyed reader may realise that something is amiss. The Sienta Hybrid is marketed as a seven-seater, but where is the third row of seats?

Toyota's ingenious designers have employed some origami trickery to fold the third row of seats underneath the second row when they are not in use, so that your cargo space is not compromised when you do not require the third row.

Pull another tab located at the back of the folded-down third row seats, and they will spring up and lock themselves into place.

This tumbling-over and bouncing-up is not activated by any cumbersome and expensive-to-replace electric motors; rather, these mechanisms rely on just springs and clever Japanese design! 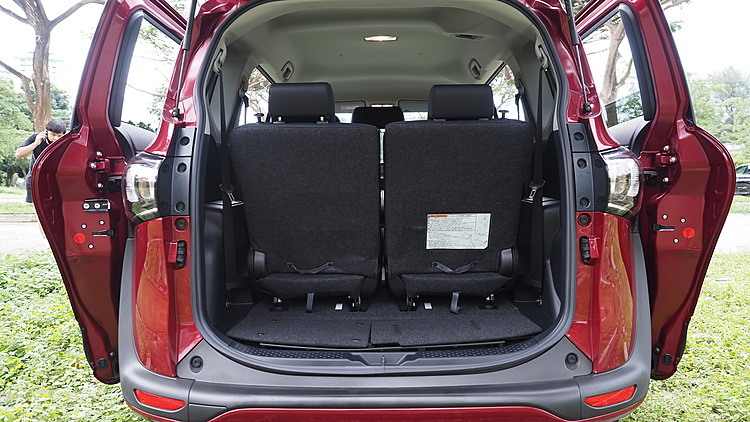 Entry and egress into the third row is also extremely easy due to the tumble-down second row seats, which eliminates the hassle of climbing over or squeezing through the second row.

Once you're in the third row, expect to have your knees touching against the second row seat back. It isn't uncomfortable, but it's just a tad squeezy. 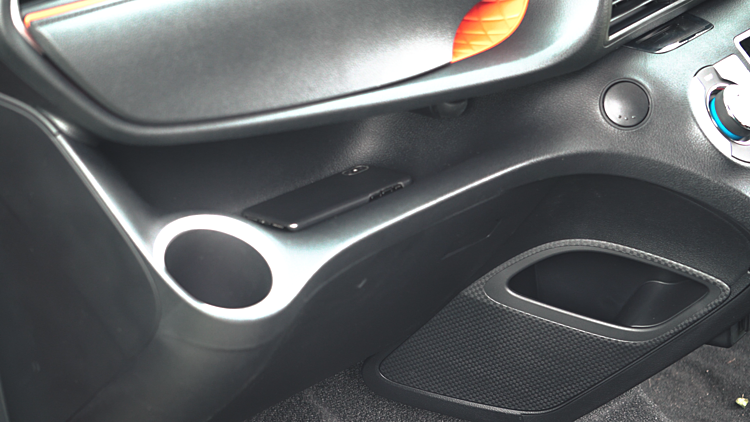 Although the Sienta Hybrid lacks a centre console between the driver and front passenger seats, it makes up for it by having an additional storage space above the glovebox. Additionally, it also comes with a flip-around hook embedded in the dashboard, which will be sure to come in useful when you're looking for somewhere to hang your teh tarik.

The Sienta Hybrid is surprisingly nippy off the line, thanks to the electric motor in its hybrid drivetrain providing a total of 169nm of torque, which is more than what conventionally-powered 1.5l cars can muster.

It is literally only nippy right off the line, though. If you're stopped at a traffic junction, other cars will already be overtaking you by the time you have passed through the junction.

Step hard on the accelerator pedal and you won't be rewarded. Instead, you will be greeted with a constant and loud drone from the engine--a classic characteristic of Continuously Variable Transmissions (CVTs). With only 97hp on tap, the acceleration you actually get is disproportionate to how hard you're depressing the pedal, and the corresponding drone the car's drivetrain makes.

It comes without saying that the car is absolutely gutless on the highway, and even careful planning may not grant you a sufficiently long window to conduct any overtaking manoeuvres. Cars were still gliding past the Sienta Hybrid even when this writer had already put the pedal to the metal!

Best to activate the cruise control system and drive the Sienta Hybrid in a more relaxed state of mind then. 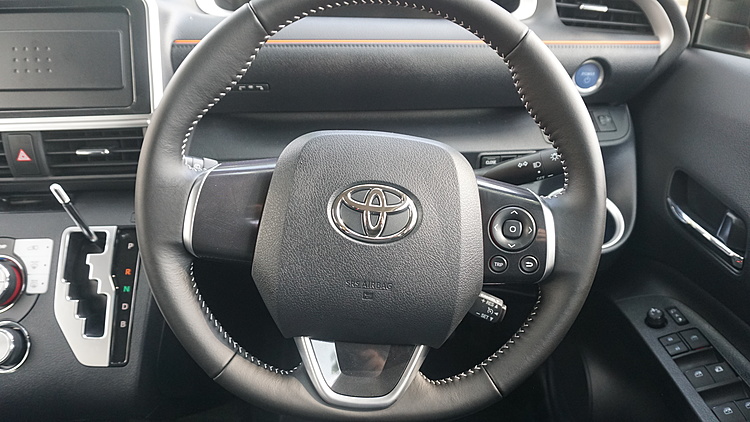 If you do choose to drive it in a more relaxed pace, you will enjoy a smooth ride through and through. From a gentle and smooth acceleration, to a suspension that glides over bumps like you're on a cloud, the Sienta Hybrid is in its element as a comfortable family van if you choose to drive it smoothly.


Sound insulation is good as well, with road and wind noise kept to a minimum. The car tends to become a bit boomy at highway speeds, although this is an unfortunate reality that all box-shaped cars face, since there is much more space within the cabin for noise to bounce off. 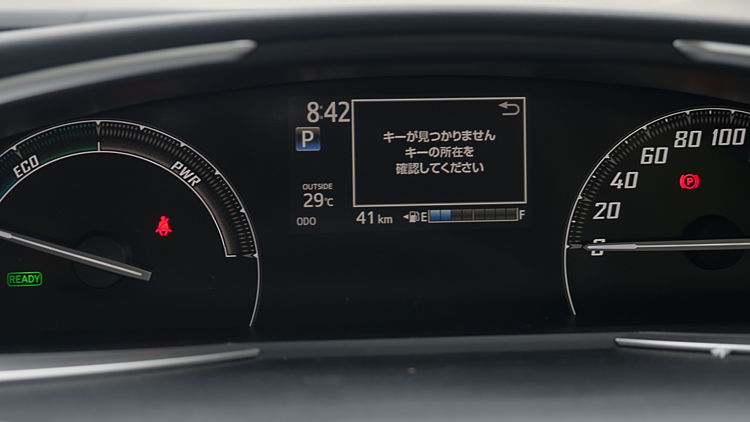 Apart from the space it offers, another trump card that the Sienta Hybrid holds is its fuel consumption. Despite full-throttling the car during the test drive, an 18.5km/l fuel consumption figure was still achieved! This makes the advertised 27.2km/l figure seem very realistically attainable.


Despite its lacklustre power and acceleration, the car's leather-wrapped steering wheel actually provides some modicum of feedback, even though it is overly-assisted by the electric power steering.

The Sienta Hybrid's all-round disc brakes are powerful, linear, and very sensitive, with a strong initial bite. This is no small feat, considering that the brakes on hybrid vehicles usually come with non-linear brake feel, due to their regenerative braking systems. 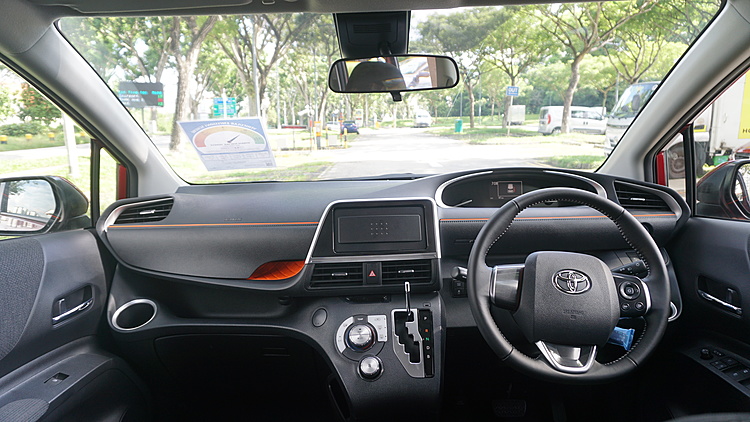 Considering that it is a seven-seater MPV, the Sienta Hybrid is extremely easy to place and manoeuvre. It turns on a dime, with a turning radius of just 5.2m, which is no more than that of an average compact hatchback.

The Sienta Hybrid's boxy dimensions also benefits the driver with a large greenhouse space, making it easy to see out of the car, and minimising blind spots. Try saying that about one of those SUV-pretending MPVs!

In terms of ergonomics, the driver's seat is very customisable, allowing for major adjustments even for seat height. The steering wheel adjusts for rake, but not reach, although that is not a big problem due to the very customisable seating position. 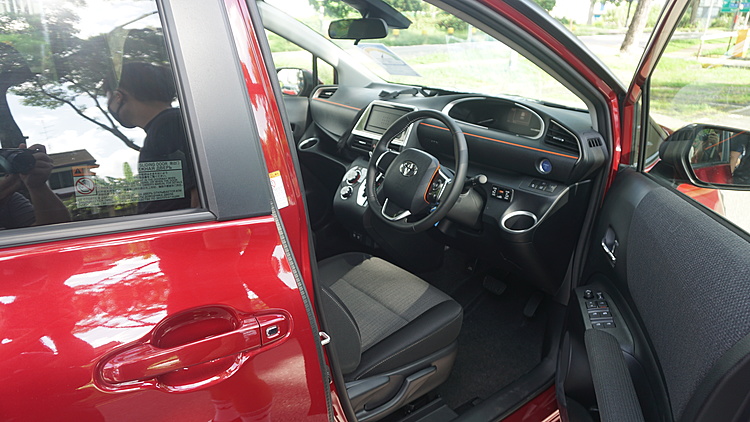 The Sienta Hybrid comes with Toyota Safety Sense, which means it is equipped with lane keeping assist to ensure you don't unintentionally veer out of your lane. 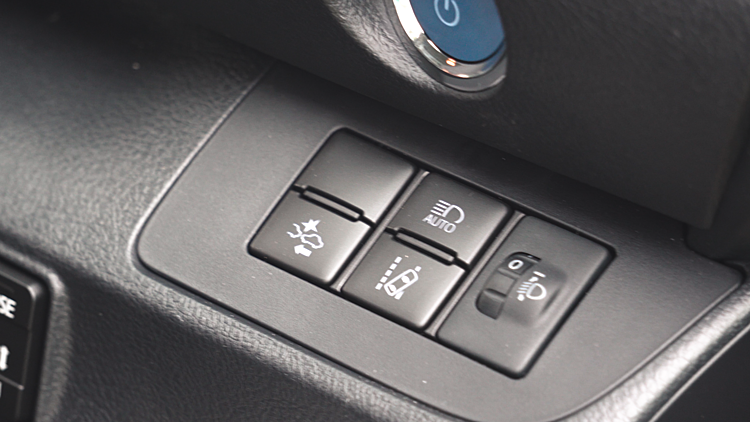 The system also has a pre-collision warning system, which will also brake for you to prevent any potential accidents. 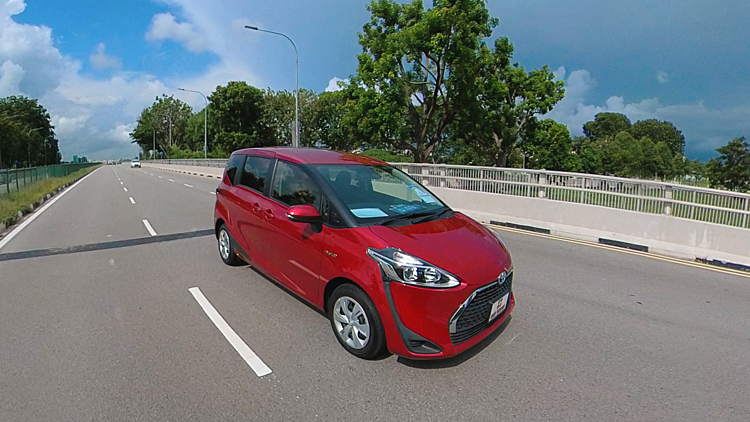 Most people have a bad impression of the Sienta Hybrid because they judge it on benchmarks that it was never intended to achieve, nor pretended it wanted to achieve.

The Sienta Hybrid does not pretend to be powerful, sporty, or stylish. All it aims to be is a practical family and cargo hauler, and it isn't ashamed about what it is either.

In an era when hatchbacks and MPVs all pretend to be styled like SUVs, the Sienta Hybrid is a refreshing option for the responsible family person that just wants a cheap, fuel efficient, and safe car to ferry their family around.

At just S$92,988, and packed with safety features and electric doors, the Sienta Hybrid delivers excellent value and then some for families.

*The observant reader may notice that the test car is missing its gear knob and centre infotainment screen. These will be installed before the car is delivered to owners, along with leather seats. Tricia
I often find guys are gender biased in relation to cars. Please stop making comments such as its a girl's car... In fact, I saw Sienta drivers all are males including some of my neighbours. When motoring is concerned, there are just too many pre-conceived ideas about women. In this day and age, many guys are still ultra old school, belittleing women driving nice fancy cars... They will have all the says about women drivers - blabber mouthing, due to own inferiority complex.
Like Reply