Inconsiderate Drivers of the Week: Episode 66 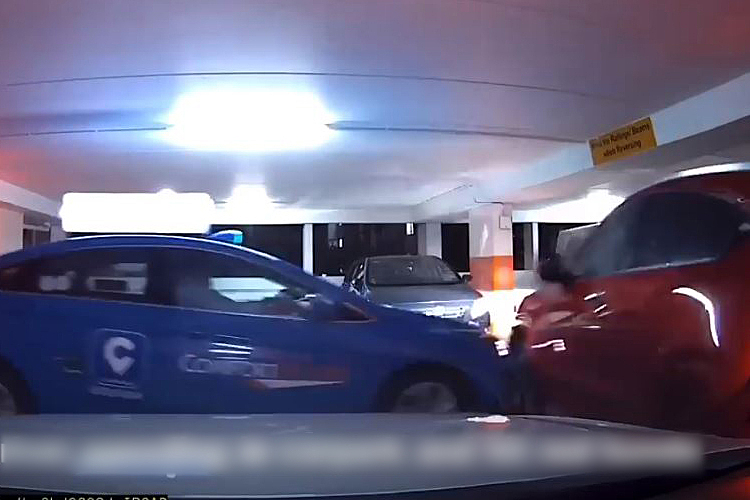 In this episode of Inconsiderate Drivers of the Week, we feature carpark accidents, pick-ups at junctions and reckless driving due to "priorities".

1. Driver Rushes Through Carpark Exit to Top Up Cashcard

Multi-storey carparks always have two gantries – one for entering and one for exiting. Each gantry has its own purpose and drivers should use these gantries only for that purpose. Using the gantry for its unintended purpose could endanger other motorists.

The video above shows the camera car about to exit the carpark when a white Renault drives through the exit, cutting in front of the camera car. Good thing the latter stopped, if not a collision may have occurred.

As the camera car turns, we see that the driver of the Renault has gotten out of his car and is topping up his cashcard. This kind of reckless behaviour just for such a trivial matter should really not be tolerated.

2. Taxi Stops in the Middle of a Junction to Pick Up Passengers

Usually, at a junction, there is a yellow box painted on the road, which indicates that you’re not allowed to stop in that box. It is an area for cars to turn in or turn out, especially at junctions at shopping centres or other buildings. So of course, a junction is definitely not a place to pick up passengers.

The video shows a taxi driver helping a couple load their luggage into the boot of the taxi, while in the middle of the junction. The couple has their bags on the sidewalk, which is some distance away. When they cross over to take the bags, vehicles turning in have to stop so they don’t hit the couple.

They continue loading their bags for about a minute, leaving the vehicles behind the taxi, including the camera vehicle, waiting at a standstill. While we understand the taxi driver is just trying to make a living, it was a very inconsiderate and dangerous thing to do by picking the passengers up at a traffic junction. We really hope we don’t see this kind of behaviour on the roads anymore.


When it comes to big, heavy vehicles, we all know that they have blind spots, which can make it hard for a driver to spot oncoming traffic. However, we’ve stressed many times that drivers should always stay alert and make sure the coast is clear before making a turn.

We don’t know if the drivers just didn’t keep a lookout for oncoming traffic or if there’s a bigger story. We just hope that both drivers are okay.


If there’s one more thing to be afraid of, it’s vehicles flying out of a multi-storey carpark. As comical as that sounds, any heavy object falling from a height can be considered as “killer litter”, which is something all of us should steer away from. So, just take a quick look up if you ever walk beside a building, just to be safe.

This video’s action takes place on the second level of the carpark, right above the gantry. The camera car begins to drive into the gantry but then stops short; we assume a loud noise was heard. Although, it was a good idea to stop as barely two seconds later, a red car ploughs into a stationary bike, sending its parts flying over the railing and onto the ground in front of the gantry.

While the video states that the driver at fault is a female, it is hard to tell from the video itself and therefore, we will not assume the driver’s gender. However, we are shocked at how fast the driver was driving to have impacted the bike like that.


Speaking of carparks, it is really dangerous to speed inside one. Yes, we know everyone wants to find an empty lot as fast as possible, but that is no reason to speed. Carparks are usually quite small, which means you’d be speeding in an enclosed, narrow area, which is dangerous for both you and other motorists.

This video shows a red Honda parking beside the camera car. The Honda then drives back out a bit to correct his parking position, but it is during this time that a blue taxi, driving really fast, collides with the side of the Honda. The rest of the video shows the respective drivers taking pictures for their insurance claims.