Inconsiderate Drivers of the Week: Episode 64 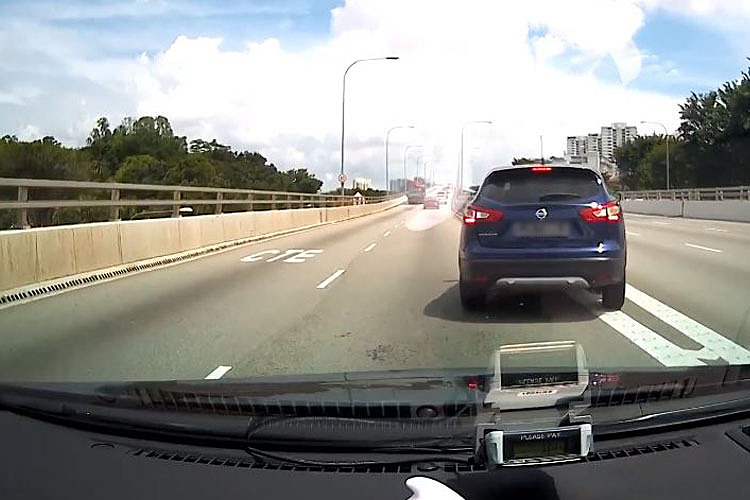 In this episode of Inconsiderate Drivers of the Week, we feature selfish drivers, ignoring chevron markings and a PMD-related accident.

1. Audi Cuts Over Chevron and Nearly Hits a Biker

Signalling before switching lanes is vital on the roads, but just because you signal does not mean that every other vehicle has to give way to you. You should always stay alert and wait for the lane to be clear before you change.

The video above shows a white Audi nearing the exit. Wanting to turn into CTE, he signals, cuts over the chevron and accelerates in front of a biker on that lane. The Audi hits the bike’s front wheel, but good thing the biker was able to keep control of his vehicle.

In the future, all motorists should be more considerate and not think they’re entitled just because they switched on their turn signal.

2. Lexus Doesn’t Check For Traffic Before Turning Out


Many drivers forget to check their blind spots before turning or switching lanes, which can end up resulting in horrible accidents. Sometimes, natural elements like trees or rain can block our view as well. In these cases, motorists have to pay more attention.

The video above was taken by a camera bike. As he rides forward, soon we see a black Lexus, which was helpfully pointed out by a red circle. We see the Lexus then turn out onto the road without any regard for oncoming traffic. Luckily, the cam bike swerved out of the way in time.

While it is possible that the tree might have blocked the Lexus driver’s view of the bike, we feel that he should have still tried to pay more attention to the roads. Motorcycles are smaller vehicles and we should always keep a lookout for them.


There are times when we travel the wrong way, but that’s an honest mistake and it’s okay. What’s not okay are drivers that switch lanes randomly just to get into the “correct” lane, just like the Nissan driver in this video.

We see a blue Nissan travelling on the lane towards Toa Payoh, but he only realizes that he’s going the wrong way when he nears the chevron that separates the road into two exits. He then signals and cuts in front of the cam taxi.

Due to the road dividers, the Nissan was unable to fully cut over the chevron, hence he stopped, which caused the cam taxi to stop as well. According to the video’s description on Facebook, the cam taxi got rear-ended due to the Nissan’s inconsiderate driving.


Personal Mobility Devices (PMD) have become a very controversial topic in Singapore, with many Singaporeans thinking that PMD riders are dangerous. The video above might spark some controversy, but let’s take a look at the clip.

The video shows a blue Nissan waiting at a zebra crossing. He has overshot the stop line, which is already an offence. As the cars in front of him drive away, the Nissan starts to move as well, but he doesn’t see the PMD approaching him.

5. Audi Gets Hit by Volkswagen Who Was Switching Lanes


Here we reiterate it again – just because you signal does not mean that you are entitled to switch lanes! We understand that sometimes when you get into jams, you want to switch lanes for a faster journey, but you should always check that the roads are safe first.

The video above shows a grey Volkswagen turning out of the queue without checking for oncoming traffic, which resulted in him colliding into the side of a black Audi. Unfortunately, the cam car drove away before we could see the aftermath of the accident.

We hope that the Audi driver is not injured from the impact, and that the Volkswagen driver will learn to be a little less impatient.