Inconsiderate Drivers of the Week: Episode 62 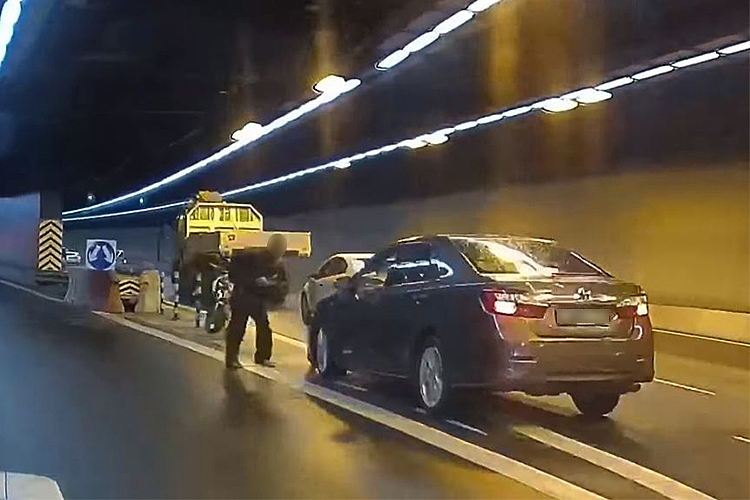 In this episode of Inconsiderate Drivers of the Week, we feature reckless driving in rainy weather, a hit-and-run and a dangerous tunnel incident.

1. Taxi Swerves at the Last Minute, Knocks Down Biker

As we’re undergoing a monsoon season, there’s a lot of rain during the month. Heavy rains make roads slippery and hard to navigate in, making driving even more dangerous.

The video above shows a red taxi suddenly coming out of its lane, colliding with a biker. The biker then loses control of his motorcycle and falls off the bike, rolling over into the next lane. A white van, thankfully, swerves in the nick of time, barely missing the fallen biker.

An add-on to the dashcam footage shows the aftermath of the incident, showing an ambulance at the scene. We also see the fallen bike and the taxi. We’re wishing the biker a speedy recovery.

2. Driver Fails to Park and Commits a Hit-and-Run


Such a common sight these days – hit-and-run accidents committed at car parks. Just because the driver isn’t there to collect your information after an accident doesn’t mean you can run away. There are cameras everywhere these days!

If you accidentally hit another vehicle in a parking lot, don’t run away. Someone in the area will have dashcam footage of the incident, and this will not look good for you when they make claims against you. Instead, leave behind your contact so they can arrange settlements with you.

In this video, a blue car is seen driving in the opposite direction, on the same lane as the camera car. With his quick reflexes, the driver of the camera car swerves into the next lane, missing the blue car. Luckily, there was no collision.


There are many things to note before driving into tunnels, such as entering in a certain lane, especially if you’re aiming for a certain exit. Check out our article on tunnel safety to make sure you stay safe in these areas.


The video above shows a Toyota entering the tunnel in the second lane, but realizes he has to exit. So, he turns on his signal and wants to switch lanes, but due to vehicles in that lane, he’s unable to switch in time.

Attempting to cut into the exit lane, the Toyota crashes into the barrier, approaching a biker who was standing there. The biker reacted quickly and moved out of the way just as the car hit the barrier.

Next time, it’s best to wait to for the next exit instead of ploughing through barriers.

The video above shows a Trans-Cab taxi wanting to switch lanes without checking, which resulted in the camera car having to hit the brakes, barely missing the taxi. This doesn’t deter the taxi, but instead seems to anger him.

A few seconds later, we see the same taxi speeding and squeezing in between two cars in front, sending a spray of water. This kind of driving is really dangerous. The taxi could’ve crashed or, worse, caused an accident.