Inconsiderate Drivers of the Week: Episode 52 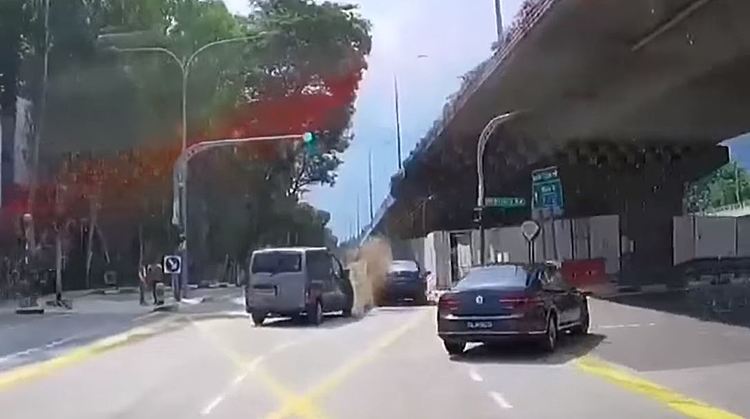 In this episode of Inconsiderate Drivers of the Week, we feature a chain collision caused by tailgating, incorrect lane switching and a taxi running a red light at a traffic junction.

When switching lanes, drivers have to be mindful of their surroundings – meaning that they have to look out for fellow motorists around them and to confirm that the roads are clear before making a lane change. Yet, so many drivers switch lanes recklessly.

In this case, while the taxi is the one that nearly crashed into the camera car, he is not entirely at fault. In the video above, you can see a white car turn at the junction and suddenly stop in between two lanes. The taxi, acting fast, switches lanes to avoid colliding into the white car.

However, the taxi driver’s quick thinking nearly caused him to crash into the camera car. You can hear the passengers inside the camera car are shocked by the sudden action, but luckily the driver was alert enough to stop in time.

2. Tailgating Results in Chain Collision on the Expressway


This is a case of why tailgating is a bad road practice. It is truly an unfortunate event that could have been easily avoided. Let’s break down this incident.


The video above starts off with several vehicles driving normally on the expressway, but watch the white car on the right. As the camera car drives further forward, you can see the white car slowing down due to an accident. However, a van, which was tailgating the white car, could not slow down in time. The van eventually collides into the white car, causing it to bump into the black car in front, and so on, resulting in a chain collision.

As mentioned previously, this incident could have been easily avoided if the drivers gave themselves ample space while driving. Accidents can happen anytime, and giving yourself some distance with the car in front could prevent a chain collision from occurring.


When you are on a right-turn lane, you turn right. You don’t drive straight or turn left; you follow the direction of the arrow!


The driver of the grey car in this video didn’t follow this rule, though. In the video, the grey car is blocked by another car, but you can still see the accident happening. The grey car decides to go straight instead of turning, even though he’s not supposed to do that on a right-turn lane.

This causes the Nissan to crash into the grey car as it is turning. From the video, the collision resulted in a cloud of smoke, and it looks like one of the vehicles’ tyre rims fell out. Let’s hope that neither driver was injured, and that the cost of damage to the vehicles isn’t too bad.


Double white lines are lines that inform drivers that no lane changes can be made, at least not until they merge into a single line or dotted lines. Yet, some drivers don’t regard this rule and switch lanes whenever they please.


In the video above, the camera car is driving behind a cyclist on a one-lane road, when they reach a road bump. The Infiniti driver gets impatient and proceeds to overtake the van in front of him, possibly because the van was slowing down for the bump, and this causes the Infiniti to cross the double white lines in an effort to overtake.

This makes the Infiniti shift closer to the cyclist, who, thank goodness, reacted quickly and swerved to the left in order to avoid the car. If it wasn’t for the cyclist’s quick reflexes, a horrible accident would have occurred.


Here we have another accident caused by another reckless driver trying to beat a red light. The perpetrator was a Comfort DelGro taxi driver who was speeding up to run the red light, even though the lights for the other side of the junction had changed to green and traffic had started flowing.

This behaviour caused the taxi to collide with the back of a Mercedes that was driving straight. Although the impact doesn't appear to be that damaging, this incident was definitely unnecessary, and could have been easily avoided if the taxi driver were more patient.