Inconsiderate Drivers of the Week: Episode 48 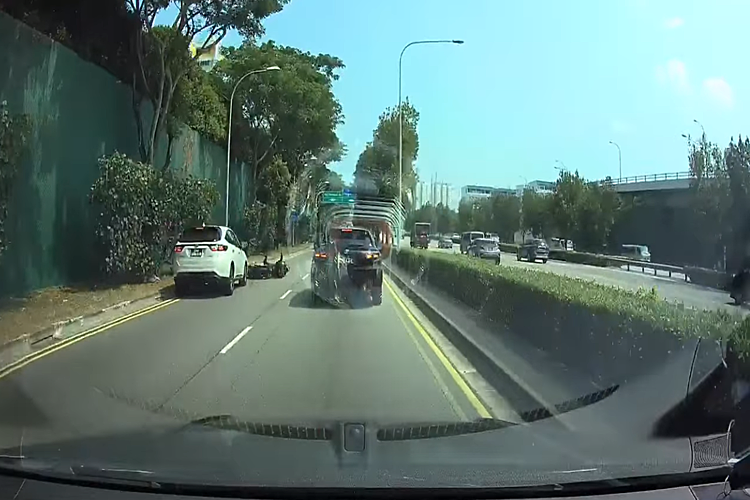 
In this episode of Inconsiderate Drivers of the Week, we feature drivers speeding, engaging in road rage and driving indecisively on the road.

Adhering to traffic safety rules while on the road is paramount for motorists. Not doing so will endanger your own life as well as others, in addition to causing hassle that could have been avoided. As seen in this video, being aware of your circumstances is important as well, as it can help you avoid accidents whenever possible.

In the video above, a biker is seen to clip the black Toyota Harrier in front of it. The impact of the crash causes it to skid into the next lane, where it gets pinned by the white Harrier as seen in the footage. Fortunately, fatal injuries have been avoided.

While on the road, conflict often becomes inevitable due to clashing mindsets and mistakes made. That being said, it is vital that we always keep our composure and never succumb to our emotions. Engaging in road rage may seem helpful in the short term but can be damaging to our future in the long run.

The driver of the van then descends from it and approaches the driver of the camera car in an aggressive manner. Thankfully, the conflict had been resolved before it could escalate any further.

3. Biker Knocked Into From Behind By Car

When behind the wheel, it is absolutely imperative that we have all of our senses on constant sharp alert. Even if you're exhausted, not keeping track of what’s around you while driving can result in an accident, or worse. If you find yourself unable to stay alert and aware of your surroundings at the end of a long day, it would be preferable to take public transport instead.

In the footage obtained above, it can be seen that a car is speeding at the next lane, resulting in it ramming into the back of a motorcyclist. The motorcyclist then skids and falls over at the force of the collision.


The roads are a shared public space, and thus as road users we have to be considerate of others. It is our duty as citizens to ensure that our actions in a public space do not inadvertently harm other motorists. Doing so reflects poorly on us as people. In addition, it betrays the lack of regard we have for traffic safety rules.

In the above video that has been widely circulated, a black Mercedes is seen to embark onto a lane and clearly drive off against the traffic flow. When confronted about her actions, the driver exits the vehicle and behaves in an aggressive manner. It is then evident that slightly before being confronted, the driver of the Mercedes had similarly yet again driven recklessly against the traffic flow, knocking into a traffic signal box and almost colliding with pedestrians.

Driving against the traffic flow is dangerous, as it increases the potential of collisions especially on a road as busy as the one seen above. Repeatedly doing so shows a certain lack of consideration for other motorists, whose lives we are endangering. The latest update we’ve received is that the driver of this Mercedes has been arrested for drunk driving.

Indecisive driving while on the road has led to fatal accidents before. It jeopardizes the lives of motorists around you and increases the likelihood of accidents occurring. Being considerate of your fellow motorists and sticking to a single lane will go a long way in helping your drive become much more of a pleasant one.

It is also imperative that we moderate our speed while in close contact with other motorists. Speeding, as well as indecisive driving, has led to major accidents on the road before. We may be in a hurry, but it is better to avoid a trip to the hospital and risk being late to our destinations.

In the video above the camera car is seen to head into a tunnel. A white car in front of the camera car almost switches over to the next lane before switching back. As a result, a motorcycle from behind the white car collides into it, incurring minor injuries and damage to his vehicle.