Inconsiderate Drivers of the Week: Episode 44 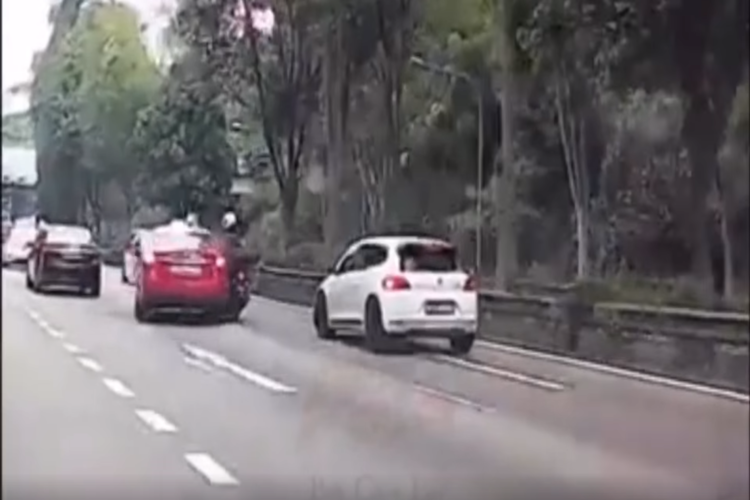 
In this episode of Inconsiderate Drivers of the Week, we feature drivers who run the red light and change lanes without checking for approaching traffic.

In the video above, the camera car heads down a road when it stops in front of a silver cab that had been driving against the traffic flow. As a result, the silver cab stops as well, before reversing and driving off in the correct direction of the traffic.

As road users it is absolutely essential for us to observe traffic safety rules. Not doing so is a disservice to other drivers with whom we share the roads. Traffic rules have been instated for a reason, and not respecting them could result in conflicts with our fellow drivers, or worse.

In this video, the green Audi is seen from the dashboard camera to head on down the road despite the red traffic light blinking.

It is useful to note that traffic rules apply all the time. Even if it's late at night, when there’s no one around, traffic rules should still be followed. We must exercise our own discipline and avoid taking too many liberties with traffic safety even at odd hours, as accidents can occur any time.

As with the earlier video, in this footage seen above the camera car is seen to stop at a red traffic light. The driver of the Nissan pickup beside the camera car decides to disregard the red light and drive forward anyway.

4. Taxi Swerves On Lane And Collides Into Motorcyclist

Not checking before swerving on the lane risks the lives of everyone around us. While on a shared public space like the roads, it is important to ensure that there is no approaching traffic before swerving. The alternative could be disastrous, as seen in the footage above.

In this video obtained by a dashboard camera, a red taxi is seen to have been tailgating the car in front of it. The driver of the taxi therefore swerves on the lane to avoid an accident. As a result, it ends up knocking into a motorcyclist that had been beside it, who is then sent skidding down the road.

5. Red Mercedes Turns Into Lane Without Checking For Oncoming Traffic

Similarly, when turning into a lane, we should not assume that the coast will always be clear. Turning without checking to see if there is approaching traffic can be catastrophic, resulting in damage to both your vehicle or others. Waiting just a little longer for a clear lane will save you from the pain of having to get repairs.

In the case of a collision indeed occurring, the onus should be on us to stop and help all the parties involved. Not doing so reflects badly on us as members of a community. If an accident has been the result of our own misdeed, it is our responsibility to ensure that all affected individuals are taken care of.