Inconsiderate Drivers of the Week: Episode 39 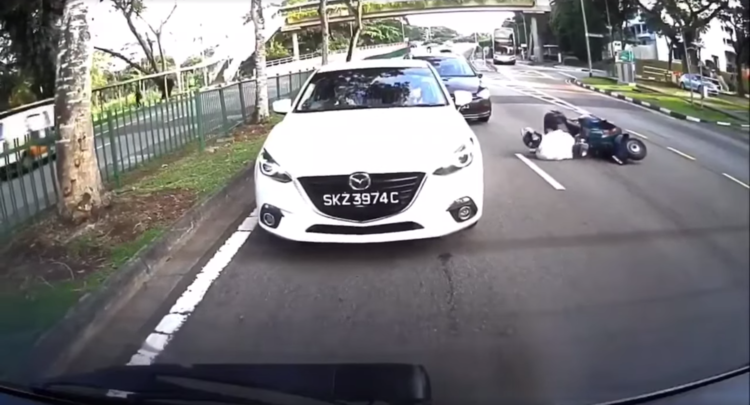 In this episode of Inconsiderate Drivers of the Week, we feature another reckless Transcab driver, Mercedes drivers running red lights and cutting chevrons, and an impatient Honda driver.

Looks like Transcab taxi drivers are to continue with their reputation as the most dangerous taxi drivers on the roads, with videos of them engaging in reckless driving constantly popping up online.

In the video, the camera car is travelling on a two-way road in an industrial area with the left lane on both sides filled with parked heavy vehicles. As the camera car is about to turn right, a Transcab suddenly appears from the right, the other side of the road, and cuts in front of the camera car at a high speed.

Luckily, the camera car was not going at a high speed and was able to stop in time to avoid a collision. Following the near-miss, the Transcab driver just speeds off and slowly filters back to the left side of the road.


At discretionary right turns, drivers are required to exercise good judgement and make the turn only when the other side of the road is clear of traffic.

In this video, there is a queue of vehicles waiting to turn right at a traffic junction. At the front of the queue, a silver Honda driver proceeds to turn right, leaving the turning pocket. But the road was not clear, and the front of Honda clips the side of a taxi, causing it to spin right and jump the kerb to the other side of the road.


When changing lanes, you not only have to check for approaching traffic in your chosen lane, you also need to make sure that there are no motorcyclists riding on the lane divider and/or in your blind spot.

In this rear camera video, there is a build-up of traffic following a flyover on the first lane, and the car behind the white Mazda decides to move over to the second lane. However, at that very moment, there was also a motorcyclist riding on the lane divider.


The title says it all. In this video, we can see the camera car leave a housing estate and waiting at a traffic junction. When the lights turned green, the car moves off and proceeds to turn right.

Suddenly, a Mercedes appears from the left, having beaten the red light. Luckily, the camera car driver notices the approaching Mercedes and brakes in time to avoid a collision.

5) Mercedes Driver Can’t Make up Mind on Expressway, Weaves in and out of Chevron


When driving on expressways, it is more important than ever to remember or decide where you want to exit way in advance as indecisive driving while everyone around you is driving at high speeds can lead to serious consequences.

The Mercedes driver begins to signal and filter to the left, presumably to take the exit leading to the MCE. But the driver took too long to filter left and ends up cutting the chevron in front of the camera car, forcing the driver to slow down.

But suddenly, the Mercedes driver changes his mind in the middle of the chevron and begins to signal and move right. Thus, the camera car driver had to swerve quickly to avoid clipping the back of the Mercedes.

Download the new Motorist app now. Designed by drivers for drivers, this all-in-one app lets you receive the latest traffic updates, gives you access to live traffic cameras, and helps you manage LTA and vehicle matters