Inconsiderate Drivers of the Week: Episode 37 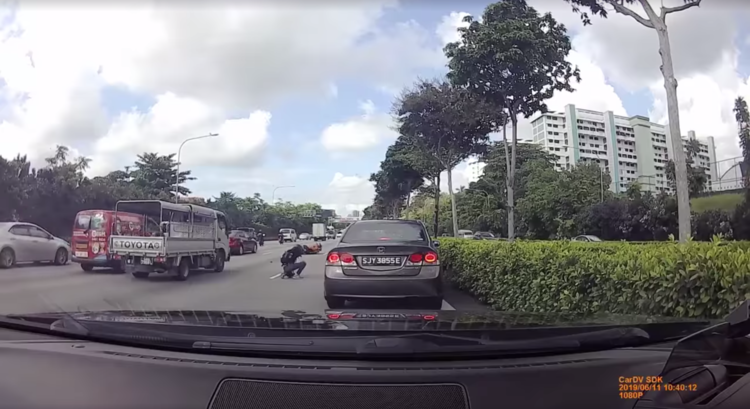 In this episode of Inconsiderate Drivers of the Week, we feature a few motorcyclists lane splitting, crashing into each other and getting sideswiped.

Sometimes, accidents on the roads are not just the fault of one party, but rather two or more parties acting recklessly.

In this video captured by a rear camera, a Gain City Van can be seen changing lanes on an expressway without signalling. Farther behind, a motorcyclist can be seen lane splitting and weaving in and out between vehicles.

The motorcyclist can then be seen approaching the back of the van, but the next time we can see the motorcycle is when the video pulls out, revealing the fallen motorcycle behind the van, which has since stopped.

Presumably, the motorcyclist crashed into the back of the Gain City van because of the reckless actions of both parties.

2) Lorry Driver and Motorcyclist Changes Lane at the Same Time, Crashing to Each Other


Again, we showcase how the reckless actions of a driver and a motorcyclist can result in terrible consequences.

In this video, we can see slow-moving traffic on an expressway. The camera car, which is on the right lane, captures a motorcycle pasting on the left and weaving into a gap in the second lane. At the same time, a lorry begins changing lanes, going from the third lane to the second in that same gap.

As a result, the motorcyclist collides with the lorry. Luckily, the driver in front of the camera car reacts in time and brakes to avoid hitting the fallen motorcyclist.

3) A Group of Motorcyclists Ride Together Recklessly, Resulting in a Minor Collision Between Two of Them


Usually, when people think of accidents involving motorcycles, they automatically assume it was a collision between a motorcycle and a bigger vehicle, like a car.


The chevron markings and double white lines are on the road for a good reason, to force lane discipline to control the traffic flow, which is especially important at merging lanes.

In this video, we can see a Toyota Camry driver riding very closely to the left on a one lane road. Ahead is a merging lane, with chevrons and double white lines at the merging point for safety.

As the Camry approaches the merging point, it begins to ride on the chevron, and following that, the double white line. Because of that, the Camry hits a motorcyclist coming in from the merging lane due to the lack of space for the latter.


In Singapore, and in Malaysia, you are only allowed to make a U-turn from the extreme right lane. By doing it on any other lane, you place the motorists in the lanes to your right at risk of colliding with you.

In this video, we can see a Malaysian Honda car in the second lane, a straight-only lane, at a traffic junction. Suddenly, the driver signals right and proceeds to do a U-turn from the second lane. This is despite the fact that there was another car in the first lane whose driver was very considerate, giving way to the Honda, thus avoiding a collision.