Inconsiderate Drivers of the Week: Episode 36 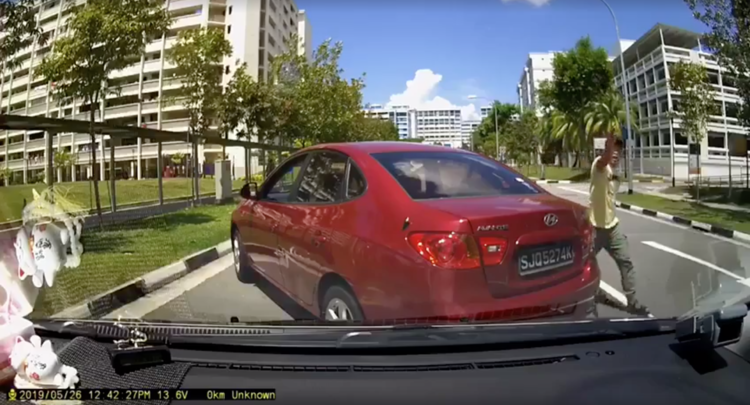 In this episode of Inconsiderate Drivers of the Week, we feature more drivers going the wrong way and a hit-and-run driver who struck a parked car.

1) Black Honda Stream Driver Travels on Wrong Side of Road


For some reason, this trend of driving on the wrong side of the road is here to stay.

From what can see, the road was divided by a raised curb so the Honda driver would not have been able to correct his or her mistake immediately. But the video also revealed a gap in the divider ahead, giving the Honda driver a chance to switch over to the right side of the road safely.

In this video, we can see a red Hyundai Avante making a right turn at a traffic junction just when the cars on the other side of the road move off after the green light flashes. At the same time, the Hyundai driver barely misses an elderly lady crossing the road when the green man was flashing.

Passing the Hyundai farther ahead, the camera car driver reportedly honked at the driver (no audio available) as a warning to his actions. Following that, the Avante driver who was planning to turn right, proceeds to give chase and cuts in front of the camera car, causing a collision between both cars.

From the video itself, we can tell that the Hyundai driver was extremely angry when he stepped out of the car, and this is despite the fact that he was largely in the wrong.


Usually, when you see two drivers road raging against each other, it usually means there was an incident that occurred prior to one, or both of them raging against the other. But in this case, it was apparently an unprovoked incident of road rage.

The video resumes to normal speed at a pedestrian crossing. After the lights turn green, the camera car driver moves off. While travelling on the extreme right turn, a white Toyota car suddenly appears from the camera car’s right and squeezes past. Following that, for some unknown reason, the Toyota driver decides to play the “braking game” with the camera car.

Thankfully, the situation defused itself with the camera car driver choosing not to escalate the problem but to just drive behind the Toyota driver in the safest way possible before parting ways.

4) Honda Airwave Driver Crashes into Parked Car in a Carpark, Drives off Without Taking Responsibility


Most drivers see the usefulness in a dashboard camera in the car, capturing physical evidence while on the road to back up claims where it would be one’s word against another’s without it. But a dashboard camera is also useful when your car is parked, to capture crimes and irresponsible drivers in carparks.

In such cases, the right thing to do is leave a note on the car’s windshield with your phone number admitting responsibility for the damage. What this driver did instead was drive off without leaving a note.

When approaching a zebra crossing, drivers are supposed to slow down, and stop and give way to pedestrians waiting to cross and pedestrians crossing halfway.

In this video, the camera car driver is stationary on the left of a zebra crossing waiting for a lady and a young girl to cross the road. Just as there were almost halfway through, a black Honda Vezel appears on the right lane and just drives right through without regards for the pedestrian.